A delight for the seasoned collector, as the details of the Master Ultra Thin Tourbillon Moon outshine its complexity

We have already presented the 2020 vintage of Jaeger-LeCoutre’s Master Control series, and noted the fine details which make the new iteration of a real classic collection stand out (if you look closer, that is): the slim bezel and the large dial opening, the eggshell structured and the coloured dial with the applied JLC logo, the lateral brushed half side of the hands.

The tourbillons within the series did not yet get the design upgrades, but instead a new member joins their rank, and what a newbie this is – enter the new Master Ultra Thin Tourbillon Moon: 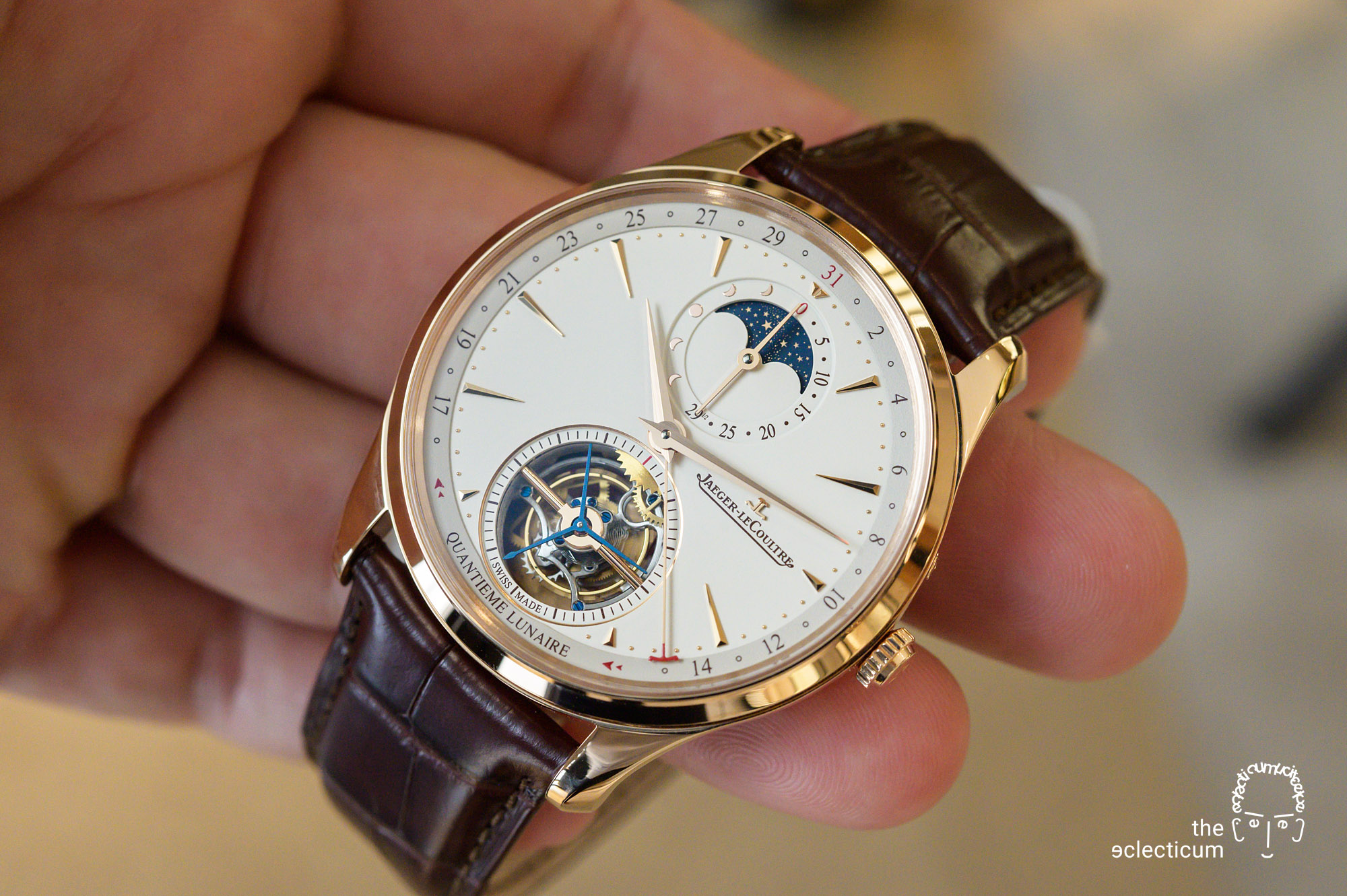 The tourbillon at 6 o’clock is now nicely counterbalanced by the richly detailed moonphase display at 12, yet still retaining a slight bottom weighted appearance of the entire watch. This new display shows the phase of the moon on both hemispheres (as moonphase disk and as pictograms/age of the moon dial), and is complemented with a pointer date – using the ‘JL’ theme from the logo as index. 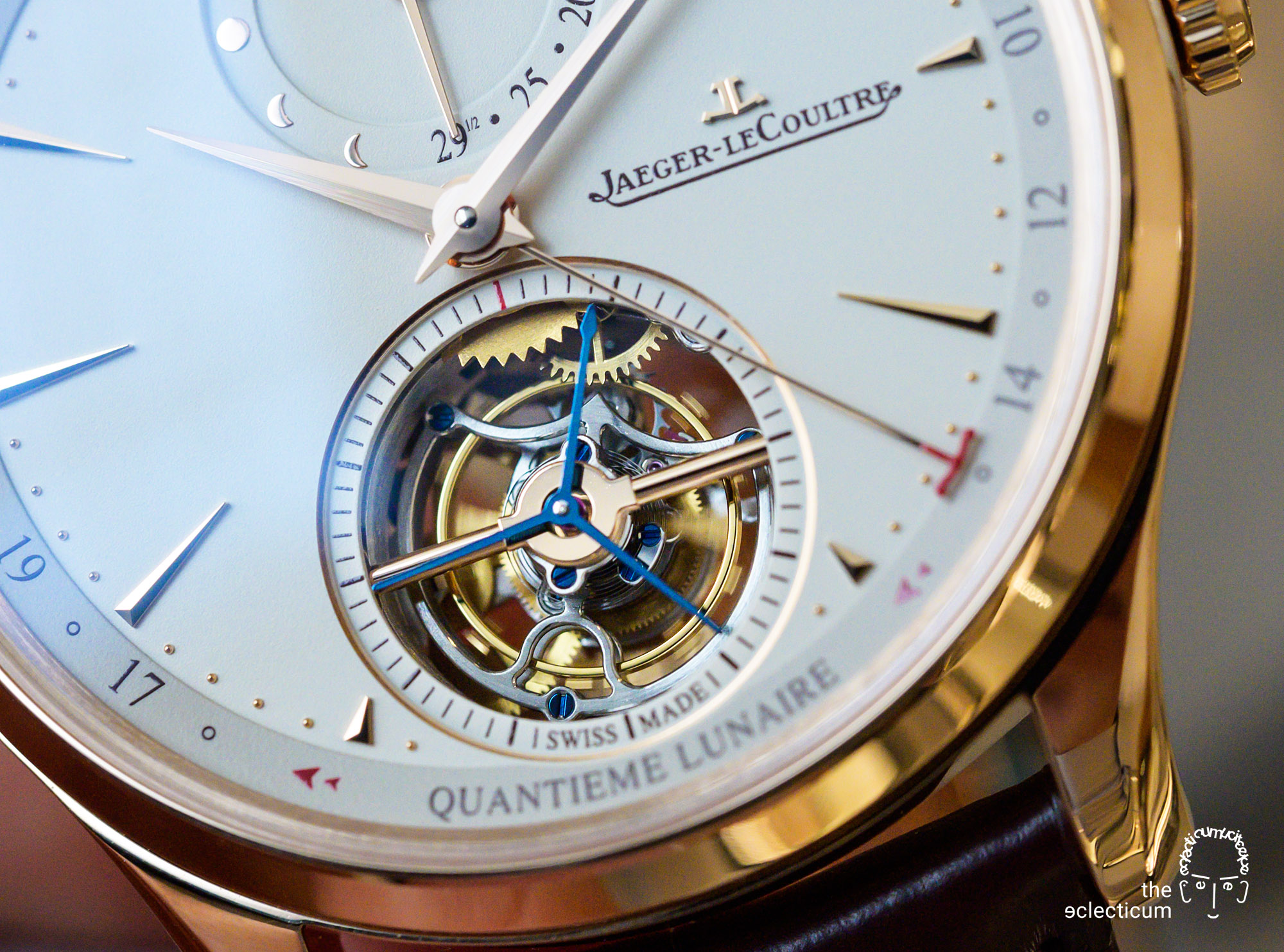 That pointer date has a charming twist to it: its scale is interrupted between 5 and 7 o’clock, and the pointer jumps accordingly to never cover the tourbillon cut-out – free view guaranteed throughout a month.

So much to the more obvious facts. But I could not take my eyes off this watch, and there are a number of reasons: 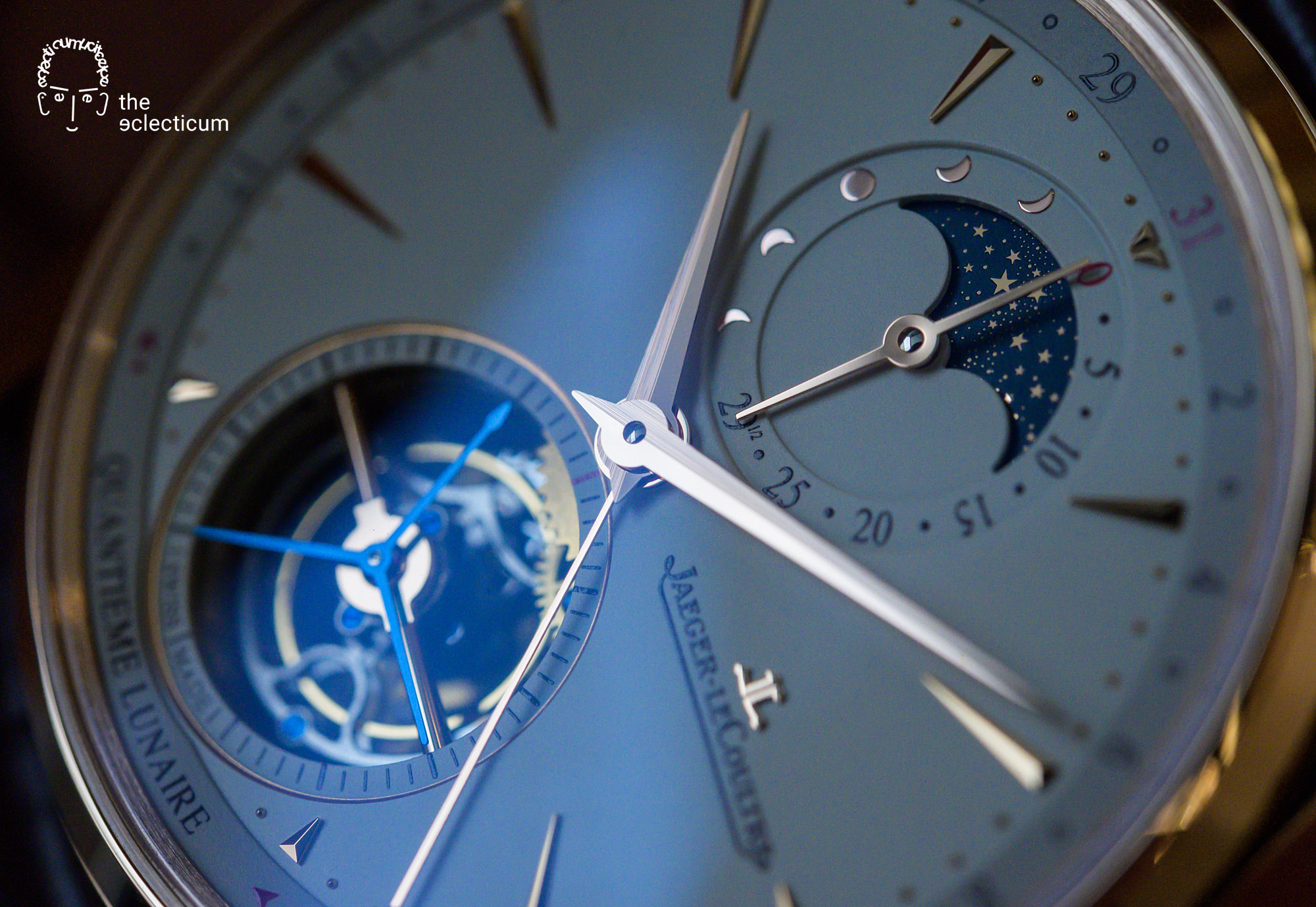 Jaeger-LeCoultre made a subtle change back to its own history: the hands are now longitudinally brushed with a very fine grit (instead of the previous, acid etched, I guess, mat surfaces which I always found a bit lacking in subtlety), a decoration which really emphasises the 3D sculpture – actually if you pay attention to above image, there is a lot of surface flow going on at the hands. And then the juxtaposition with the 3-prong seconds hand atop the tourbillon cage – heat blued, of course…

But this is not all – give it the right (directed) light, and the physical phenomenon of refraction recalls all the colours of the rainbow… (no wonder since it is the same phenomenon responsible): 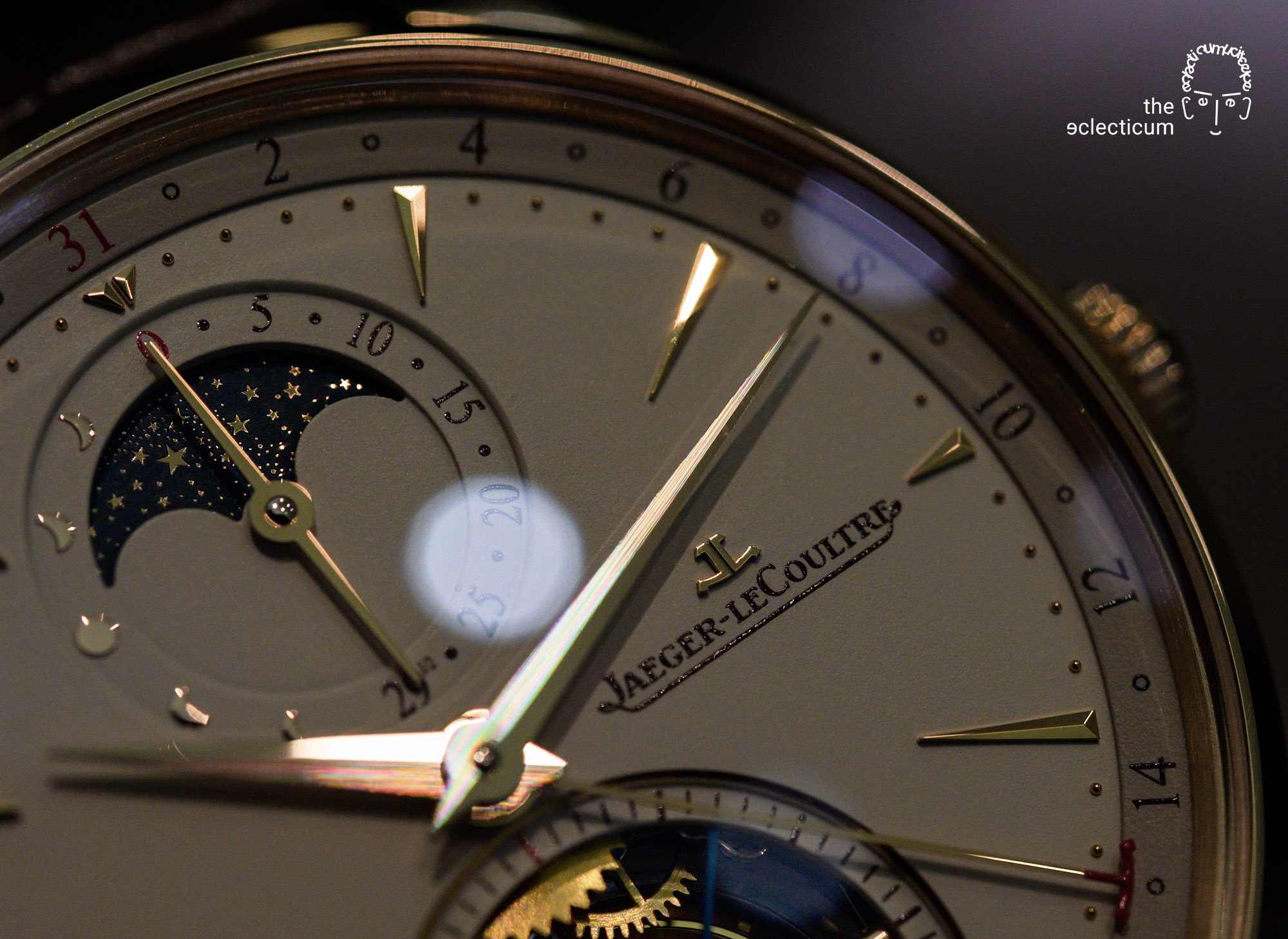 The Tourbillon Moon differs a bit from the other Master Control cases – it is far more emotional, detailed and accentuated than those. Its shape masterfully combines fluidity and rigidity with soft lines contrasted by edgy elements. If I were to compare it to one of the greatest cases ever, I would say this is a modern-day interpretation of Patek Philippe’s legendary Ref. 2526 (yes I know that’s a stretch!). 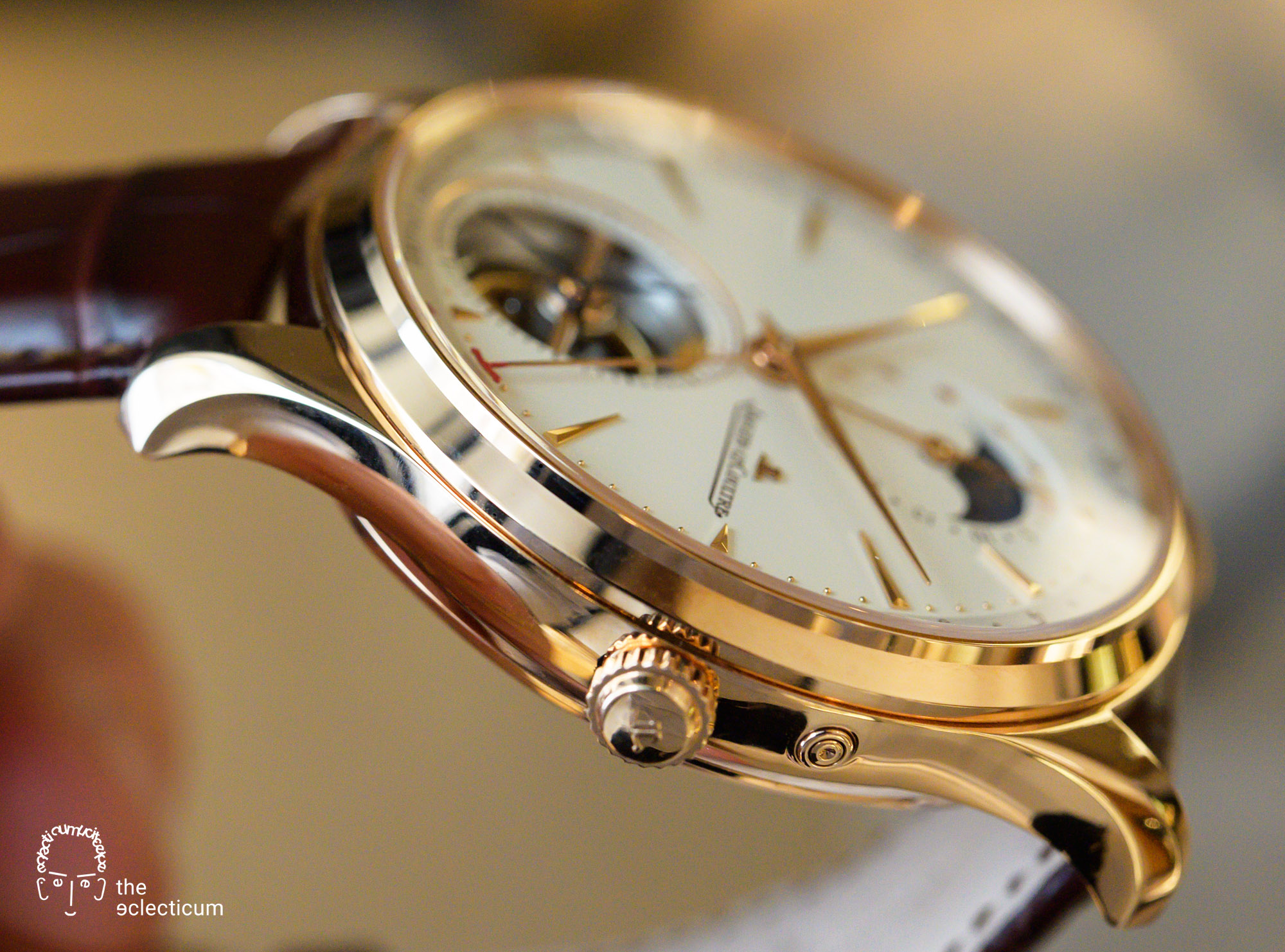 For the case back we find most of the new features of the Master control line but it lacks the attractive relief engraving of its simpler siblings: 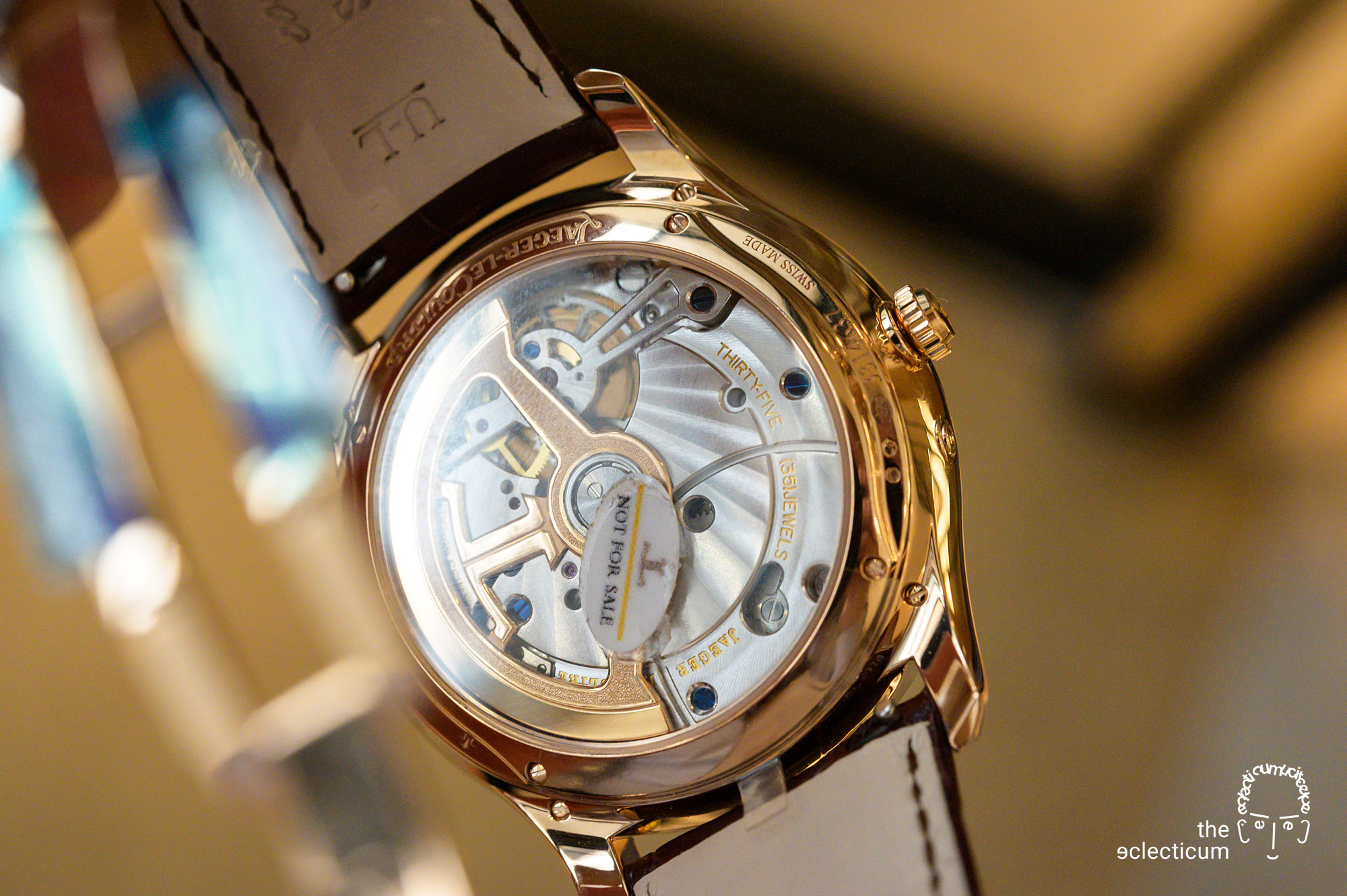 The movement is the automatic Cal. 983AA, which beats at 28,800 vph, contains 332 parts and offers a 45-hour power reserve – nice, but nothing really outstanding of particularly modern with this calibre. A pity!

I was already full of praise for the redesigned Master Control line, and I continue with the new Master Ultra Thin Tourbillon Moon alike. I think this watch is a hidden gem, all things considered, and this for me adds to its charm – but it could likewise also be its detriment. 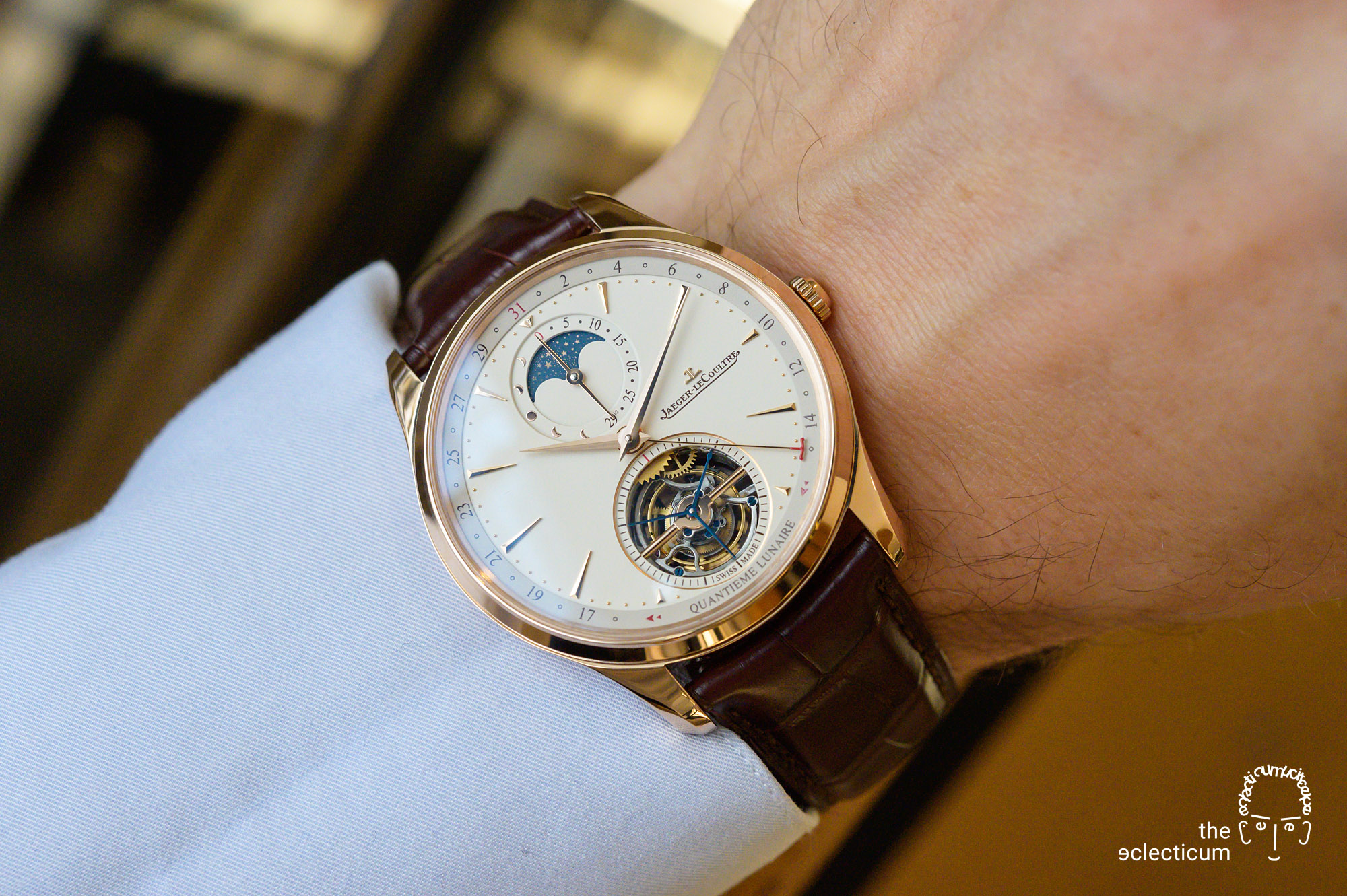 One has to overlook the tourbillon almost, as strange as this might sound, to free one’s view for these details which really define this watch. And those details again have nothing to do with the complications, which makes me dream of a time only version, no tourbillon, hand-wound perhaps and with a small second at 6, with similar case and dial details…