International Women’s Day: Exploring the female side of watchmaking!

Today we celebrate International Women’s Day, the annual celebration of women’s achievements – and also a reminder on still persisting discrimination. On this occasion, I would like to highlight the importance women have in watchmaking. And while doing so, once clearly gains the notion that women are indeed important, even essential participants in this industry, and in many instances drivers. But the inventory also shows that we as society still have a (very) long way to go before we can call this a just an equitable society. the fact that the majority of employees in watchmaking are female, but only a few occupy high-ranking jobs, speaks volume.

The first instances of women in (industrial) watchmaking might well be the famous Radium Girls, young women (there weren’t many older one, for a sad reason) who painstakingly painted the glowing numerals on dials for watches, tachometers or aeronautic instruments. They used a radium powder as luminous material (‘liquid sunshine’) using paintbrushes, and to achieve a more exacting finer stroke they were trained to put the brushes in their mouths. 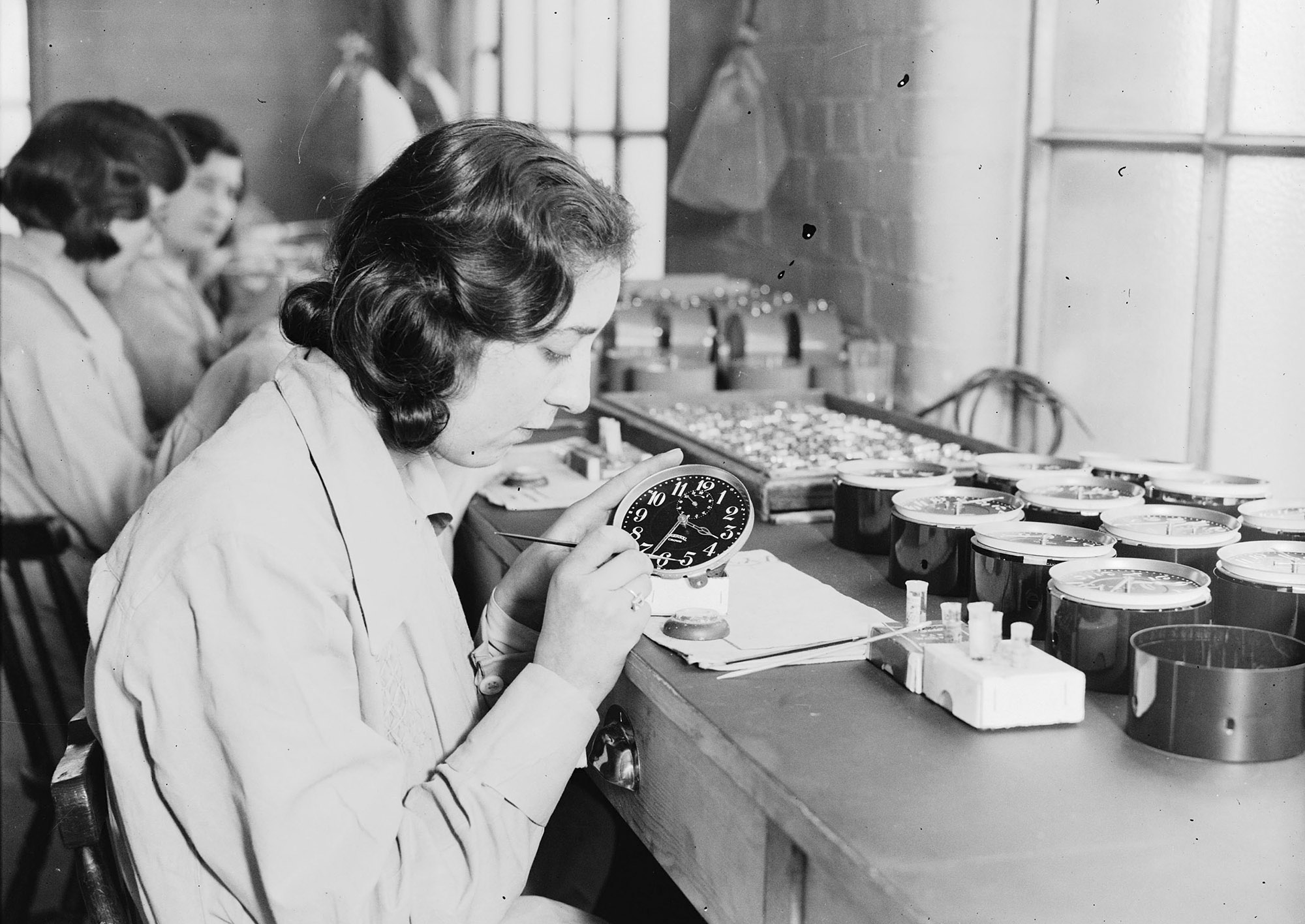 (‘Radium Girls’ in an Ingersoll dial factory. Image © Daily Herald Archive/SSPL/Getty Images)  That was essentially their death spell: The women took in significant amounts of the radioactive metal (which hovered around in mid air as well), which deposited in their bodies such that when the girls undressed in a dark room they were glowing from several parts of their bodies, including, naturally, the jaw bone. Many girls developed bad teeth, and often times the jaw bones were already deteriorated to the point that when a teeth was pulled the entire bone came out with it. The majority of the Radium Girls died at a very young age.

Only in the 1960 Radium was finally banned. But even today the Swiss authorities keep an inventory of former radium dial painting workshops which are likely radioactively contaminated.

For more on the Radium Girls, please read Timeline’s feature.

A second important but little appreciated traditional area of women in watchmaking are labourers on jobs requiring little or no formal training, such as machine operators, decorators, jewel setters or assembly line watchmakers. In (too) many instances, repetitive work. Those are the workers who power the majority of the factories in the watchmaking trades, small wheels in the overall large geartrain.

Then there are a number of examples like specialists in finest decoration, complications, and the like, watchmakers – all women who keep the industry running: 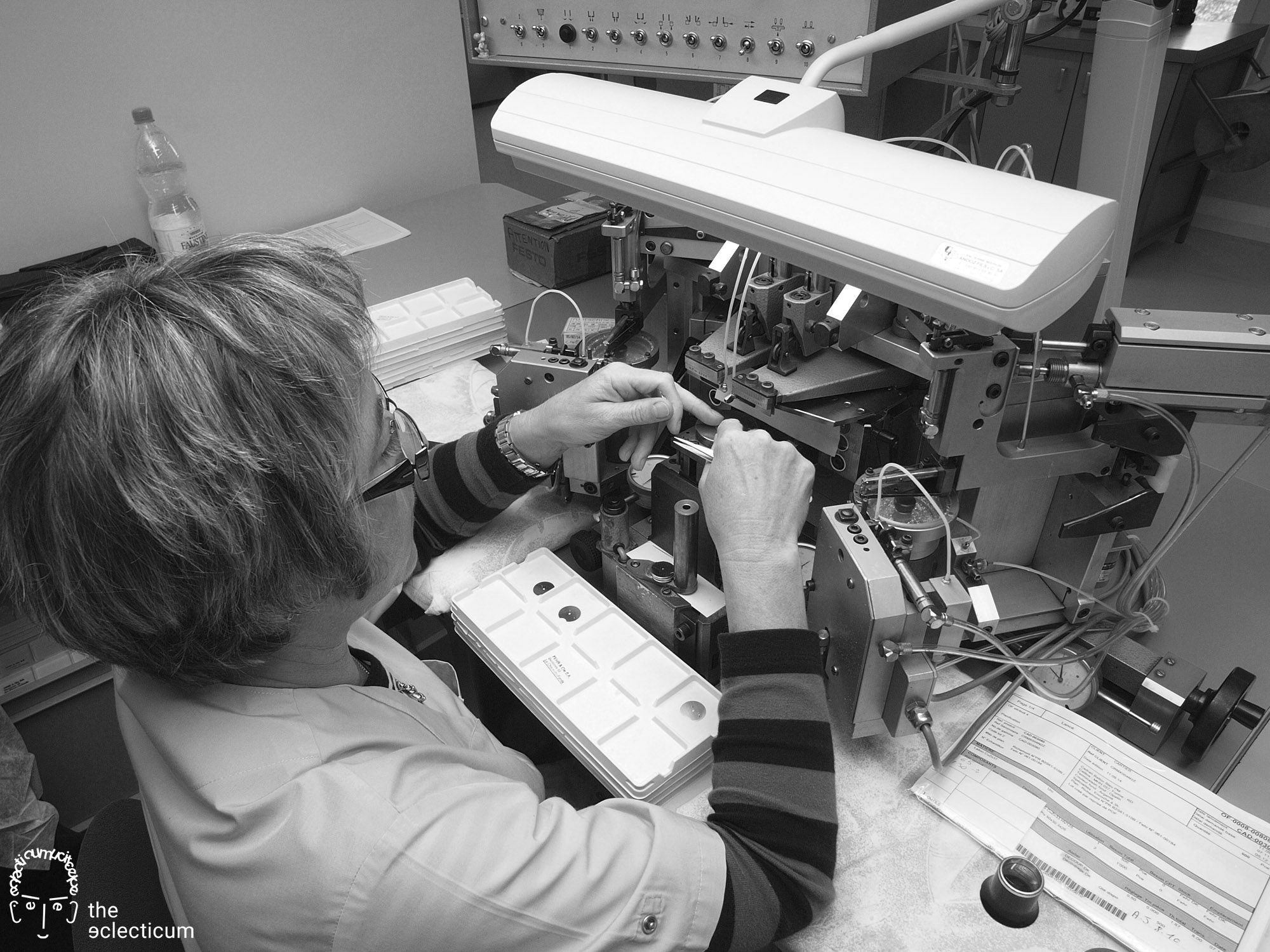 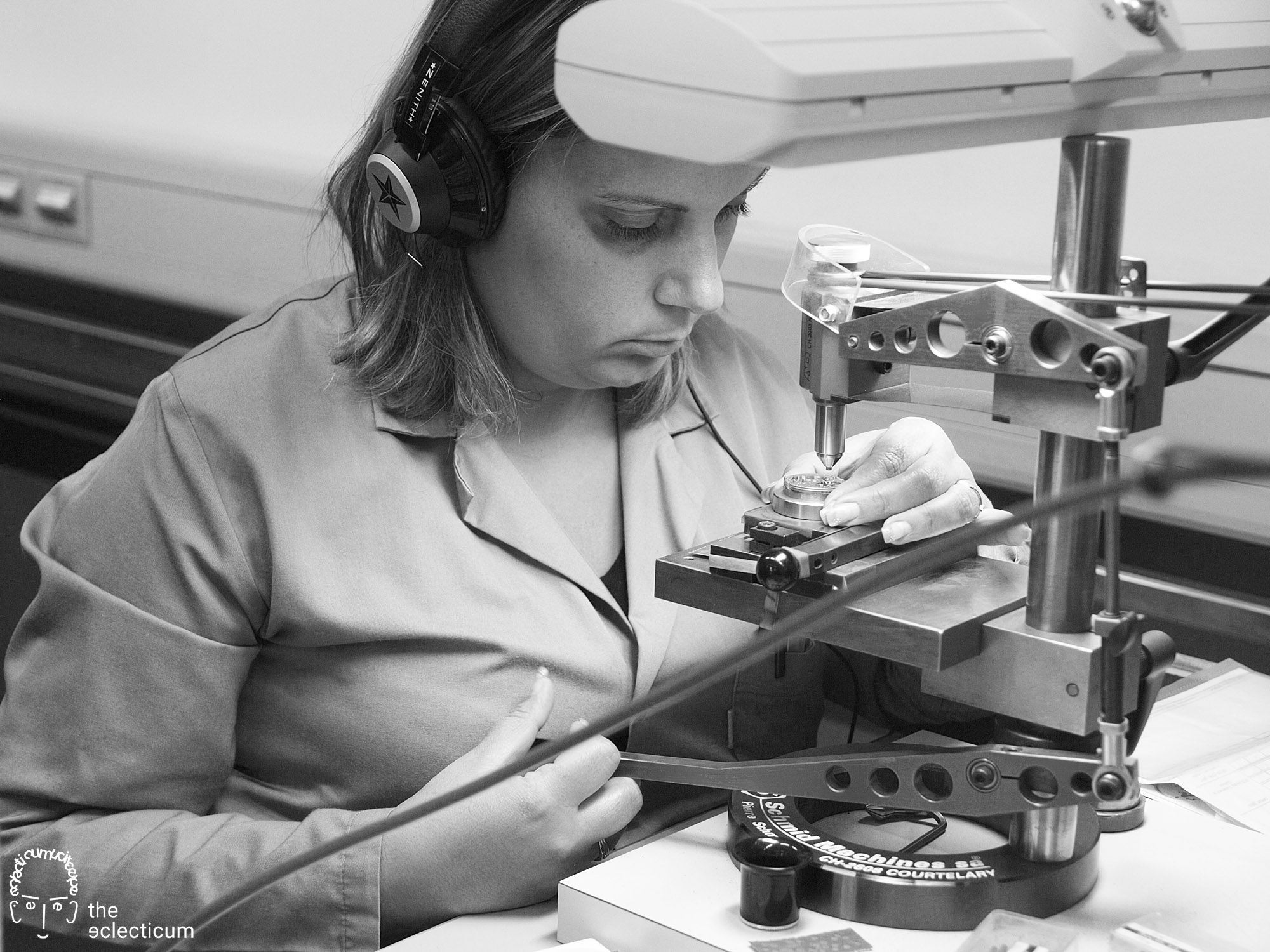 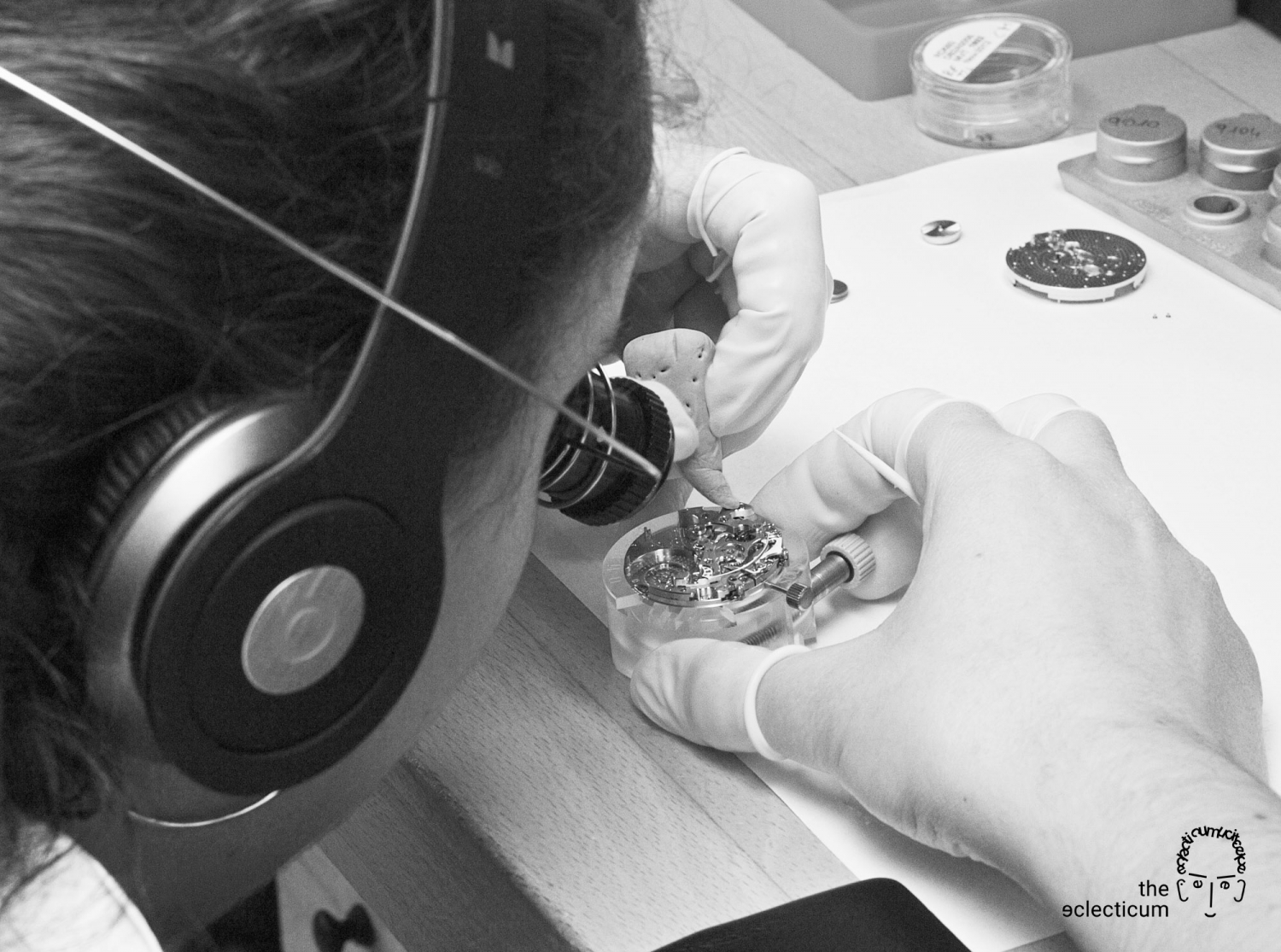 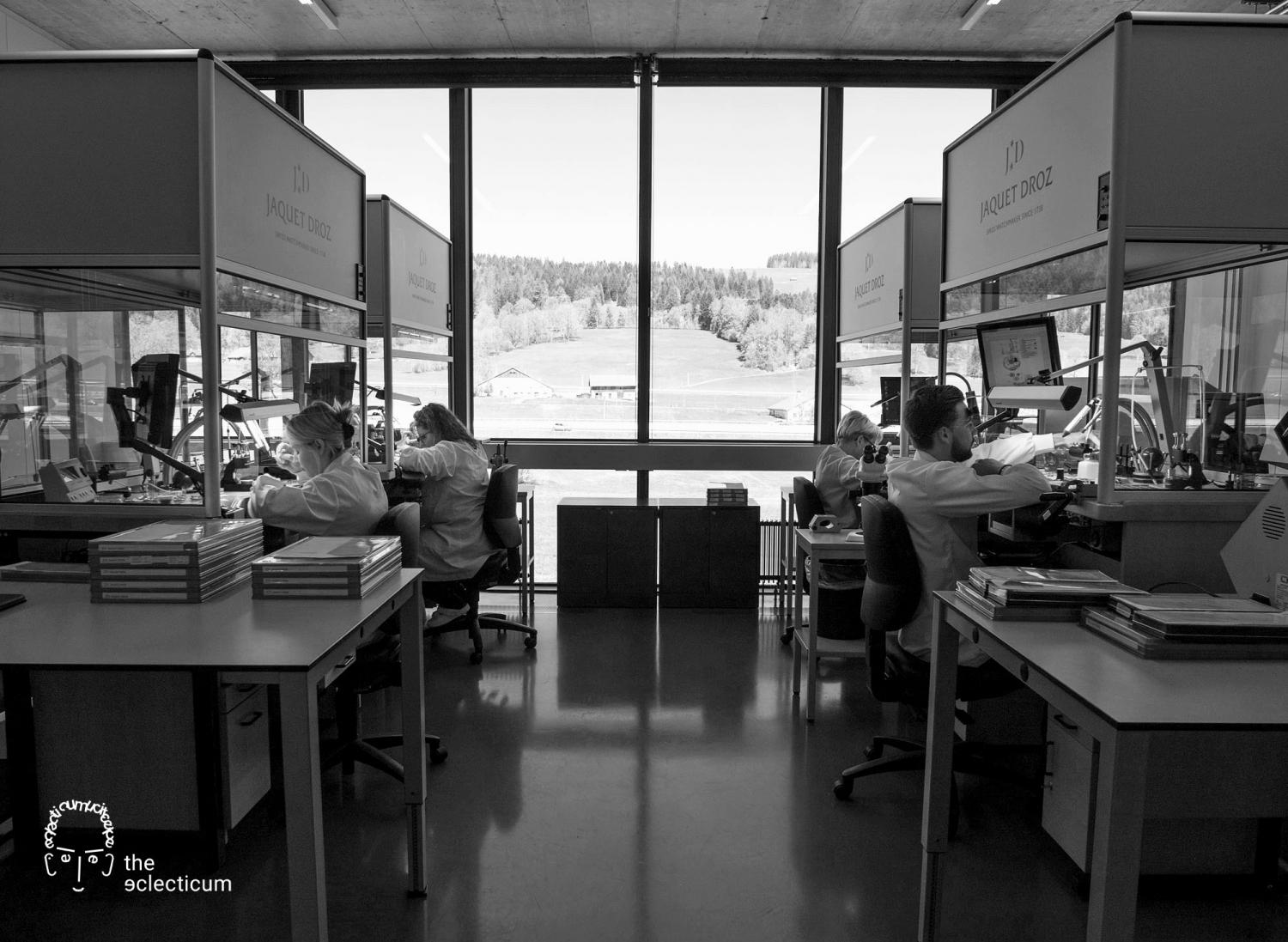 (watchmaker atelier at Jacquet Droz, note the majority are women) It is obvious that such tasks lack the glamour of a master watchmaker or enamel painter, but those are essential jobs – for the watch manufacturers as well as for the women themselves. They provide sources of income often in rural areas with little alternative, and help to support many a family even when life was not a beneficial friend.

I personally would fail to do any such job any day, but I appreciate the result on my wrist, and I know that my watch would not be the same without.

Women are also represented in highly specialised tasks. I would like to highlight Monique Wyssmueller of Minerva/Montblanc. Ms Wyssmueller is a so-called ‘regleuse‘, a specialist for hairspring end-curves, as delicate and decisive task in high-end watchmaking. This is also a task which traditionally was entrusted to women for their alleged greater dexterity at such small dimensions, although Ms Wysmueller learned her skills from her father (and also continued to use his tools), I therefore do not value this as a particularly strong sign for gender equality. 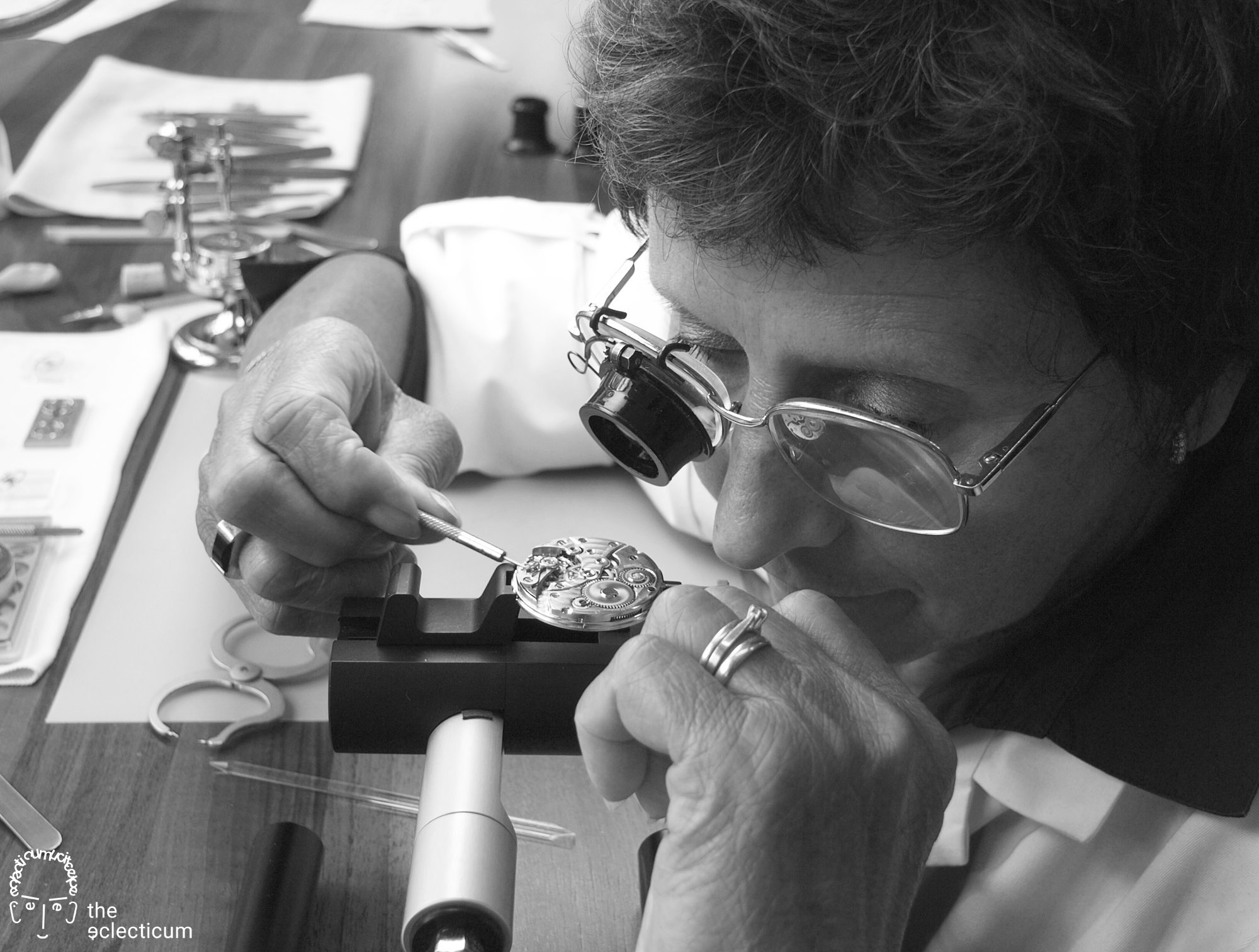 (Monique Wyssmueller at her bench) Montblanc I think did the right in highlighting Ms Wysmueller’s talent in roadshows and put an eminent specialist such as her to the frontline. In a way, Ms Wysmueller so became also a synonym for the reinforcement of fine watchmaking at Montblanc Villeret.

Women in the driving seat are particularly rare – but they exist. One of the role-models I think is Carole Forestier-Kasapi, (former) Head of Fine Watchmaking at Cartier (now with TAG Heuer), and one of the most eminent movement designers out there, and responsible for all the recent more complicated Cartier watches, which she designed with her idiosyncratic technical details. Ms Forestier-Kasapi has a considerable pre-history for watchmaking excellence before Cartier and initially also worked on Ulysse Nardin’s first Freak. 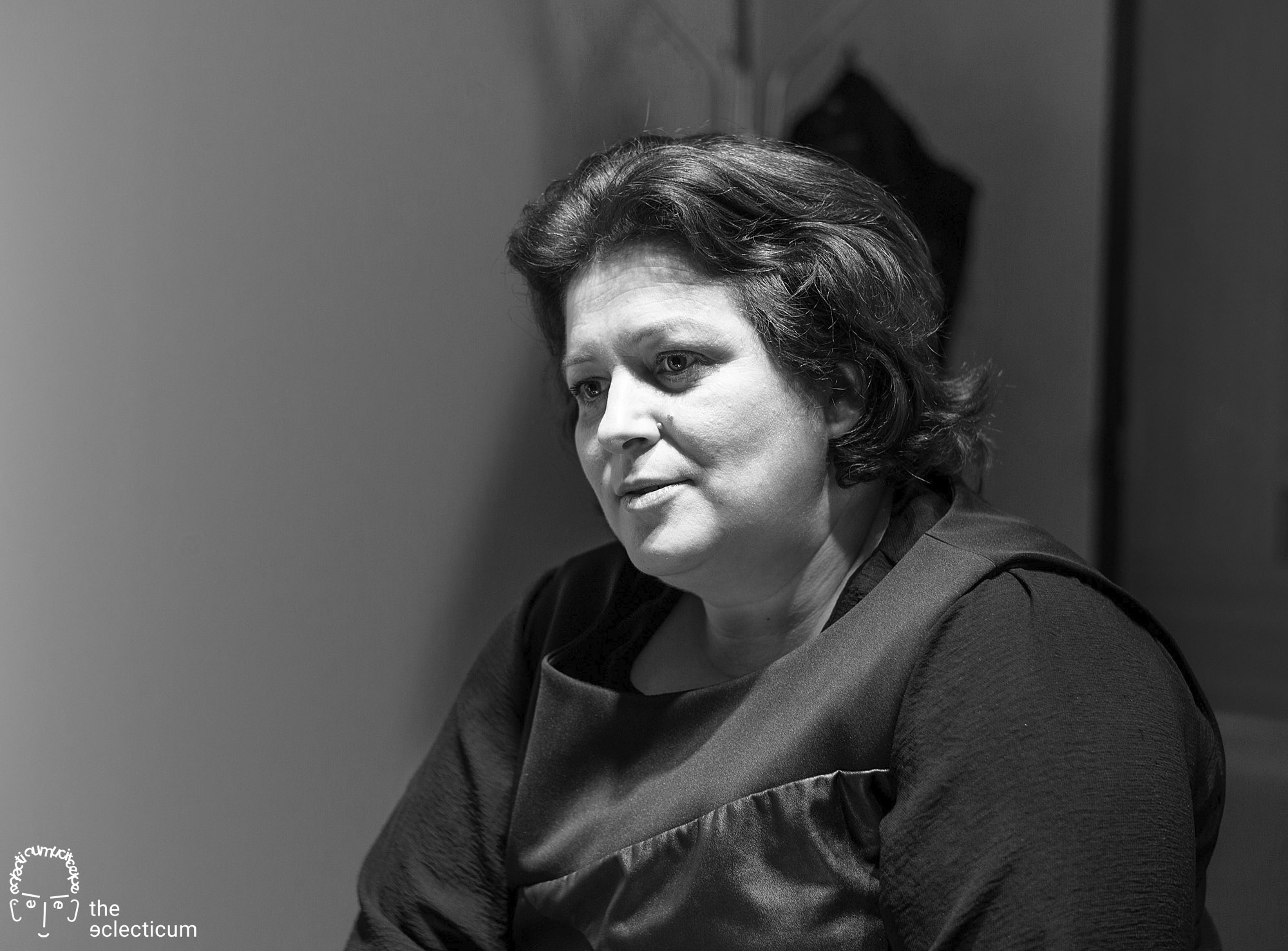 While women in technically demanding positions are already rare, the situation in management positions is not different – very few serious positions at the level of business development, managing directors or CEOs are held by women. But there are exceptions, role models if you like:

This is remarkable as historically female heads of companies were only accepted if there was no suitable male alternative (note that overall, there’s a lot of Richemont brands here…).

Do women set different foci? Difficult to say. Interestingly, during the time at the helm of their respective companies both brands reinforced their complication competence, with several notable prizes at the prestigious Grand Prix d’Horlogerie de Genève as the result. But one thing is certain: the way work is done and executed changed, with more flexible modes of operation, something a lot of modern women certainly appreciate. This attracts new female specialists, and helps to live out heretofore untapped and wasted talent.

Leading a company is one thing, founding and setting up an entirely different one. This is the high risk job, a job which exposes you like no other, and one where both reward (‘she did it because she knew how to entice the men’) as well as failure (‘well, she is a woman, what did you expect!’) are all too easily attributed to sex – and both in a negative way. This deters a lot of otherwise perfectly talented and experienced ladies. One who did not shy away from circumstances is Christine Hutter, trained watchmaker and a former A. Lange & Söhne executive who dared to face the odds and set out to establish the ‘other’ elite watchmaker in Glashütte, Moritz Grossmann. 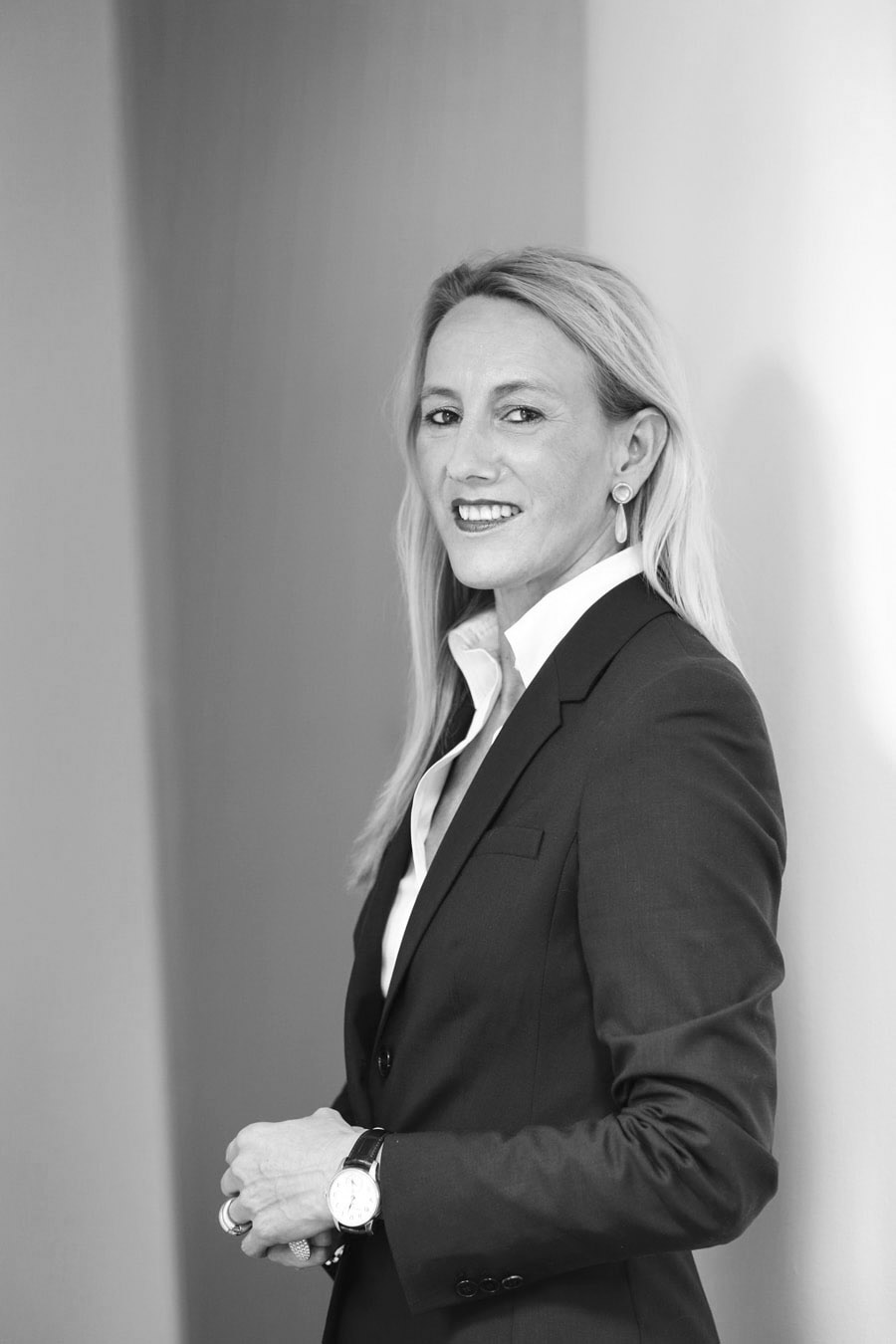 Thus, I really appreciate what Ms Hutter dared to do and how she succeeded – even if I at times shake my head on occasion of a number of watches created by Moritz Grossmann, a company now more than 12 years in business. But then there are these mind-blowing creations as well, such as the ‘Hamatic’ – probably the most beautiful automatic movement that ever existed.

When you need ‘a man with nerves of steel’, you sometimes have to select a lady. This is essentially what Dr. Franco Cologni, then CEO of Panerai, did when he headhunted Fabienne Lupo as (former) Chairwoman and managing director of Fondation de la Haute Horlogerie (FHH). 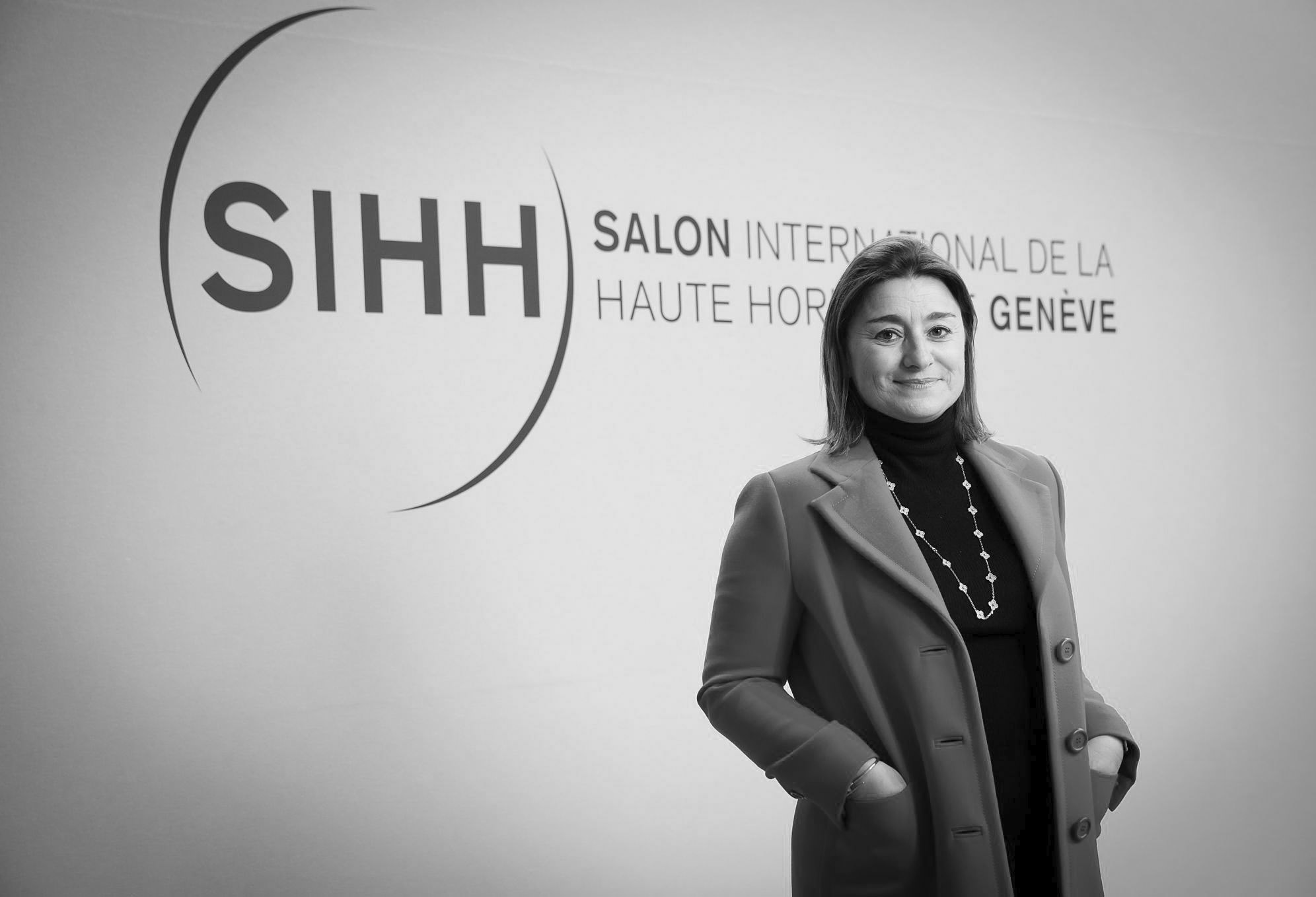 (image © point-of-views.ch) Lupo, with a graduate degree in business, marketing and mathematical modelling in her treasure chest, shed new life into the Salon International d’Haute Horlogerie (S.I.H.H.; now ‘Watches & Wonders Geneva’ (and recently cancelled)), a rather sedated exhibition from business for business into an international acclaimed meeting of the who-is-who in the watch industry, with a recognition which far extends the core watch business participants. As her last taks before she left the FHH in July 2020, she was hard at work in executing the next transformations – first in securing the future of large watch events in Geneva, with Watches & Wonders and also partnering with five major luxury watch brands—Rolex, Patek Philippe, Chanel, Chopard and Tudor, and secondly, the digital one, the one where watch brands and watch collectors seek more direct, immediate interaction. A challenge or two for what represents essentially a middle-‘man’ (pun intended).

With these examples above, all hand-picked and for sure incomplete, I have presented the bad, the ugly and the encouraging, the hopefully future ‘normal’ not only in the watch industry. This future dream scenario is one where a person, regardless of gender, ethnicity, religion or any other distinction can contribute to this wonderful industry to the best of his/her talents and ability – no other questions asked.

Why this may seem idealistic – there are examples where simply talents play with each other. May I remind on Maria Kristina and Richard Habring? None of the two would be where they together stand now. Each of the two contribute to their joint business, complement each other, and rumour has it they are also quite sympathetic to each other… and moreover, they emphasise their mutual complement in their brand communication. 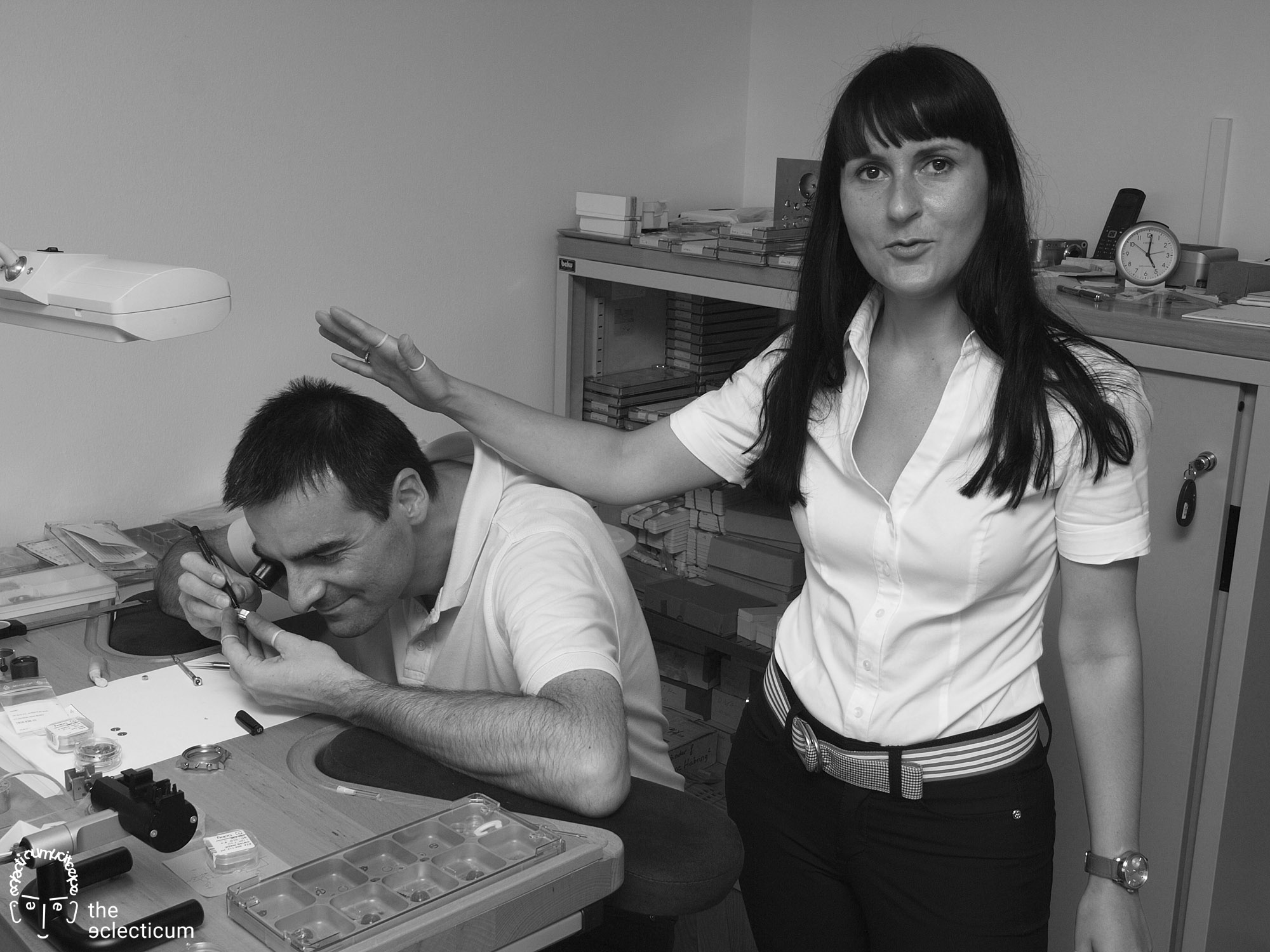 (Maria Kristina and Richard Habring – together they make Habring2)

Is the model for the future fertilising from the small businesses? If you think of another watchmaking business couple, Stefan and Eve Kudoke (and a few others), then one might be right. But there is so mich potential. And it also feels so natural that one asks… where’s the problem?

And this, the notion of potential, for me is key: only if society and industry offer equal chances to everyone we will truly exploit the dormant potential. This is preferable, as long as I am concerned, on a societal and interpersonal level. But this also has a meaning for us watch collectors, if I might adopt an egoistic stance: this bears the promise to see a number of fantastic brain excesses transgressing into the realm of physical objects!

For now, I’d like to thank all the women fighting their way to the top, and delivering the goods every day.

(This article has been published first on 08 March 2020, and has meanwhile been updated)

The value of passionate spending: A bespoke project about shoes with ´Il Micio...