A watch which surprises through its tactile qualities, and also one which is closer to history as it appears at first sight 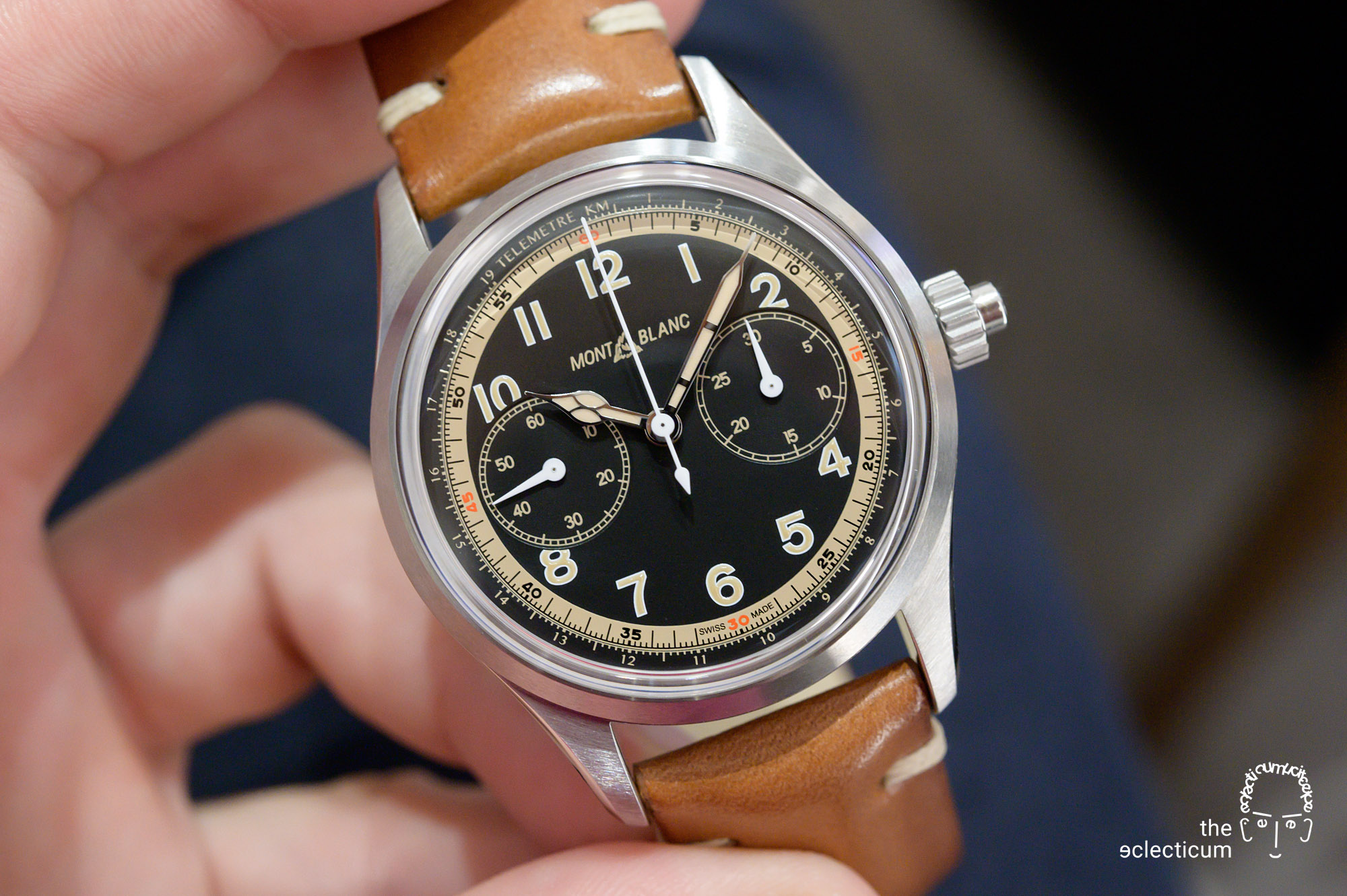 Today, I find it quite a challenge to write about Montblanc timepieces, particularly when it comes to those which are not fitted with one of the legendary Minerva-derived calibres: including the Summit smart watches, I count no less than 7 watch collections (quite a number for a pen maker!), with those watches with the more sought-after Minerva or at least ‘within Richmond’ manufacture movements are dispersed throughout.

The Montblanc 1858 collection is just three years old and one which takes inspiration from Minerva’s rich cornucopia of vintage watches, chronographs mostly, recalling their use as tools in exploration, medicine and sports (but unfortunately not all equipped with Minerva movements, sigh!).

The watch I had at hand recently – and which surprised me to state this clearly at the beginning – was exactly such: a (loosely) Minerva-inspired monopusher chronograph with – shock! – an (essentially) Valjoux 7750-based movement: the new Montblanc 1858 Monopusher Chronograph: 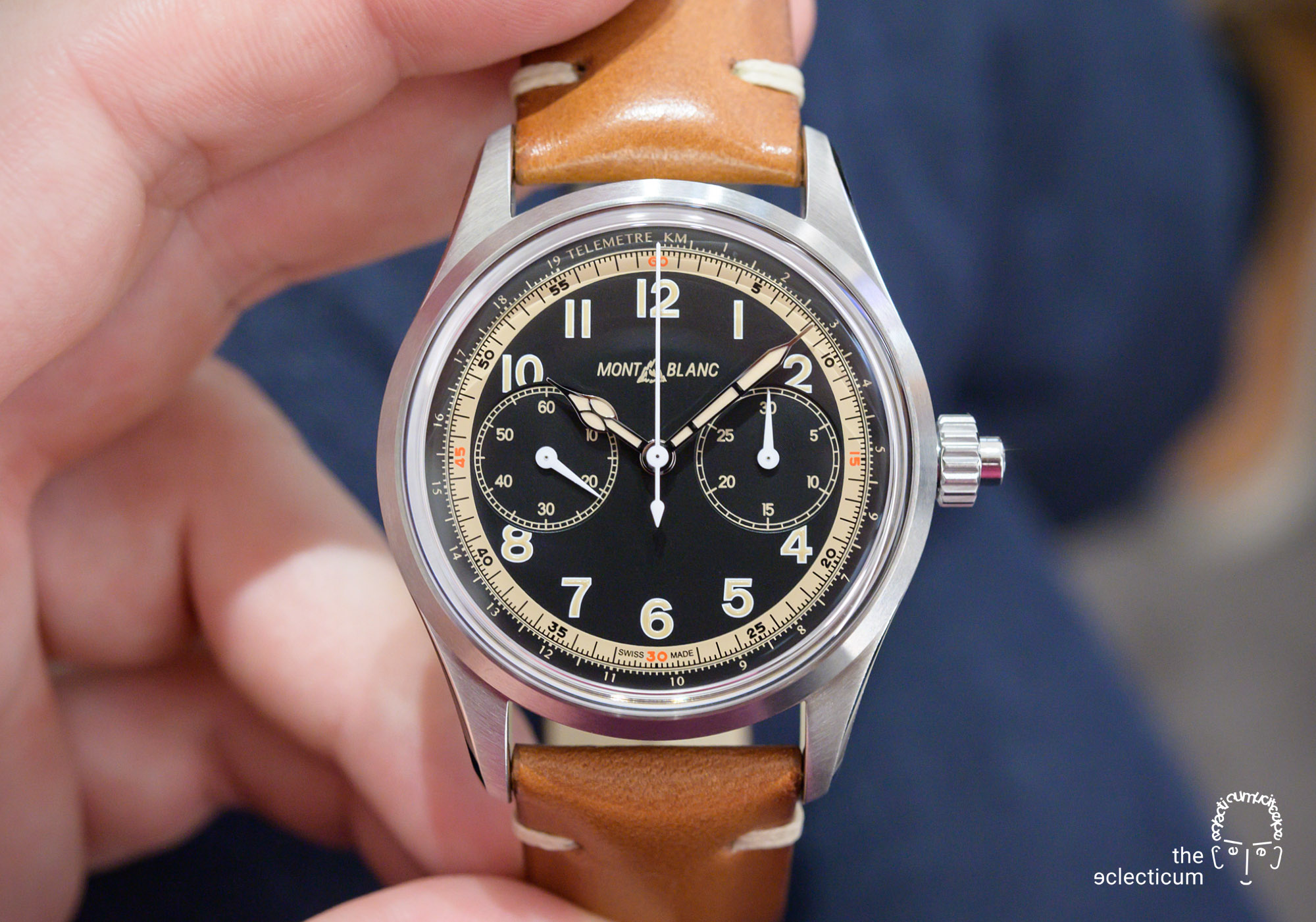 What sounds like heresy is actually a very lovely watch: a bit on the big side (42 x 14.7mm) as far as specs are concerned (but I come to this later) yet with one of those je ne sais quois* oh so attractive vintage designs: 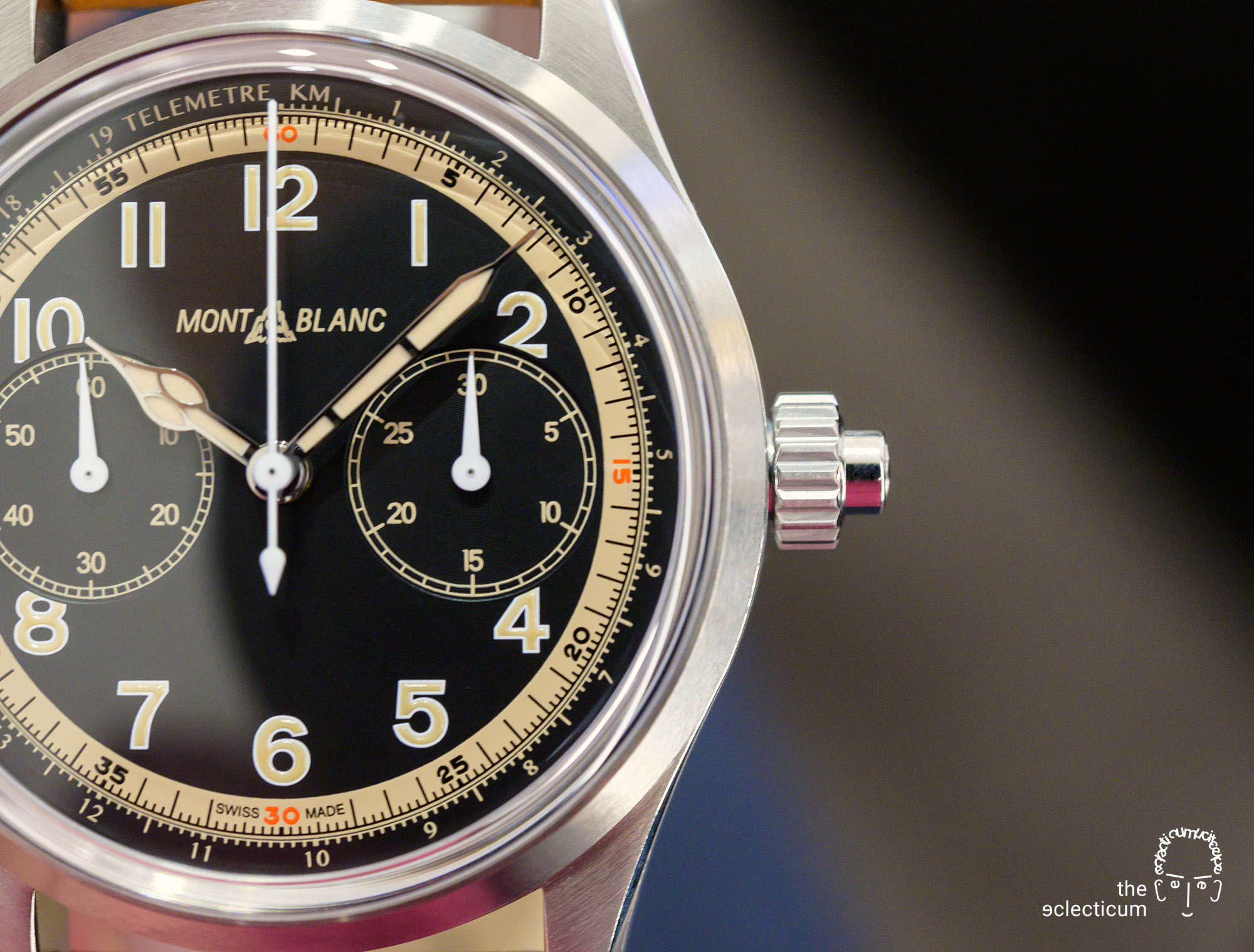 A clean steel case, with a boxed crystal, fine egg-shell textures and concentric rings on the (large) subdials, black and beige (down to the faux-patina luminous material), cathedral hands and a telemeter scale – can it get any more vintage? 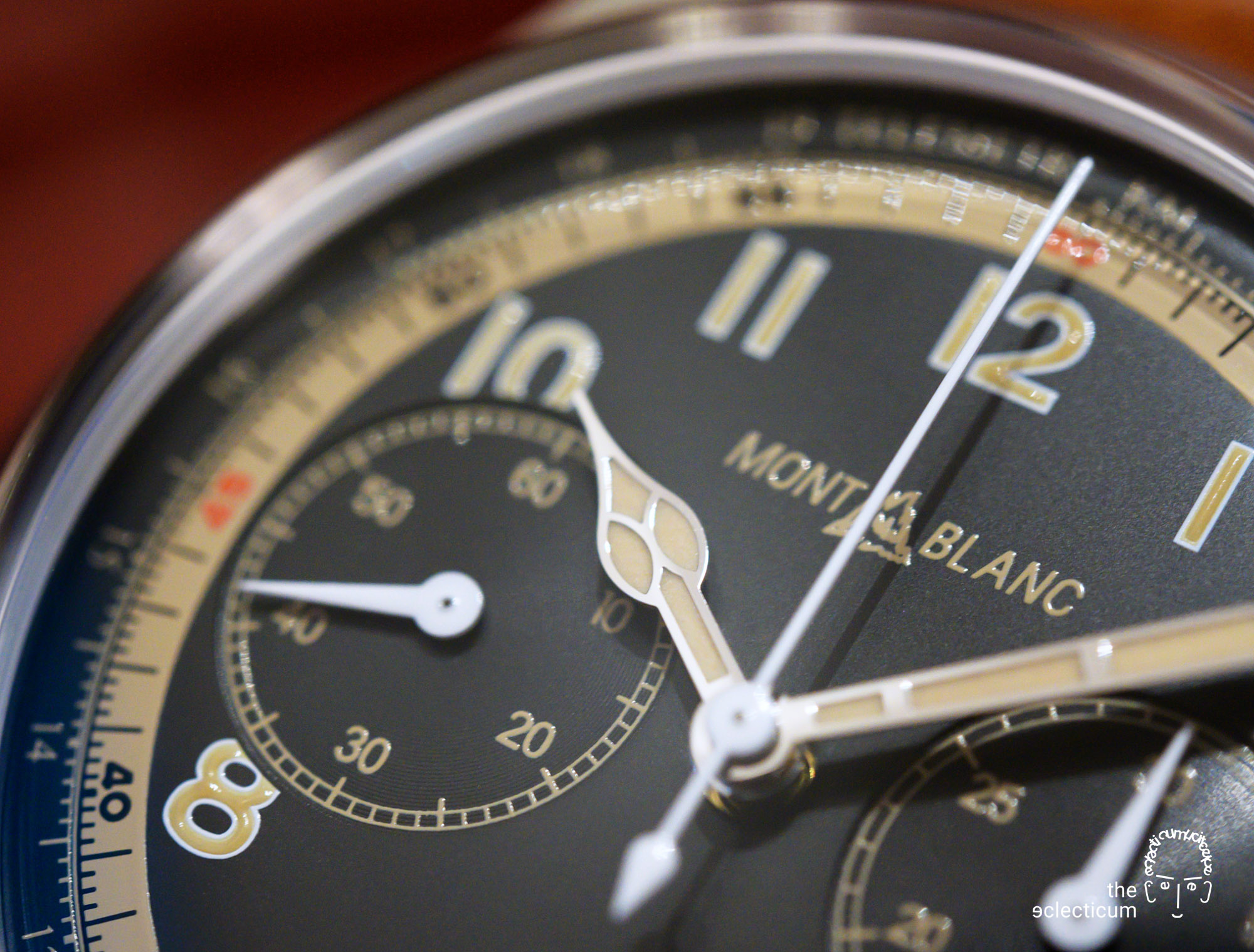 This is textbook design for a vintage watch, but the decisive detail here is on the crown: the monopusher button is integrated coaxially into the crown! 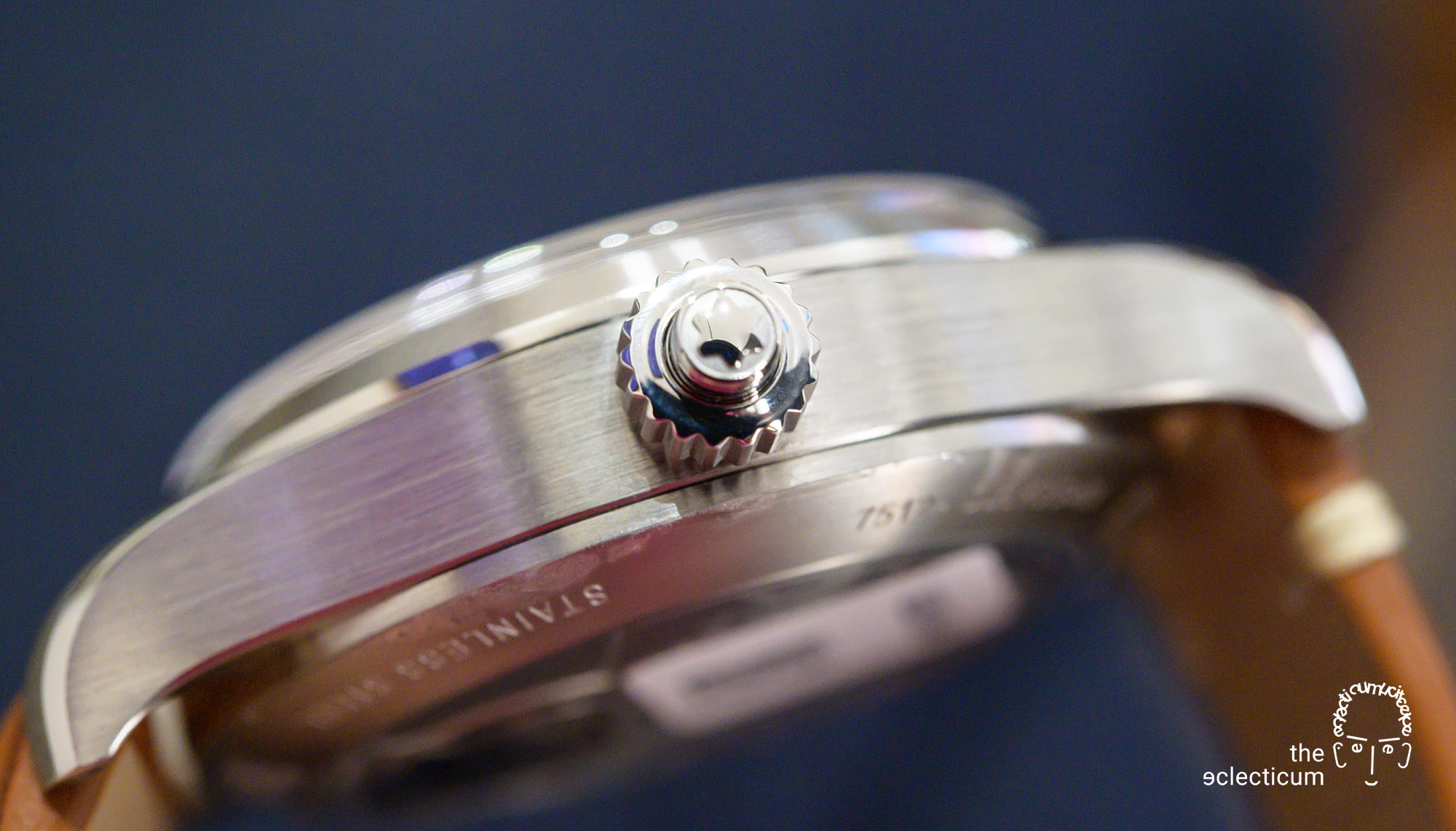 It is this integration which makes the watch a rare version of the already not so abundant chronographs where the entire operation is controlled by a single pusher (thereby fixing the start-stop-return sequence and making interval measurements impossible).

Remarkable refinement on a modest technical base

Montblanc, as stated already, did not use the very fine Minerva Cal. MB 13.21 as engine but started with the Sellita SW510, itself a derivate of the common Valjoux 7750 – a reliable and precise workhorse movement, but that’s it.

But that was only a starting point: With the Cal. MB25.12 Montblanc together with Sellita have developed something remarkable once you get a chance (and take your time) to experience the watch: The tactility of the pusher has little left from the rather rough and robust feel typical for cam-controlled chronographs (and monopushers particularly), and instead is surprisingly smooth with a precisely defined ‘click’ (all this in the context of similarly priced watches, of course!). Add to this the large crown demanded by the push-button in its centre, and you’ll get a lot of pleasant haptics in return! 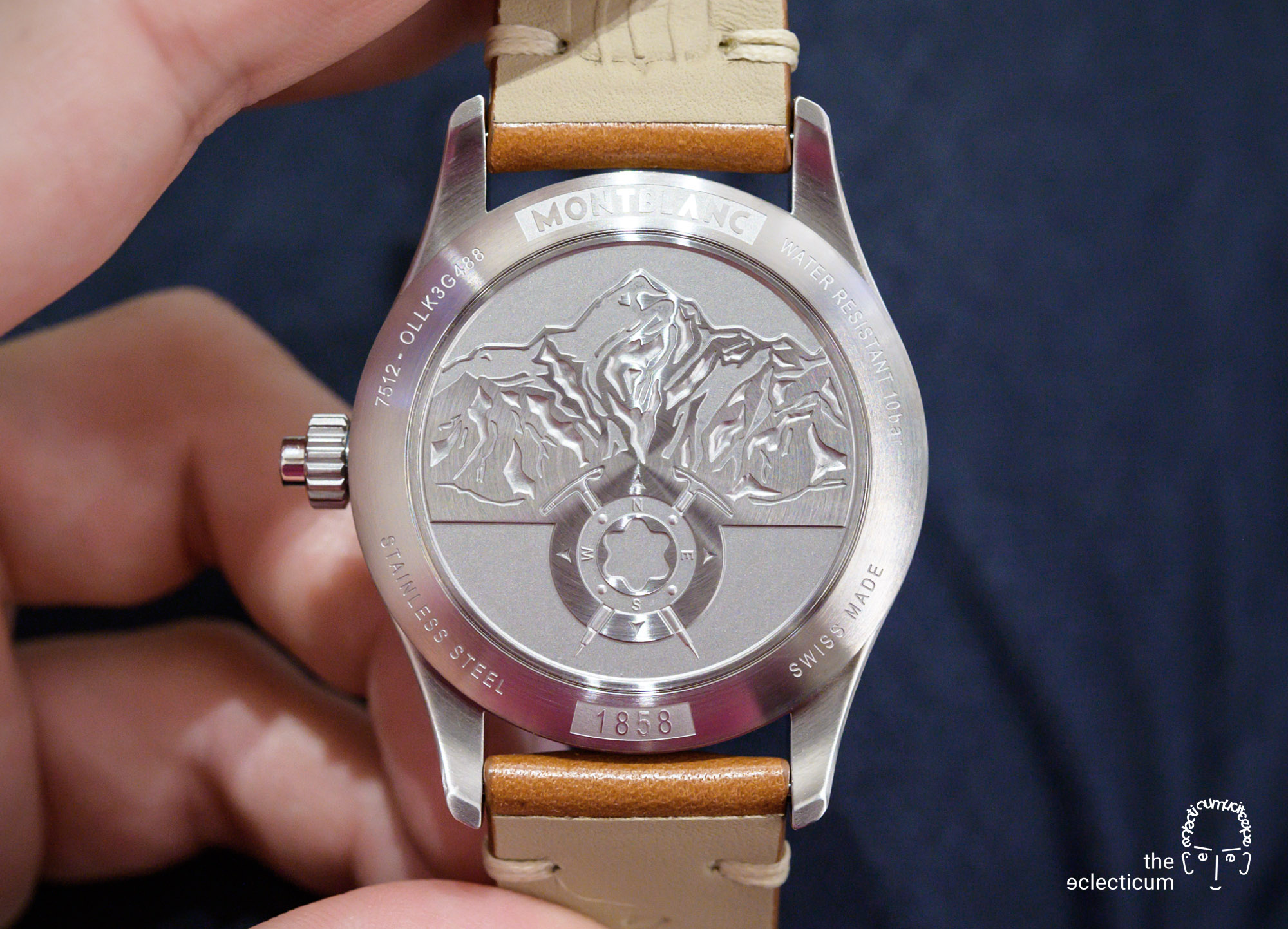 So, Montblanc has to be commended for the detail work done on the movement as well as the movement/case/crown/pusher interface. I am pretty sure this has been clearly defined in the specification sheet as (i) Montblanc/Minerva has a reputation to defend when it comes to chronographs, and (ii) I cross-checked with other instances using this movement, e.g. in the Heritage chronograph – exactly same pusher feel!

All this notwithstanding Montblanc chose not to show the movement, and I think I agree with this – it’s not the most satisfying sight, particularly if compared to the Minerva-based movements, and finally: what makes it stand out here is invisible…

A moment of truth

With all that discussed it is time to strap it on – with the well-made aged cognac coloured calf strap: the 1858 Monopusher Chronograph is a compact watch, wearing slightly smaller (but not thinner) than the specifications would hint, giving a lot of presence in return. 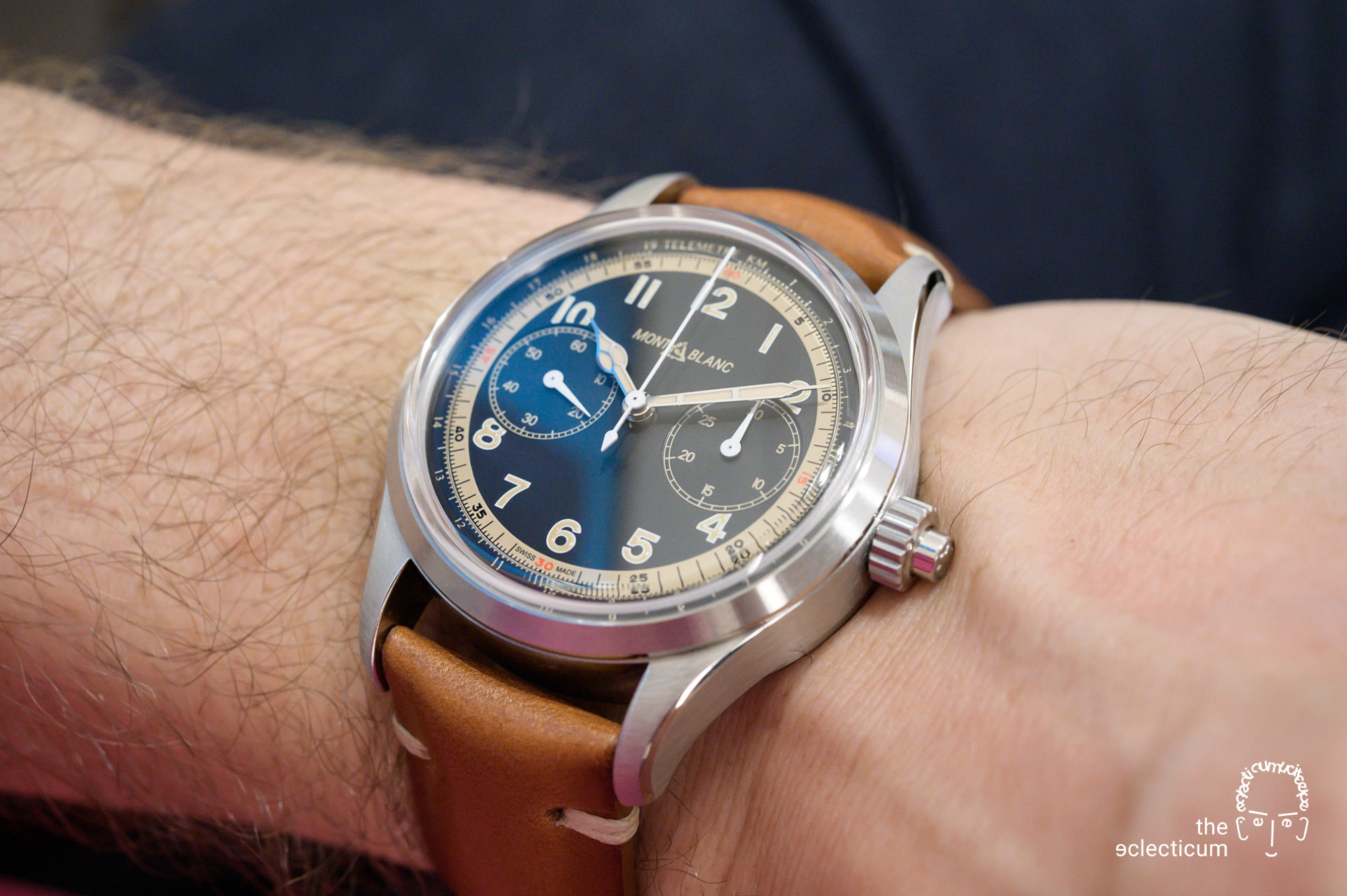 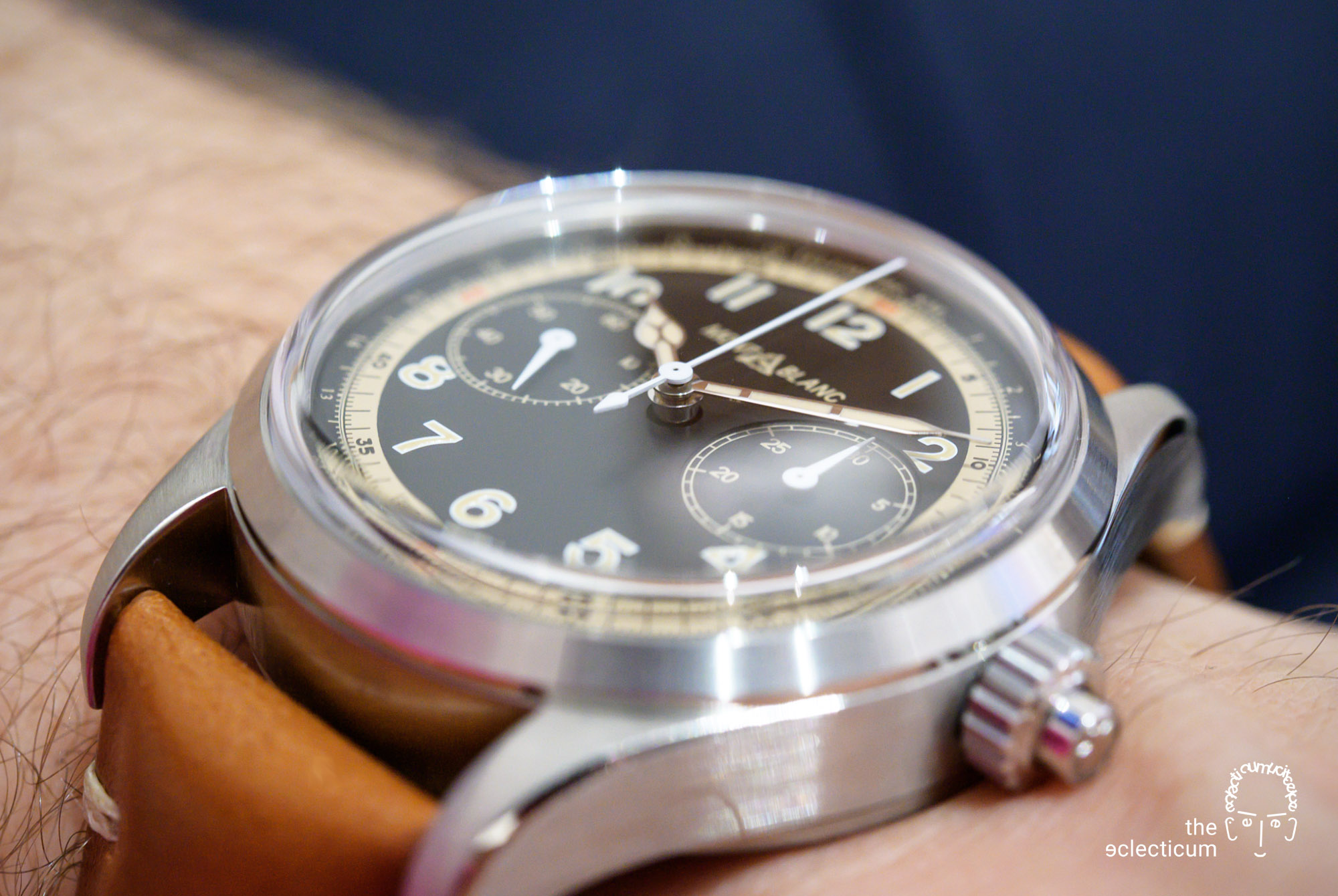 The crown/pusher is ergonomically designed and does not poke in your wrist, the case is of simple shape, but comes with lovely polished lugs edge accentuating the otherwise brushed case surfaces – and giving enough spice to contrast with the bold dial design.

What’s left at the end is the ‘issue’ of the movement – a Valjoux/Sellita chronograph in a Minerva-inspired watch, a manufacture famous for their in-house chronographs?

The external aspect of this is the price (below € 5,000) which puts this watch on par with OMEGA’s legendary Speedmaster but leaves enough distance to leave enough room for OMEGA’s co-axial chronographs, Breitlings in-house ones or Zenith watches with the legendary El Primero movement. Given the rarity of the complication, its refinement and presentation, this seems an appropriate setting.

The direct implication concerns mostly the passionate collector, I guess: will he/she appreciate the refinement work done, or will disappointment prevail? For me, there are two points to think about: First, the work done on the movement and its integration into the case is excellent and gives it a tactile quality one would not expect from its base. This is no small watchmaking feat, and a true one as well.

Second, even Minerva in the good old days was not as pure as one might guess: even in the last century they used at time Valjoux chronograph movement, amongst them even the 7750 – déjà vu!

*) P.S.: I have an idea indeed why those vintage designs are so attractive these days – but I leave this for a later article!