For those who value performance-oriented watchmaking details, the Glashütte Original Senator Chronometer was always worthy a consideration: a movement focussed on precision time readout with its return-to-zero seconds and panorama date is without peers. The manufacturer now presents a new subtly refined version which will put the watch on the radar of those who were not yet convinced by aesthetics or finishing. 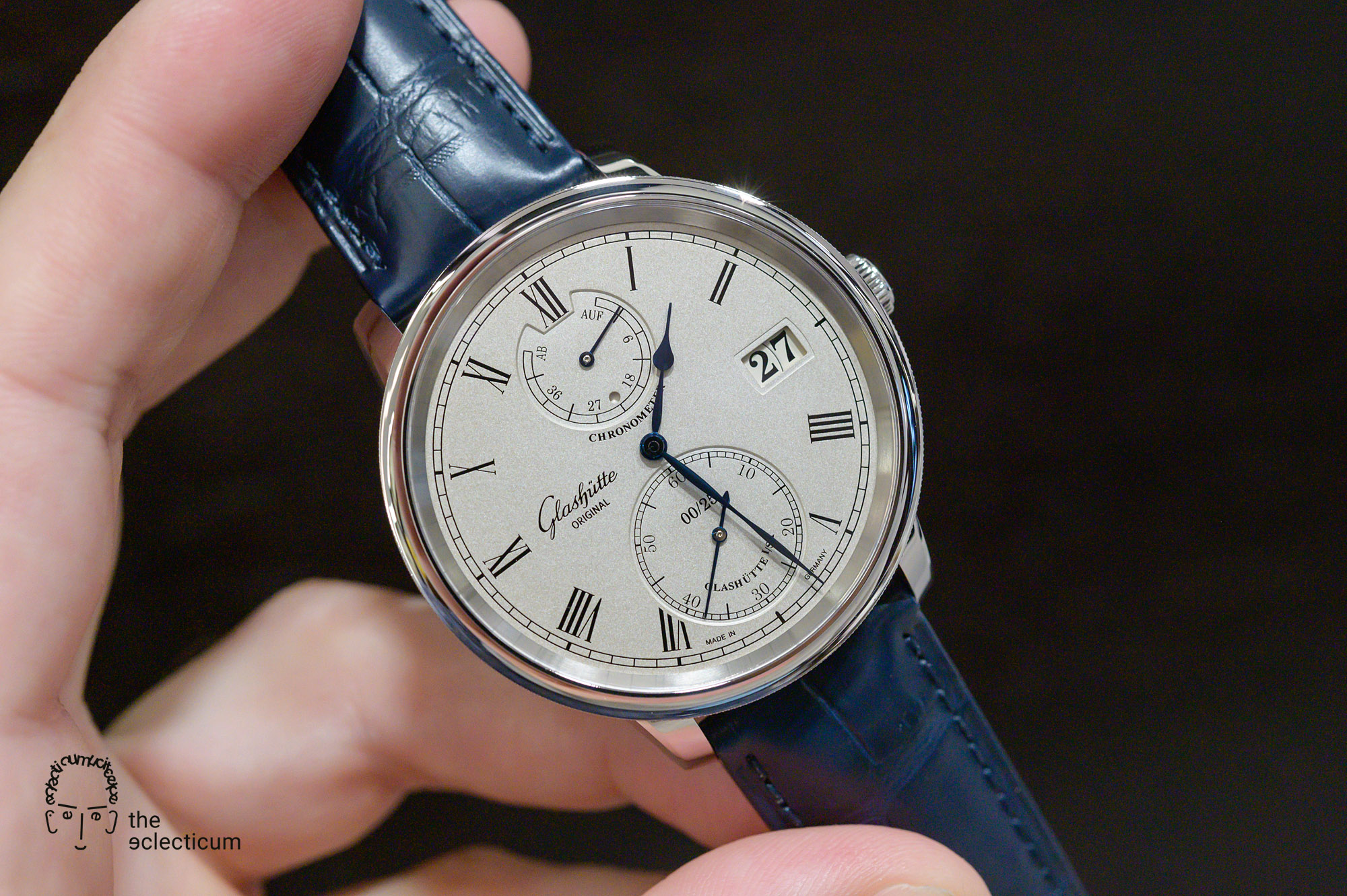 Of course, nobody really needs it – a wrist chronometer, with all the ubiquitous super-exact pocket watches called smartphones. Still, no watchmaker serious about the essence of his or her trade can get around it, particularly if you are German. (after all, Germany still has their own chronometer norms, which besides are a bit more stringent than the Swiss COSC…) Thus, also Glashütte Original paid their dues, with the Senator Chronometer (and later also with the Senator Excellence at a different level).

The watch, 42mm is thus ‘normal’ by current standards, came with a hand wound movement, Cal. 58-01, aptly imbued with mechanical finesses to aid precision timekeeping and reading: a seconds hand which would return to 12 o’clock once the crown is pulled, and simultaneously the minute hand advances to the next full minute index – allowing the user to set the watch precisely according an official time signal.  A power reserve as well as GO’s iconic panorama date are there as well, all packaged into a lovely clockwork with ¾ plate, screwed chatons, engraved balance cock and a swan’s neck microregulator.

Yet, the watch appears to never really moved the hearts of collectors at large – I assume it’s rather stale ‘hanseatic’ design got in the way. This is now about to change (but only 25 lucky individuals will profit) with the Senator Chronometer Limited Edition 2020:

(The Glashütte Original Senator Chronometer Edition 2020; image © Glashütte Original) I used above official press image for a good reason as it shows the delineation of the design refresh from the company’s own marine chronometers, timekeepers of highest repute: the power reserve at 12, the small seconds at 6 o’clock, respectively, are known from previous versions. New is the case with a concave bezel, opening up the dial area at constant case diameter, and with a knurled edge that (at the original clock) helped griping it. 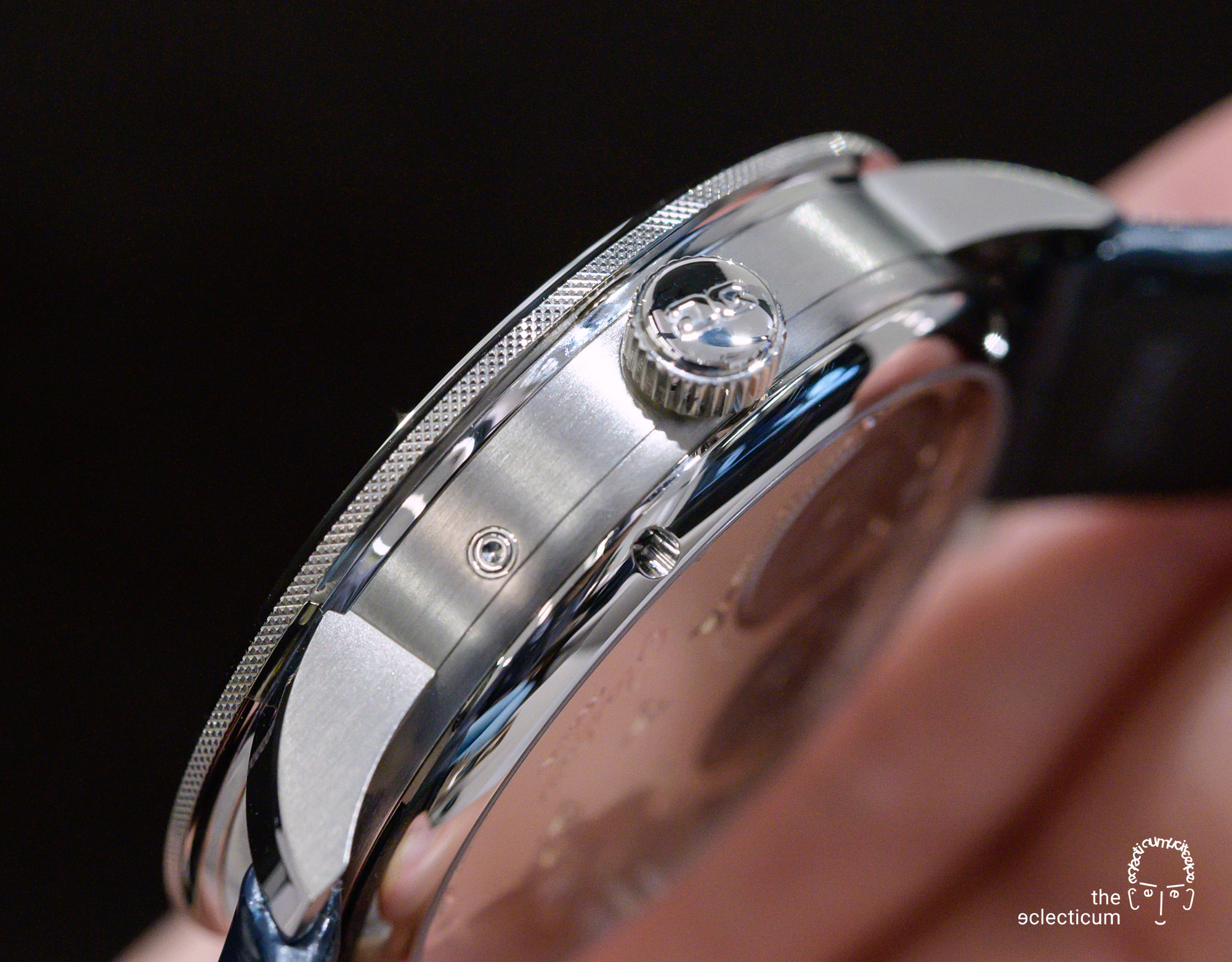 (The new Glashütte Original Senator Chronometer bezel) The dial itself is a treat as well: opaque-silver, with extremely fine grain, and surprisingly precise indices that show hints of 3D structure, resembling a bit (but being much finer defined) the enamel inscriptions of vintage Patek Philippe or Vacheron Constantin (amongst others) dials.

The polar opposite of it, finely polished heat-blued ‘pear’-shaped hands indicate the time on these dials (note also the capped and polished pinion holes) – overall, a very rich and interesting assembly: 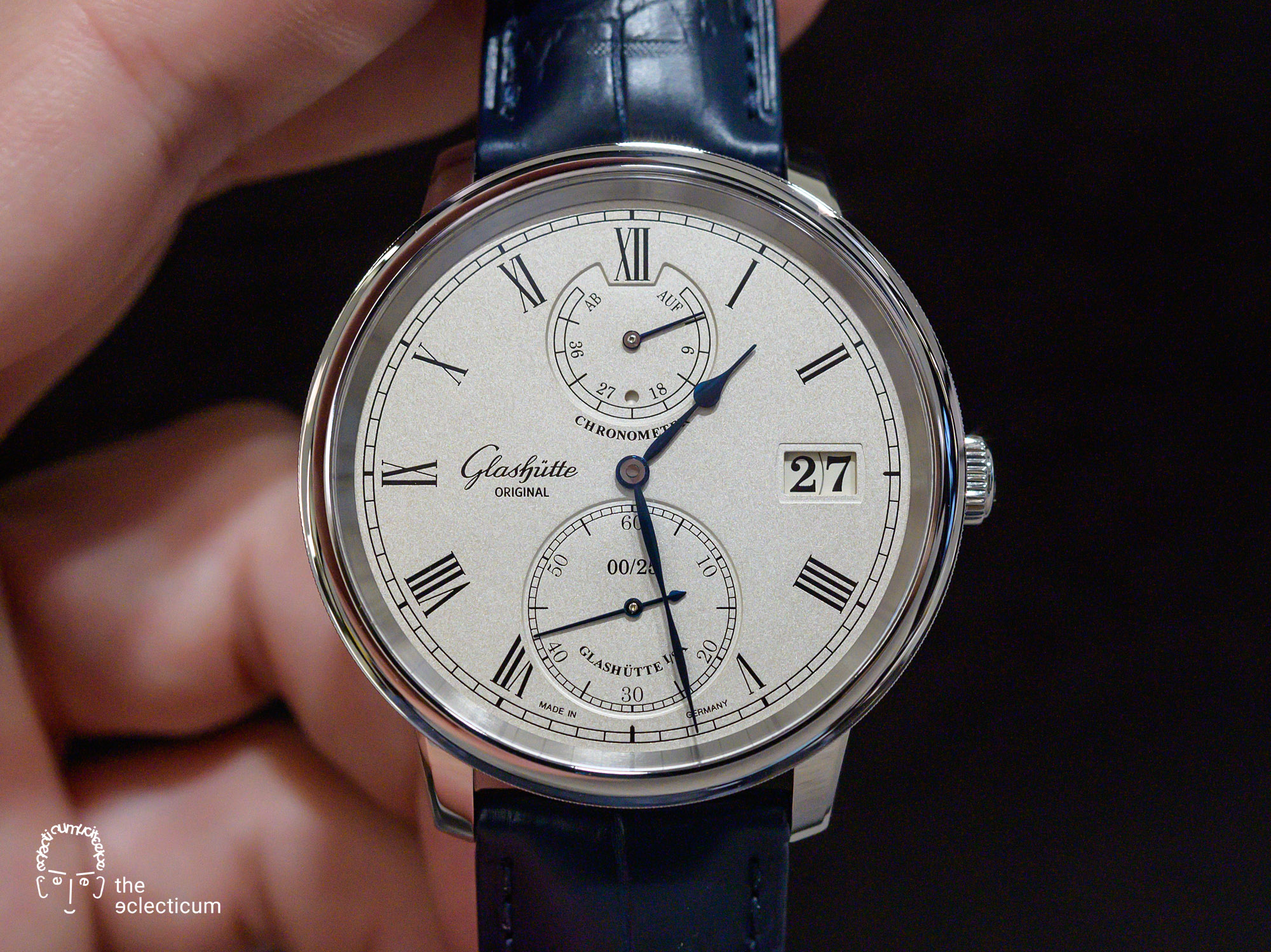 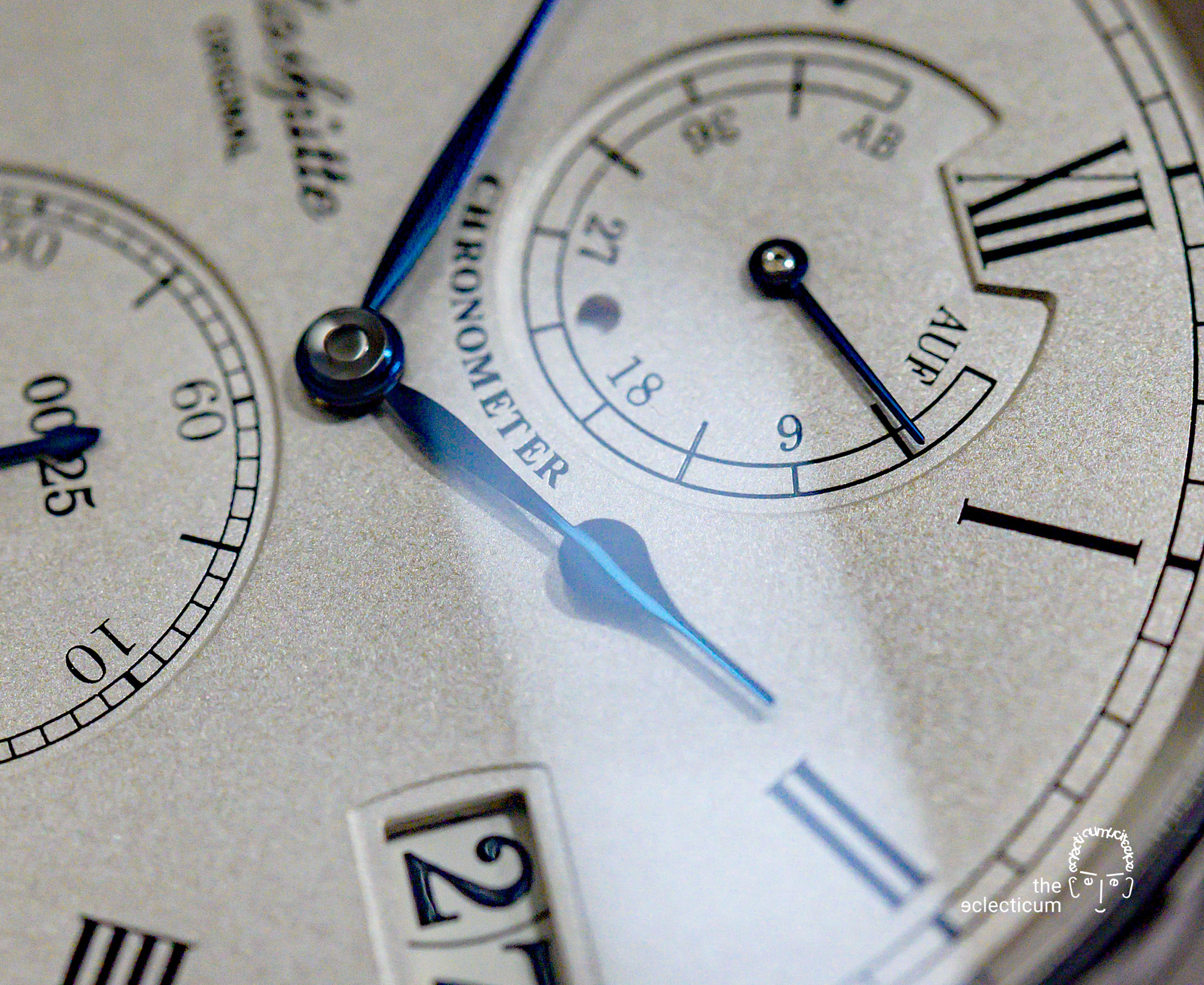 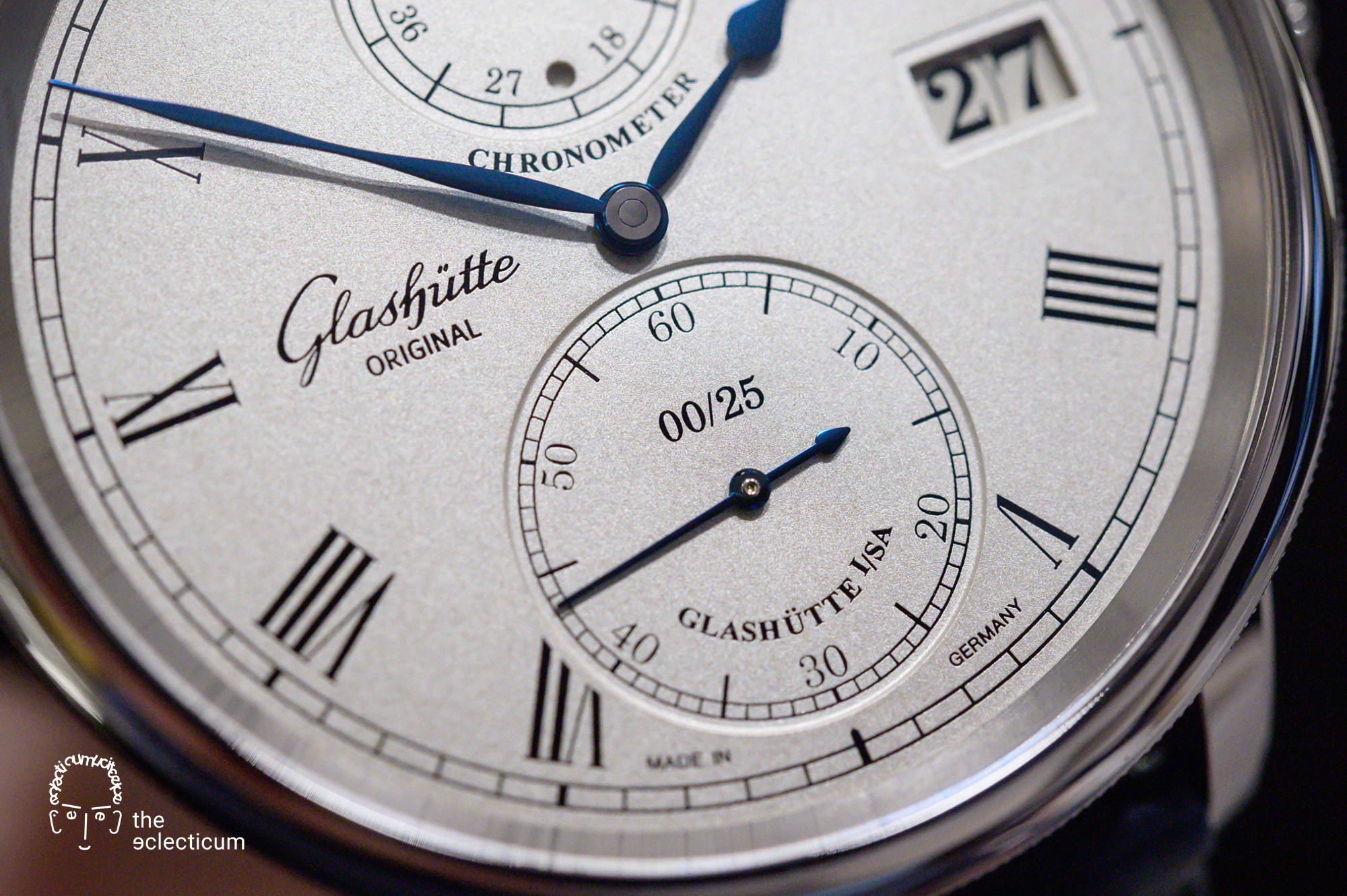 (Details of the Glashütte Original Senator Chronometer 2020 Limited Edition dials and hands) The dials are a specialty of Saxon watchmaking, and are made in a traditional manual technique called (a bit awkward in English) ‘silver plating by friction’ – essentially, a solid gold dial base is engraved with the indices which are then sealed with shellac, and subsequently a defined mixture of fine silver powder, salt and water is rubbed on the dial by hand with a brush, yielding a matte-shiny surface of particular refinement:

(Friction-plating of silver on a gold dial; image © Glashütte Original) The technique of frictional silver plating is perpetuated at the watchmaker’s own dial manufactory in Pforzheim.

But the dial is not the only area where (a variation of) this technique is employed: Also, the movement (now called Cal. 58-03, otherwise identical to 58-01) which’s ¾ plate is equally first silver plated and subsequently given a rose gold coating – a sight to behold: 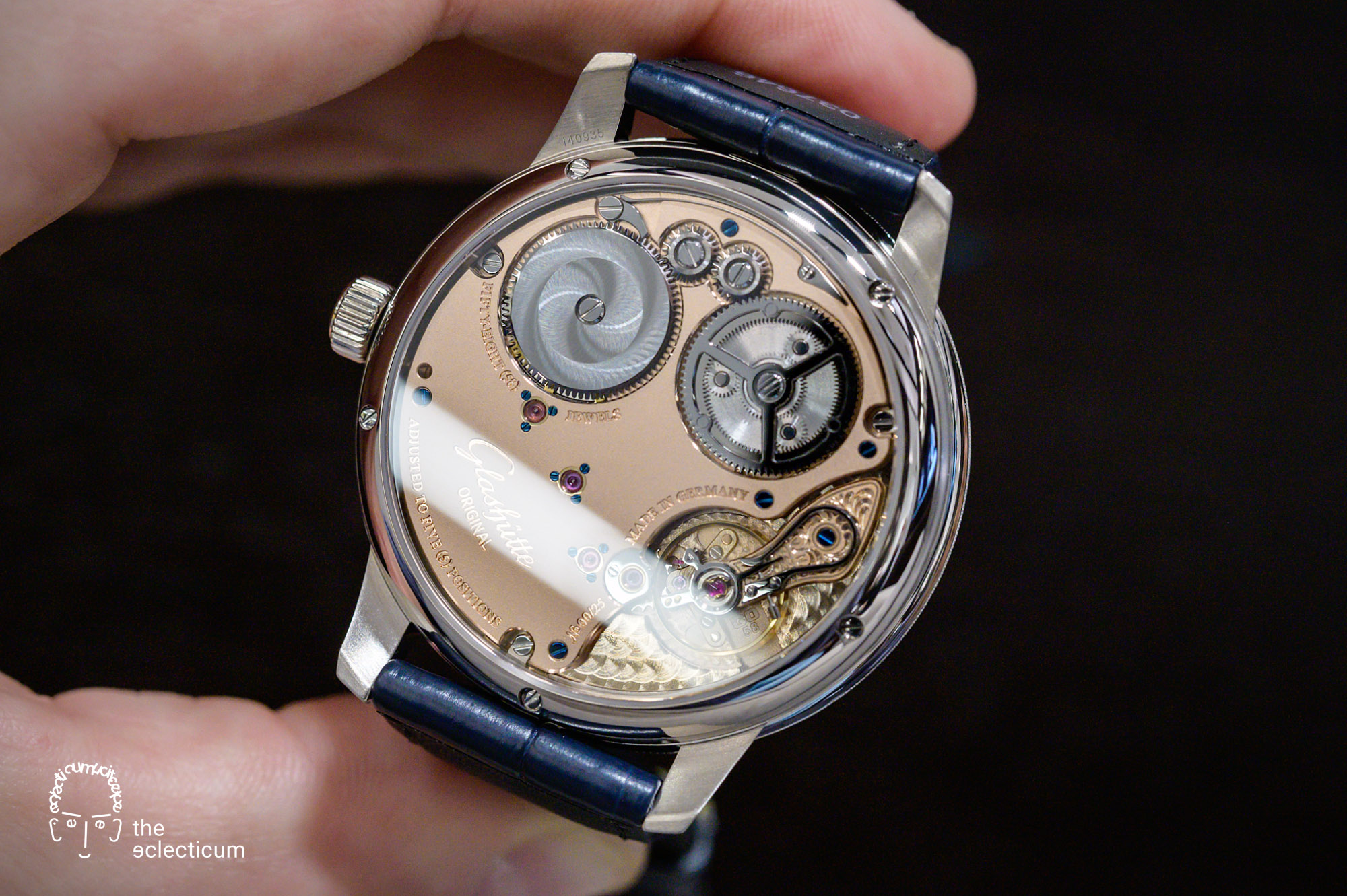 What a wonderful view, just a few more images for your enjoyment: 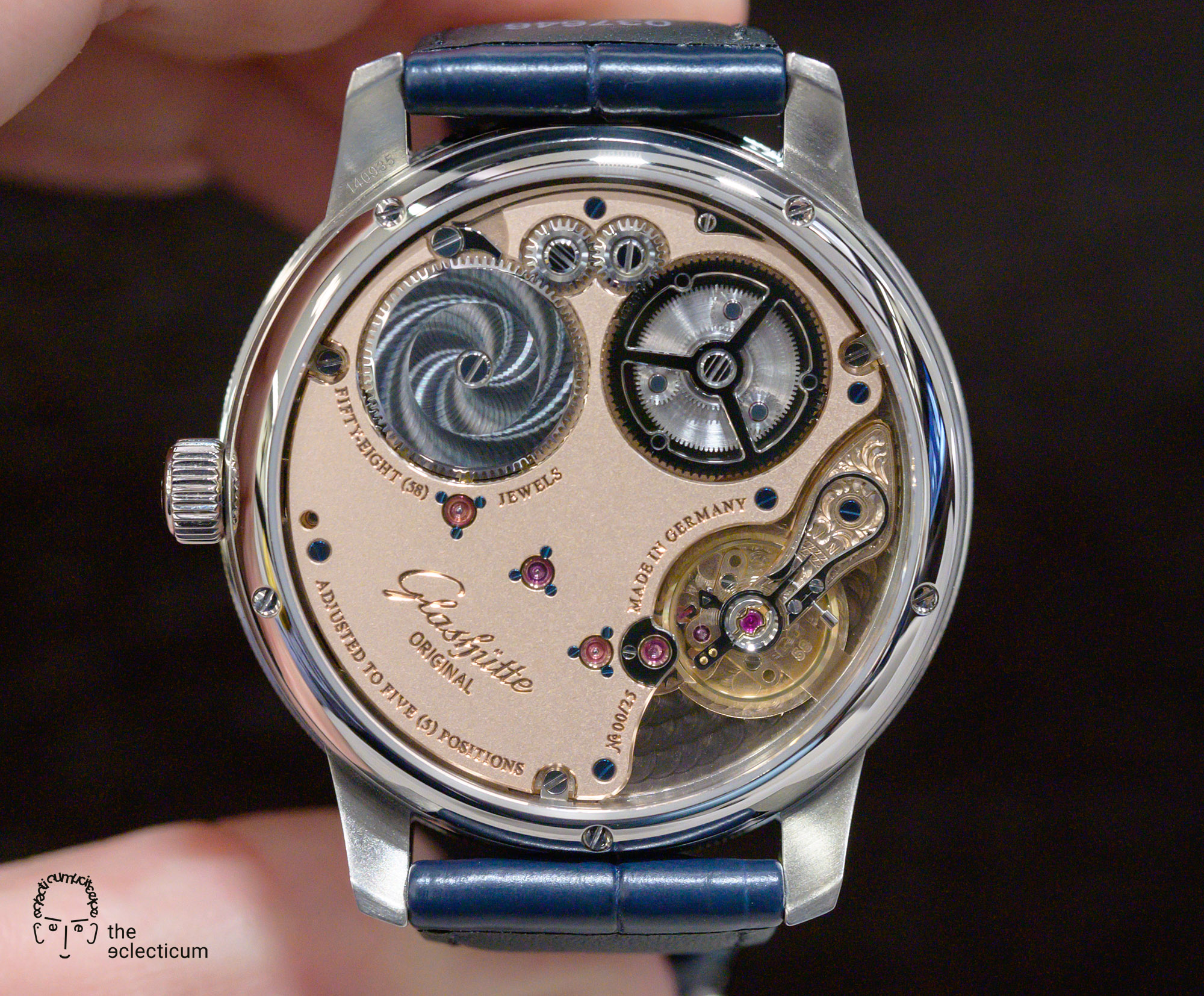 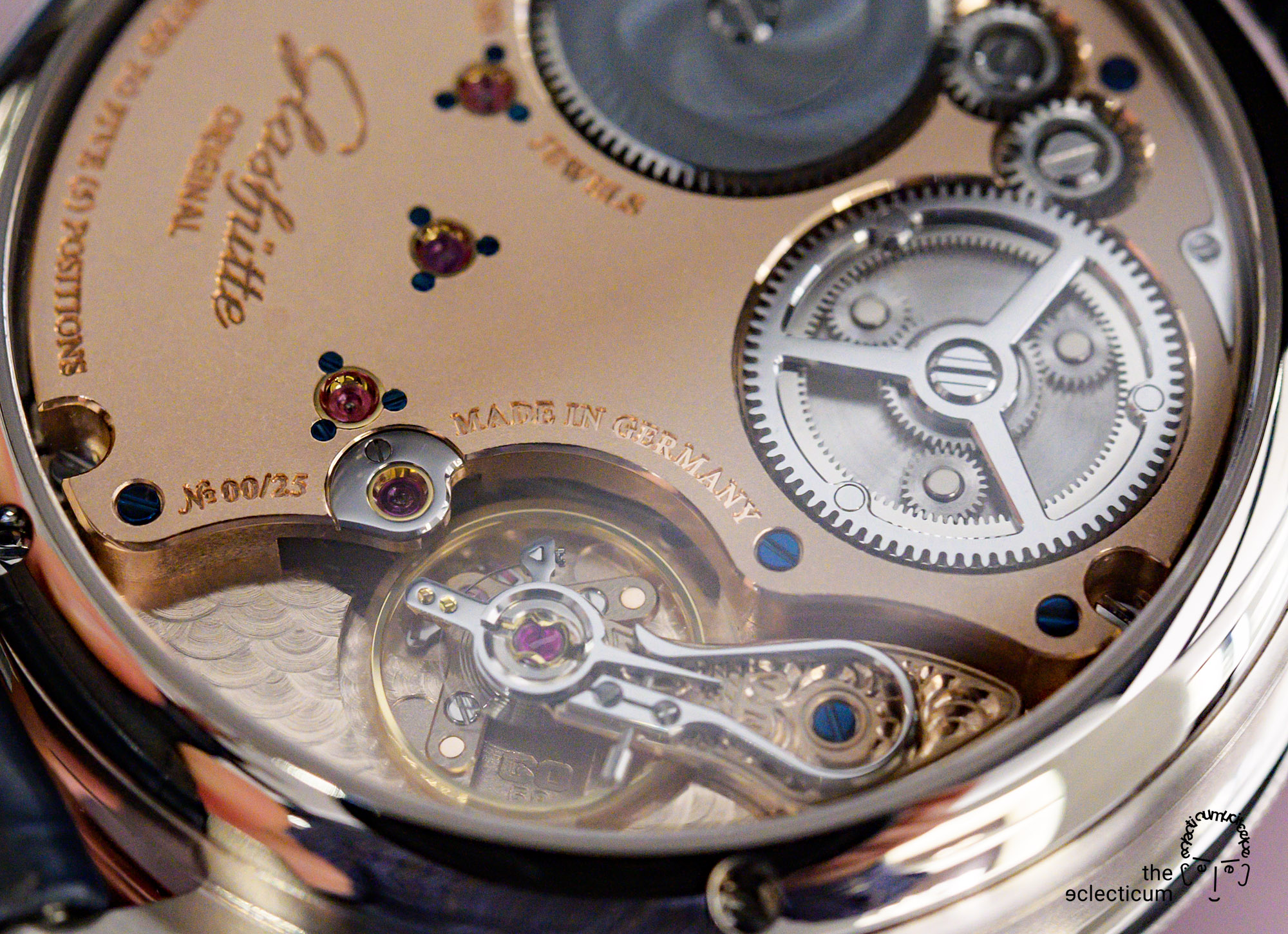 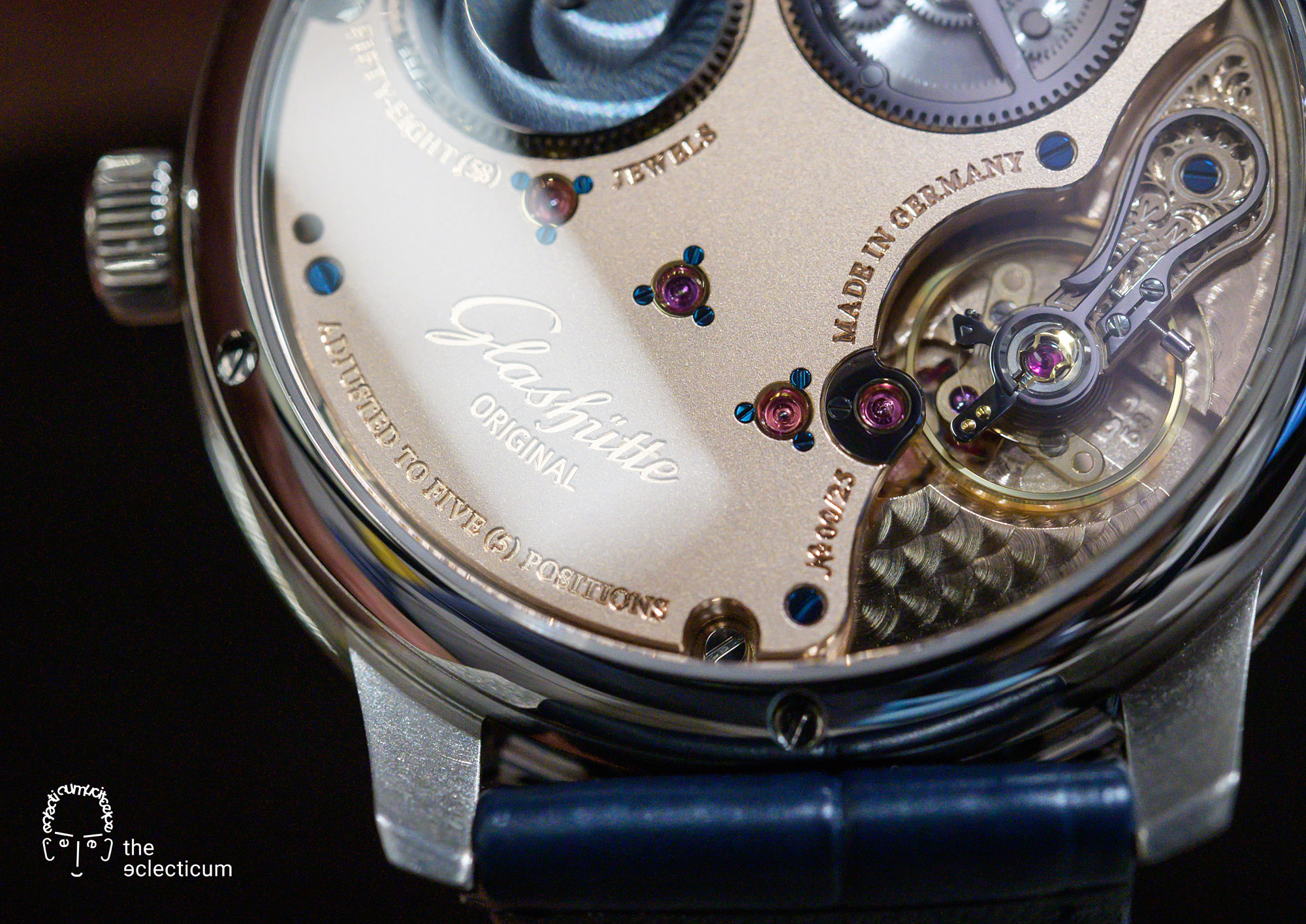 (Details showing the perfectly crafted movement elements) When I had the privilege to preview the watch a few weeks back my heart beat up heavenly – this is how Glashütte Original should have introduced the Chronometer in the first place! 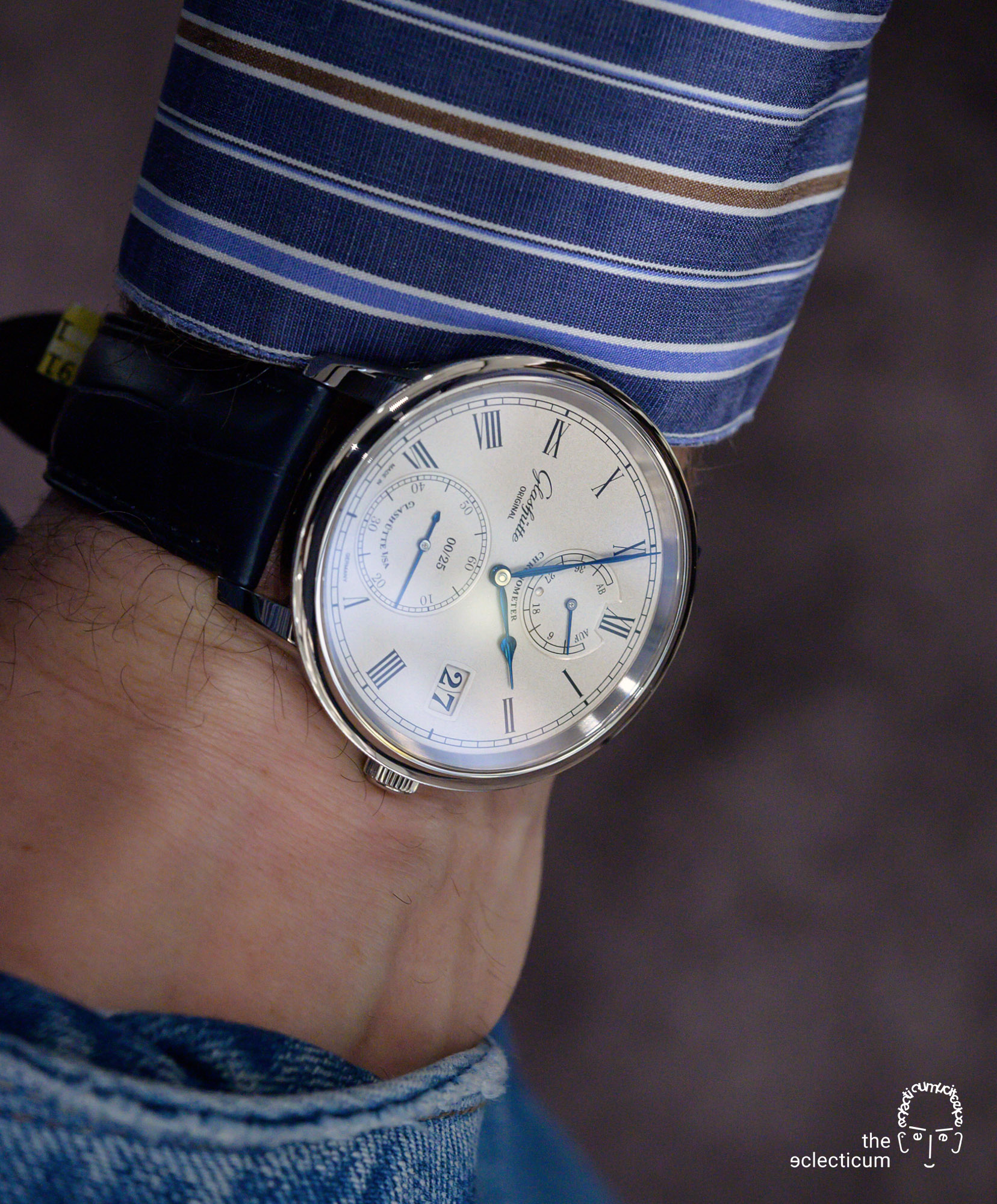 I mean, if you construct an advanced movement with refinements that only reveal themselves once you touch, feel and use a watch, you should make an aesthetic statement (design, finishing) at the same time.

Now, with the Limited Edition, Glashütte Original did exactly that: present something that strikes immediately ‘special’ that does however do so not in an obscene way. The concave, knurled bezel, and the movement finishing, all this really completes the Senator Chronometer, turns it into a still subtle masterpiece, but something which is self-assured and confident. 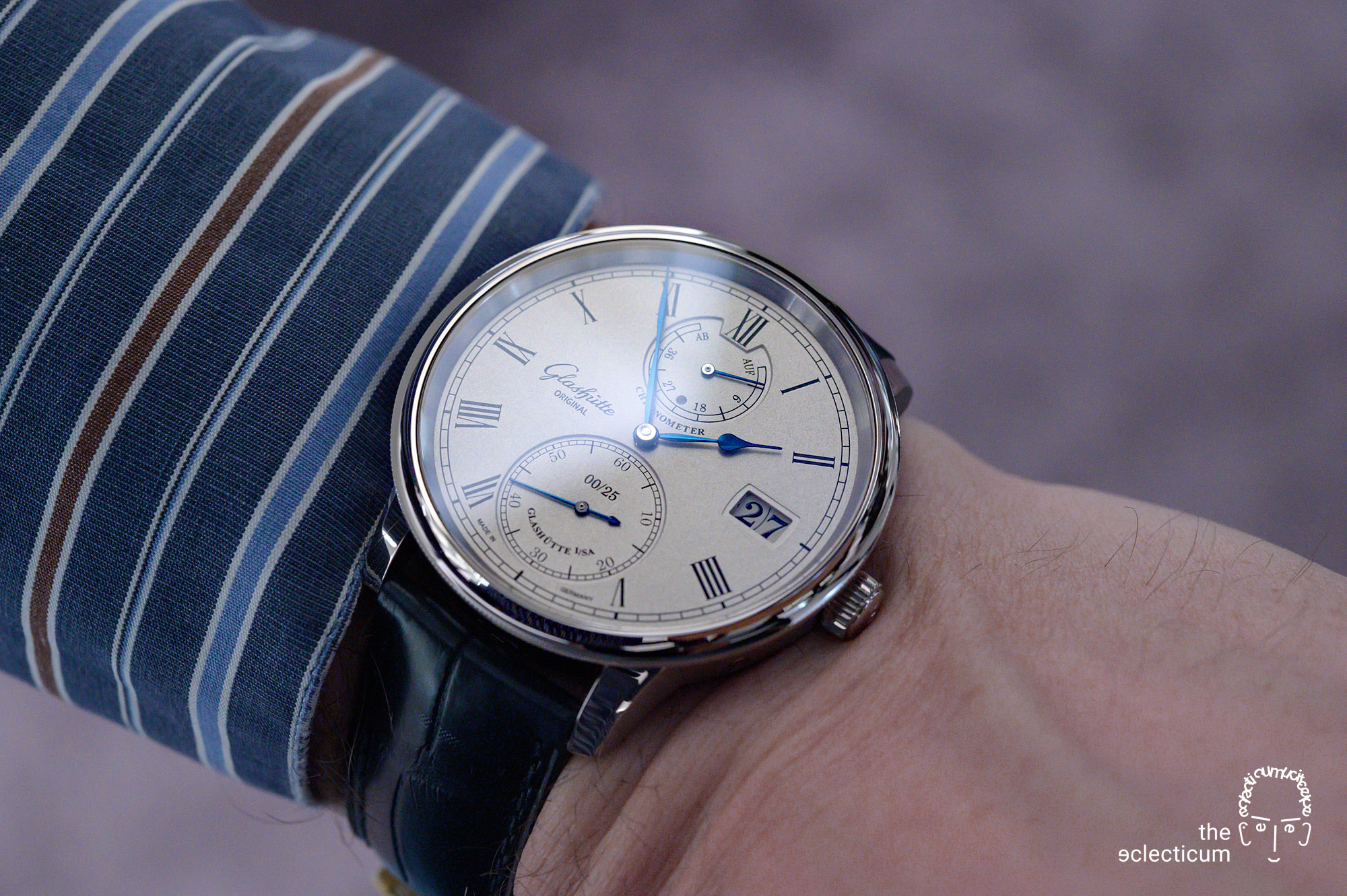 In the end, the Glashütte Original Senator Limited Edition 2020 finally recalls the fine special editions we have missed so much from the manufacturer: does Julius Assmann ring a bell? A series of eclectic, at times perhaps a bit on the exuberant side, interpretations of fine wristwatches. We missed them for so long we almost forgot that the brand is able to go a bit out of their own mainstream…

Montblanc: Hands-On with the new 1858 Monopusher Chronograph
Scroll to top