In a trend to return to ‘reasonable’ sizes, the new IWC’s Big Pilot’s Watch 43 hits a perfect middle ground, but it may also be the real ‘PuristS’ Choice’… 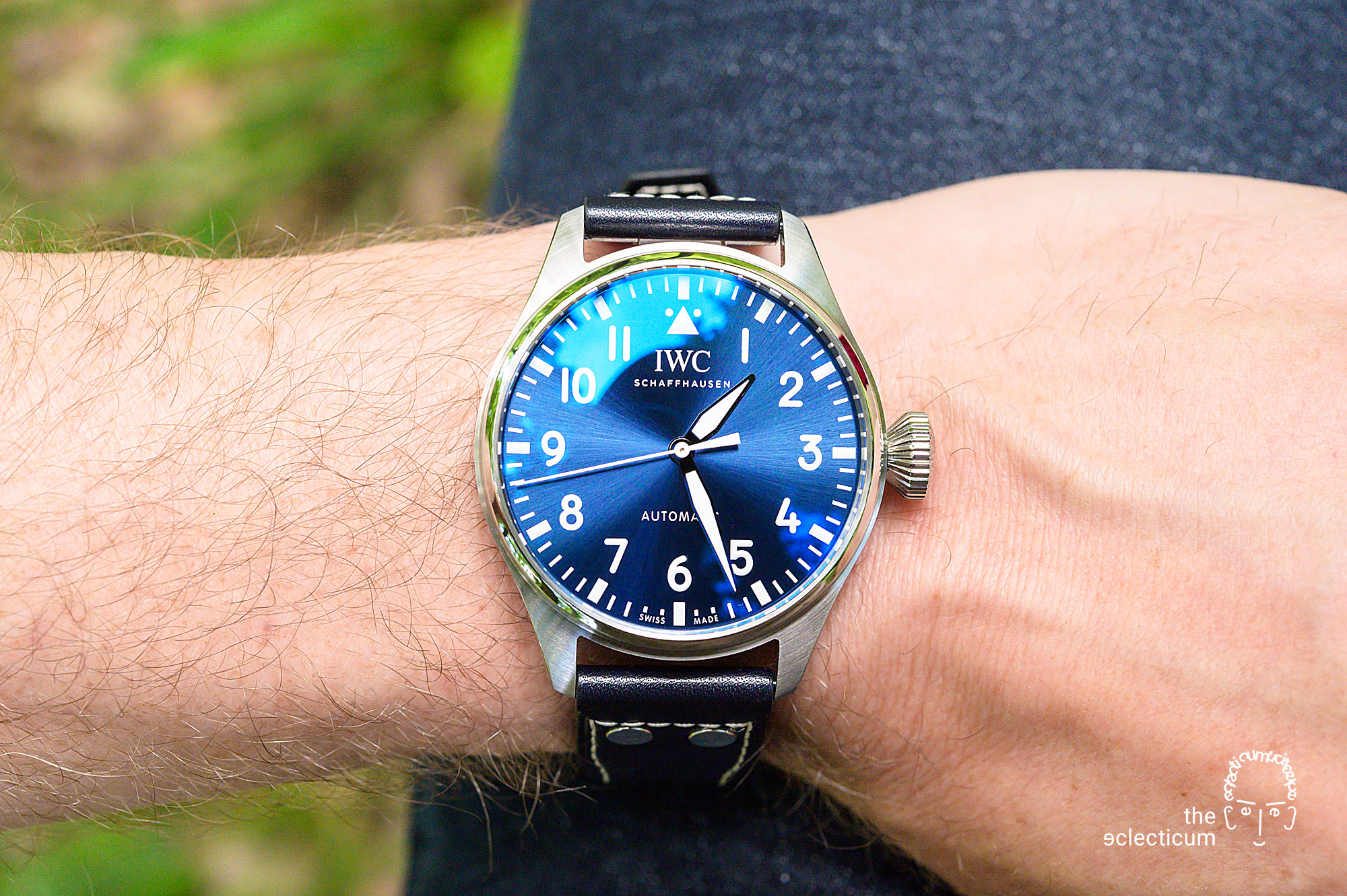 IWC’s 46+mm Big Pilot’s Watch (how aptly named!) is one of those landmark pieces in watchmaking:  presented in 2002, it was a bold move with its large diameter and its innovative automatic movement of commensurate dimension (and power reserve), a watch with was as much a masculine statement as a credible heir of IWC’s pilot watch history, namely the Ref. IW436 from the 1940s.

The Big Pilot’s Watch has become a mainstay in IWC’s line-up, and over the years enjoyed many iterations, improvements, and extensions. When the brand recently began to present smaller versions of their most recognisable pieces, such as the 40mm Portugieser or – more recently even – the (41mm) Pilot’s Chronograph 41 it was to be expected that the Pilot’s range would receive similar attention; after all, there was a 5mm gap to fill between the Mark XVIII and the – Big! – Pilot’s Watches.

As the name already provides, this is a 43mm watch – something between ‘normal’ and ‘large’. It’s a barebones watch, displaying only the hours, minutes and second, with no date (yes!) and thus is the ‘purest’ of all current IWC Pilot’s Watches. The watch comes in two dial variations, (matte) black and (sunburst) blue, and we had the latter in for this review. 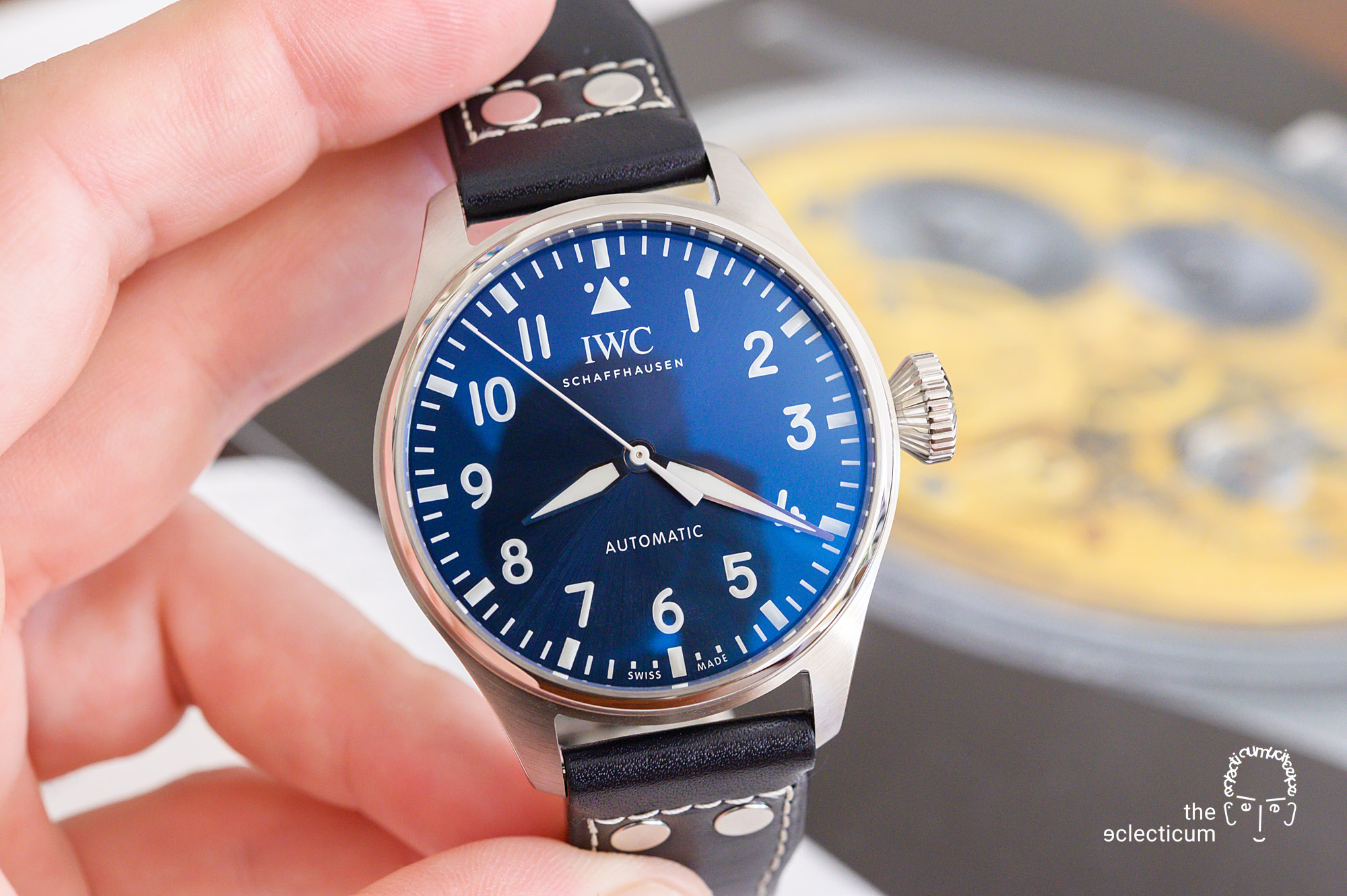 Likewise, the remainder of the habillage signals business, with bold, luminous lancet hands and Arabic indices. The lack of superfluous inscriptions (again, yes!), the 12 o’clock dotted triangle and the enormous dial opening (thanks to a slim bezel) add to the fantastic legibility. 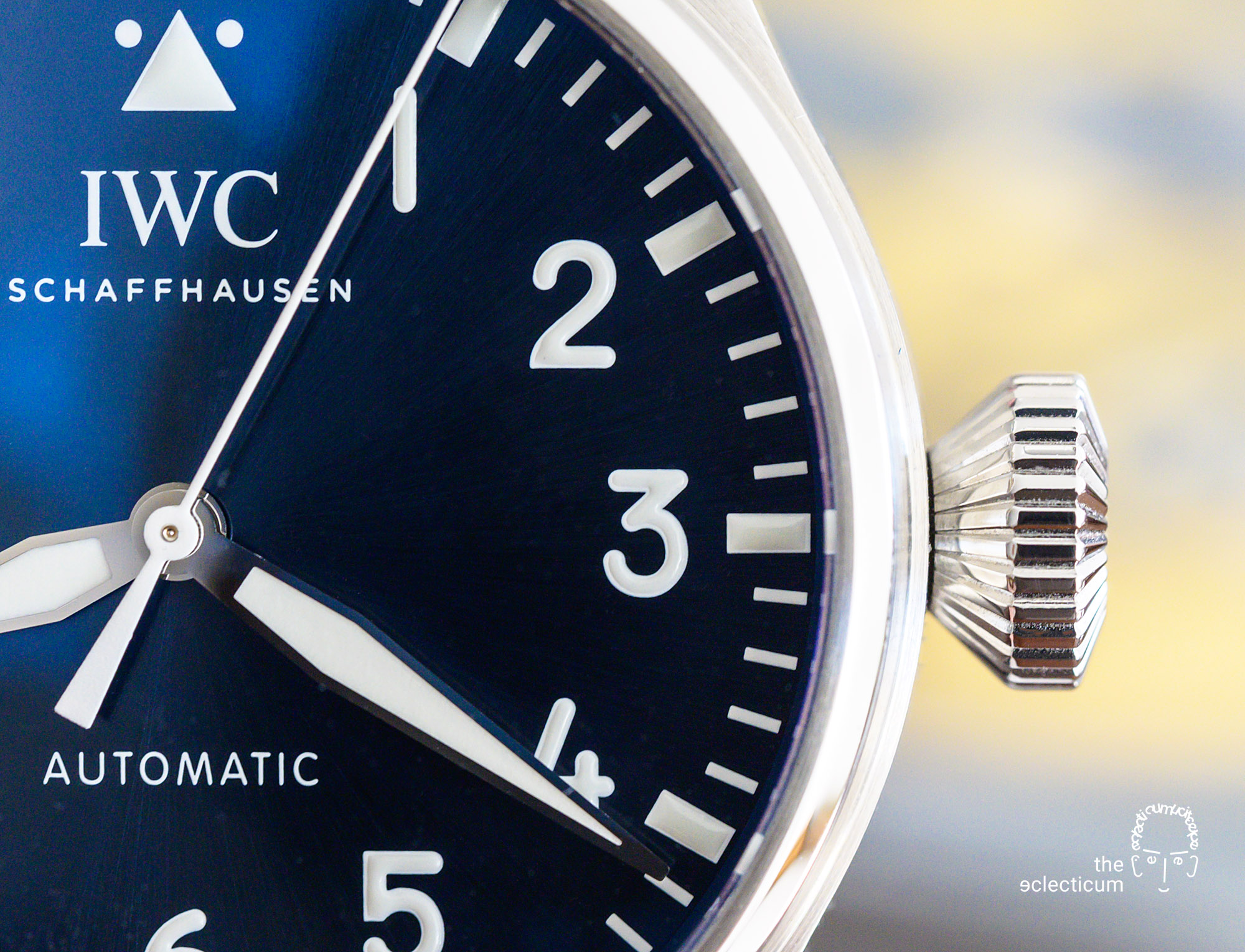 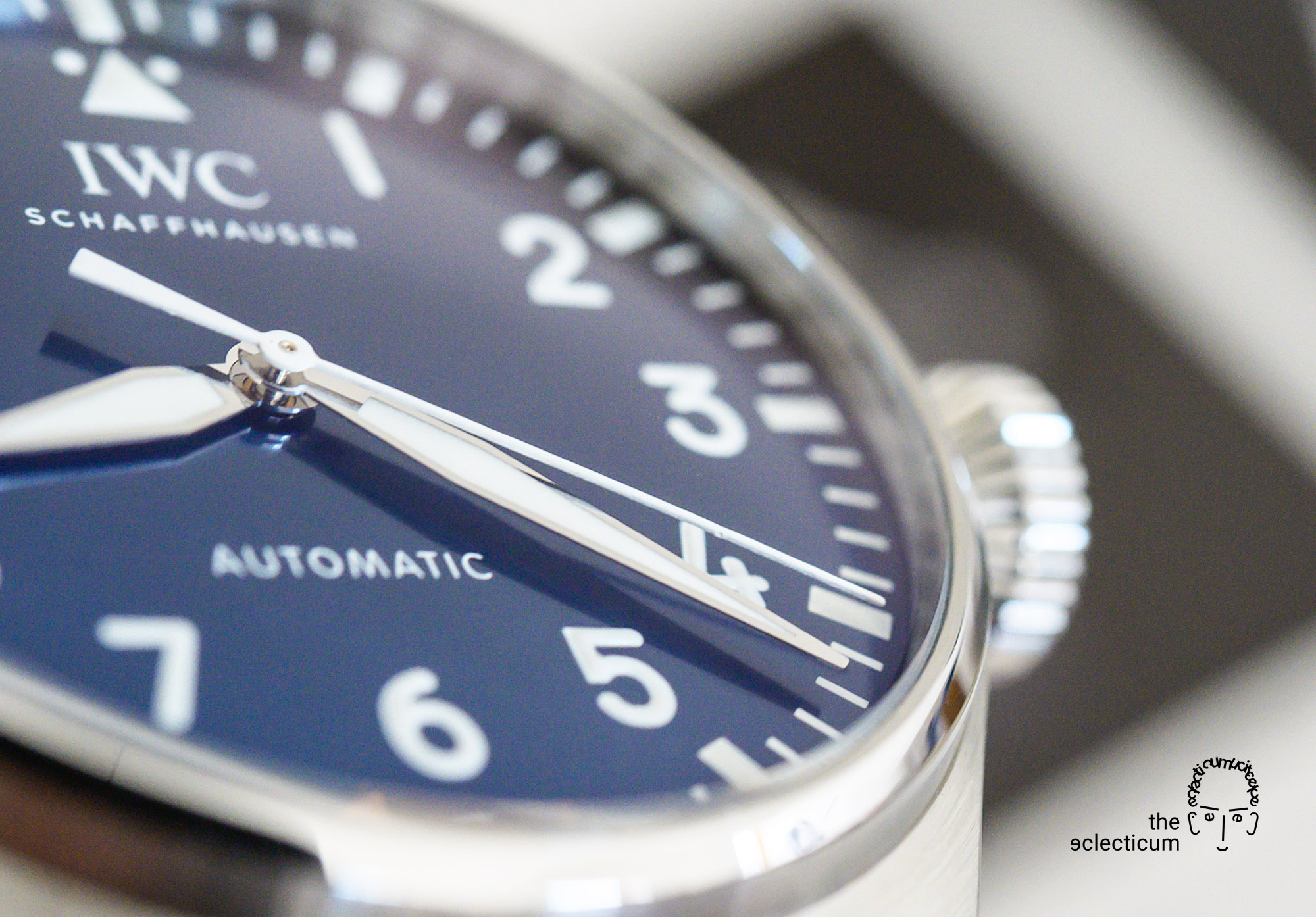 In contrast to the smaller chronograph brother, the Big Pilot 43 has a rich night-time signature: 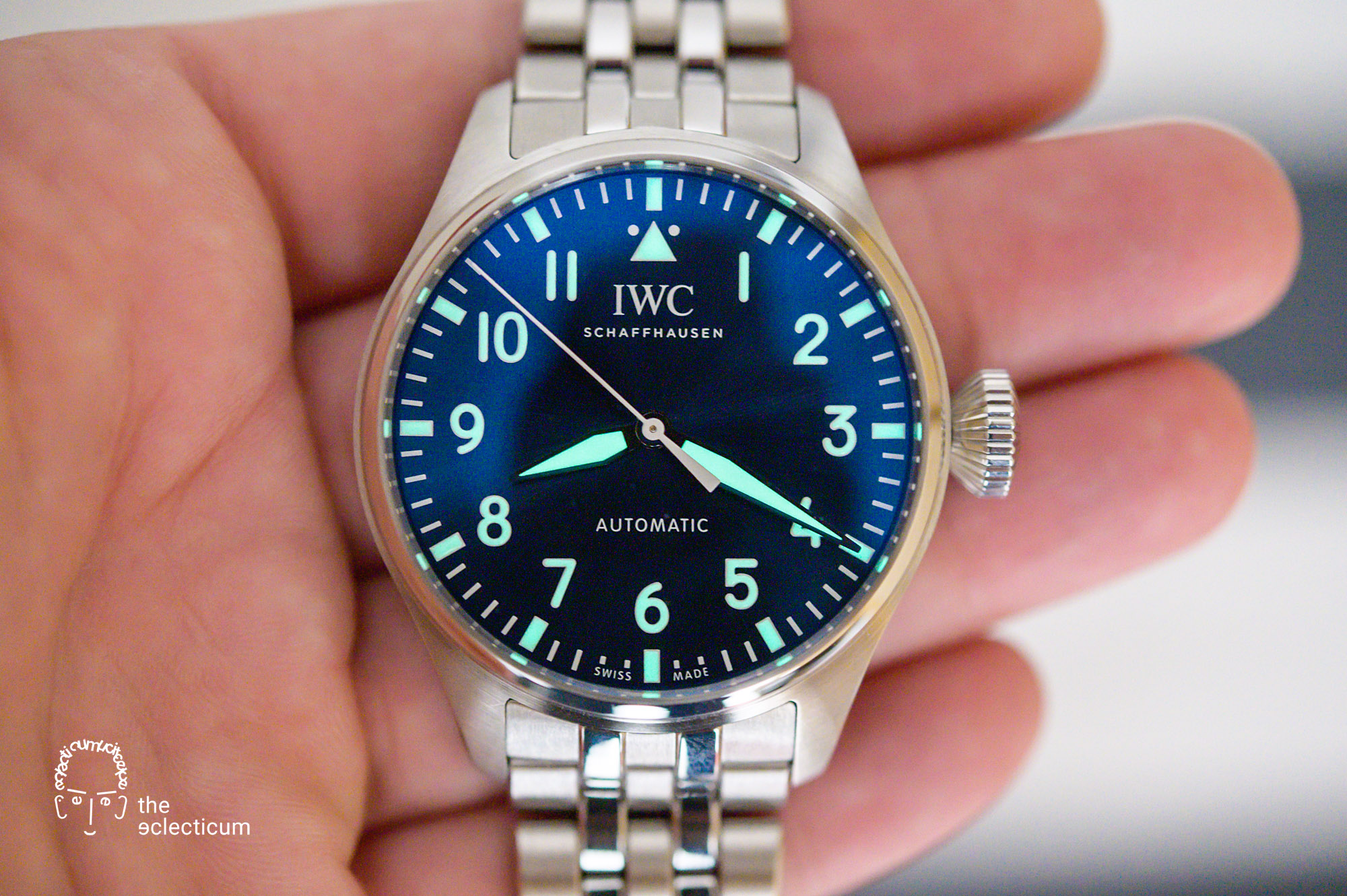 The business attire extends to the stainless-steel, 43 x 13.6mm case, a typical IWC pilot’s construction, a two-piece affair (the bezel is integrated into the case body), robust (100m watertight plus the sapphire is protected from popping off when air pressure drops) and well made. The juxtaposition of brushed and polished surfaces adds to the depth of the case, and is finished in an exacting way: 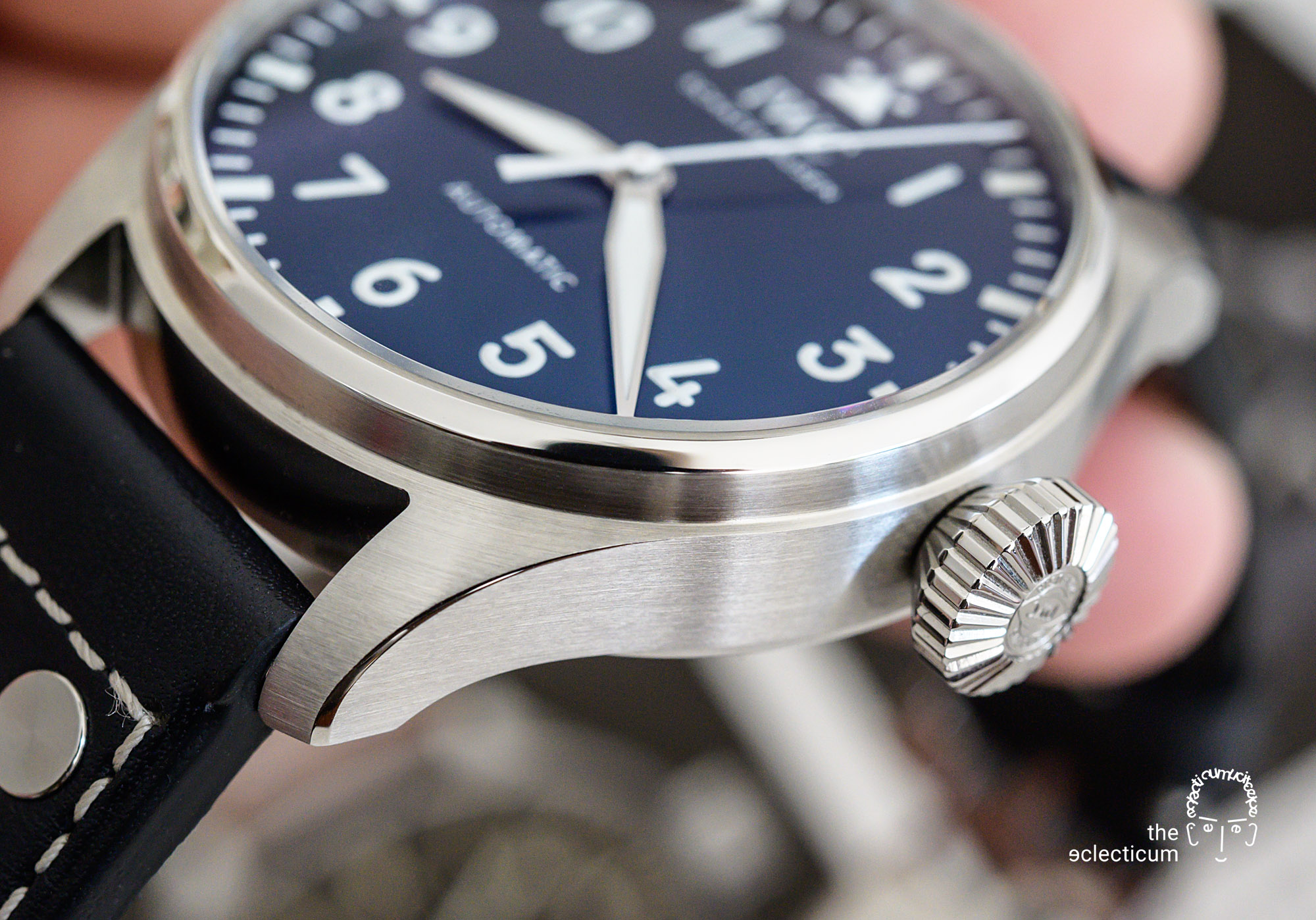 Like all larger IWC Pilot’s Watches, the ‘43’ comes with a large ‘diamond’-shaped crown. When presenting the watch, IWC’s CEO Chris Grainger-Herr stressed how ergonomic considerations drove designing the watch and referred particularly to the crown dimensions which balance ease of grip with comfort on the wrist. Indeed, despite its diameter it does not poke onto one’s skin. 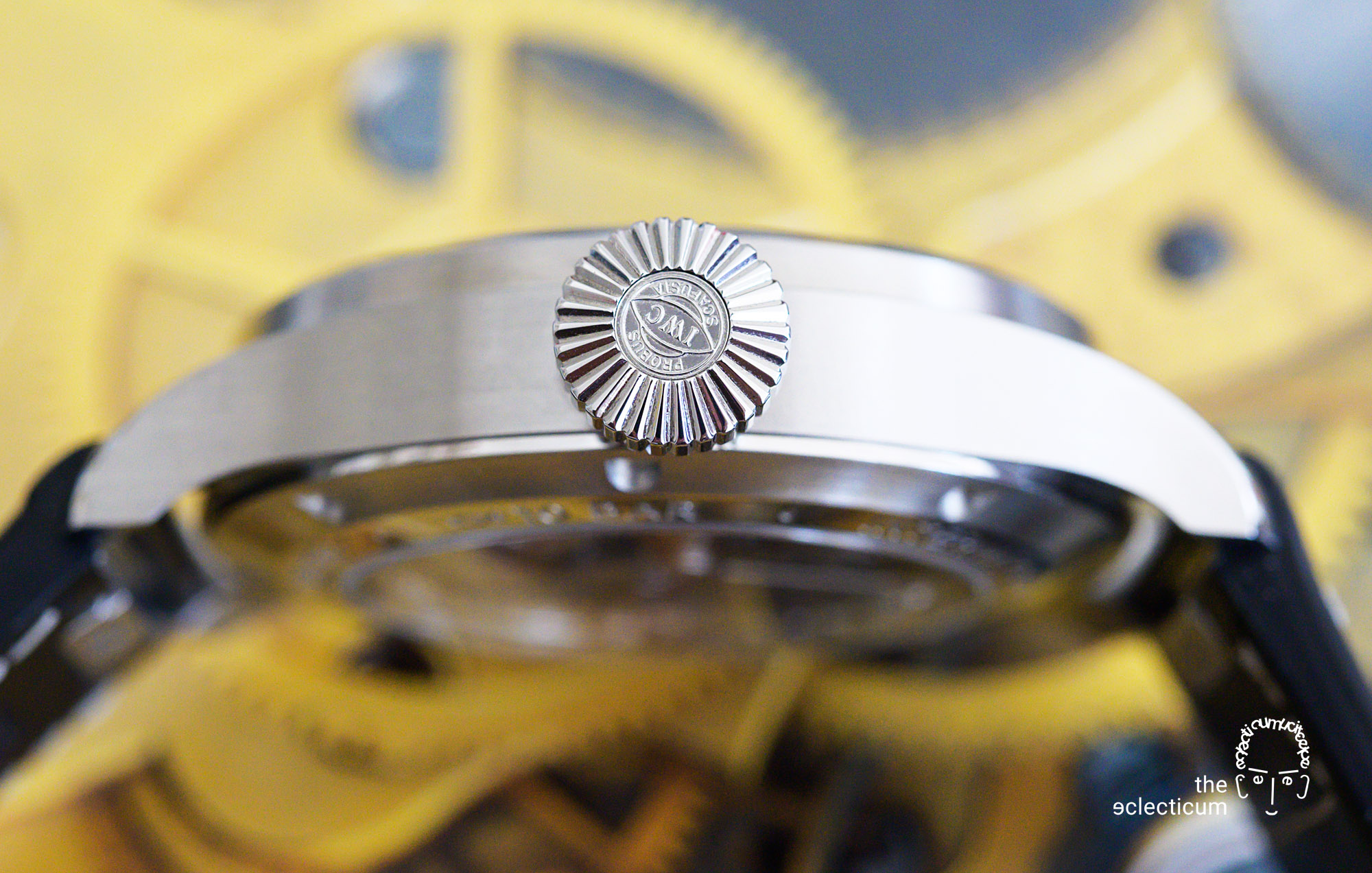 The crown is screw-in, contributing to the 100m water resistance of the watch. The ‘Probus Scafusia’ inscription however does not line up with the case. 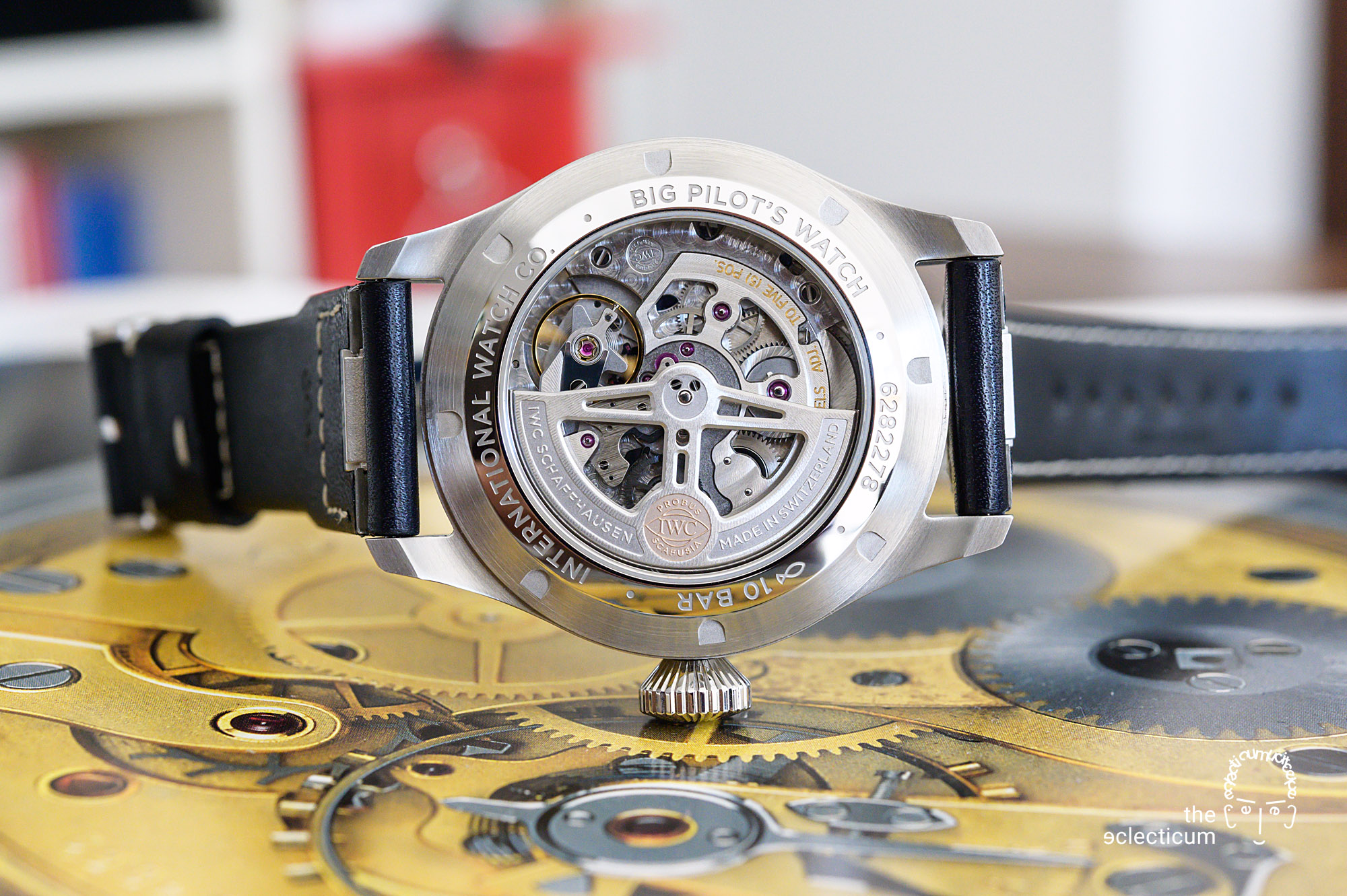 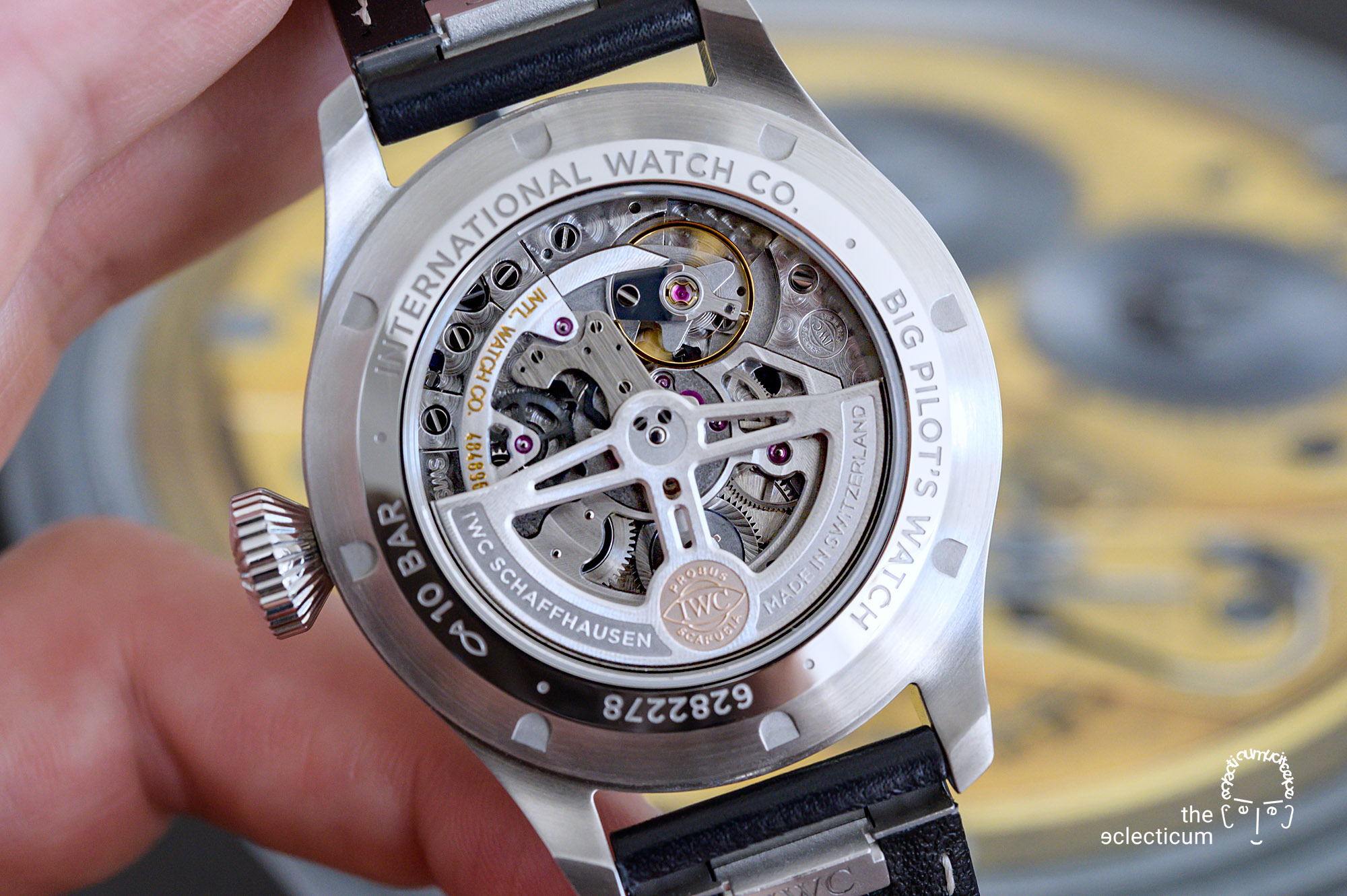 The Big Pilot’s Watch 43 is driven by a new member of the movement family, the Cal. 81000, which differs from the others by its central seconds. 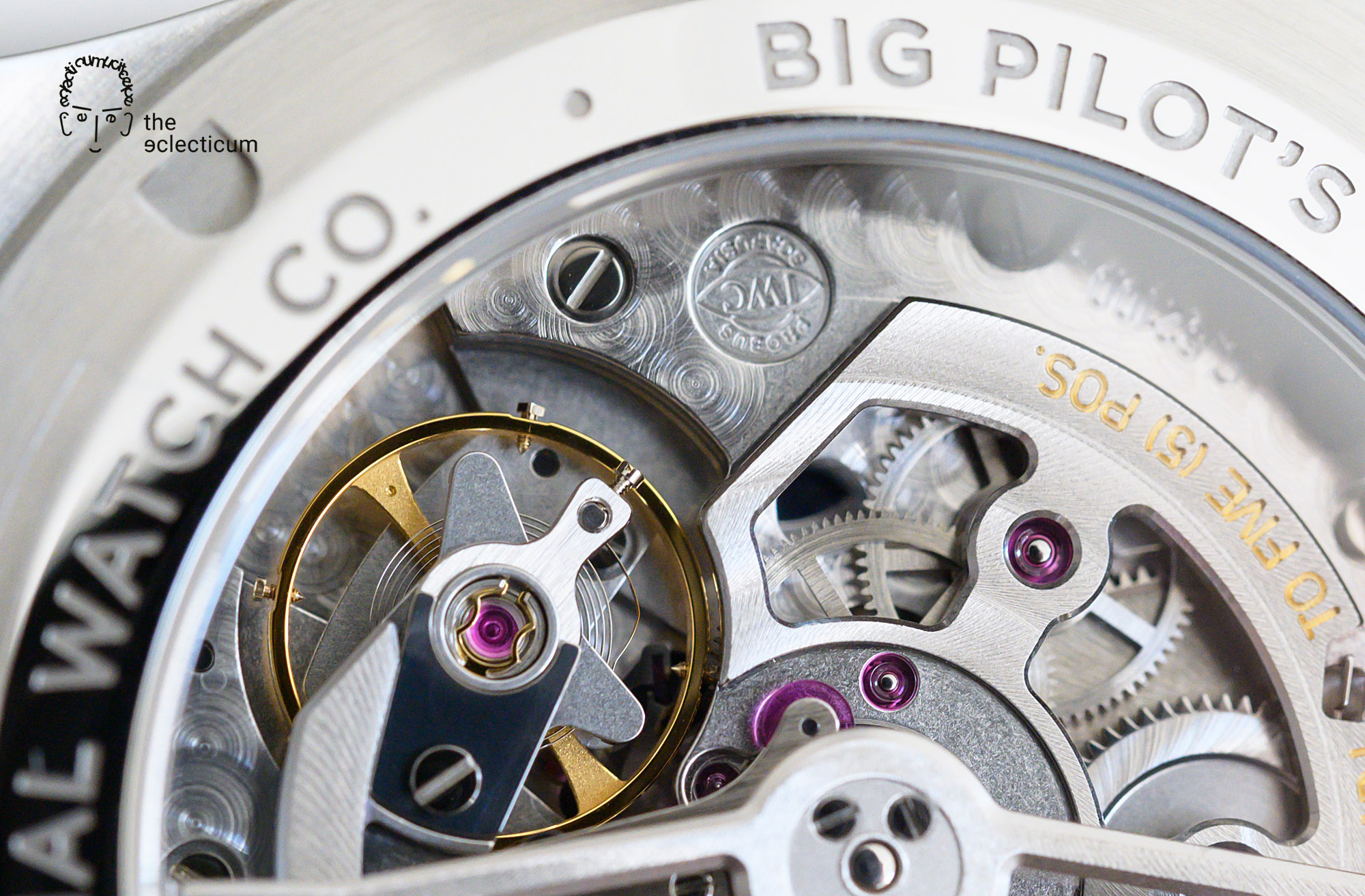 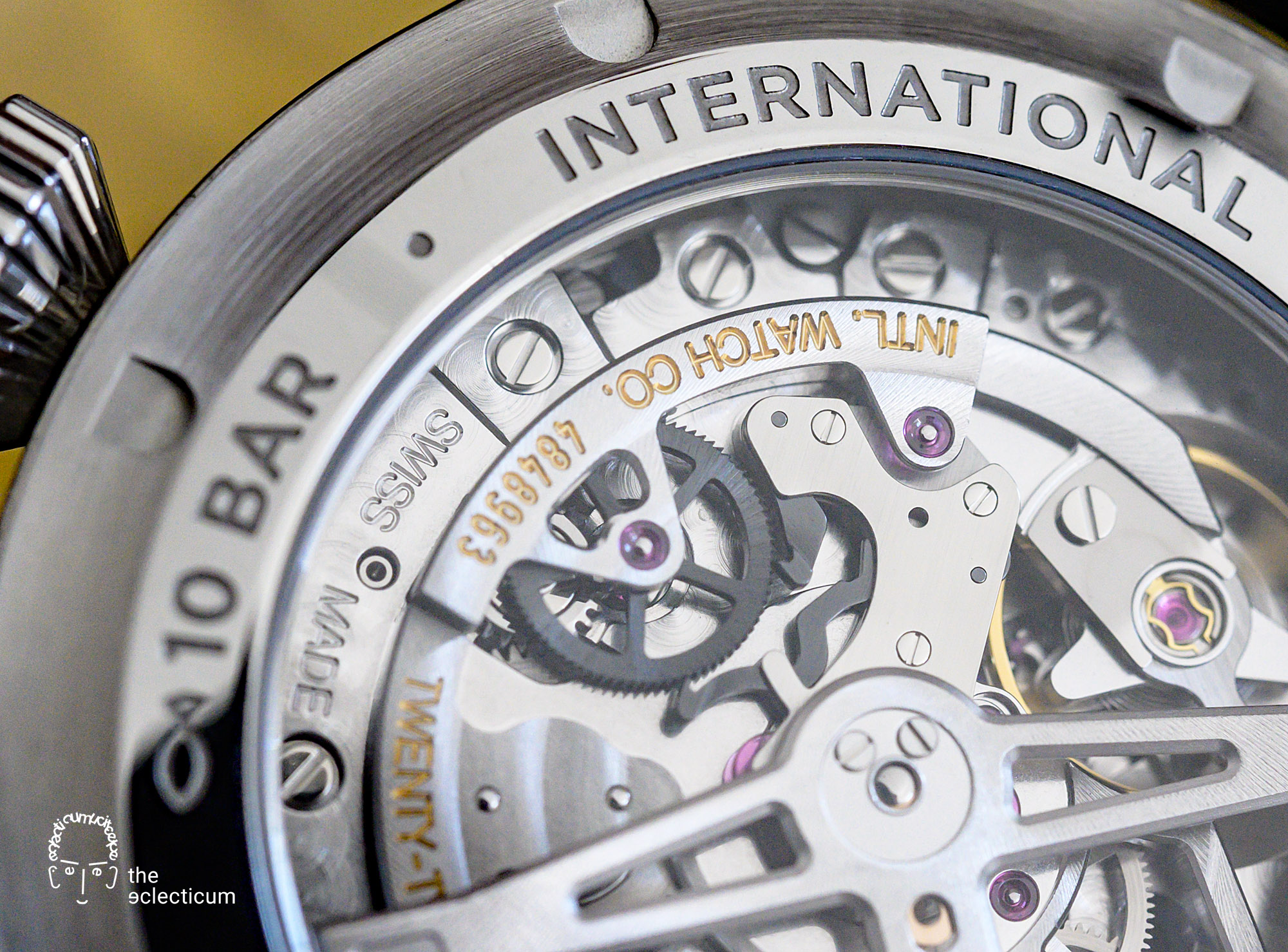 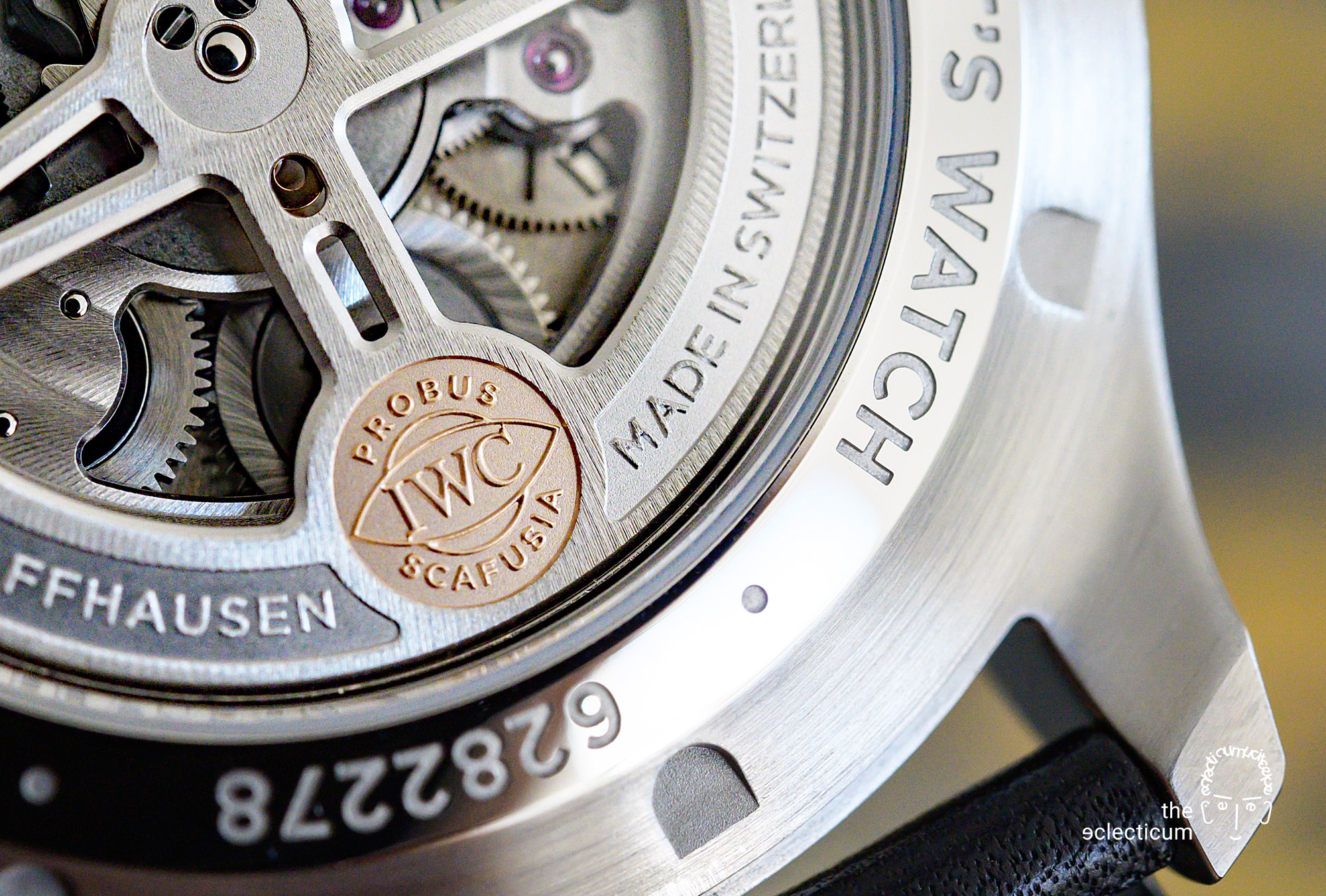 (Details of the Cal. 81000 – from top: freesprung balance, Pellaton winding system, rotor with ‘Probus Scafusia’ plaquette) And just like with the chronograph version, also the ‘43’ offers IWC’s excellent quick release system EasX-CHANGE, which makes switching between straps and bracelets a (tool-less) breeze: 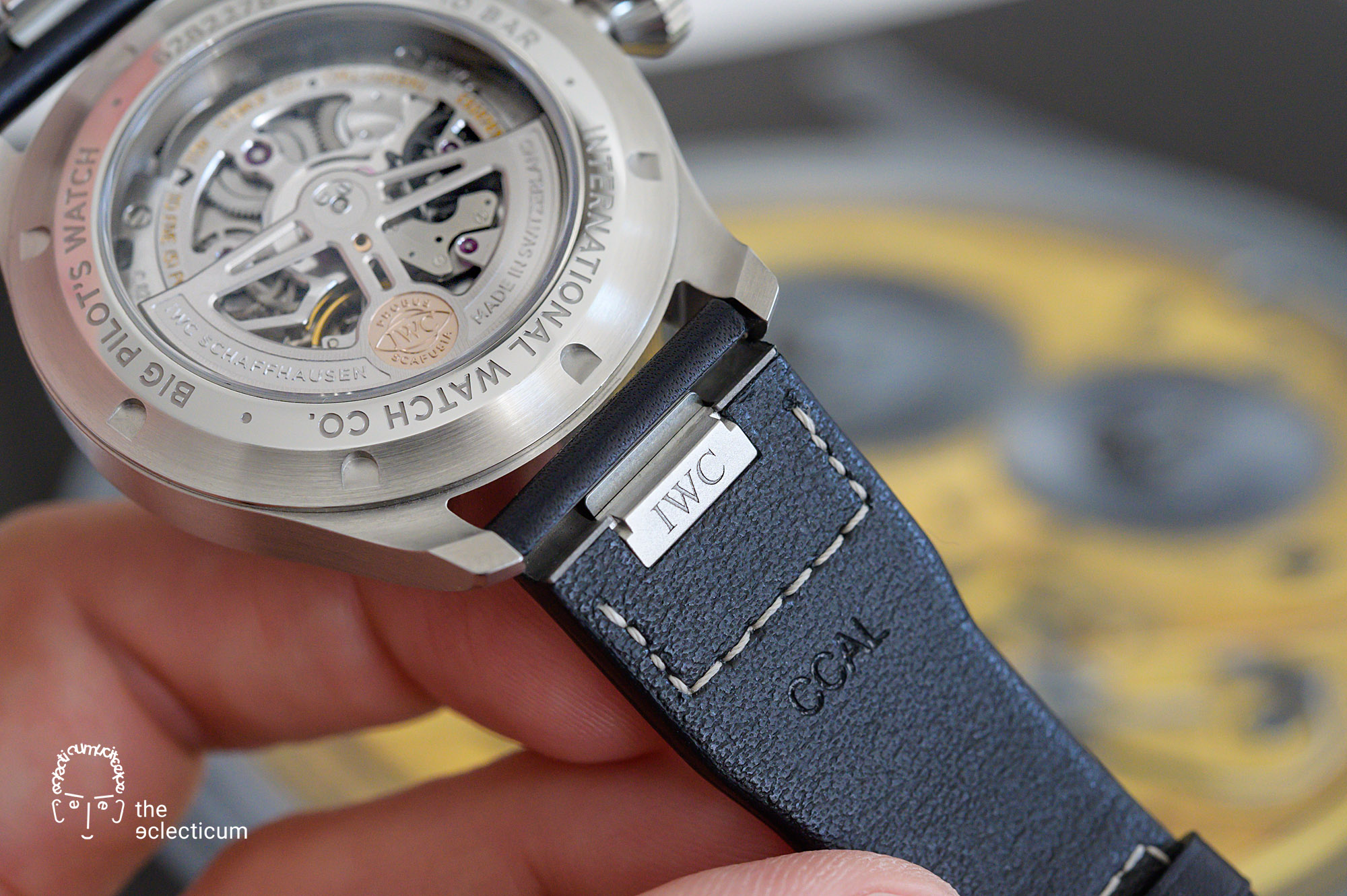 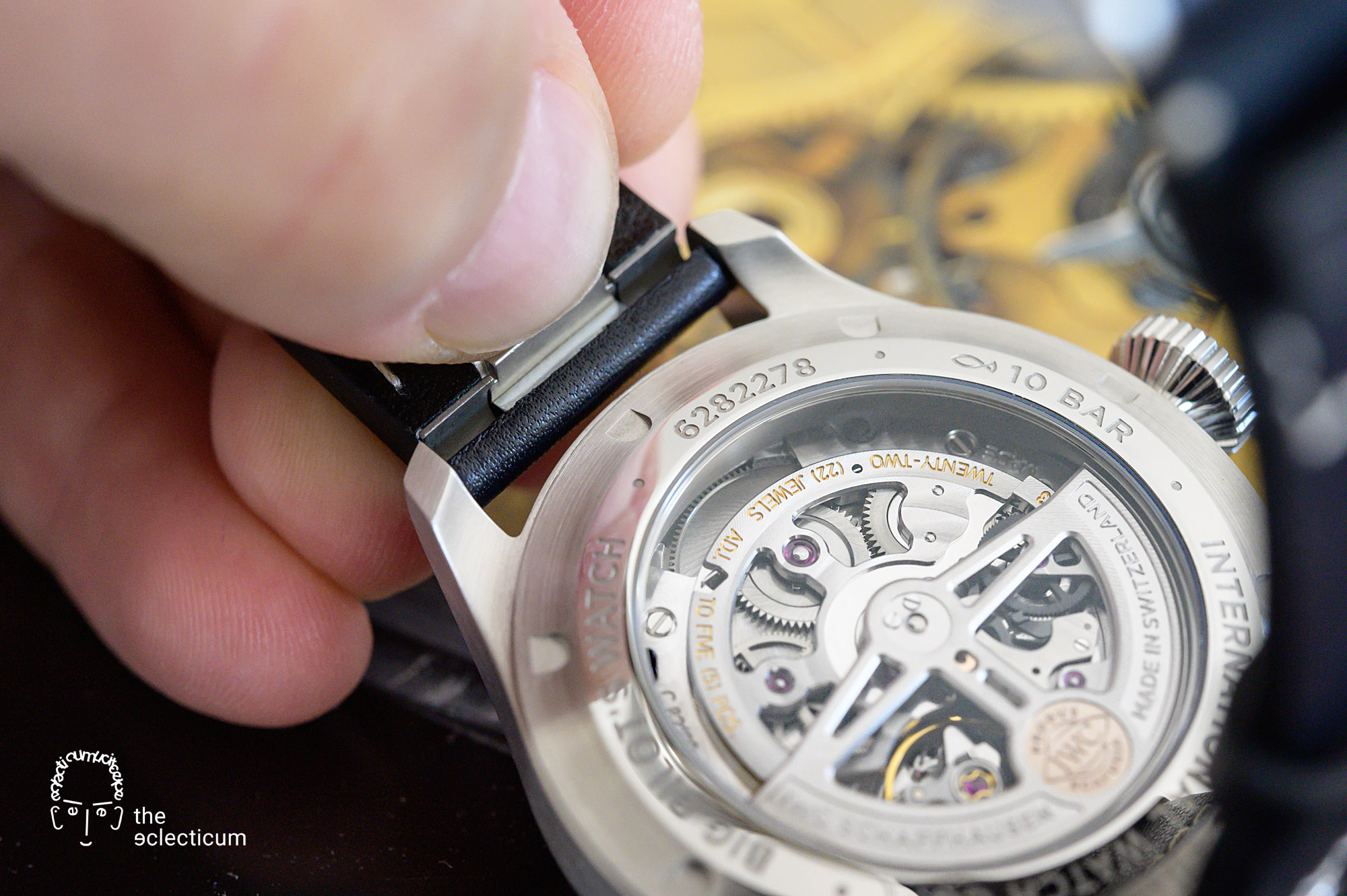 Since the system is identical to the one found on the Pilot’s Chronograph 41, I won’t waste any words here and simply direct to that article.

(IWC Big Pilot’s Watch 43 on calf (left) and rubber straps (middle) as well as on the steel bracelet (right)) For this review, I focused on the leather strap which indeed is the most true-to-original option. It’s a tough, solid strap, and it comes on IWC’s deployant clasp: 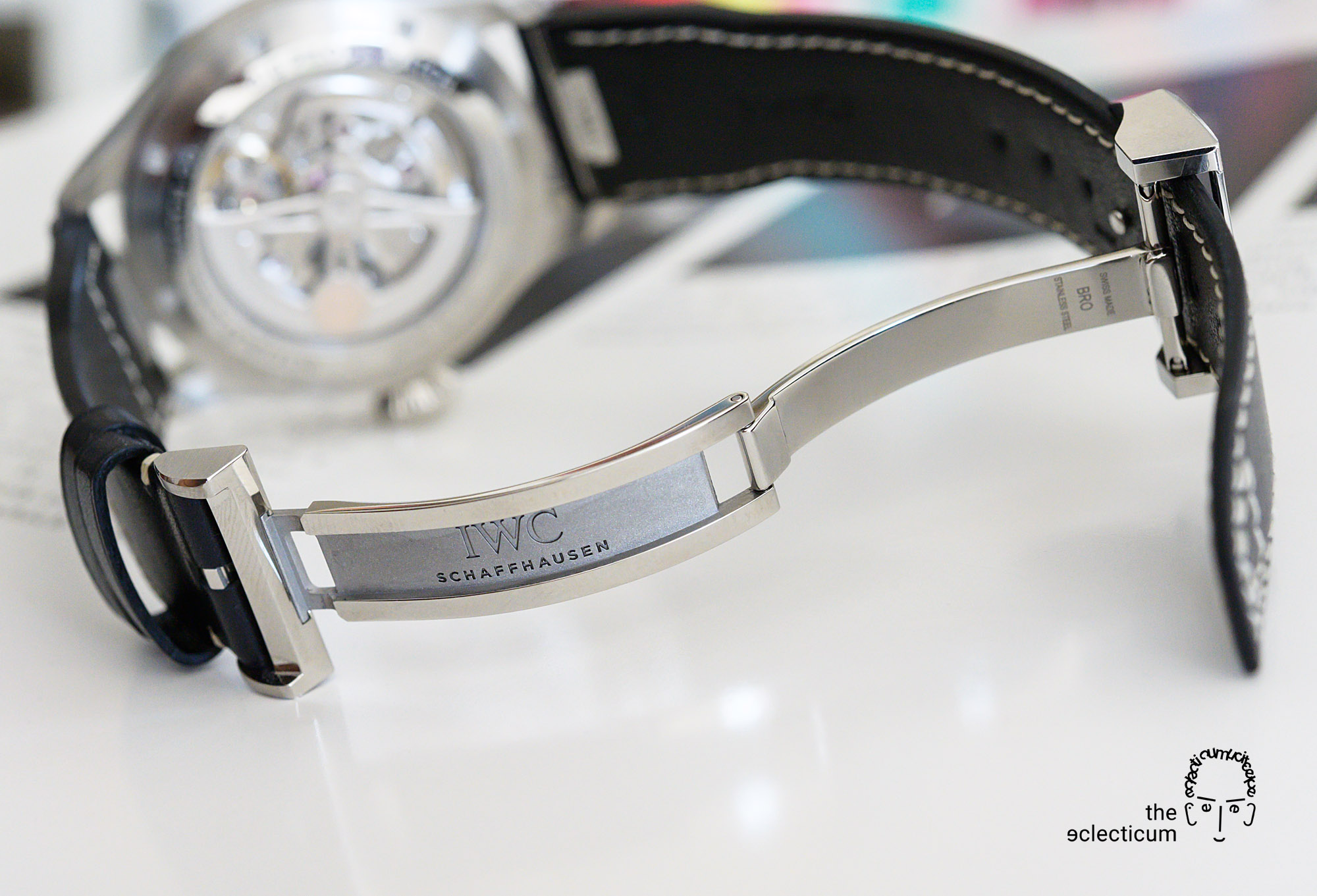 As much as IWC paid attention to wearing comfort, with this clasp, at least on my 18cm wrist, they didn’t do themselves a favour. Its robust and confidence inspiring, but as much as I tried, I failed to find a pleasant position on my wrist as it would always press against either radius or ulna. It could be simply my wrist, though.

That aside, the watch has presence and authority on the wrist, while ignoring the clasp it sits well (better still with the bracelet as that balances the otherwise slight top-heaviness), it conveys a sense of adventure, but also whispers a credible ‘I won’t fail you’ reassurance. 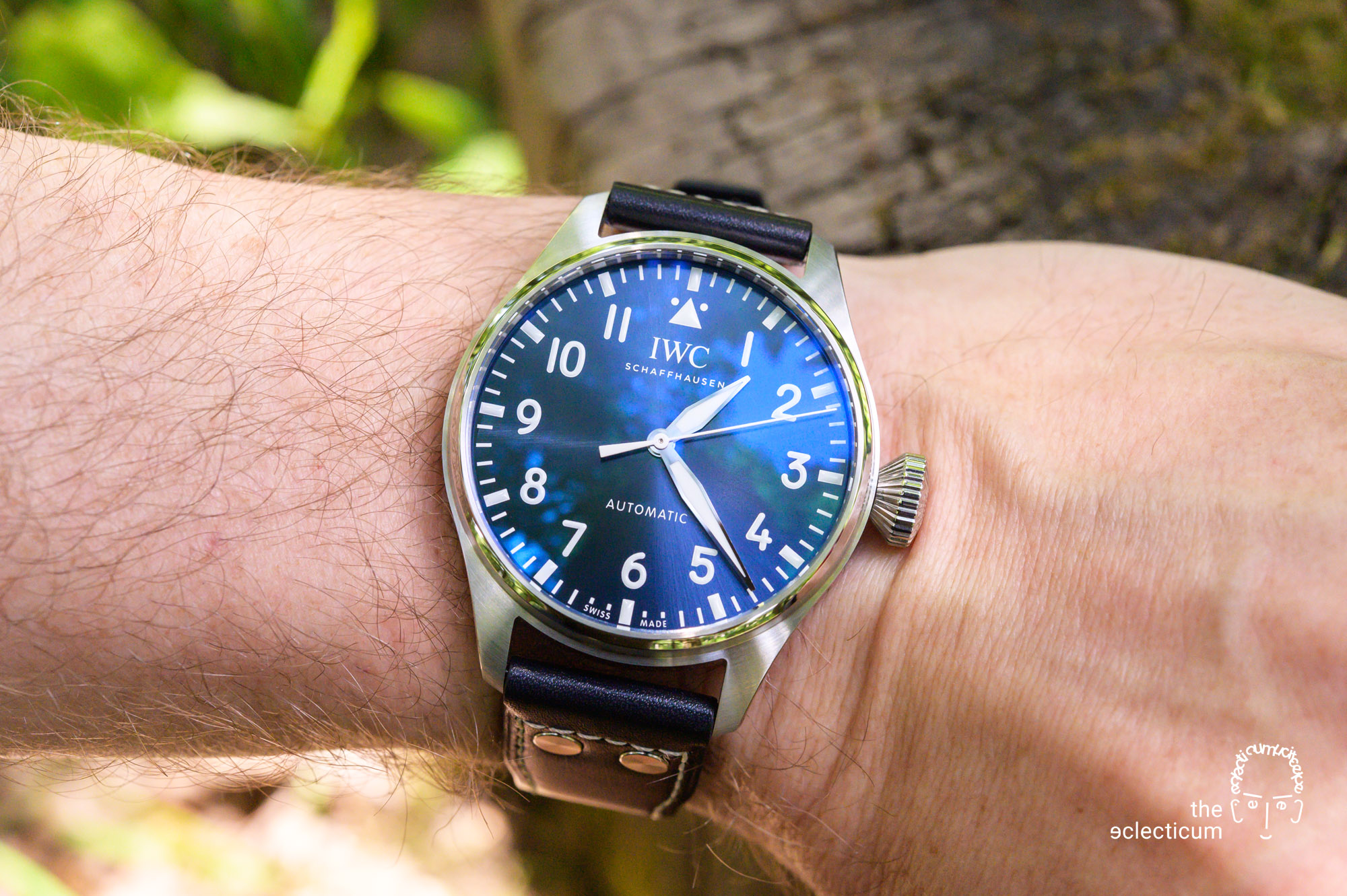 With 43mm, the case certainly matches a lot better to smaller wrists, thus making the watch even more attractive to, say, collectors in Asia, or even ladies. Women for various reasons at times favour quite masculine pieces, and with its comparatively restrained diameter the new IWC will certainly be considered ‘prey’: 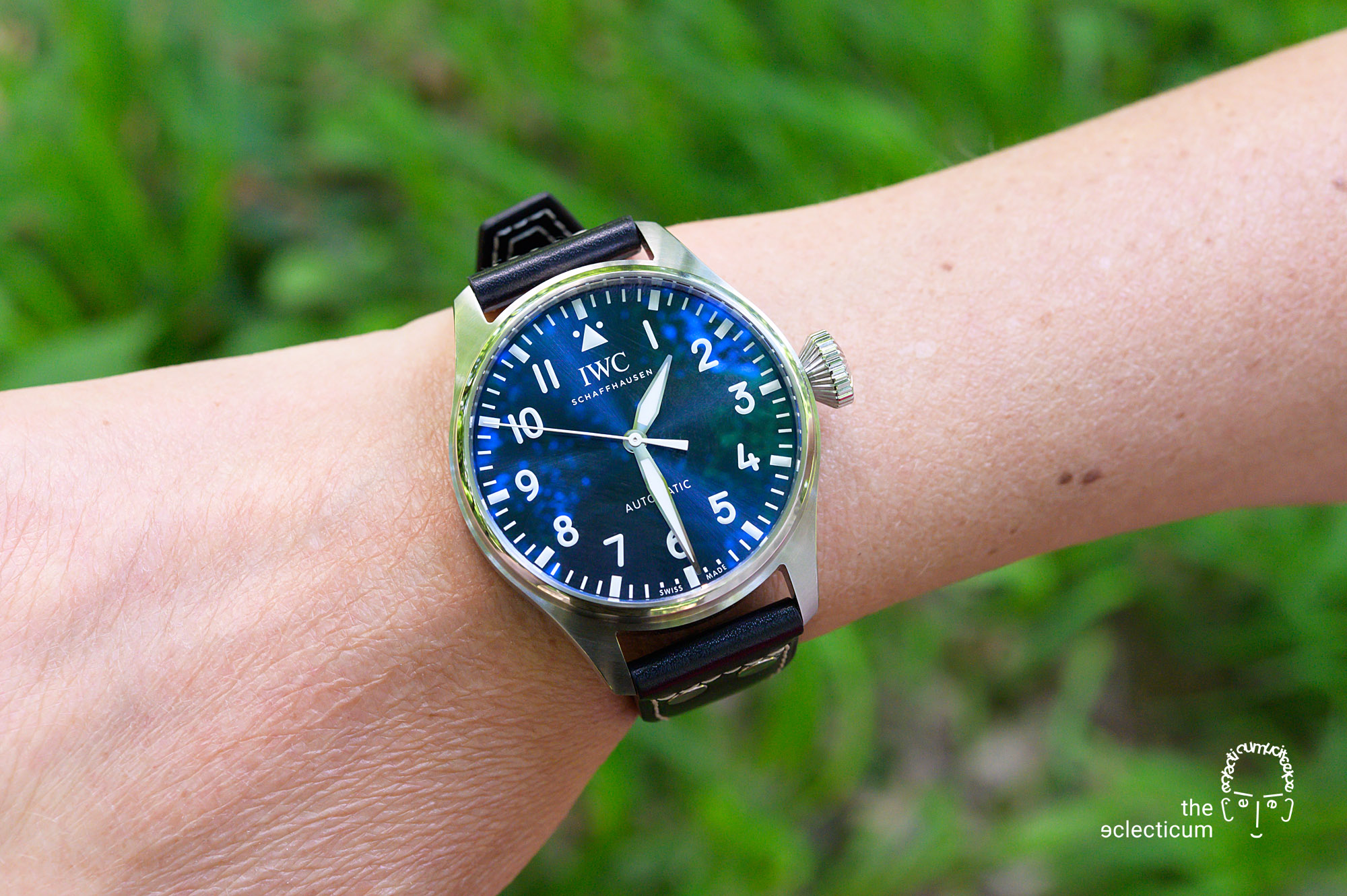 To wrap up, here’s our video summarising our impressions:

We think about the new IWC Big Pilot’s Watch 43 as coincidentally the most ‘puristic’ interpretation of IWC’s aviation legacy as well as the most wearable one (as far as in-house movements are concerned), thus the one with the broadest appeal. If I had a whish though it would be to make the piece even more a ‘PuristS’ choice’ than it already is, with a few simple means… a deep, matte black dial, and heat-blued hands framing the luminous filling. 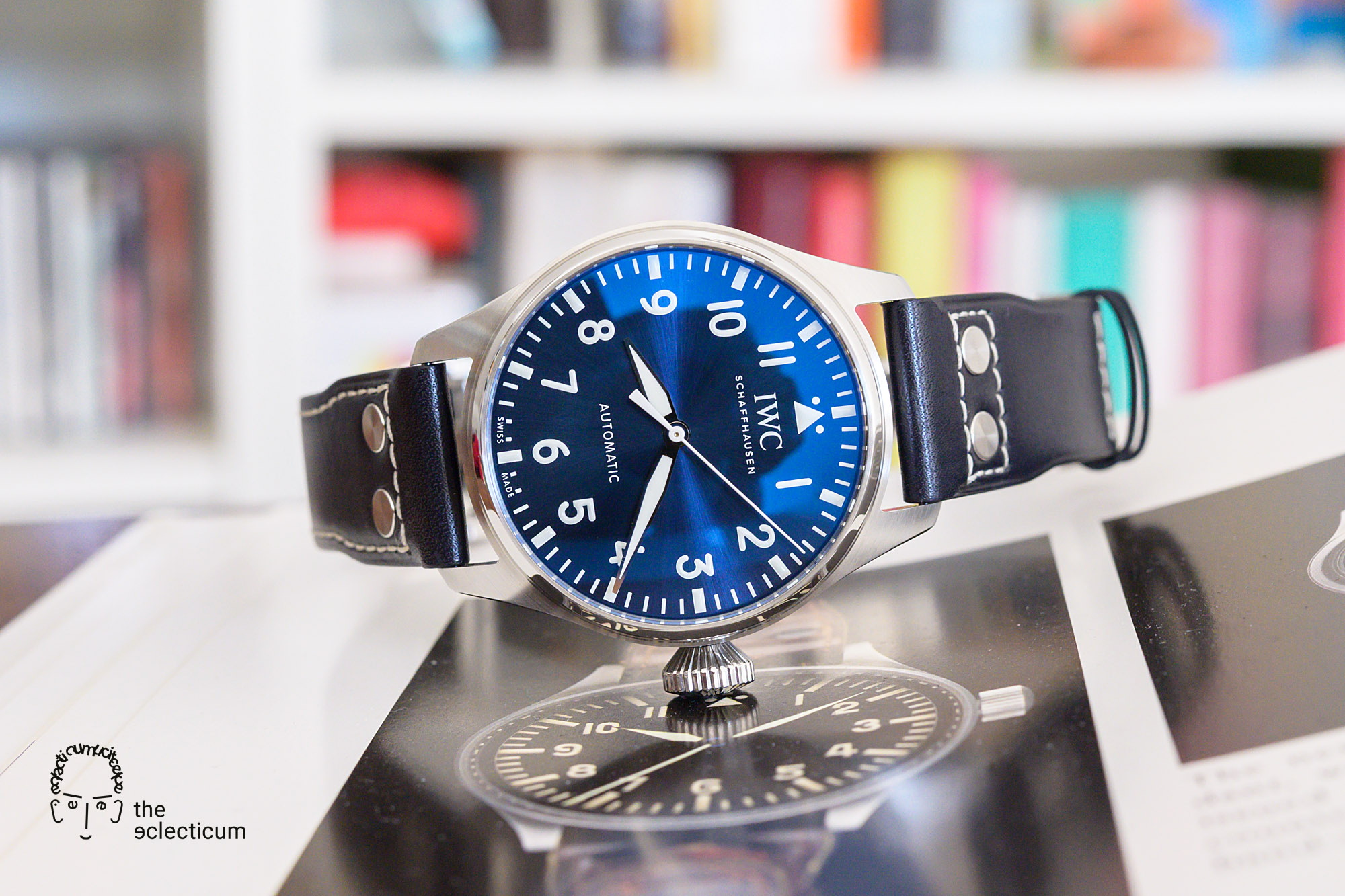 (IWC’s new Big Pilot’s Watch 43, placed on the landmark book ’Grande Complication’ by Manfred Fritz, on p. 38 showing the Ref. IW436 military observation watch) You may keep everything else the same (save the clasp ;-))…

Vegan Deluxe? Hands-on with the new Hirsch WINE strap made of Austrian wine...

Snapshots of the Chronomaster Original – the iconic Zenith A386 gets a...
Scroll to top