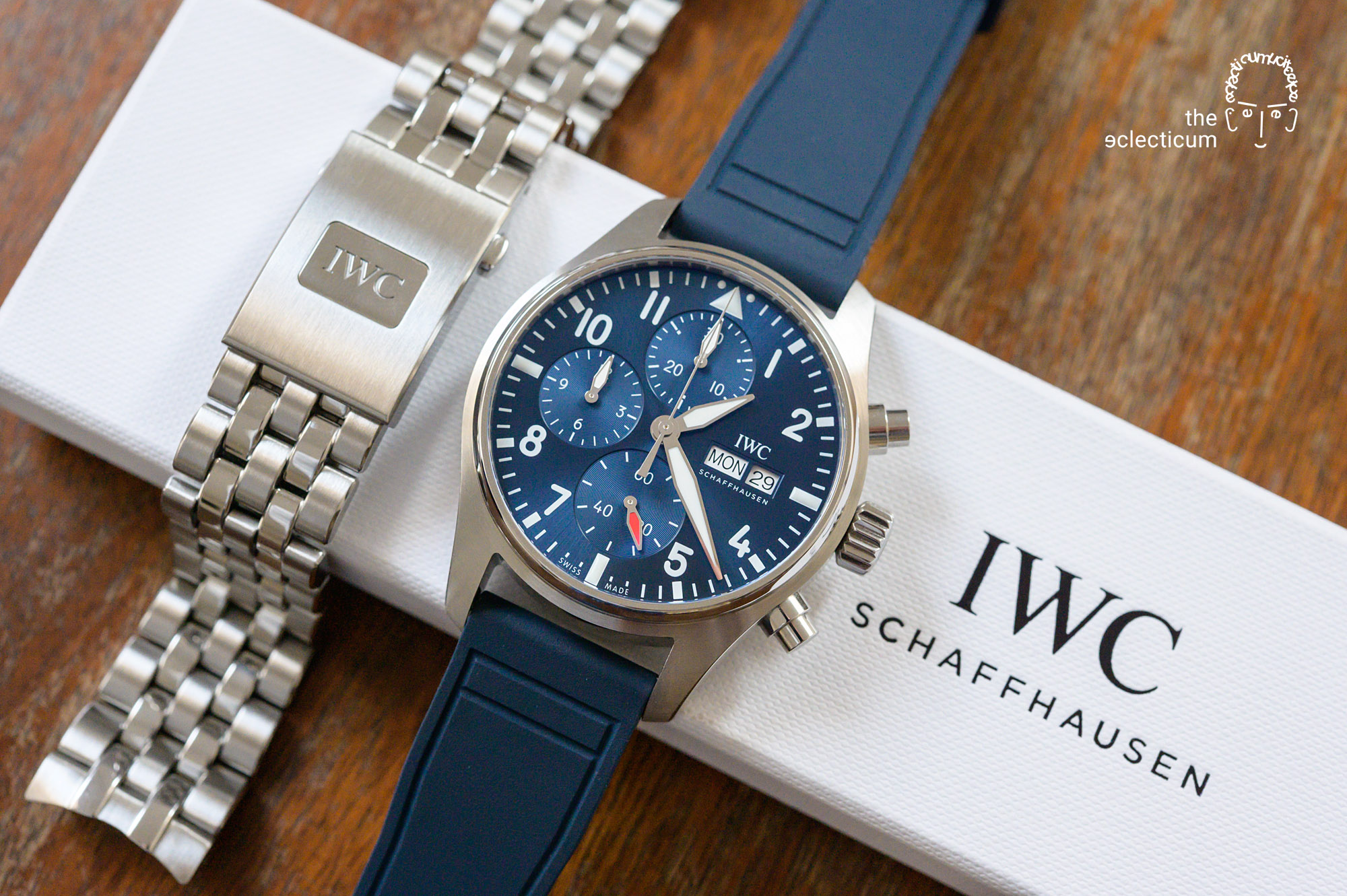 In the collection of IWC since 1988, the essential Pilot’s Chronograph embodied the firm’s no-nonsense approach like no other watch: clear and readable design with no frills, solid construction and a movement which had only two main features, but the important ones: reliability and robustness. The watch retained a staple position in the company’s portfolio over the years. Today, IWC presents the newest iteration, the IWC Pilot’s Chronograph 41mm (Ref. IW3881) which comes with a handful of unexpected, thoroughly devised upgrades:

Normally, a refresher upgrade to an existing watch would not warrant a dedicated article here on the eclecticum, but when I got a watch to wear over the weekend, it soon became clear that IWC spent some serious thoughts on how to refine a few details which in summary improve the watch quite a bit, and the changes are aplenty and concern numerous features of a watch. Therefore, the story here tells a bit about the wider context of watchmaking.

Less is more: a downsized case, and a (formerly) special dial

Brushed blue and green, these are the two colours IWC proposes for the watch. Green is the colour of the season, one might think, and blue a classic – but not necessarily for IWC, who used brushed blue dials in the Pilot’s watch series predominantly for their ‘Le Petit Prince’ special editions. The choice appears a bit odd for a technical watch like the Pilot, and quite honestly, I am not the biggest fan (more on that later). 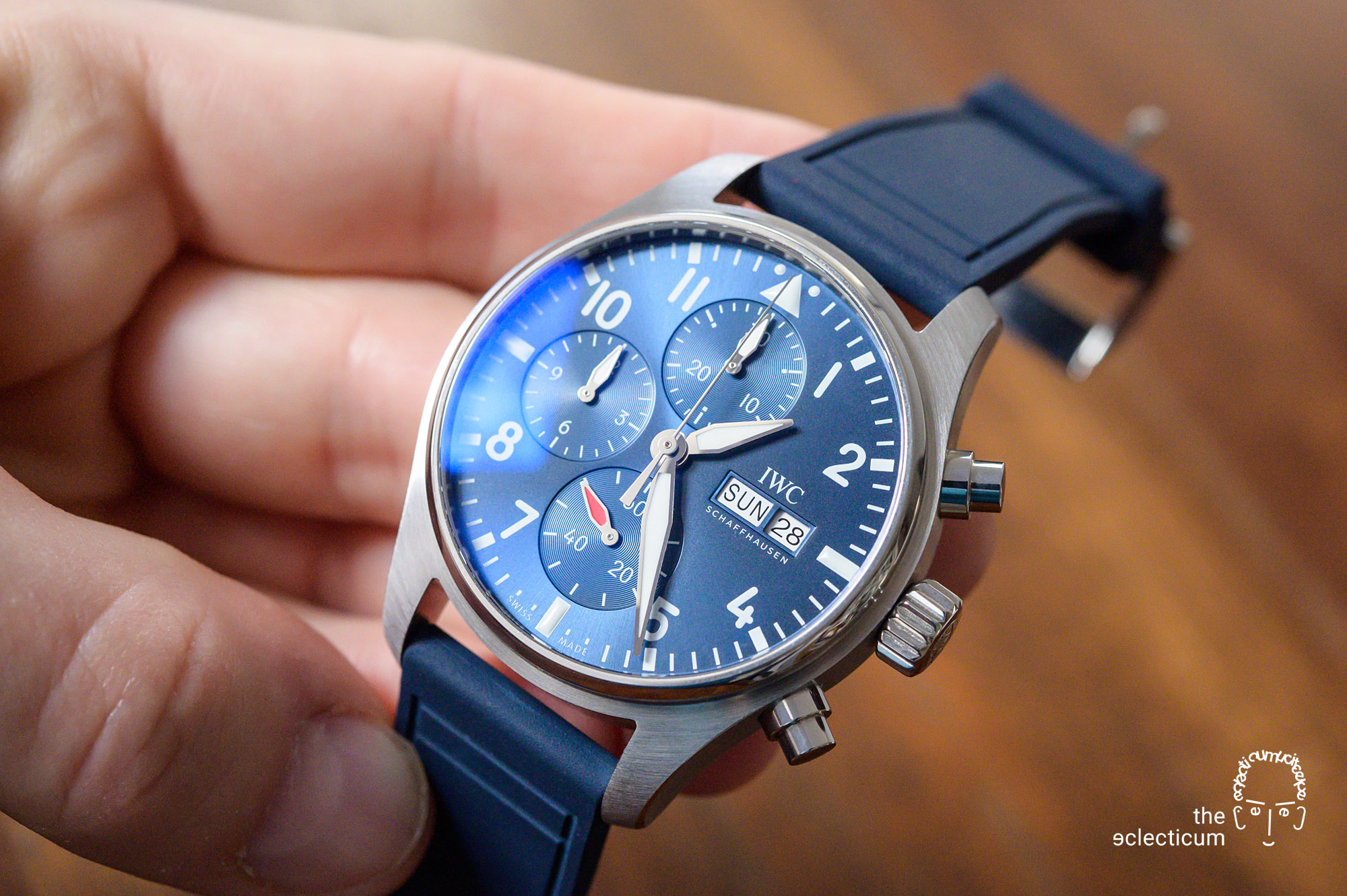 (IWC’s Pilot Chronographs: Ref. 3777 Le Petit Prince (left, 43mm) and Ref. 3881 (right, 41mm)) When one looks at the new chronograph and compares it to its predecessor one by one, the difference is not immediately recognisable: 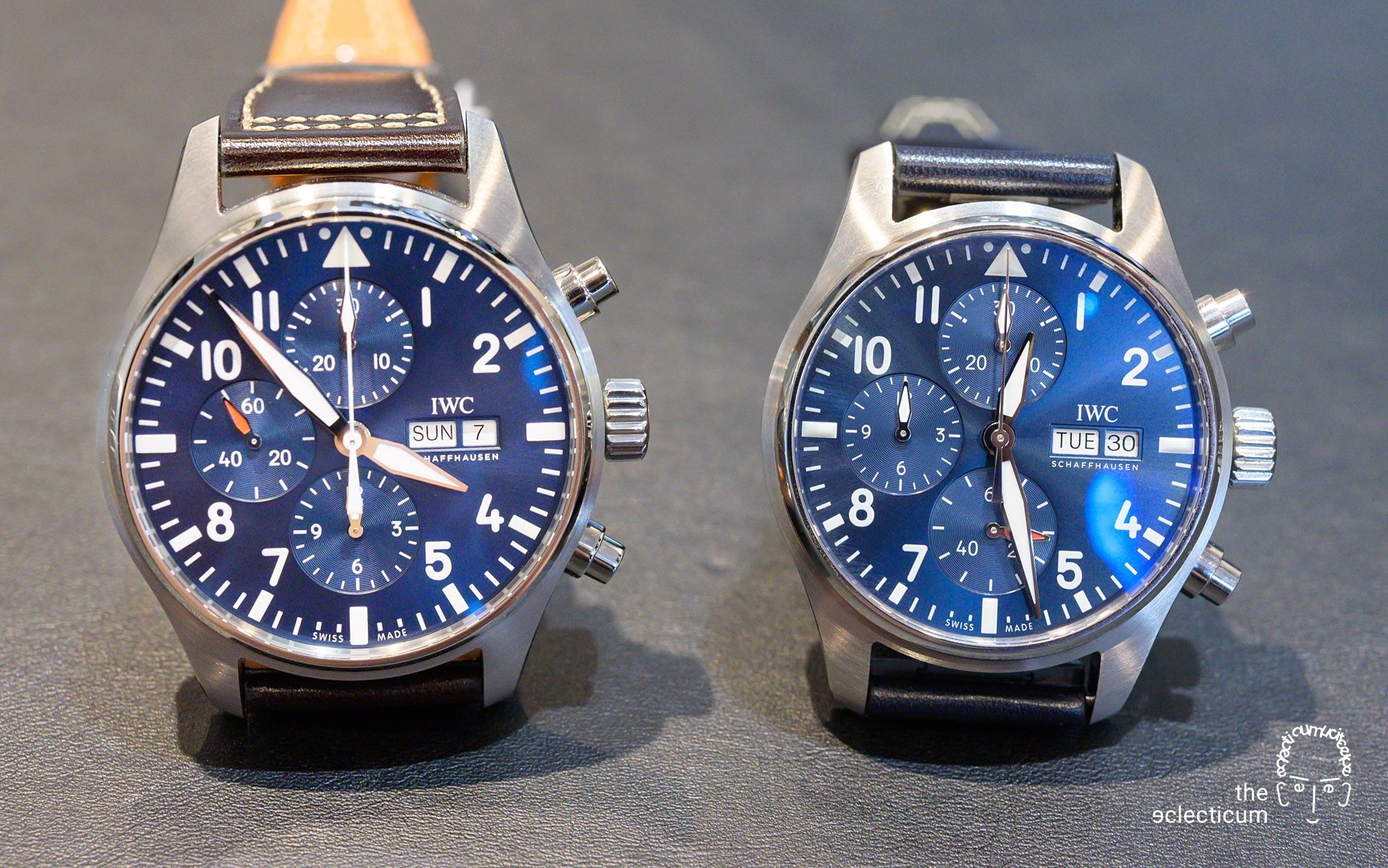 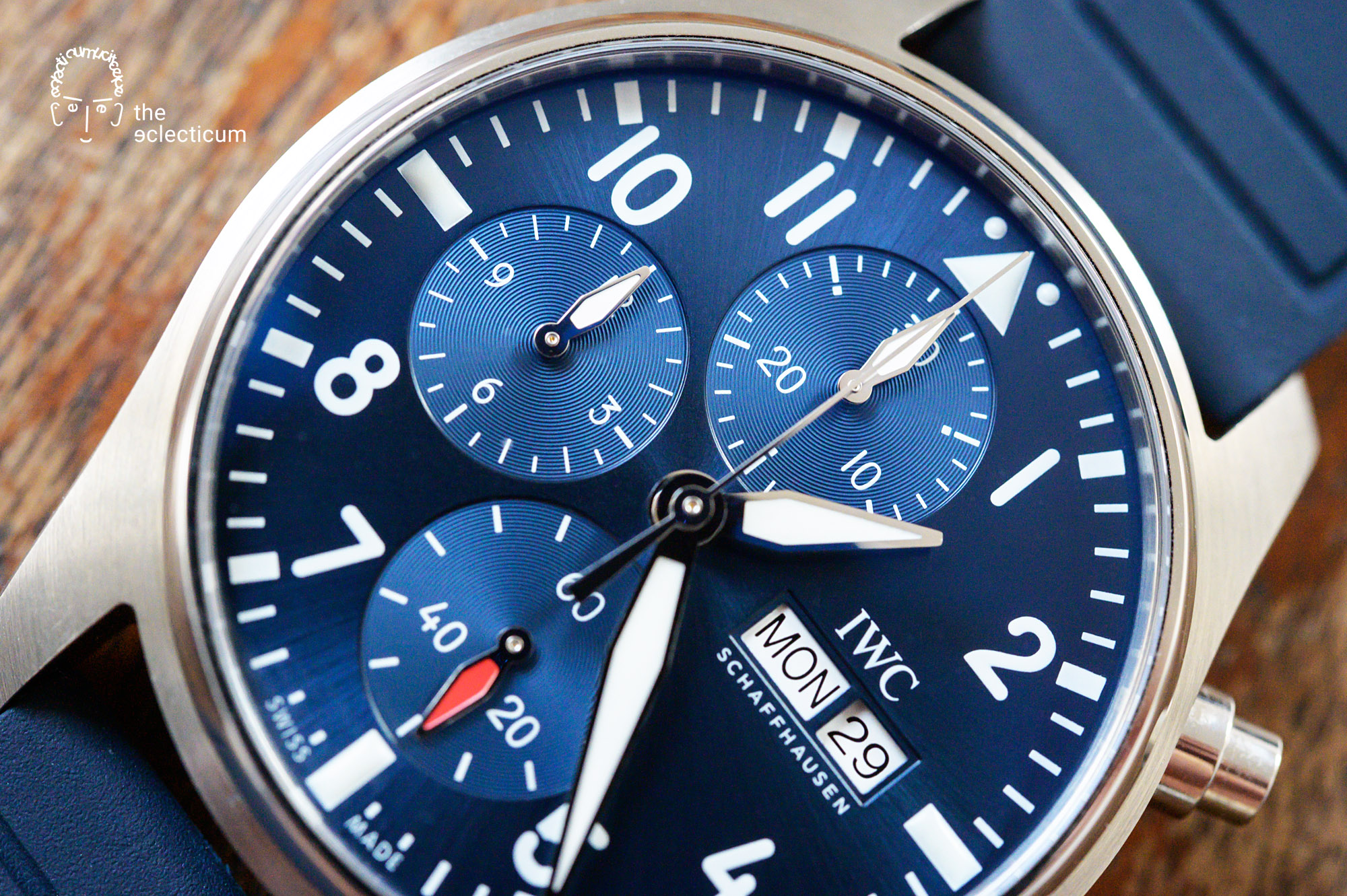 Both have otherwise identical, very well-crafted dial finishes with a sunray brushed dial area and concentric rings on the three subdials. Both also have the bold propeller shaped hands (it’s an aviator’s watch, after all) that first appeared with the ‘Spitfire’ versions in 2000, a design which aids the legibility, although I would like to see a more defined execution. 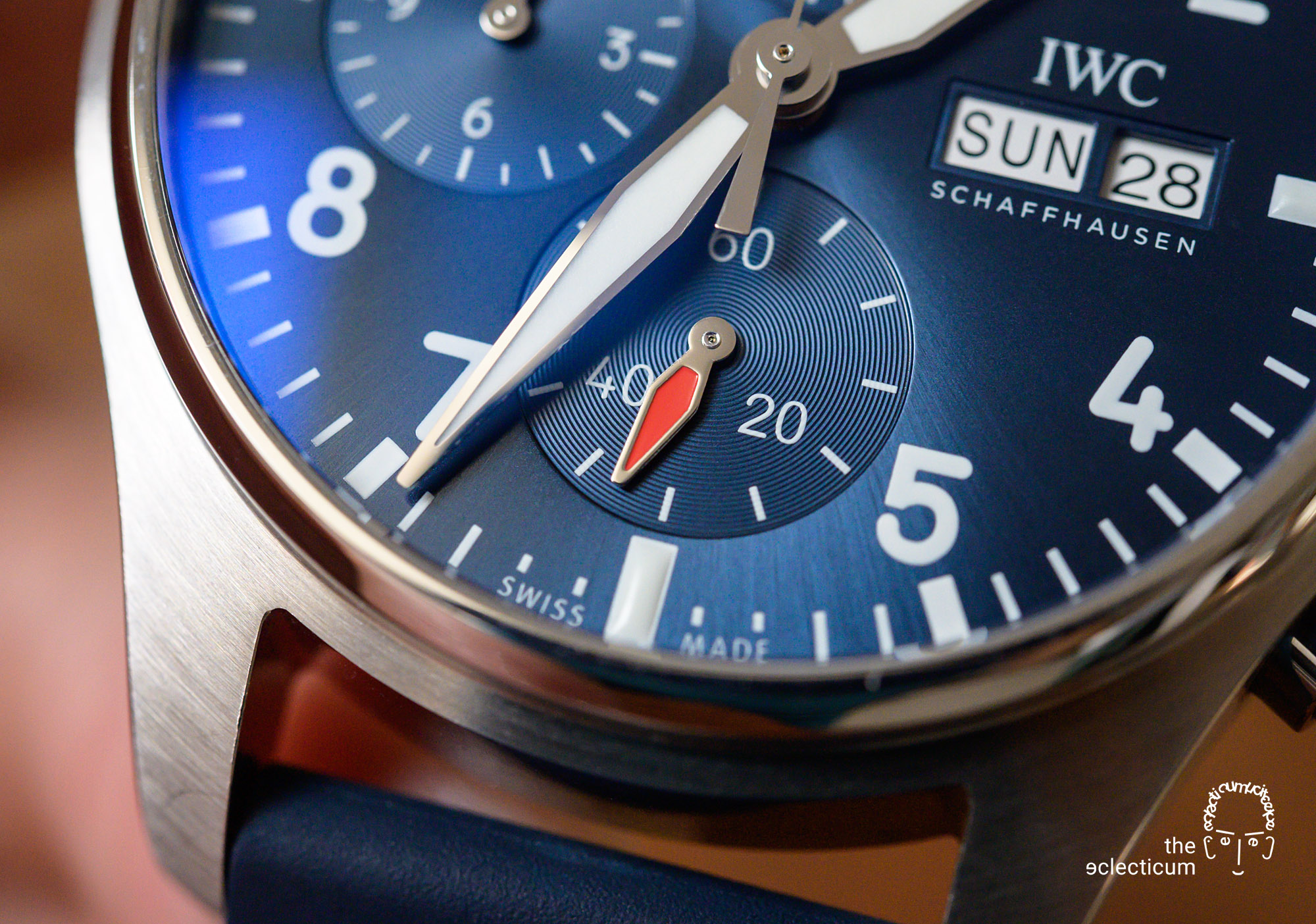 The overall dial is pretty straightforward, but I feel the sunray finishing somehow exposes the flatness more than a technical, black pilot watch dial would do: 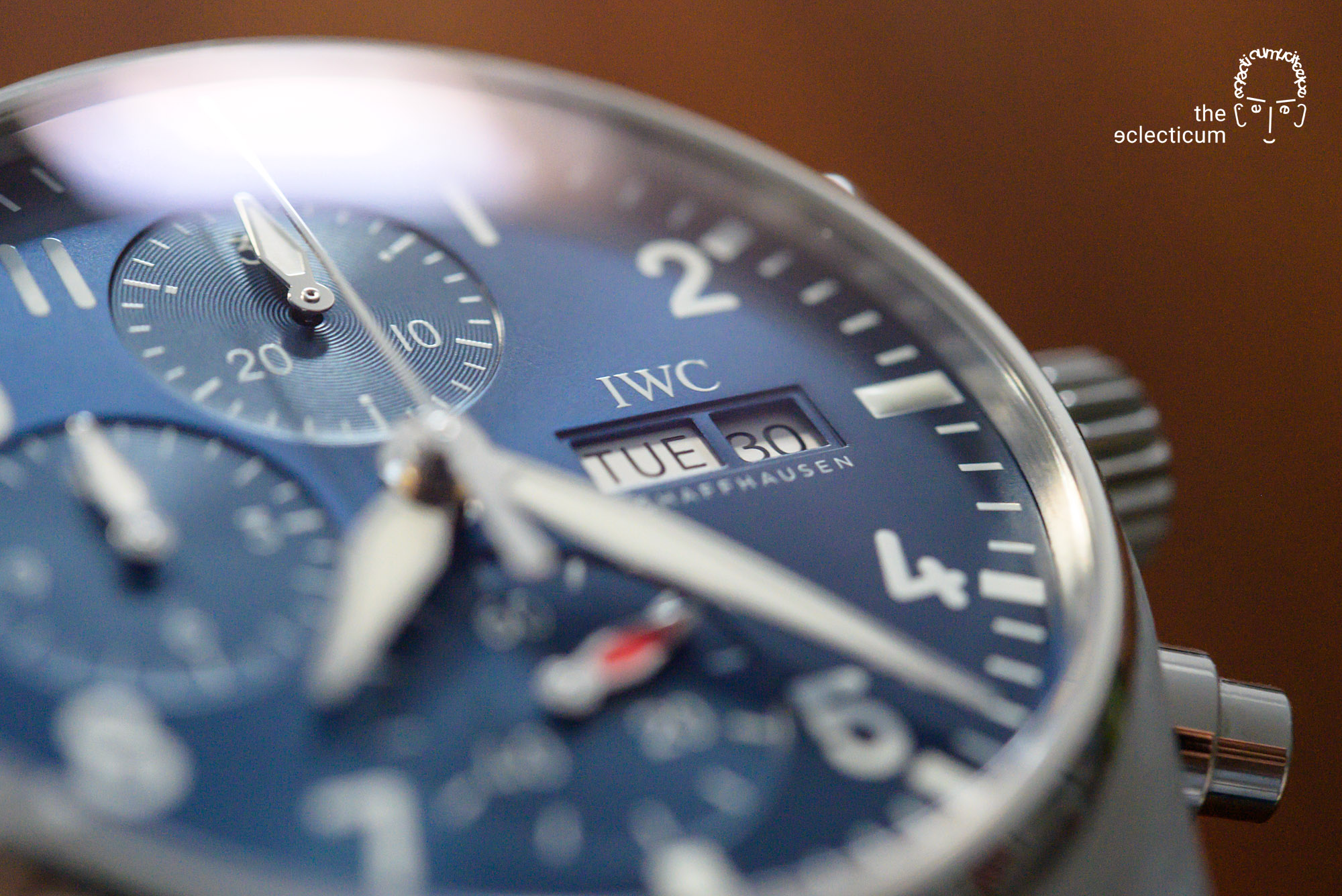 Finally, IWC added strong lume but only to the essentials – the time indication – a perfect choice underlining the ‘toolness’ of the watch: 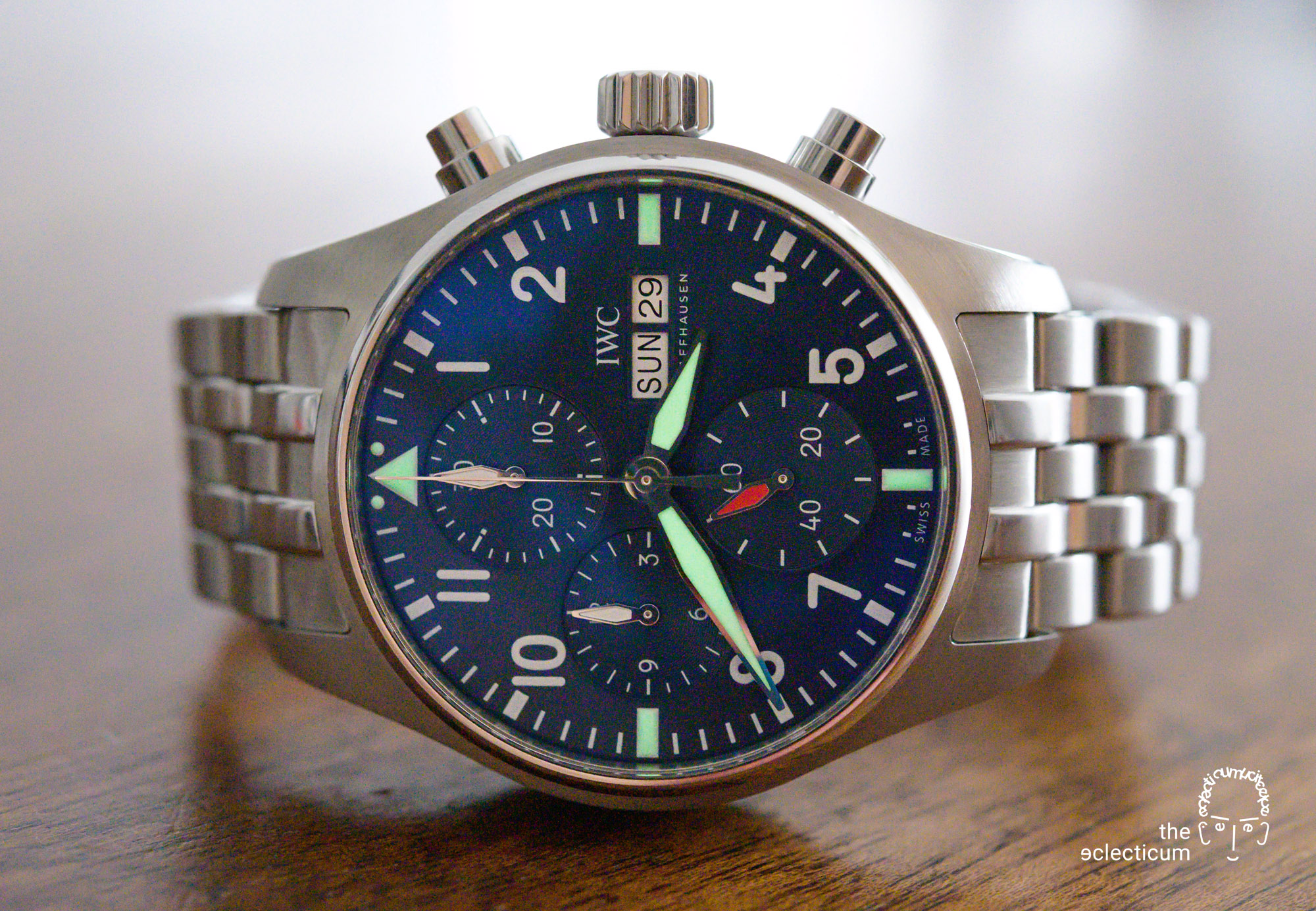 I’d like to stay a little bit on the case: like the dial, the case has robust and simple lines, and a wonderfully executed brushed finishing with a few polished accents. Just note how finely the edges of the lugs are polished: 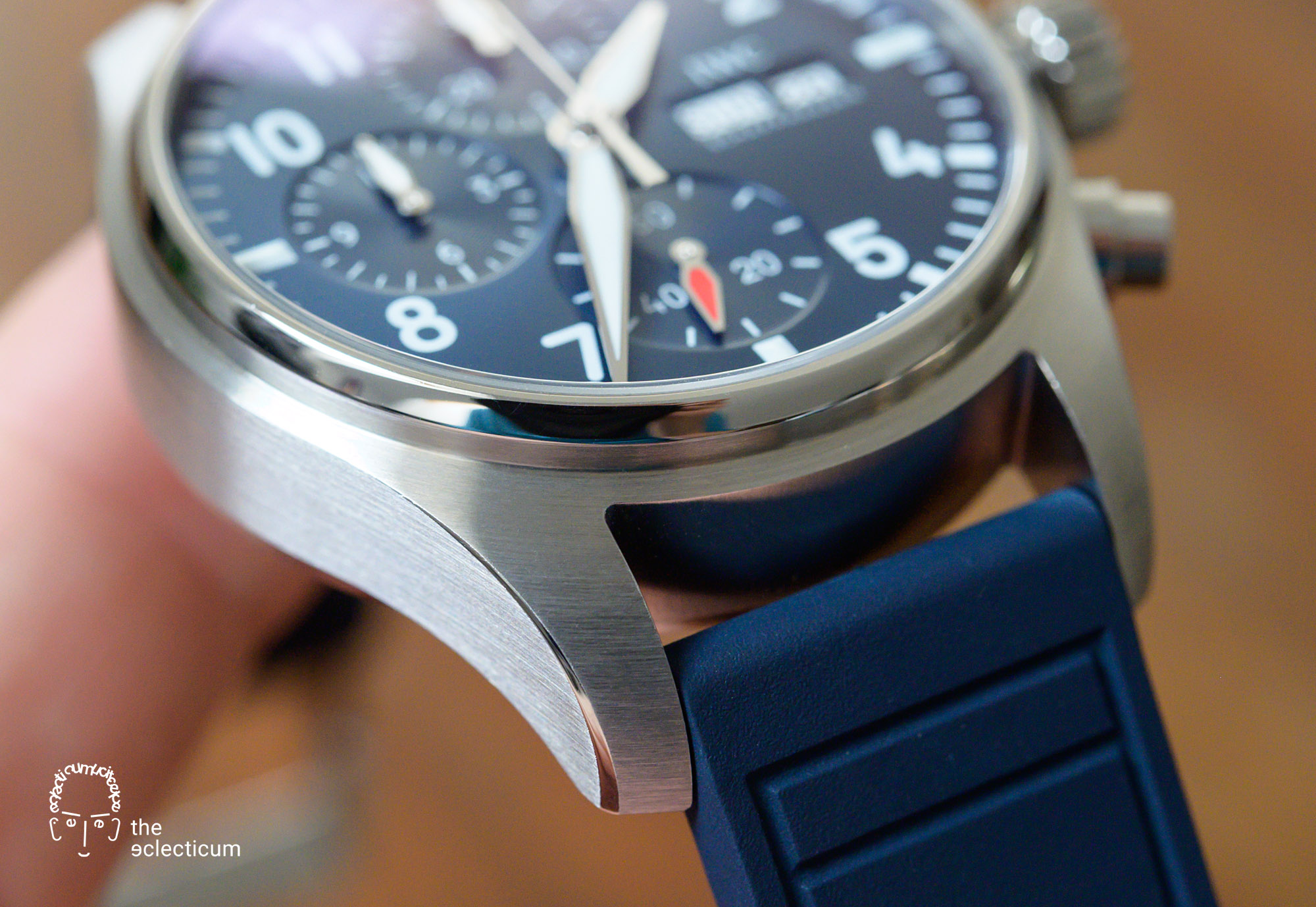 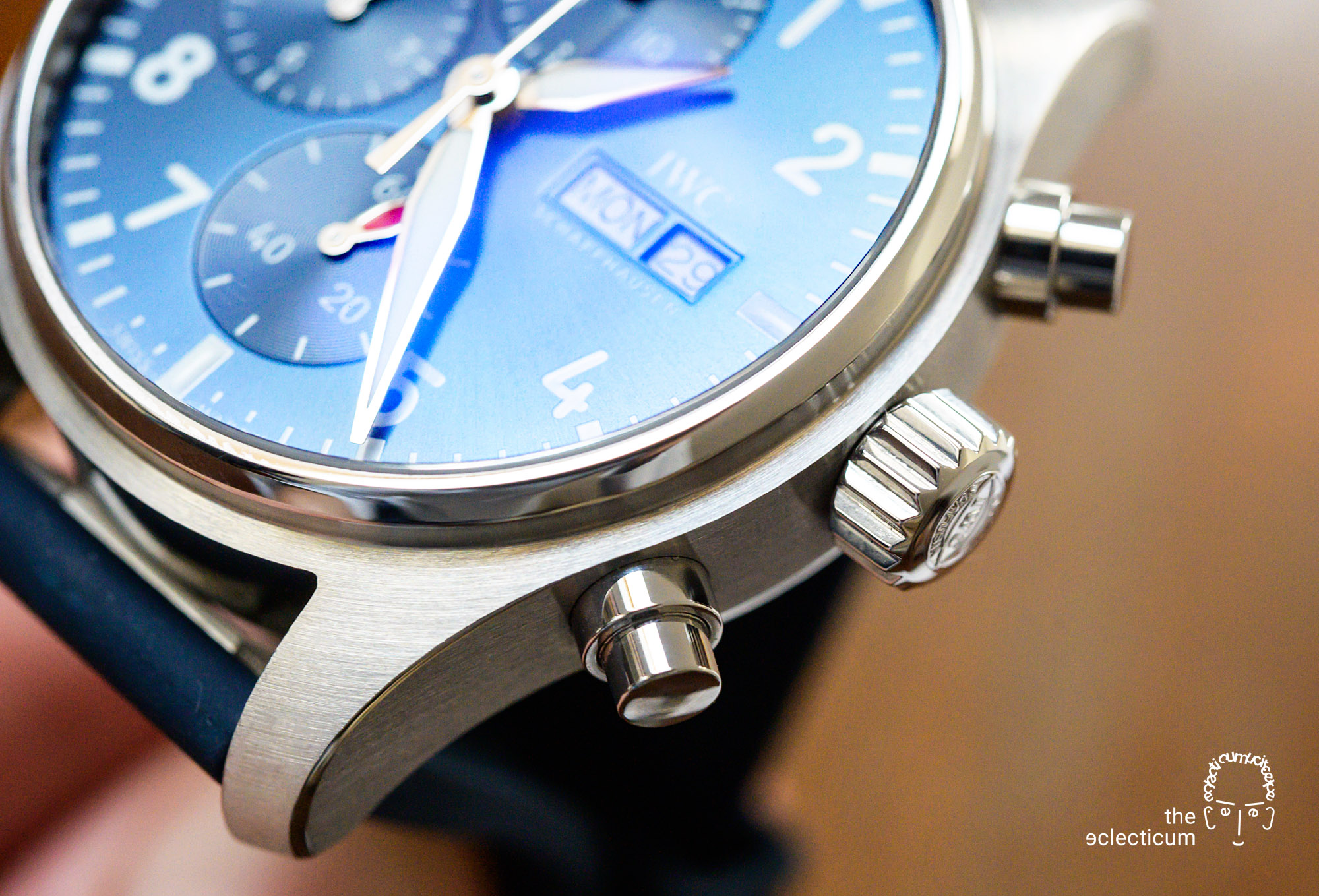 At this stage I think praise is due for the feel of the pushers: they are perfectly guided and move smoothly up to activation point, and a saturated, well-damped click executes the desired function, and even the sound is accordingly deep (please view the video below). Pusher-feel is a function of the movement, obviously, but also case construction, with elements such as pusher shape, guidance, internal redirection and other factors contributing. In IWC’s case, even their cam/lever-controlled predecessor Ref. 3777 has a well-defined pusher feel, but the new Pilot here is sensibly better. This shows me that IWC does care and actively addresses this front-facing element of user interface (not all manufactures do so, even at higher price points!), and that the new column wheel movement can adequately improve. Very well done, I did not expect this at this price point!

A side view reveals that despite a slight reduction in thickness the case is still substantial, but in my book that’s ok for a tool watch (and it offers a lot of real estate for the fine brushing!): 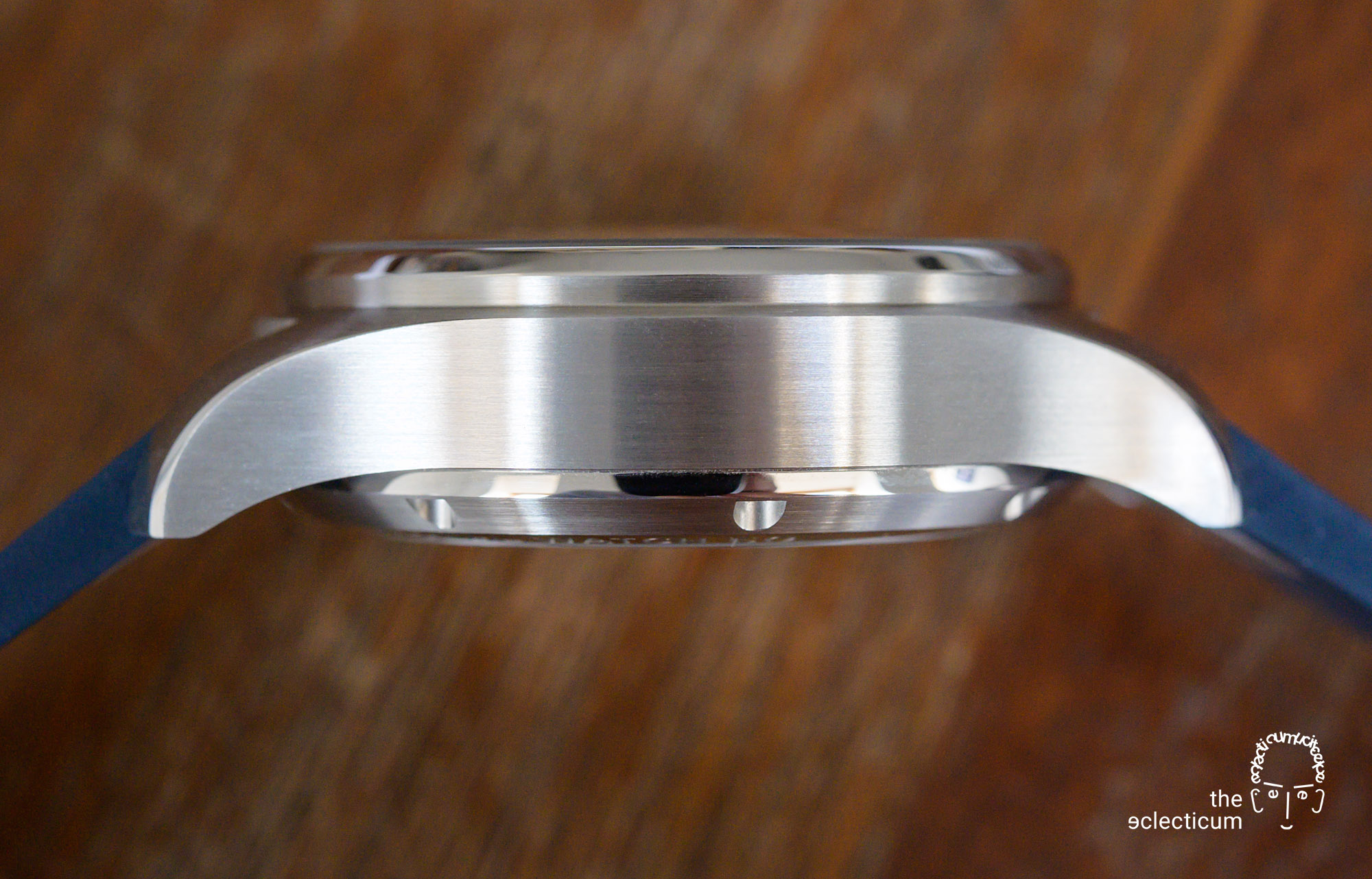 I inquired with IWC why the watch could be thinner than the hitherto existing one, and the reason is that the new Ref. 3881 does not come with a soft-iron inner case. Thus, the caseback is thinner, and like with the new (for example) OMEGA Speedmaster, now has a two-level bezel: 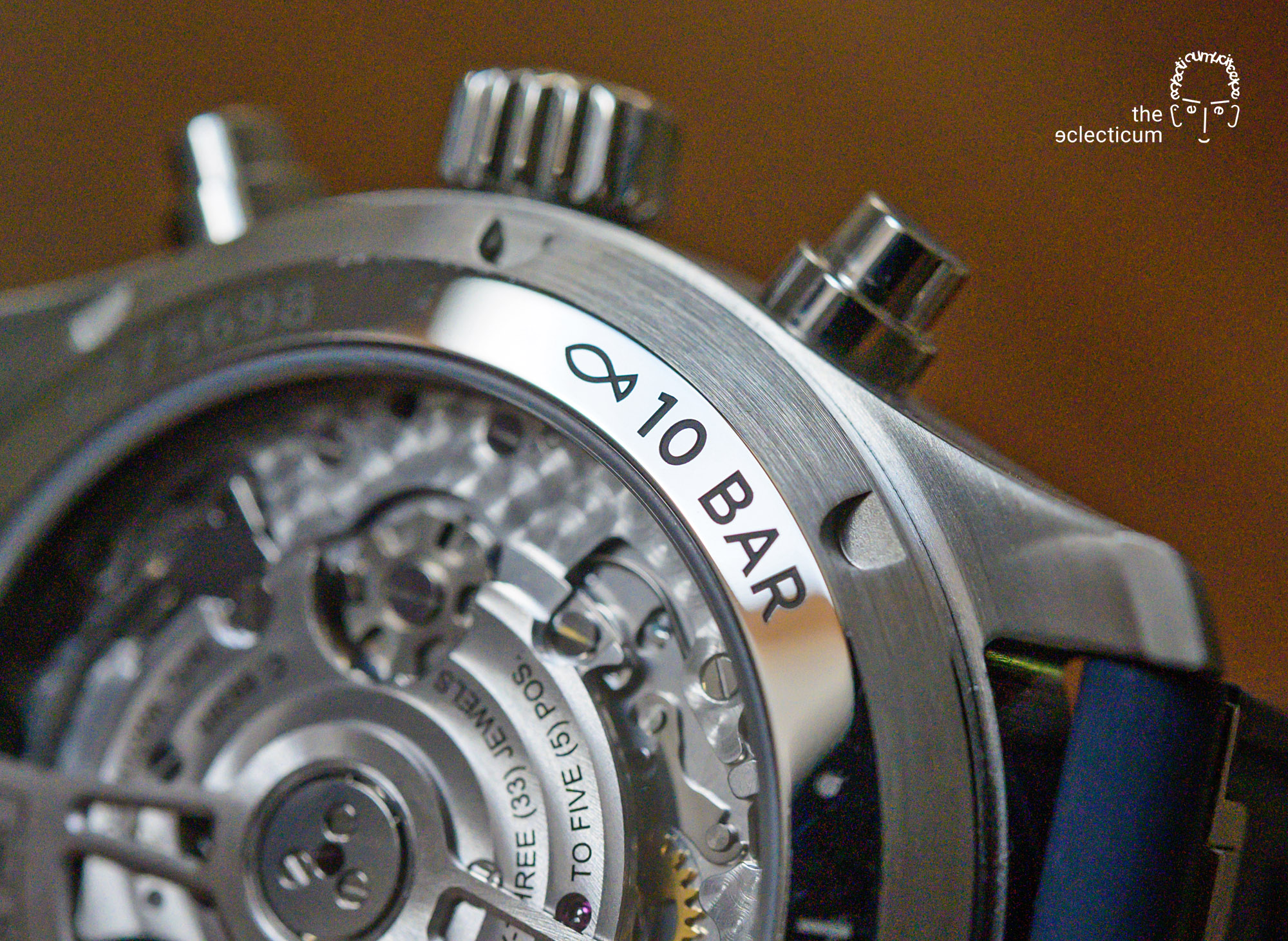 Yes, and the most obvious change is now the addition of a display back – a logical move with the new in-house movement: 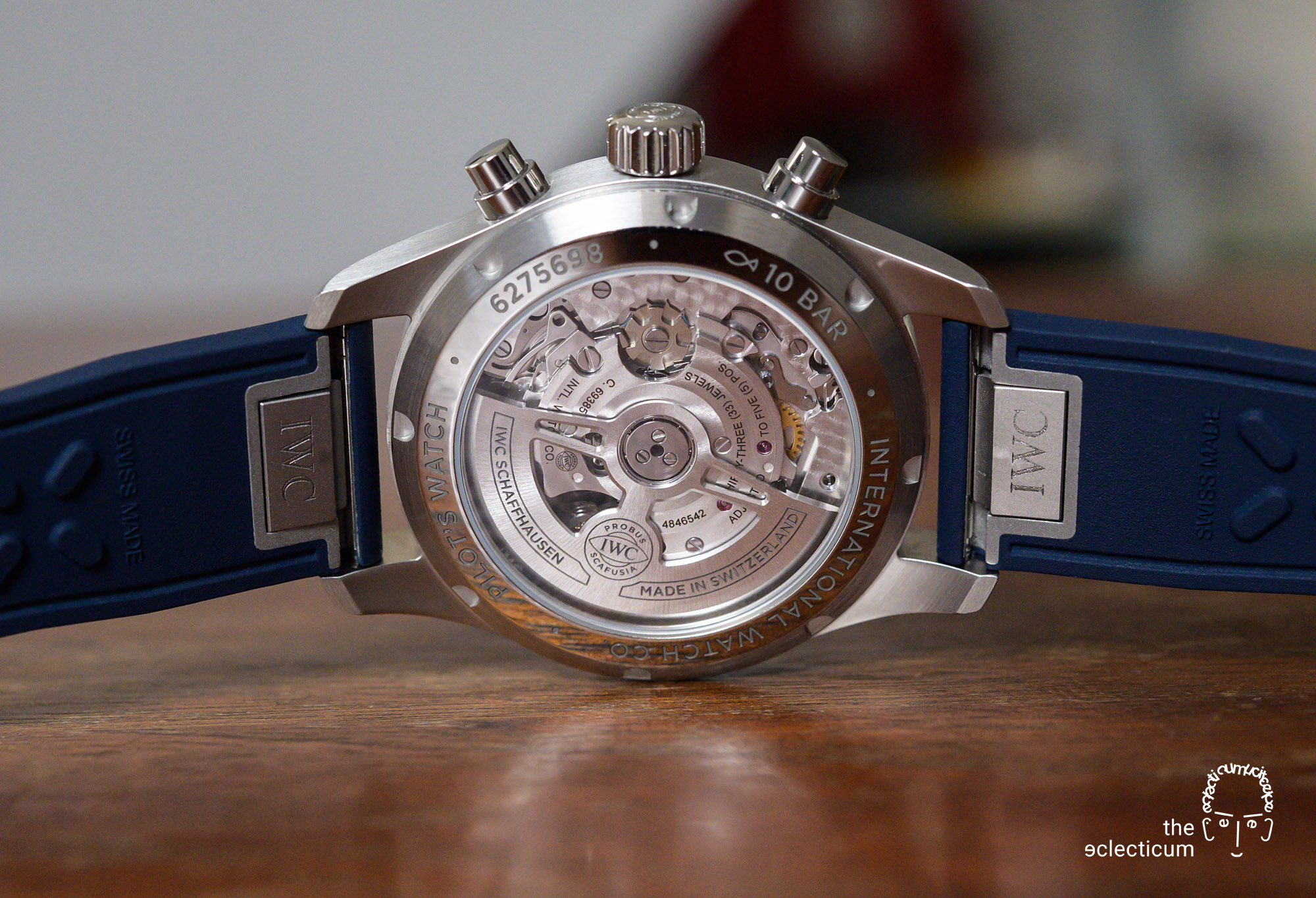 Overall, considered refinements to an already very-well rounded watch – nothing more, nothing less, and that’s a good thing!

IWC did a significant upgrade under the hood of the Pilot’s Chronograph, in that the brand replaced the venerable, robust but a bit ubiquitous Valjoux 7750 with their own Cal. 69385: 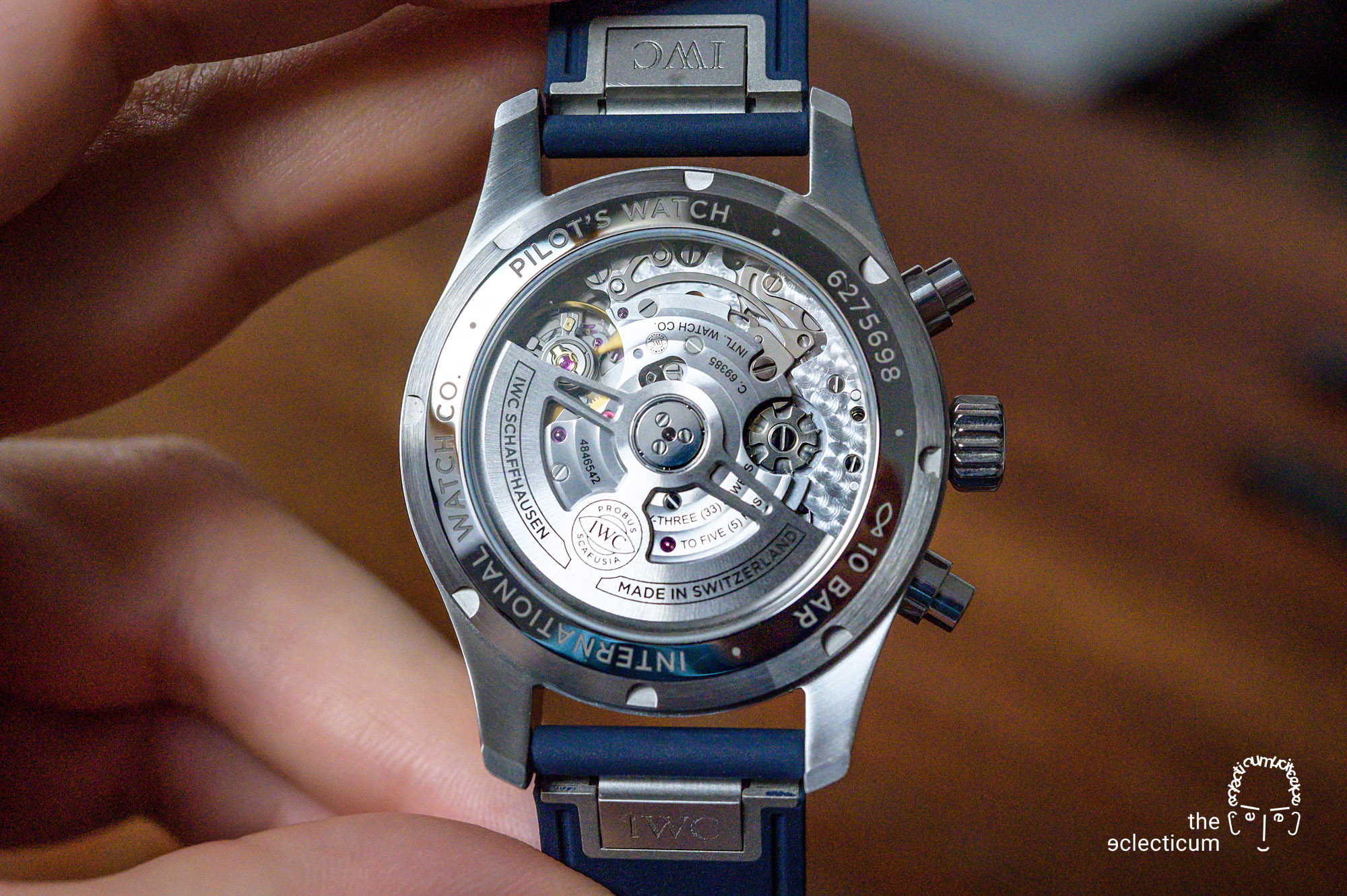 The movement is not exactly new to IWC, as a family it existed for some time and drove, for example, also the ‘Spitfire’ version of 2019. It is designed as a robust movement with column-wheel operated chronograph that engages and disengages by means of a pivoting pinion. It winds in both directions, another difference to the Valjoux. 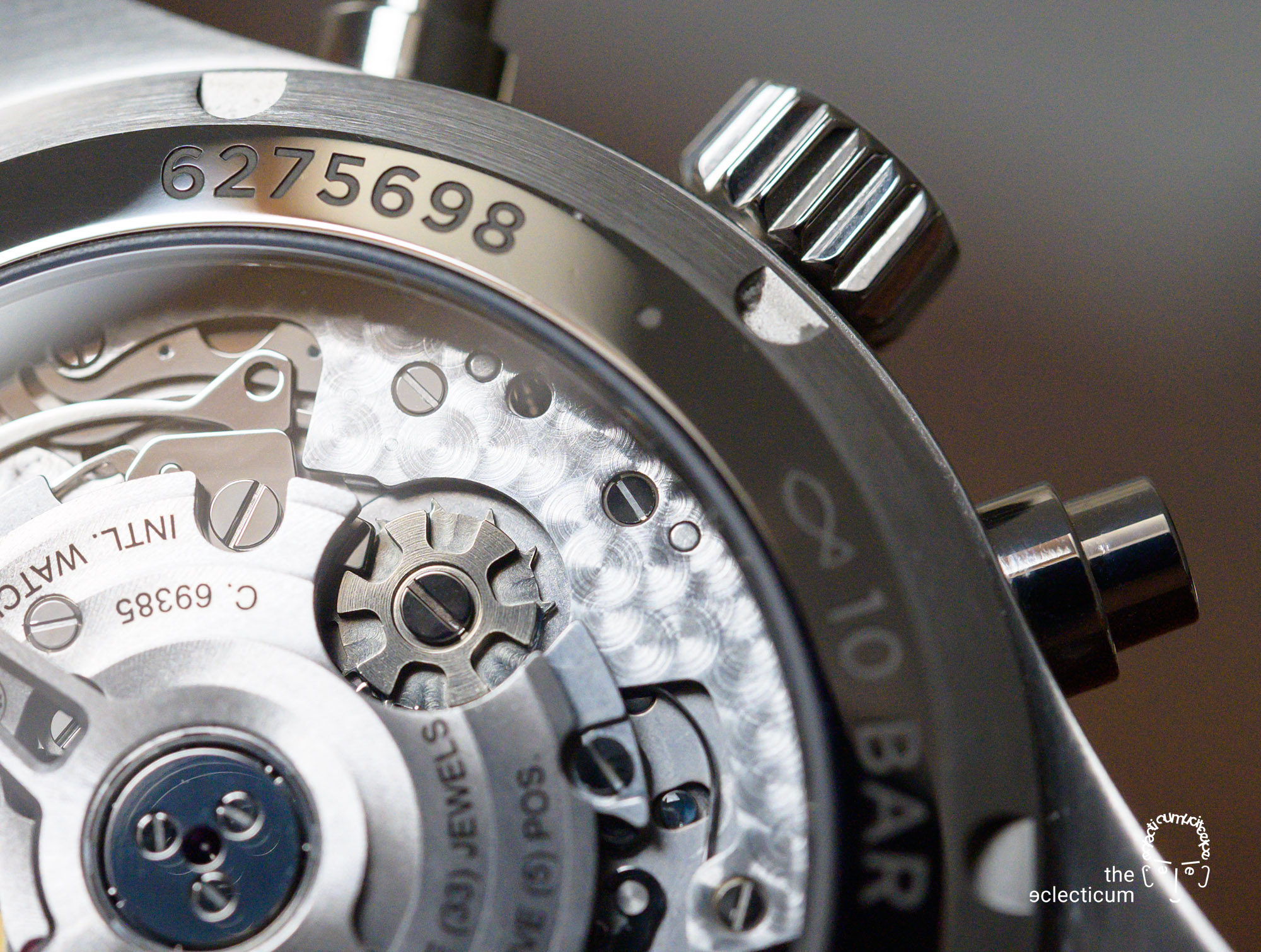 (Column wheel of the Cal. 69385) Other than that, it seems there is a lot in common with the Valjoux: the subdials are at the same positions, just the respective functions have changed place (see further above), the autonomy is 46h, the layout of the gears and levers and the position of the column wheel look similar to other column wheel modification to a Valjoux chronograph) and it even has a normal Etachron regulating system – thus I guess the Cal. 69385 and its siblings are designed as drop-in replacements. 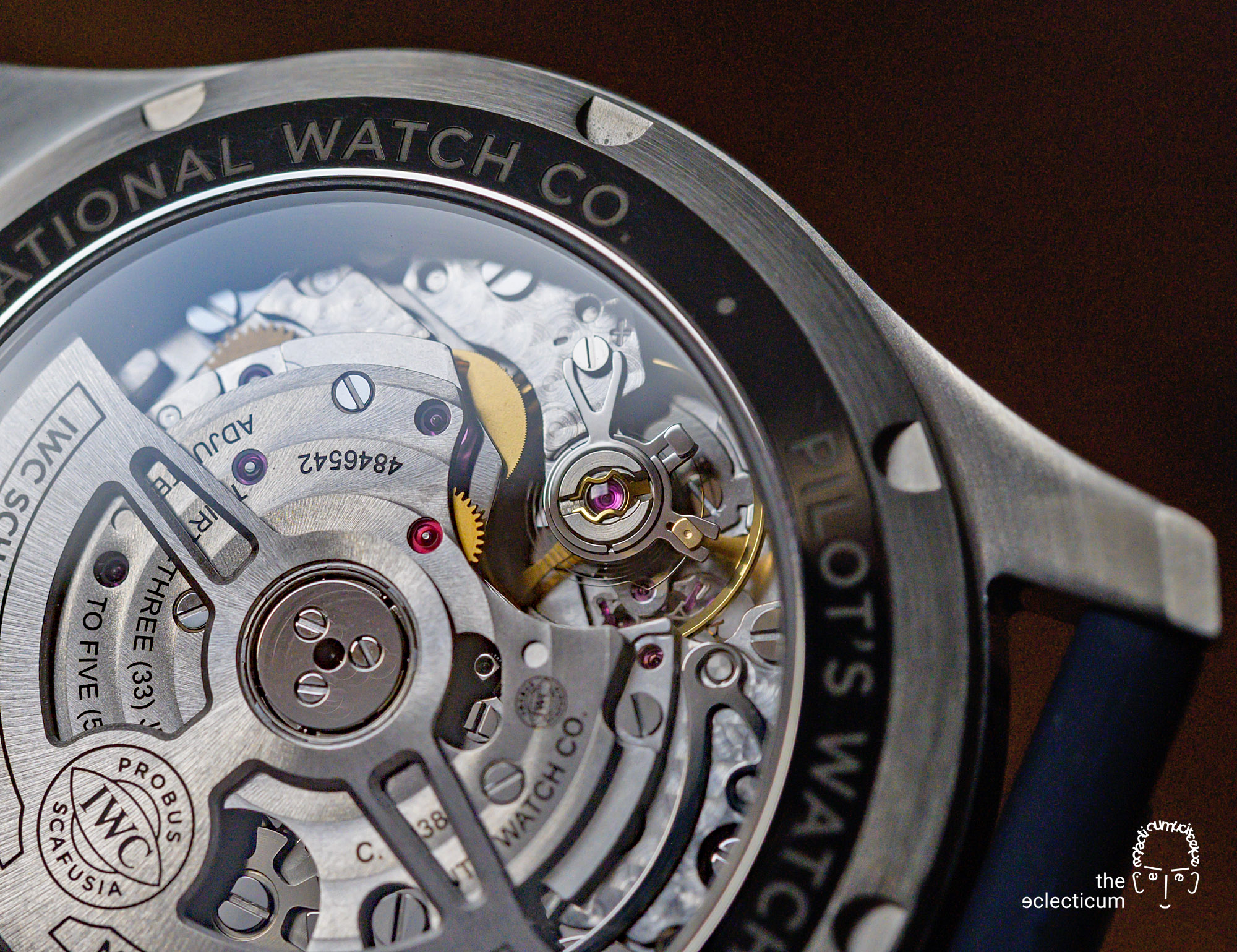 (Escapement section with Etachron regulator) The finishing btw is typically IWC: circular stripes on the automatic winding bridge and perlage on the base plate – no anglage though. That’s the technically excellent but otherwise straight approach IWC has adopted since a long time, very appropriate for this type of watch.

Of straps and bracelets: The EasX-CHANGE strap system

Quick-release strap systems are slowly becoming mainstream, and I think this is a welcome development. There are a number of such systems around, but a few of them are designed such that only the proprietary straps and bracelets match. This ensures precise fit of the strap/bracelet to the case, but also limits a customer’s choice to what a brand offers.

IWC now also introduces its EasX-CHANGE system to the Pilot’s Chronograph and with it three strap choices – rubber, leather or a stainless-steel bracelet:

Regardless of what you choose, you can easily release the current strap by use of a pusher/latch and mount a different one: 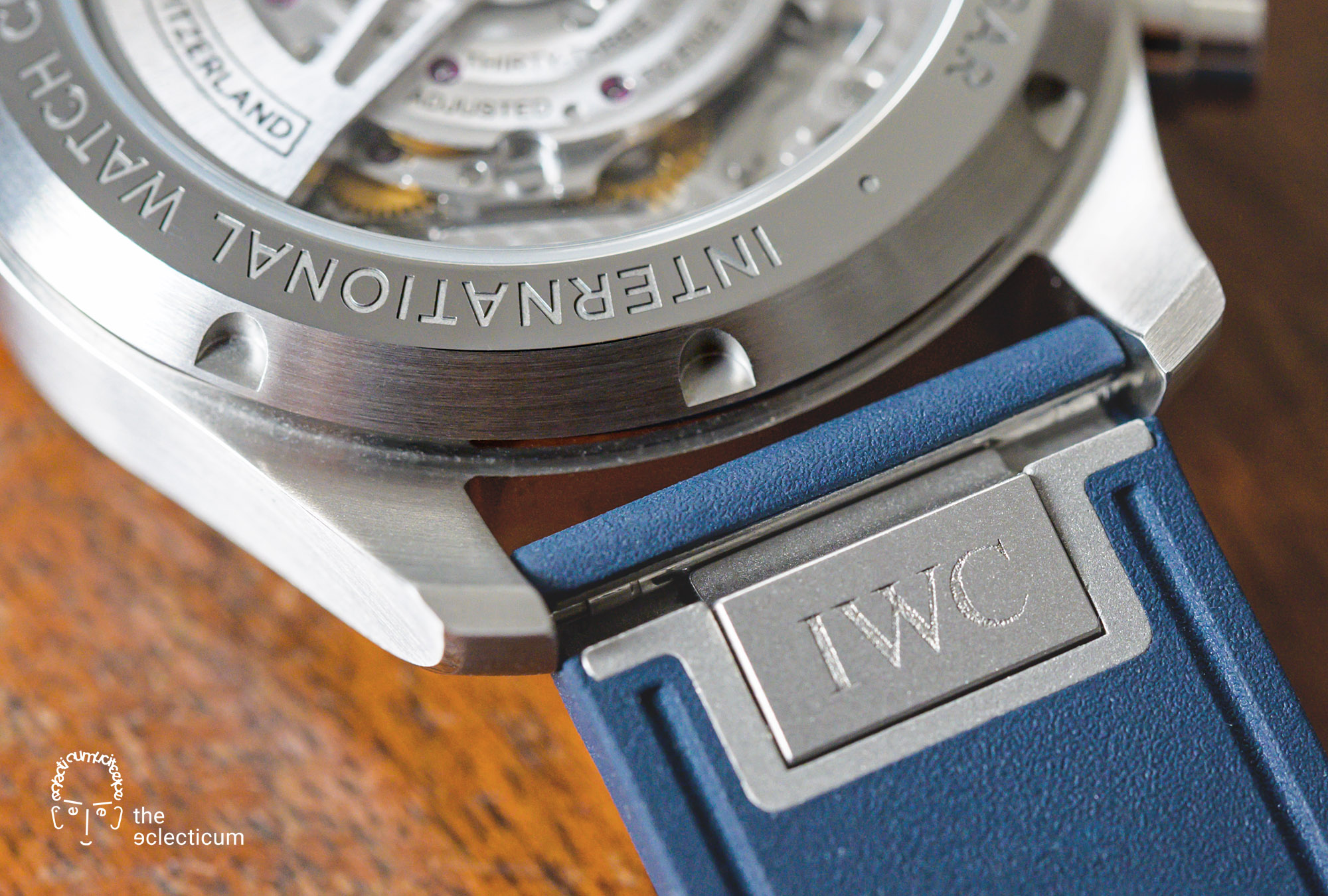 (Release button of IWC’s EasX-CHANGE system on a rubber strap) Both leather or rubber straps come on a simple, sturdy and well-finished IWC tang buckle: 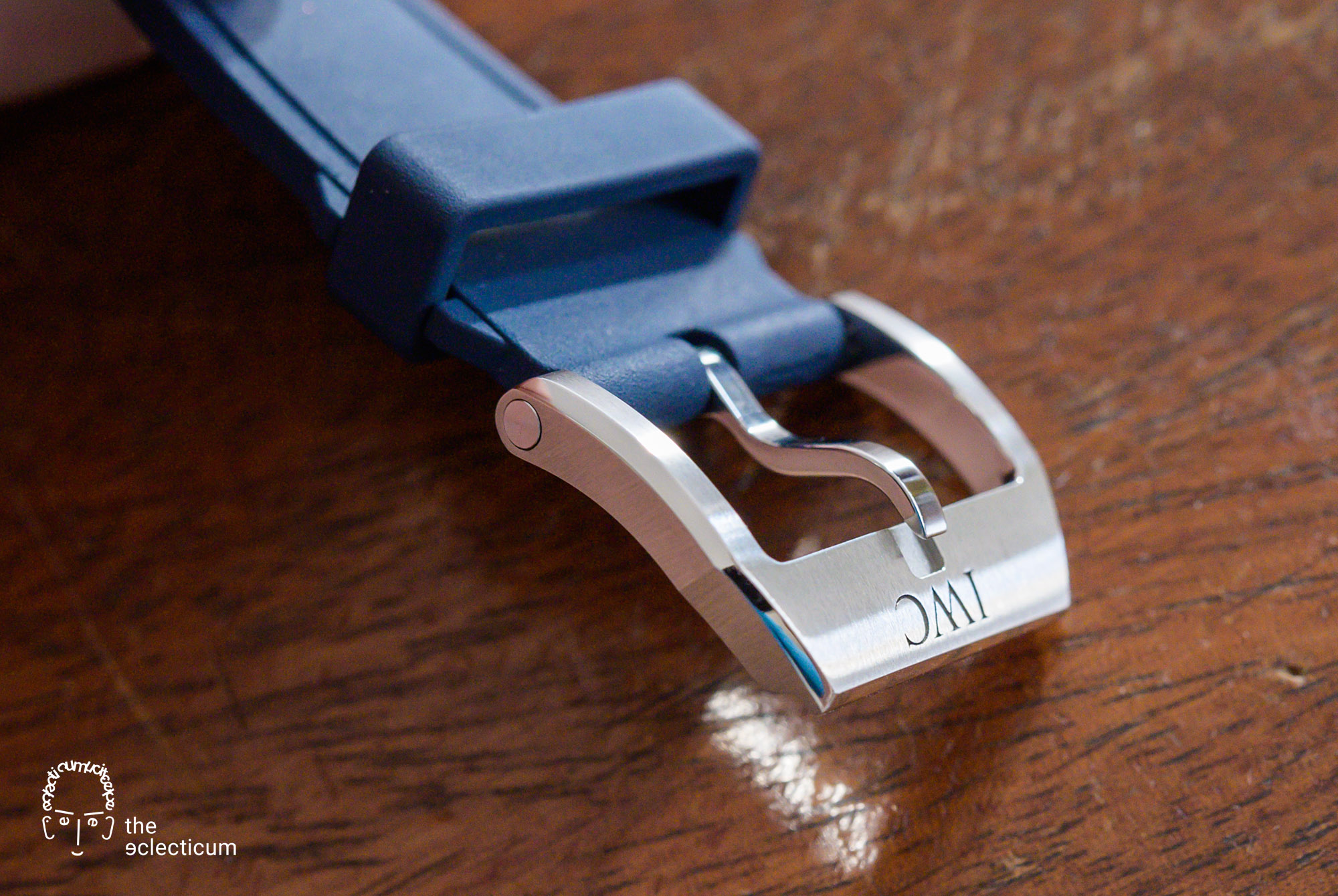 New as well is the bracelet, and here IWC had some pretty big shoes to fill as the company had designed a number of excellent and quite legendary bracelets in the past.

With the new stainless-steel bracelet IWC kept the 5-links-per-row construction and also the alternating polished and brushed design, with the latter being the outermost and the inner links. Former also have chamfered and polished outer edges: 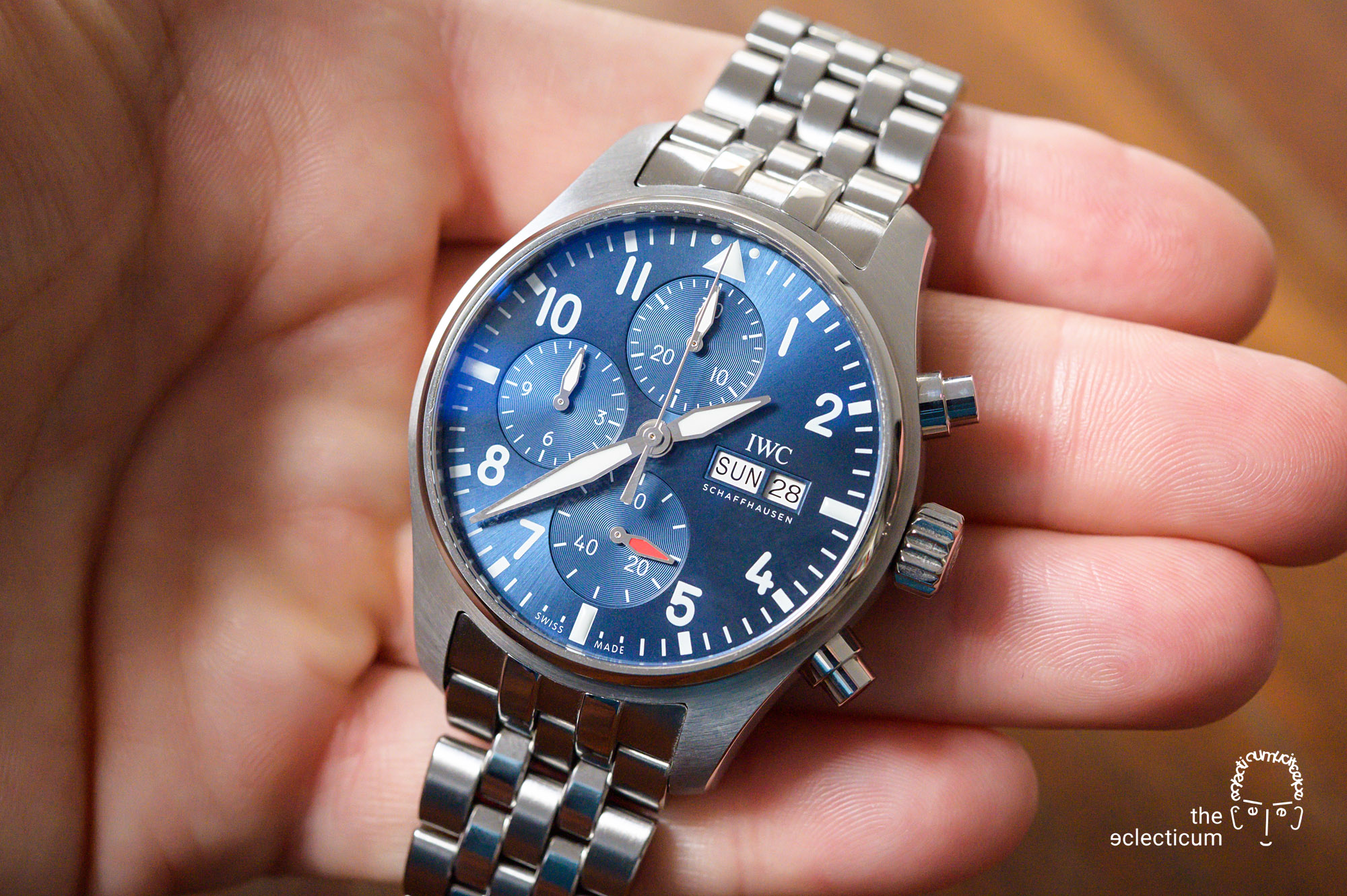 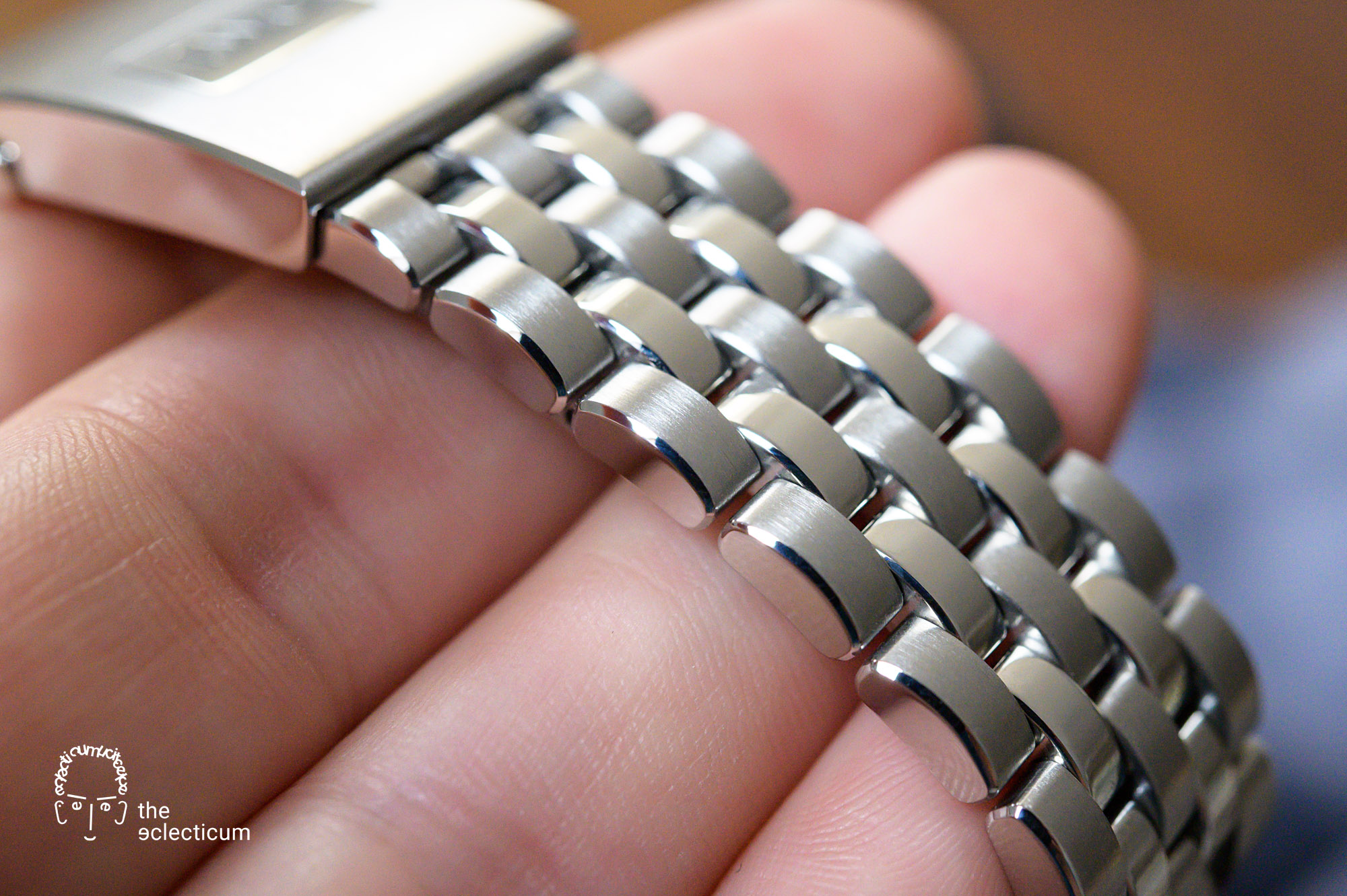 If you look closely, you might find that the quality of the brushing is not the same, unfortunately, on case and bracelet: the former being a bit more defined and have more aesthetical ‘punch’: 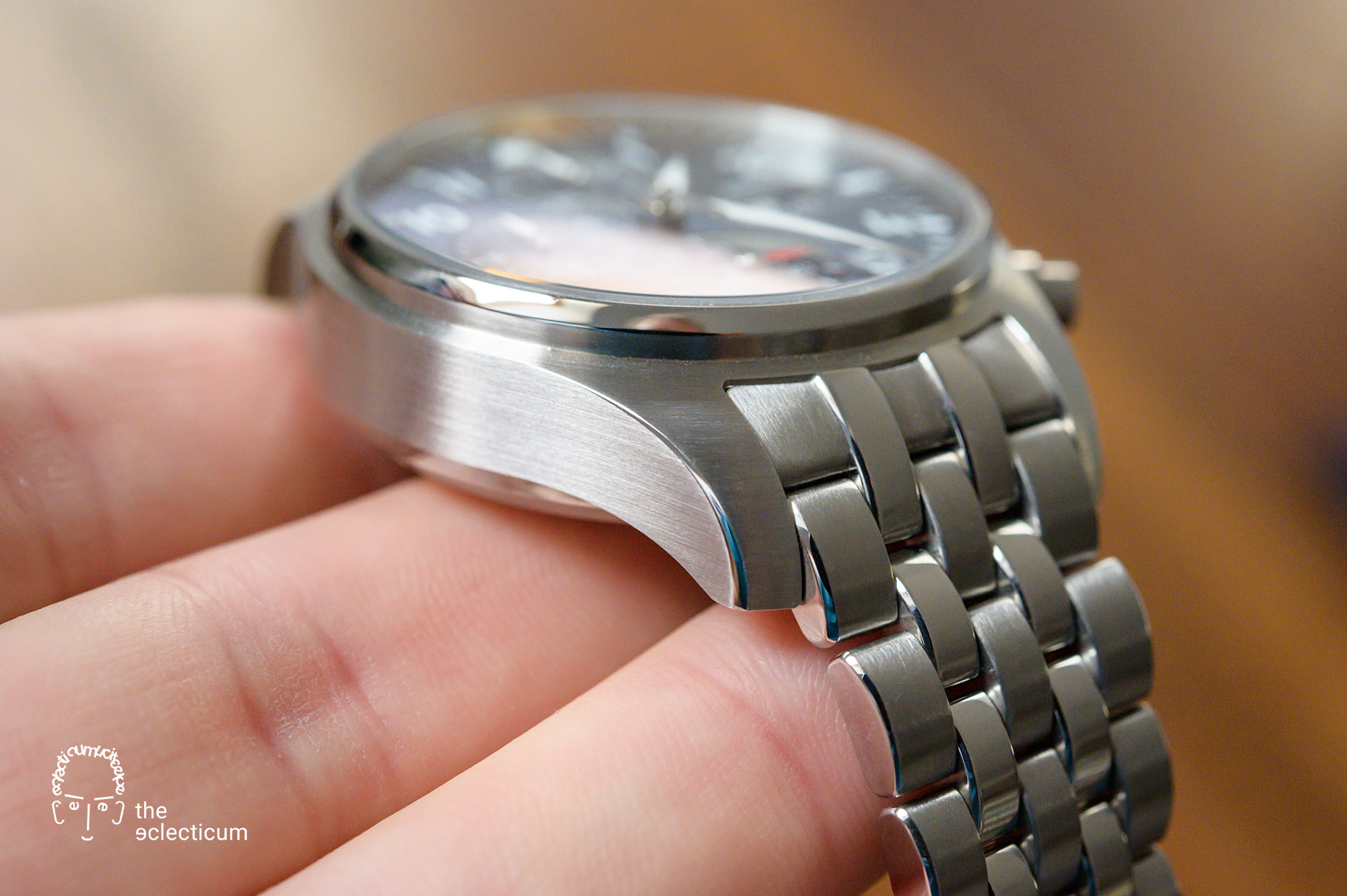 But that’s a minor issue, important is how the bracelet feels: sturdy, with a solid impression when you let it flow over your fingers, there is no rattling or squeaking, it has just the right amount of lateral flex (perfect to follow your wrist shape, but not excessively flexing like the new OMEGA Speedmaster bracelet), and – importantly – it does not pull hair!

IWC further implemented a micro-adjustment system, the one we know already from the A. Lange & Söhne Odysseus or the Glashütte Original SeaQ bracelets. The system is integrated into the clasp and activated by the logo pusher, upon which the length can be adjusted by about one link size. All this in an easy, confidence-inspiring way – perfect for one-the-fly – corrections. Also, the system really does not add much to the thickness. 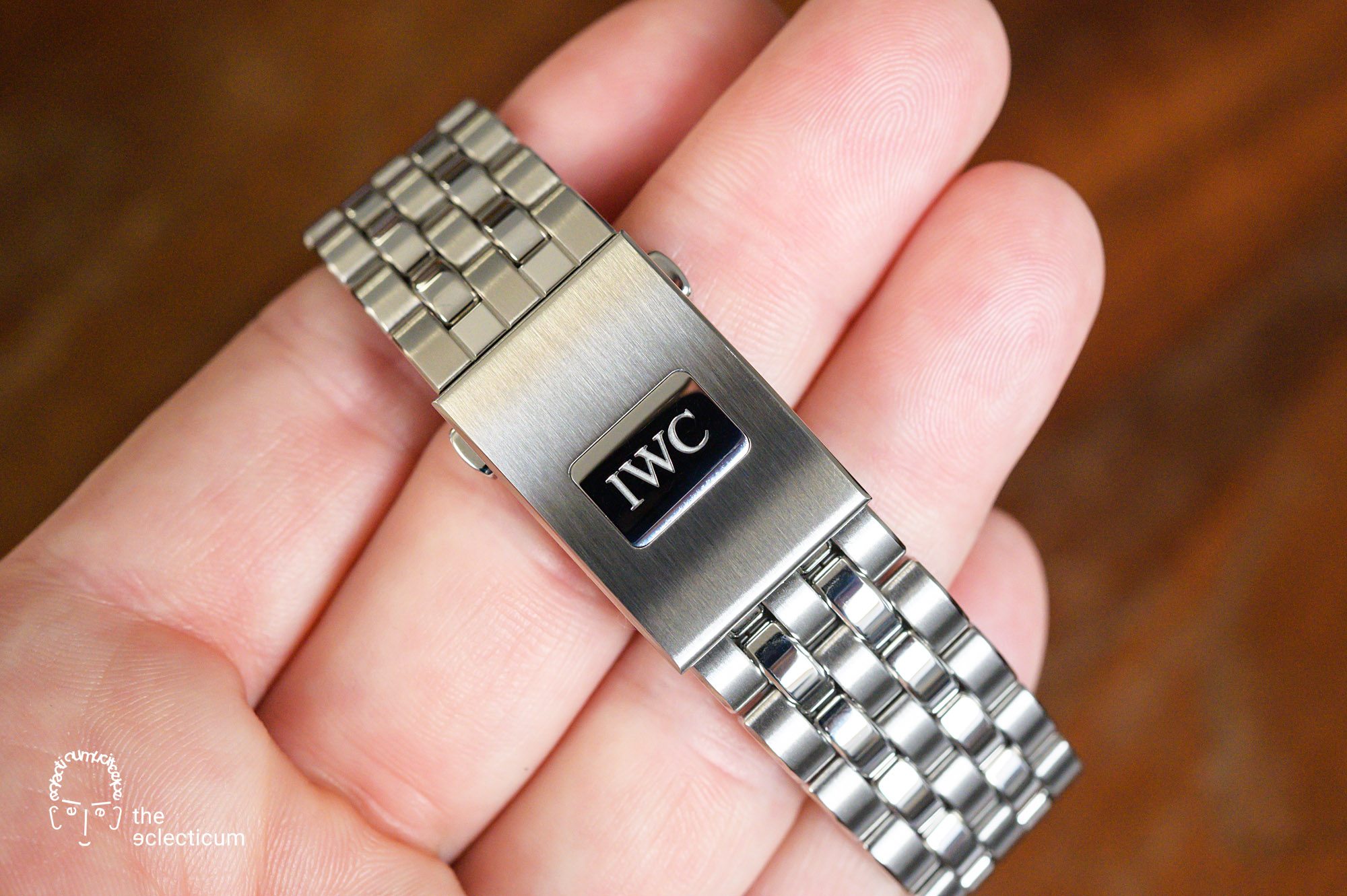 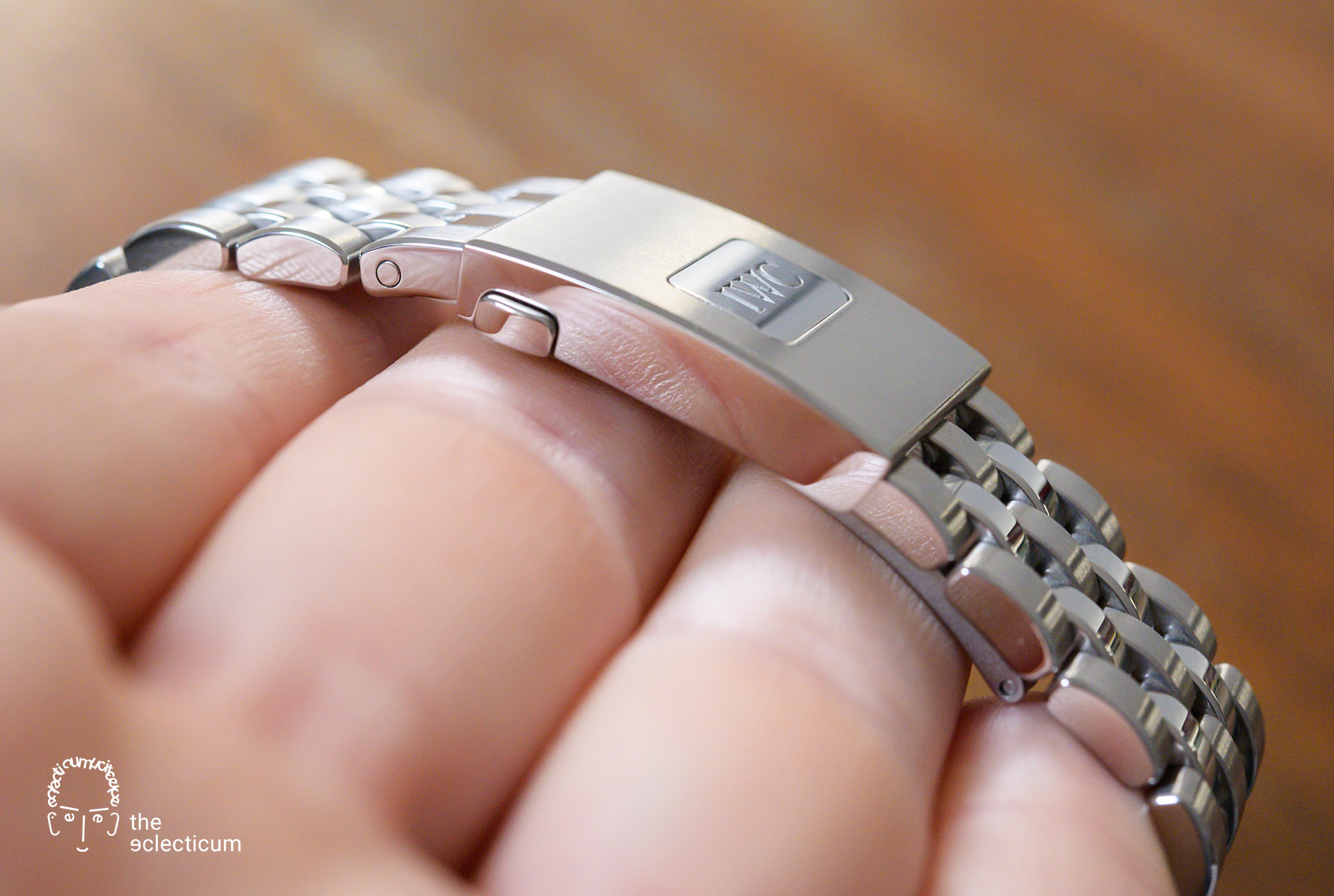 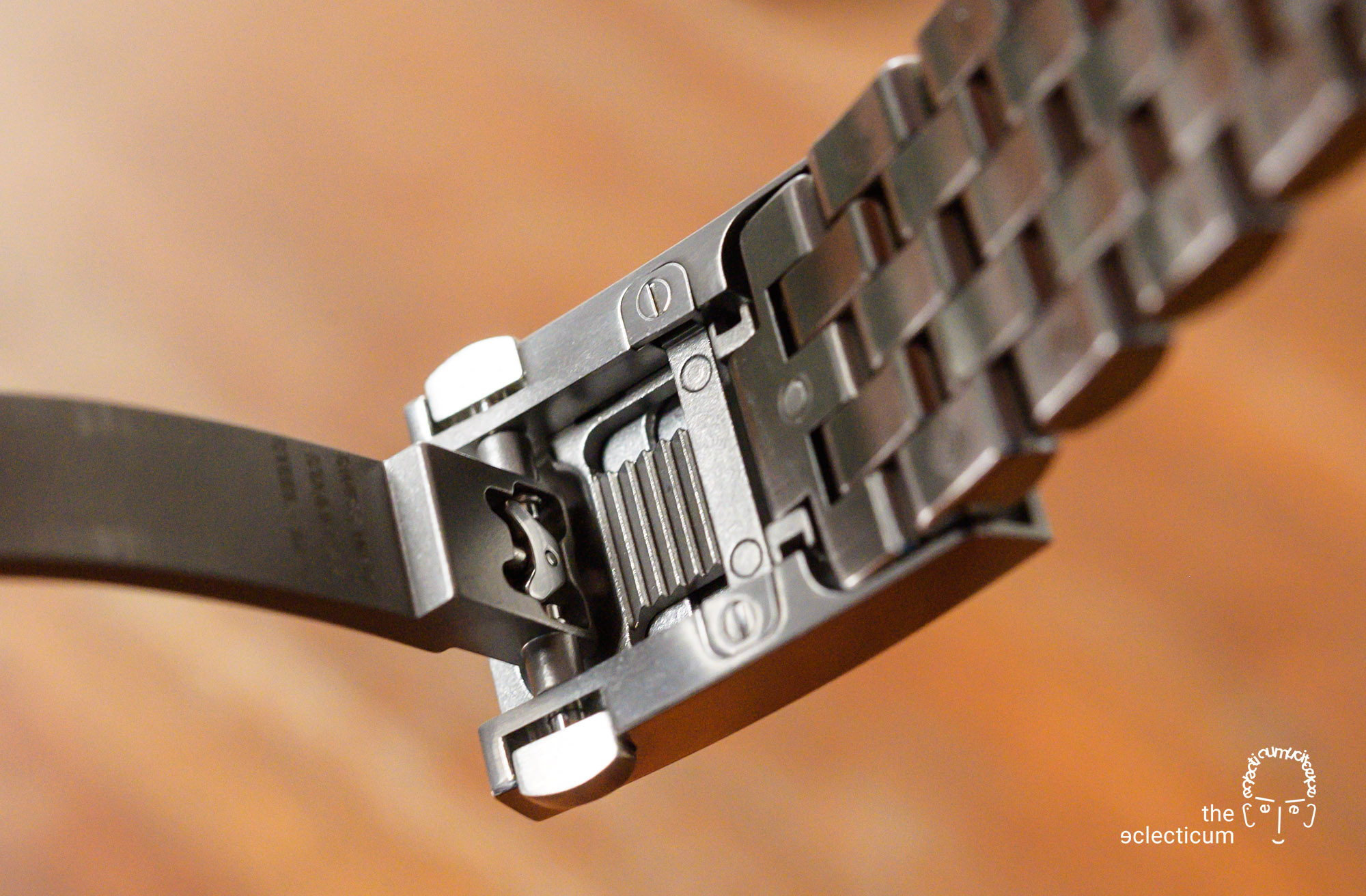 IWC also retained its tradition of creating fully serviceable bracelet links, with each of them able to be taken out by use of a special tool (i.e., toothpick ;-)). If you consider the years of service, you might get from a repairable mechanical watch I think it is reassuring to know that you can replace defective links as well. I know of watches with integrated bracelet that cannot be worn anymore as it is impossible to repair it. 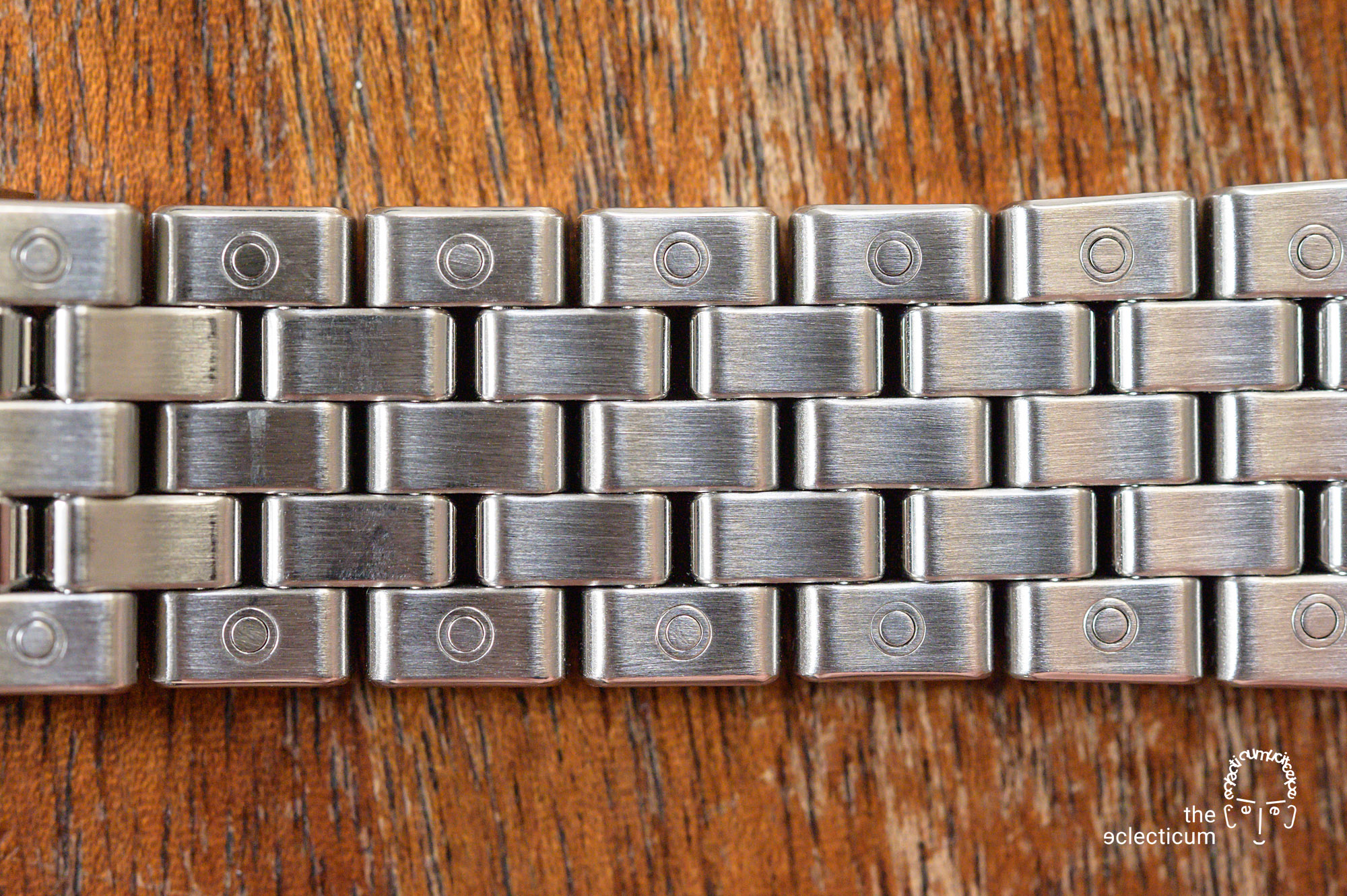 Finally, there is the EasX-CHANGE system as well, realised with a latch. You mount the bracelet from the top and release it the same way after you pulled the latch. The latch btw does not lock to the spring bar, but to the caseback: 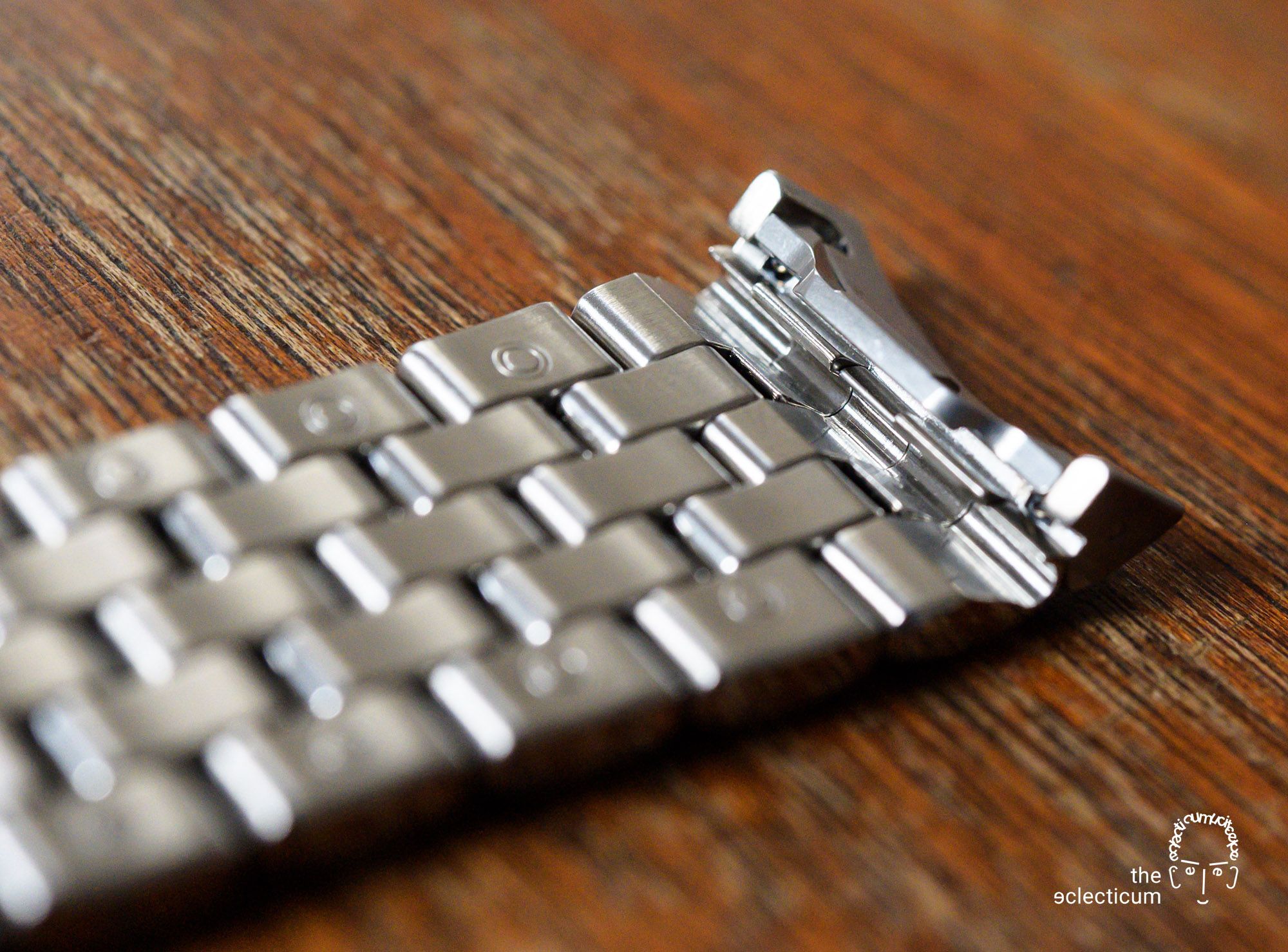 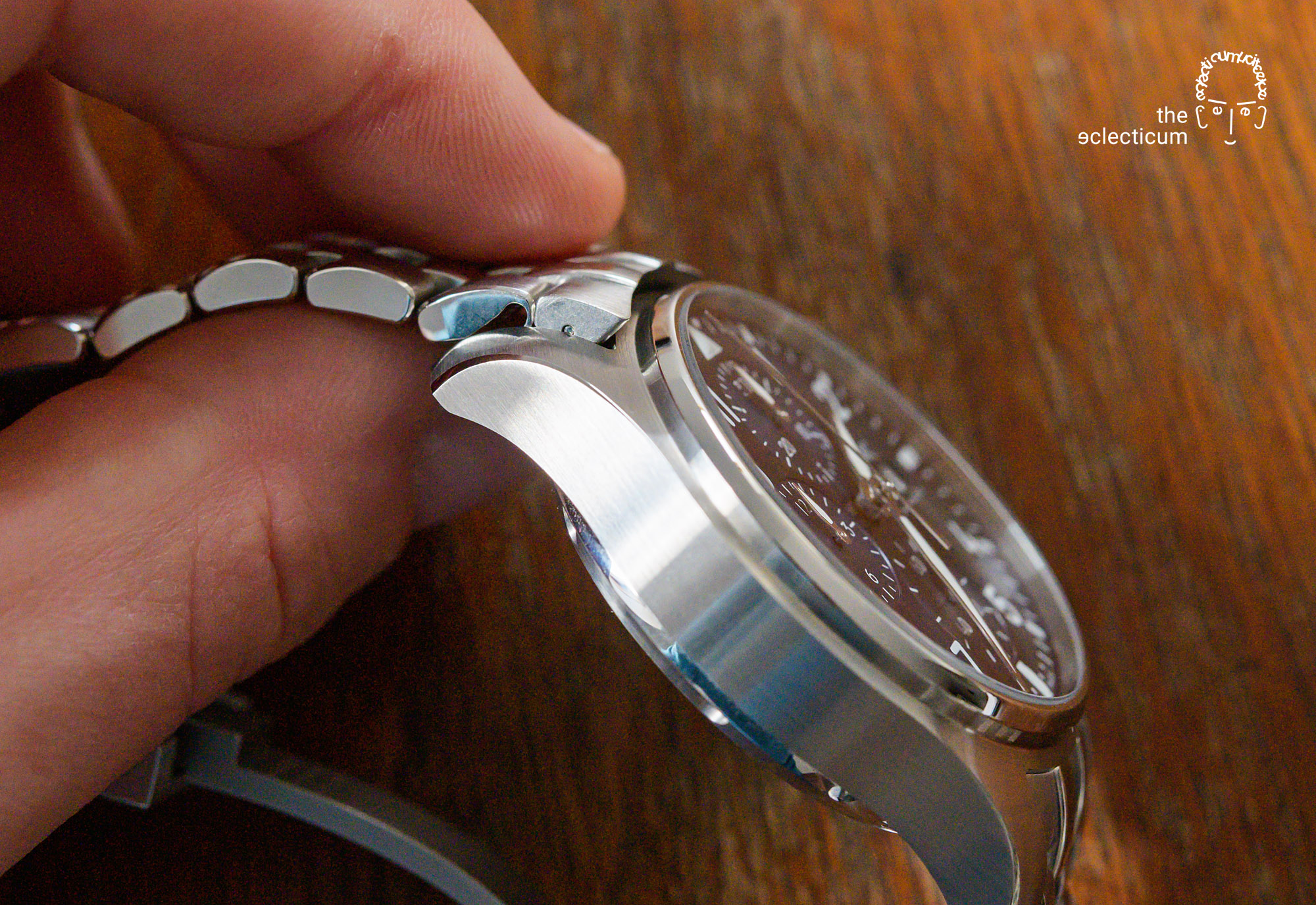 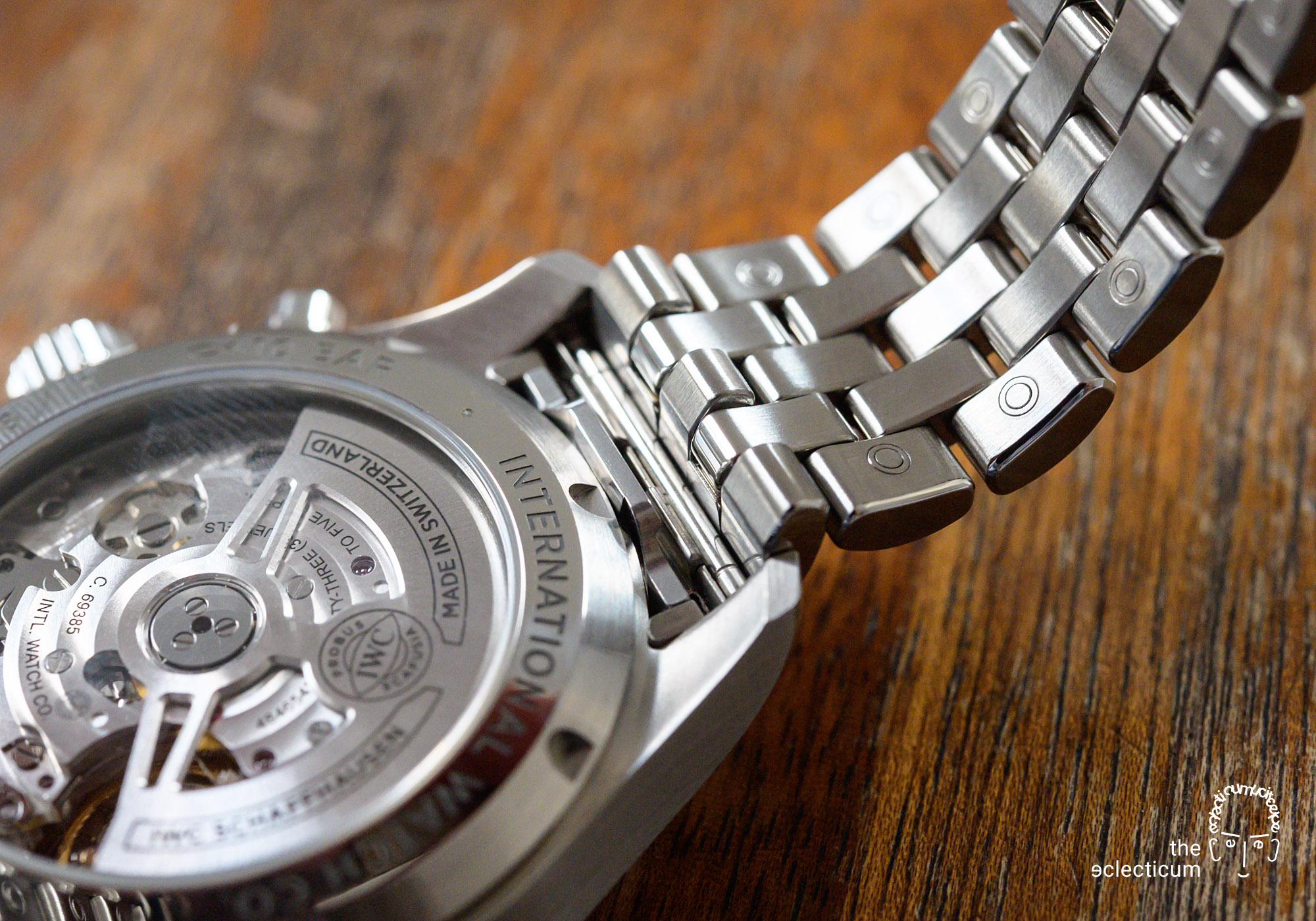 I mentioned the spring bar already, and this is a tiny little detail I guess many will appreciate: it implies (and I reconfirmed with IWC) that any strap with a matching lug width would theoretically fit: 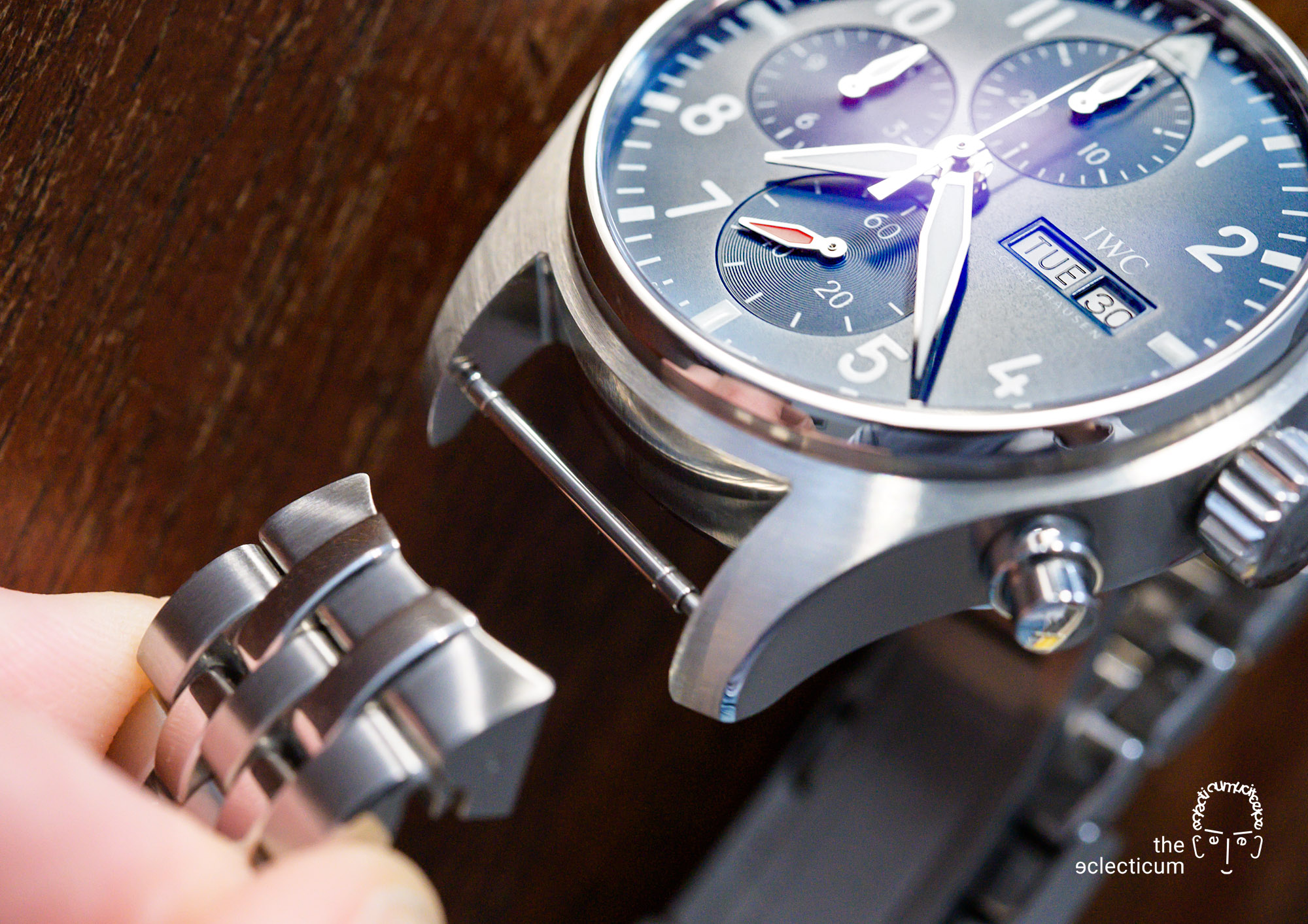 A combination of the best of both worlds: a precise, securely fitting with easy replacement without the need for any tools, yet at the same time not too restricting.

Overall, IWC has invested a lot of thoughts into their bracelet and strap accessories, and it paid out!

With the IWC Pilot’s Chronograph a third ‘legendary’ chronograph has been updated, after the Zenith Chronomaster Sport El Primero and the OMEGA Speedmaster. Likewise, the brand has addressed some smaller or bigger details, and successfully so. 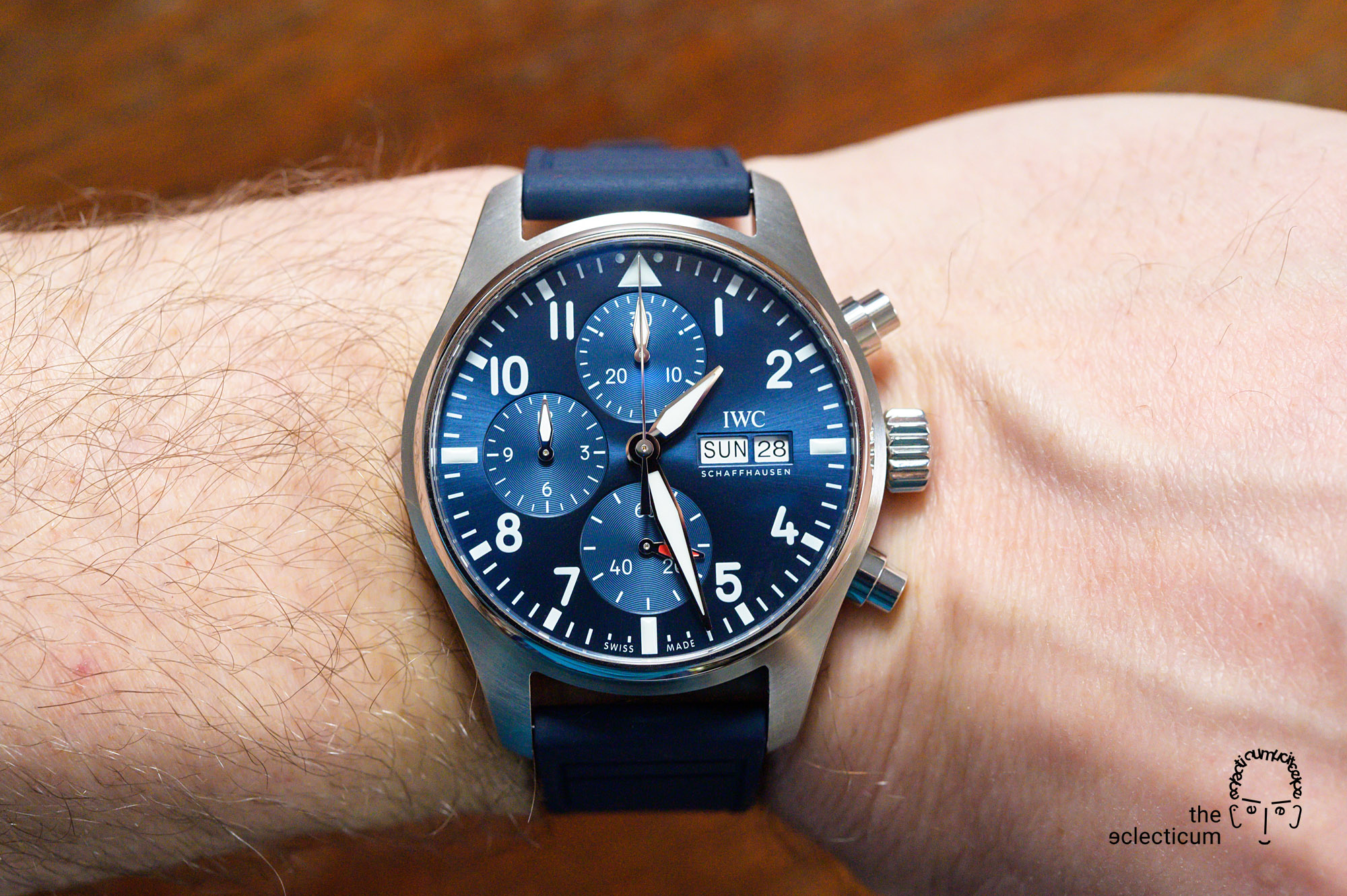 Essentially, IWC had brought the watch up to its own current standard (e.g., movement and bracelet upgrades), and in this course has refined a number of aspects of the ‘user interface’ of the watch. For a summary here is a video for your viewing pleasure:

And here comes the catch: what at first view appears as just one of those annual modifications in fact lifts the watch to a level it did not enjoy from quite some time. At its introduction the Pilot’s Chronograph represented the state of the art of tool watches, but then I think the watchmaking landscape seemed to have evolved more than this icon. 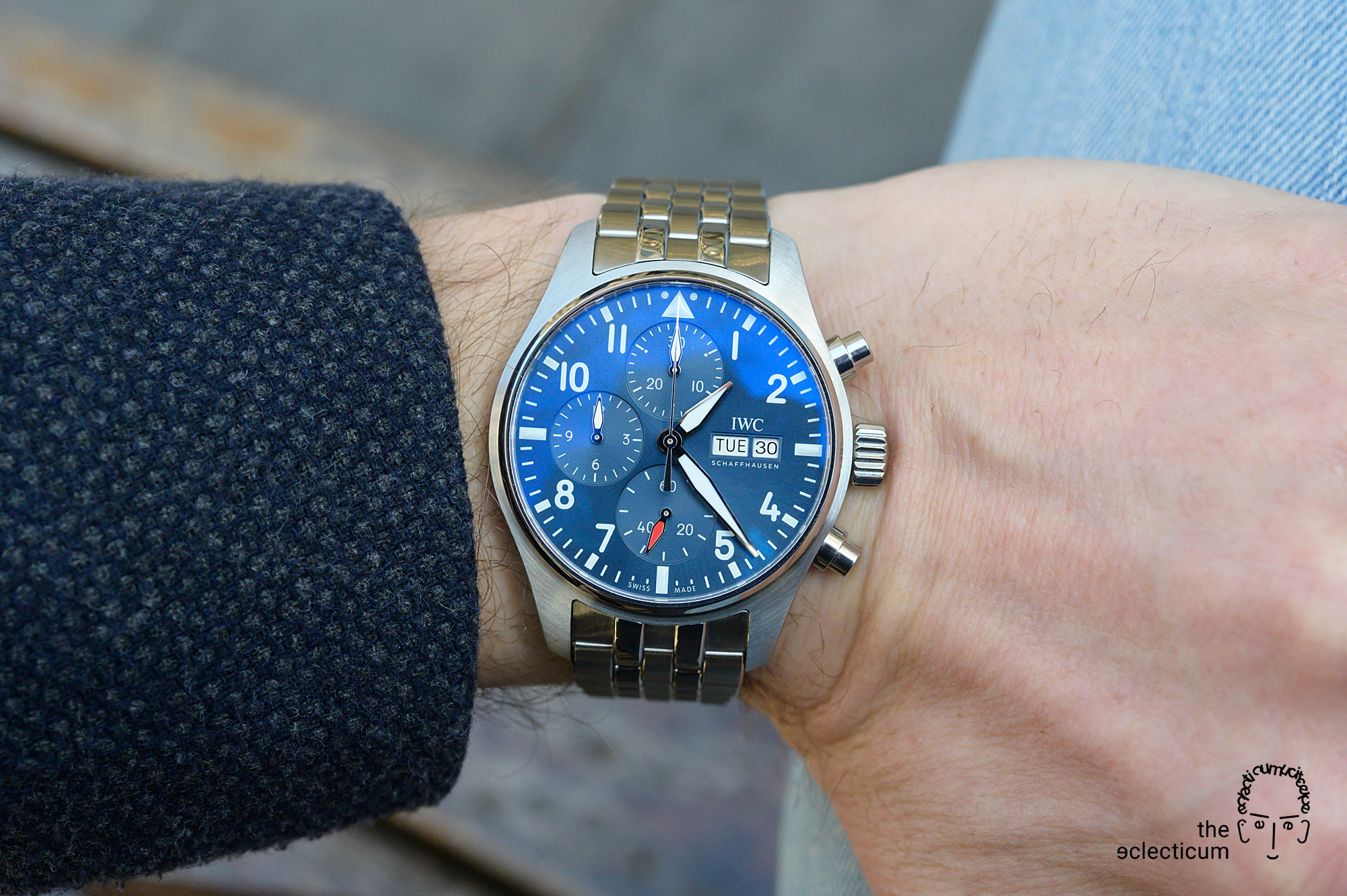 Now, the new Ref. 3881 corrects this and is a fine example of a ‘whole that is more than the sum of its parts’. The improvements are minor, mostly, on their own account, but taken together they make for an excellent holistic experience. They all point in the same direction, i.e., they advance the feel and comfort of the watch, well done, IWC! Enough so that I thought I give the IWC Pilot’s Chronograph more than I usually would do.

The value of passionate spending: A bespoke project about shoes with ´Atelier...

Of transgender sizes, considered transparency and a few plausible concepts –...
Scroll to top