A watch at the apex of an eminent manufacturer, the Patek Philippe 5004A Split-Seconds Perpetual Calendar Chronograph is as eclectic as it is miraculous 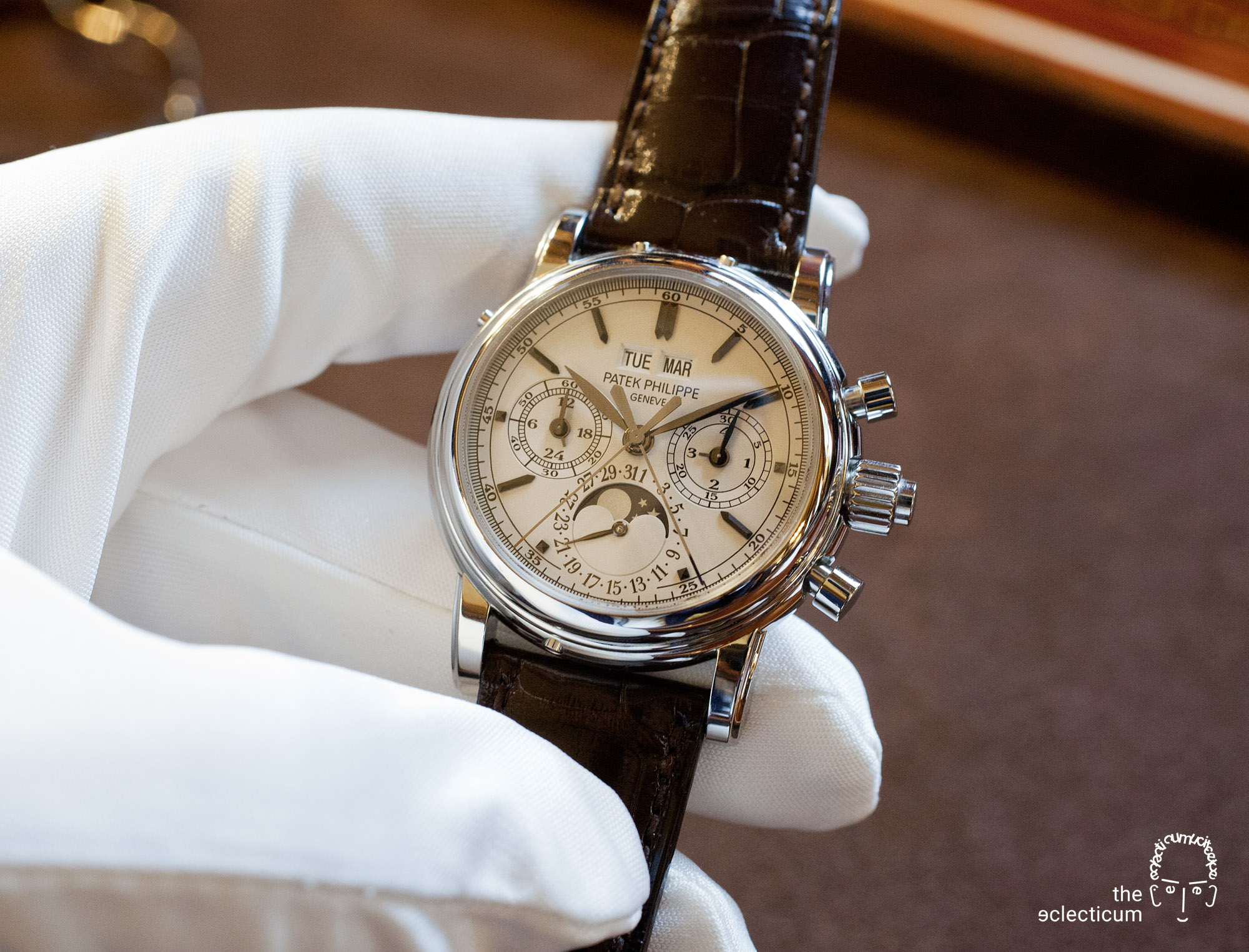 Sometimes one has to divert from the usual path, and this is what I am doing today: the ‘Gold Dust’ series usually deals with watches which comes with all the horological bells and whistles but are not really in the focus of the majority of collectors. For this edition its exactly the opposite, and the three keywords ‘Patek Philippe’, ‘Rattrapante’ and ‘steel case’ should suffice as hints for something special:

It is the Patek Philippe Ref 5004 which I am talking about – a holy grail for many, combining the manufacture’s highly sought-after split-second chronograph with a perpetual calendar, moon phases, as well as 24-hour and leap year indication. All this displayed on arguably one of the most classically beautiful dials ever created by Patek Philippe – but here in a rare (for the brand) combination with a stainless steel case: 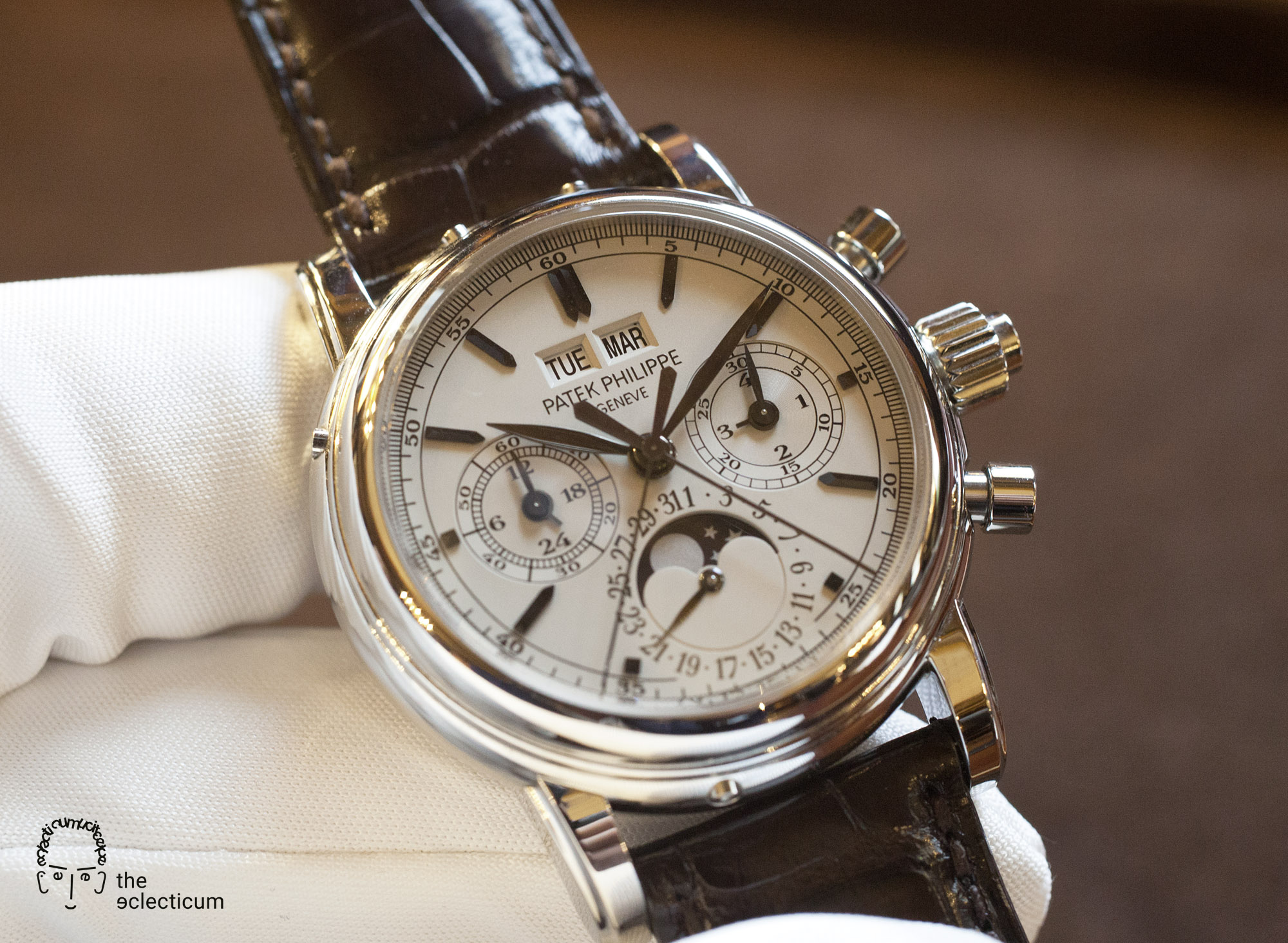 The Ref. 5004A (‘A’ for ‘acier’ = steel) was created as the final swan song to a legendary era of Patek Philippe chronographs, and was offered exclusively through Patek Philippe’s Geneva Salon.

The watch is externally very close to its platinum sibling housed in the same gorgeous (but for some a bit thick, hence also called ‘the Hamburger’) 36mm case with the single discernible difference being the baton indices, in contrast to the Arabic ones of the ‘prestigious’ production version. Those indices are in a mesmerising dark grey finish, giving the watch a very subtle but strikingly attractive (to me) modern touch, amidst all this wonderfully classical ensemble.

The hands are equally fantastic with a magical dark grey, semi frosted finish which is said to change a bit over time. It ‘grows’ on you and with, if you like… 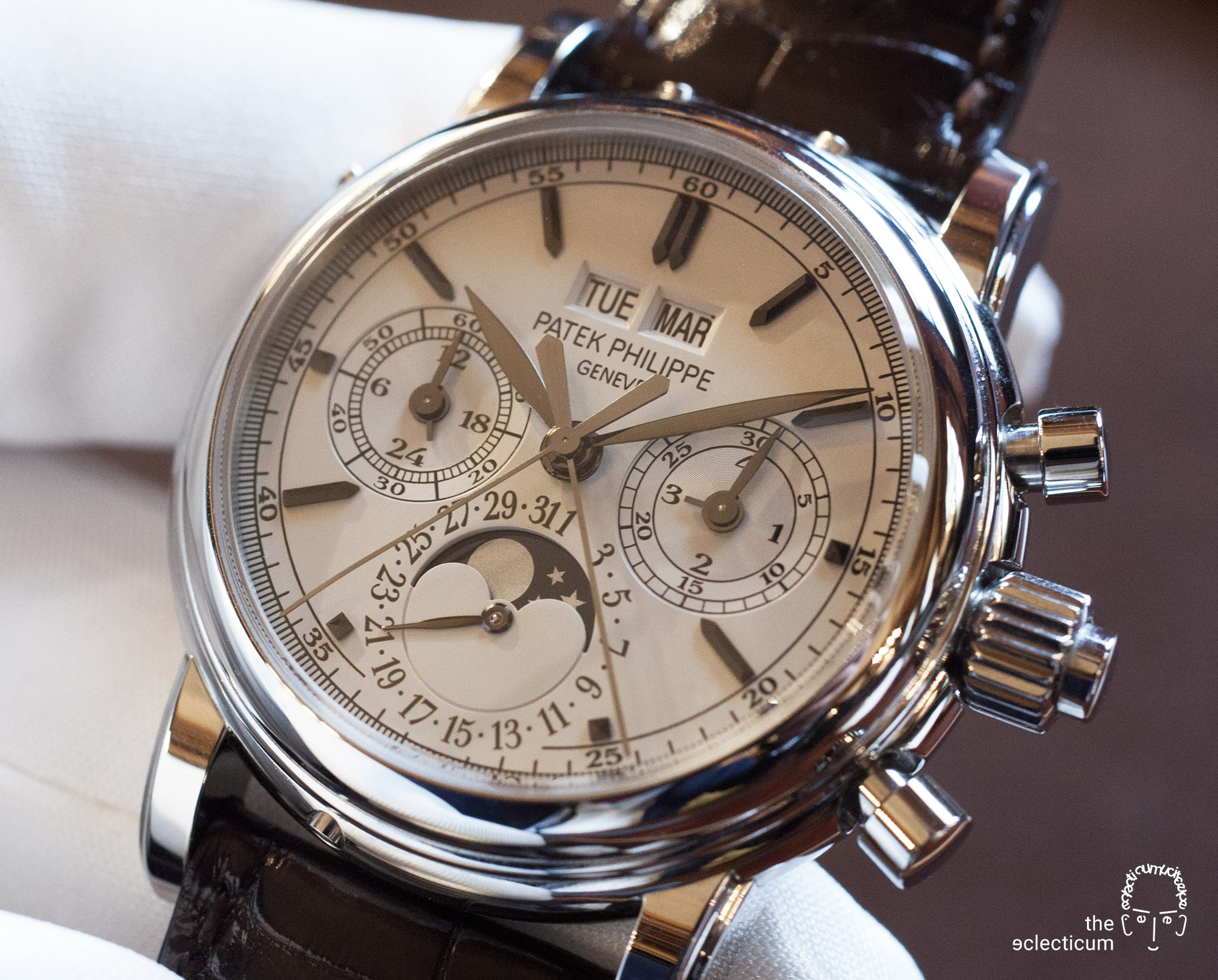 Then comes the 5004’s case, small at 36mm but substantial from the sides, created at an era when Patek Philippe would combine them with solidly dimensioned crowns and pushers, such as to emphasise the already marvellous haptics of their chronographs. Just note these details… 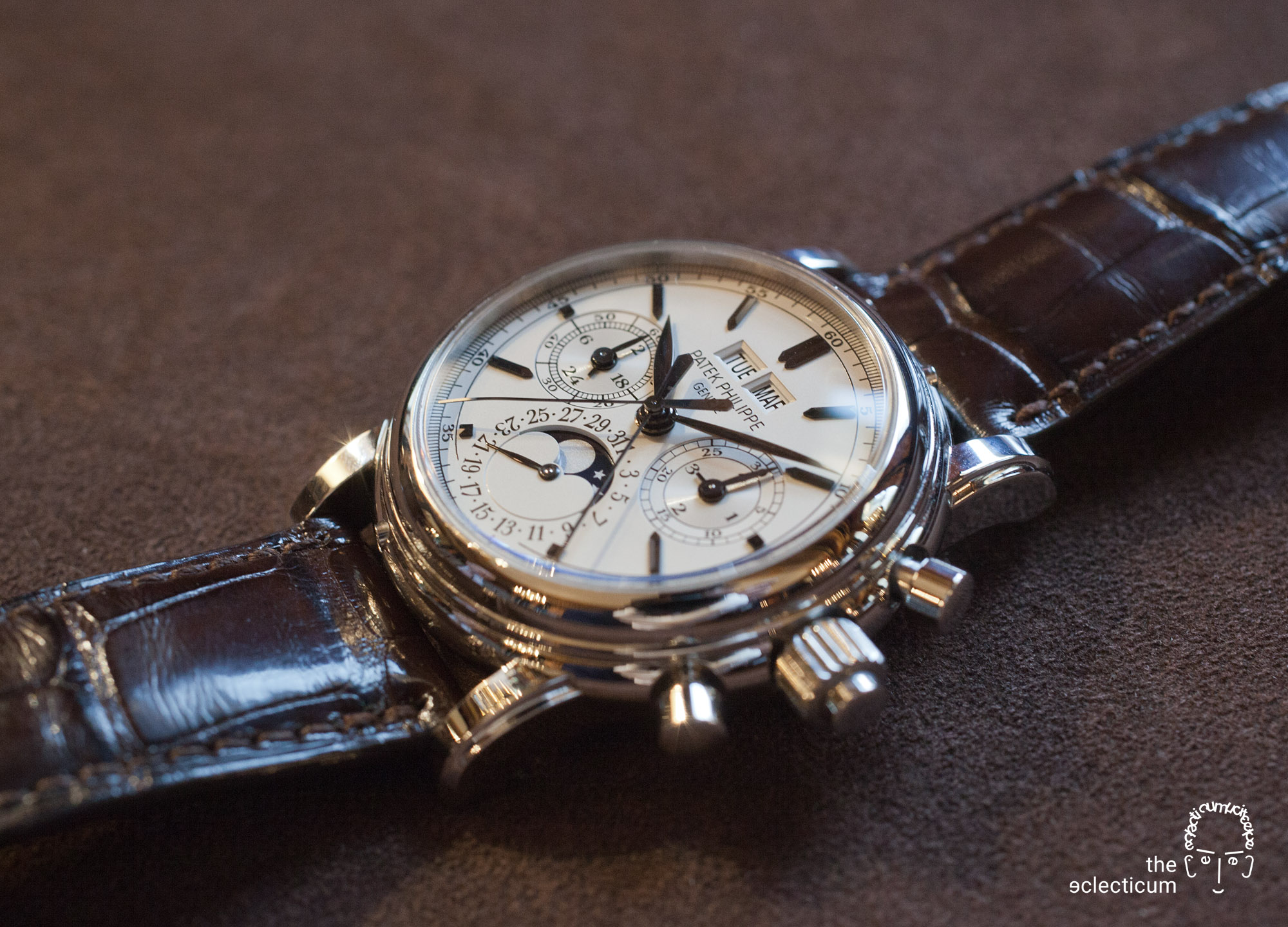 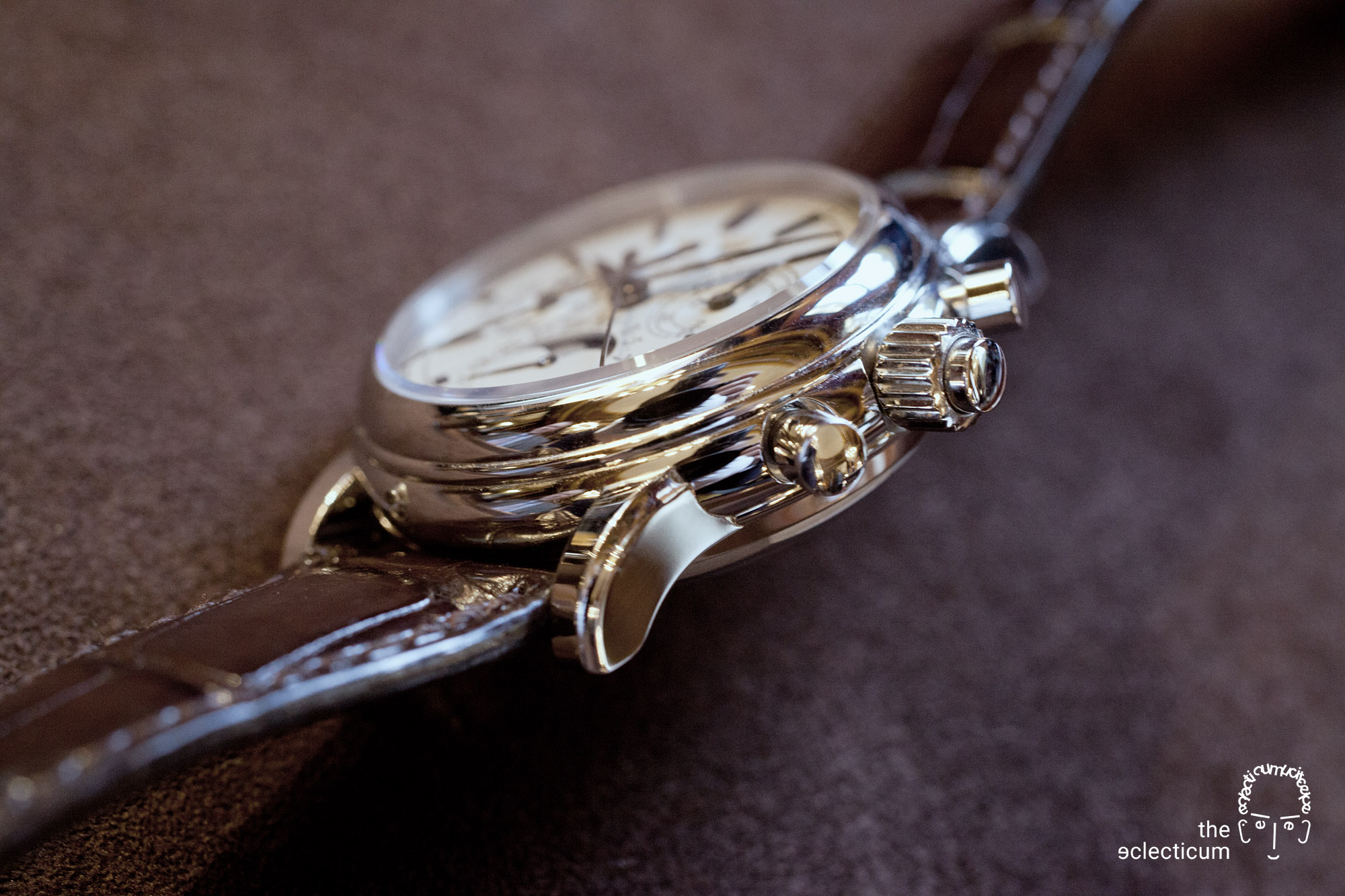 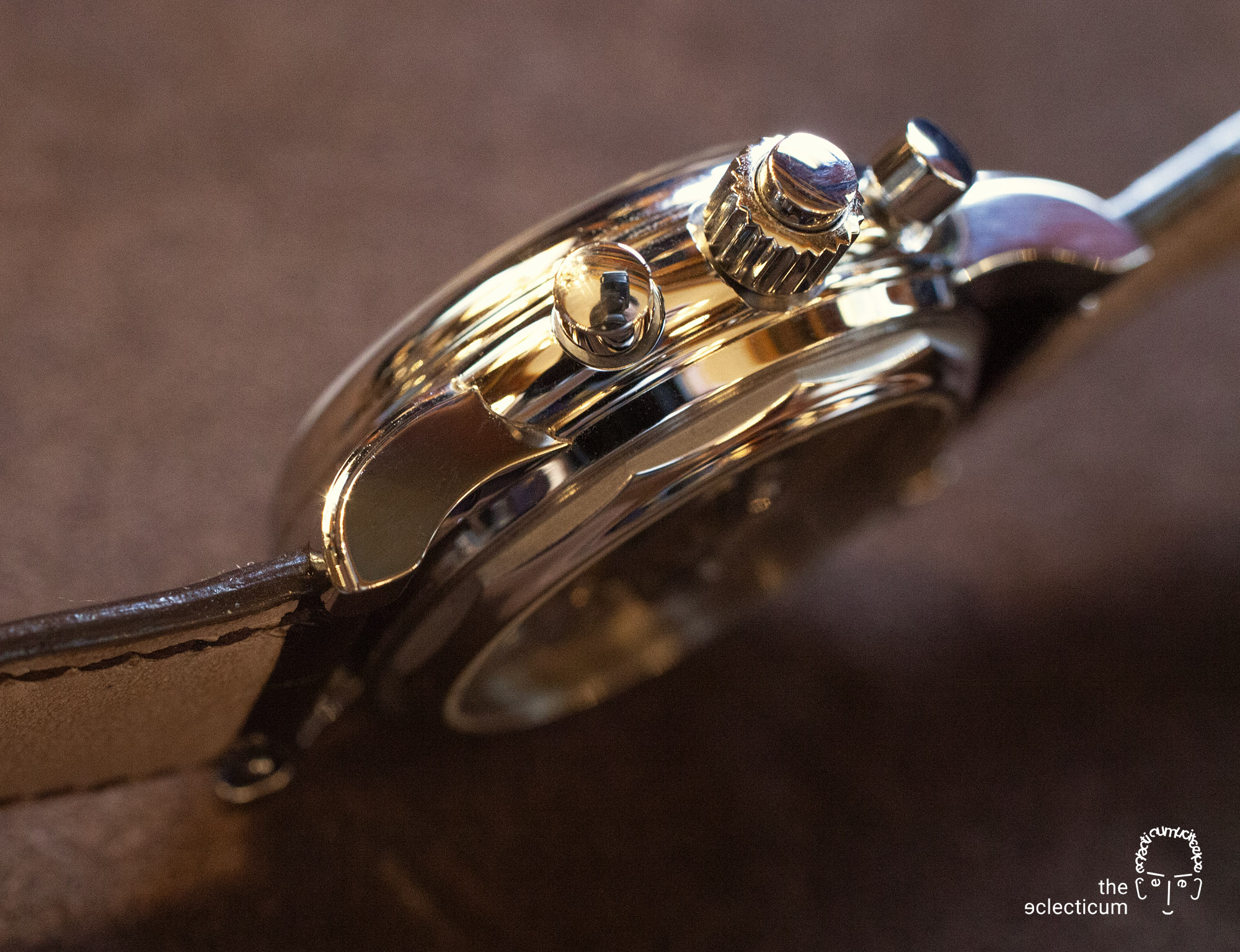 The movement, Cal. CHR 27-70, is not only marvellous to admire, it is also based on Patek’s most venerable chronograph base movement, the Cal. CH 27 born originally as a Lemania 2310. A hand wound chronograph of most traditional construction, revered by collectors, and here finished and assembled by the eminent specialists in the complications department – this makes a difference if you look closely (read also our article “The pinnacle of (fine) watchmaking: Patek Philippe”!). 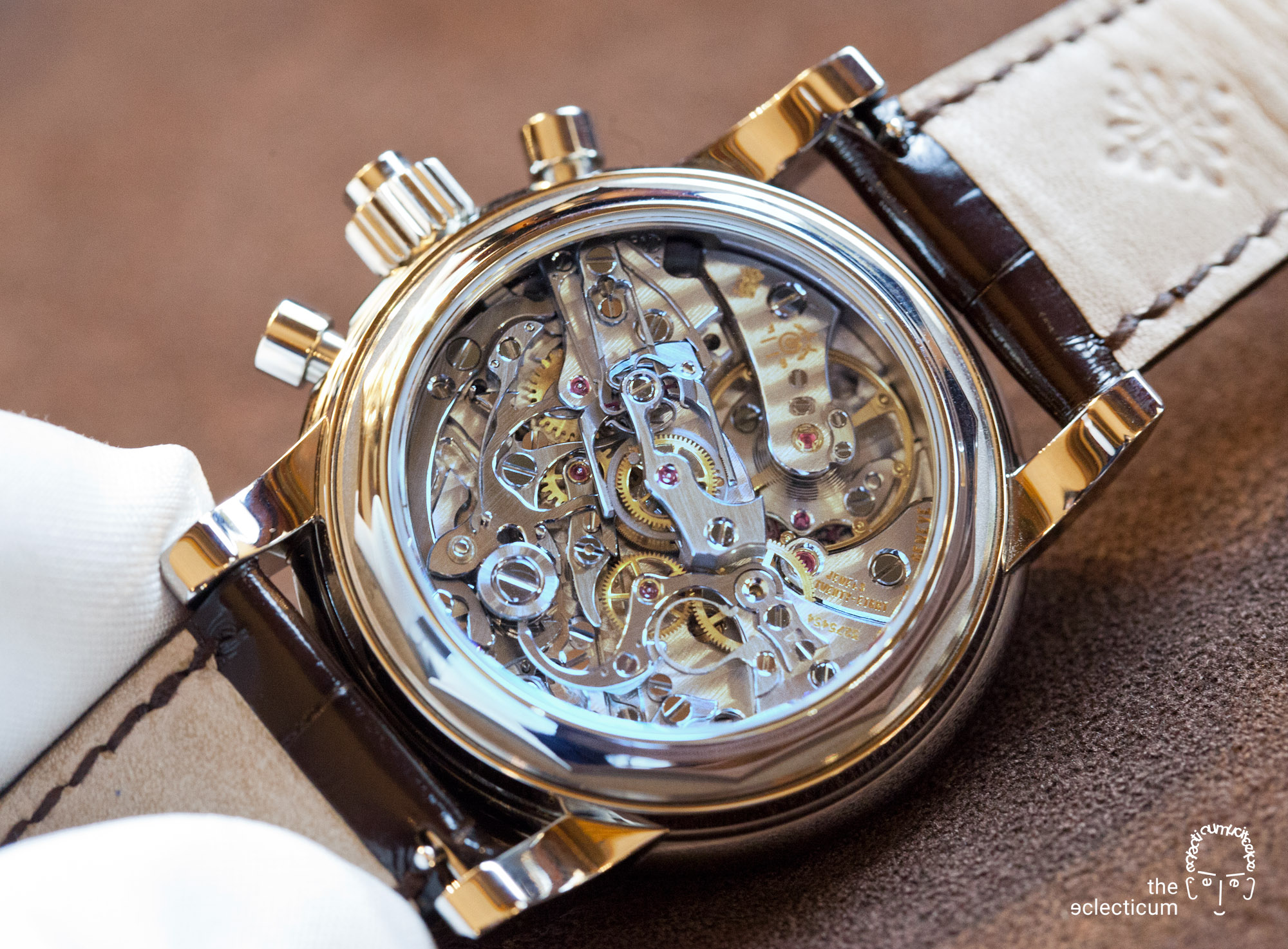 It is not only the aesthetics which are remarkable. One would assume that a brand with Patek Philippe’s ample experience with complicated watches, most notably chronographs of many flavours and perpetual calendars, creating a rattrapante would be straightforward tasks. However, is is not, and this is a fine testament to the thoroughness and the technical ethics a haute horlogerie manufacturer prides itself: In fact, in a personal quest of then president Philippe Stern to ‘get it right’ the 5004 pushed the technicians and watchmakers in Geneva to their limits:

“The problem was that the Lemania 2310 or CH 27, was never intended to be a split seconds chronograph. We had two major challenges. The first was the pinion that all the hands – hours, minutes, chronograph seconds and split seconds – had to be made even longer and we were really stretching the limits of what was possible. Even the slightest mistake it was easy to bend this pinion. And second thing was that the CH 27 would experience rattrapante drag each time the split seconds function was activated.” (Philippe Stern on the challenges Patek Philippe faced, reported by Revolution Magazine) 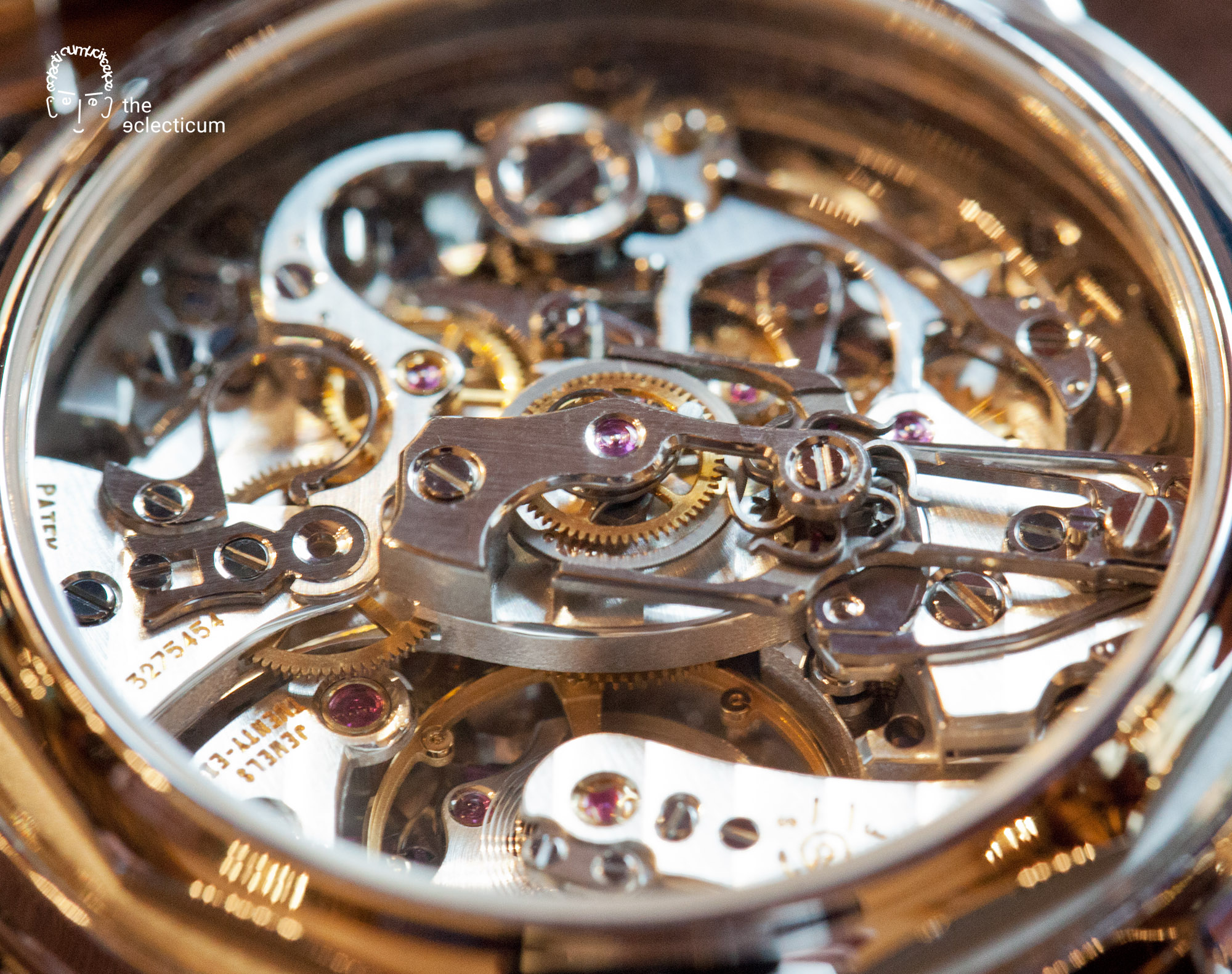 (Close-up of the Patek Philippe Isolator) Patek devised an ingenious mechanism which lifts the rattrapante roller from the heart cam and only pushes it back upon release of the split-seconds function – it other it isolates this function from the movement, and minimised the negative effect on the amplitude. Collectors call this Patek Philippe Isolator also the “octopus wheel” (and this although it only has 6 spokes…): 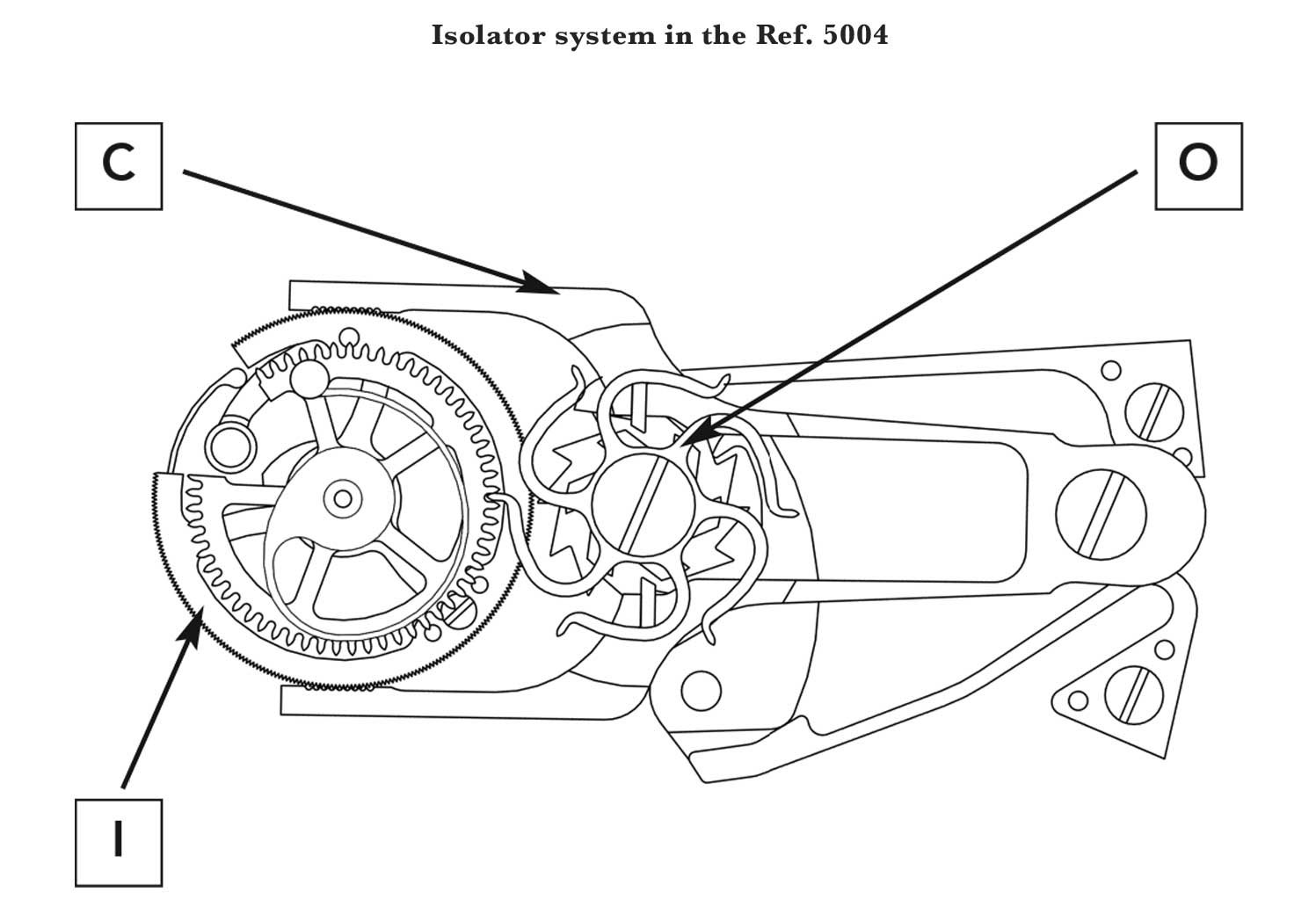 (The Patek Philippe Isolator: once the rattrapante clamp C arrests the rattrapante wheel, the isolator O released the rattrapante roller from the spring wheel I – thereby uncoupling the mechanism from the going train. Image © Patek Philippe) In almost all cases, Patek Philippe’s Grande Complications in steel command significant markups should they come to sale, a fact which invites flippers to the table. In this case however the manufacture tried to contain this in that all of the pieces were delivered with the name of the client engraved on both the solid and the sapphire casebacks which were included in the box.

Side note: There is some controversy on the 5004A amongst seasoned Patel Philippe collectors: reportedly (by Patek Philippe themselves), the 5004 has only been created at a pace of 12 watches per annum, over a period between 1994 and 2009. With the 5004A the manufacture seems to be able to add 50 such watches all of a sudden, assumingly making the steel version the most abundant of them all? There are further rumours that Patek Philippe even made more than the 50 publicised pieces.

Despite the controversies the 5004A has done well at auction although it did not really skyrocketed (yet) like a complicated Patek Philippe in steel would suggest (a pristine 5004A had been sold at Phillips in November 2018 for about 550,000 CHF, another one sealed specimen went on Ebay for $399,000 in February 2015).

But who of us would like to part with such beauty? 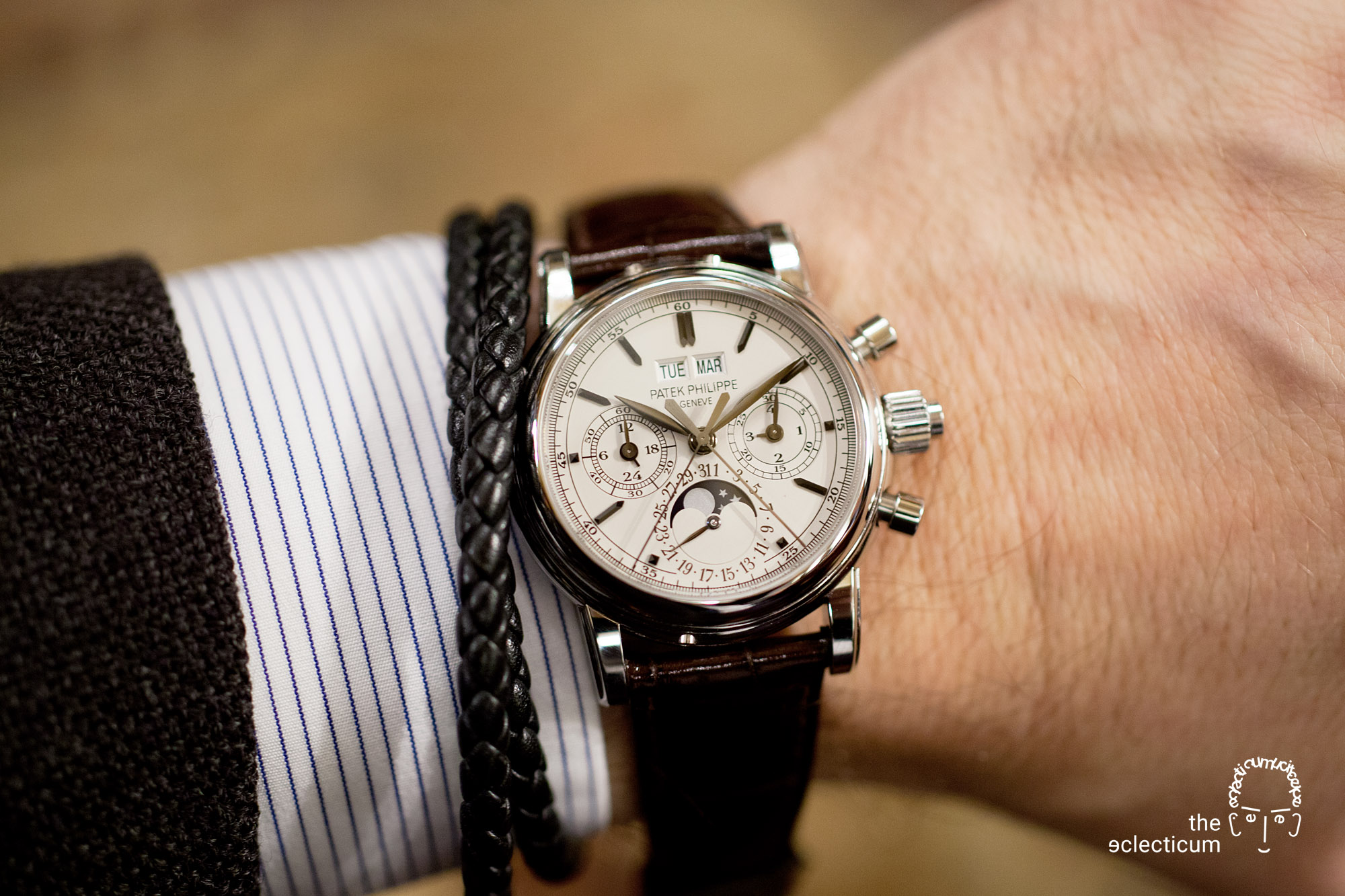 Here at the eclecticum we appreciate watch suis generis, and not because of any elusive future investment value. However you take it, the Patek Philippe 5004 is a pinnacle of watchmaking, a holistic one as aesthetics, technology and execution complement one another in a most advantageous fashion: each detail speaks of an impeccable eye for the detail, of a seasoned sense for design and – of course – of all the technical prowess a house like Patek Philippe possess. 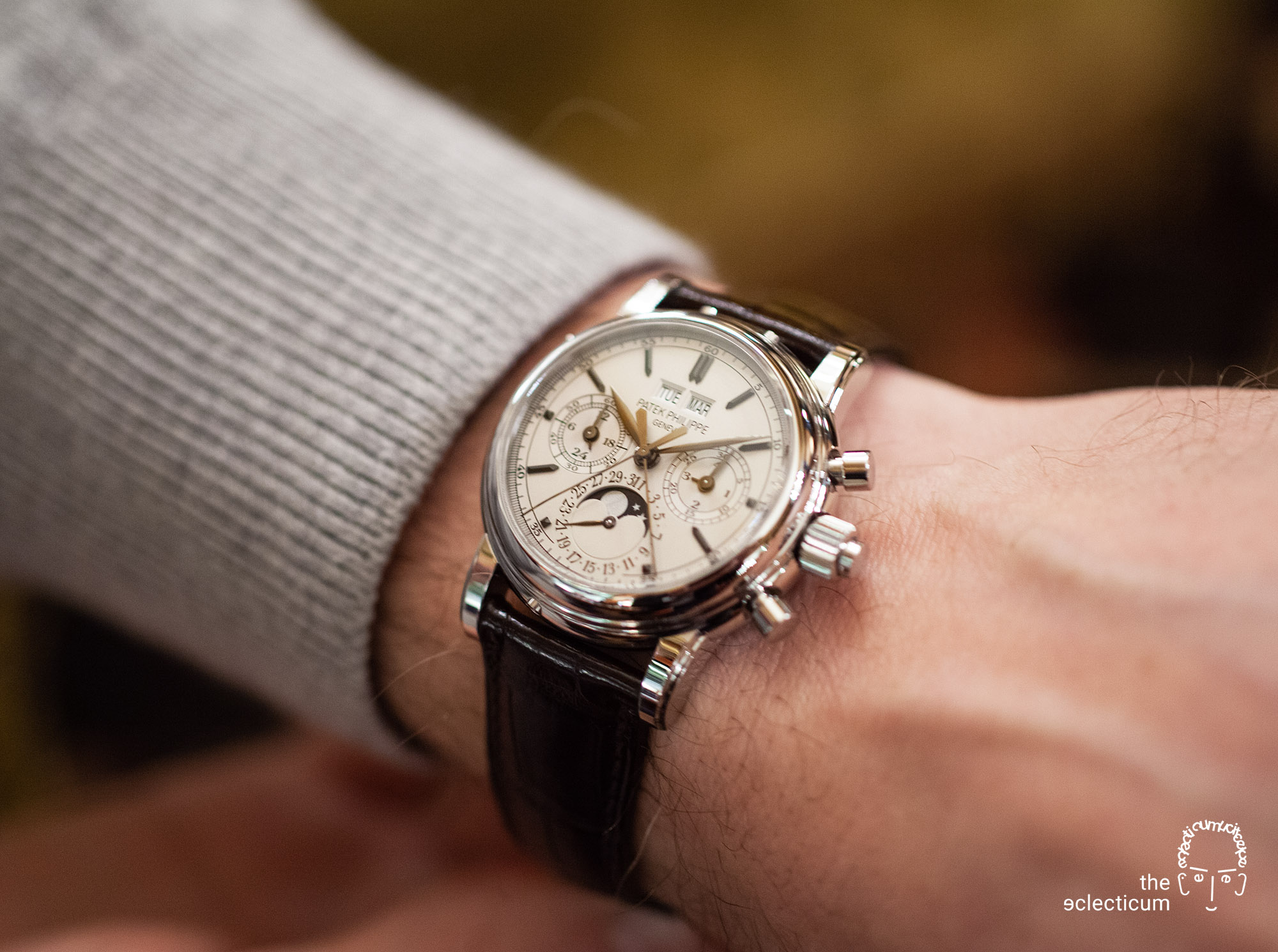 In its steel version the 5004A is an oxymoron of sorts: technically close to the very apex of Patek Philippe and housed in a case which makes it – in the context of its manufacturer! – one of the most elusive pieces, it yet has not (yet?) acquired the patina of ‘unobtainium’ one would expect. Wondrous, one might say, or simply enjoy what is on the wrist…