The Daniel Roth Double-Faced Tourbillon Ref. 187 has that heft, solidity and old-world charm – masterfully illustrated with photography by Ming Thein 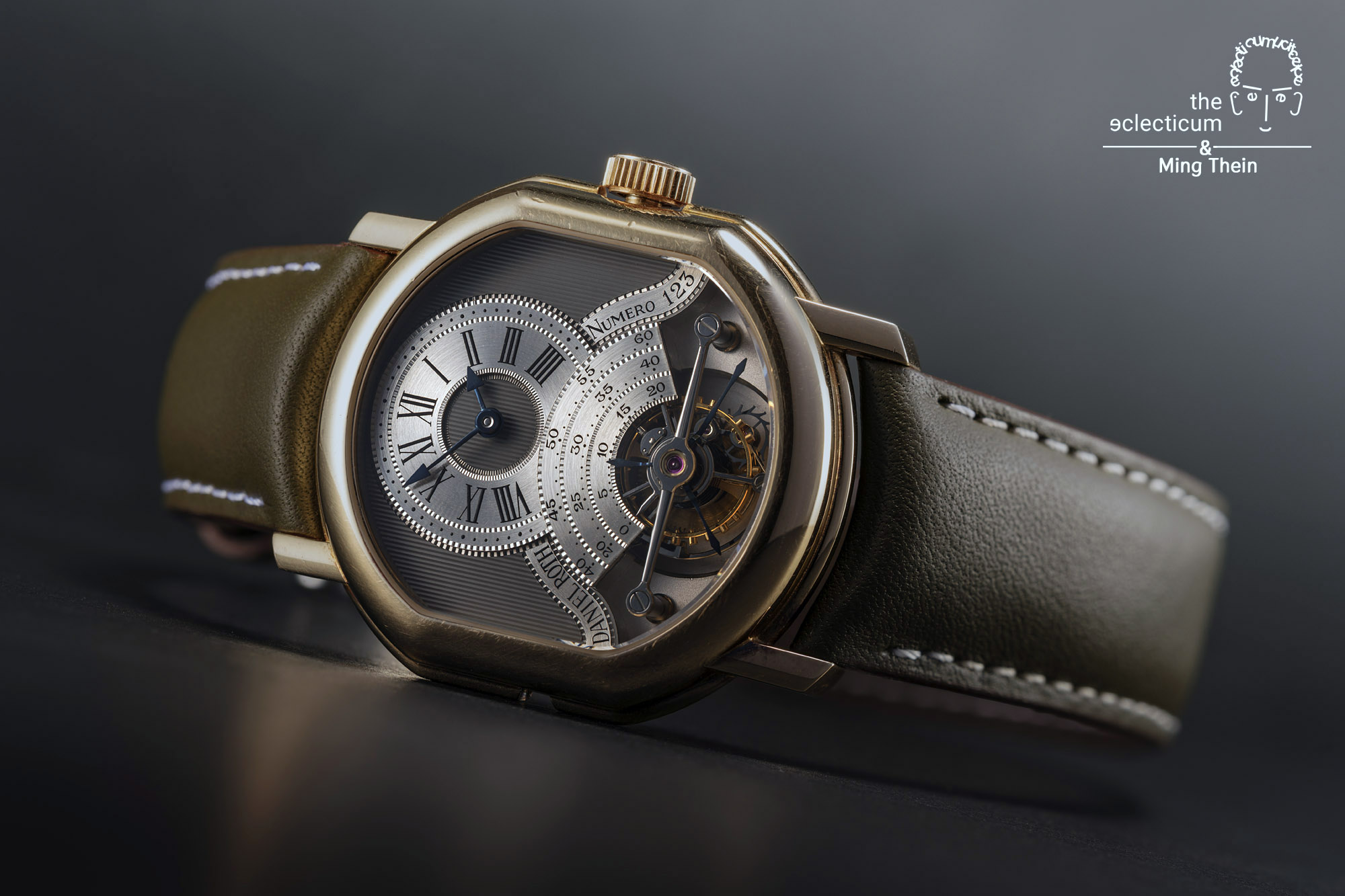 I have always been a fan of (almost) everything independent watchmaking legend Daniel Roth created. Iconic designs, idiosyncratic constructions, impeccable finish – ingredients which certainly helped to foster the legacy of Mr. Roth.

Mr. Roth has been one of those figures who shaped watchmaking industry in the last 5 decades – he was responsible to establish what modern Breguet still is today, defining the current design language, the distinctive case shapes and use of guilloché dials, and also developing a number of legendary movements which – at least in their essence – are still used by Breguet today, including their classic tourbillon calibre.

(The lovely Breguet Classique 3797PT Tourbillon Perpetual – built on Daniel Roth’s tourbillon movement) Eventually, he set up his eponymous brand shortly after he left his position at Breguet in 1987. Again, Daniel Roth’s aesthetic sense proved itself once more with an instantly recognisable case design – squaring the circle, or more precise, combining the most attractive from round and square watch cases – and again a distinctive guilloche pattern. 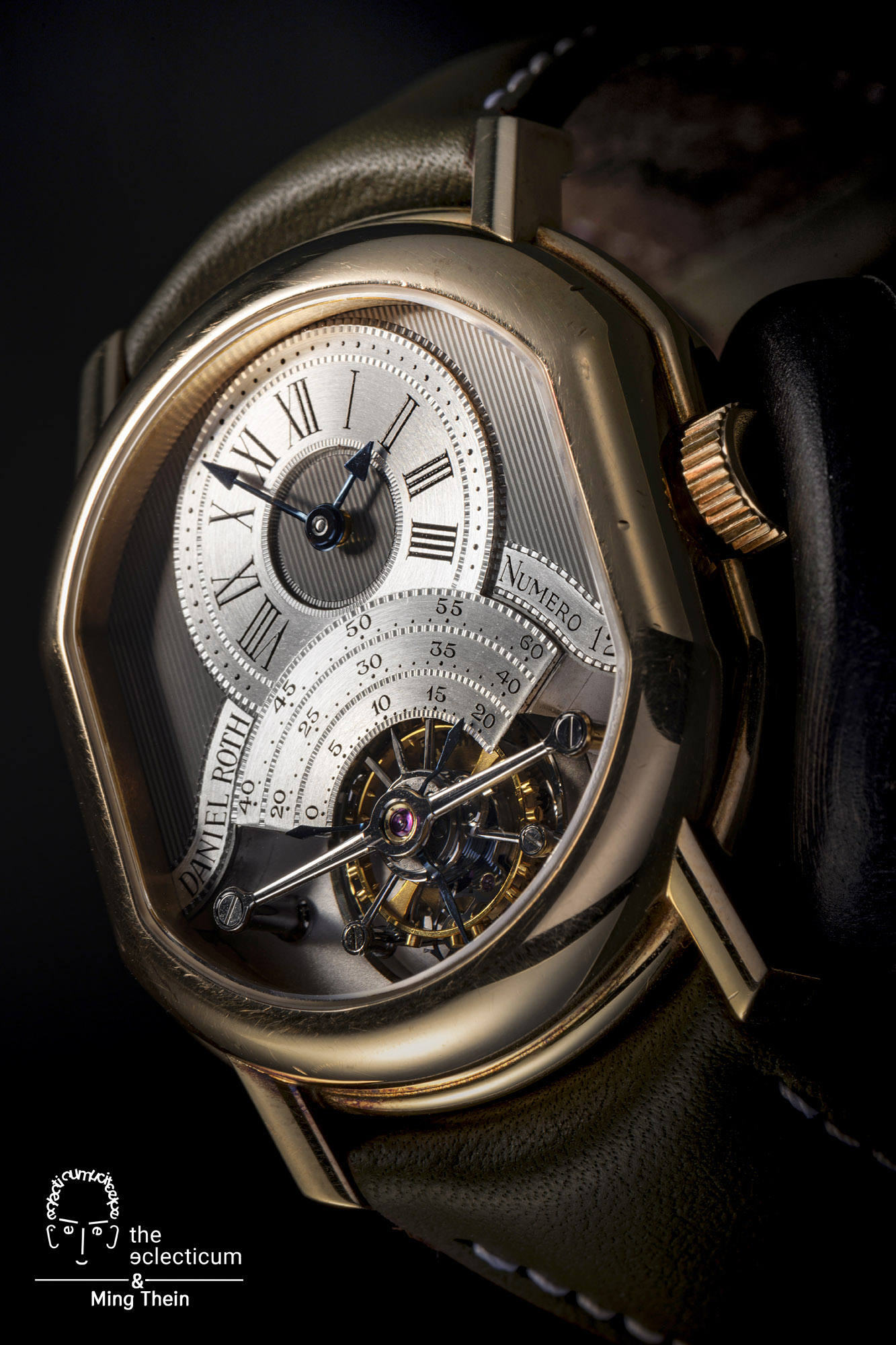 While leaving Breguet, Mr. Roth secured the express provision enabling him to continue using a number of Lemania movements – such as the base movement for the 1-minute tourbillon which he himself developed while still at Breguet. The movement then was used in a number of Daniel Roth timepieces, either in a conventional layout or, like in the case of the Daniel Roth Ref. 187 at hand, in double-faced configuration. 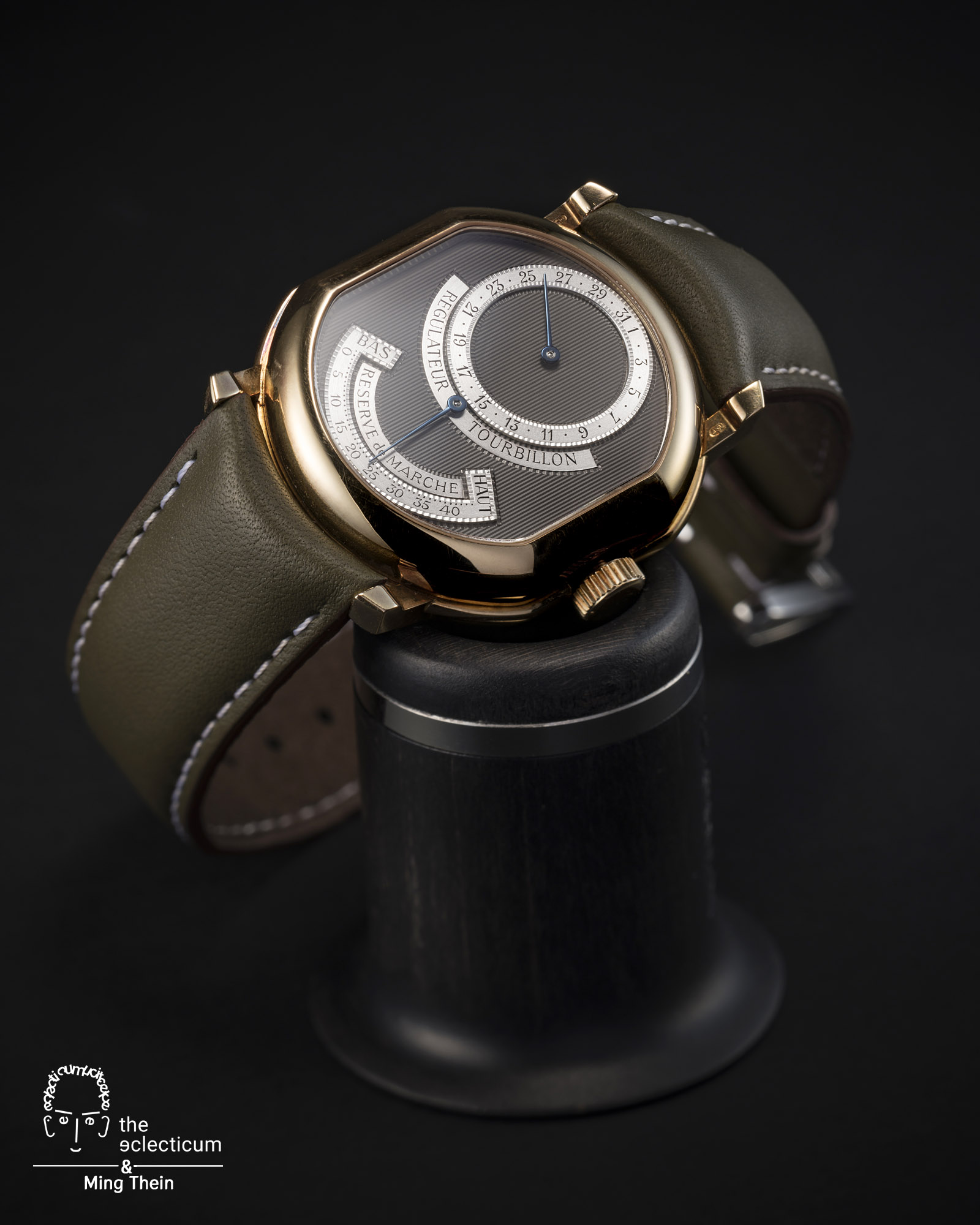 (Backside of the Daniel Roth Tourbillon Double-Face Ref. 187 – date and power reserve indications) The watch has a number of interesting tricks up on its sleeves – note the layout for example. Time display and tourbillon cage mark the north and the south poles, respectively, of the case (a positioning accentuated by the vertical dial guilloche), with the tourbillon cage residing on a lower level than the rest. 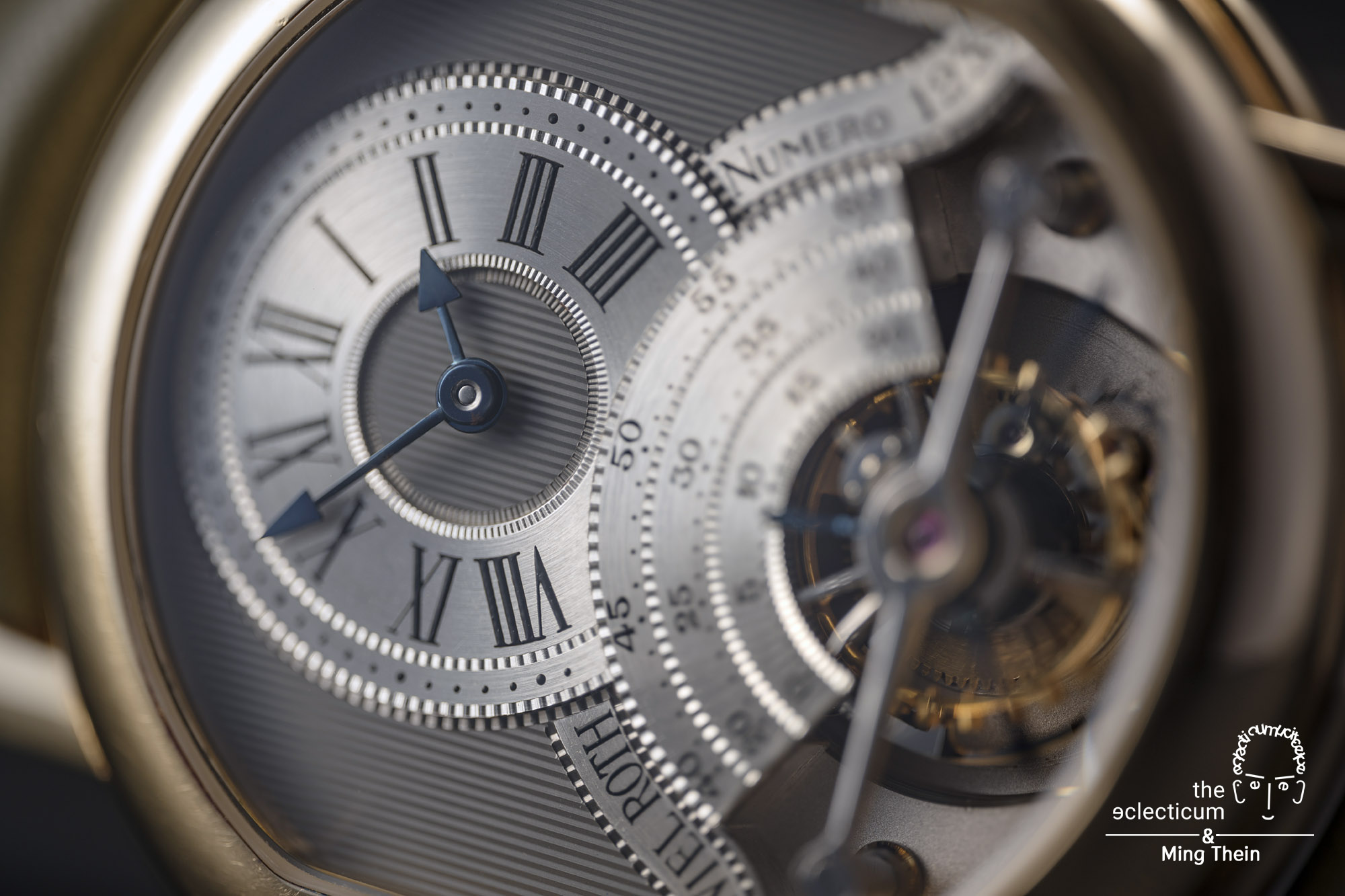 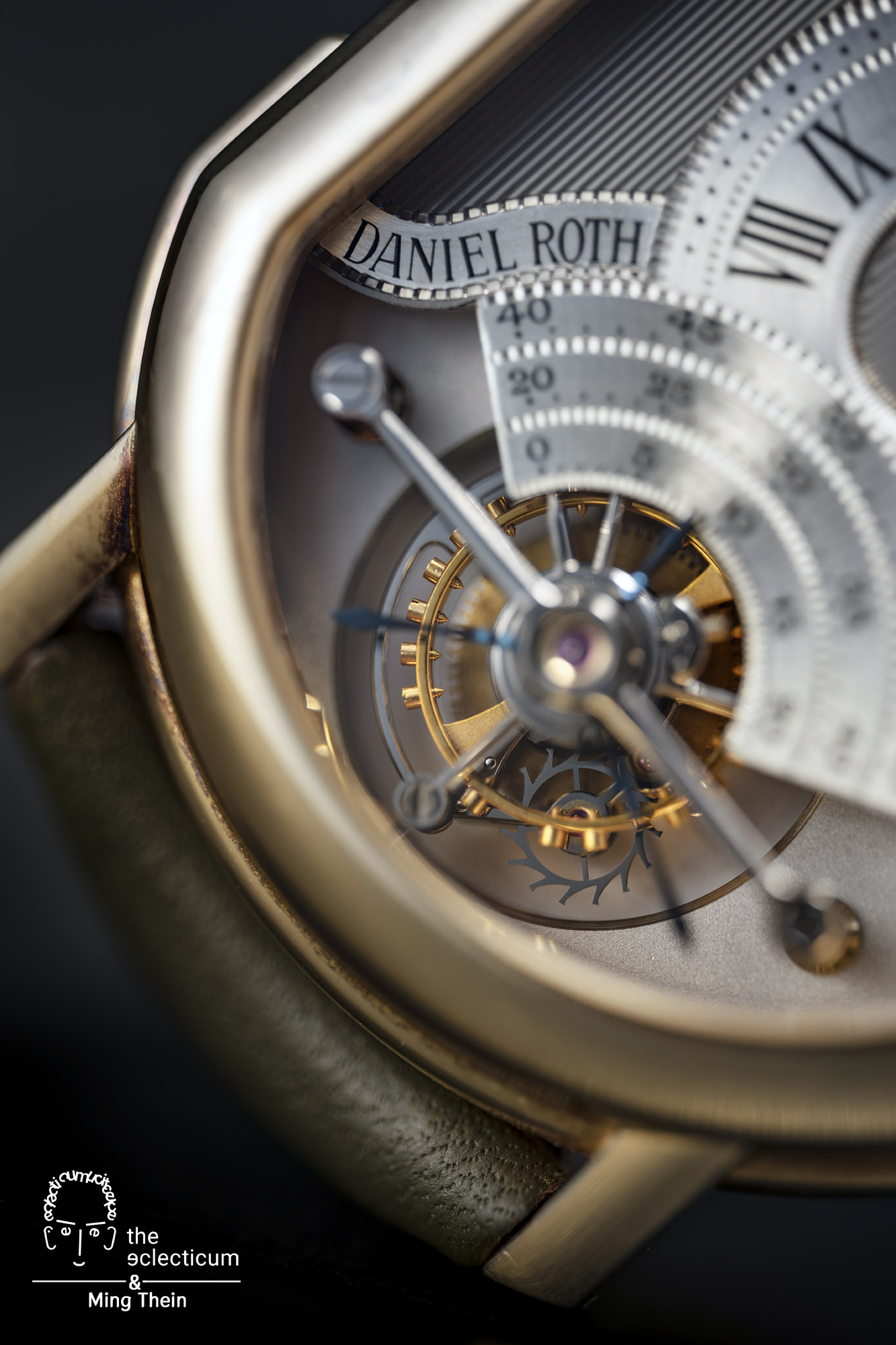 To mark the separation between the layers, and also between time-keeping and time-display functions, two ‘moustache’ elements, brushed and guilloched, are added, an idiosyncratic design feature Roth used repeatedly.

Likewise, the seconds display uses a lovely trick as well: the scale draws a 120° arch over the tourbillon, thus covering 20 seconds, or 1/3 of a minute. Three such scales thus accommodate one full tourbillon rotation, and Roth mounted a seconds hand with three arms of different length, one for each scale, for a complete seconds dial – with a twist. That such ensemble also optically counterbalances the time dial at 12 o’clock speaks for the thoughtful concept. 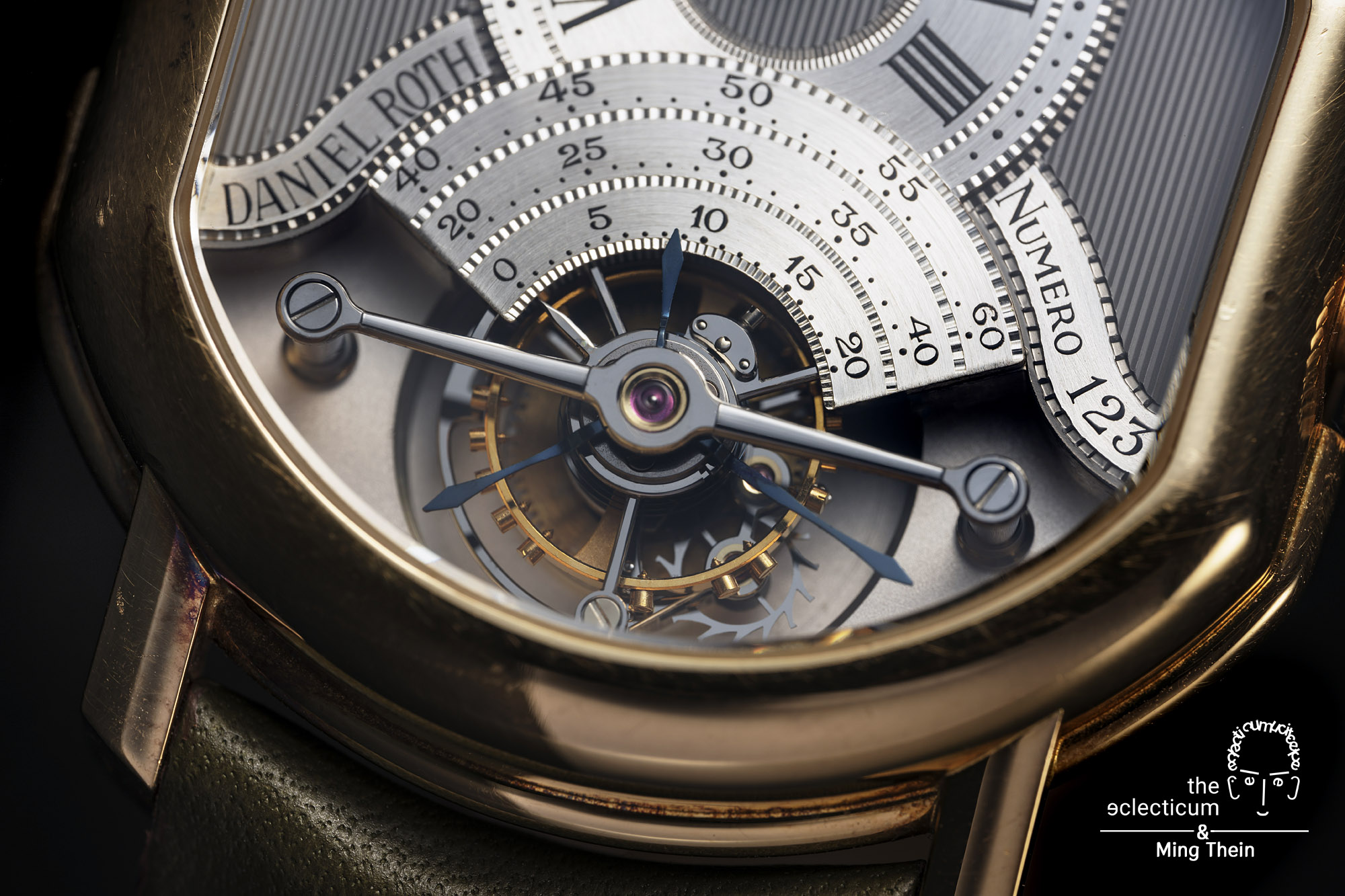 Daniel Roth’s Double-Face Tourbillon Ref. 187 is not only one of the most recognisable, original and timeless watches made by Roth, it is also a significant timepiece that carries great history with it – the one of an accomplished watchmaker earning his fame, becoming independent and developing his legacy.

It speaks of a time when independent watchmakers were just about at the start of gaining traction, a time when tourbillons were really rare, and of a time when computer-assisted tools were little used, especially by small brands or individual watchmakers. The watch speaks with design, volume and heft of past excellence, yet has lost nothing in attraction – till this day!

The watch in a way also offered a glimpse into the future, when Daniel Roth gained independence a second time with Jean Daniel Nicolas. But this would be another story… 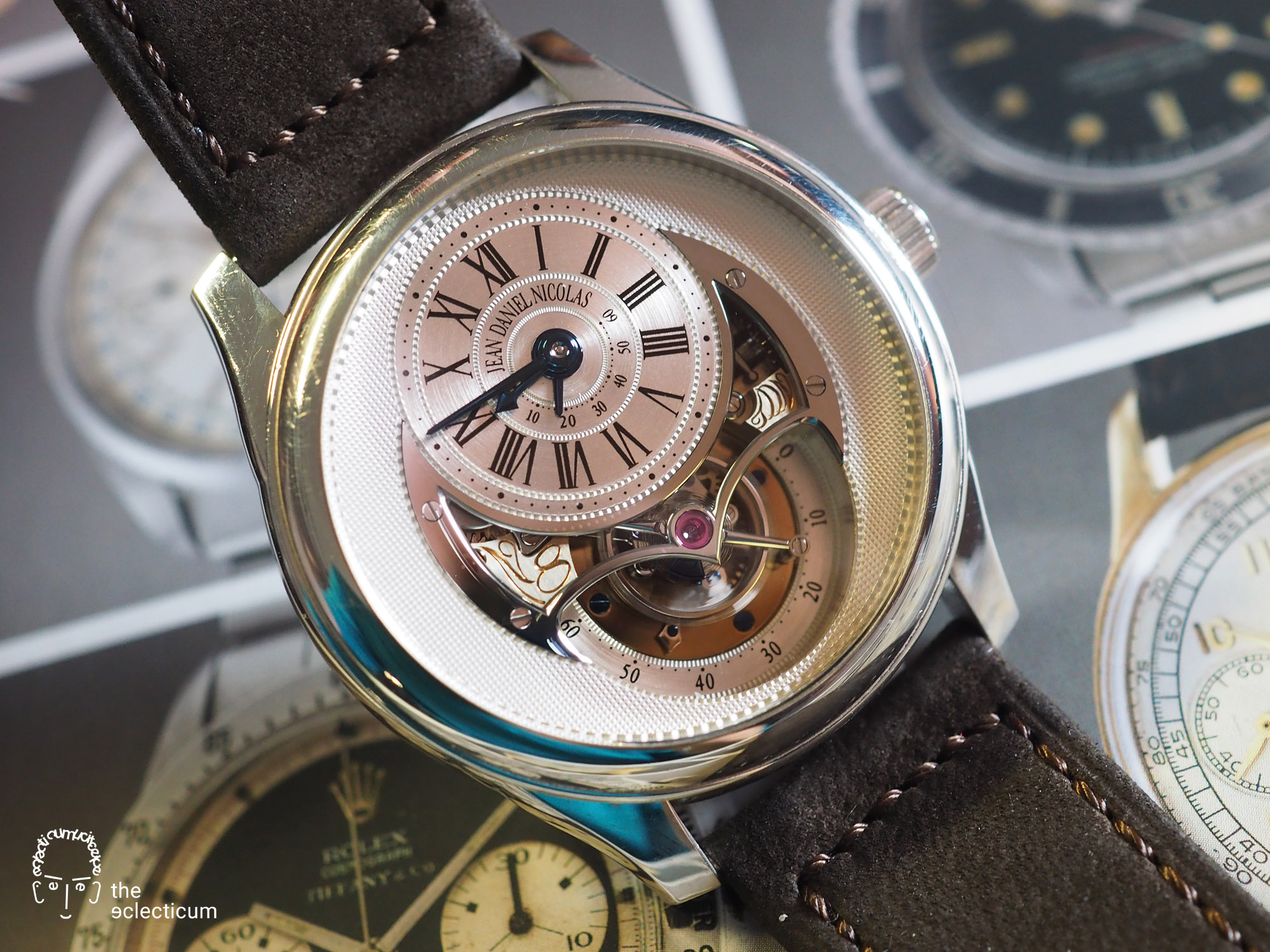 (The Jean Daniel Nicolas Two Minute Tourbillon) To sum up in the words of Ming Thein: “It’s as modern as you can get reliability-wise and still somehow feel vintage, and that overused word: artisanal.”

In one sentence: Daniel Roth’s Double-Face Tourbillon Ref. 187 is a must-have for the discerning collector keen on this kind of context!

Ornatus Mundi P.S.: the eclecticum would like to thank renowned photographer, designer and founder of the independent watch brand MING, Ming Thein, for sharing his outstanding images with us.