Certified: Ferdinand Berthoud backs up the chronometric performance of the FB 2RE.2 with independent data

The full name of the manufacture is Chronometrie Ferdinand Berthoud, a name that clearly signals a performance claim. All watches presented so far were always impressively constructed and beautifully designed, but only now the brand supplied comprehensive test data for the performance of its latest FB 2RE.2 chronometer sourced from timekeeping experiments executed by the independent Fleurier Quality Foundation, i.e. the standardised Fleuritest protocol. 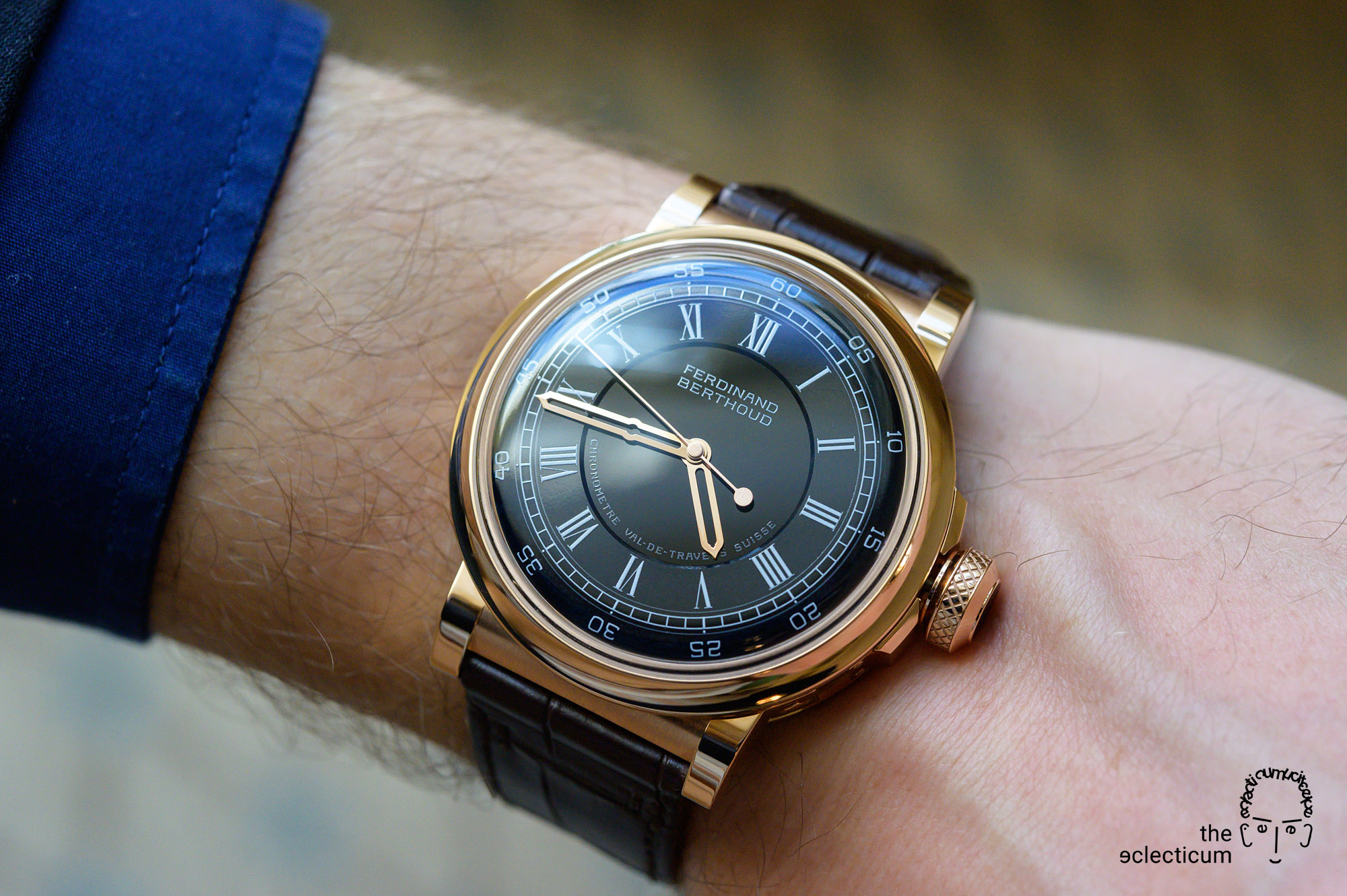 Before we delve into the timing results let me recap the construction of the movement driving the FB 2RE.2, the manufacture Cal. FB-RE.FC: 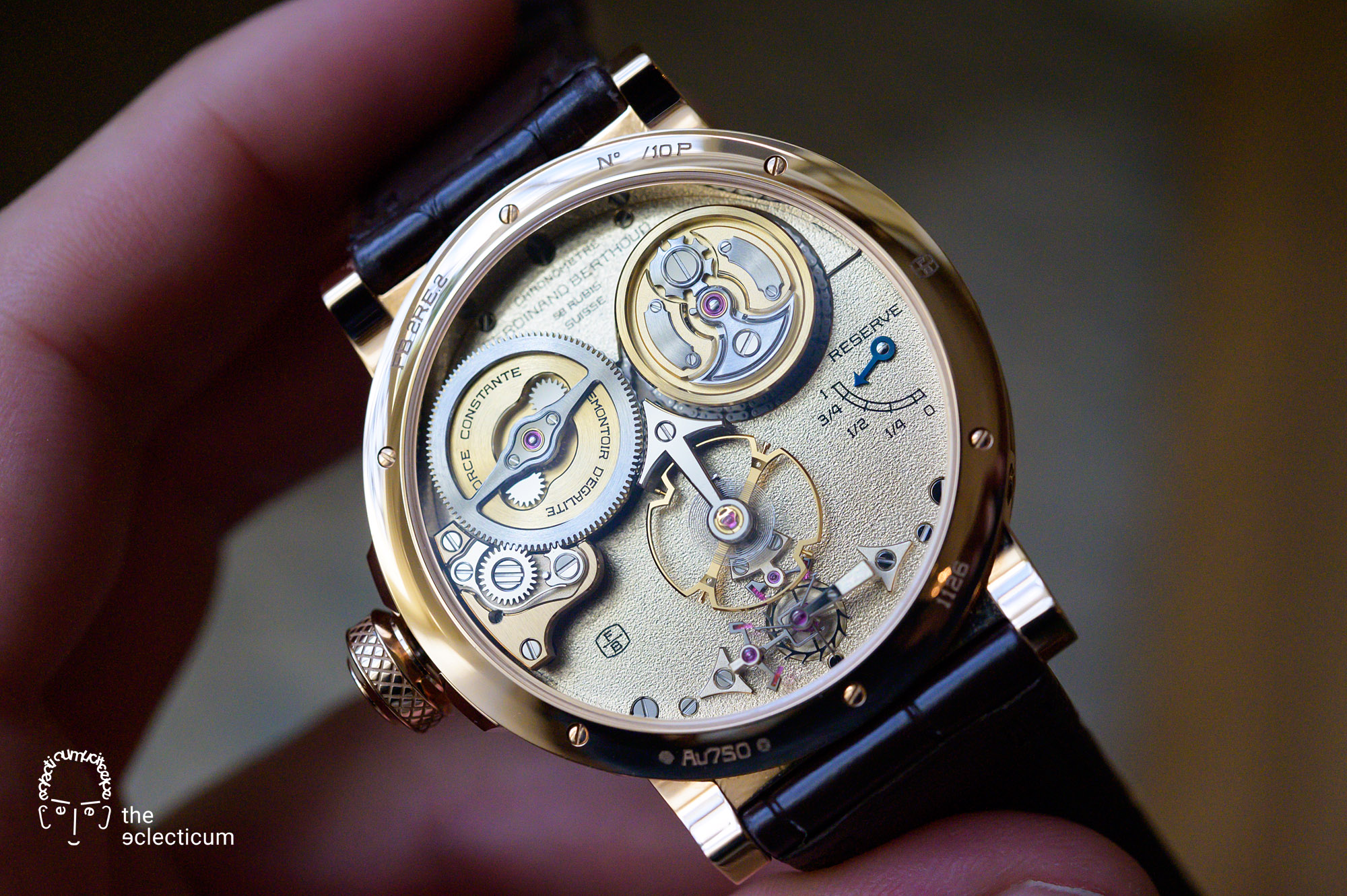 Rarely have I seen a movement so streamlined to timekeeping as this one (and quite honestly, timekeeping per se is of far lesser importance today for a watch than – perhaps, regrettably – its entertainment value – another discussion!), and likely also very few that present those constructional details that serve improved performance as openly as this one. In fact, that’s essentially all you see…

(Optimising isochronism along the entire geartrain. Image © Ferdinand Berthoud) The general construction of the Cal. FB-RE.FC comprises classical, finest performance-increasing details, and also the materials used are traditional ones – there is no silicon or nanotubes to be found. Specifically, the gear train is equipped with two major mechanism both intended to regulate energy flow, one at the source and one at the end of the geartrain: (1) Regulation of torque at the source: mainspring
The fusee-and-chain system, cherished by collectors for its ‘old-world’ charm recalling table and pocket chronometers, ensures that the torque fed from the mainspring barrel into the geartrain is constant regardless of its winding state. 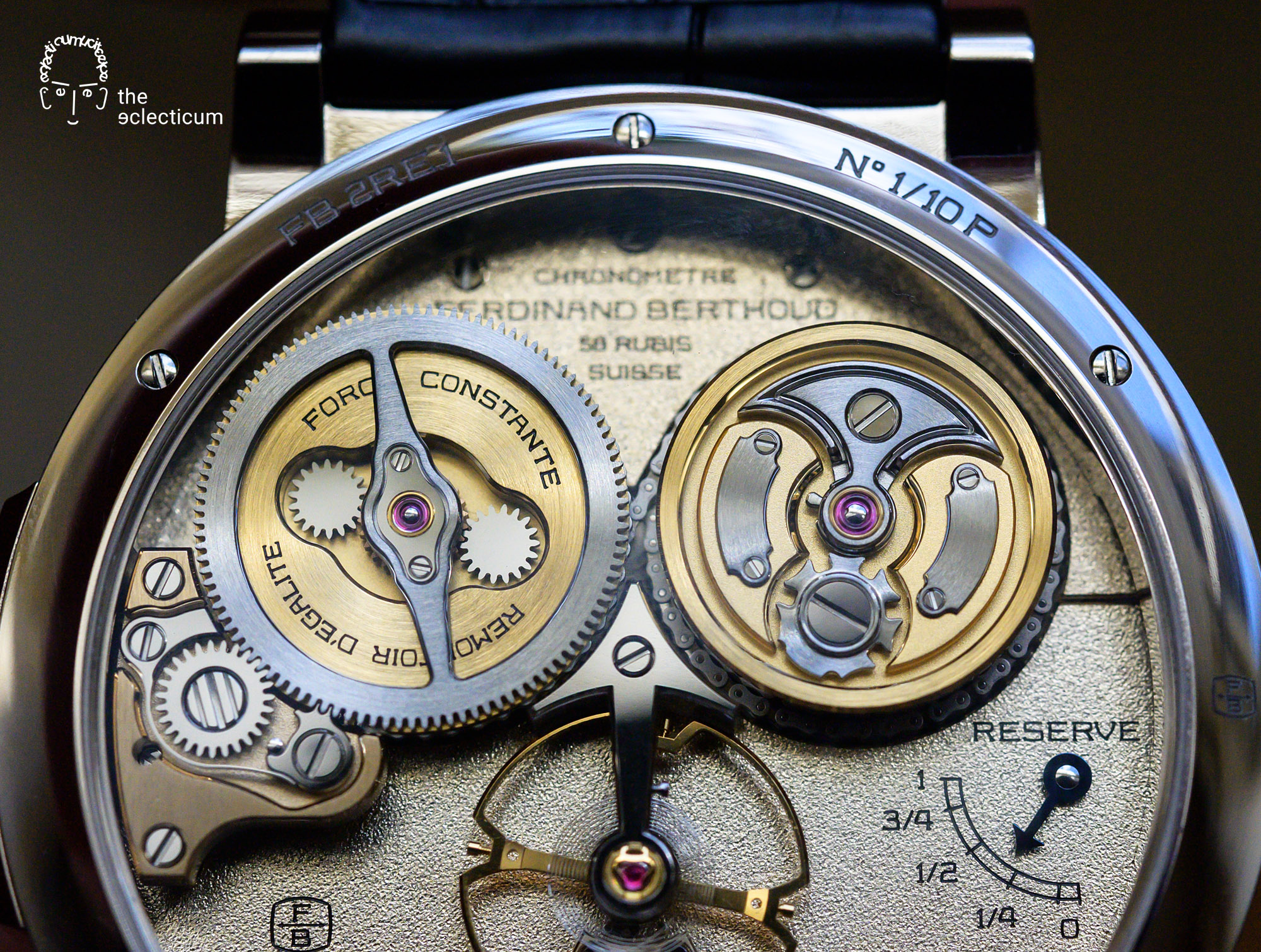 (Fusee-and-chain as well as Maltese Cross system) With this mechanism, the energy of the mainspring is transferred from the barrel (right, constant diameter) by means of a miniature chain to a conical fusee cone (left, variable diameter) such that the diminishing torque of the mainspring is compensation, i.e. offering a first means to improve isochronism. 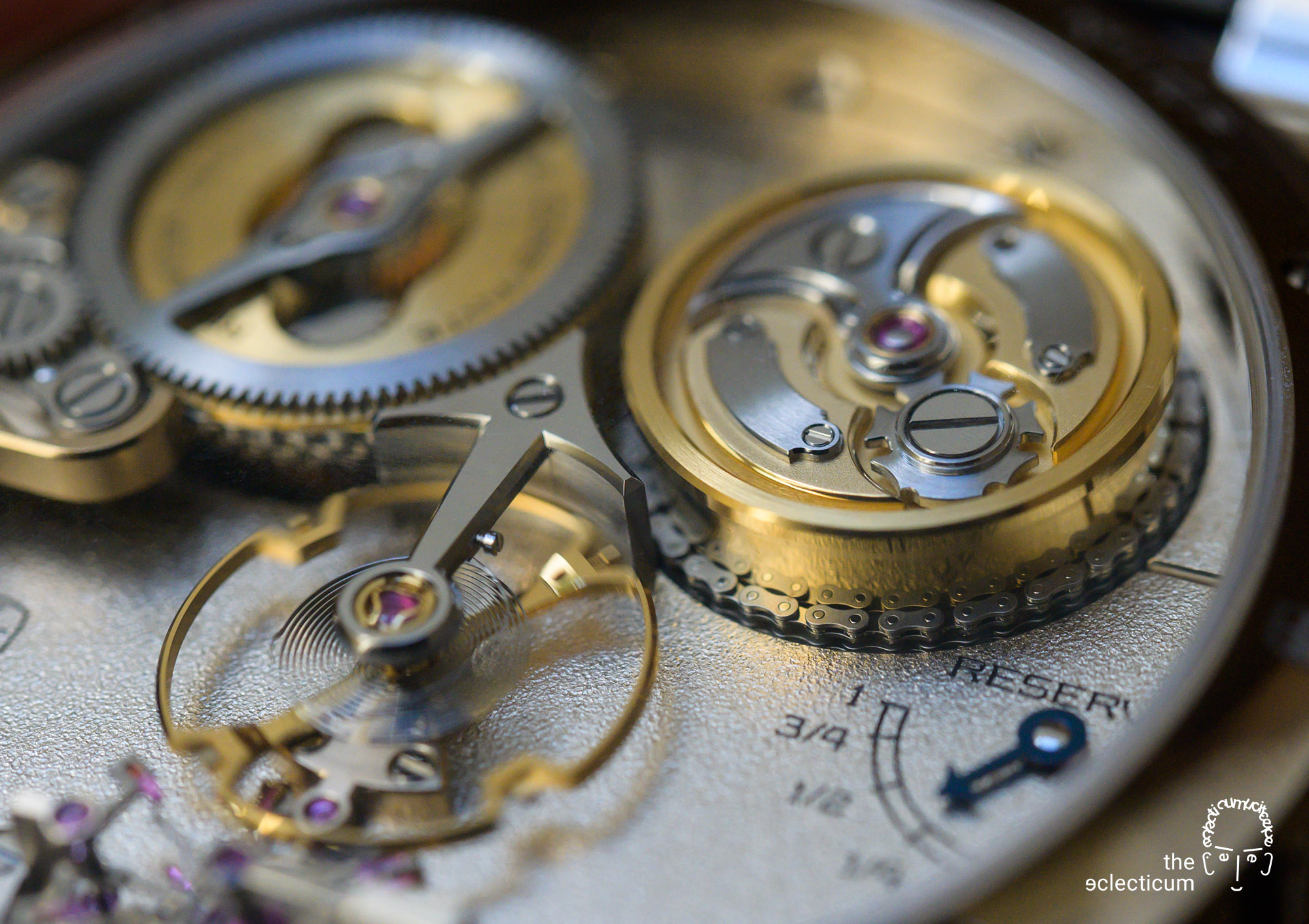 (Chain almost uncoiled from the barrel (front), and wrapped around the fusee (back))

(The FB 2RE.2 has a window on the case band to view the chain)

Ferdinand Berthoud goes one step further: in addition to using the fusee-and-chain to compensate torque drop of the mainspring, the watchmakers further added a Maltese Cross to limit the usable fraction of the mainspring: if not limited, the comparatively large mainspring would provide about 80h of autonomy. In practice only 60% (about 50 hours) of this energy is actually used. 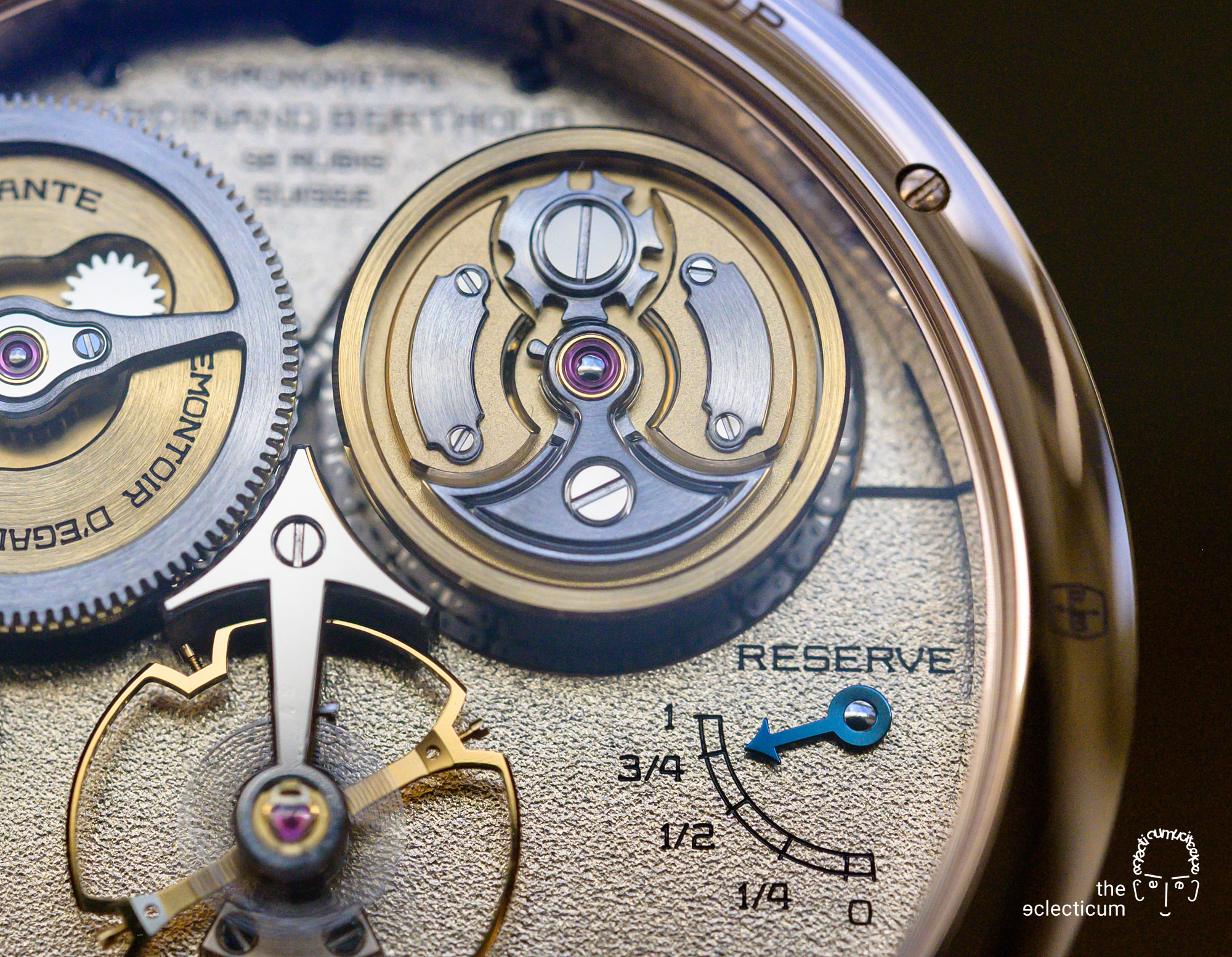 (Maltese Cross with the 6 fingers allowing for 6 barrel rotations, and the power reserve indicator below)

Of the original 8 possible rotations of the mainspring barrel the Maltese Cross allows for only 6, thereby preventing the spring from supplying too much (at the beginning of the power reserve) and too little energy (at the end of the power reserve). (2) Regulation of torque at the end: escapement
To further ensure that disturbances resulting from meshing of gear teeth or residual compromises to mainspring isochronism are minimised, the Cal. FB-RE.FC is equipped with a remontoir d’égalité, essentially an intermediate escapement coupled with a constant force spring which delivers precisely defined amounts of energy to the escapement proper. 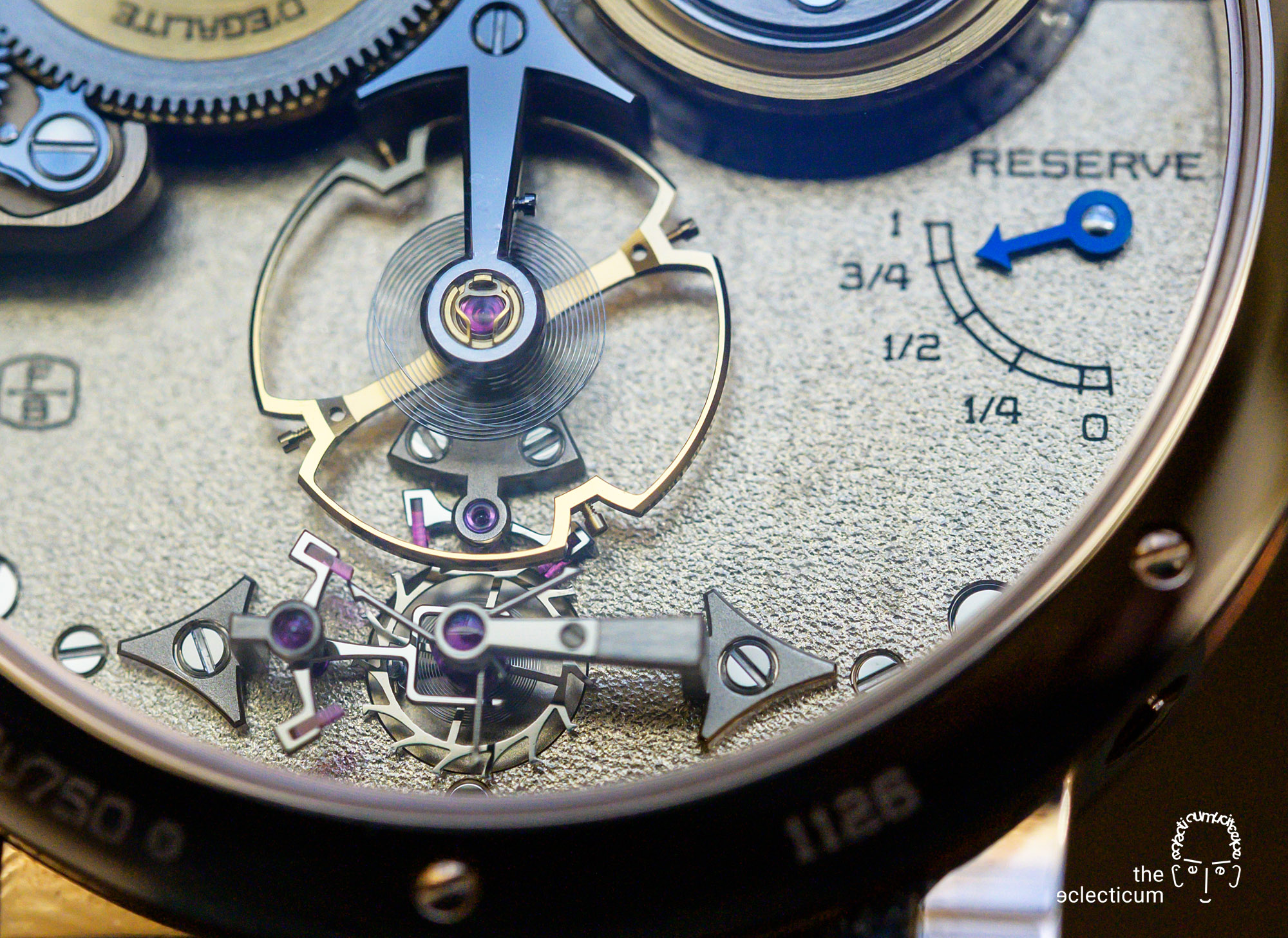 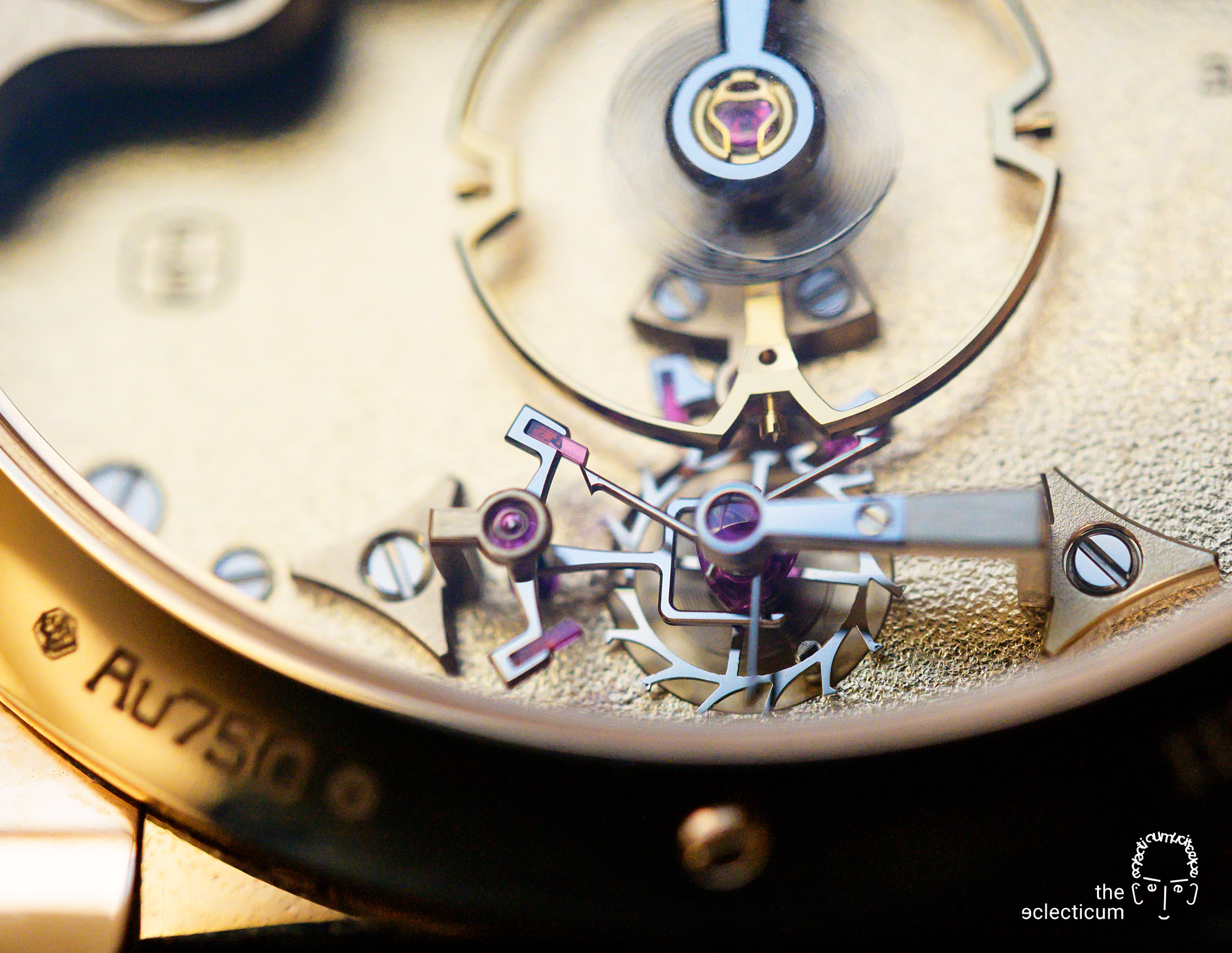 (The remontoir d’égalité. Note the fine spring beneath the escape wheel and the aerodynamic balance wheel (above), and the finely finished triple-shaft stop wheel (below))

“This remontoir d’égalité operates in conjunction with the escapement wheel. The latter’s rotation spans a 5-fold cycle, following the oscillations of the balance wheel. During the first 4 oscillations, the remontoire spring uncoils, releasing constant energy. 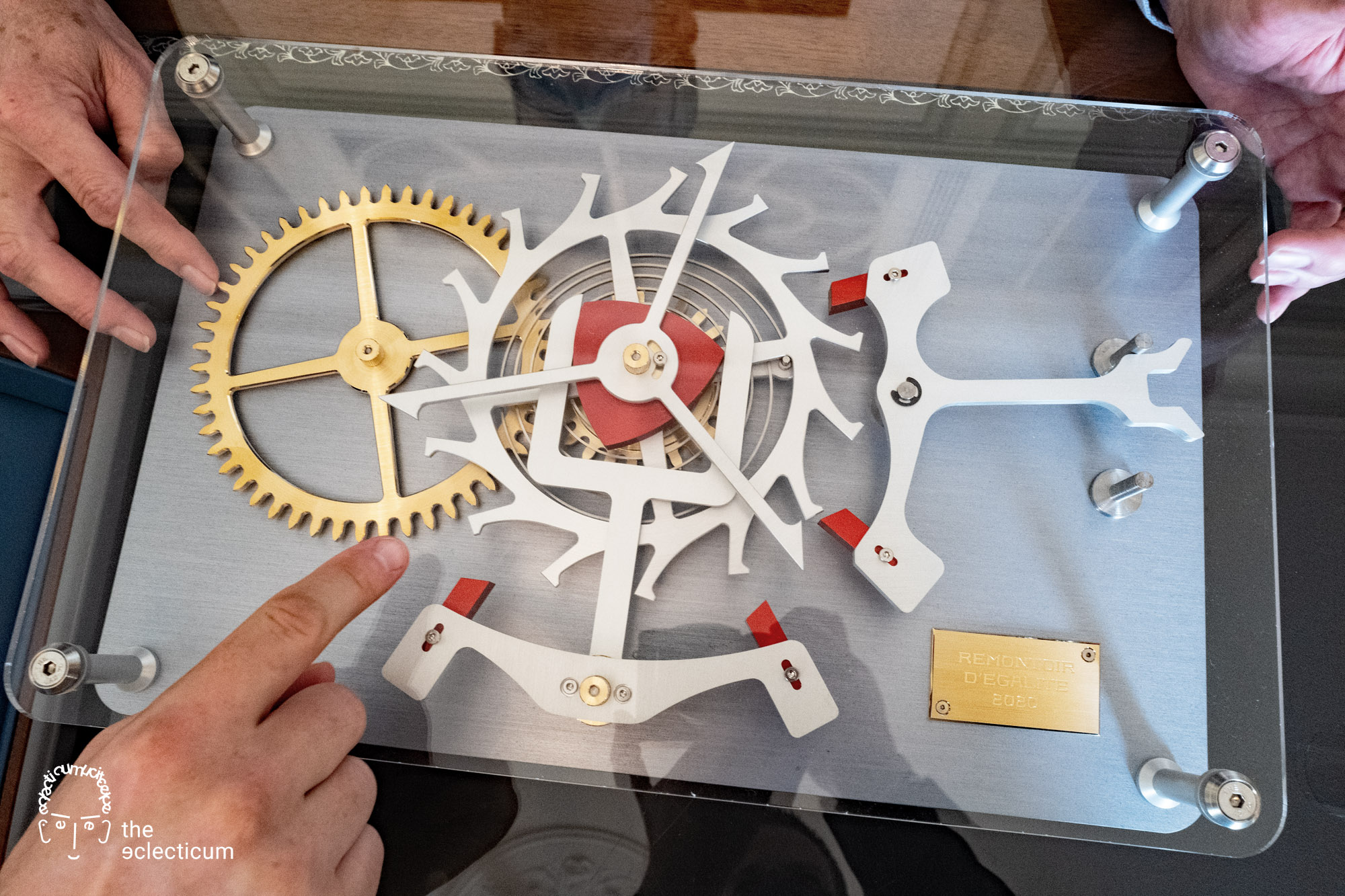 On the 5th oscillation, the triple-shaft stop wheel, which previously prevented the mechanism from coiling back up, is released, allowing the movement to rewind the remontoire spring, which once again begins to release a constant amount of energy for the next 4 oscillations, and so on. The entire cycle lasts one second.”

Overall, a very comprehensive account for the issue of constant torque in a classical watch movement.

Let’s see how it performs!

To ascertain the performance of the FB 2RE.2, Ferdinand Berthoud compared it to ‘a conventional mechanical movement’ using the conditions set forth by the Fleuritest cycle (see further below). Both rate as well as balance amplitude were checked along the entire power reserve of the two respective movements, and the results are quite impressive to say the least:

(Graph 2: rate cal. FB-RE.FC (blue) vs conventional movement (red). Image © Ferdinand Berthoud) What we see here is an average amplitude of 301°, changing only by about 2° over the entire autonomy (graph 1), impressively attesting to the equalisation of torque at the escapement, and a resulting nicely constant ratediverging by less than 0.5 seconds on average from the benchmark GPS clock optical measurement (graph 2).

A few caveats though:

This is not exactly ‘apples to apples’ but it is still a reasonably valid comparison to an industry standard, or better: industry mainstream. It’s the results which count, and those are, again, impressive.

As mentioned above, the results were obtained using the Fleuritest Chronometry Cycle, executed by the Fleurier Quality Foundation. Fleuritest requires that a COSC certification is obtained first, and that the movements are subsequently encased.

Side note: The Fleuritest Chronometry Cycle (as per Fleuritest website)

The watch, in its final form, undergoes a last test on the Fleuritest simulator. A 24-hour operating test is conducted on the robotics simulator, which recreates the movements of a nycthemeral cycle, alternating between active or extremely active phases and calmer ones. Variations in rate are analysed by means of an artificial vision system using digital cameras. 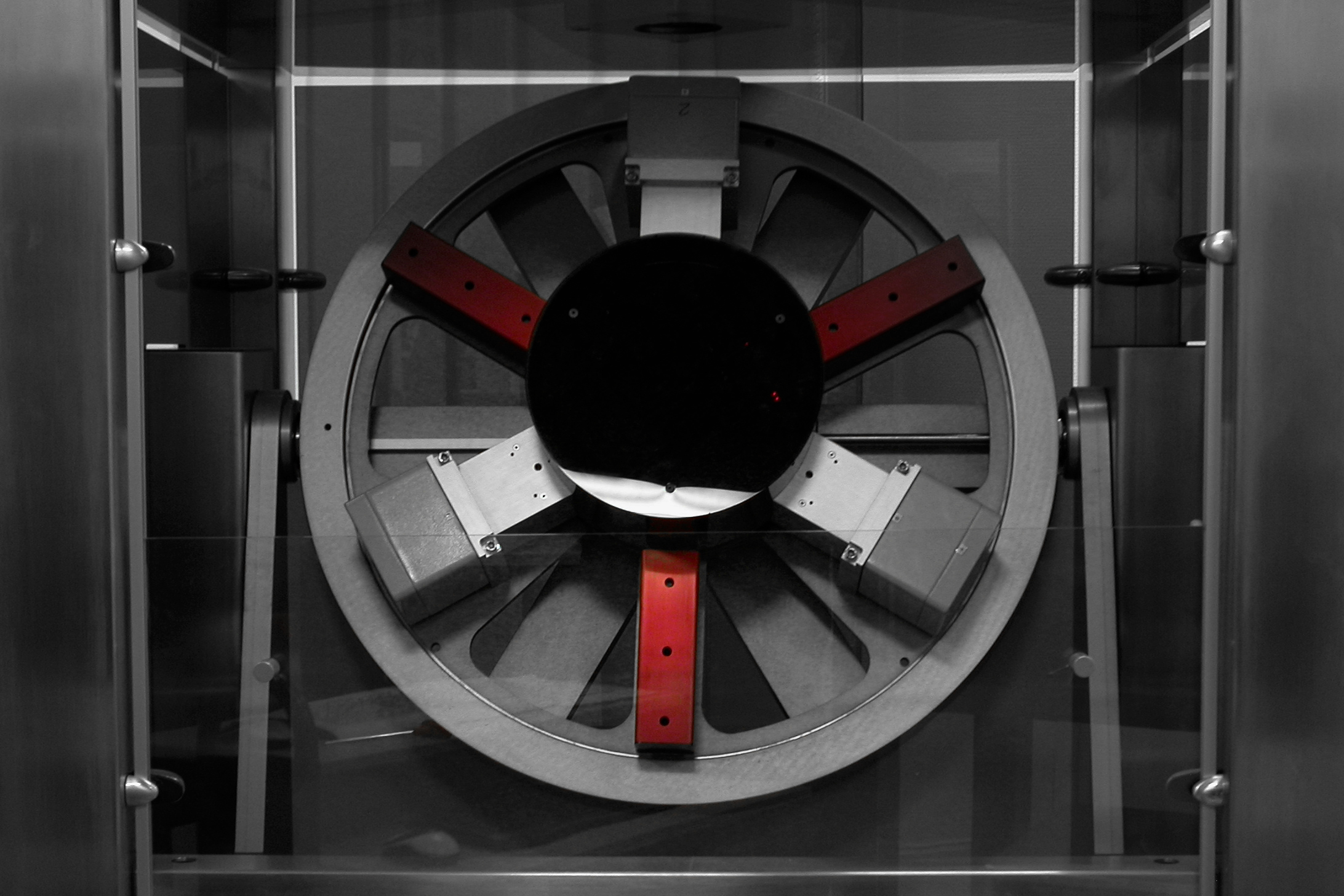 (The Fleuritest simulator. Image © Fleurier Quality Foundation) Fully computer controlled and synchronized by GPS, the machine observes the time as will the future wearer but with greater acuity. The precision of the watch must fall within the range of 0 to +5 seconds per day.

At the end of the test, if the watch has passed, a “FQF, La Haute Horlogerie certifiée” certificate is issued for each watch, specifying the individual number on the movement and the case.

Below please find the actual Fleuritest performance protocol for the FB-RE.FC, using watch with serial number FB 2RE.2 N°2/10, which is the black dialed one here in the images: 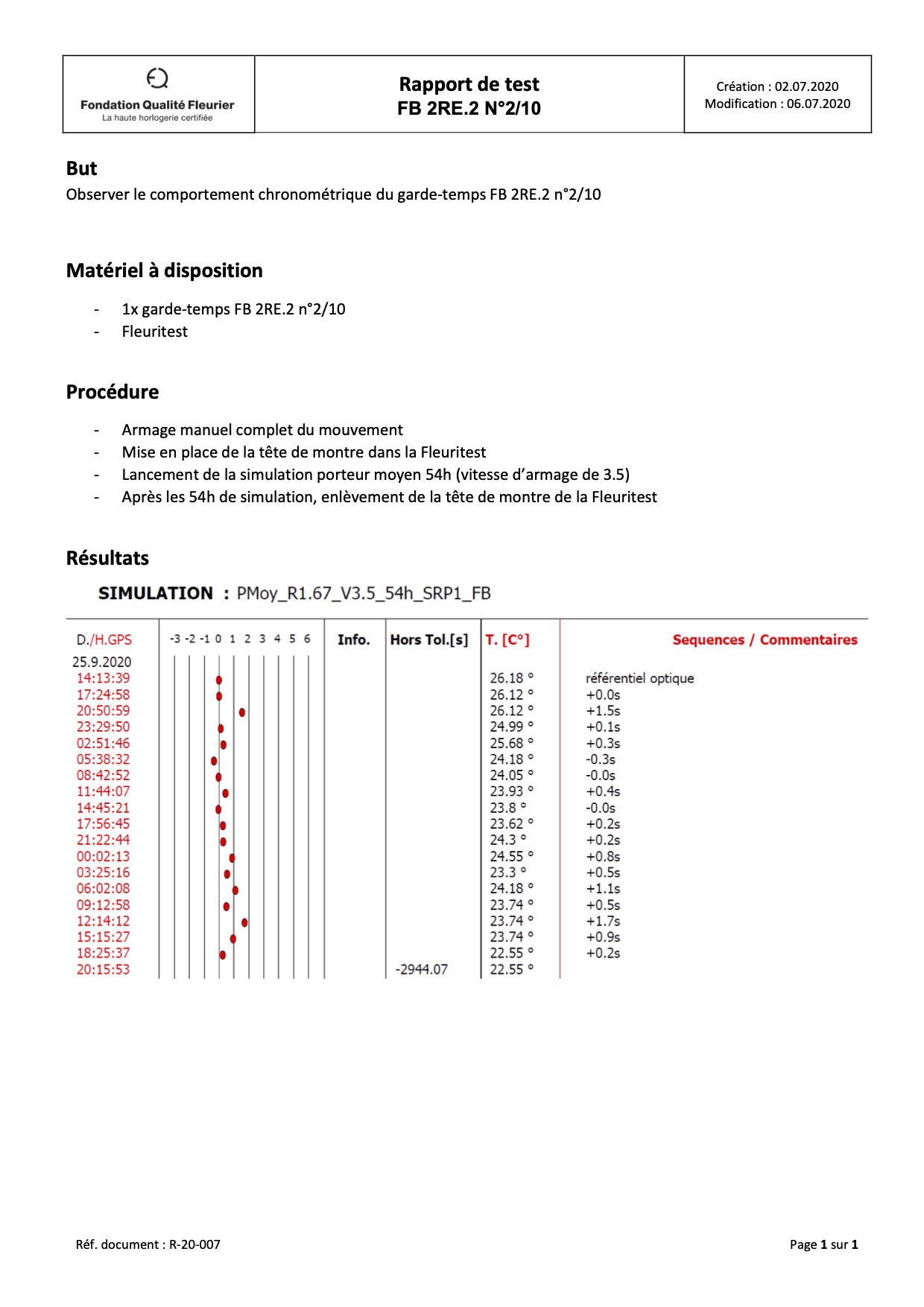 (Fleuritest protocol. Image © Ferdinand Berthoud) At this point all we see are the net effects of a number of factors, i.e. the constant torque provided by the mainspring (fusee-and-chain; Maltese Cross) as well as the constant torque delivered to the escapement (remontoir d’égalité; precisely adjusted and regulated escapement). It is impossible to assign the results to specific construction details/mechanism in this movements, as we don’t data on how one of the above described mechanism specifically contributes to timekeeping.

It would be expected that if the Maltese Cross would not limit the usable range of the mainspring both rate as well as amplitude would look more diverse at both ends of the (full) power reserve of the FB-RE.FC as well – and this is what the Maltese Cross is designed to prevent.

If we look at the ‘comparator movement’ and would hypothetically limit its usable power reserve to the same extend as the Maltese Cross limits the Ferdinand Berthoud, i.e. to 25h, it actually shows quite remarkable results (as far as rate is concerned). This indicates to me that optimising for isochronism at source has a main effect on rate (less to on amplitude, as the respective data for the ‘conventional’ movement in graph 1 shows), with the remontoir further improving albeit with diminishing returns (but this is where the real quest for excellence sets in!).

A fascinating exercise, and kudos go to Ferdinand Berthoud to sharing the test results!

When theory and practice align along the entire autonomy

What I just have reported here is actually a purists dream: a thoroughbred performance engine, compared to an industry mainstream, using an official certification protocol and independent testing body.

First, I just appreciate if companies not only make claims to the alleged ‘superior performance’ of a timekeeping mechanism, but also actually back it up in a reproducible way – all too rare these days, unfortunately.

The performance that are recorded for the Cal. FB-RE.FC ticking inside Ferdinand Berthoud’s newest watch, the FB 2RE.2, are indeed impressive, and if you take both amplitude and rate together attest (or better, at least hint) to the synergistic effects of the mechanisms set into the geartrain of the movement. 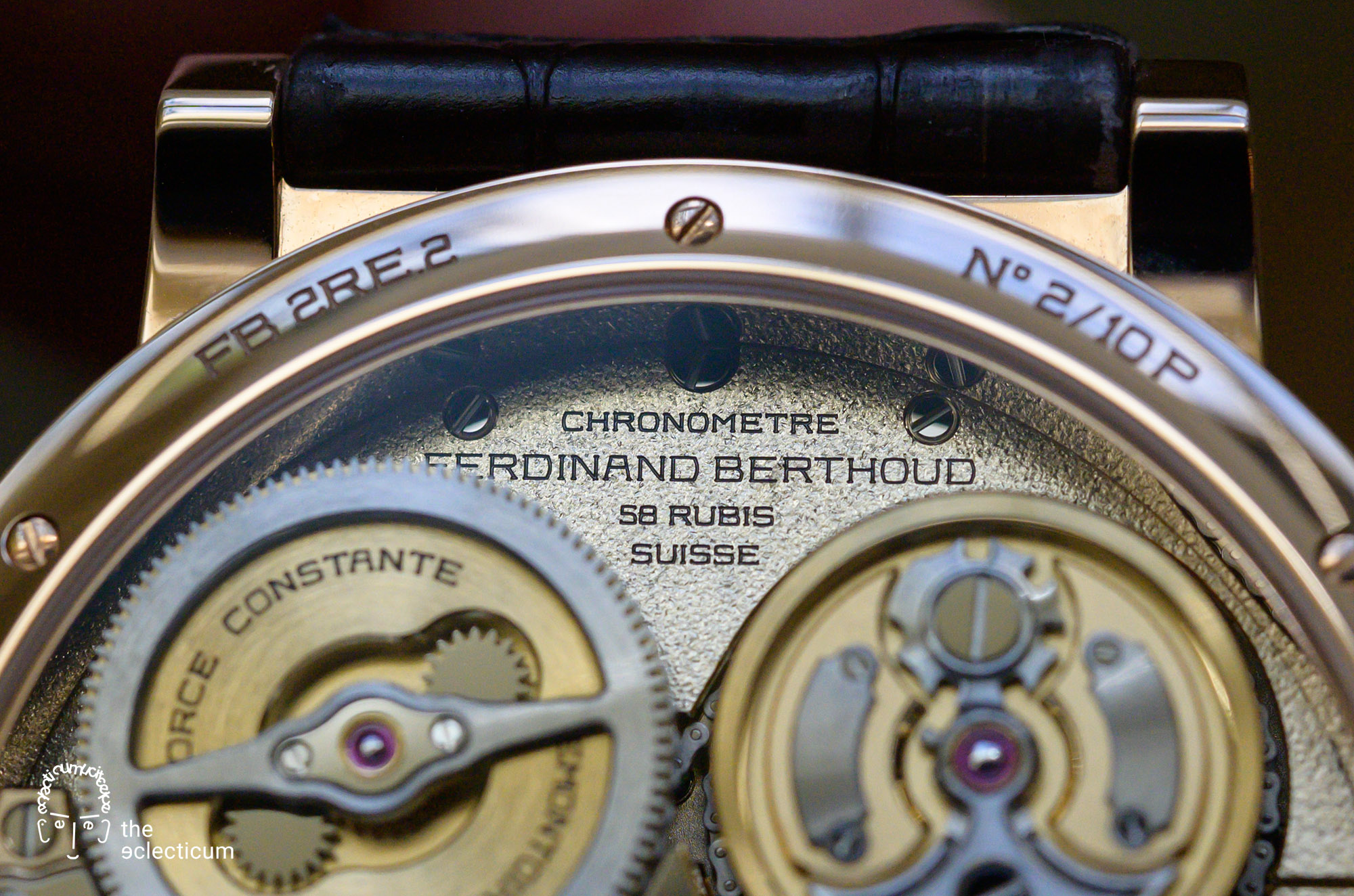 (Ferdinand Berthoud lives up to its full company name) With all the shortcomings mentioned above, I am impressed. I would be even more impressed if more such chronometry tests would be undertaken, comparing the industry’s best of the best in a neutral surrounding. This would substantiate (or refute) the claims widely made. Comparisons with e.g. the Zenith Oscillator (as it´s most modern counterpoint) would be immensely instructive, representing such developments the polar opposite of the decidedly traditional Ferdinand Berthoud. How about Greubel Forsey, FP Journe or the newest Bernhard Lederer?

Heck, I would make it mandatory for all watches to be submitted to the ‘Chronometry’ category of the Grand Prix d’Horlogerie de Genève (GPHG) to be accompanied by such chronometry data (a notion we vehemently share with the ‘Quill&Pad jury‘)! 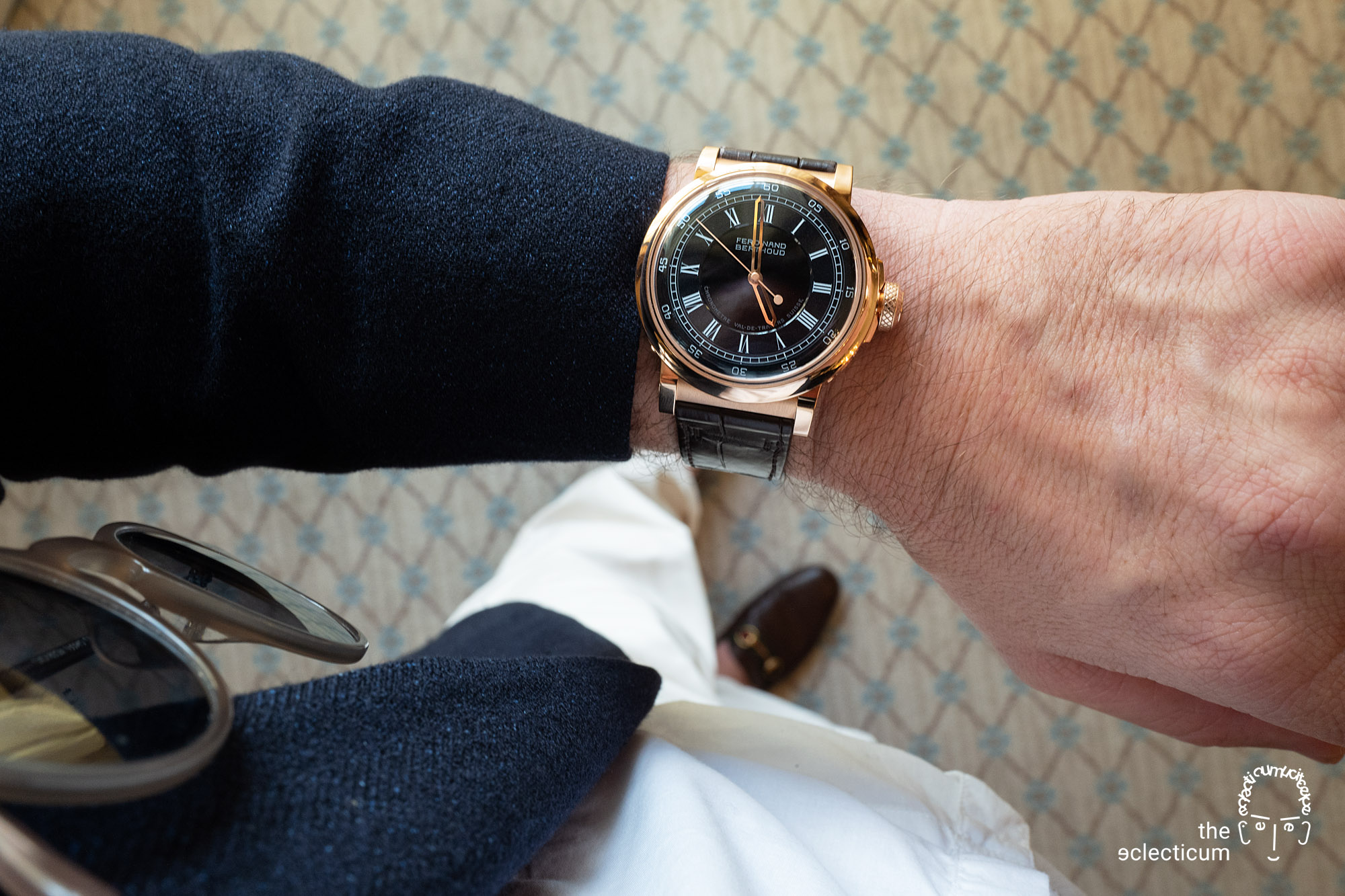 This, I fear would have a long way ahead. Until then we can enjoy the Ferdinand Berthoud FB 2RE.2, knowing that this particular timepiece is a holistic package which delivers as promise – its not without reason this watch is a favourite of the eclecticum for the GPHG 2020 Chronometry category.

The purists among us are delighted!