When Zenith and the auction house Phillips thought how best to revive the few of the sacred Cal. 135-O observatory-grade chronometer movements one name came to mind: Kari Voutilainen - enter the Calibre 135 Observatoire Limited Edition The project ‘Zenith Calibre 135 Observatoire Limited Edition’ made the headlights a few days ago within the watch collector’s community, not unsurprisingly. Its a milestone movement, with one of the greatest masters involved, extremely limted and at an ‘astronomic’ price… so what to make of it?

We share the information from the press release first and at the end offer our own thoughts. 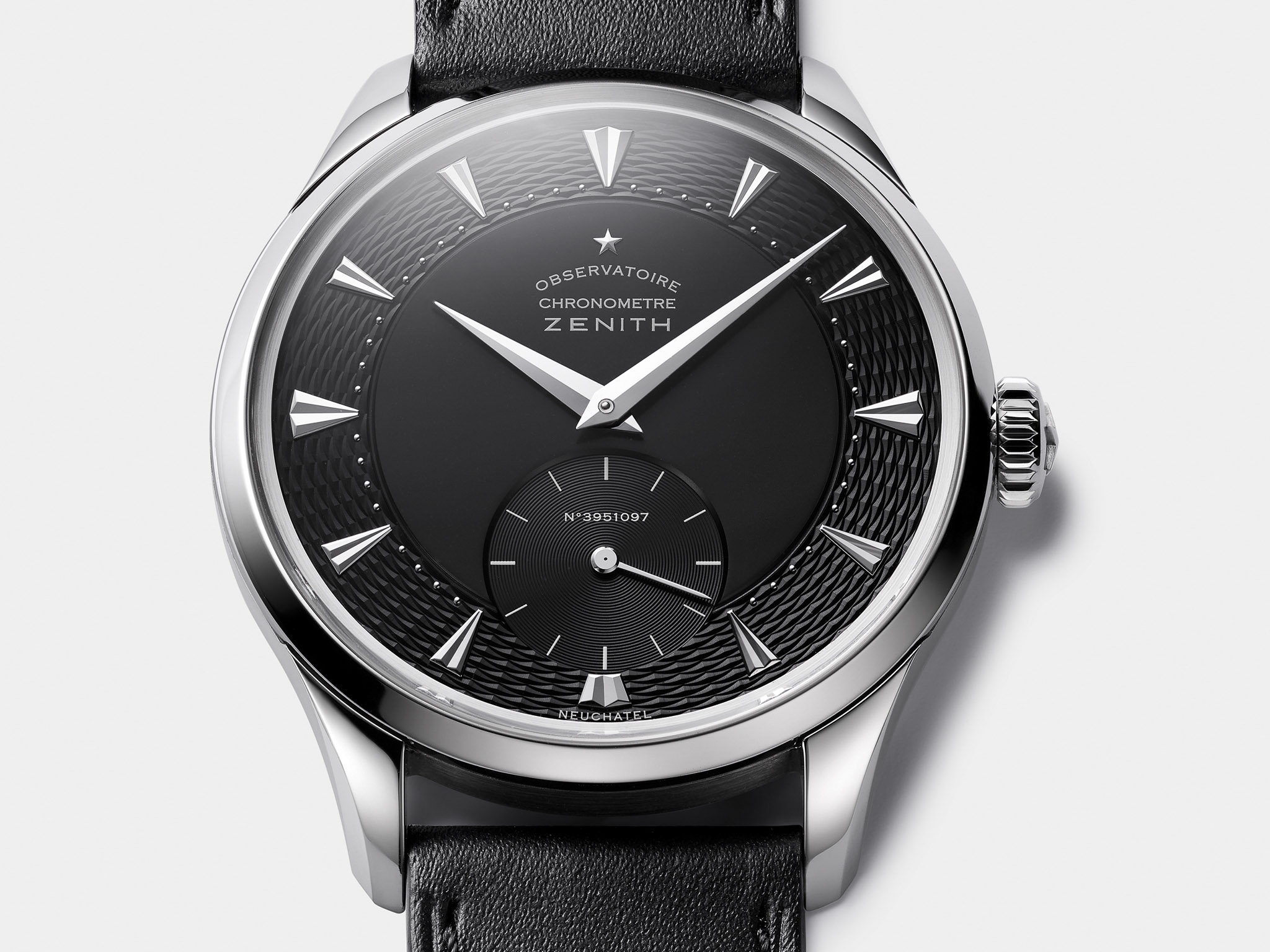 In a privatized cinema in Geneva, guests were invited to journey back in time to the 1950s and back with the premiere of a short film that recounts the tale of this extraordinary collaboration. The story begins during the last great decade of observatory chronometer competitions, an era of watchmaking that’s brimming with creativity and the pursuit of chronometric perfection. It is during this decade that ZENITH solidified its reputation as a preeminent maker of precision chronometers with the Calibre 135-0, the most highly awarded observatory chronometer ever made. Seven decades later, Phillips auction house, whose expertise in the field of rare and sought-after vintage pieces of historical significance as well as modern artisanal watchmaking is unmatched, proposes a new kind of challenge for ZENITH: To work with one of the most highly esteemed living independent watchmakers in order to restore and decorate a handful of Calibre 135-O movements that actually took part in and won observatory chronometer competitions, and to house them in a totally new watch that is at once historically inspired and contemporarily singular. 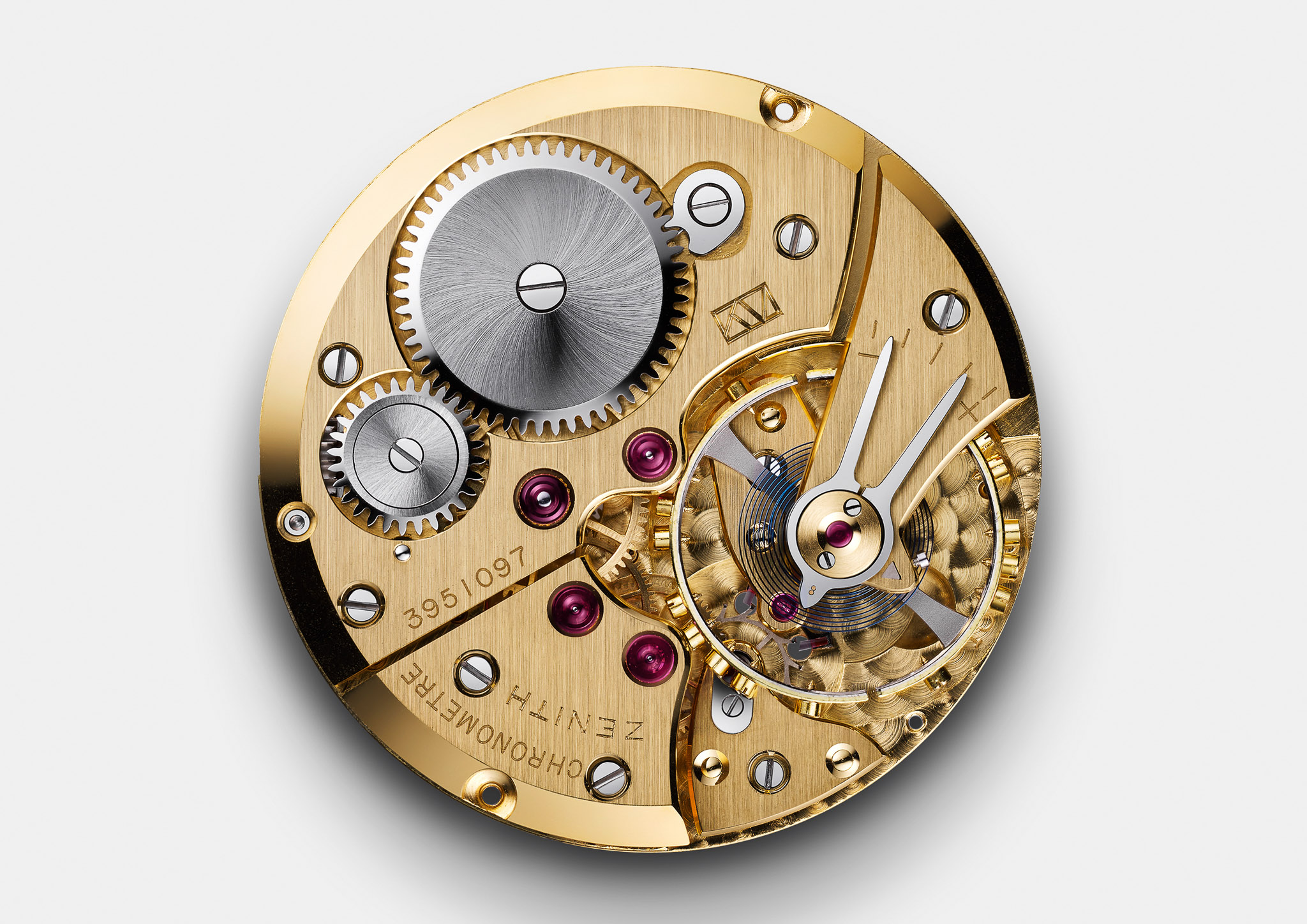 On the genesis of this one-of-a-kind collaborative effort, ZENITH CEO Julien Tornare shared, “I’ve known Aurel Bacs and Alexandre Ghotbi for years. We’ve had discussions about ZENITH’s patrimony and what were the hidden treasures that remained to be uncovered. Specifically, they asked about the Calibre 135. Then I had the idea, why don’t we collaborate with Phillips to create a special series around this movement? The beauty of having such a rich patrimony as ZENITH’s is to share it.”

“Wouldn’t it be great to do a sort of super limited edition with Calibre 135?” recounted Aurel Bacs. “Julien and Romain (Marietta, Head of Product & Heritage at ZENITH) came back to us and said ‘guys, we have a surprise for you.’ But who would’ve thought that they would come with the real, observatory tested, sort of Formula 1 winning movements? This is how it all started.” 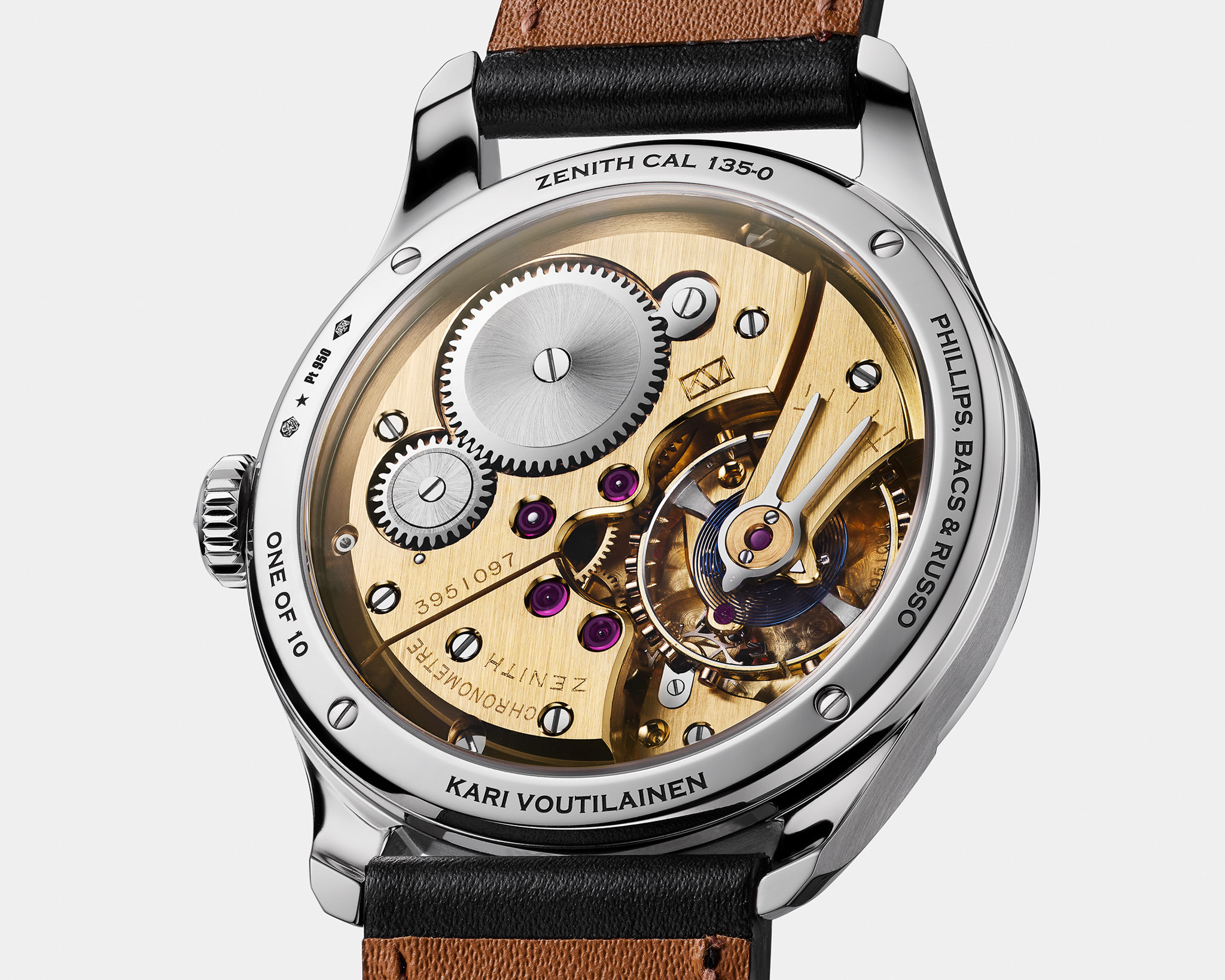 ZENITH’s contribution to the world of precision chronometry is nothing short of inspirational. Ever since its foundation in 1865 and right up until today, the Manufacture has never veered from its pursuit of precision. One area where ZENITH excelled was in observatory chronometer competitions, having amassed more awards than any other watchmaker with well over 2’330 chronometry prizes to its name. In the mid-20th century, one movement outshone all others during the golden era of observatory chronometer competitions and reigned supreme: the Calibre 135-O.

Developed from 1945 onwards by Ephrem Jobin, the Calibre 135 was produced from 1949 until 1962 in two distinct versions: a commercial variant, and a second iteration made solely for taking part in chronometry competitions at the Observatories of Neuchâtel, Geneva, Kew Teddington, and Besançon. These “O” movements, which were never commercialized nor cased in wrist or pocket watches, underwent exhaustive testing through drastically different temperatures, shocks and running in 6 different positions, consistently delivered optimal chronometric performance with minimal variations in rate. With over 230 chronometry prizes, the Calibre 135-O holds the most awards of any observatory chronometer calibre in the history of watchmaking.

The 10 movements chosen for this very limited edition belong to the “serial winning” years from 1950-1954, when the 135-O won the competition 5 years in a row – an unheard of and unmatched feat. They were prepared for the competitions and fine-tuned yearlong by the Zenith Laboratoire de Chronométrie. All 10 movements were awarded prizes within the 1st category range and had all been regulated by celebrated Zenith chronométriers Charles Fleck & René Gygax, who worked on the prize-winning movements five years in a row and bolstered Zenith’s reputation as an undisputed leader in precision chronometry.

Tasking Kari Voutilainen with the restoration and finishing of these historical movements elevated them from raw competition pieces to haute horlogerie creations of the highest order. Alexandre Ghotbi affirmed, “These calibres were made for competitions. They were not made to be worn or to be aesthetically pleasing. So, if we’re going to make a wristwatch out of this legendary calibre, who should we ask to take it to the next level? Immediately we said, Kari Voutilainen. He’s an absolute master”.

True to its original era, the Calibre 135 Observatoire is inspired by past commercial wristwatch versions of the Calibre 135, yet unlike anything ever made in the past, the Observatoire Limited Edition draws inspiration from several 1950s references by combining the most emblematic details with contemporary accents. The 38mm platinum round case features tapered lugs that seamlessly fit under the bezel, as well as an oversized notched crown emblazoned with the modern Zenith star logo. 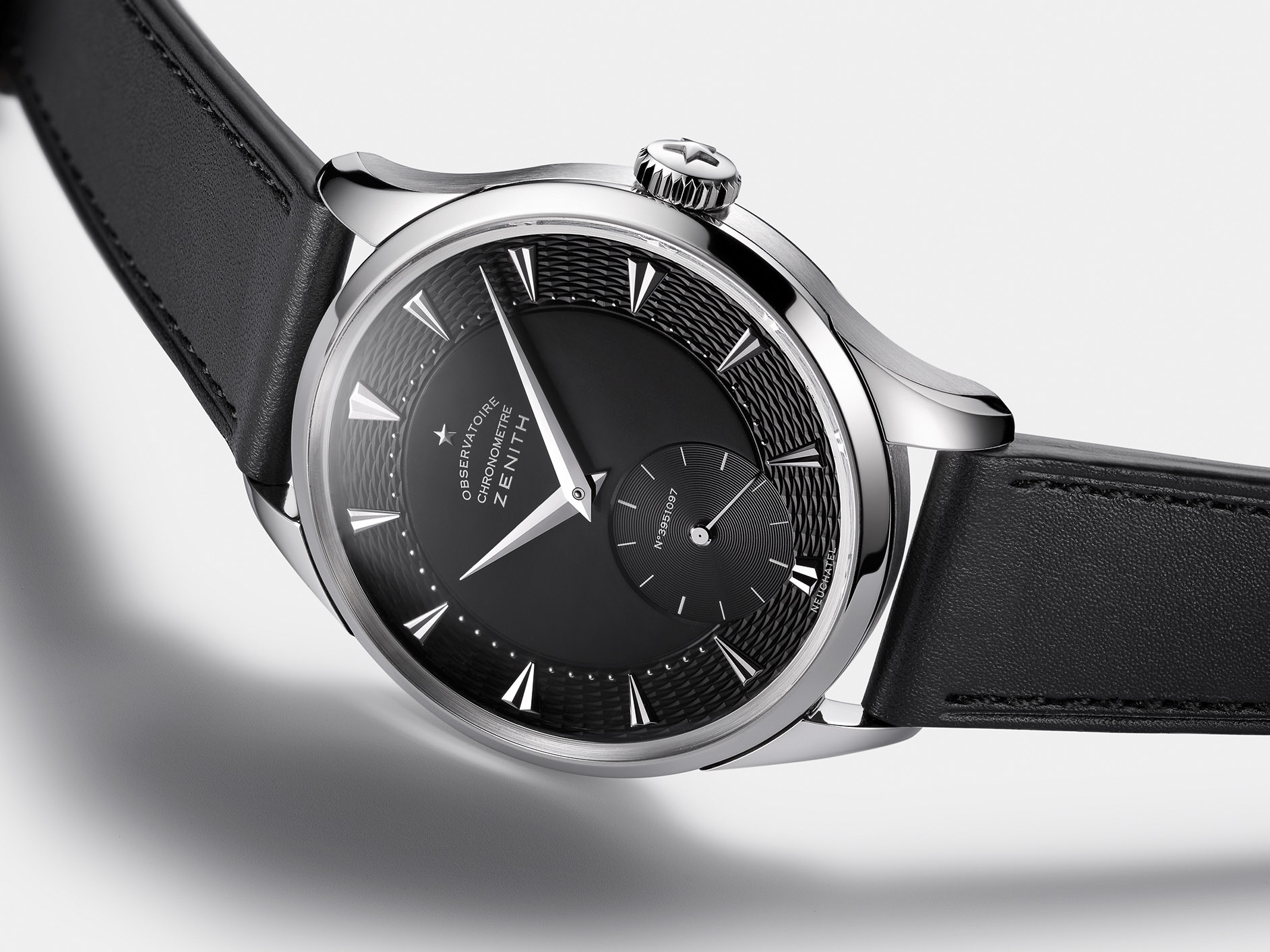 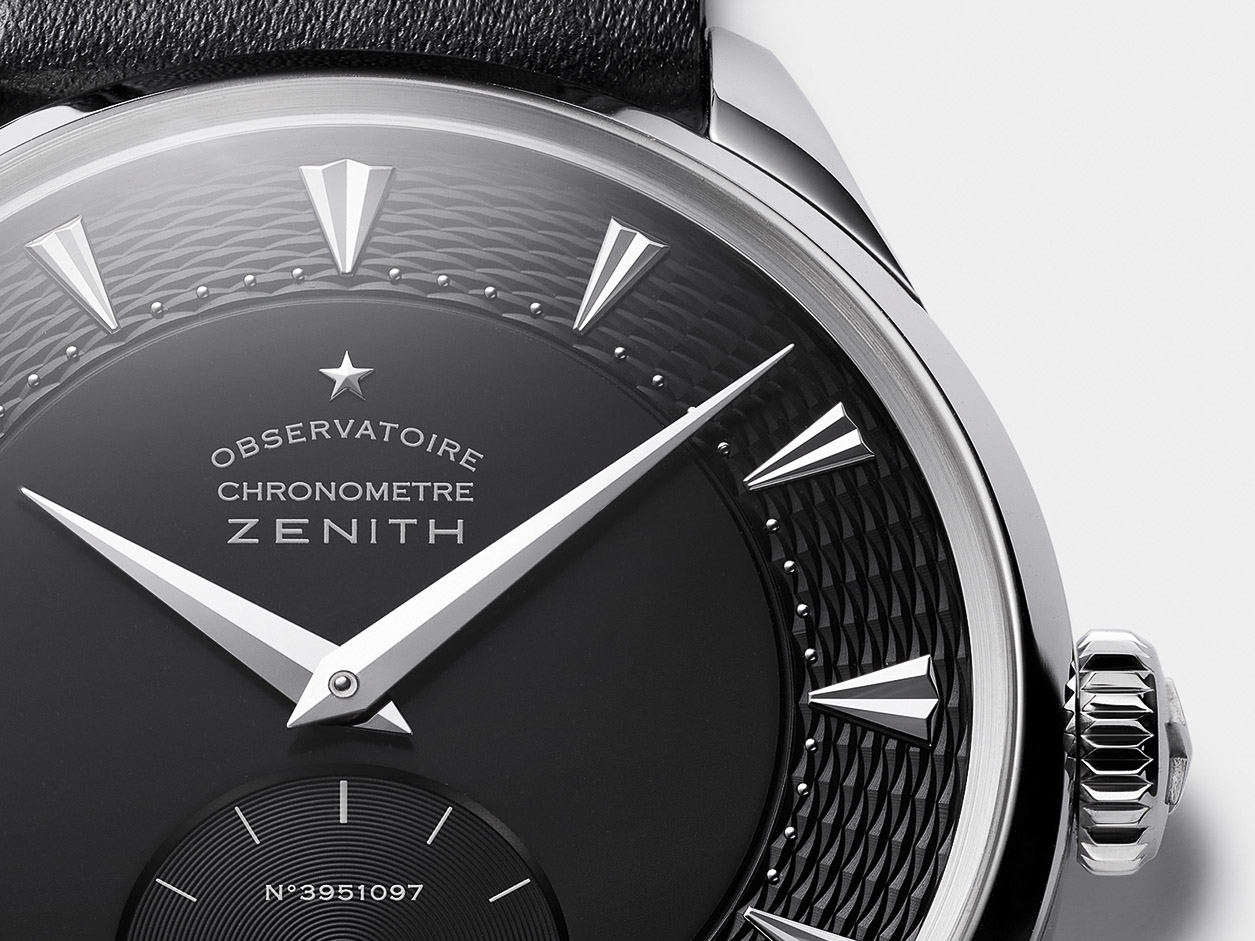 The oversized second counter at 6 o’clock is inscribed with the movement’s serial number, denoting the unique nature of each of these watches and how each was thoroughly regulated by revered chronométriers Charles Fleck or René Gygax, then passed on the supremely skilled hands of Kari Voutilainen and his dedicated team of artisan watchmakers. The dial is signed “Neuchâtel” at the bottom, as Zenith, Kari Voutilainen and the historical Observatory where the Calibre 135-O competed and won during the golden years of chronometry competitions are all based in the Canton of Neuchâtel.

For the first time in the history of the Calibre 135 and certainly for the “O” variant, the observatory chronometer movement that has been impeccably decorated and finished by Kari Voutilainen is visible through a sapphire display back. Cleaned and finished by the master restoration watchmaker, the aesthetic of the historical movement has been refined with hand chamfered and polished edges on the gold-coloured bridges, bevelled and polished screw-heads, circular graining on the main plate, snailed brushing on the ratchet and crown wheels and much more.

Carefully preserving the original regulation and fine-tuning of the movements by Fleck and Gygax while restoring and decorating the movements, Kari Voutilainen highlighted, “The persons working on these movements were the best watchmakers at the time. They had the know-how to make things precise. That precision doesn’t disappear after 70 years. Our duty was not to touch that performance.”

Perfectly fitting the historical context of this exceptional series, the Calibre 135 Observatoire is delivered in a wooden box crafted from walnut wood with brass fasteners, inspired by the containers in which the chronometry competition calibres were transported from the Zenith Manufacture to the Neuchâtel Observatory when competing for a first prize at the time. Secured within it is a book-shaped leather box containing the watch as well as the original historical wooden transport box for the movement.

A previously unheard-of collaborative effort that has drawn on many specific talents and expertise, the Calibre 135-O Observatoire celebrates not only ZENITH’s legacy as a maker of some of the most precise chronometers known to mankind, but also the spirit of Neuchâtel artisanal watchmaking and the art of restoration and superlative decoration. Sold exclusively by Phillips. 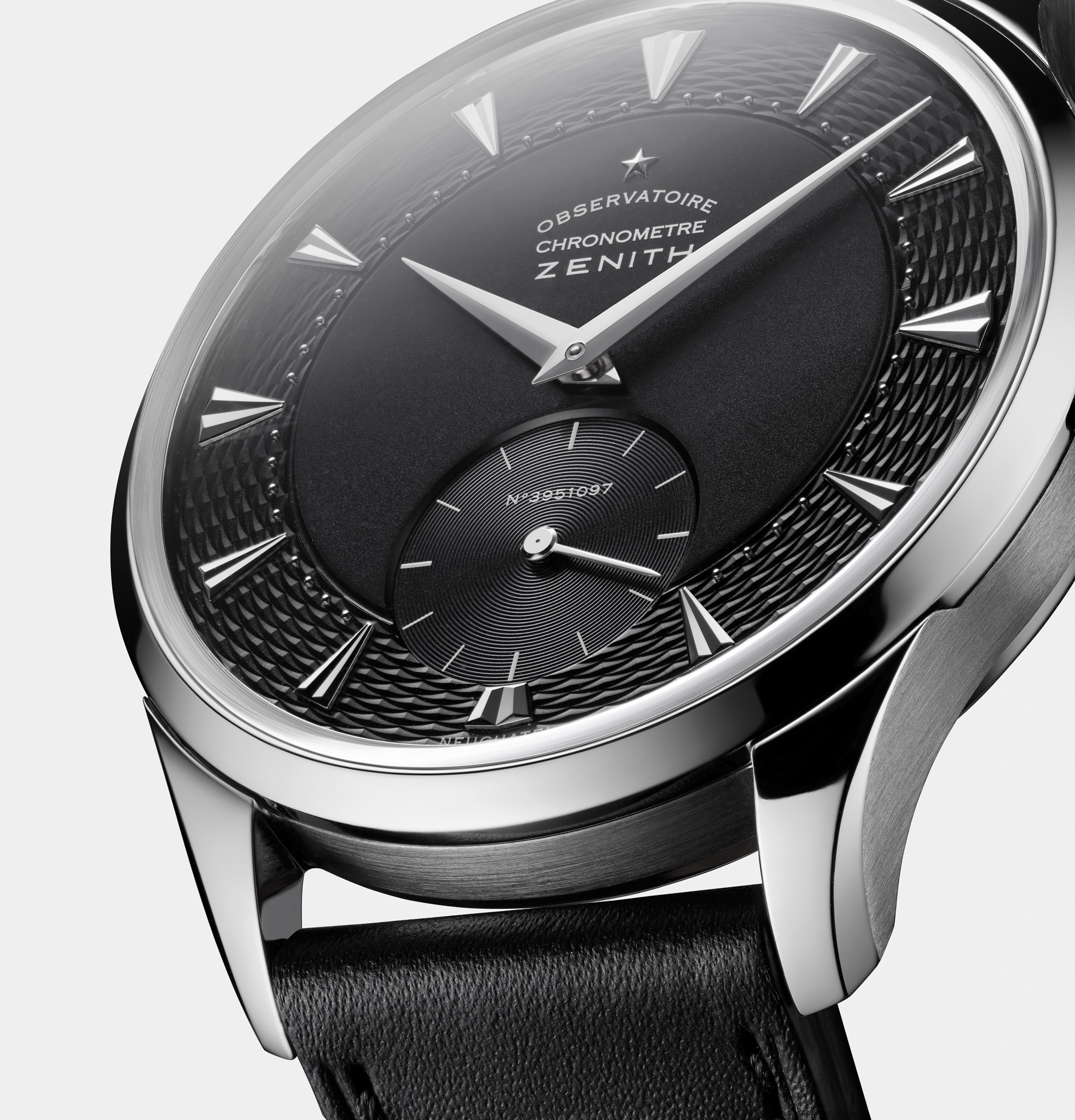 Ten of the real, observatory tested (back in the 50s) and winning movements – Calibre 135-O from THE golden era of observatory chronometer competitions. That´s what we call a bold start for such a project.

Kari Voutilainen (a master on its own, to say the least) in charge of restoration and finishing of the historical movements, just to make them shine like never before. Keep in mind competition pieces never looked like haute horlogerie creations before and one needs guts to work on those. Only one mistake and you may loose one historical piece forever as there is no second chance.

The whole project is more than just the (impressive) movement. Each part of those ten watches represent the pinnacle of fine watchmaking – the case, the dial, the hands … and therefore it is way above anything we have seen from Zenith before. Comblemine for example the team of Kari Voutilainen in charge of dials did a great job – once more – and it´s far from being industrial standard, no matter which brand we are talking about. There is added benefit on each part of this watch and it is way more than just a marketing gimmick of three well-known players in the market. 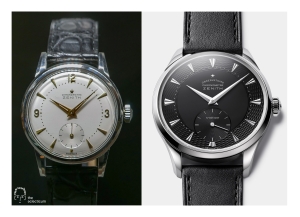 In general, and having all the many ‘collaboarations’ with Kari Voutilainen in mind, this one brings back fond memories of the early days of Kari’s pieces – which were essentially the same: highly refinished historical chronometer movements which needed utmost skill and care to be brought back to life. There is a lot more ‘collaboration’, a lot more substance, and a lot more ‘Kari’ in these 10 watches than in some who also mention his name…

Projects like this ask for serious passion, skills and funds to make them happen. A “crazy” and very strong market like today helps, because you can´t make it happen and sell it cheap afterwards. It´s not a bargain for sure, but we trust there are more than enough serious collectors with means to make it happen – a historical masterpiece with added benefits for their collection.

Criticisms? Well, much discussion was on the price, but honestly we feel they could have priced the pieces ad libitum, we guess… We also don’t know which documentation comes with each peiece, e.g., copies of the original chronometer test results of each individual movement? Finally, given the nature of the Cal. 135-O and also with all the emphasis to ‘chronometer’ on the entire watch, we would have considered it adequate if the final watches would have tested again – and no, we’re not speaking of COSC, we have real observatory criteria in mind!

In the end, we’re left with our heartfelt congrats to the team(s) from Zenith, Voutilainen Artisan d´Horlogerie d´Art and Phillips in association with Bacs & Russo!

Watches & Wonders 2022 – a year of eclectic refinement and delights for...