If you forget famous names and look around the corners of Trieste, you’ll find some authentic treasures such as ‘La Triestina’ - treasures that are under thread

Italy and coffee – the one doesn’t go without the other. Trieste, the easternmost port city bordering to Slovenia and Croatia, is the country’s ‘coffee capital’, with a few famous brands headquartered there. But to experience pure, unfiltered coffee experience not tainted by marketing, you better stroll through the streets of Trieste – it an economic, cultural and societal phenomenon which on top titillates your palate! 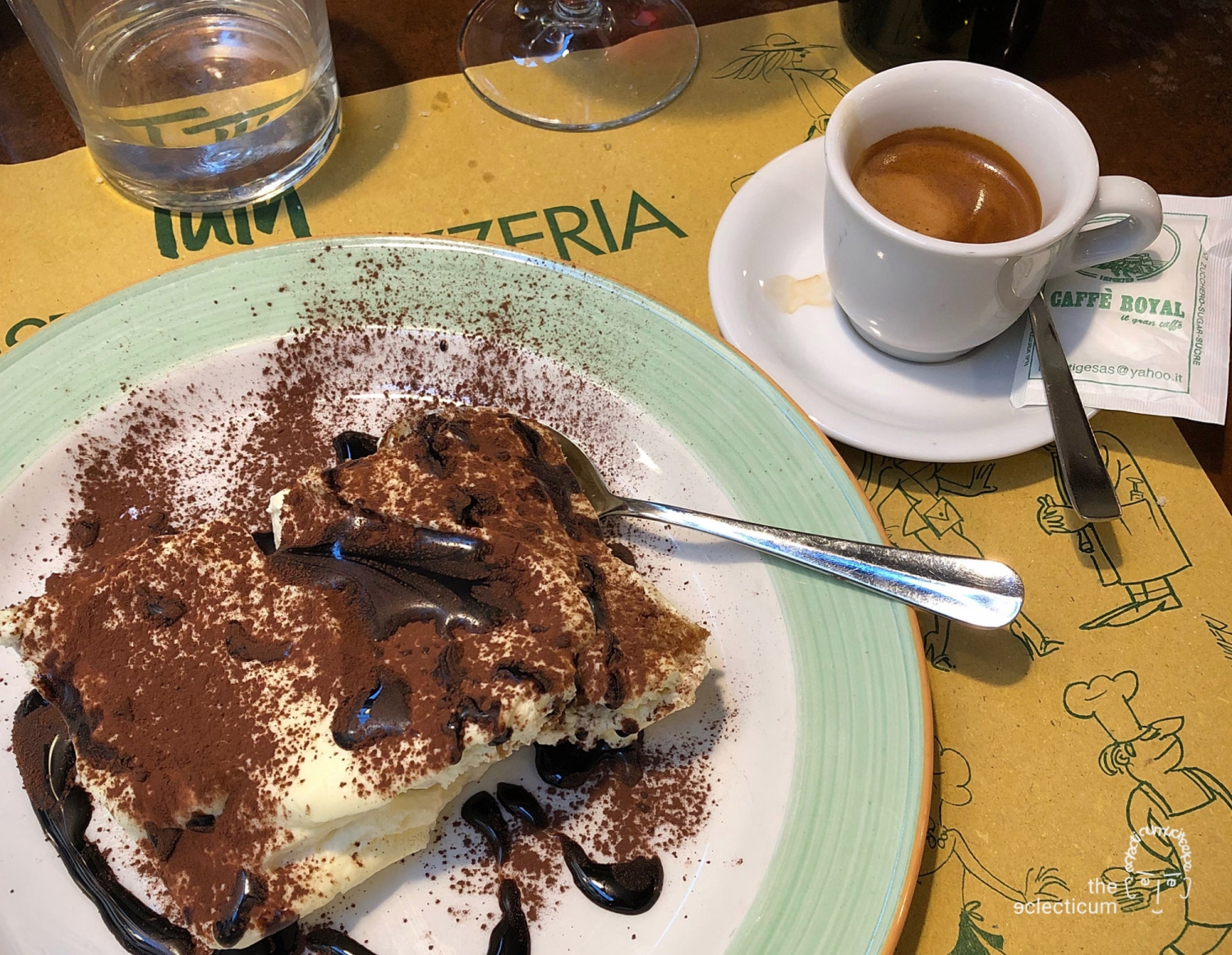 If you think about the Northern Italian city of Trieste – ‘Italy’s Vienna’ if you like – the notion of coffee will come sooner rather than later. Coffee and coffee importers, roasters and dealers have a long tradition which dates back to the Habsburg rule of the city between 1382 until 1918, and particularly a few pathbreaking decisions by Empress Maria Teresa of Austria-Hungary, namely, to declare Trieste a ‘Free Port’ in 1719, making it attractive as an im- and export hub, and later to allow coffee roasters to sell liquors and vice-versa liquor produces to sell coffee. 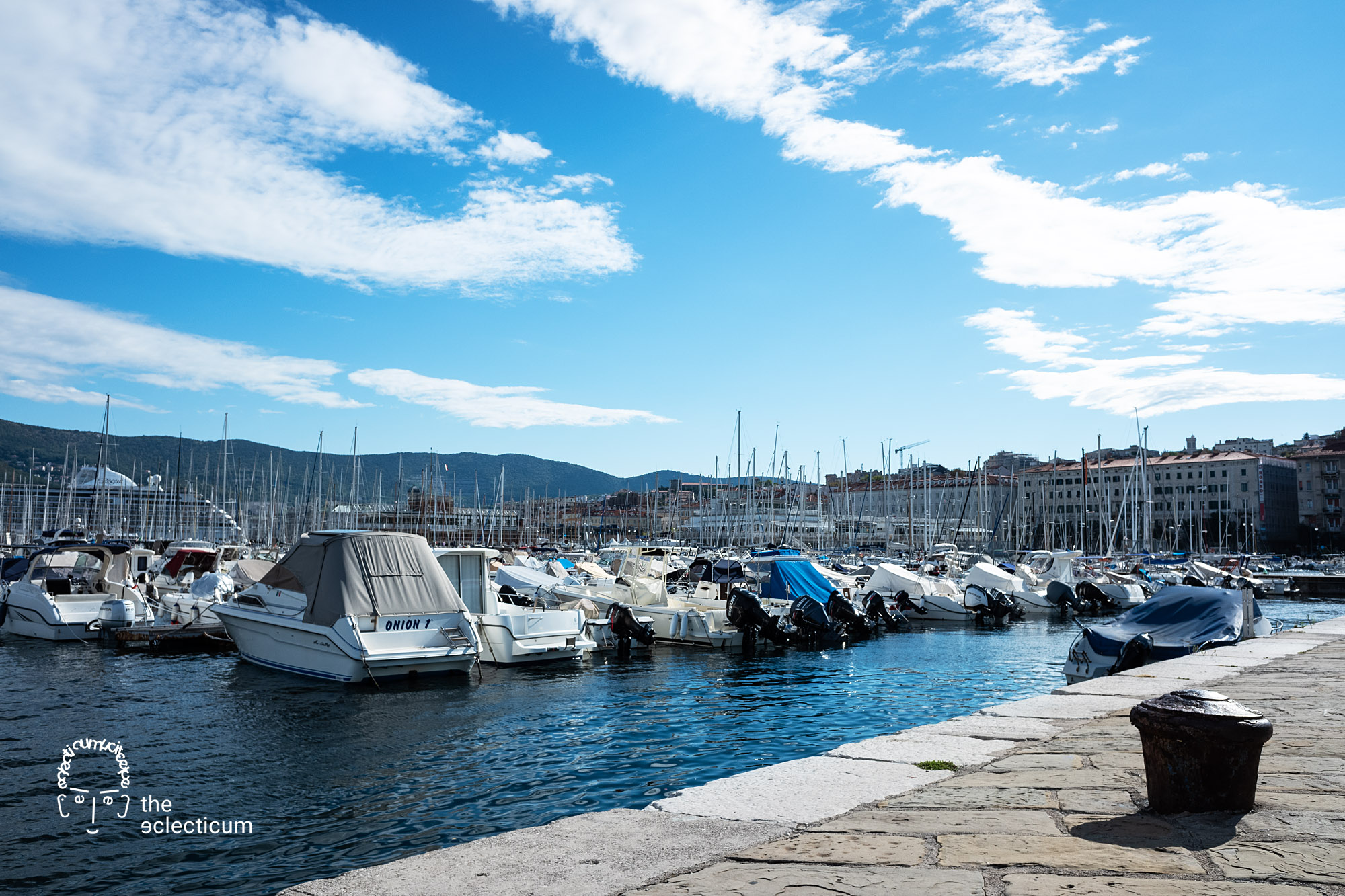 (Harbour view on Trieste) Ever since then Trieste is called the ‘coffee capital of Italy’, and all this thanks to the Austrians… (see why I called her ‘Italy’s Vienna’?)! Coffee has been kind of a characterising commercial and cultural determinant of the city. Still today ‘bars’ play an important social role as well: a ‘bar’ is not only a coffee place or suitable for a quick lunch, but also newsroom, meeting point, living room and play station at once. For those who not so often visit Italy, a ‘bar’ is a (at many times claustrophobically small) coffee place, ‘café’ is what they serve… 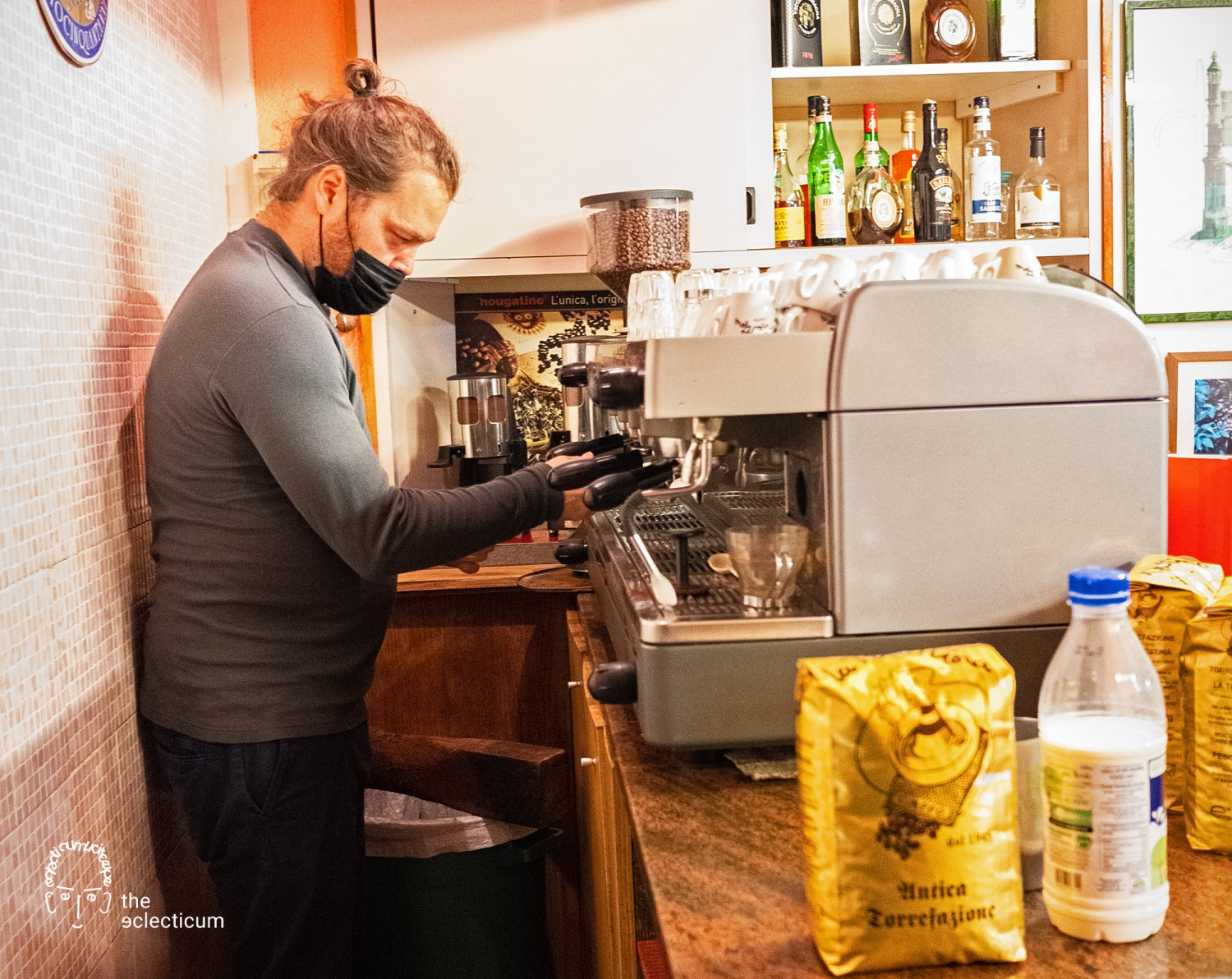 (Matteo from ‘La Triestina’ preparing the typical ‘capo in b’)People of all origin and from all social classes come here to enjoy a quick ‘café’ and exchange gossip as well as news, and this is why it is so important that a simple espresso (‘nero’ in Trieste dialect) cost anything between 1,00 – 1,20€ and not more – everyone can afford this, everyone can take part in this culture, and as long as this is so the ‘café’ is part of the social glue which holds society together. 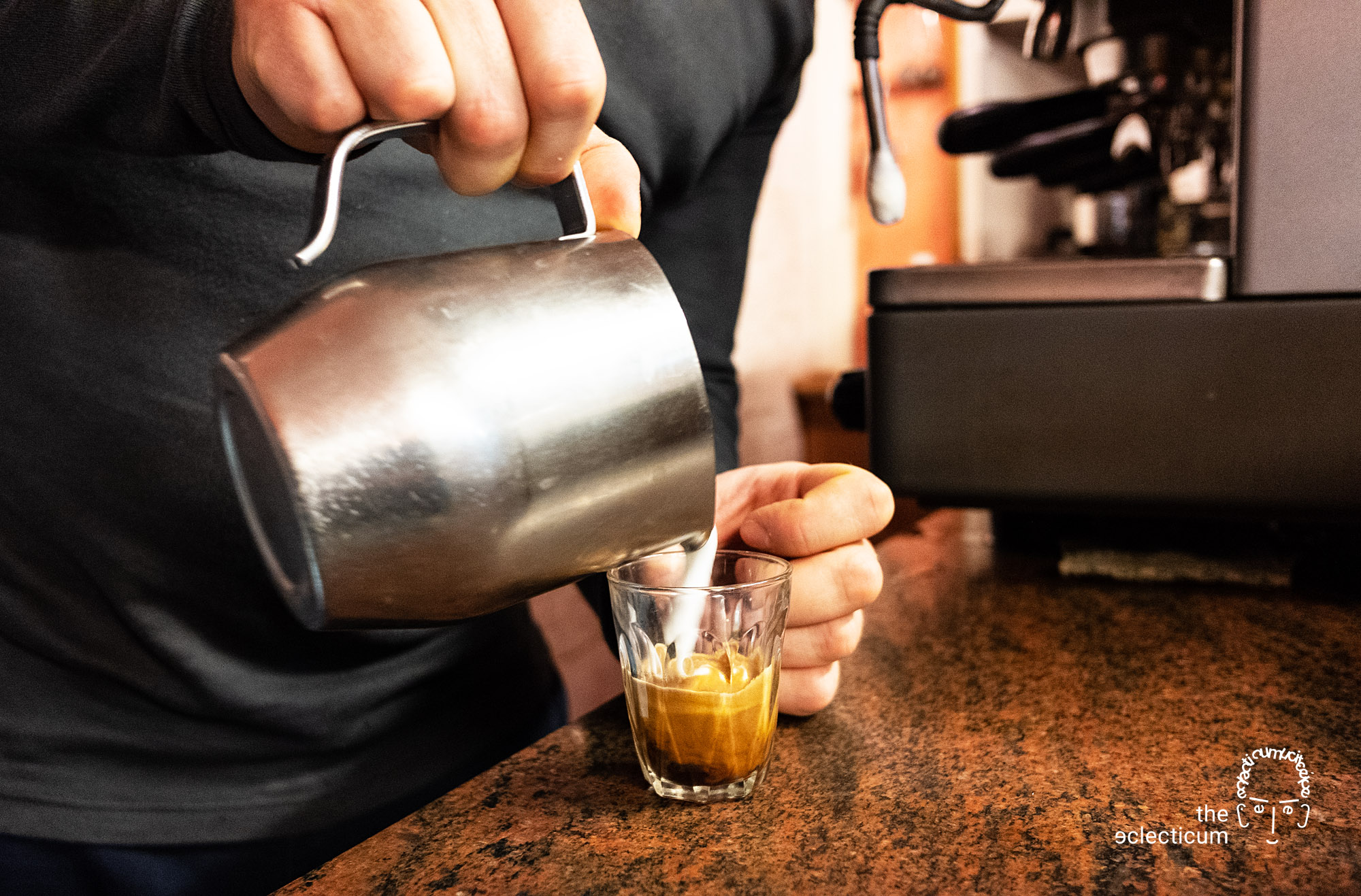 (Matteo from ‘La Triestina’ preparing the typical ‘capo in b’) I alluded already to the specific designations Triestinians have for their coffee – I mentioned the ‘nero’, but there is also the ‘capo’, which is the cappuccino (or better: a macchiato, and espresso with a tiny bit of foamed milk). In Trieste you might want to order your ‘capo in b’, a ‘cappuccino in bicchiere’, i.e., served in a glass instead of a cup. Legend has it that the families in Trieste were poor for long times, and thus could not afford having separate cups for coffee – hence they used their drinking glasses for coffee as well. Another fascinating idiosyncratic aspect of coffee in Trieste!

Today, there are two main coffee roasters located in the city – globally known Illy (which also operates a well-respected coffee university) and the smaller but still fairly famous Hausbrandt. For the Triestinians, its either the former or the latter, there is nothing in between – if in presence of a Triestinian don’t make the mistake to favour the ‘wrong’ coffee brand (I know well from the time I worked with the United Nations when we had a delegation from Trieste – predictably, they fought fiercely amongst themselves about the two coffee brands… A sight to be seen!). But Hausbrandt and Illy are not the sole representatives. There are several other smaller importers, blenders, and roasters. In fact, there are about 50 companies active in Trieste’s coffee industry.

I consider myself a city dweller, who loves to experience a city by feet – the discoveries one makes are priceless, and I think the ‘experience’ of a city by taking it by foot is the most intense. One discovery I made and which I’d like to present today is the Torrefazione La Triestina in Trieste’s city centre. 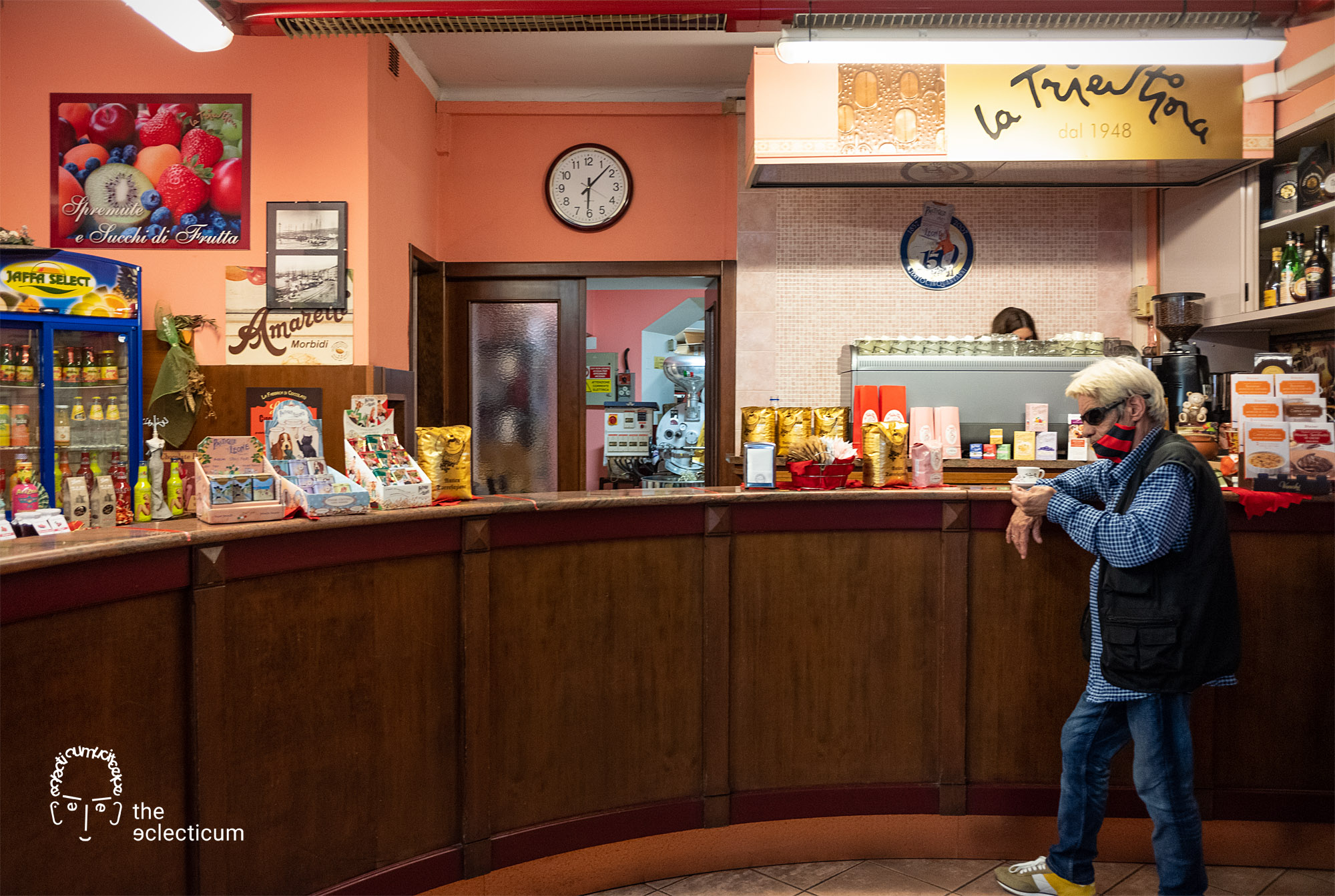 Upon entering the large bar room of ‘La Triestina’ you’ll notice that backdoor is usually open and shows a glimpse to the heart of the workshop – the roasting machine. It’s a small one for artisanal uses, but unfortunately environmental regulations prohibit the operation of such machines within the city. Therefore, ‘La Triestina’ now cooperates with a few other small roasters and set up two like machines in the industrial areas of the city. Still, you get the idea. 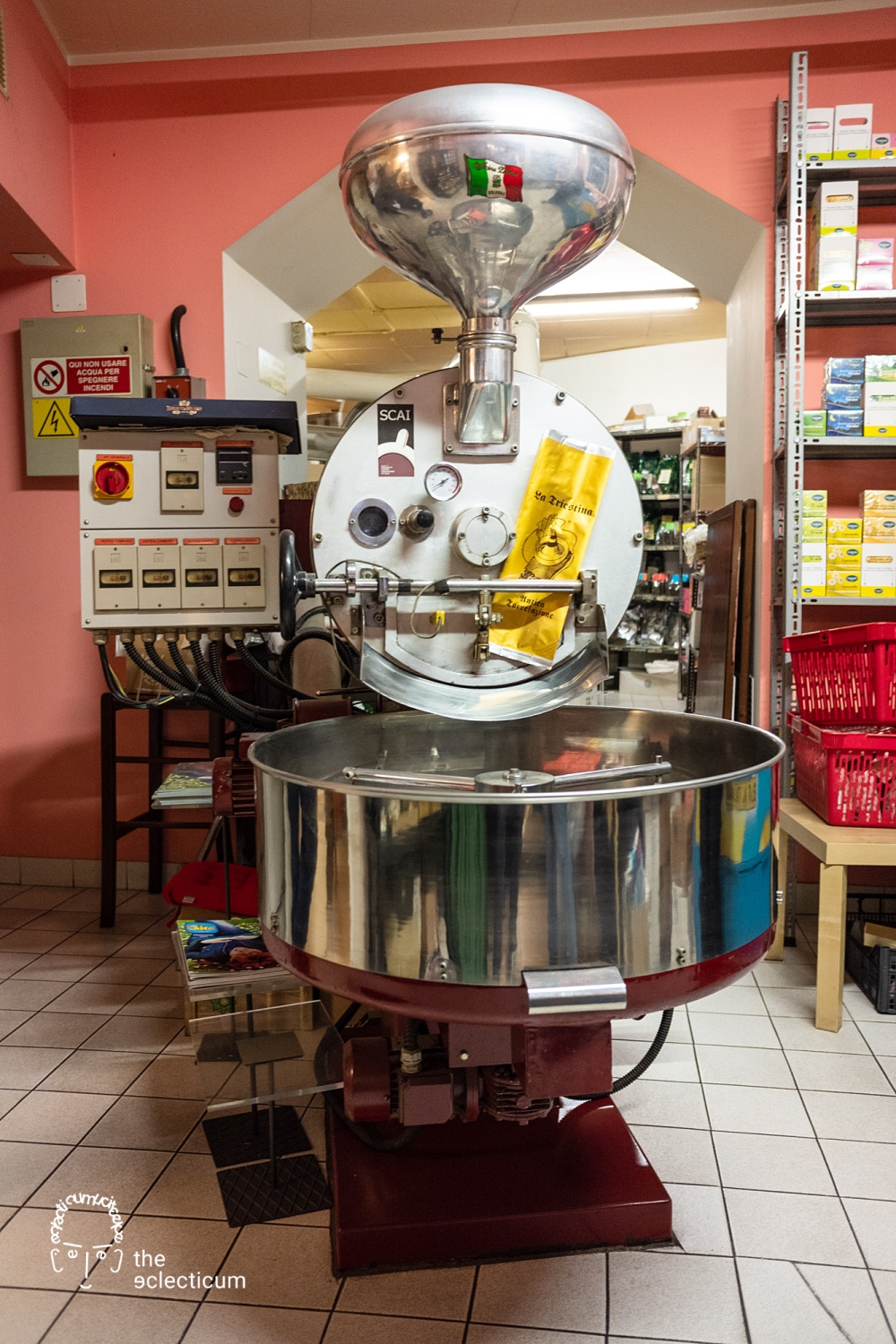 (Small-scale roasting machine at ‘La Triestina’) ‘La Triestina’ looks back to a history since 1948, and is uninterruptedly run since then, today by nephew and uncle Matteo and Marco as well as Sara. It is a small, artisanal workshop processing only about 5 tons of coffee per year, and blending them into several qualities distinguished by coffees of various origins and composition:

Very few kilos and only of the base ‘Moka’ blend is exported (there is one shop only in Vienna who carries ‘La Triestina’, and one in London), everything else is for local consumption*. 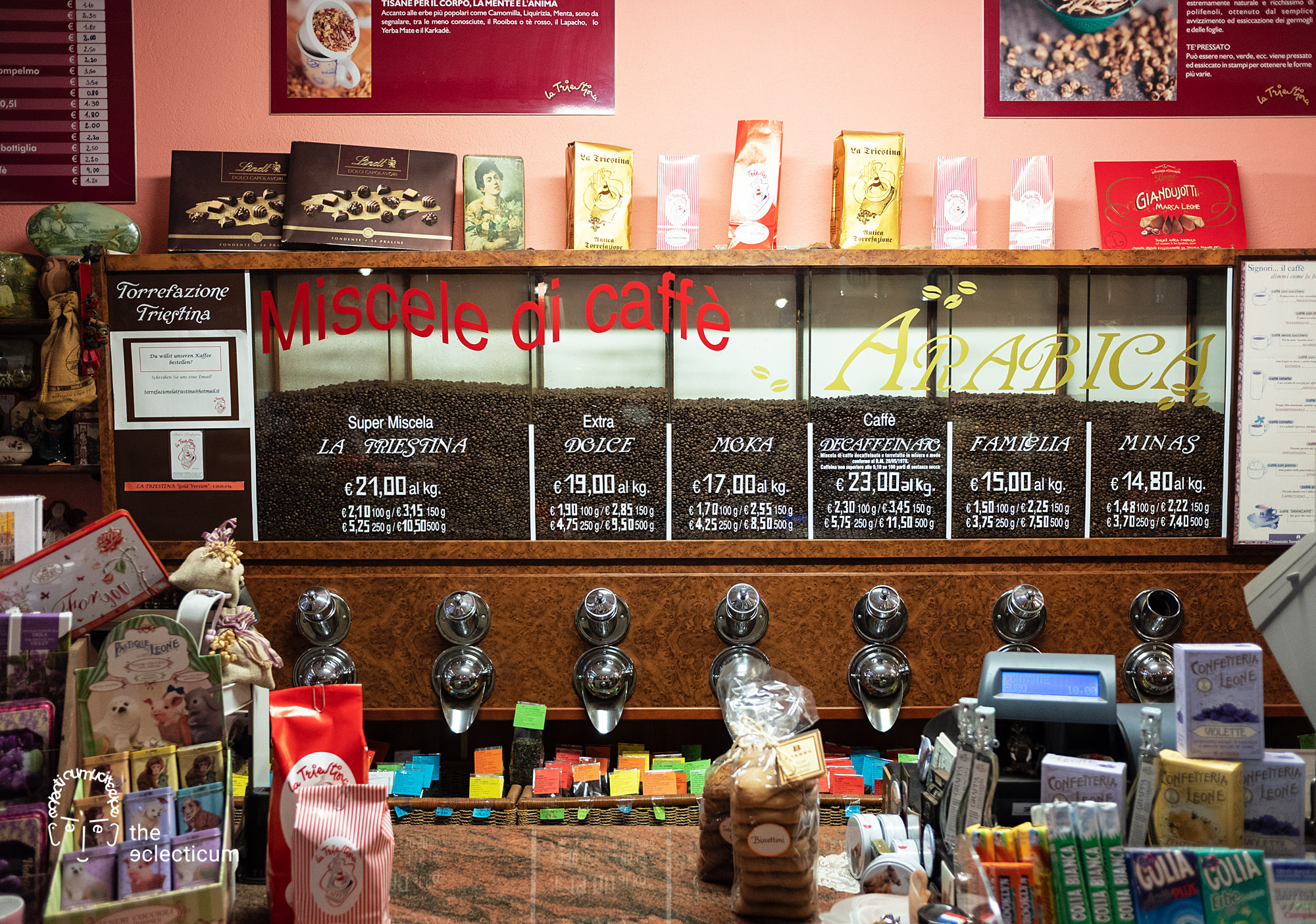 You’ll quickly notice that there is no blend without even a tiny percentage of the Robusta variety. For a Triestinian the thought alone of a 100% Arabica coffee is a nightmarish one… ’La Triestina’s’ house style which is what you typically enjoy in a traditional Italian ‘bar’ – it is not the ‘fruity’, at times even metallic taste one often experiences with many modern single varieties/single origin roasts, it is more a full-bodied coffee with a fascinating, very subtle hint of liquorice and dark chocolate. I personally noticed that I had best results with a rather coarse grinding, but the coffee seems to be quite sensitive to humidity. There are days when I can’t get past a ‘good’ but not exceptional shot. If the stars align however, its heaven… case in point was Matteo who asked me to return next morning to see whether his uncle Marco would make a better coffee – but would it really be the different skill, or not the changed humidity, temperature of a fresh morning in Trieste?

Enjoying Authentic ‘Café’ Culture – But for How Long?

And indeed, when we visited ‘La Triestina’ it made all the impression of a well-aged neighbourhood establishment, with young and old patrons alike having their shot. There is nothing posh or polished here, it is just a cosy small bar offering also selected teas and sweets.

And it is precisely this unpretentious effortlessness which transpires through ‘La Triestina’. I mention this particularly in view of the ‘hipster culture’ around coffee in the recent years. First, you needed to have a portafilter machine at home to be taken seriously, and when this became too ‘mainstream’ it was filter coffee or cold extraction. Honestly, I cannot laugh enough about those hipster figures who are essentially soo much driven by other people than by their own tastes and preferences. But alas, to each their own, as they say… 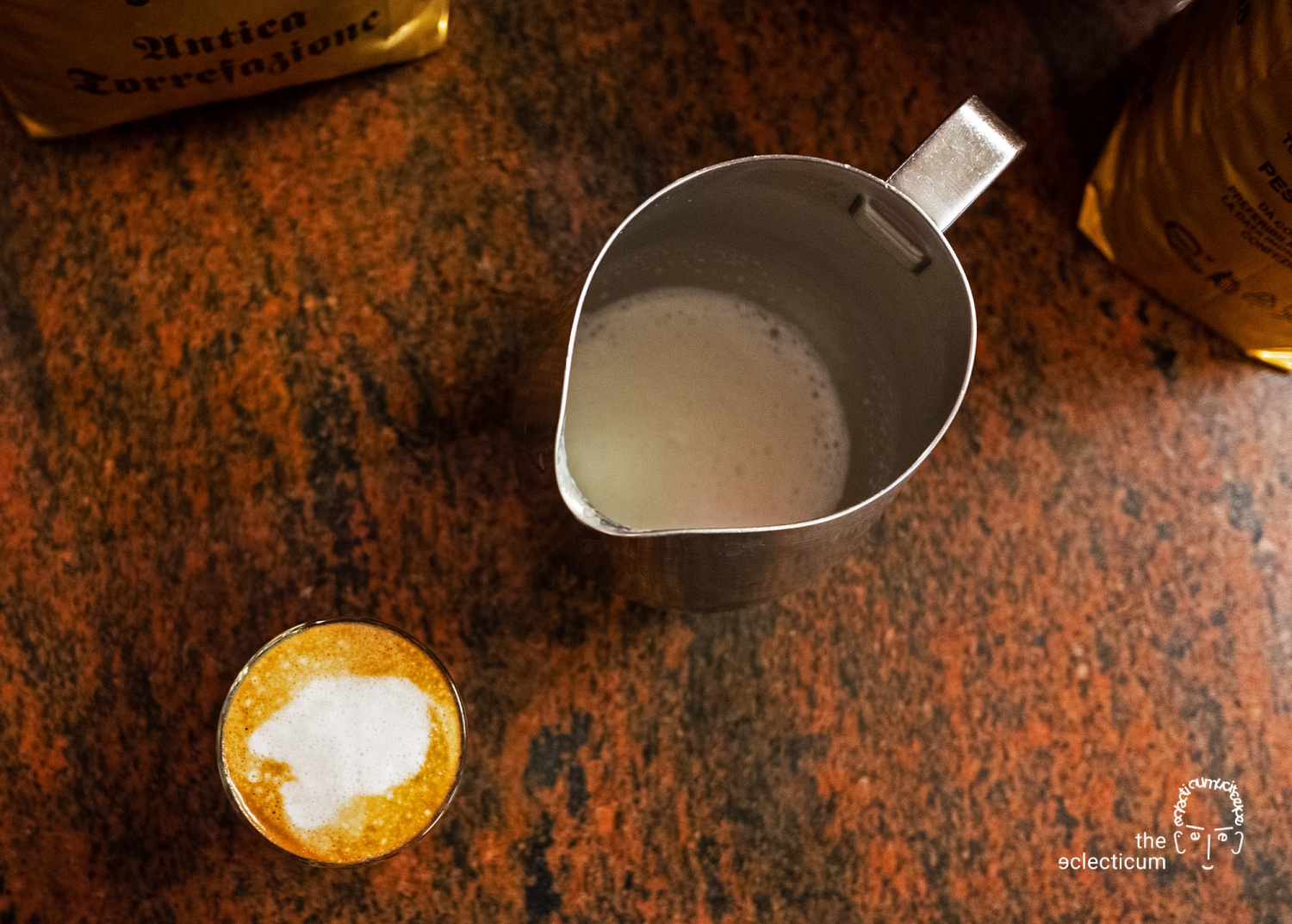 ‘La Triestina’ is a ‘bar’ where everyone feels welcome and at home, entering the doors simply to grab a (very well and passionately) prepared ‘essential’. But such experience is under threat: first, there is the undoubted marketing incentive to upscale and gentrify the coffee bars, which usually follows by rising prices and alienation of a huge and important percentage of patrons. Second, with rents in central city rising concomitant with the influx of large, often international food chains a local bar and restaurant scene is in grave danger of being squeezed out. And finally, plant pests, rising demand and most recently also supply pressure from the COVID crisis have let to rising prices. ‘La Triestina’s’ Sara confirmed that raw coffee prices are indeed steadily rising, ‘but so far we manage and don’t have to pass this on to our guests’. Environmental regulations, as necessary they may be, don’t help either.

So, I can only hope that refugii like ‘La Triestina’ keep on and don’t lose their stamina. They’re tokens of authenticity and safe places in an ever faster spinning world – open, accessible and affordable for everyone. They are jewels which should be taken care for like such – if they’re gone they take their social microcosm that has developed over decades irrevertably with them – a loss which cannot be underestimated. 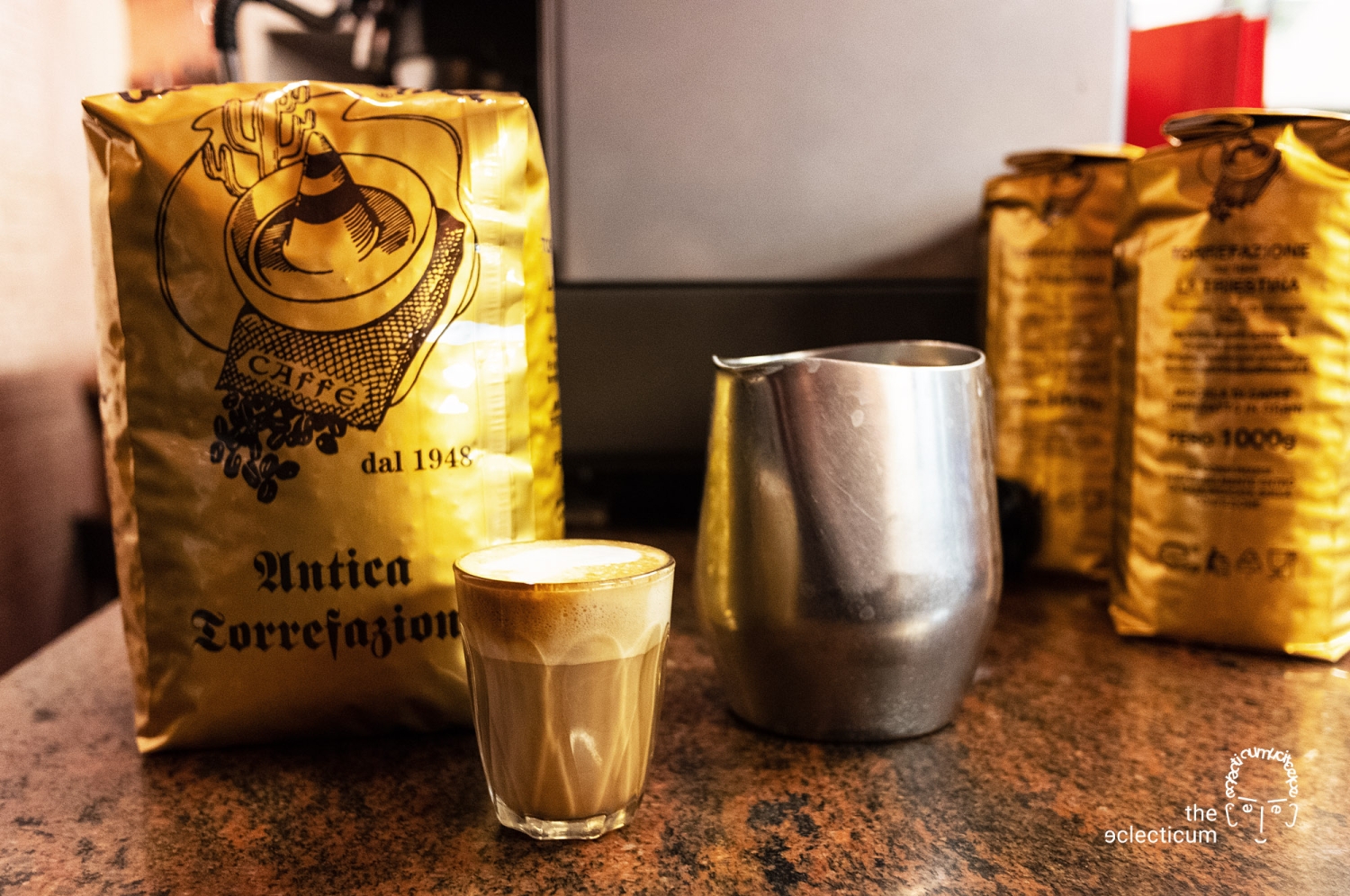 I’d like to thank Matteo and Sara for their warm welcome and their willingness to show me around and talk coffee, and most certainly, for producing a most enjoyable coffee!

That’s it for now, a shot is waiting for me…

*) in case you like what you read and are curious – you can drop them a mail and ’La Triestina’ are happy to ship. For this reason we’re on exceptional basis directly linking to their website – click here!

Glashütte Original: Homage to the Dresden Academy of Fine Arts with a spectacular...

Watches & Wonders 2022 – a year of eclectic refinement and delights for...
Scroll to top