ONLY WATCH: MB&F HM10 Panda. ´SNAPSHOT(s)` with lots of hands-on pictures by ´the eclecticum´, next to a series of illustrations created by Lee Yuen-Rapati (@onehourwatch) and the official press release (text)

THE BULLDOG TRANSFORMS INTO A PANDA
FOR ONLY WATCH 2021 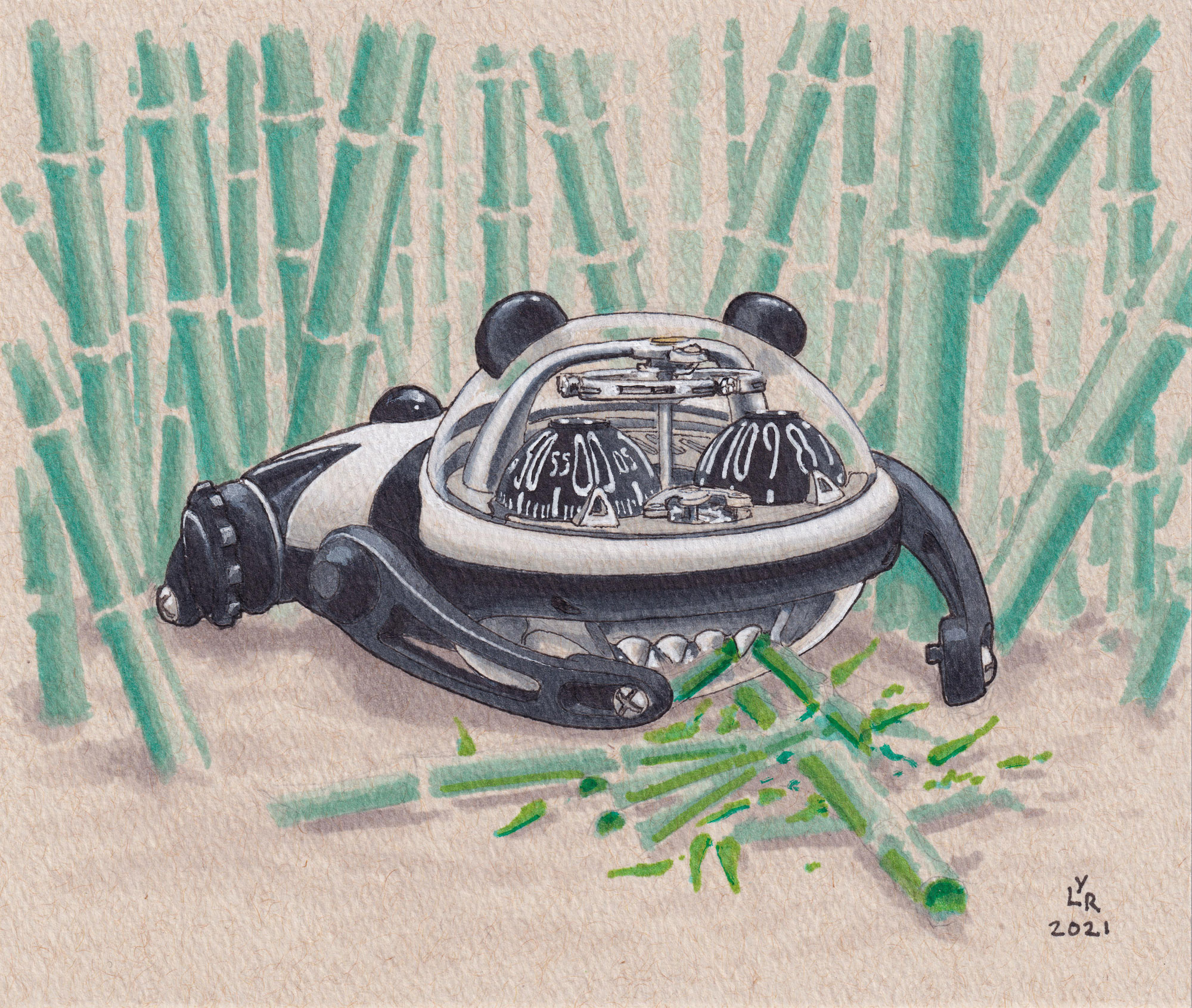 The HM10 Panda for Only Watch will not only bring a smile to collectors’ faces, but also capture their hearts with its important cause. This year marks the ninth edition of Only Watch, a biennial charity auction of one-of-a-kind timepieces where 99 per cent of proceeds go to fund research into Duchenne Muscular Dystrophy, a genetic disorder characterised by progressive muscle degeneration primarily affecting young boys. This is the sixth time MB&F has contributed one of its Machines to Only Watch, once again going above and beyond in the creation of a truly unique timepiece. “I first met Luc Pettavino (founder and organiser of Only Watch) and his late son Paul in 2005,” shares MB&F Founder Max Büsser. “For me, Only Watch is not a marketing stunt or a feel-good operation; we are intimately linked to the story of Luc, Paul, and all the other kids who suffer from Duchenne Muscular Dystrophy.” For this edition, MB&F has transformed its Horological Machine No 10 – aka HM10 Bulldog – into a panda bear, one of the rarest and cutest of the world’s mammals, much-loved by children and adults alike – including Max, whose first cuddly toy was a panda. Because pandas are so associated with children, this is unsurprisingly not the first time the panda bear has made an appearance with MB&F and Only Watch. For the fourth edition in 2011, MB&F presented an HM4 in collaboration with Chinese artist Huang Hankang, which featured a miniature panda bear flying atop an HM4 jet. The base of this new unique piece for Only Watch is Horological Machine N°10 with its rounded, compact body that lends itself perfectly to the shape of the cuddly panda. The top section of the case is coated in black and white lacquer to mimic the animal’s colouring. To accommodate the lacquer, the top section of the standard HM10 titanium case had to be specially crafted for this Pièce Unique in stainless steel. Other unique features include two black titanium panda ears, added atop the sapphire crystal dome, and a rather cute ceramic tail crafted from machined Grade 5 silicon nitride. Much like the panda’s unmistakable eyes, two black aluminium time-display domes dominate the face of the watch – a nod to the other use of the word ‘panda’ in the watchmaking world, where white watch dials with black counters are fondly called panda dials. Other panda bear features include stout yet flexible “legs” that wrap firmly around your wrist and those important panda teeth that are constantly munching on bamboo shoots. The teeth are not only fun but also act as the power reserve indicator. A fully closed mouth tells you that the Panda is wound down and ready for a nap, but if you can clearly see the rows of shining teeth lining the jaws, then it is charged up with 45 hours of mainspring. This threedimensional power-reserve indication has been carefully designed and calibrated to consume the least energy possible, allowing the timepiece to direct its considerable mainspring torque solely towards its suspended balance and its revolving hour and minute domes. Despite its rotund morphology — measuring 45mm across, 54mm from nose to tail, and with a maximum height of 24mm — the HM10 Panda is surprisingly wearable. Its sprung strap attachment “legs” allow the body to fit closely around the wrist, with a strap that is black on one side and white on the other. This unique piece is powered by the manual-winding engine of the HM10 that was designed and developed in-house, and is one of the rare timepieces where you

The HM10 Panda is being offered together with unique works of art by multidisciplinary designer Lee Yuen-Rapati – well-known in the watchmaking world as @OneHourWatch on Instagram – who has graciously created a series of illustrations inspired by the HM10 Panda specially for the auction. 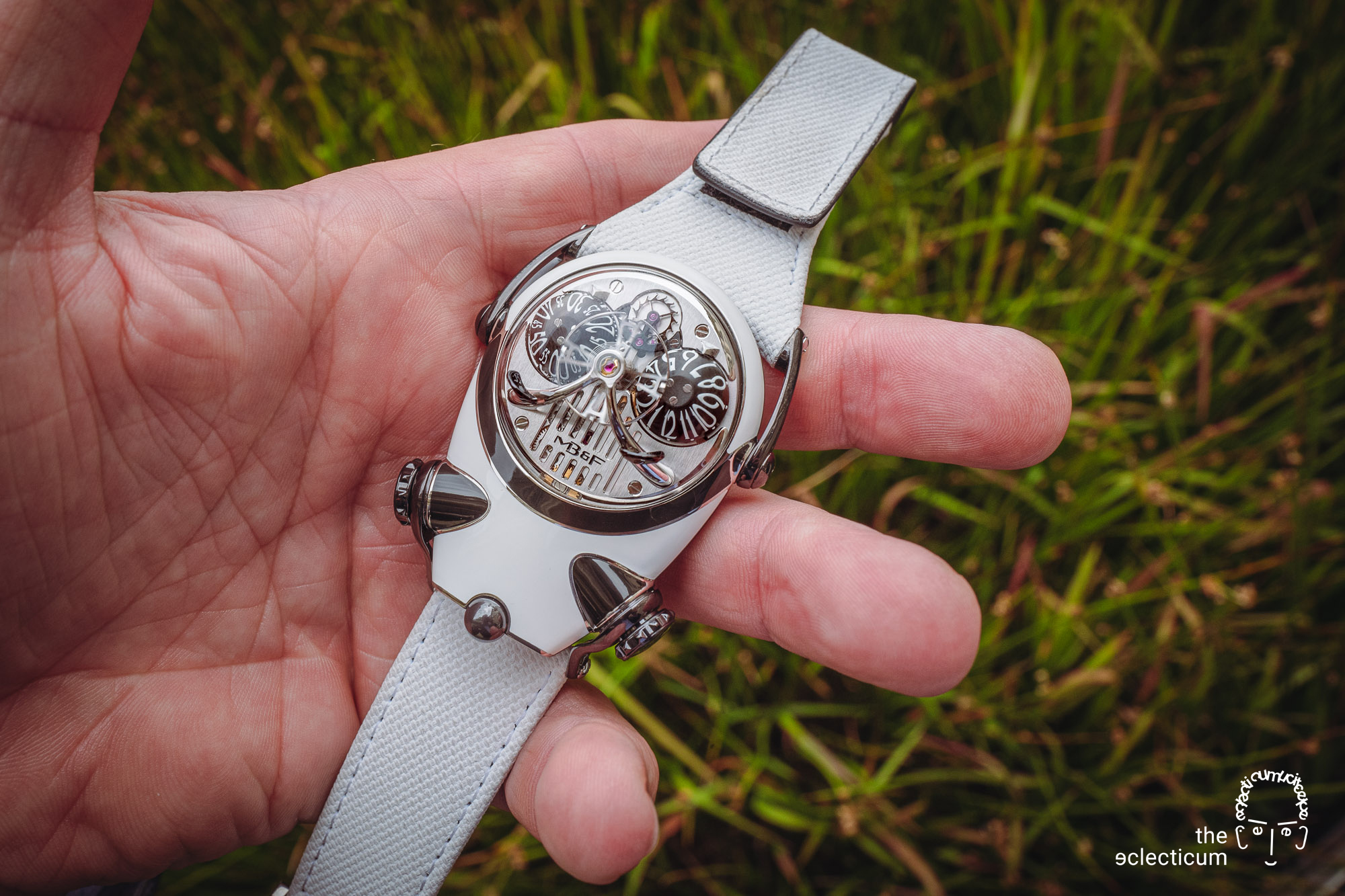 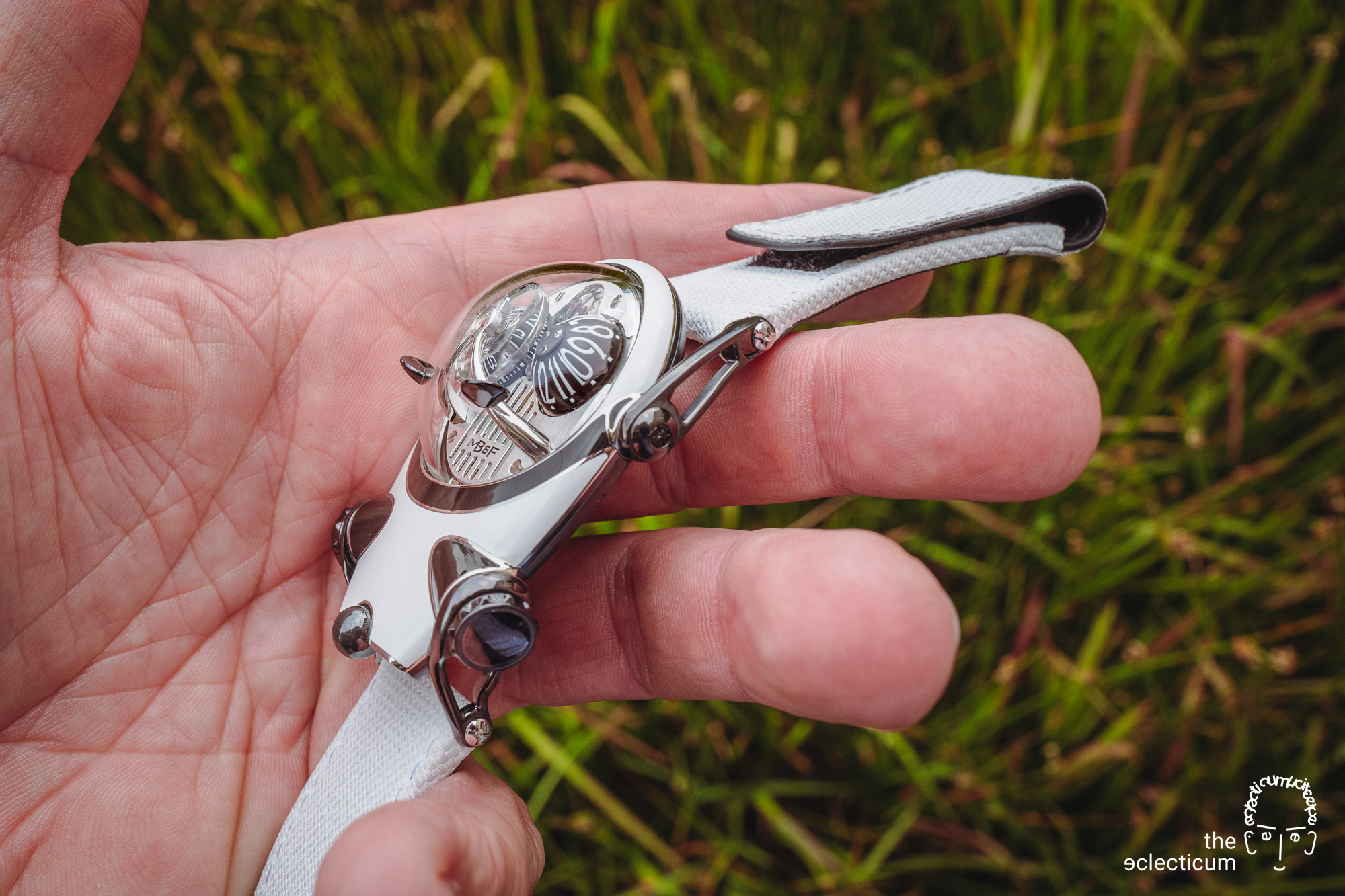 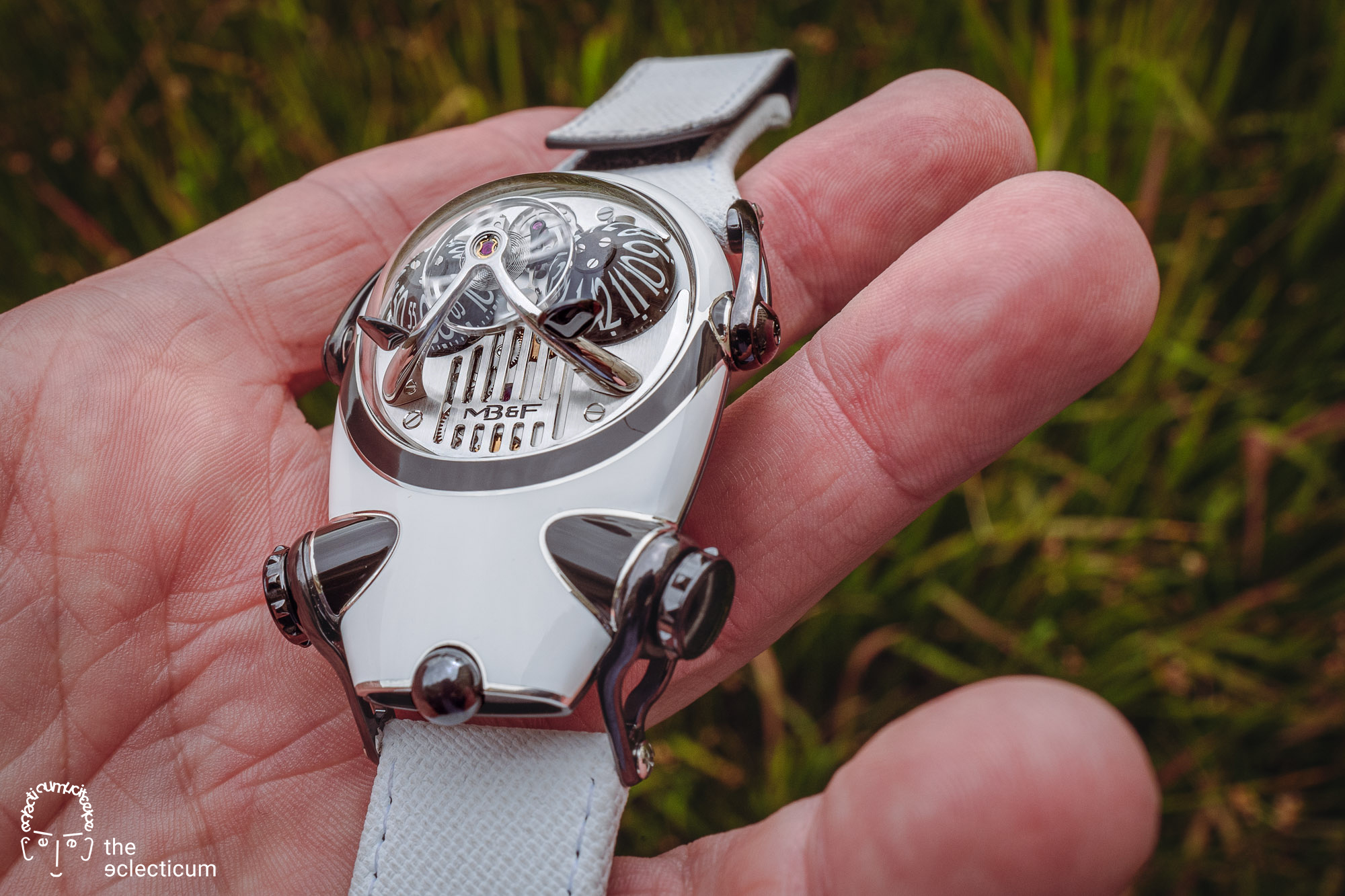 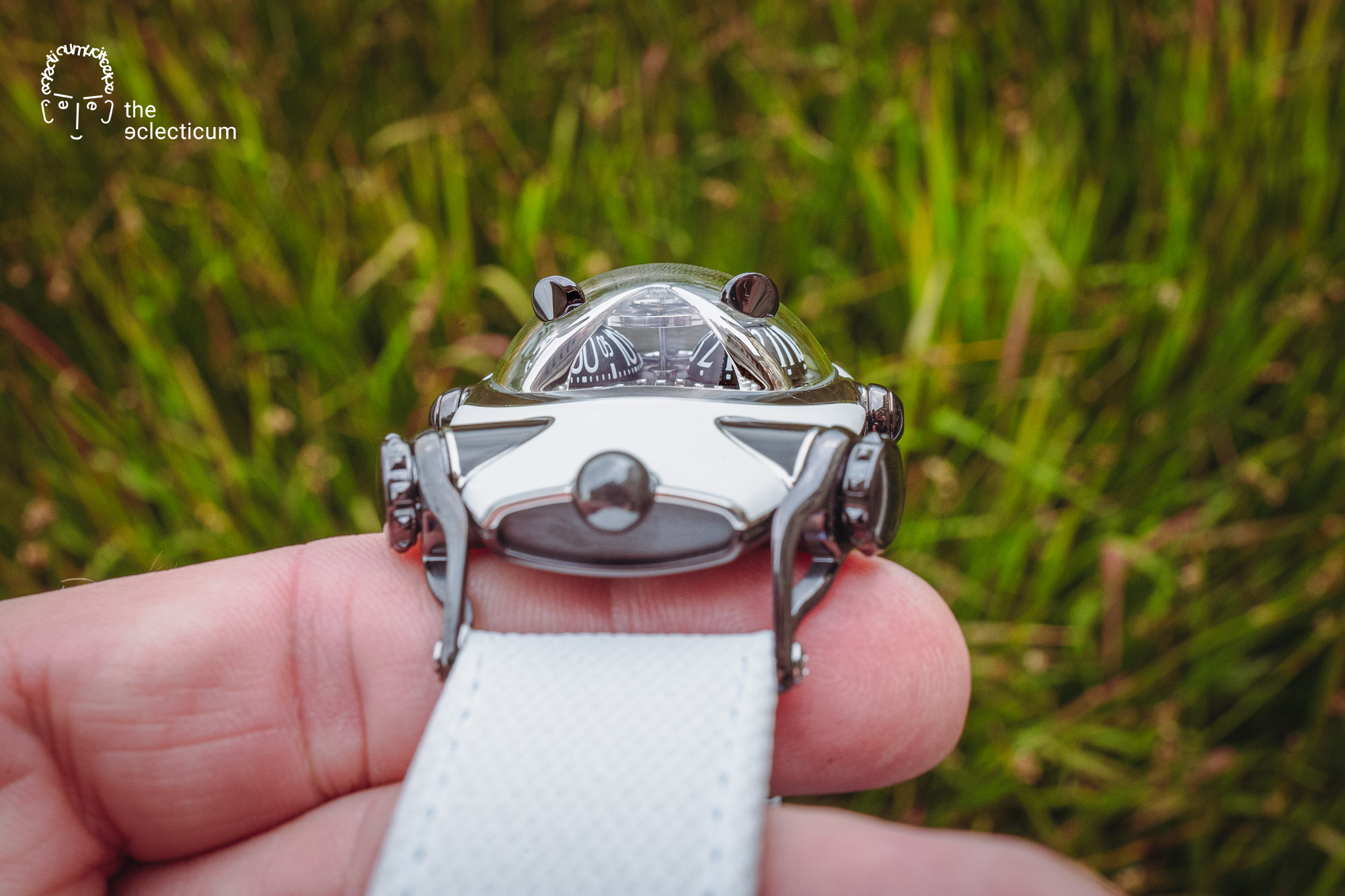 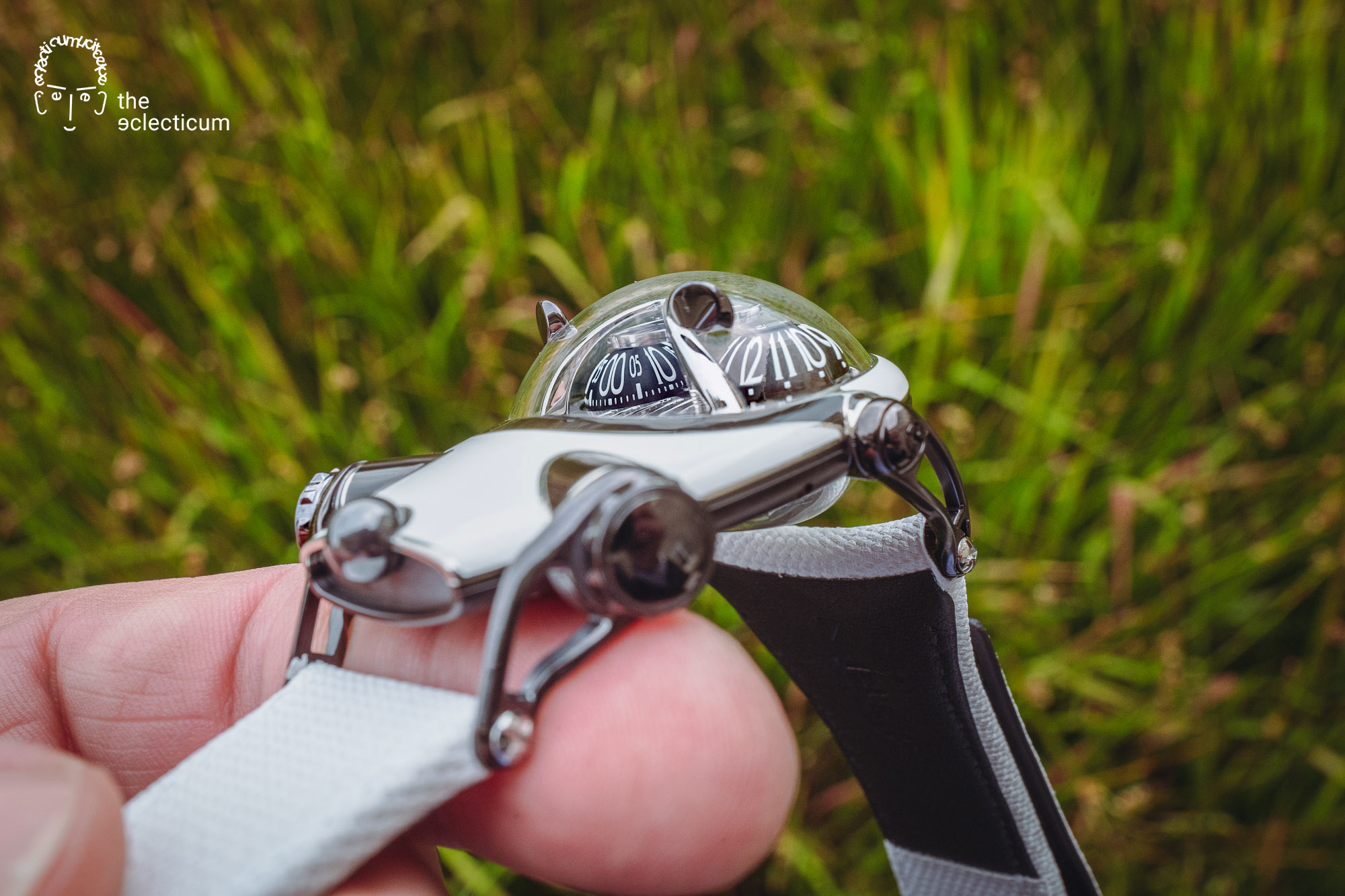 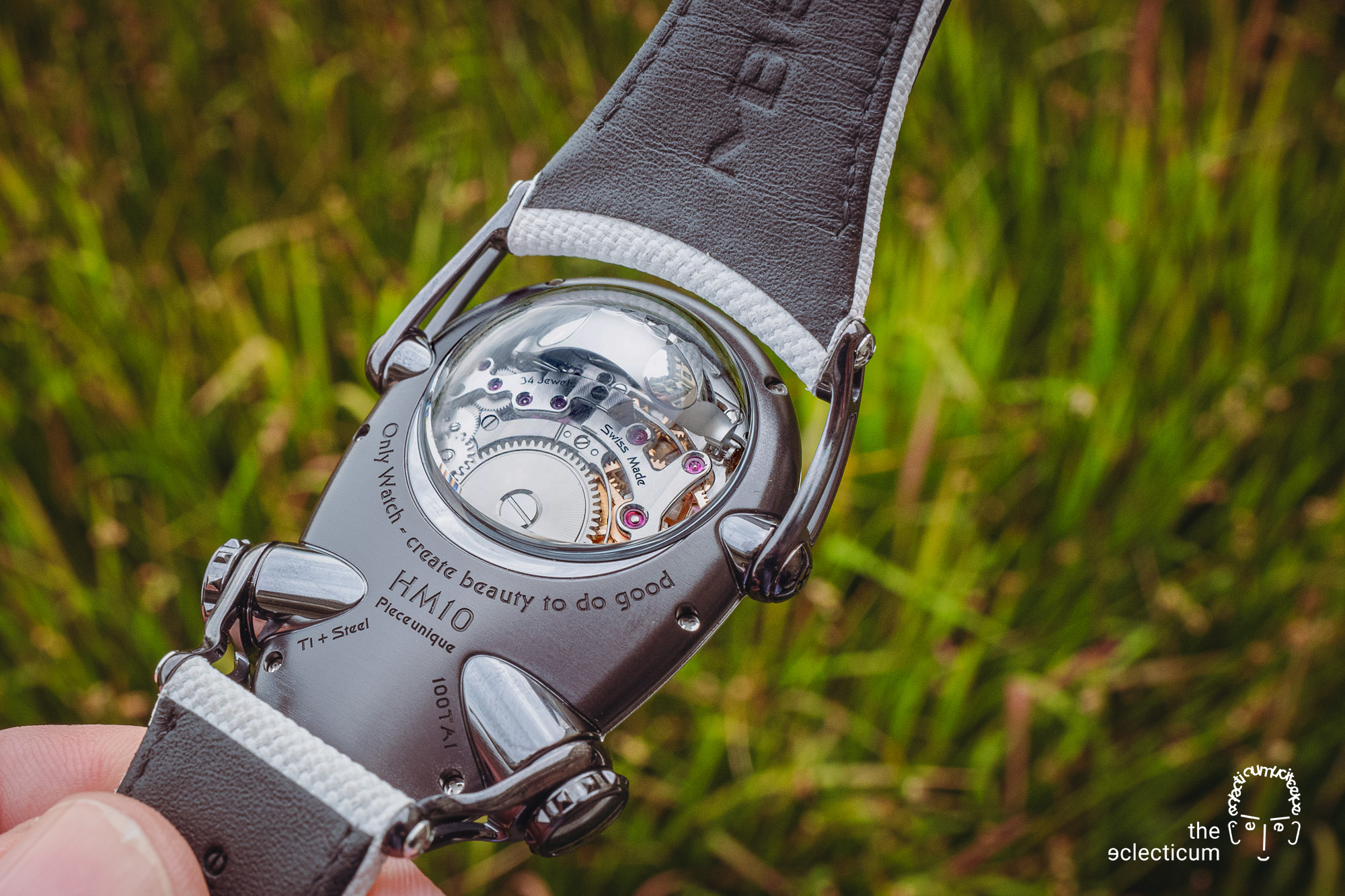 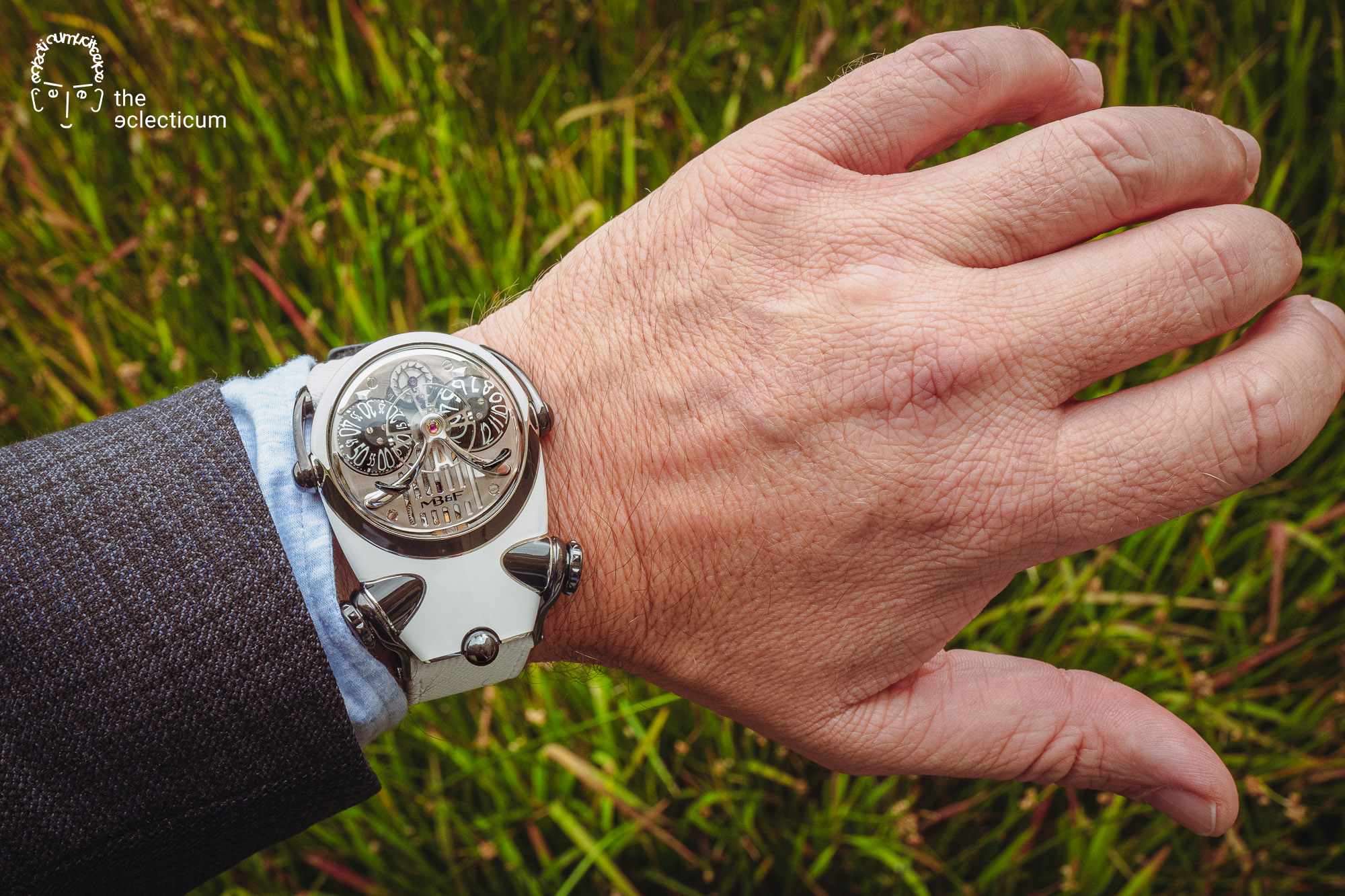 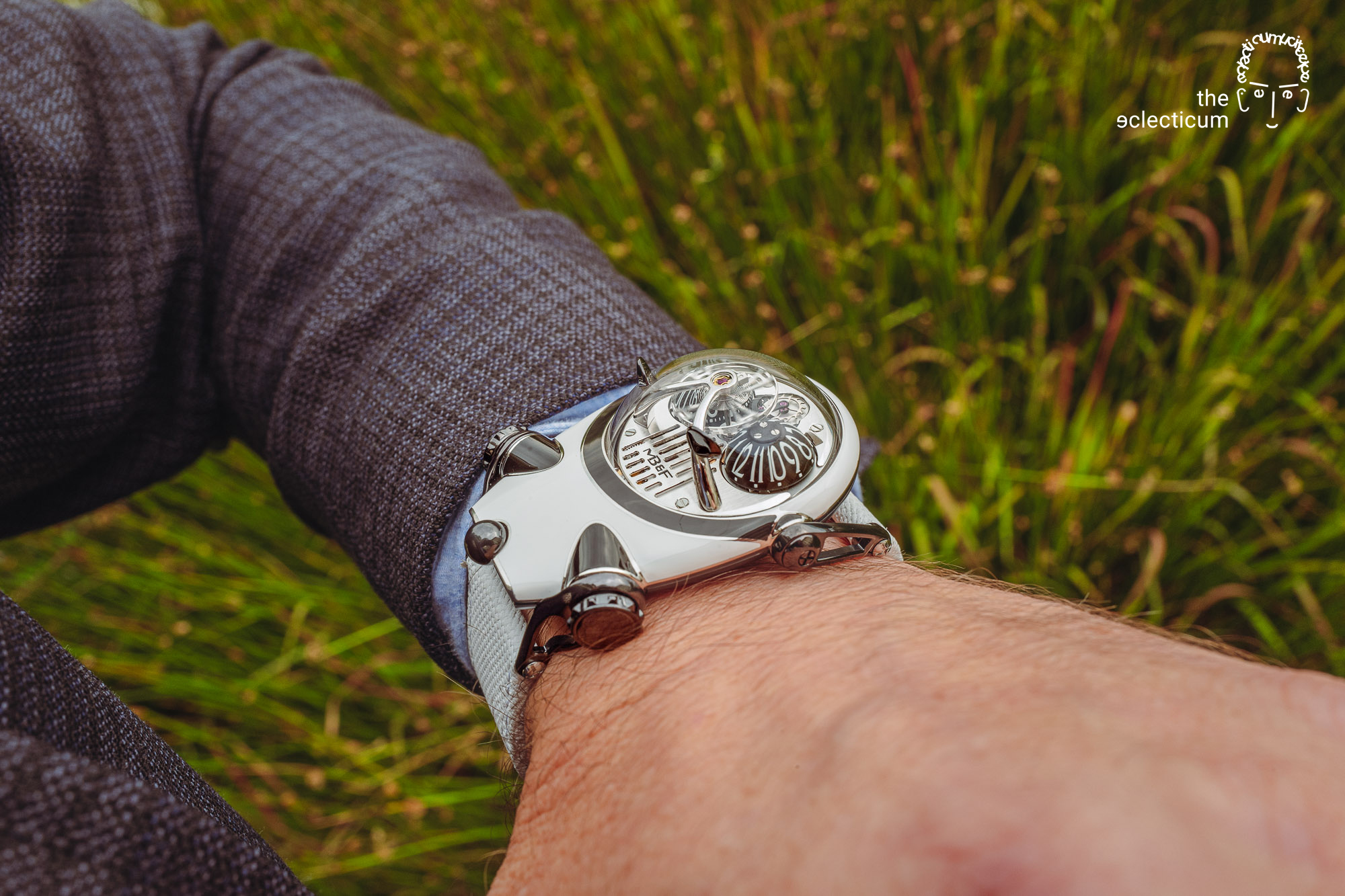 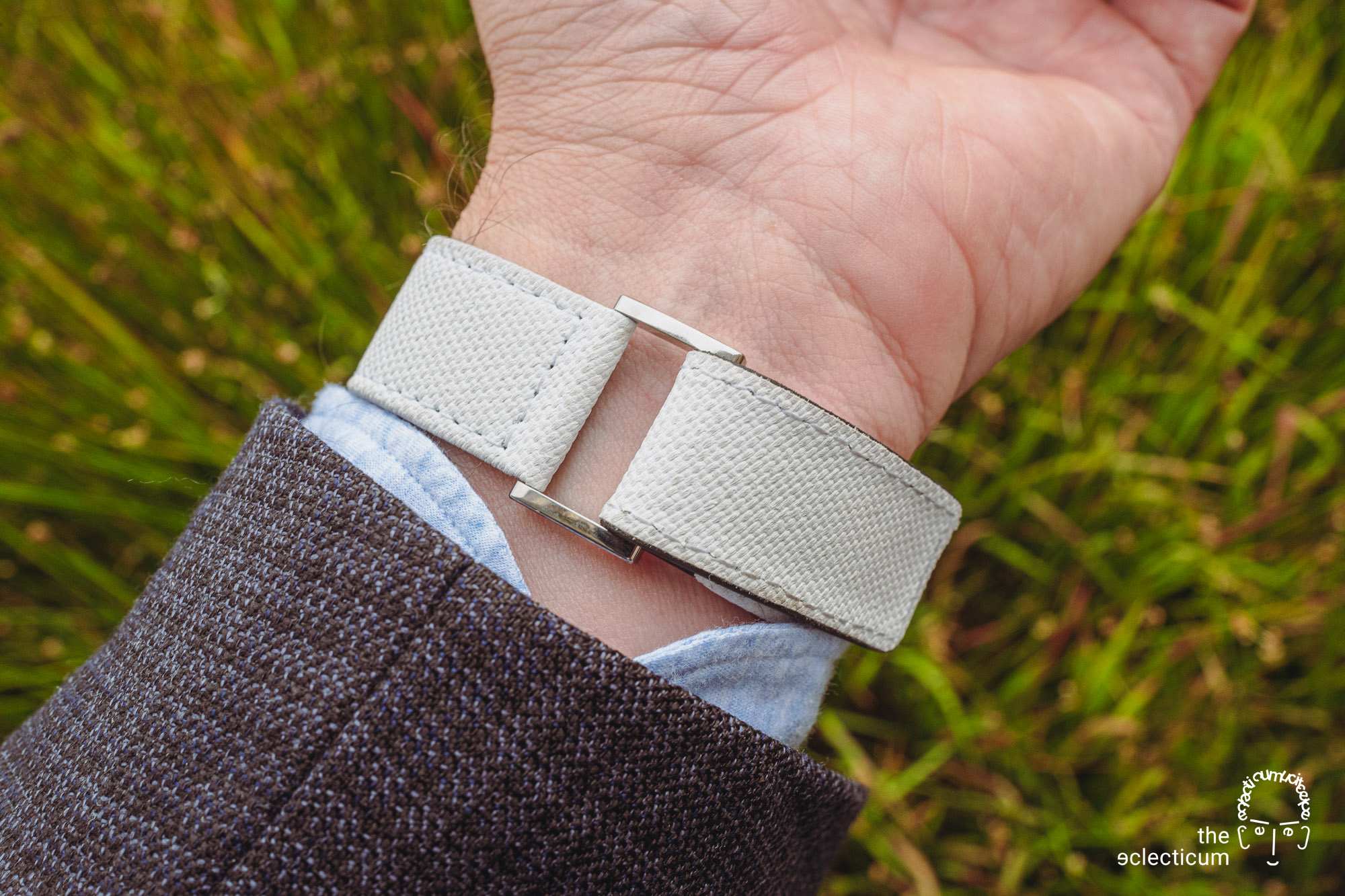 ABOUT THE ACCOMPANYING WORKS OF ART MB&F has been following Lee Yuen-Rapati’s horologically-inspired work for quite some time. Lee recently did a live drawing of an HM10 Bulldog poking its tongue out during a Zoom session with RedBar, which gave the MB&F team the idea to do a special collaboration for Only Watch. Lee has created several artworks to perfectly illustrate the HM10 Panda concept. “I have a panda resting on someone’s wrist, a panda lovingly cupped in a child’s hands, a panda lounging in a bamboo forest munching on a bamboo stick… I also created a short, four-panel narrative where the watch is a robotic panda that has been sent to explore another planet…this was one of those dream projects,” he says with a smile. Lee is best known for his playful, narrative-based illustrations and works with a combination of alcohol-based marker pens and specialty pens on textured paper. He studied interdisciplinary design at the Nova Scotia College of Art and Design University and then did a master’s in typeface design at the University of Reading in the United Kingdom. He is behind the @onehourwatch Instagram series of daily original watch drawings and provides illustration and typographic design work for various watchmakers and brands. 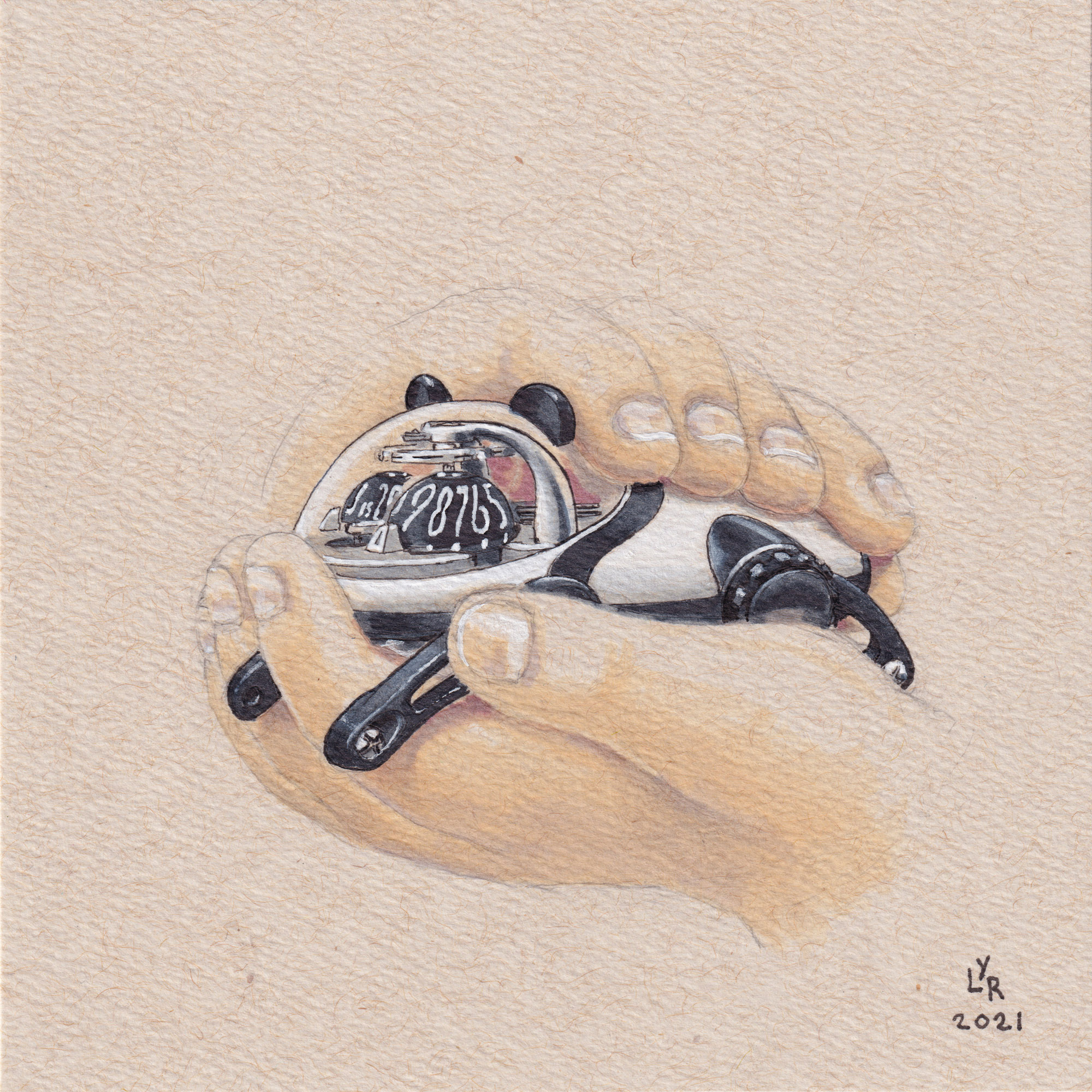 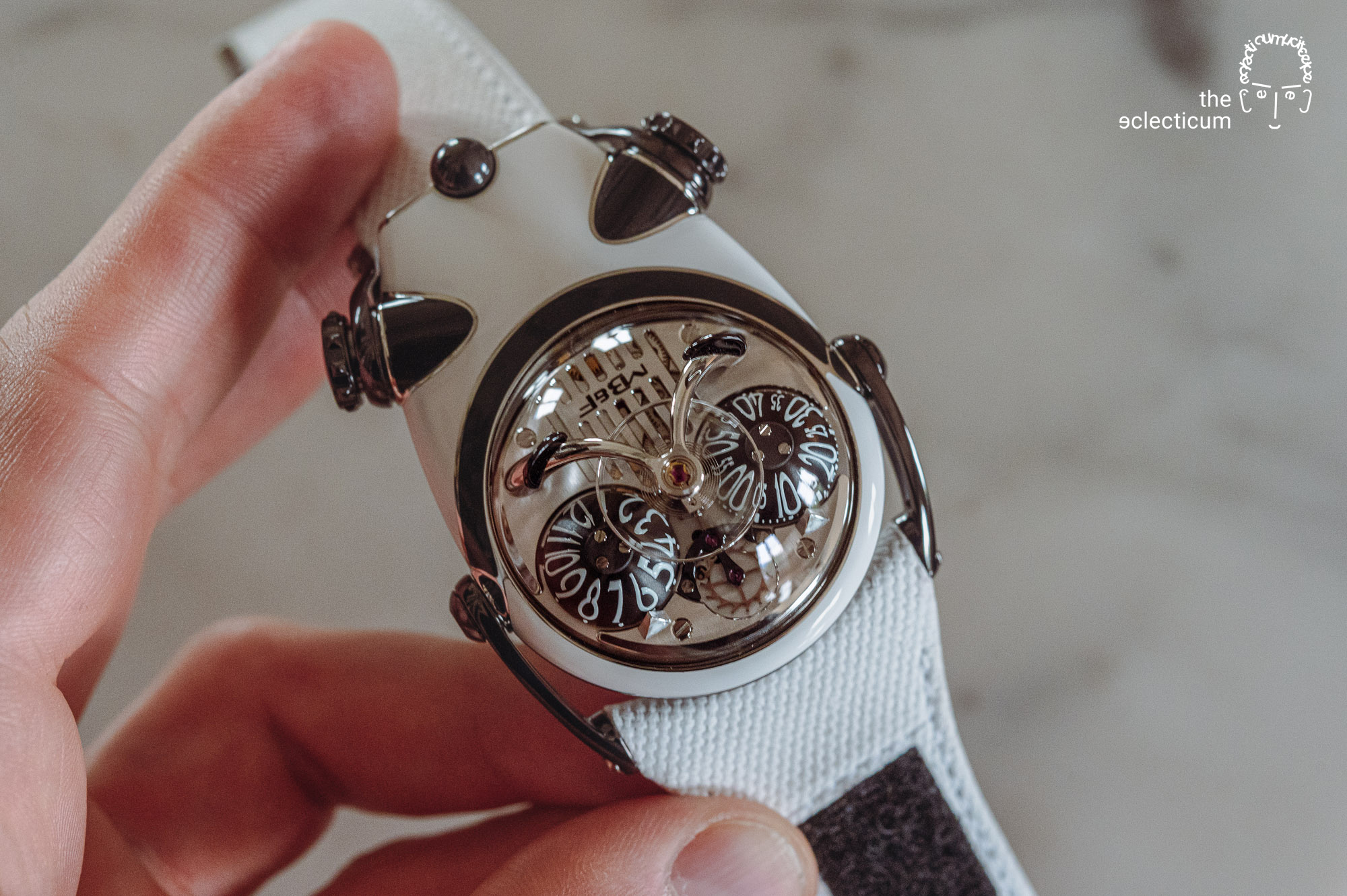 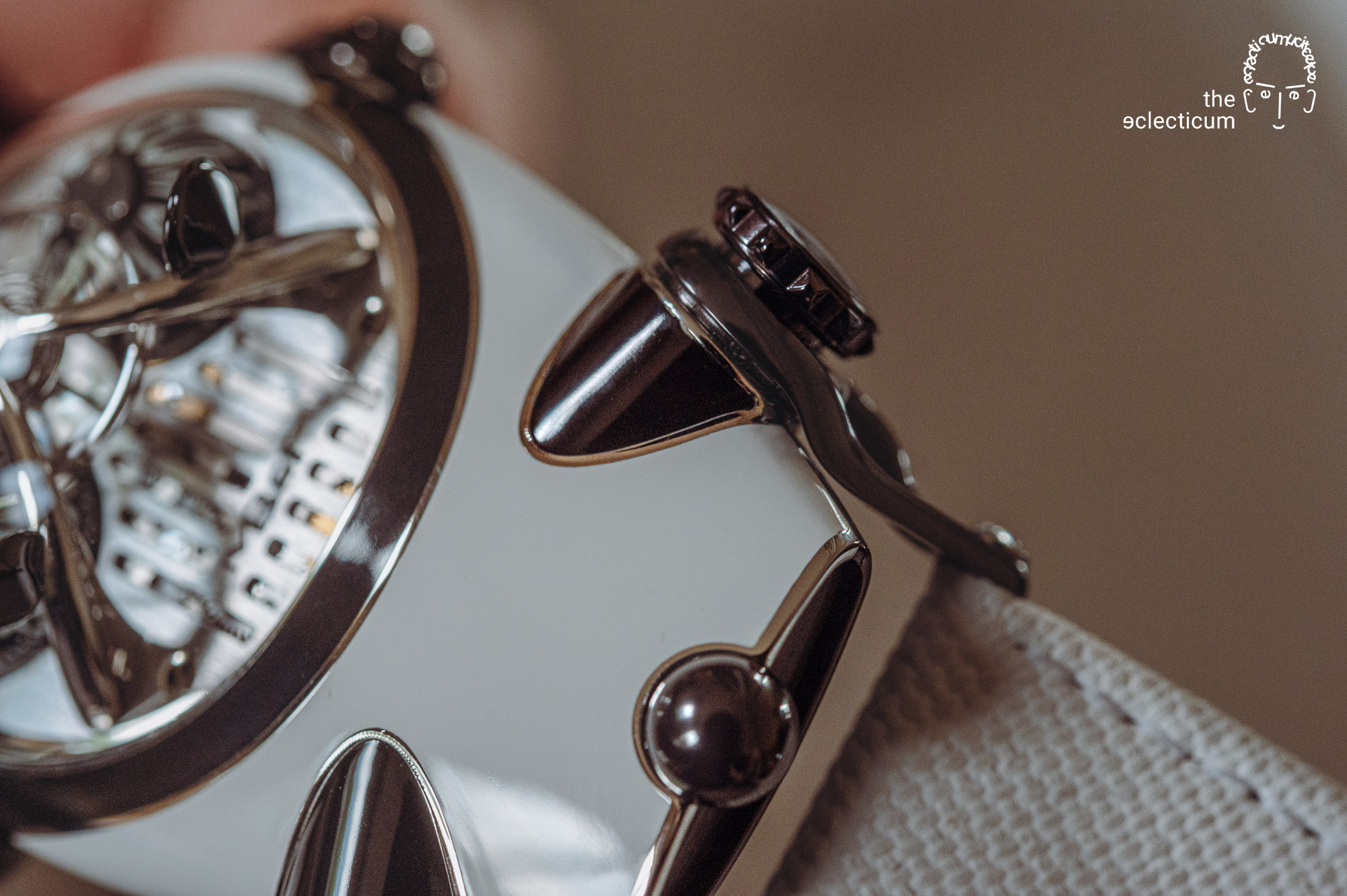 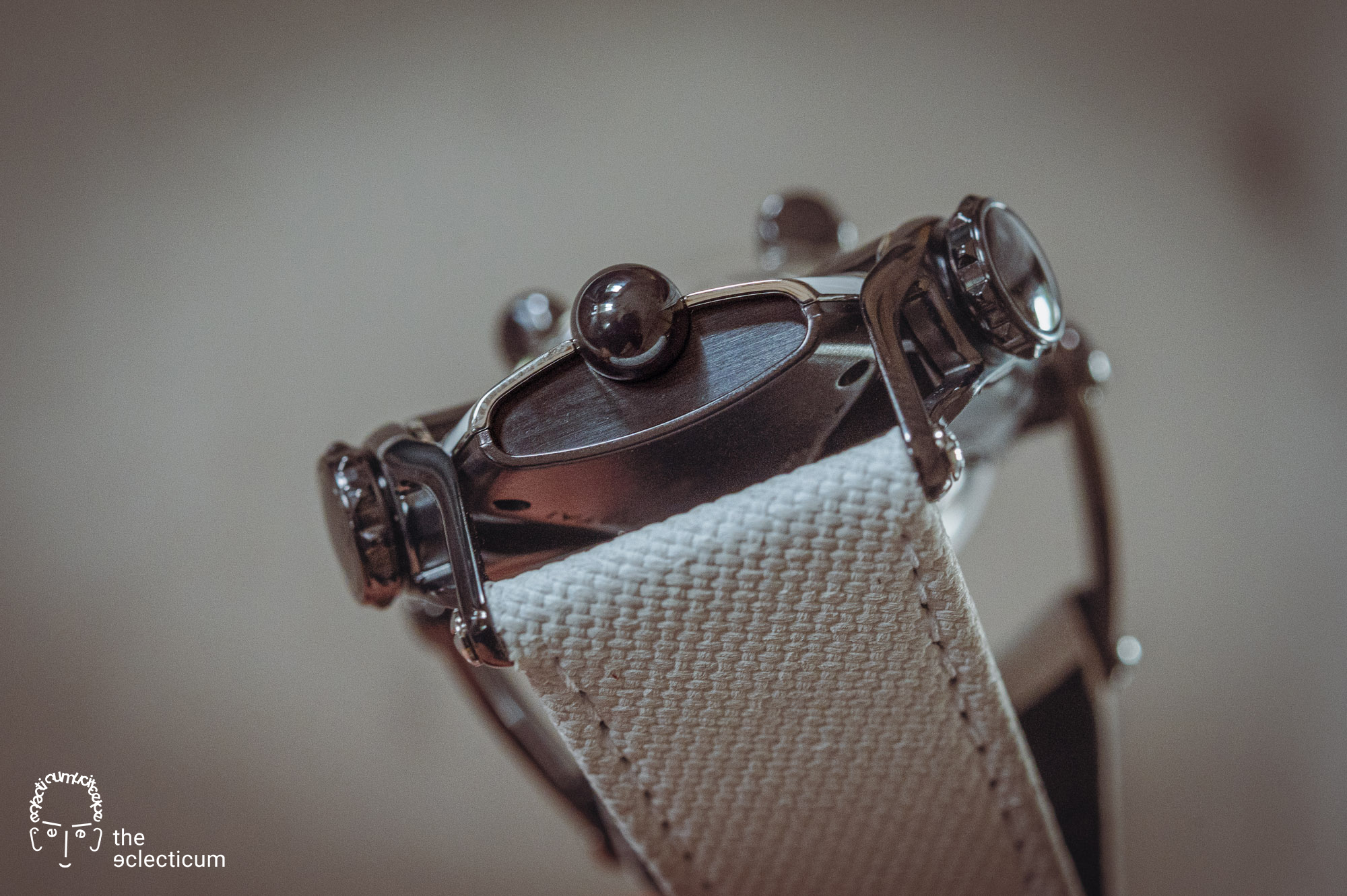 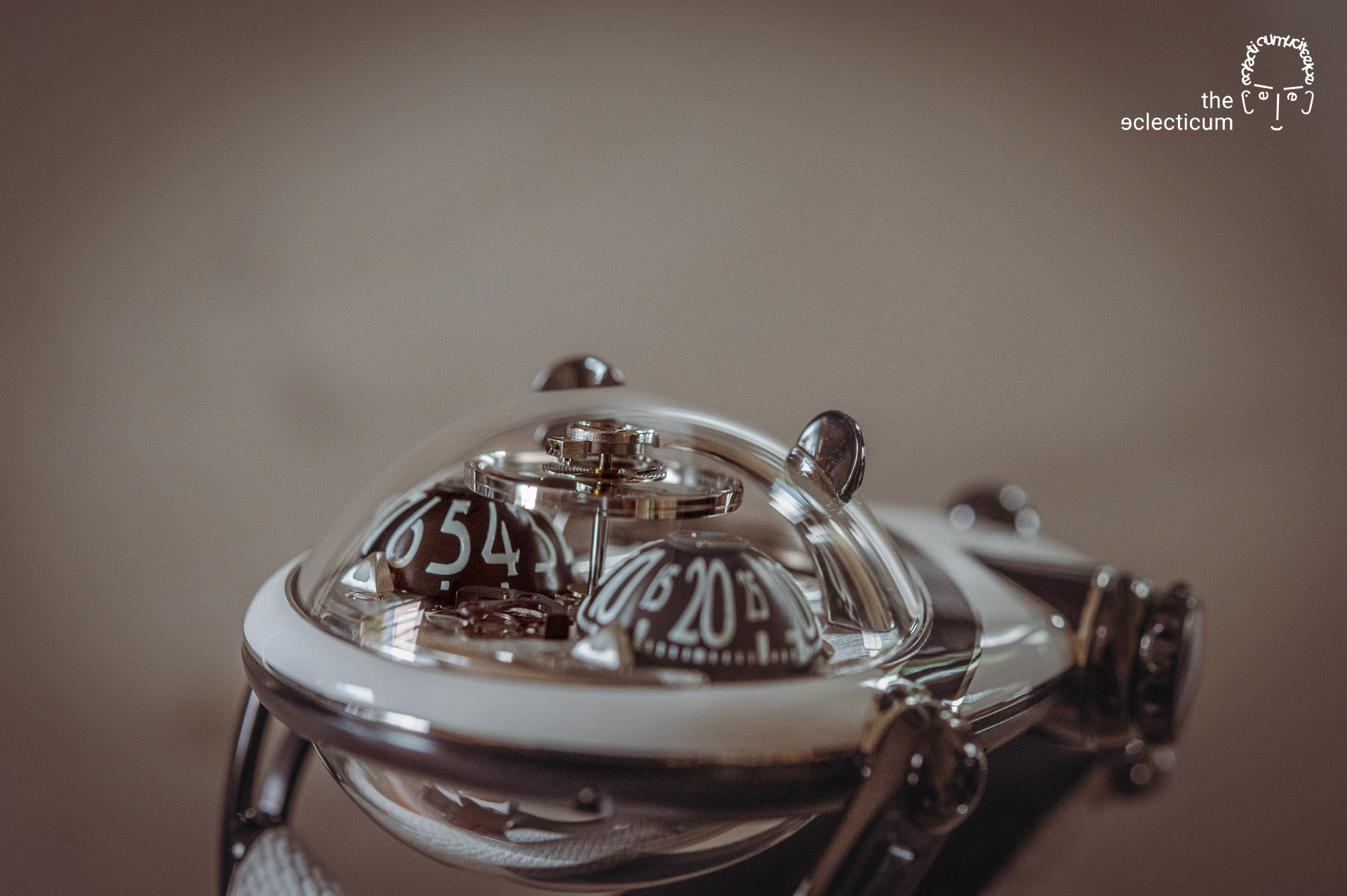 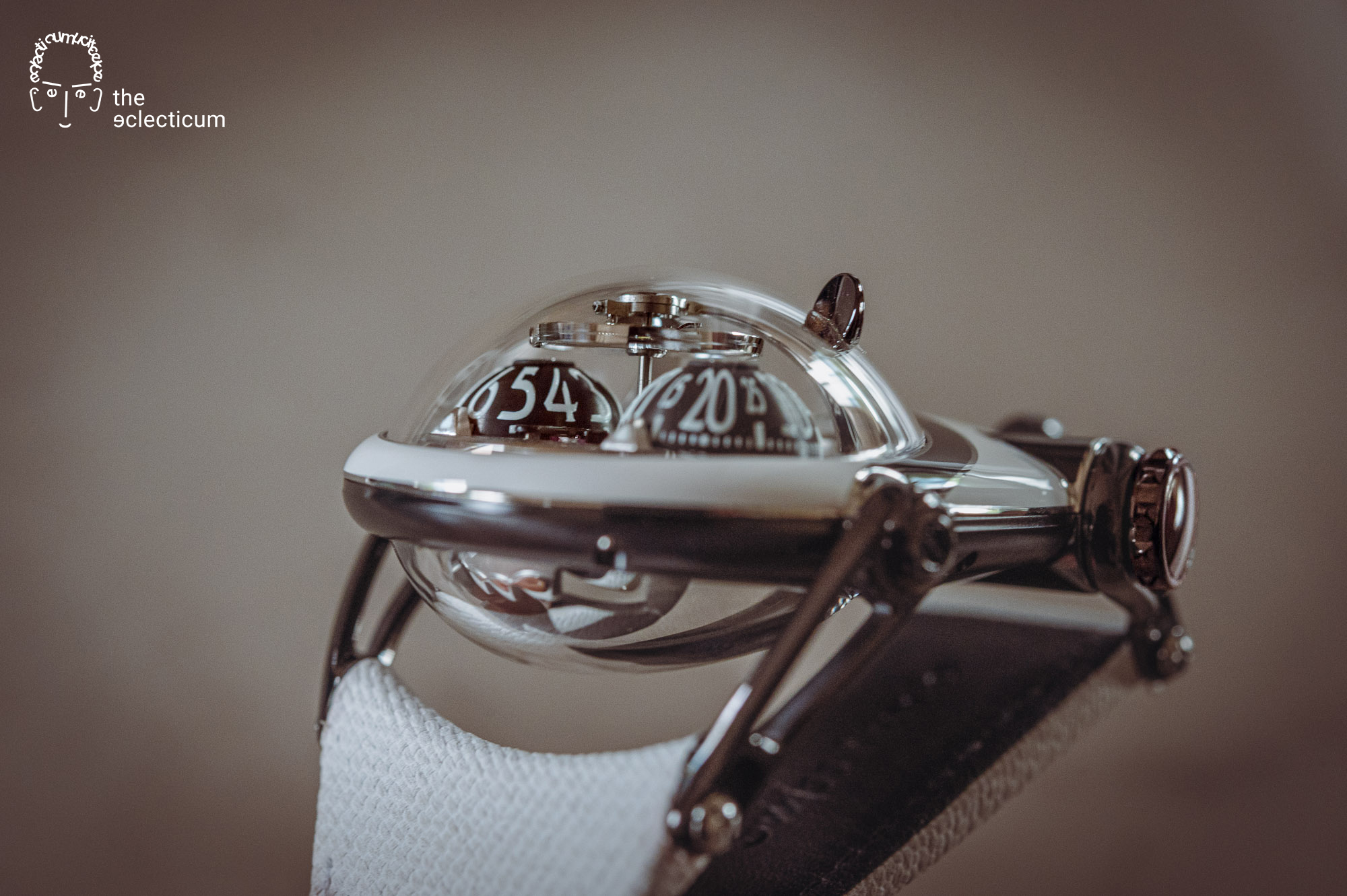 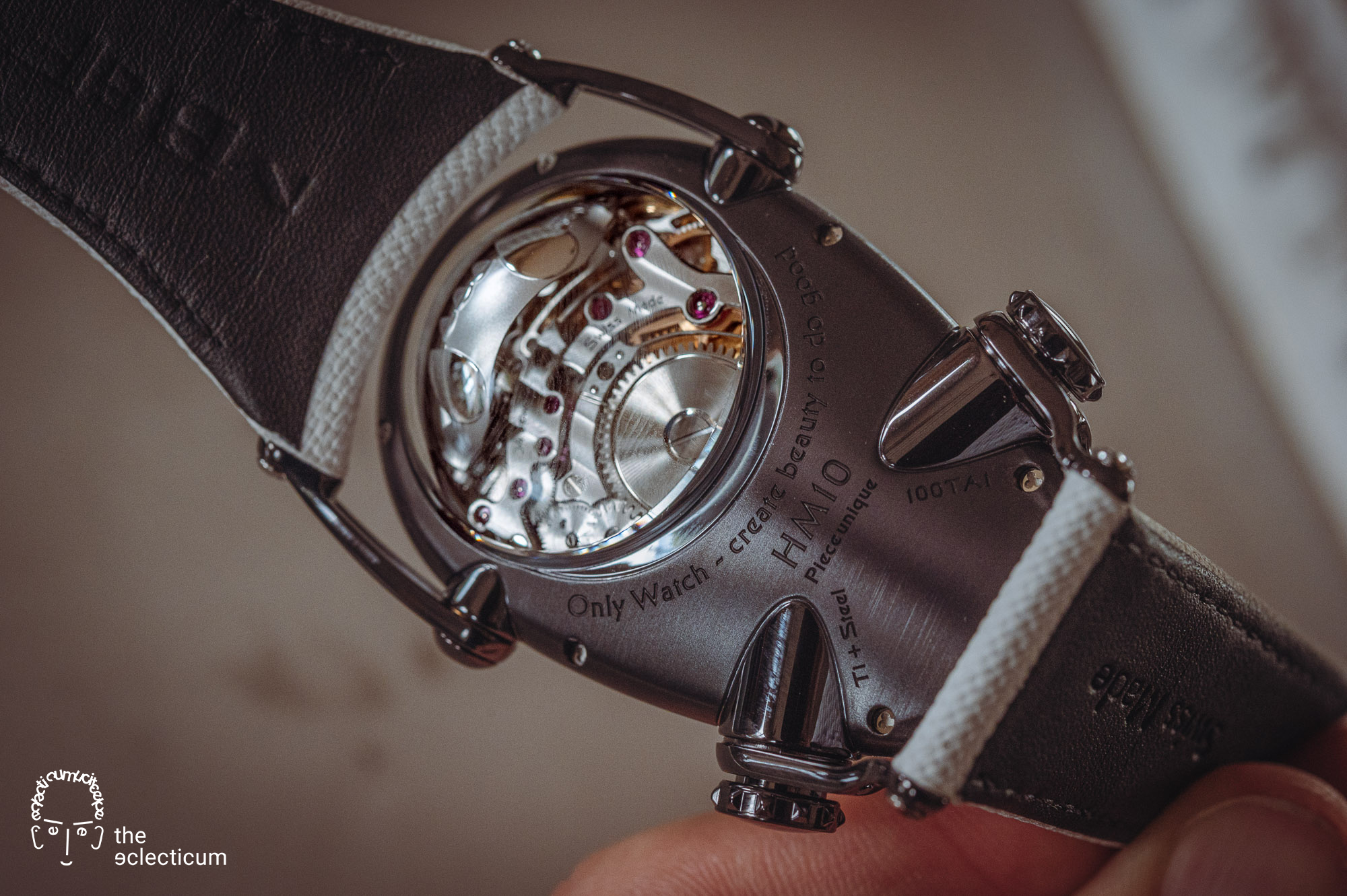 ABOUT HOROLOGICAL MACHINE N°10 The mechanics driving the HM10 Panda are exactly the same as the Horological Machine No 10 first introduced in 2020. Completely designed and developed in-house, the HM10 engine is the technical confluence of the various areas of movement expertise at MB&F, honed over years of experience. The eye-catching balance, suspended beneath the central sapphire crystal dome and beating at the traditional cadence of 2.5Hz (18,000vph), first appeared in an MB&F creation in 2011, with the debut of Legacy Machine N°1. Since then, this technically challenging mechanism has become a unique icon of MB&F, appearing in the majority of Legacy Machines, Horological Machine N°9, the HM10 Bulldog, and now the HM10 Panda. Powerful and startling, the revolving time-telling domes of HM10 Panda originated in the conical hour- and minute-modules of the first Horological Machine N°3, the creation that cemented MB&F’s reputation as a disruptive horological force. Subsequently, the cones took on rounded
forms in the HM3 ‘Frog’, but the one factor that remained constant was the urgent need to make them as light as possible, so that they placed minimal stress on the rest of the engine. Conventional milling processes were reworked and tolerances were sliced micro-fine in order to produce paper-thin aluminium components in three dimensions. These components later appeared again in Horological Machine N°6, this time paired with conical gearing to enable the highly precise display of time.
The 301-component HM10 engine is manual-winding, with a single barrel that imparts 45 hours of power reserve, indicated by the opening and shutting of external hinged jaws.

Whereas conventional examples of power-reserve display will aim for a simple hand indicator that consumes as little energy as possible, HM10 Panda has chosen to make a statement of strength with its impossible-to-miss display. Separate crowns are actuated for winding and time-setting, located towards the rear of the HM10 Panda body. 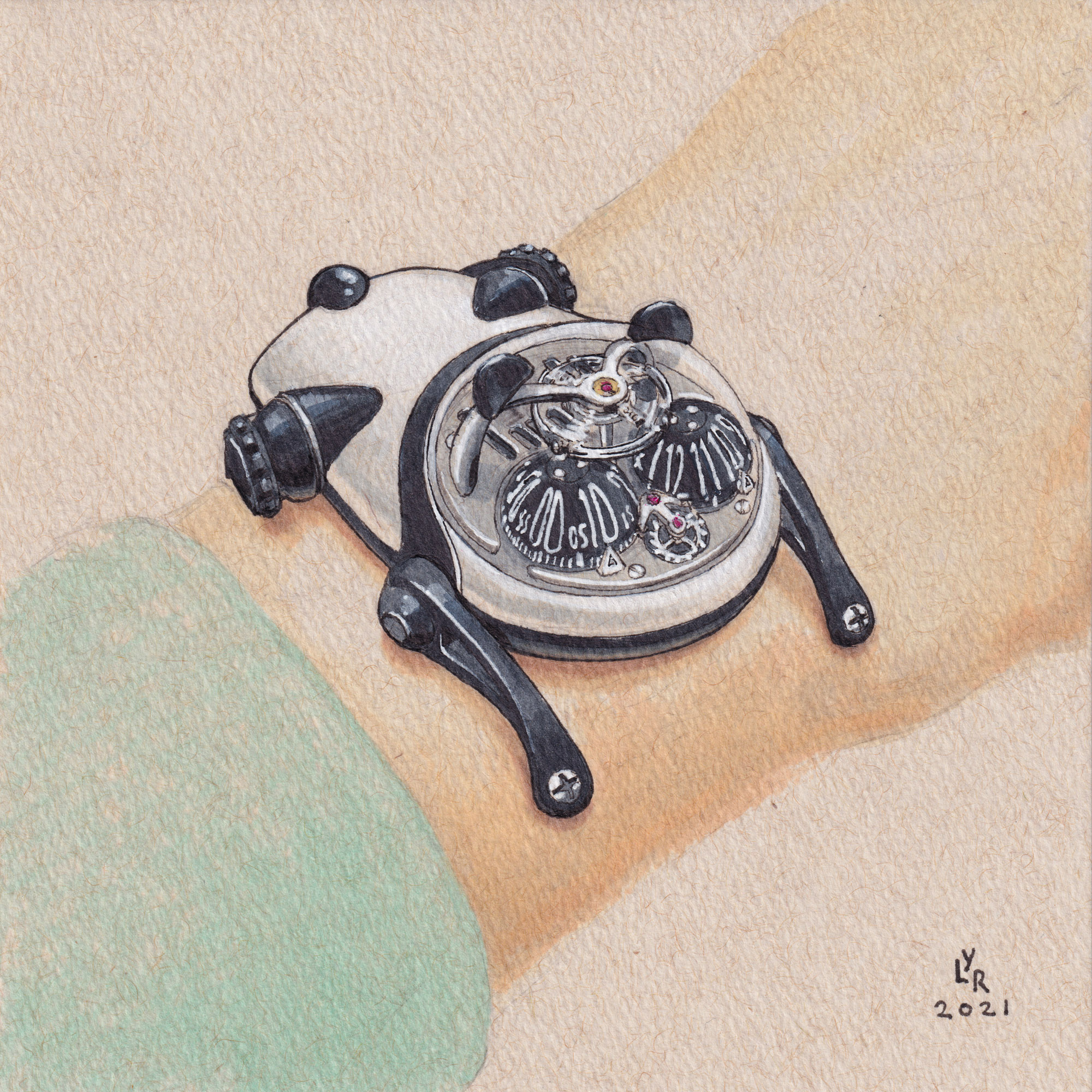 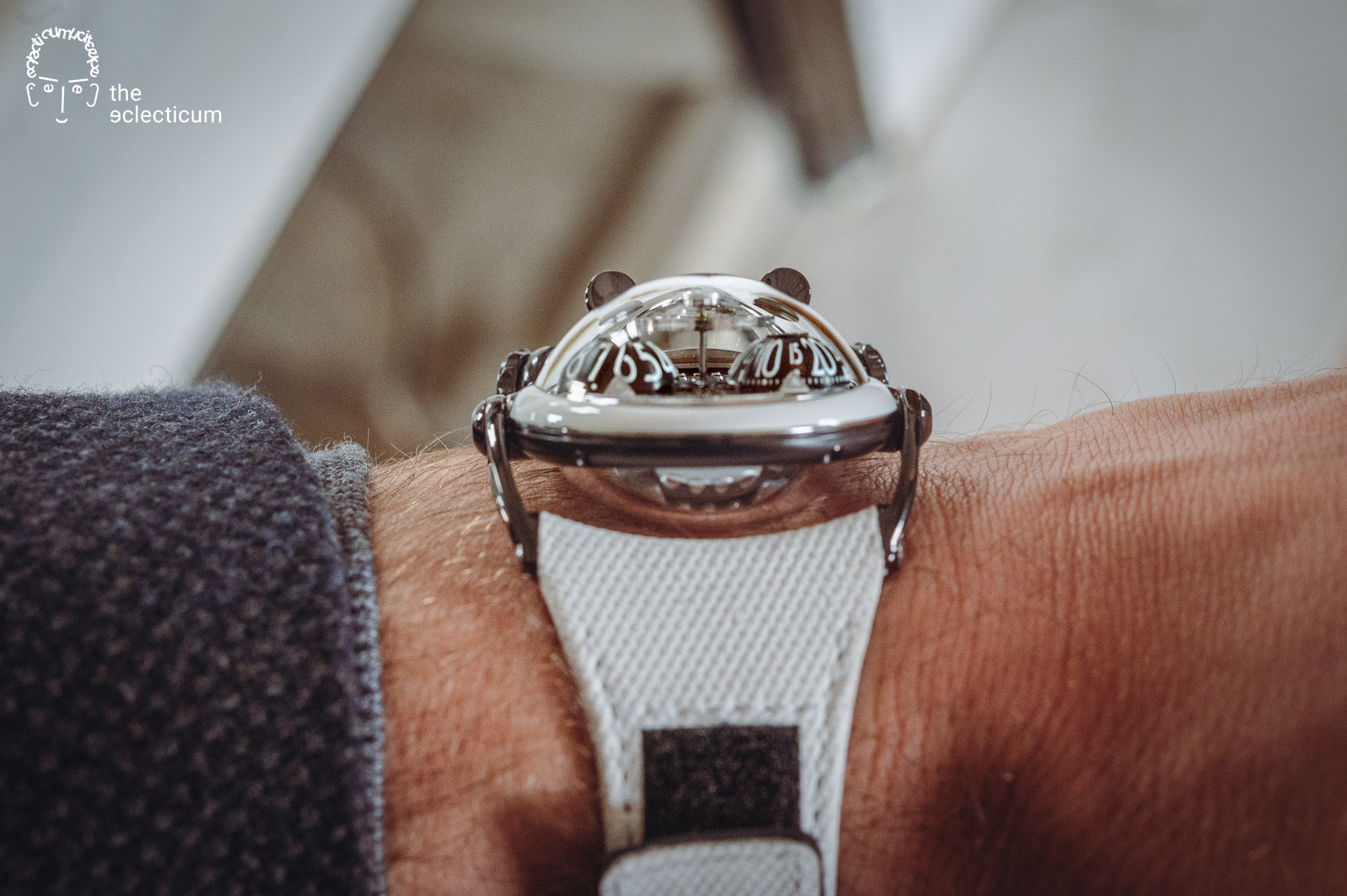 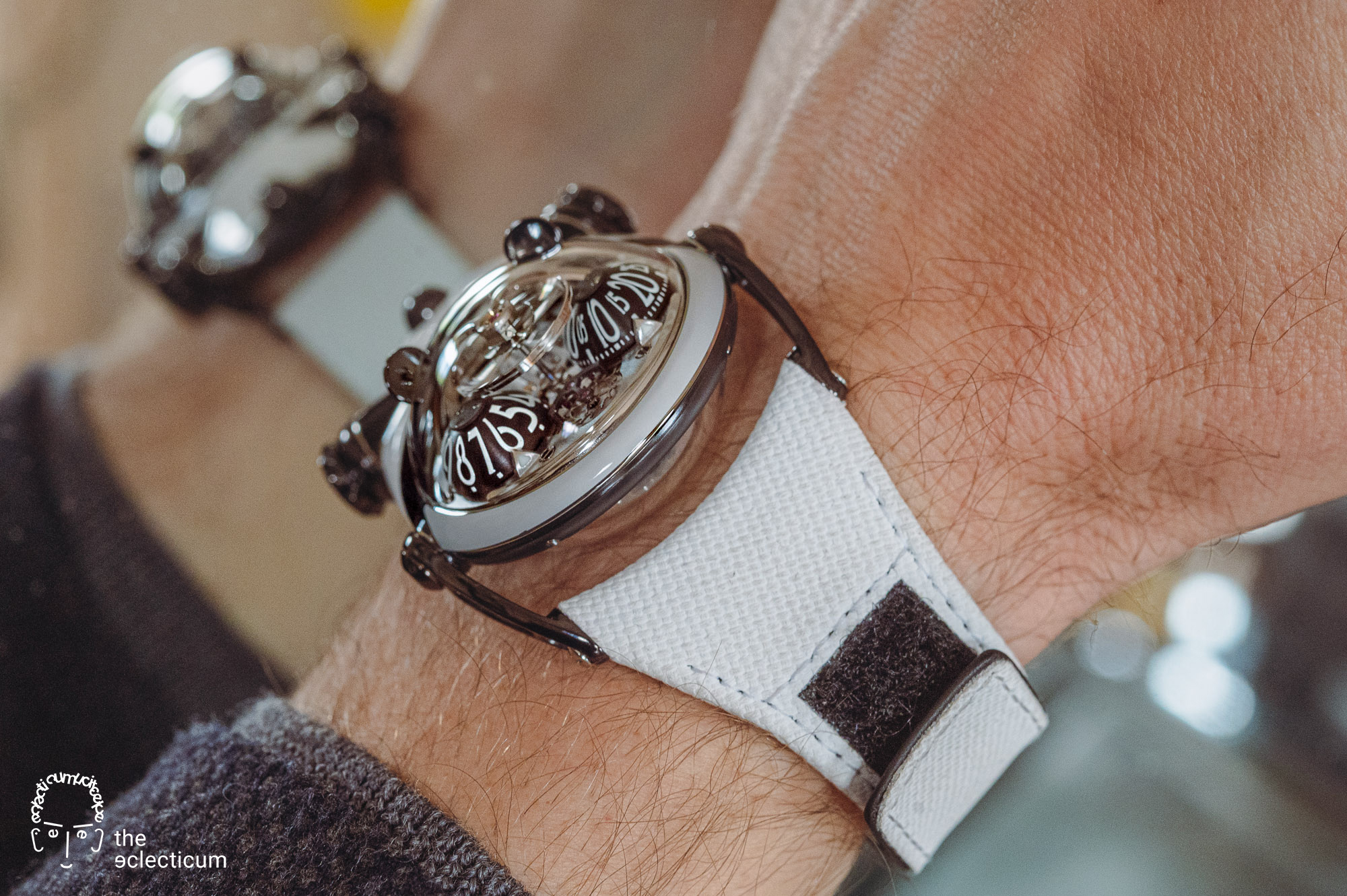 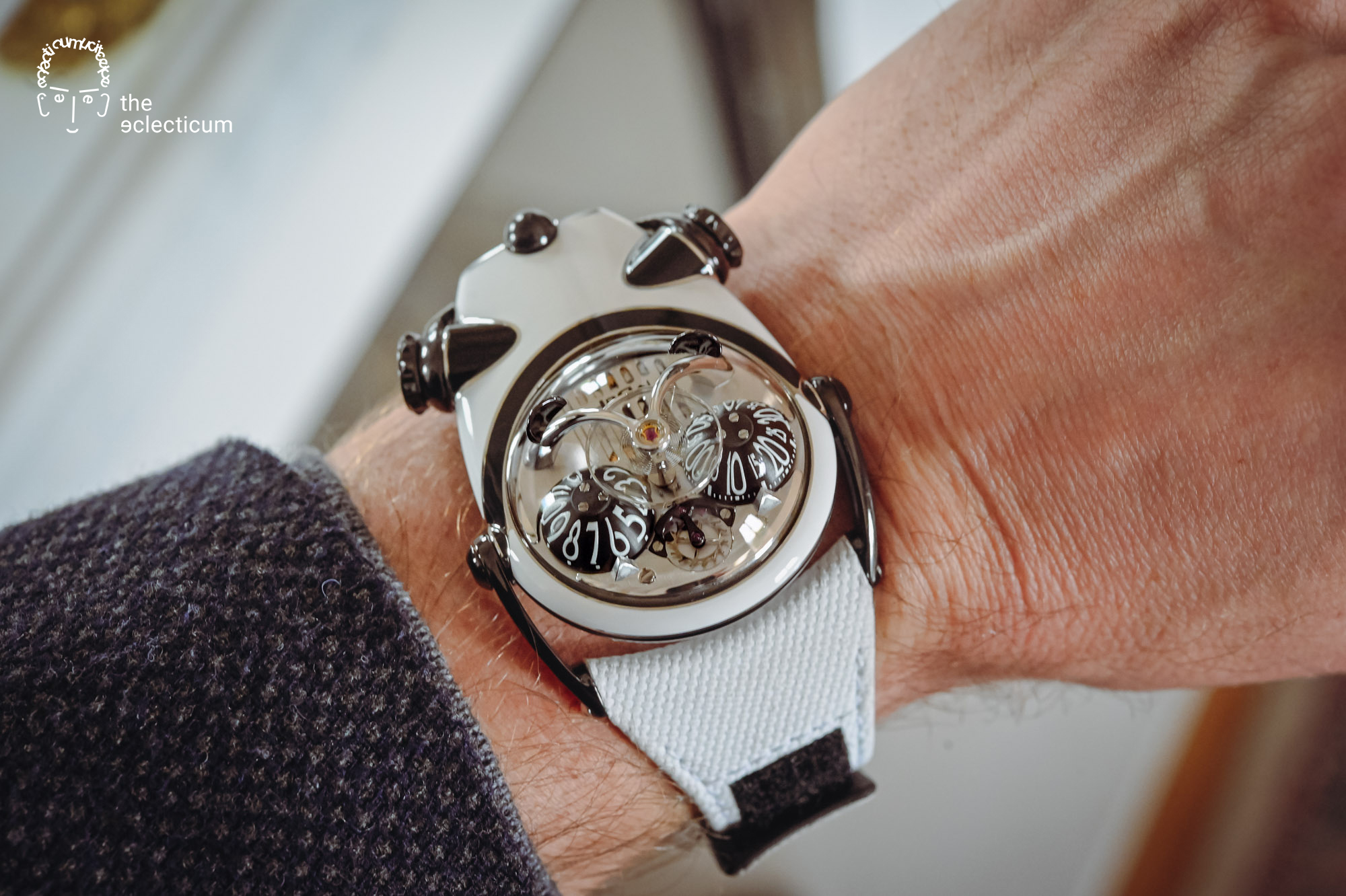 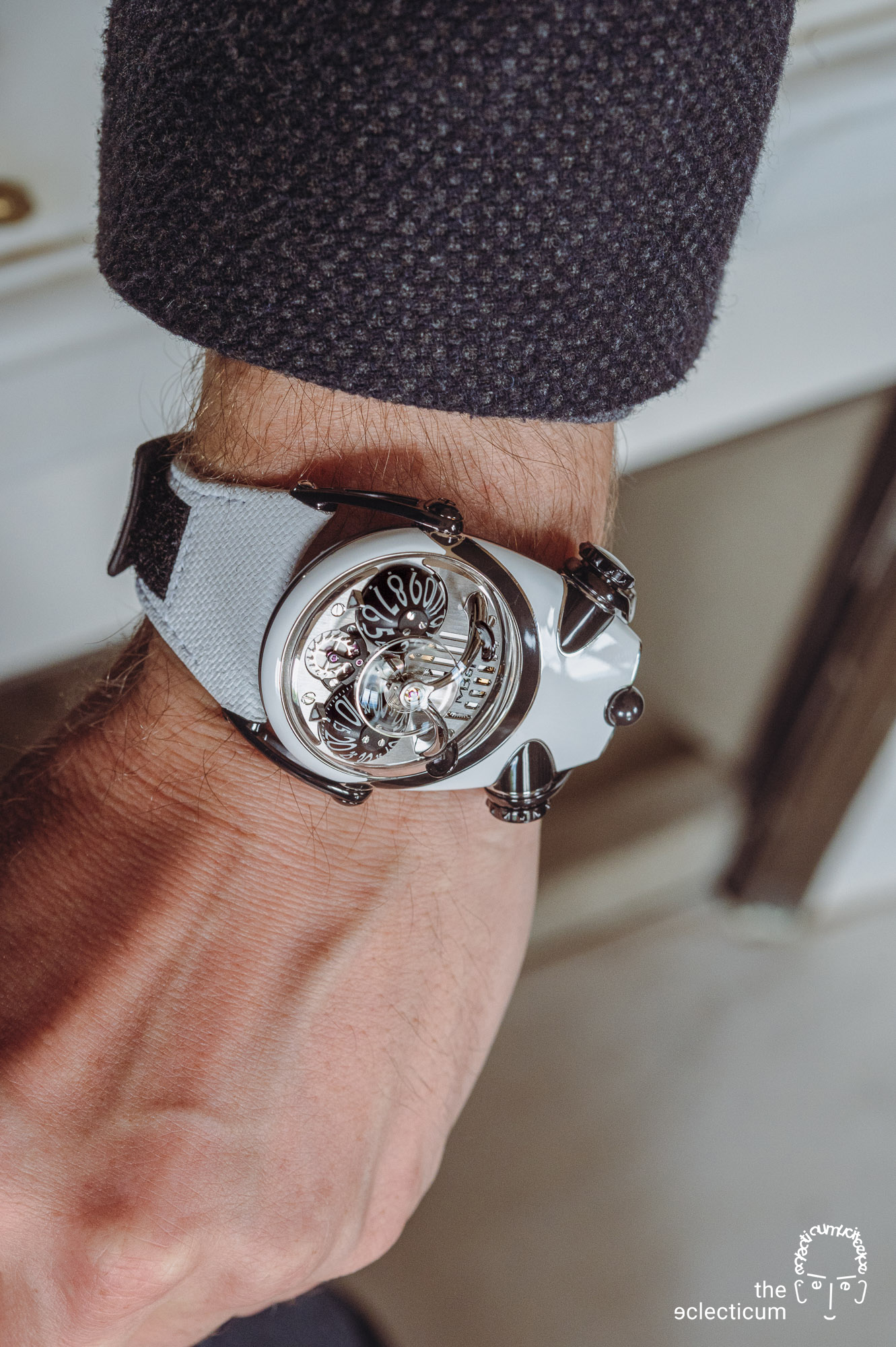 ONLY WATCH Established in 2005 and organised by the Association Monégasque contre les Myopathies under the patronage of HSH Prince Albert II of Monaco, Only Watch is a biennial auction specialising in one-of-a-kind timepieces. Ninety-nine per cent of funds raised go towards research in treating and curing neuromuscular diseases, in particular Duchenne Muscular Dystrophy. To date, the auction has raised over EUR 70 million, over eight editions. The 2021 edition of Only Watch will take place in Geneva on Saturday 6th November. Conditions permitting, the collection will depart for its world tour of around ten locations, beginning in Monaco from 22nd to 25th September at the Monaco Yacht Show, and ending with the auction when the watches will go under the hammer at Christie’s. HM10 PANDA FOR ONLY WATCH: TECHNICAL SPECIFICATIONS Distinctive feature: This one-of-a-kind HM10 Panda for Only Watch comes in a stainless steel and titanium case (the standard HM10 case is crafted in either titanium or red gold) and features unique panda bear details. It is accompanied by a series of illustrations created by multidisciplinary designer Lee Yuen-Rupati (@OneHourWatch).
Engine
Manual-winding in-house movement
Frequency: 2.5Hz (18,000bph)
Bespoke flying 14mm balance wheel with four traditional regulating screws floating above the
domed dials
Super-LumiNova on the hour and minute domes and markers
Single barrel with 45 hours of power reserve
301 components, 34 jewels
Left crown at 11 o’clock for winding; right crown at 1 o’clock for setting the time
Functions/indications
Hours on left dome (aluminium dome rotating in 12 hours)
Minutes on right dome (aluminium dome rotating in 60 minutes)
Power reserve indicated in 3D by the opening and closing of the panda’s teeth (end of power
reserve = closed jaws)
Case
Top section: stainless steel, with 5 pockets of black lacquer and 2 pockets of white lacquer (each
with 3 layers of colour and 7 layers of varnish).
Bottom section: Grade 5 titanium, with Preci-Coat matt black PVD. Specially engraved with Only
Watch signature: “Only Watch – create beauty to do good”.
Lugs: Grade 5 titanium with Preci-Coat matt black PVD.
Ears: Grade 5 titanium, fused to the sapphire crystal dome with Asulab bonding.
Tail: Ceramic (Grade 5 silicon nitride sphere)
Dimensions: 54mm x 45mm x 24mm
Water resistant to 5ATM / 50m / 160ft
Sapphire crystals
Both sapphire crystals treated with anti-reflective coating on both faces.
Strap & buckle
Hand-stitched black and white strap with one side in black and the other in white.

In and around Geneva Watch Days 2021 – when context and news have (somehow)...