Gold Dust: Into the weekend in a dolce vita mood – enjoying summer with the Bvlgari Diagono Scuba

Only the Italians manage to blend elegance with brutalist elements in such an effortless style - the Bvlgari Diagono Scuba, a perfect summer watch

It is a bit of an unusual watch to see at ‘the eclecticum’ that I’d like to feature in this post: the Bvlgari Diagono Scuba is at first view perhaps totally outside one’s radar – a pity I must say! 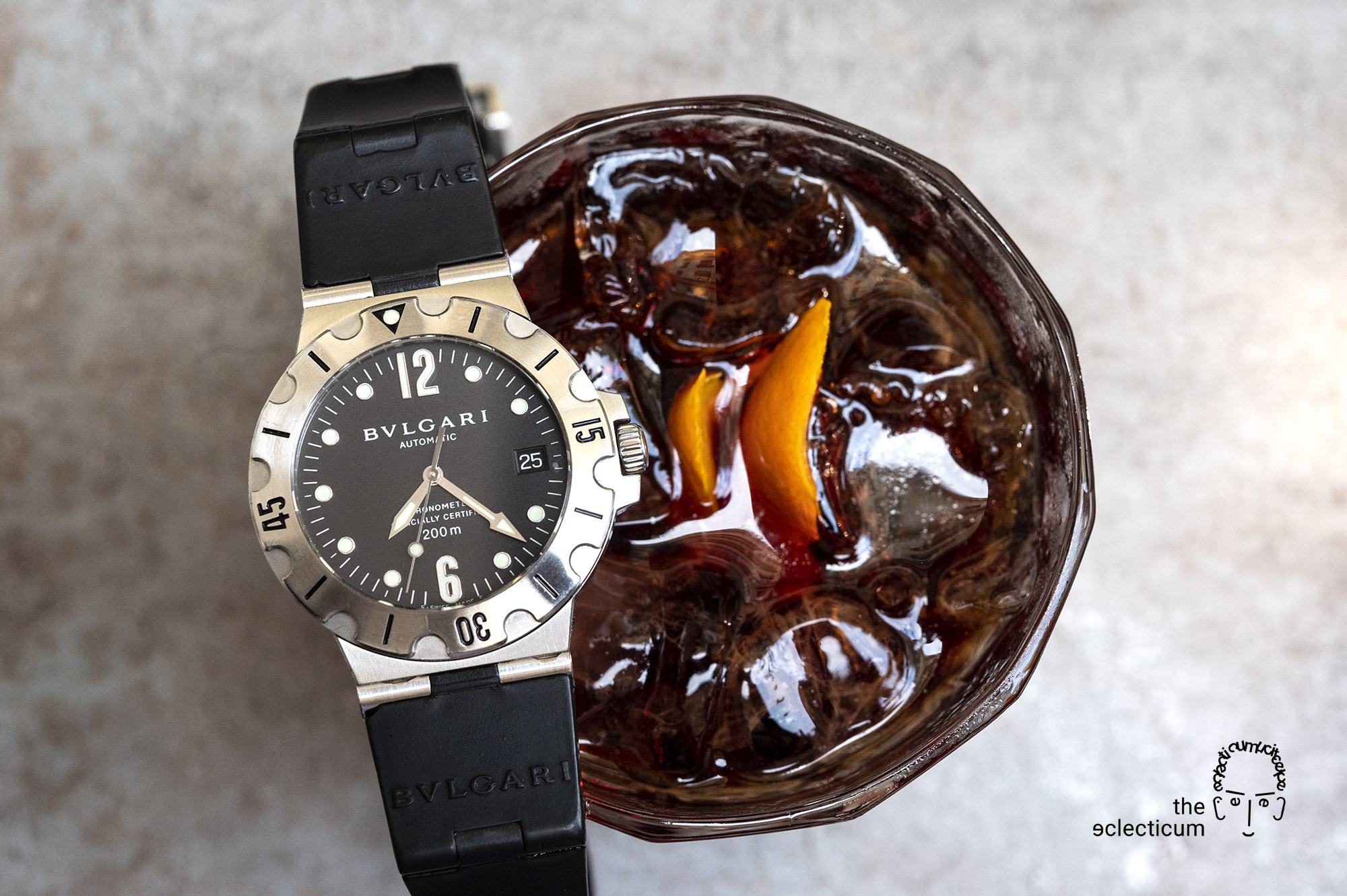 I was in search of a ‘beach watch’ (sounds strange as I rarely spend time there), a watch with well-considered stylish aesthetics, solid mechanics and a rugged enough ‘forget about it’ construction. A watch with character that I would wear comfortably while hiking, at a party as well as at vernissage, that I would not have to worry about but one that offered a bit more substance than a Swatch (which would fulfill above criteria as well).

My search ended with a Bvlgari Diagono Scuba, a watch that ticked all the boxes. 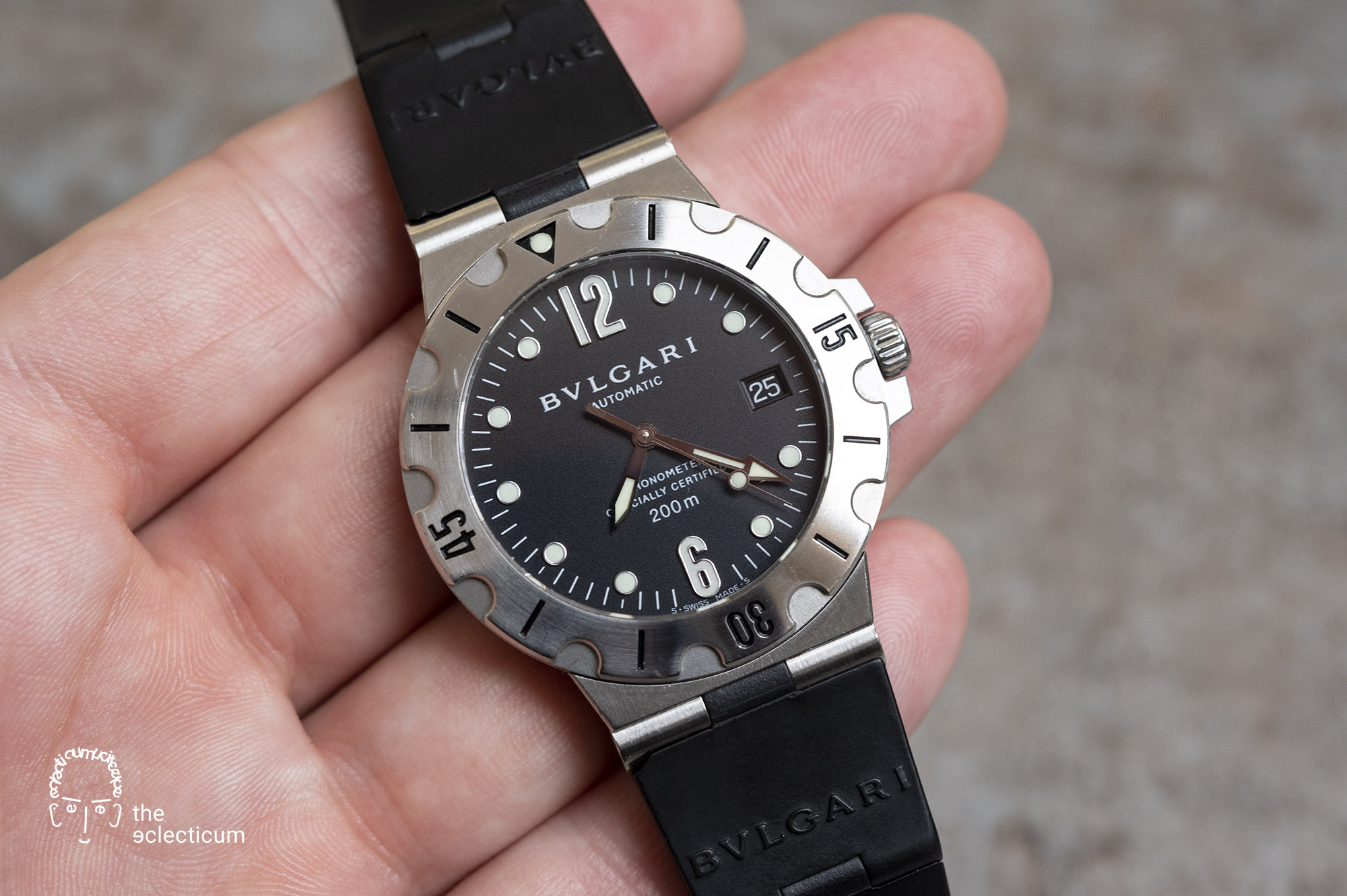 On paper, this is a rather mundane watch, but not totally without interest: I scored the older version SD38S, presented in 1994, which is a 38mm stainless steel diver’s version of the Diagono line of watches, water resistant to 200m, equipped with a COSC-certified ETA 2892A automatic movement.

In later versions, Bvlgari has revised case size, up to 41mm, and slightly tweaked the design, and they also have fitted their own, manufacture Cal. BVL 191 automatic movement. It has essentially the same specs as the ETA and a offers similar degree of finishing.

A Masterpiece of (Italian) Brutalism

I suggest that its essence is not what the spec sheets says, it is the complete package what counts – the specs are just the (functionally more than adequate) base. Let’s take a closer look: what immediately catches your attention are two, maybe three elements: the boldly notched unidirectional bezel (which surprisingly has 120 clicks), the pivoted tube lugs accepting only proprietary straps, and the rather strange looking rubber strap. 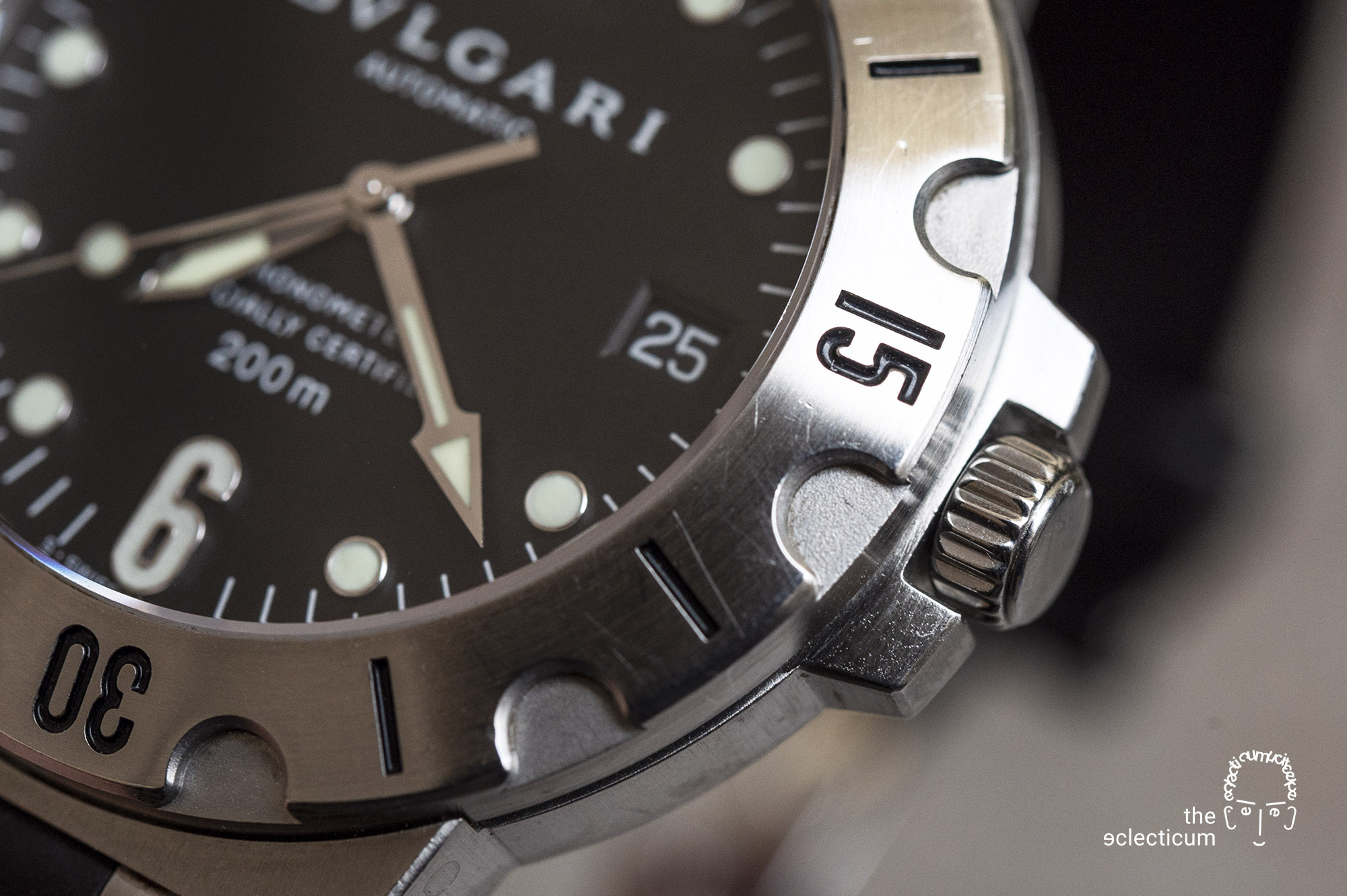 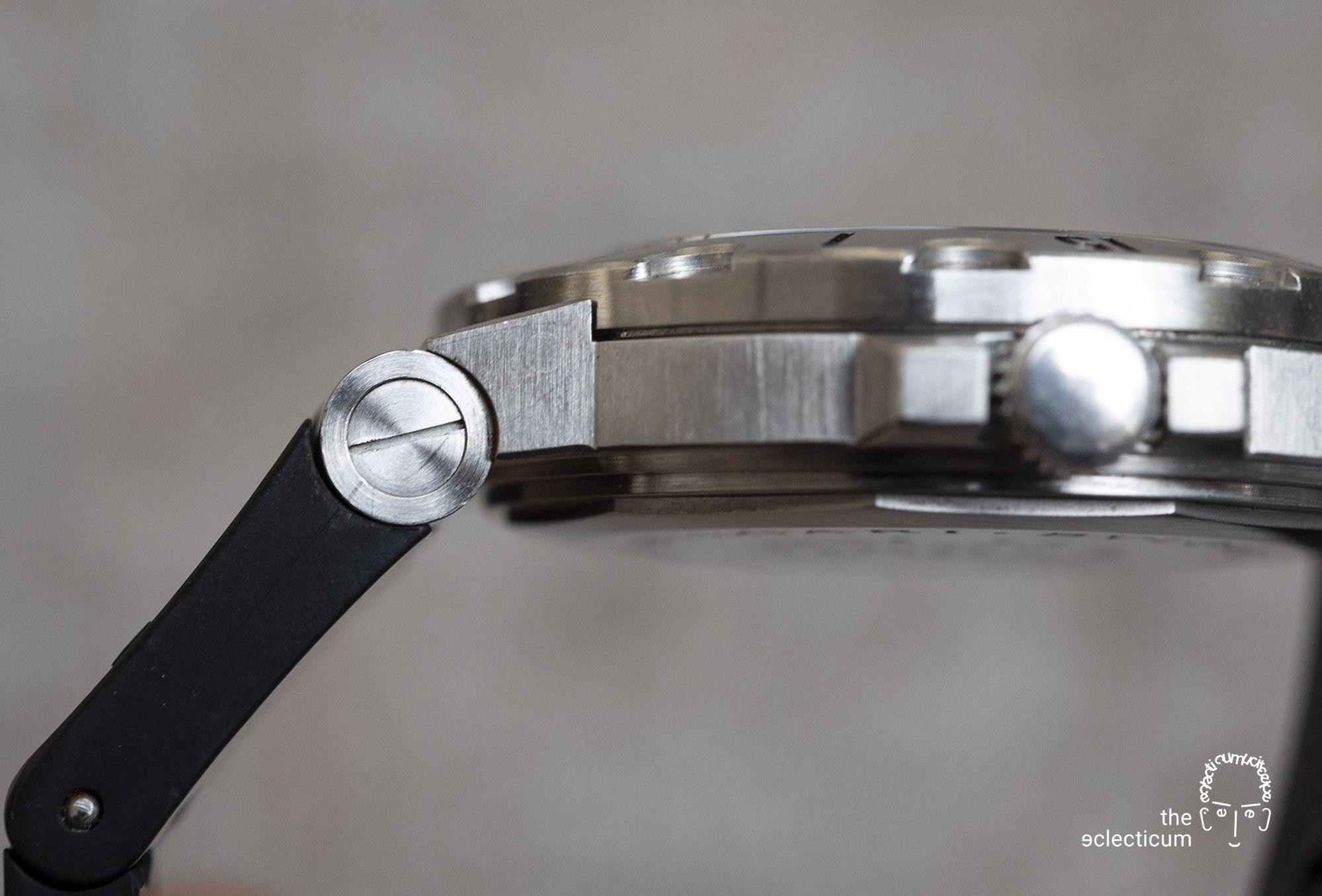 The case elements are a masterpiece in my view: very solid, extremely well machined down to the case back, yet with an air of elegance and well-composed arrangement. The beauty here really is in the detail as well, just take a close look at the finishing of a superficially quite utilitarian design. 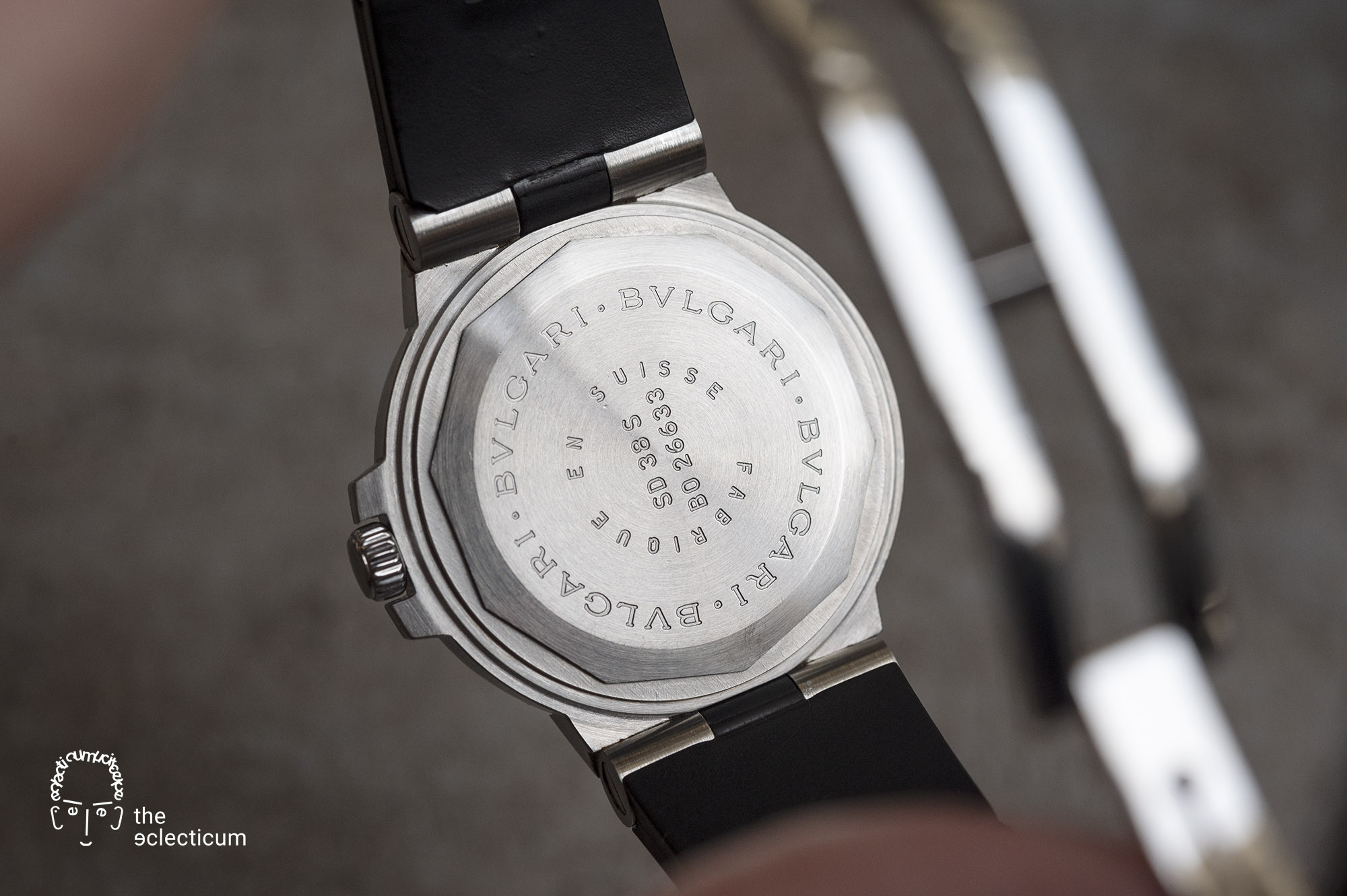 Side note: the design of the Bvlgari Diagono Scuba reminds me on the finest examples of Italian Brutalism Archicture, a socially progressive style developed in the early second half of the 20th century which emphasised a ‘honesty’ in construction by blending the structure and the (mostly bold) shapes of a building, its materials used (with a focus on concrete) and the texture of its surfaces into a holistic entity. Brutalist architecture includes the Unité d’Habitation in Marseilles by Le Corbusier in the late 1940s, the Barbican in London or the Wotruba Church in Vienna. 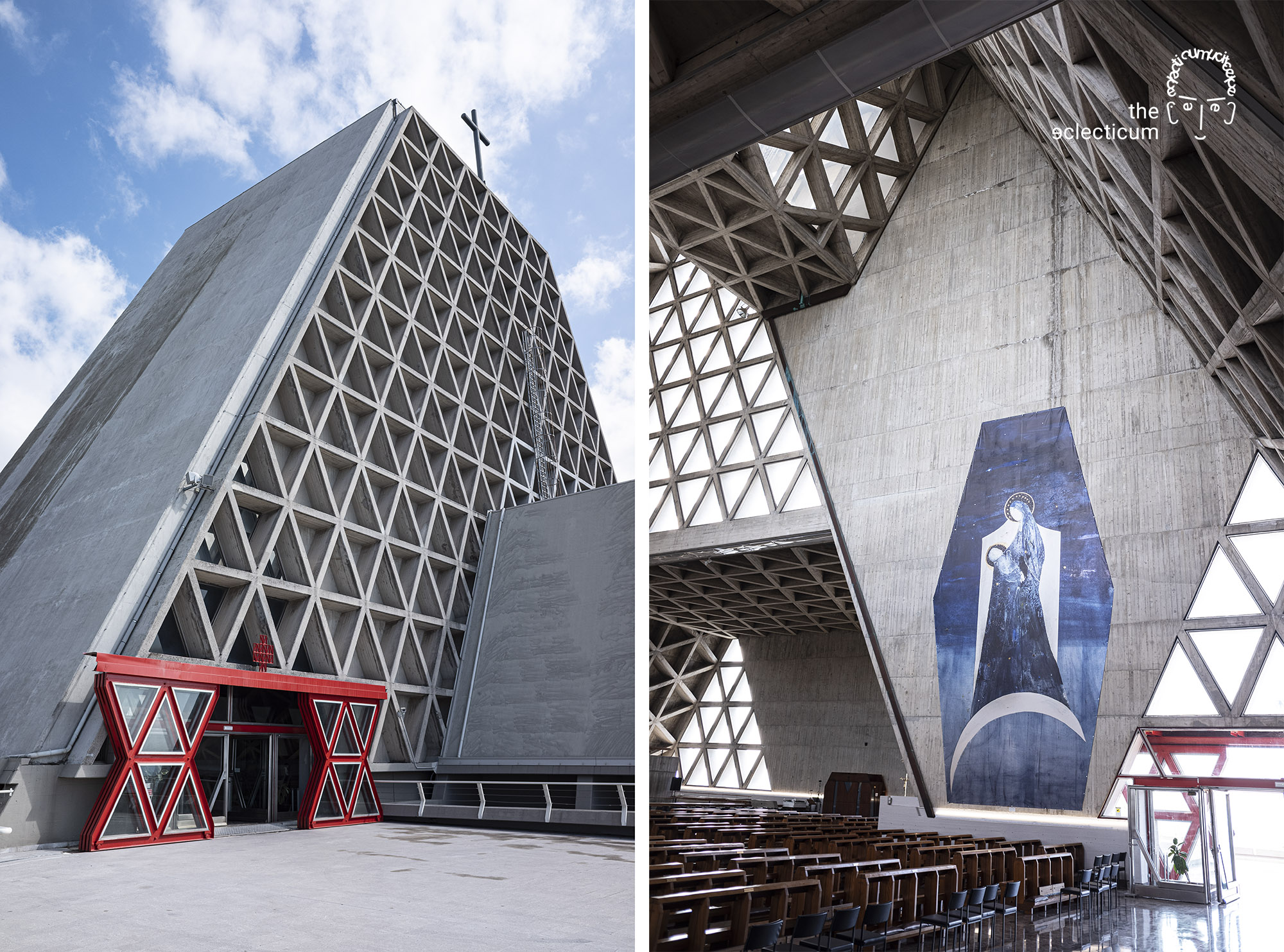 (Example of Italian Brutalist architecture:  Temple of Monte Grisa in Trieste (1963 – 1965), archtitect: Antonio Guacci) While the archticture always stood remarkably out of their surroundings, the Brutalist style aimed to consider the specific geological and climatic conditions of their enviroments. This is why its ‘Italian’ variant has finer, cleaner elements.

It you look at the Diagono Scuba again with a ‘brutalist’ eye you’ll surely find many elements there as well – boldness yet still refined, the prominence of surface texture and the exposure of the case material stainless steel.

The multiple-part rubber strap is the oddest element of watch, and quite frankly the one I like the least. Yet, it has its place in the overall aesthetics as it counterbalances the boldness of the case with its dark colour and the pronounced elements. On a wider wrist however it might be a bit too much – remember, the case has a 38mm diameter only. 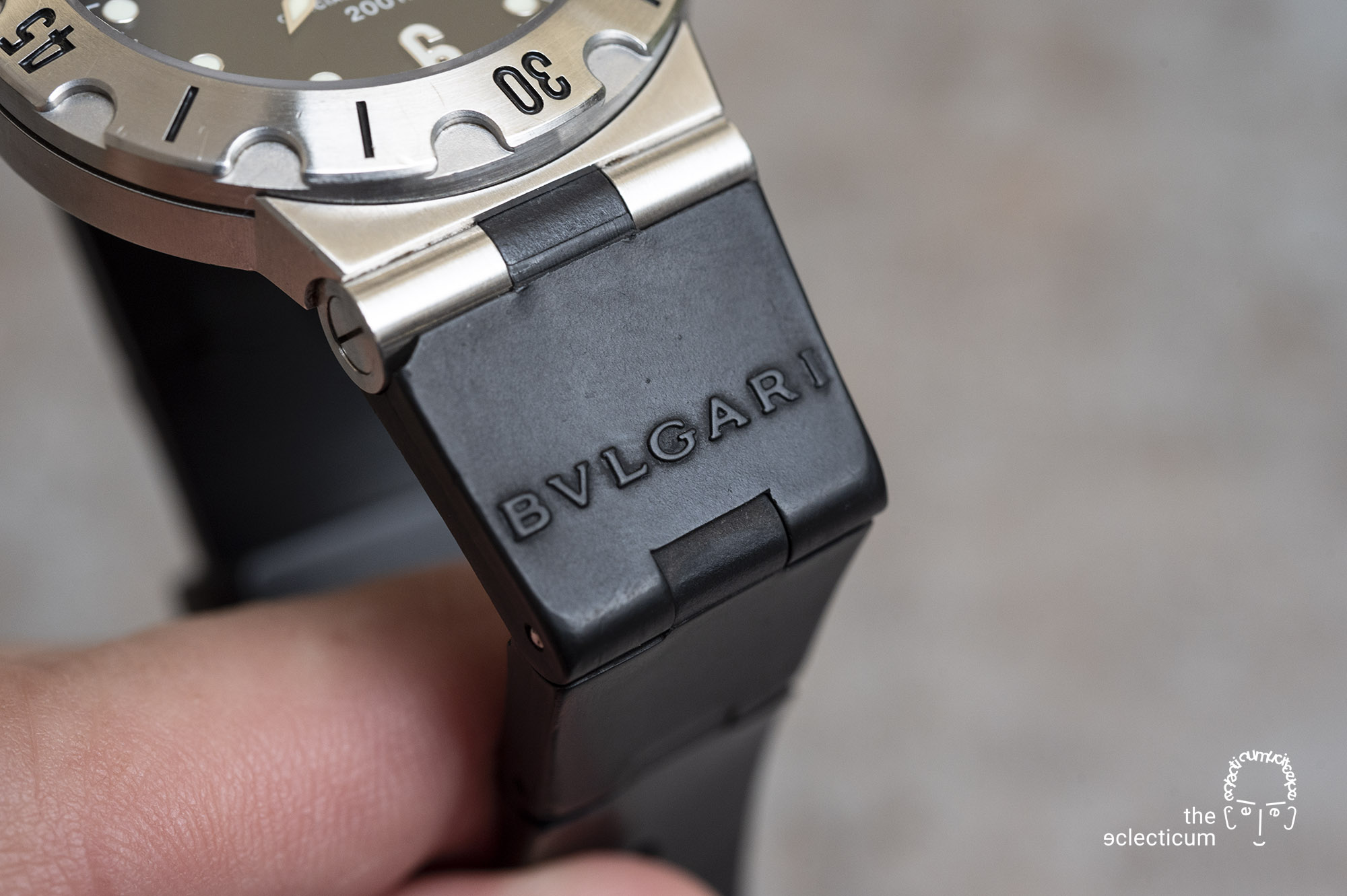 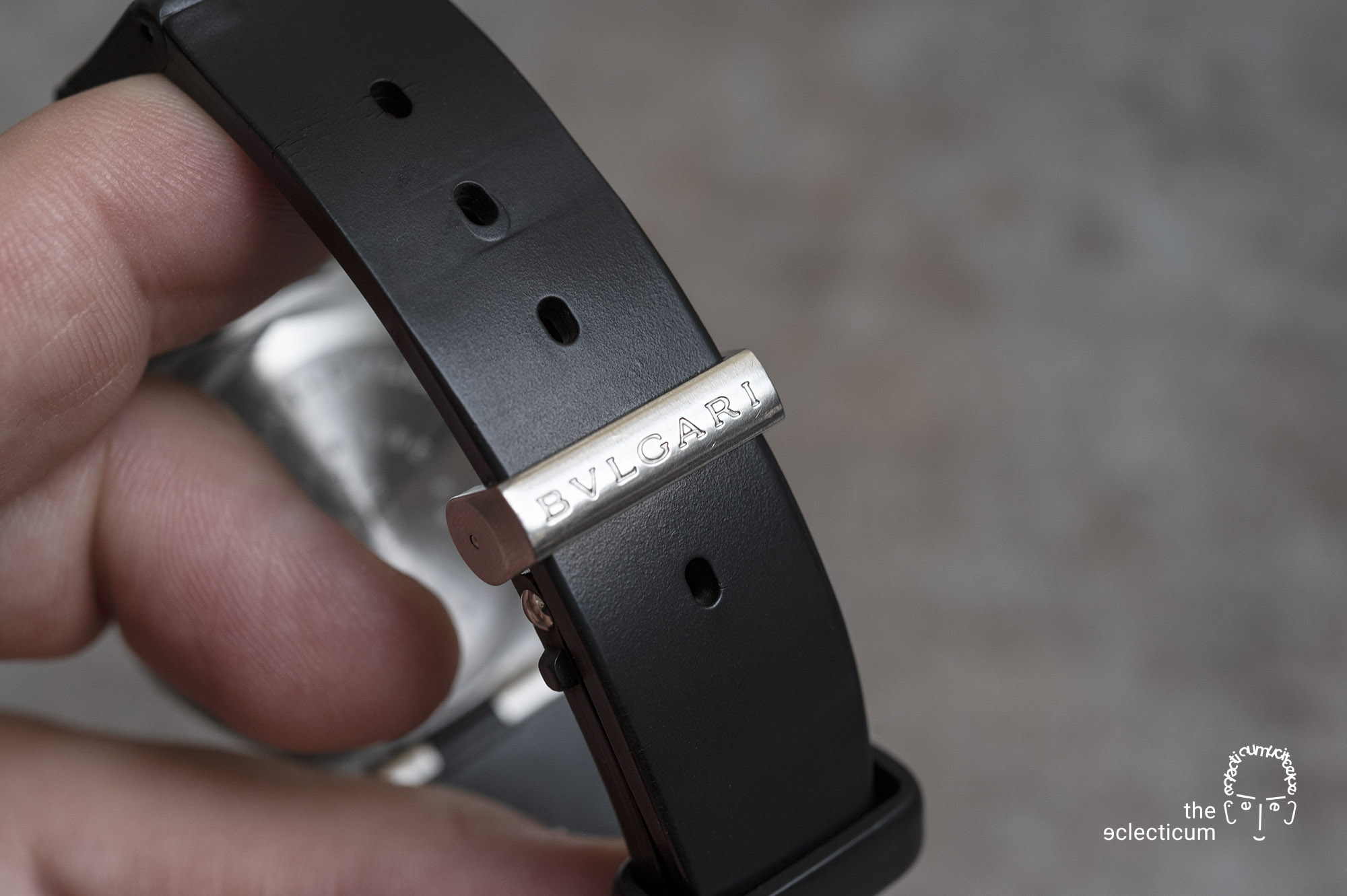 The original deployant clasp – some have had mechanical issues but from what I heard they were replaced swiftly. 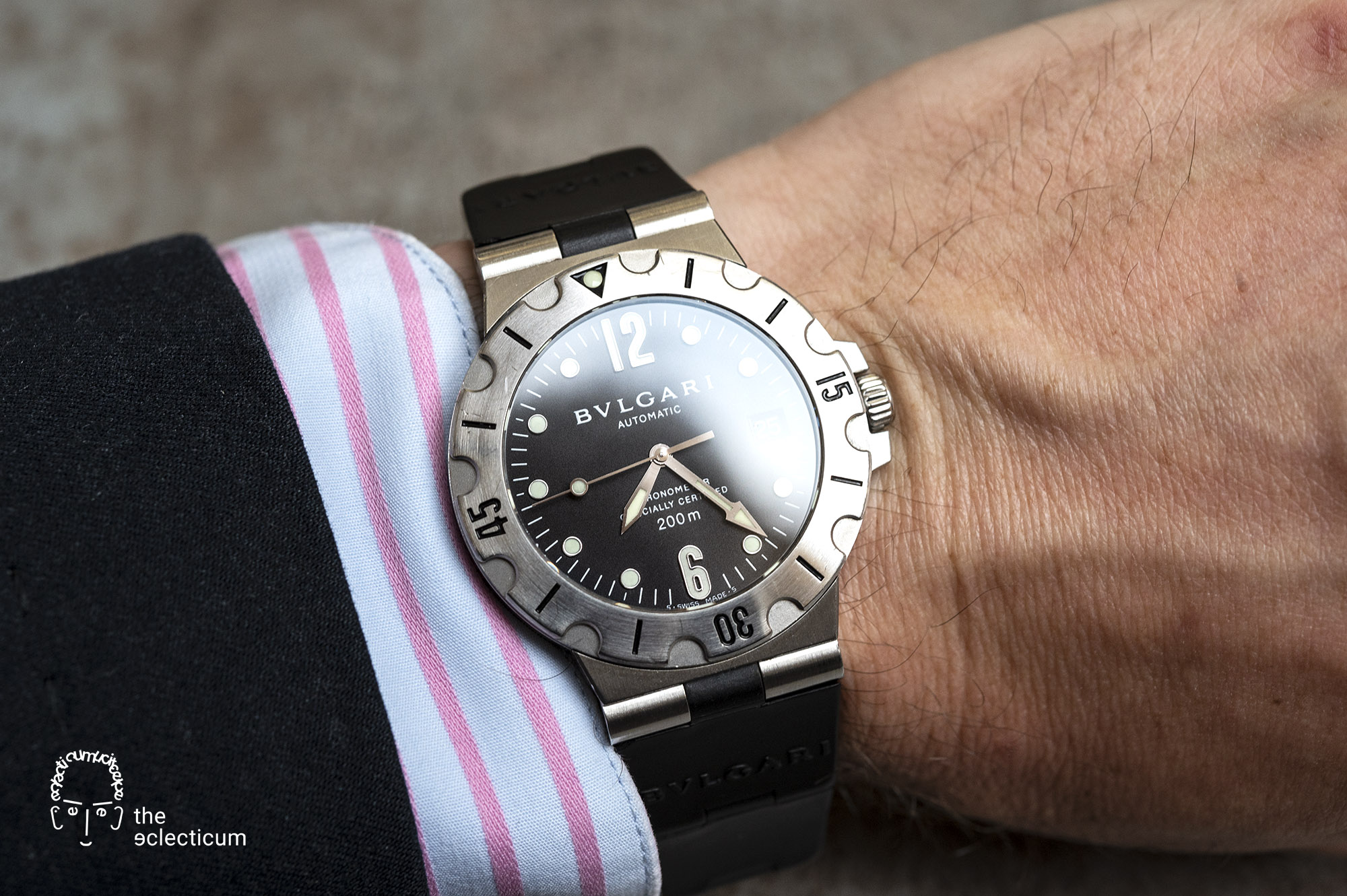 Bvlgari might have realised this and in later versions of this watch they offered a less ‘eye-catching’ rubber strap (that might have also simply been a consequence of materials and production technology advancements).

There was also a fantastic, pivoted link steel bracelet – which I still must hunt…

Side note: you might find the original Bvlgari rubber bracelet a bit too bold or dated, or both. With the proprietary straps needed there are little option, but here are a few. After a bit of search I ended up with this sporty, cheap rubber strap from an online store, and it gives the watch a decidedly more contemporary look: 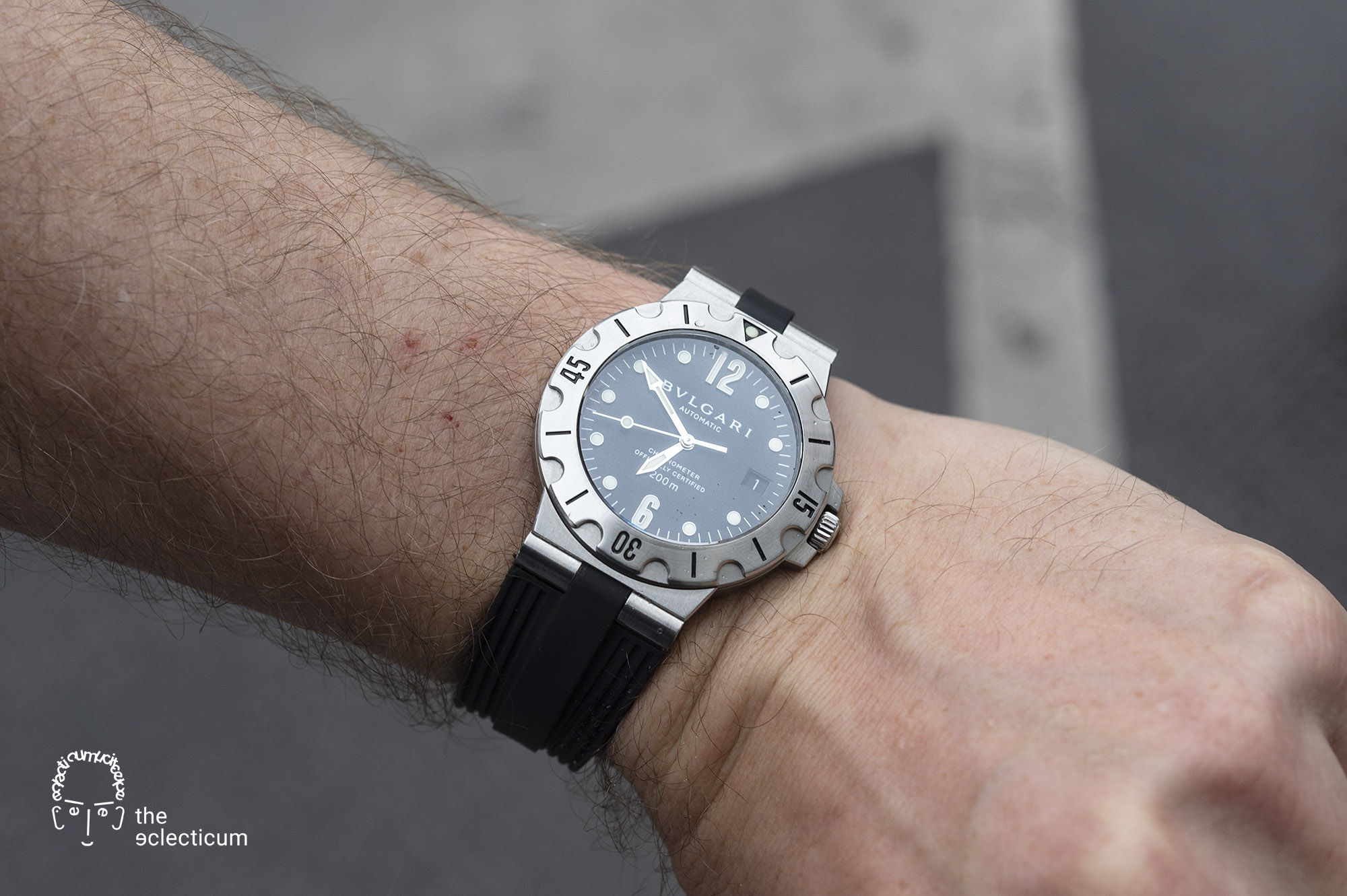 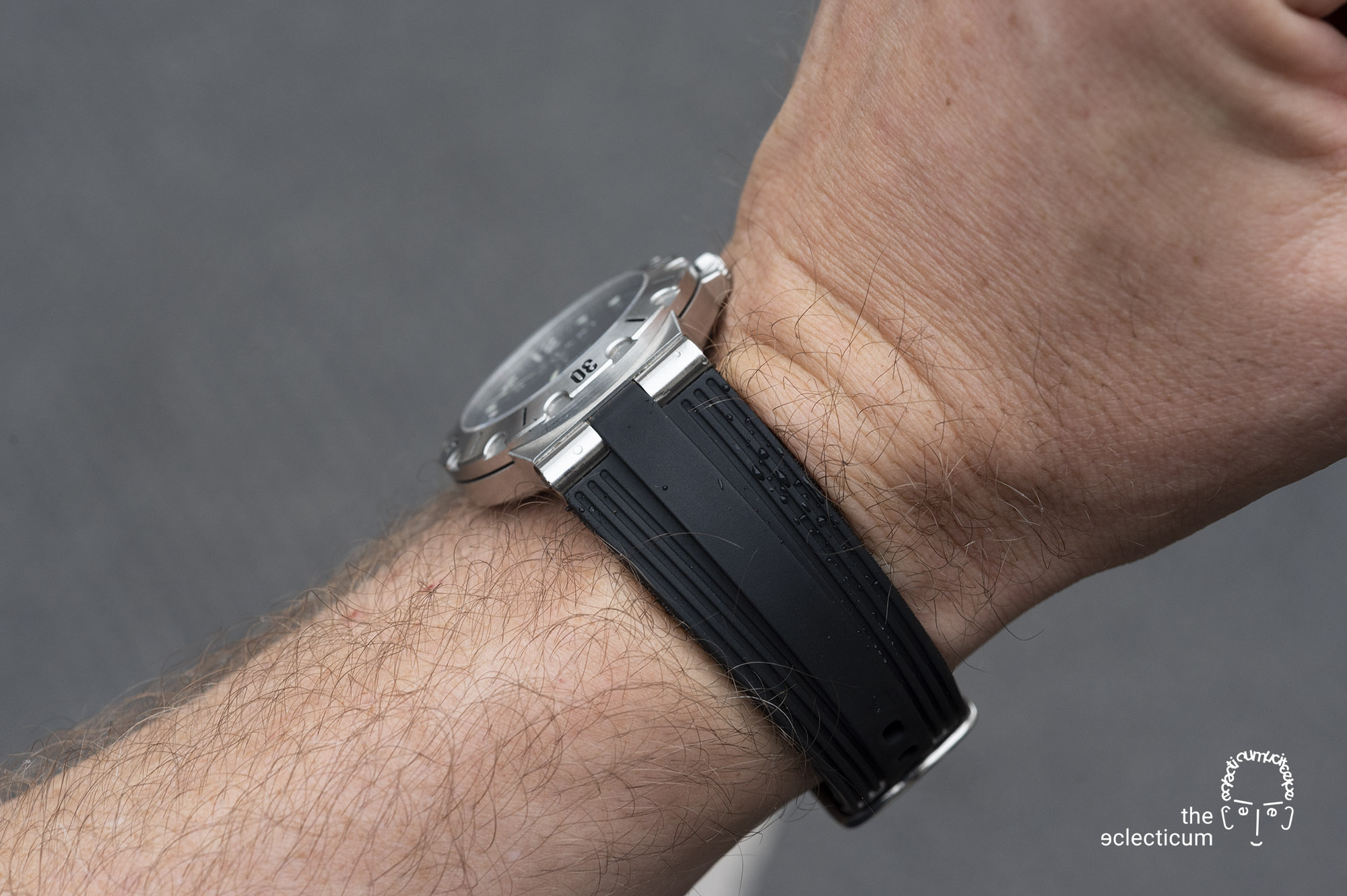 Changing it however was the tricky part: Bvlgari uses a counterscrewed lock system with extremely fine slots, and after supposedly two decades where no one changed a strap on my watch, the threads were really tightly closed, and I had to ask a watchmaker to help me out.

Only after two screwdrivers were filed to fit and the watch secured in a case holder, he managed to unscrew the threads: 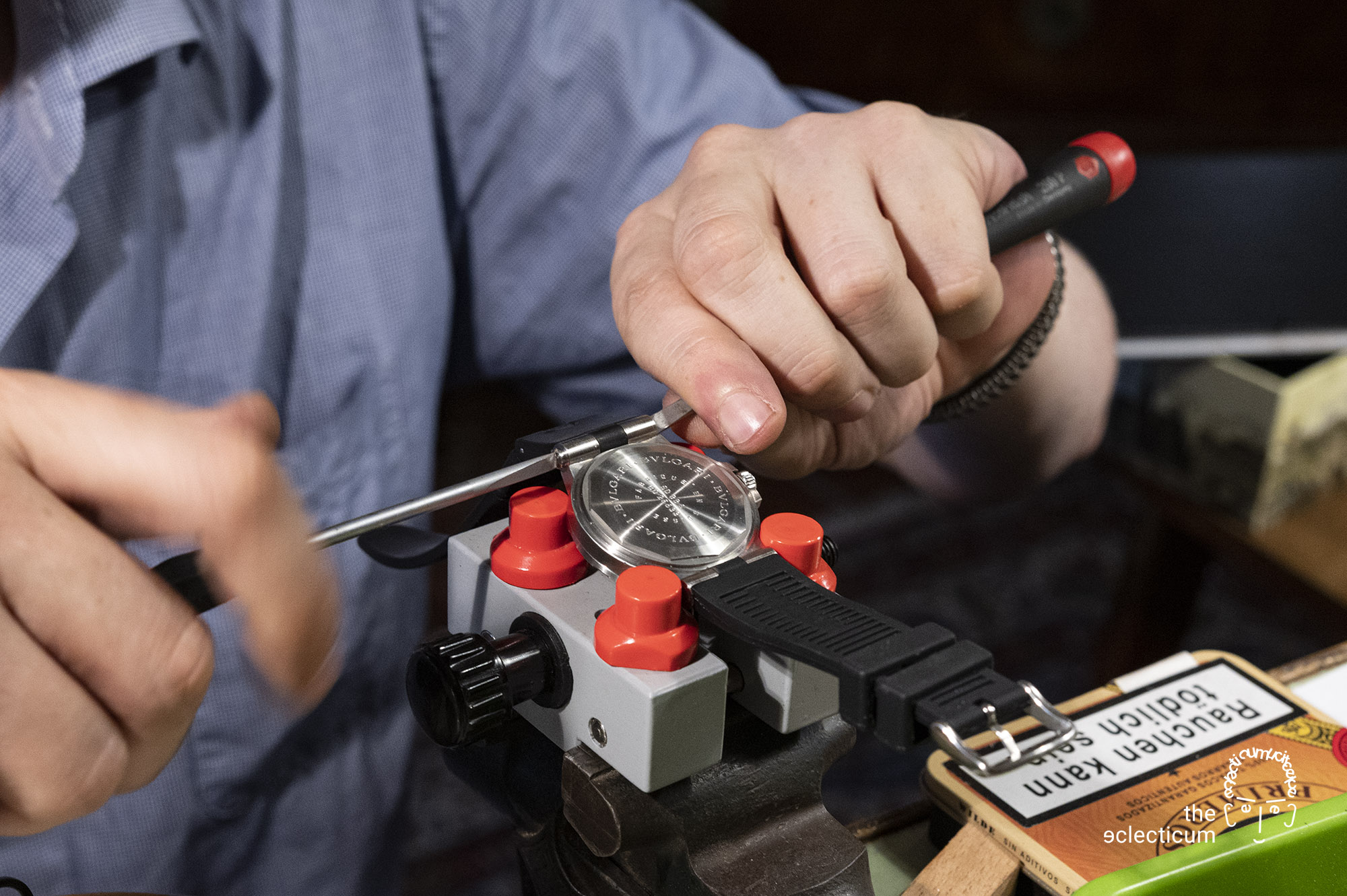 The impression of excellent quality I had with the case continued with the strap attachment parts: The pin is thick and solid compared to the spring bars we are used, and screw and thread parts precisely made to fit snugly into the case: 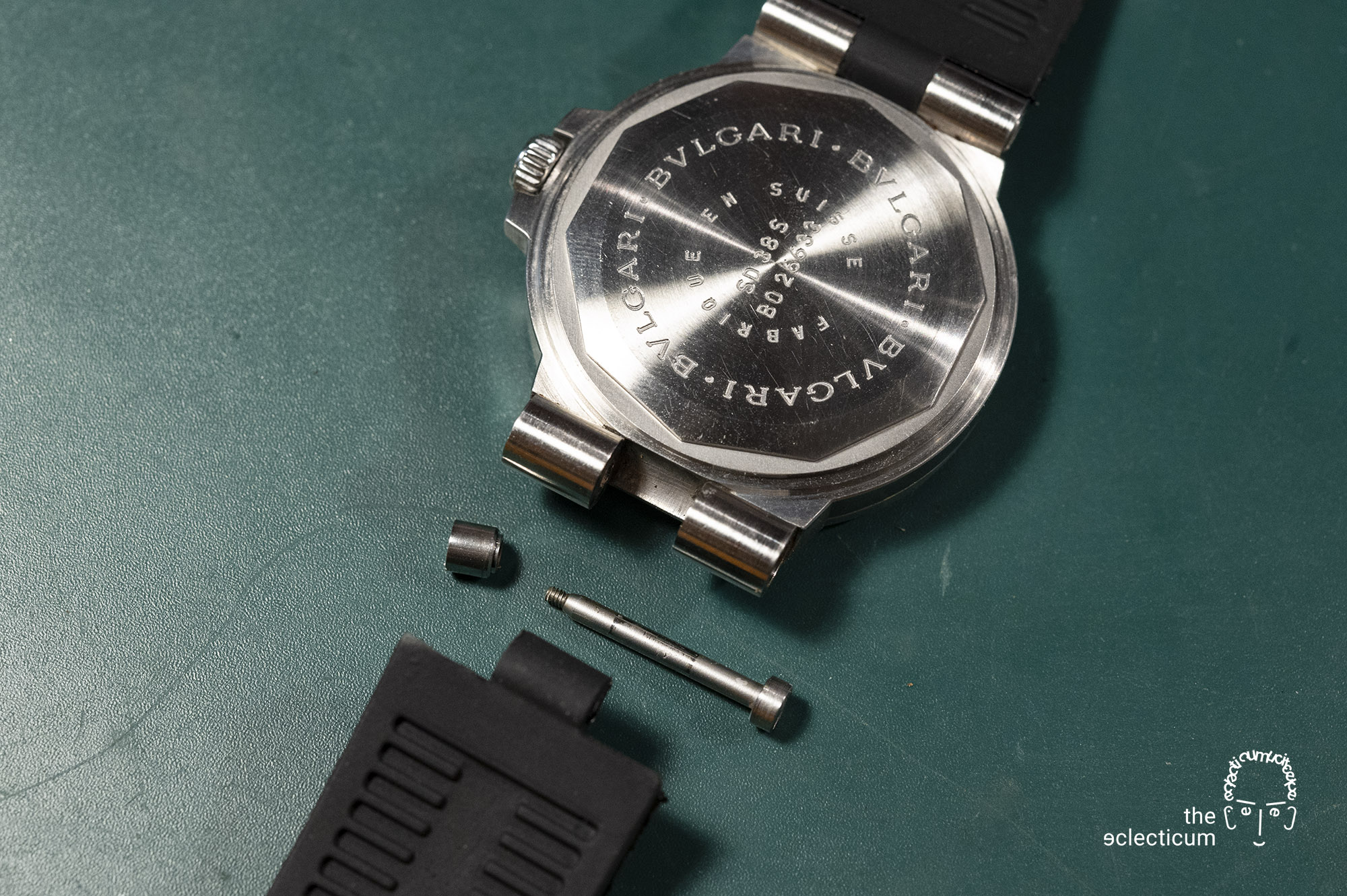 I could not be happier with the result, that were 40€ very well spend, although one should not have too high expectations when it comes to the details of this strap (I suspect the mould used for the strap has seen better days, the pin holes for example could benefit from more precision, but for 40€… nobody will see this either!).

I was looking for an everyday outfit, and voilà, here we are: 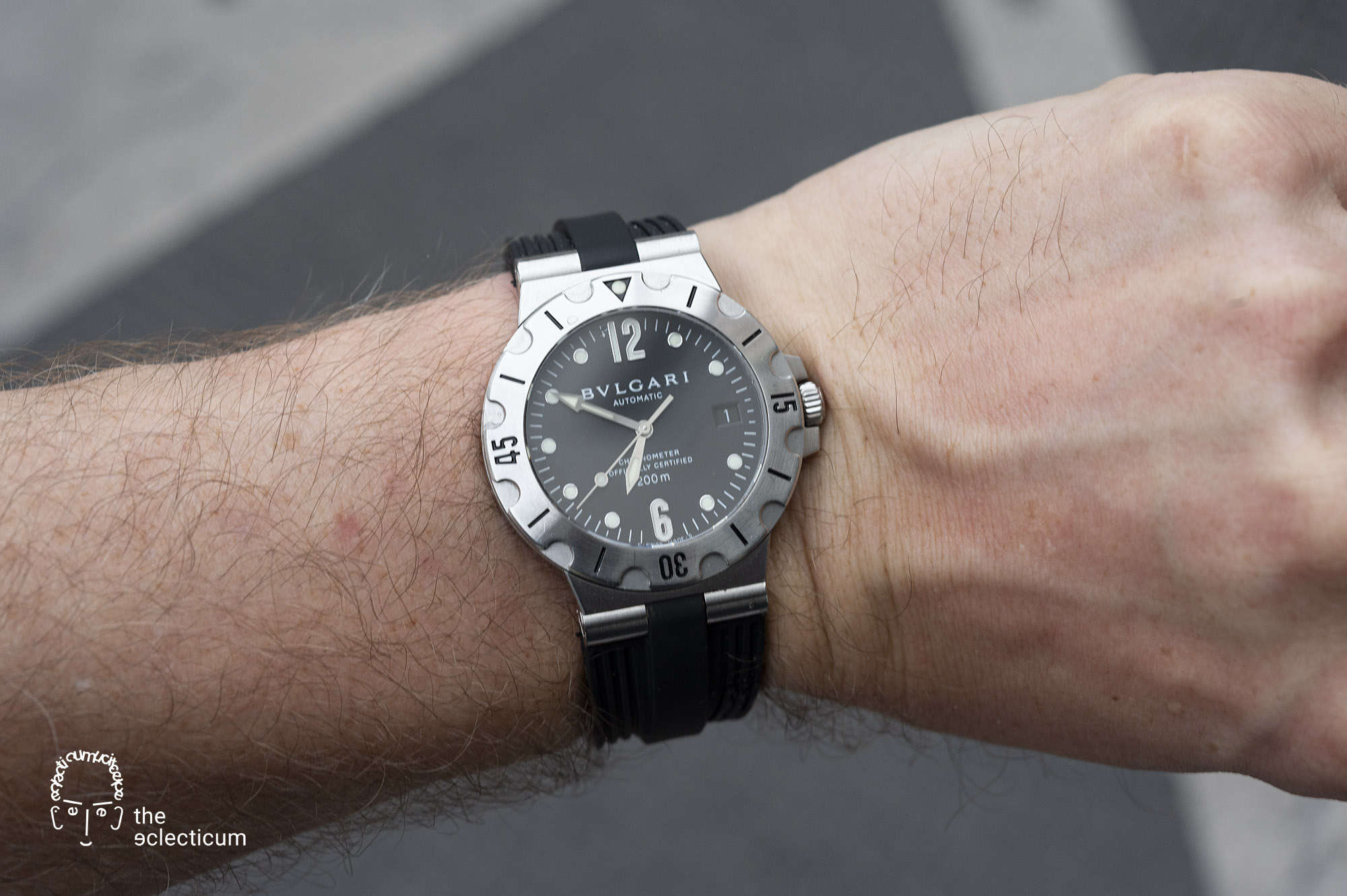 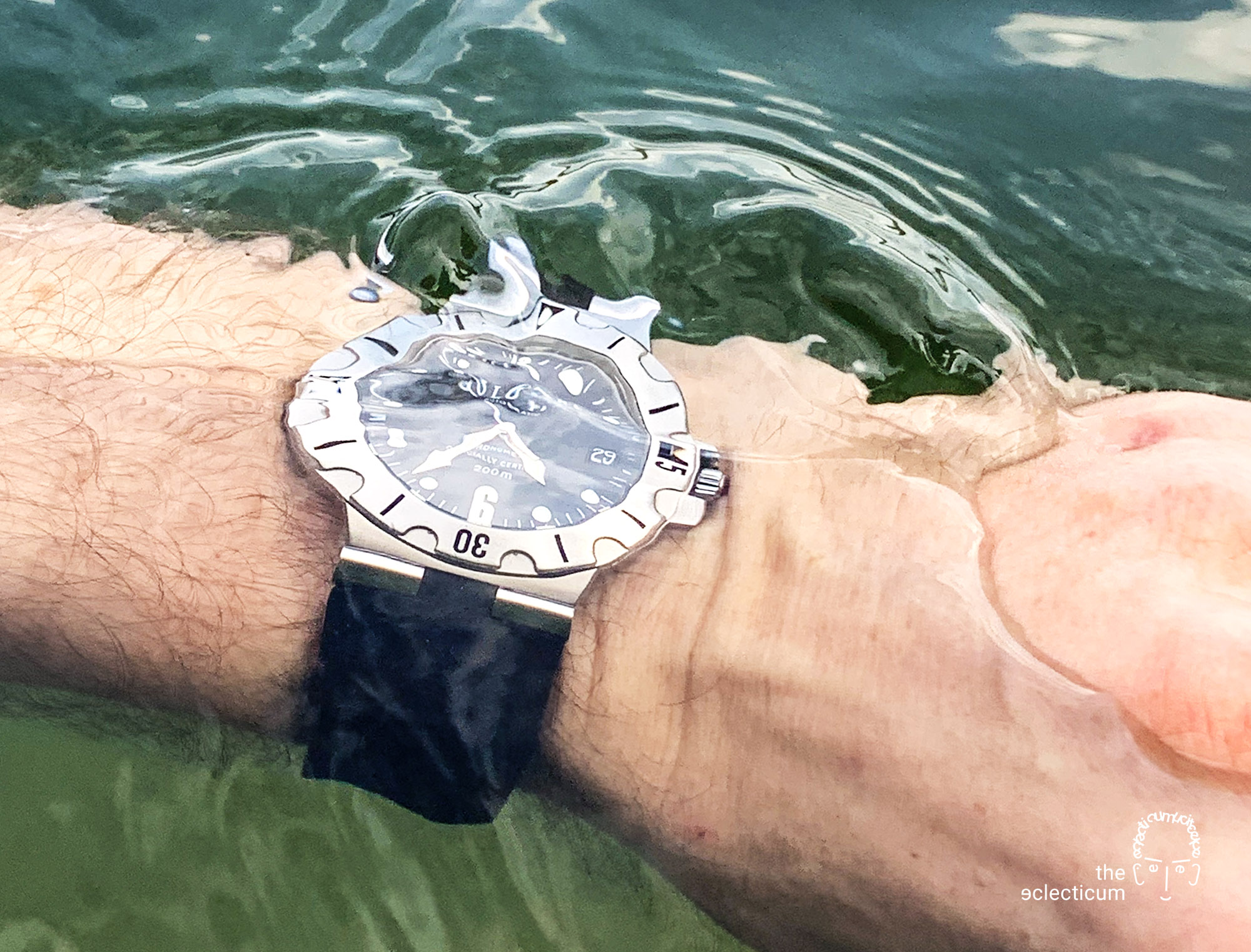 Wearing this watch is pure pleasure – it really blends with many situations, making it an ideal holiday timekeeper. It can take the proverbial licking and keeps on ticking; it doesn’t mind a beach volleyball game, nor does it feel out of place in the opera. On top, this really doesn’t break the bank… even if you have to share it with your girl (where the bracelet really shines!)! 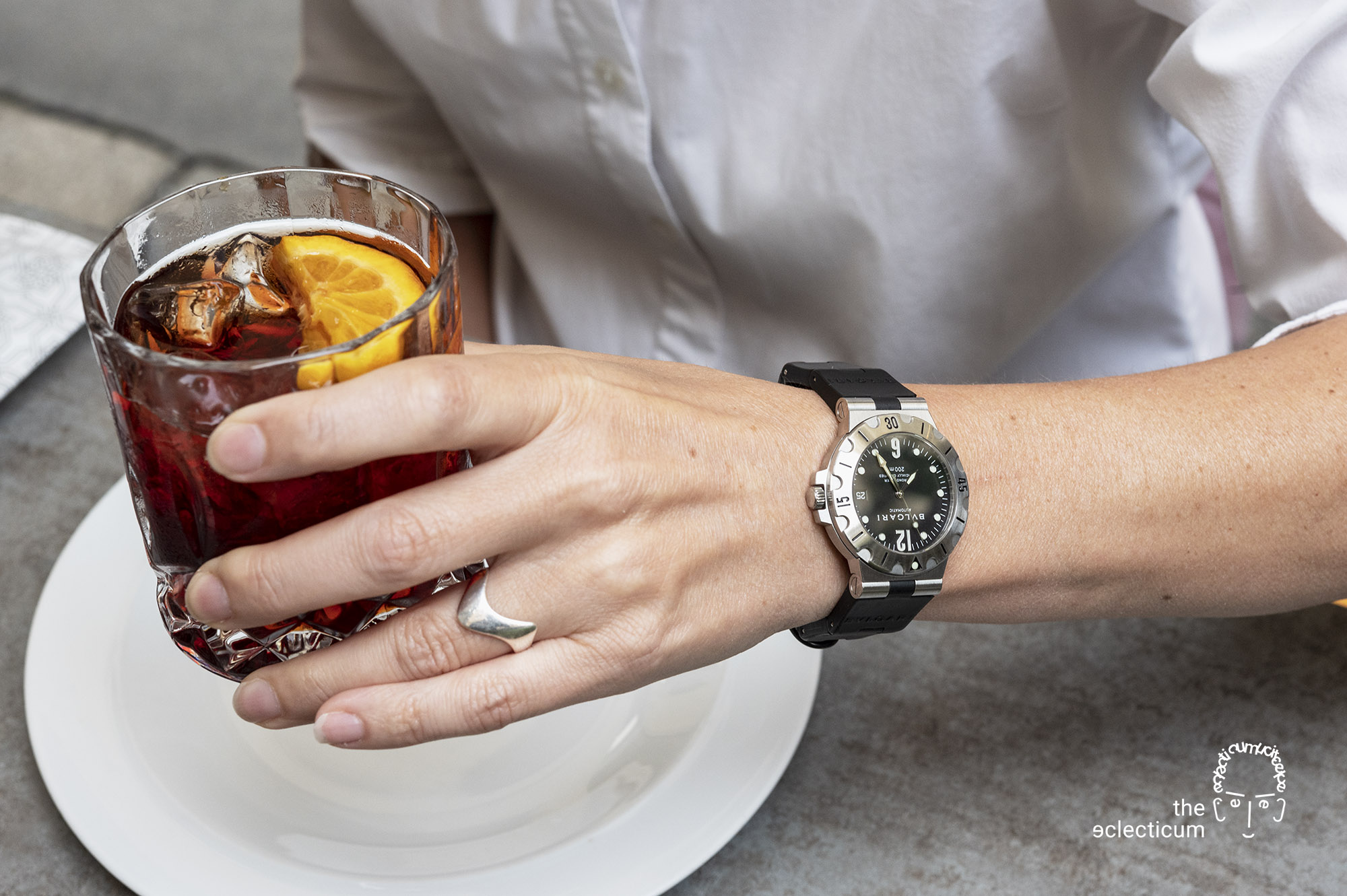 Replace the bracelet with a modern made-to-fit strap, and, depending on your taste, the package might come across even more attractive – an effortless blend of elegance and ruggedness – only the Italians know to pull of this feat!

P.S.: Special thanks to watchmaker Schmollgruber-Nischl in 1050 Vienna for helping change the bracelet!