Hands-on with A. Lange & Söhne ´1815 Rattrapante Honeygold` with real live life pictures – and a competitor on par 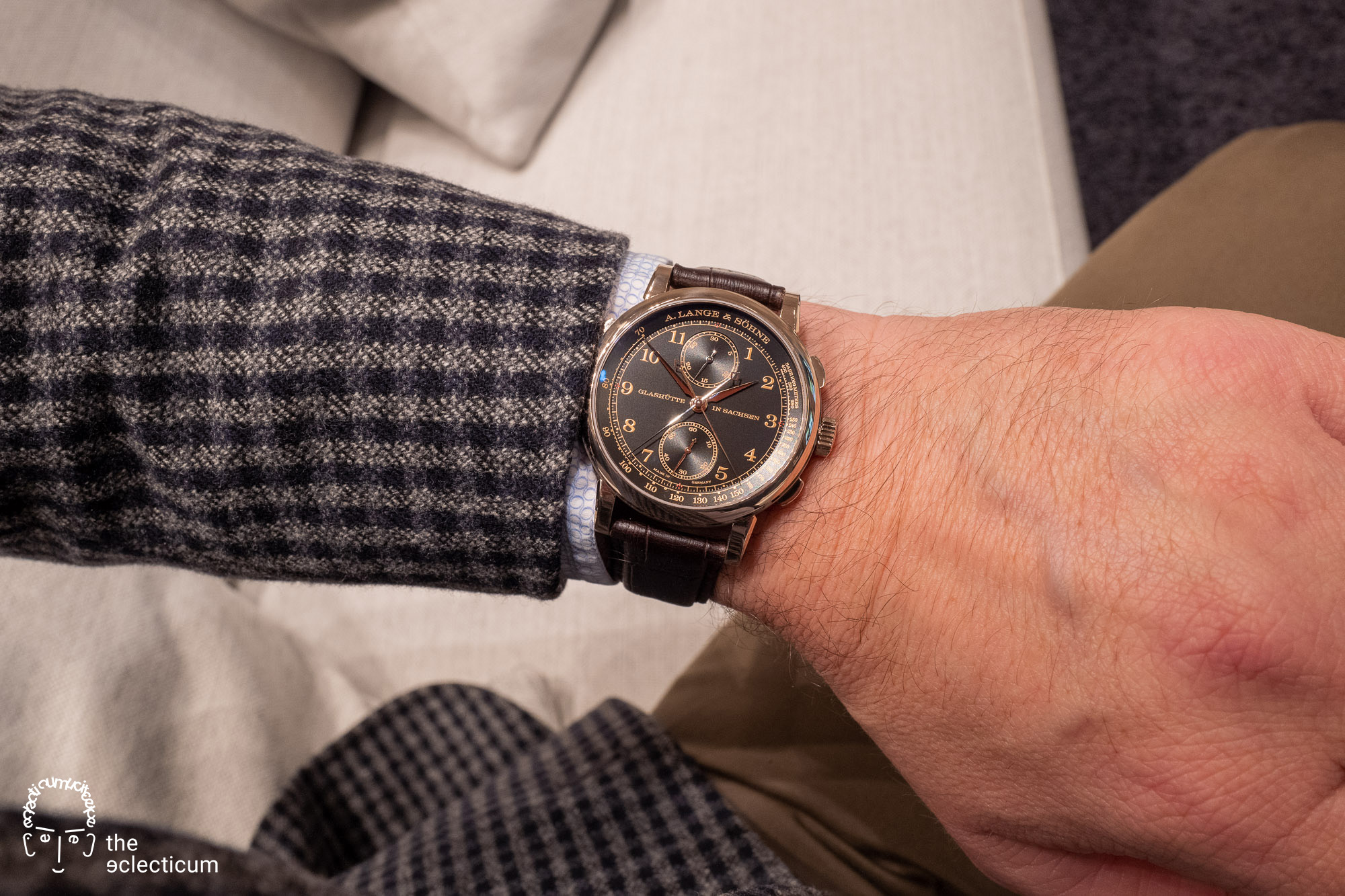 Before looking at the watch itself, let´s talk about some context. The 1815 Rattrapante Honeygold is a member of the distinguished yet modest ´1815 collection`, which in general suits perfectly to the DNA of the brand. Its appeal, based largely on its simple and elegant design, is reminiscent of classic Glashütte pocket watches. For some it may be conservative and for others a reason to fall for them. It´s a matter of (personal) taste and preferences. For whatever reason it´s members are quite often in the shadow of some Lange “darlings” like the Lange1 or the Datograph – good or bad.

Rattrapante – it´s a chronograph with added feature(s) to measure an interval on top of the time. Something that quite often doubles the price of a chronograph, just for one more hand – more or less. Before the late 20th century when IWC industrialized the complication it was like a high-performance super car – comparable price tags, and mainly because of this, an extremely limited target group. What looks so simple and beautiful on the outside is quite complex on the inside, to say the least. And additional pinion in the central axis, a catch-up mechanism and an additional control device: more difficult to render than tourbillons and on par with minute repeaters to properly adjust them. In case you would like to know more about the complication itself, I can recommend an article by Declann Quinn published in ´Revolution` (Volume 9, 2006). Also, its written with a good sense of humour and “fast sausage dogs” are part of it 😉

When it comes to chronographs Lange has nothing to proof, not anymore. They shacked some asses in glorious Switzerland if you allow me to say so. A “bold” first was the Datograph in 1999, followed by the “mighty” Double Split and the (1st generation) 1815 Chronograph in 2004. In 2018 Lange pushed it even further when they introduced the Triple Split, nothing less than the world´s most complicated chronograph wristwatch, which splits not only the seconds but also the minutes and hours – on request. 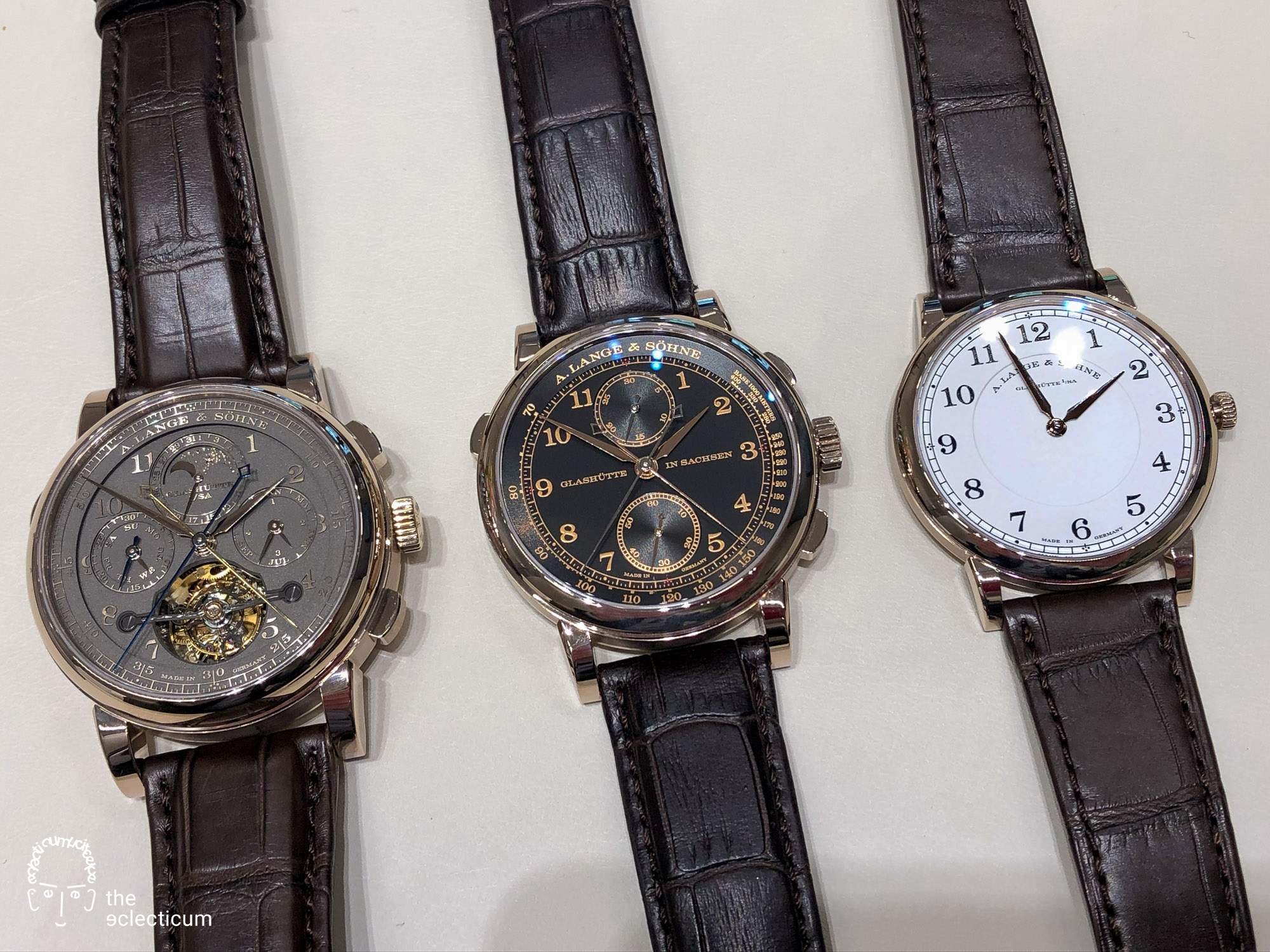 (Special set of three limited-editions models of the 1815 watch family in honey-gold cases, to celebrate the 175th anniversary)

It was comparatively late in 2020 Lange presented its first Rattrapante only (wristwatch), the one we are looking at right now – 1815 Rattrapante Honeygold, in celebration of 175 years of watchmaking in Glashütte (Ferdinand Adolph Lange established his first workshop in 1845). Why less complicated this time you may say? Is it to reduce the price or the size? I doubt but let´s see what we have. 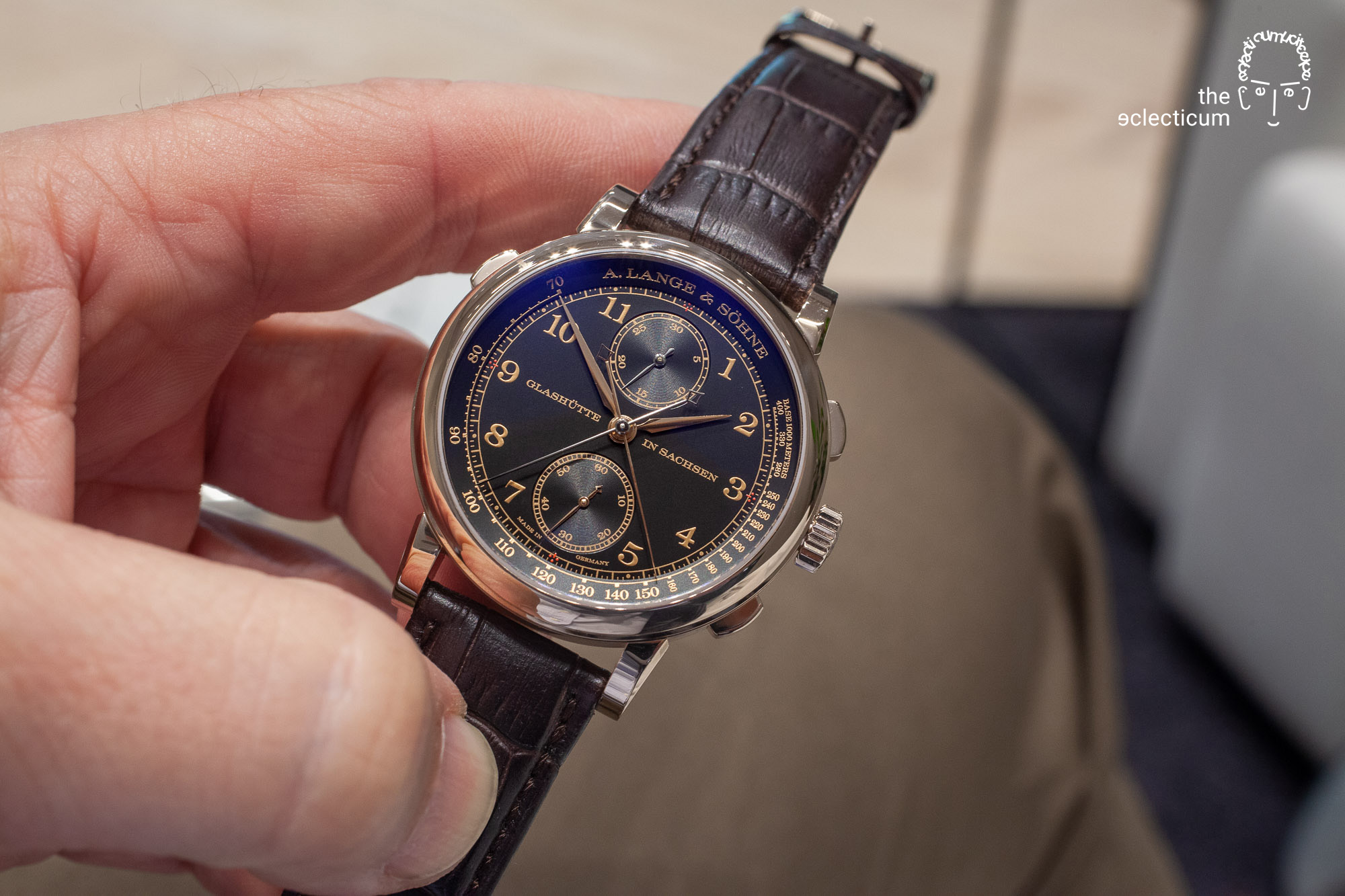 A honeygold (more subtle than yellow gold, almost as charming as rose gold and harder than platinum – exclusive to Lange) case, a black dial and lots of similarities to the (3rd generation) 1815 Chronograph, on the first view. The sub-dials are different to the “standard” equilateral triangle we know from Lange and adds spice without being conspicuous. I have seen similar on pocket watches, but currently no other (Chronograph Rattrapante) wristwatch comes to my mind. Together with the “wording” on the dial, it suits perfectly – very balanced and appealing to those with a soft spot for pocket watches. 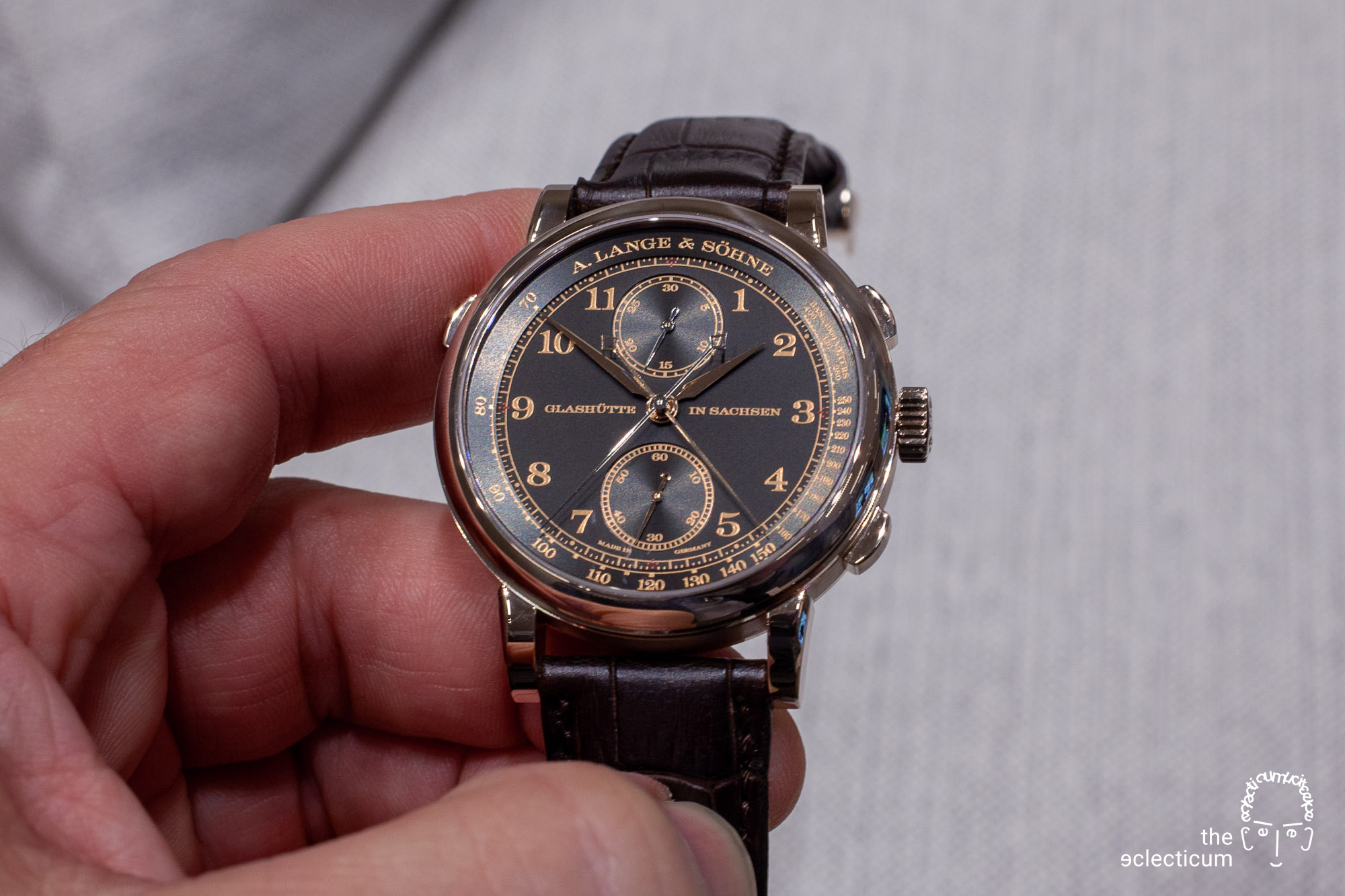 It´s a pretty face and a charming one as well. Almost flat without dedicated light, never boring in the detail. Depending on the light it oscillates between understated to drama. 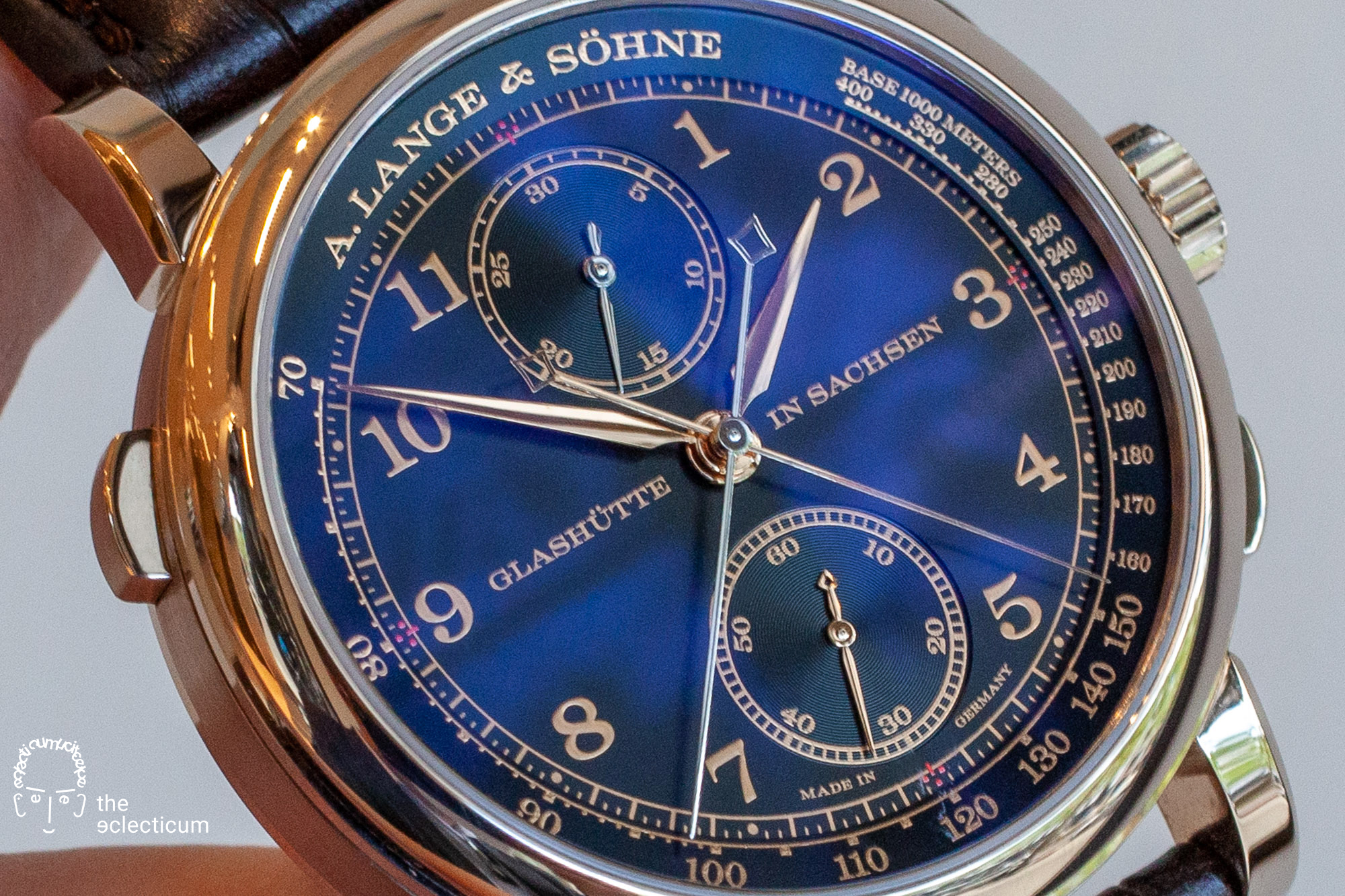 Simply perfect to be worn frequently, without getting too much attention from those who don´t know and don´t understand what it is all about. I like that and to me it´s a strength of the 1815 collection most of the time. 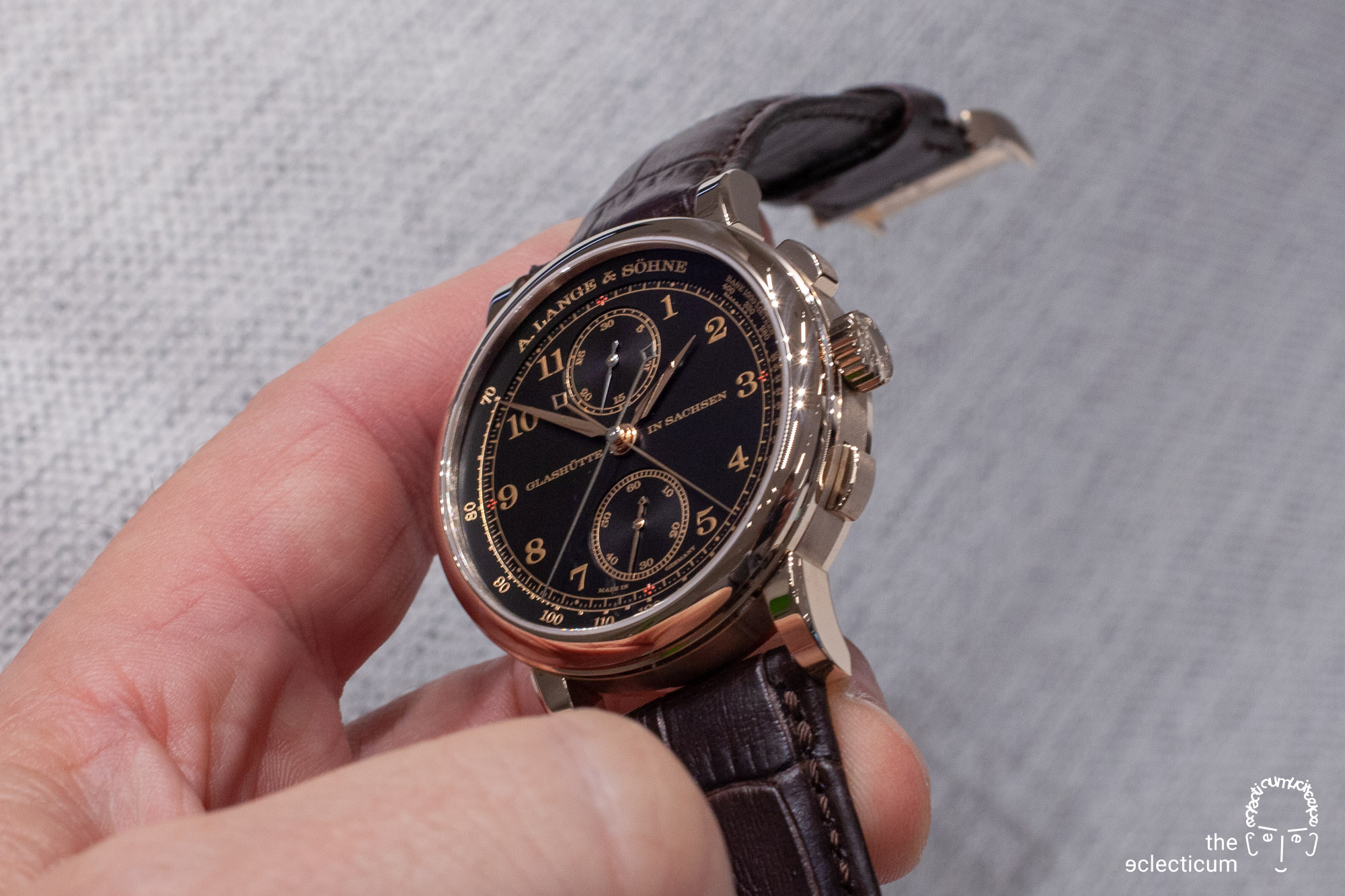 The case looks familiar to Lange connoisseurs and this is more than welcome. It´s excellent and feels solid! Honeygold is unique for Lange and we have seen it before, but only on special occasions. 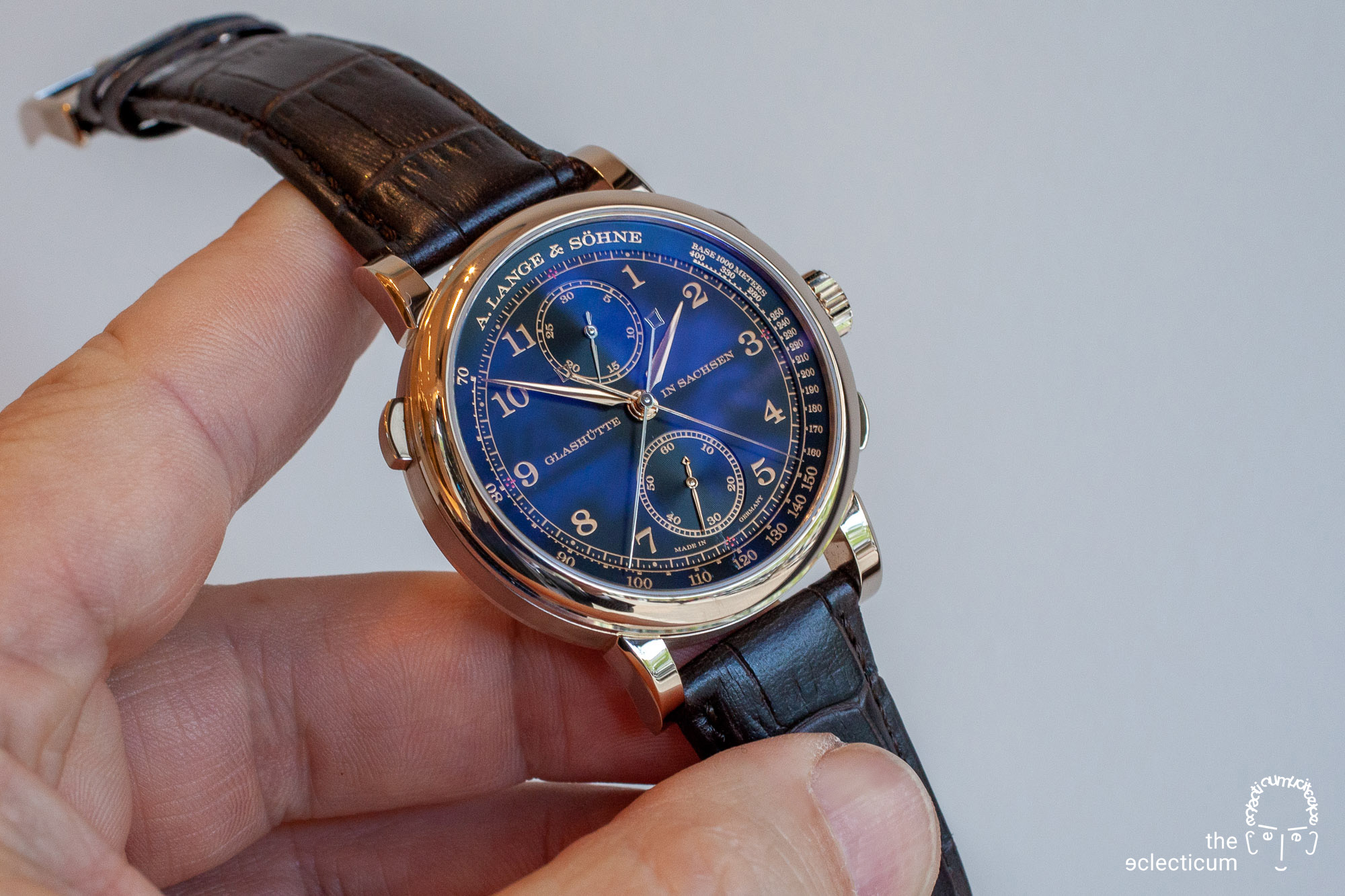 As always at Lange the coating on the sapphire glass shows some blue on dark dials, depending on the angle of the light. It´s sometimes difficult to catch with a camera, but just so nice to look at when the watch is on your wrist in different settings. Even traffic jams can be nice with that kind of “eye candy” 😉 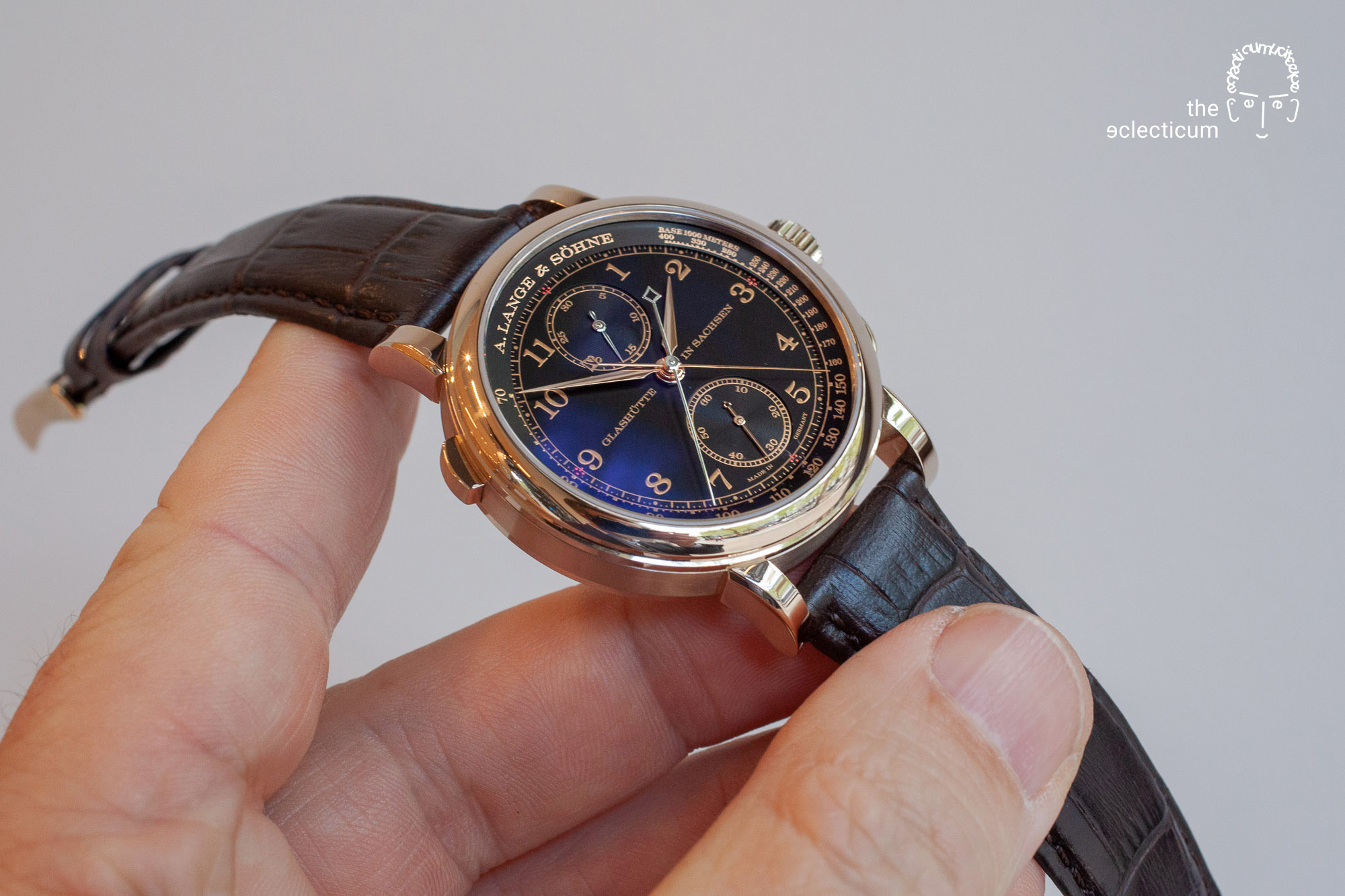 You might have seen it already. Lots of hands, almost like a ballet on the dial. It gets even more impressive yet beautiful once the hands are moving – big drama at its best. 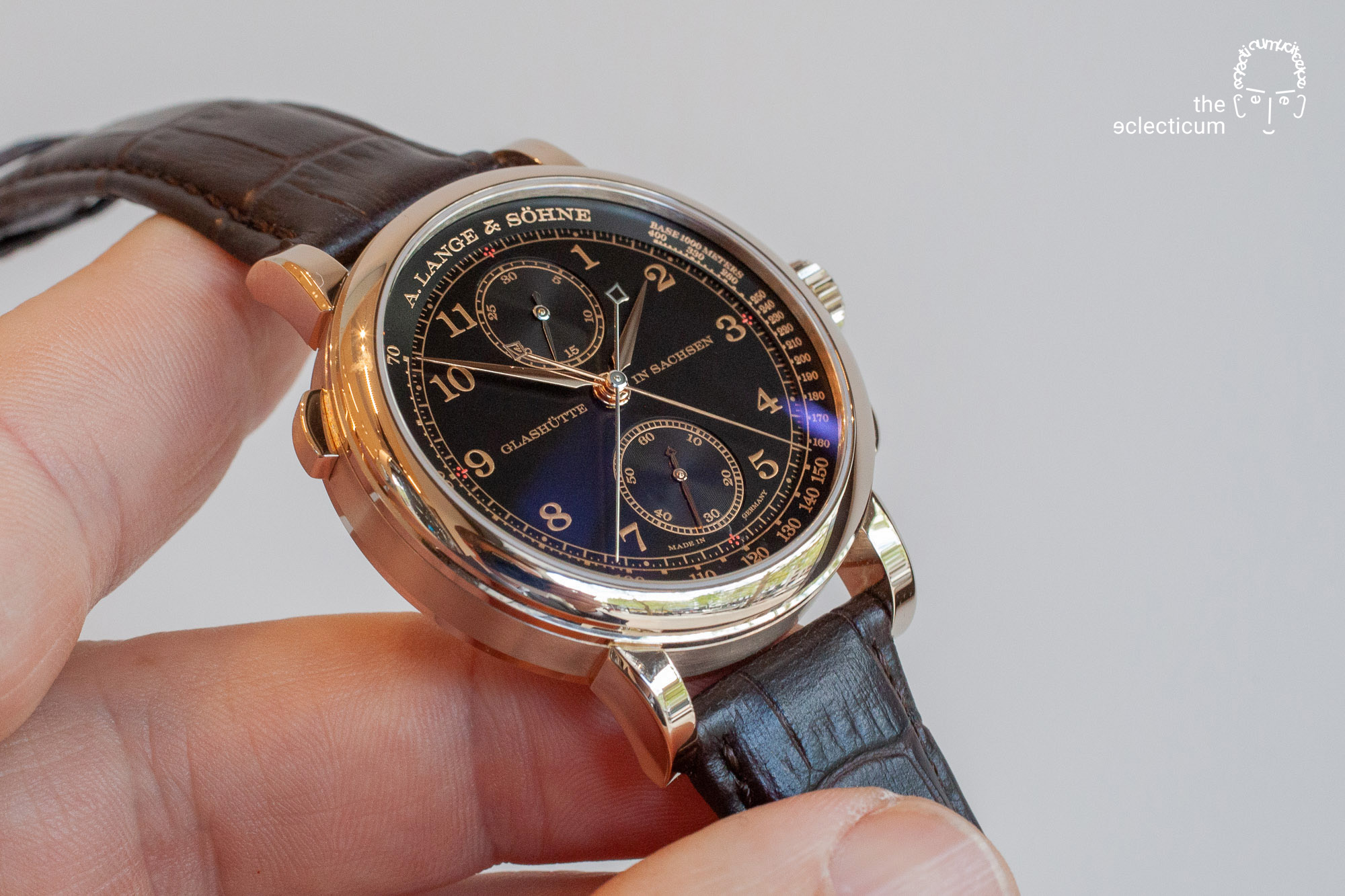 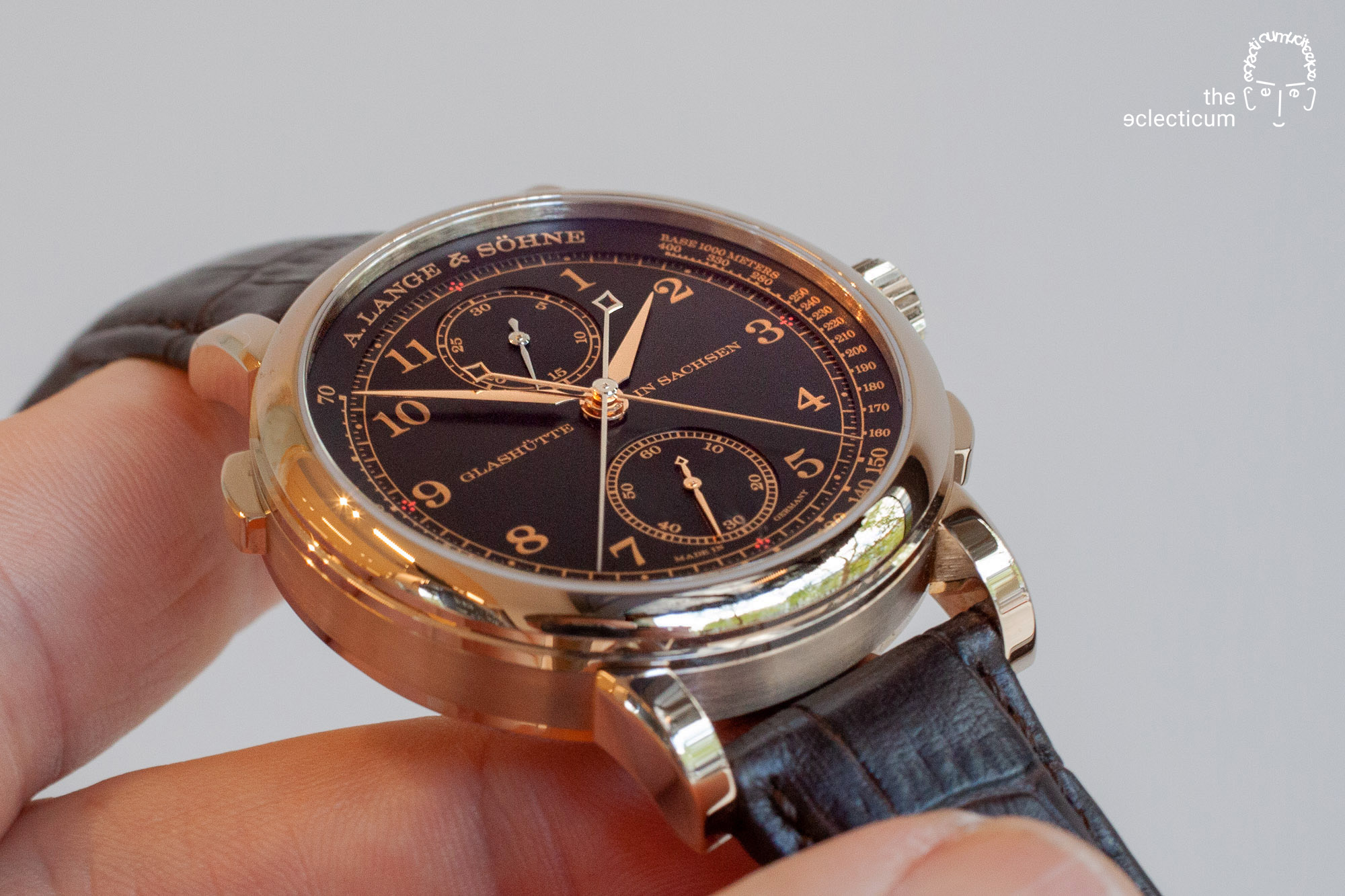 The depth of the two-level dial turns out nicely, which is not obviously when you look at the official press pictures only. 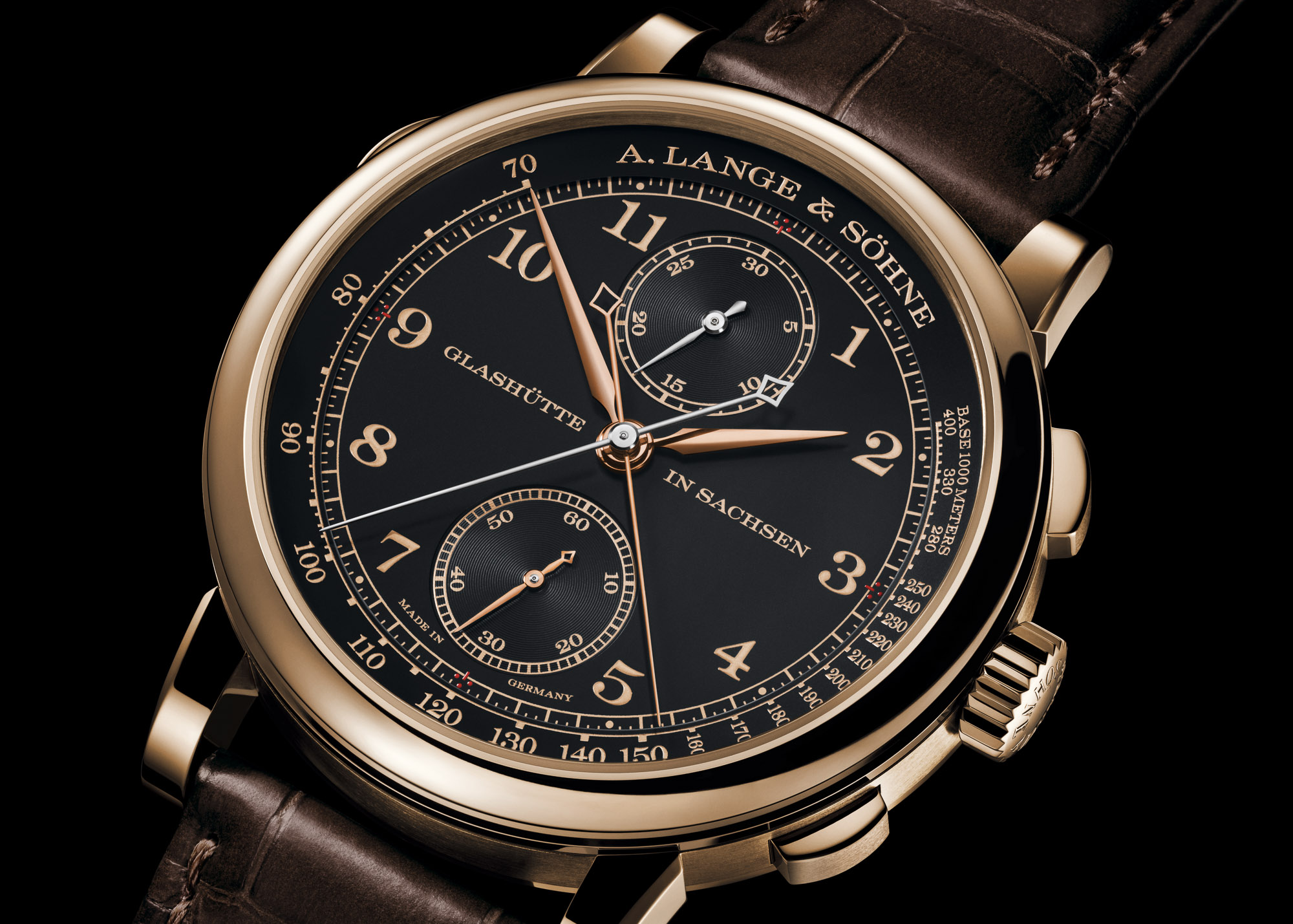 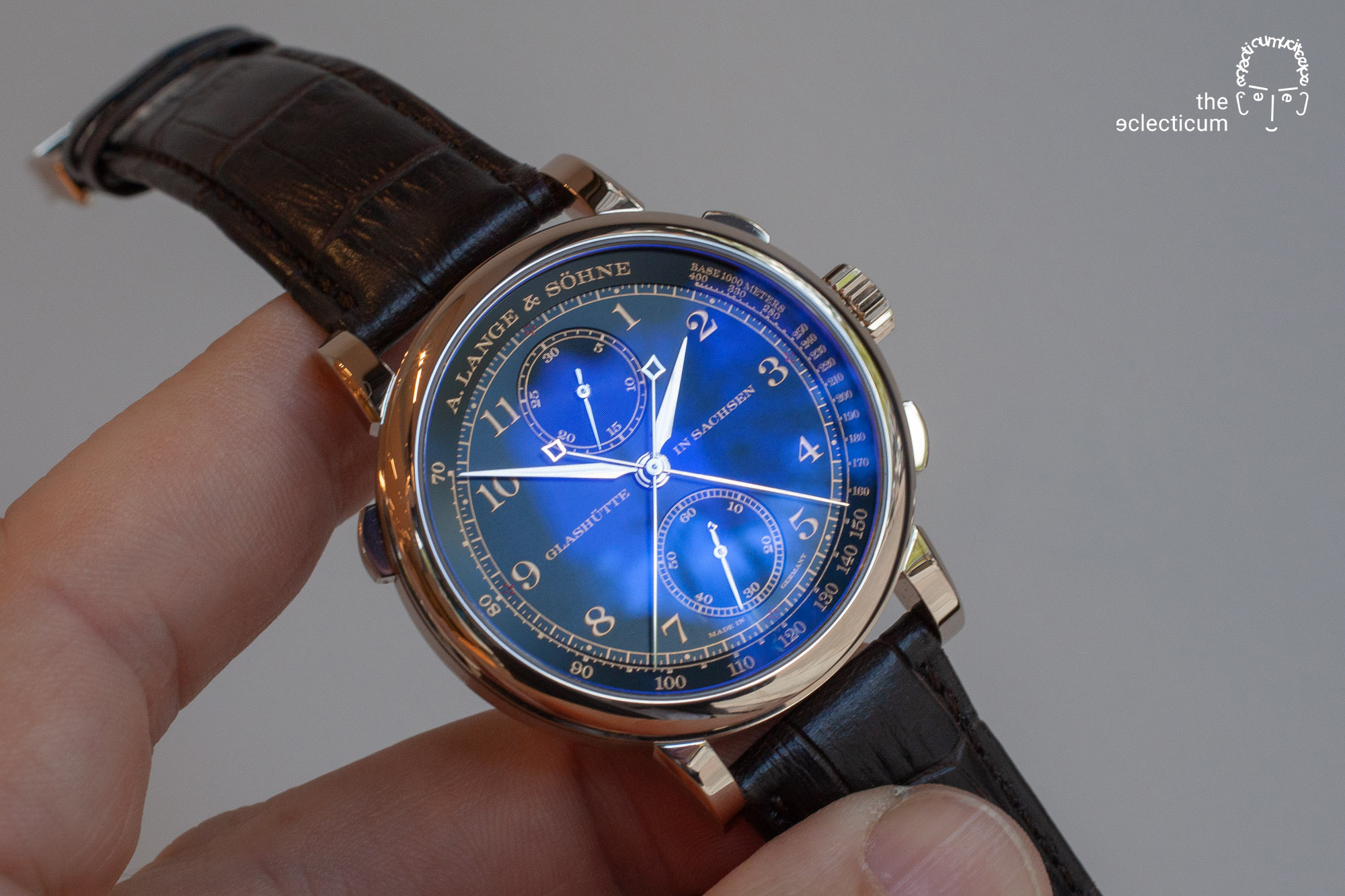 As I said before, nothing new at the case. The height is appropriate for the complication, and it doesn´t wear too high on the wrist. 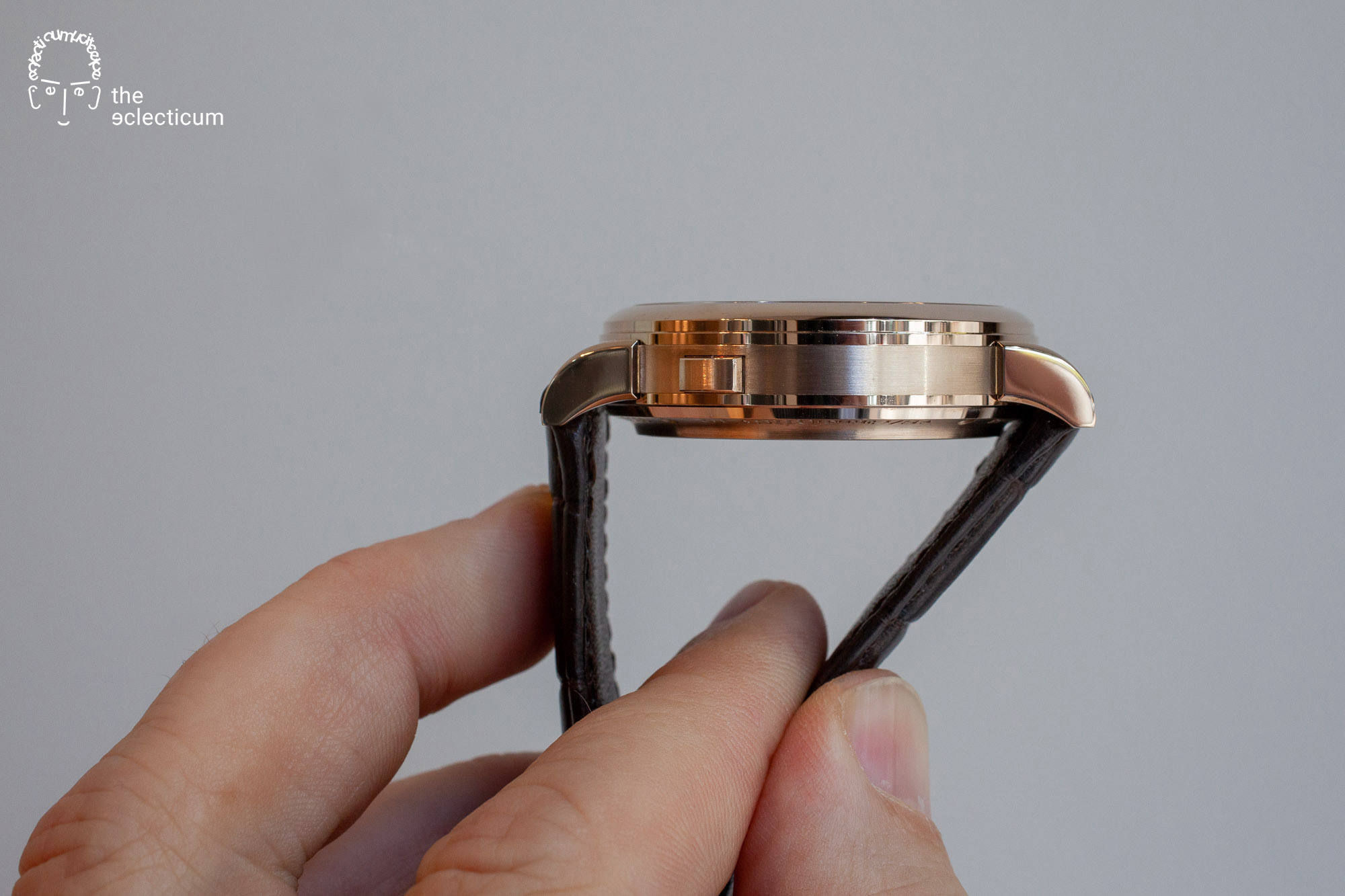 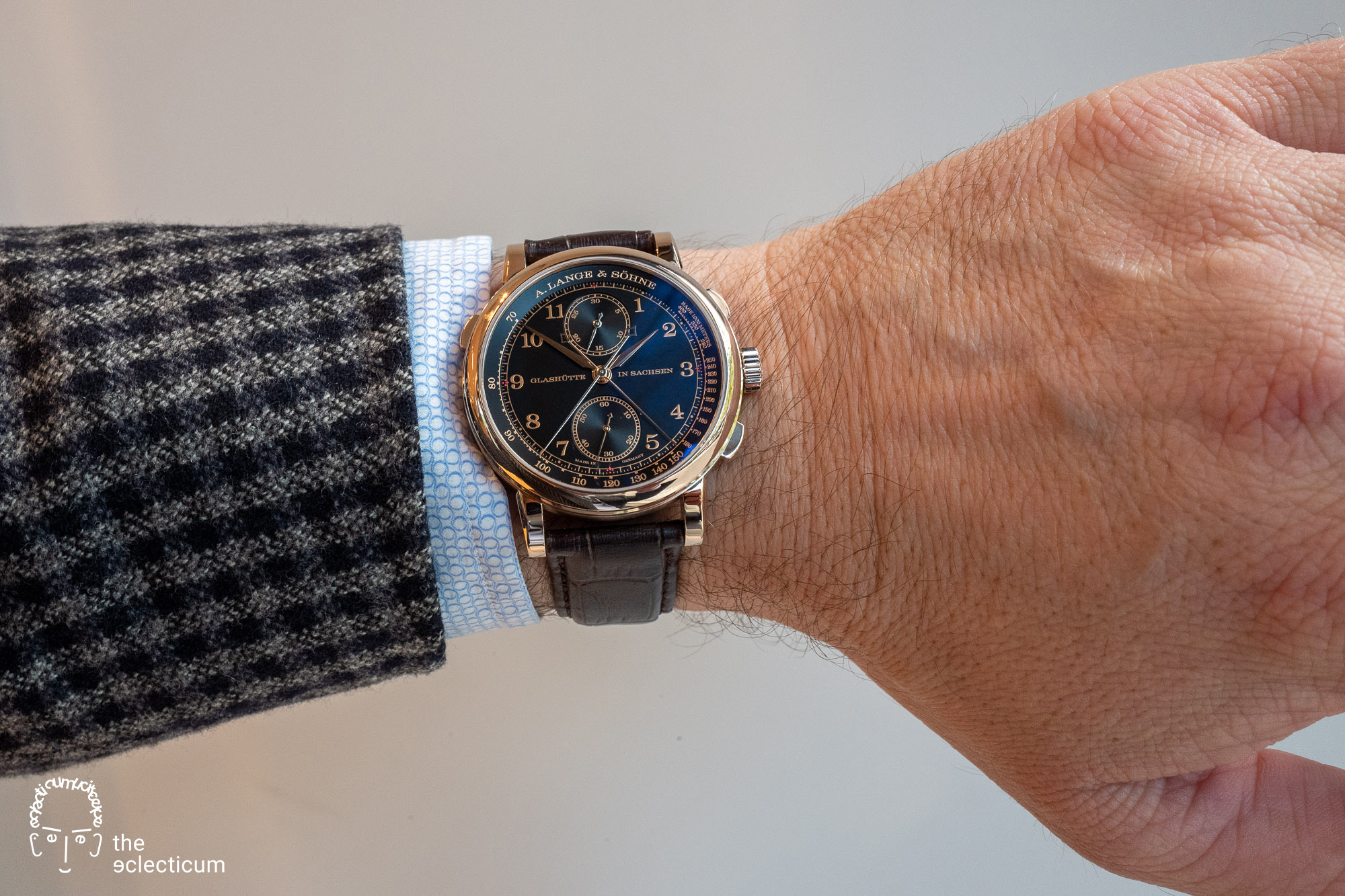 Judge by your own, but I liked it a lot on my (17cm) wrist. It feels solid like expected from Lange and even when the diameter is a tad on the bigger side, it still wears perfect on me – dressed up and casually, but not recommended for black-tie events. 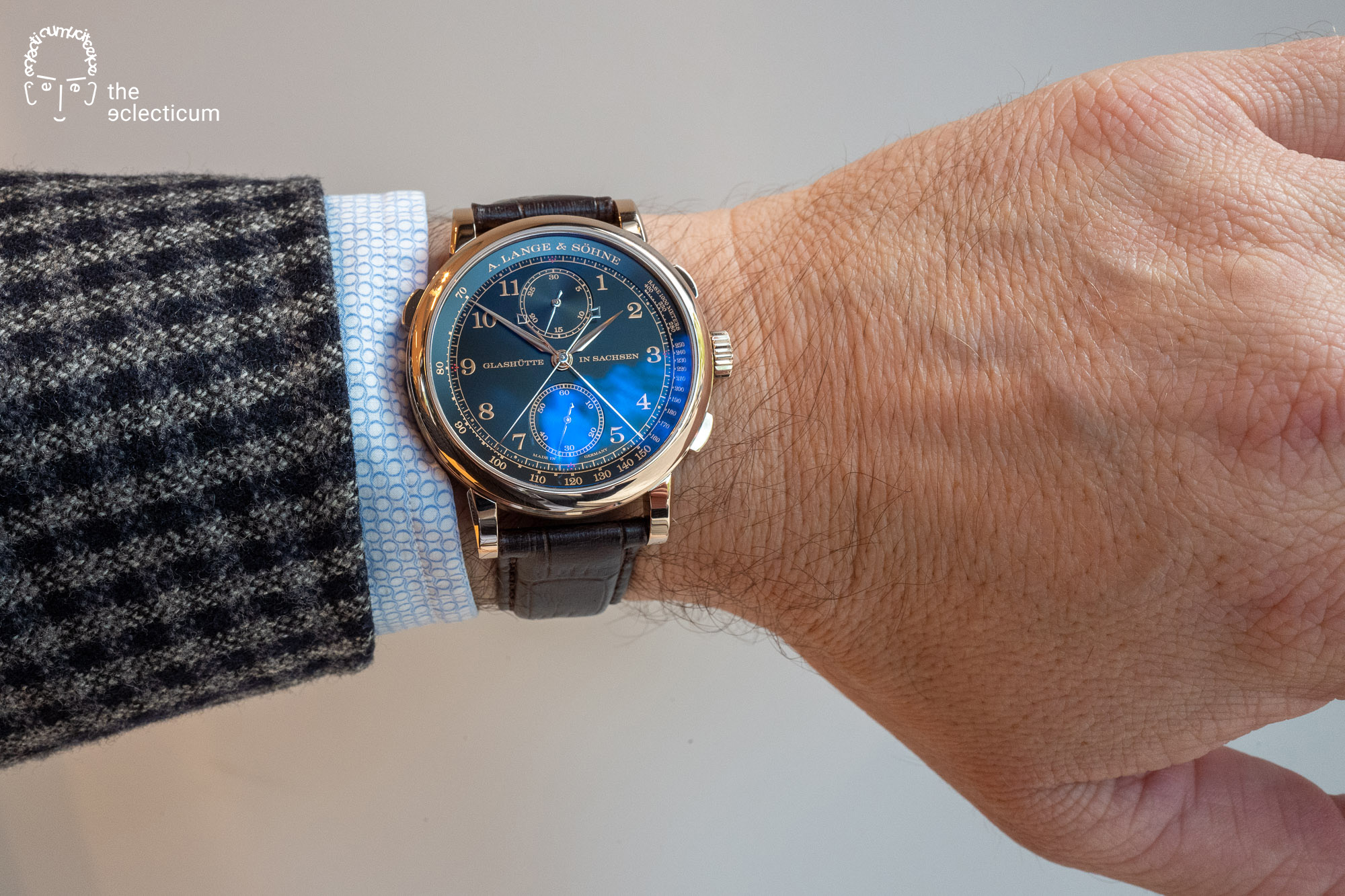 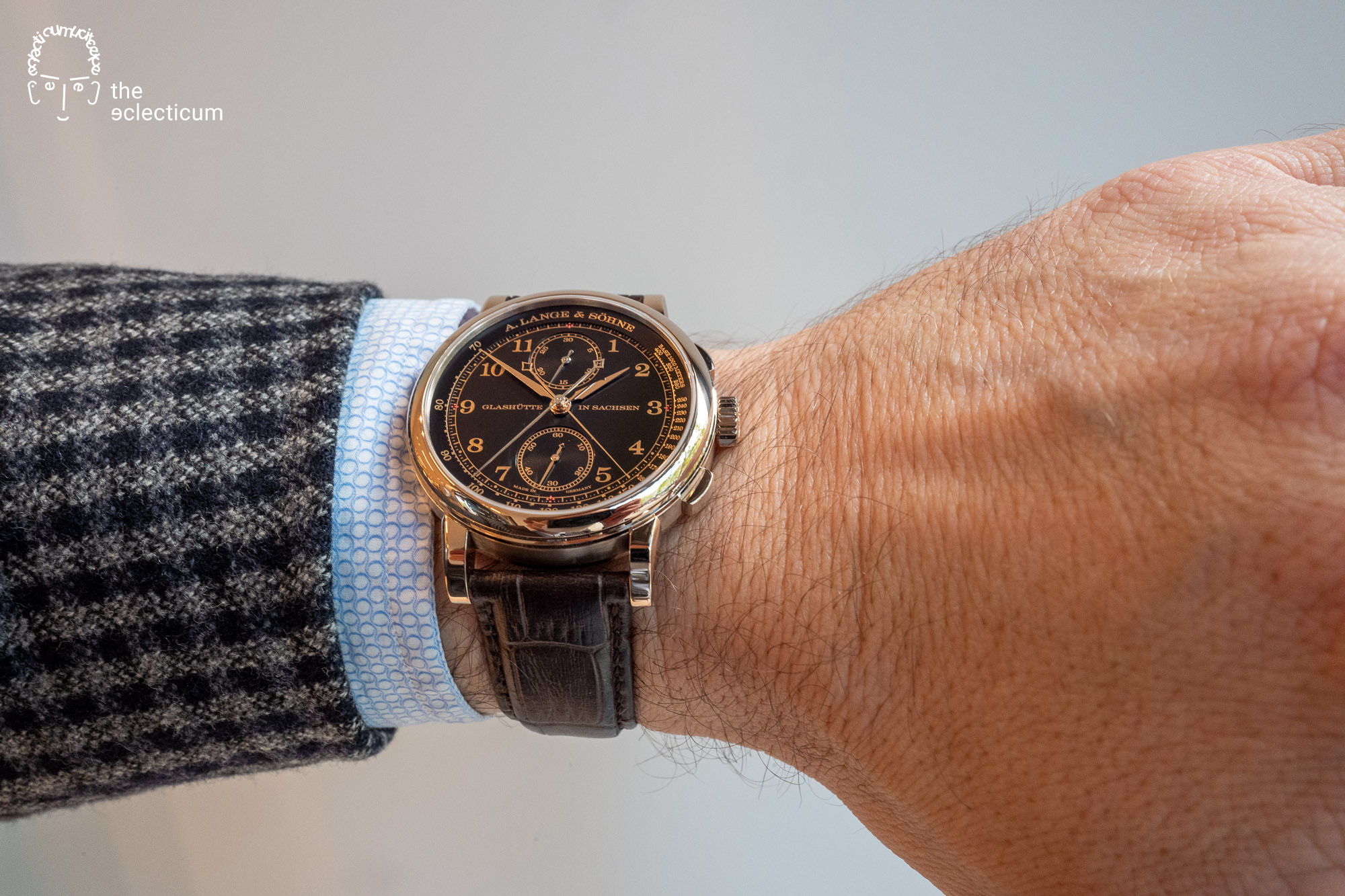 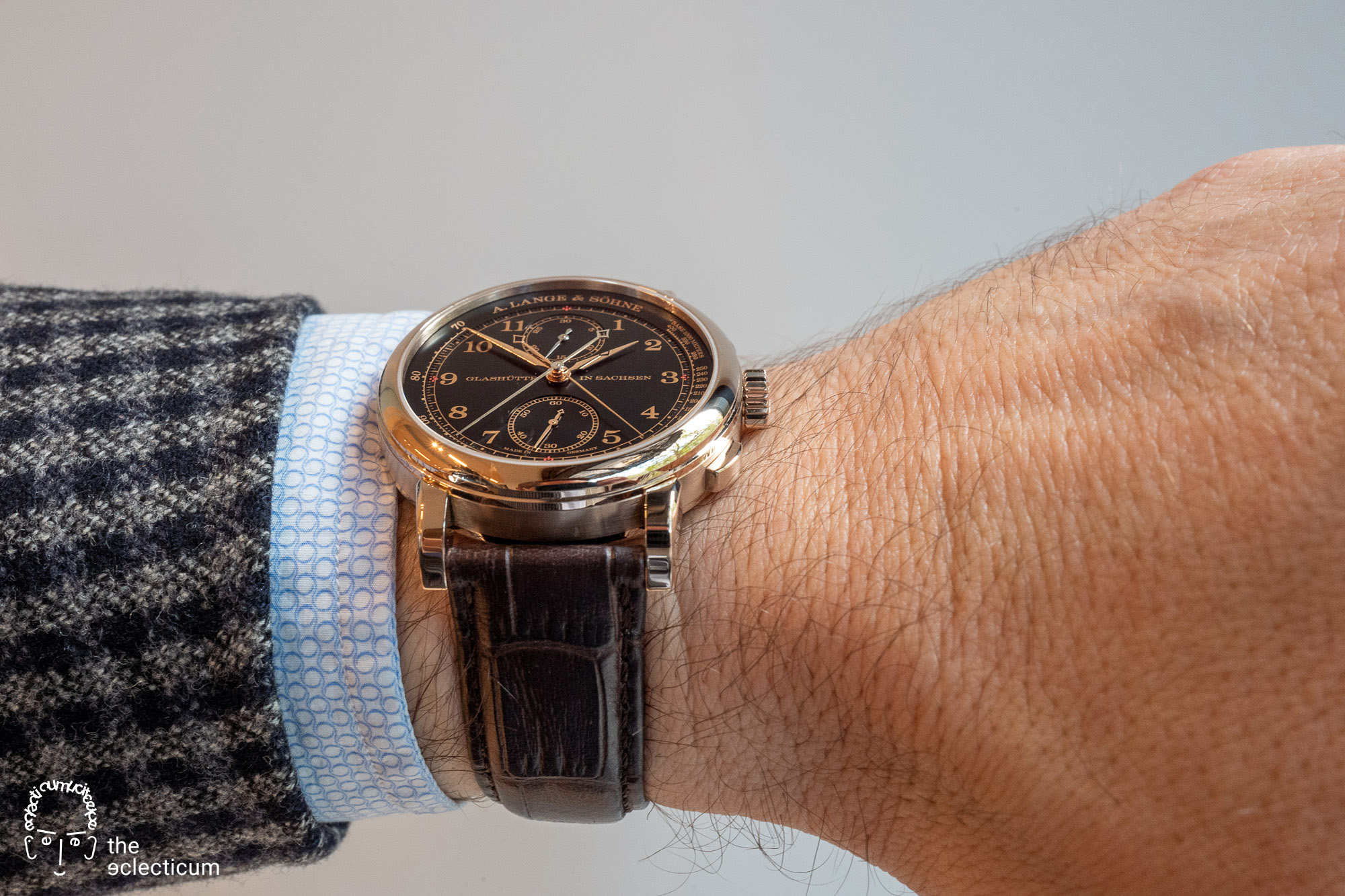 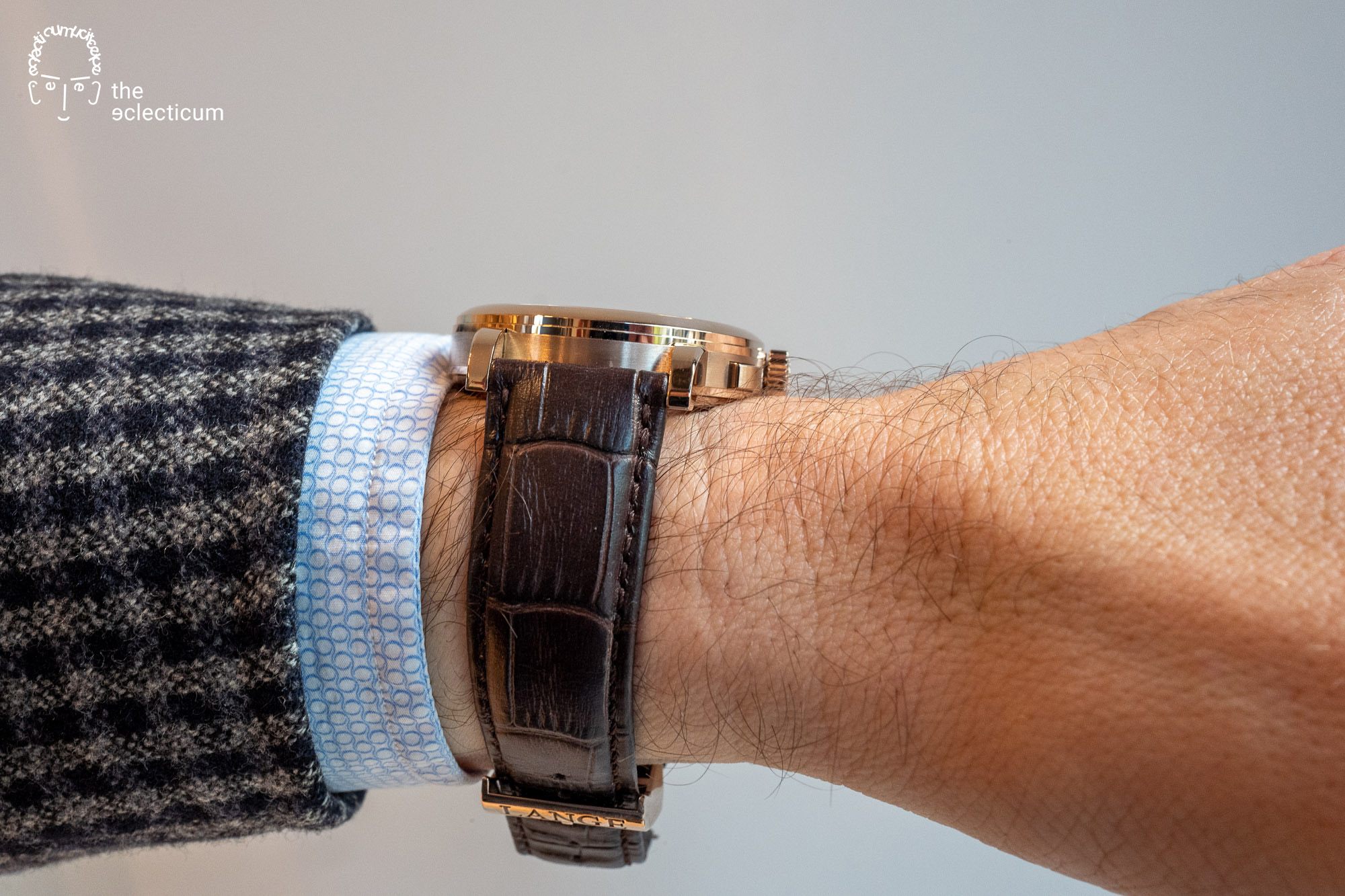 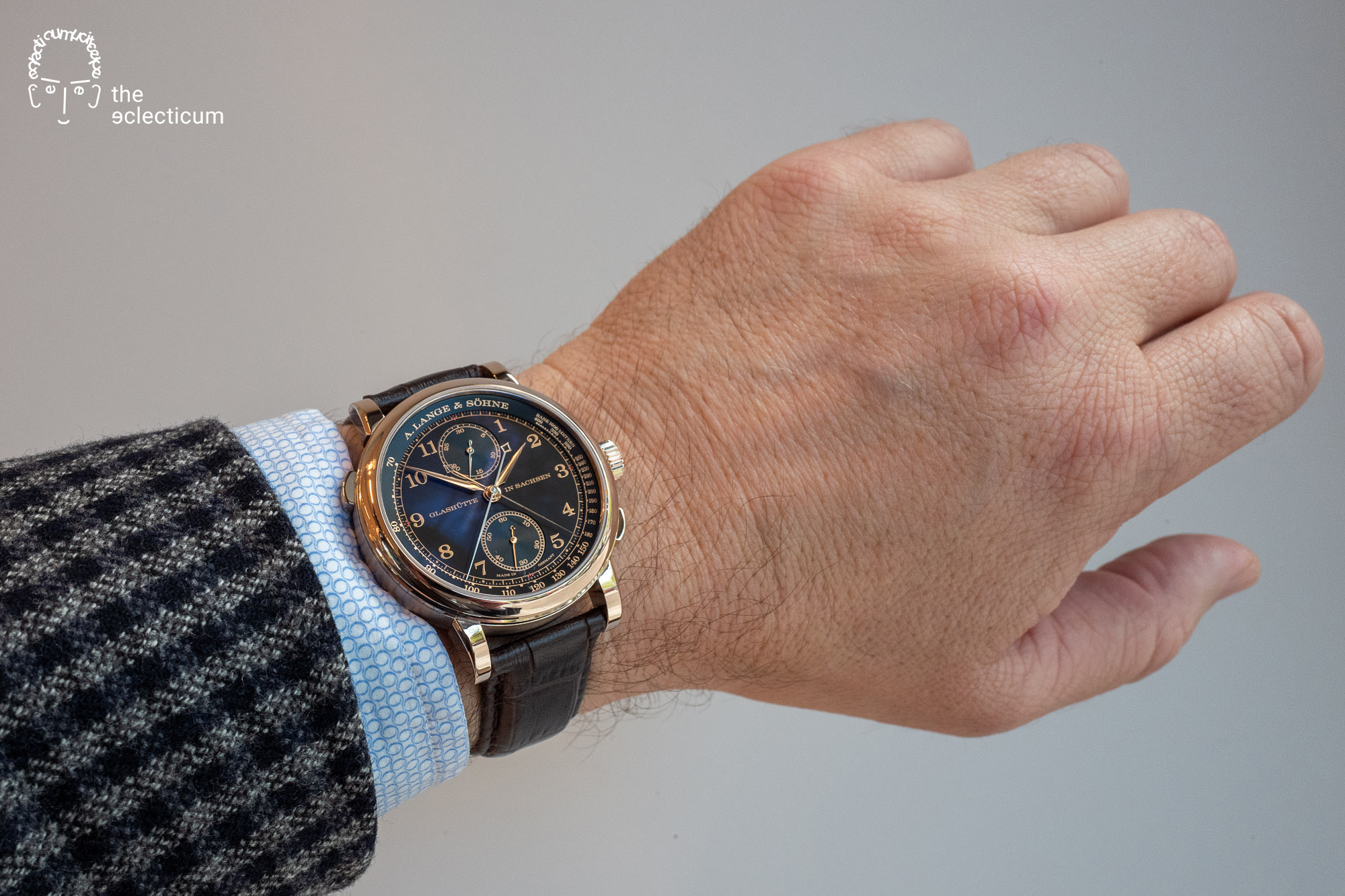 The new L101.2 manually would calibre features everything I like so much about chronographs from Lange, no matter which one you choose. But at the same time, it looks different, almost confusing on the first view – especially on live pictures I saw on the internet.

A different (familiar yet odd) finishing in major parts of the movement and a different engraving (almost bold, at least on the official pictures) on the balance cock and the chronograph bridge, that´s all I see for now.

“The raised German-silver frame parts are endowed with granular surfaces that are reminiscent of his historic pocket watches in the 1A quality category. Among other features, they had gold poising screws, screwed gold chatons to secure the bearing jewels and a hand-engraved balance cock. Today, these traditional quality hallmarks can again be found in many A. Lange & Söhne timepieces.

All upper sides of the moving parts of the rattrapante chronograph, such as levers, springs, and jumpers, are decorated with straight graining while the chamfers are polished. Chamfer polish-ing acute interior angles a particular challenge. They are elements that reflect the immense manual work involved in such movements. The required degree of perfection is achievable only by experienced finishers with sharp special tools. Great caution is needed during the assembly of the granular frame parts since the sensitive surfaces do not tolerate even the most minute scratches.

All of the fine lines of the free-hand engravings on the balance cock and the chronograph bridge as well as the inscriptions on the bridges are black-rhodiumed. The dark hue of the galvanically applied coating adds plasticity to the engravings. The contemporary evolution of traditional finissage techniques reflects the manufactory’s ambition to never stand still.“

To get some context like this: “… granular surfaces that are reminiscent of his historic pocket watches in the 1A quality category …” helps to understand the idea behind.

I am sure the finishing is exquisite, but I haven´t seen it in person and therefore I won´t judge for now. 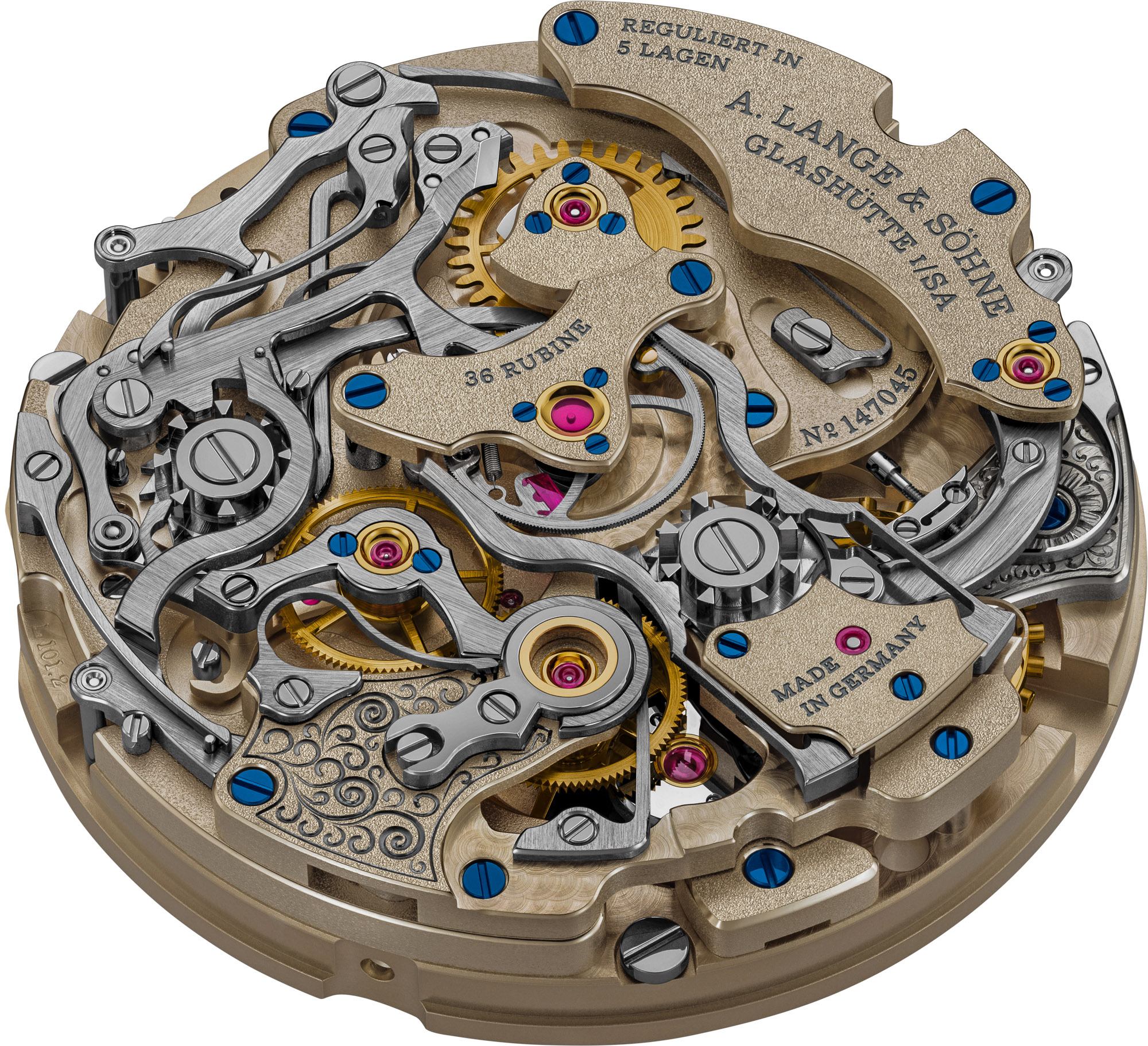 Side note: In case you are (still) wondering why I didn´t show any case back photos. I had the pleasure (yes, it still was) to handle a prototype without movement, only.

Only one watch comes to my mind, which is an Rattrapante (Split-Seconds Chronograph) as well, but a Swiss one from Geneva. 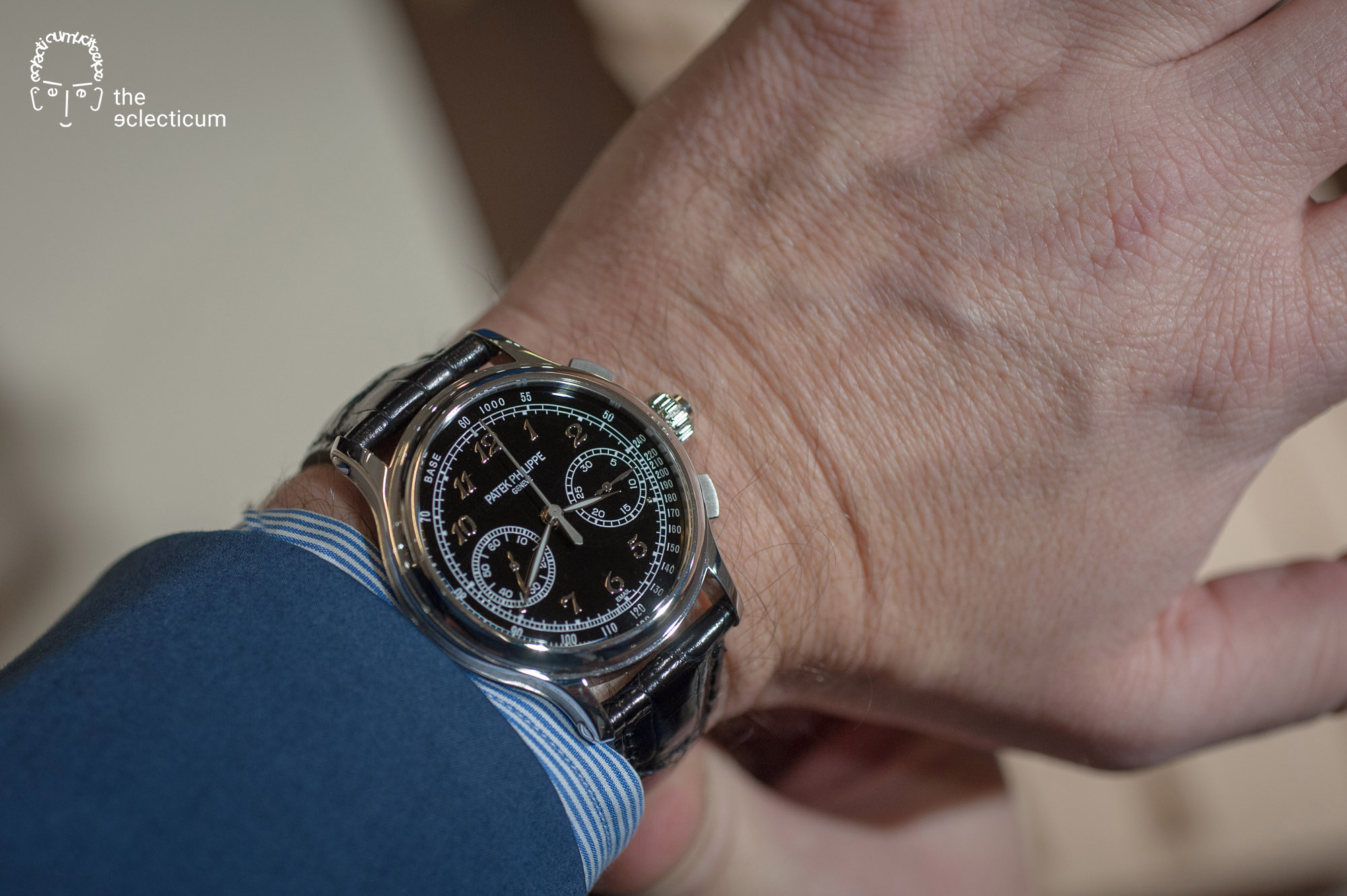 The Patek Philippe Ref. 5370P is the closest rival in my book and yes it´s a tough one, not only because of the coaxial pusher button.

By comparison Patek´s case diameter is 0.2mm smaller, but 0,96mm higher (PP 41mm, 13.56mm). Honestly, I expected something more different. Not because of how they wear on my wrist – both great -, but there is a slightly different approach of fine watchmaking in Saxony/Germany compared to Swiss `Geneva Style` and quite often it leads to (slightly) bigger watches ‘made in Germany’. 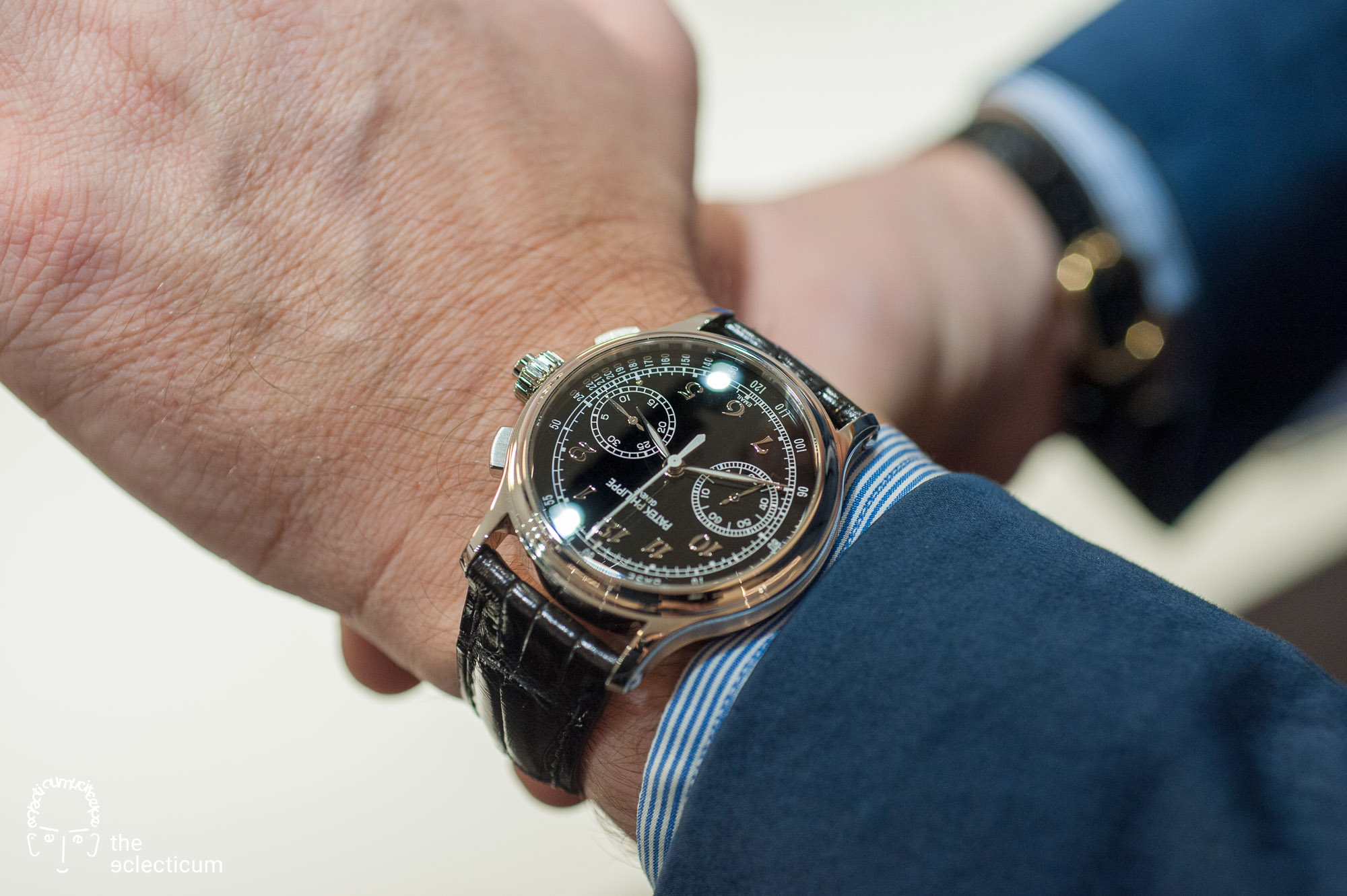 Applied Breguet numerals on a (luscious) black enamel dial is much to my taste and I am not the only one, for sure. 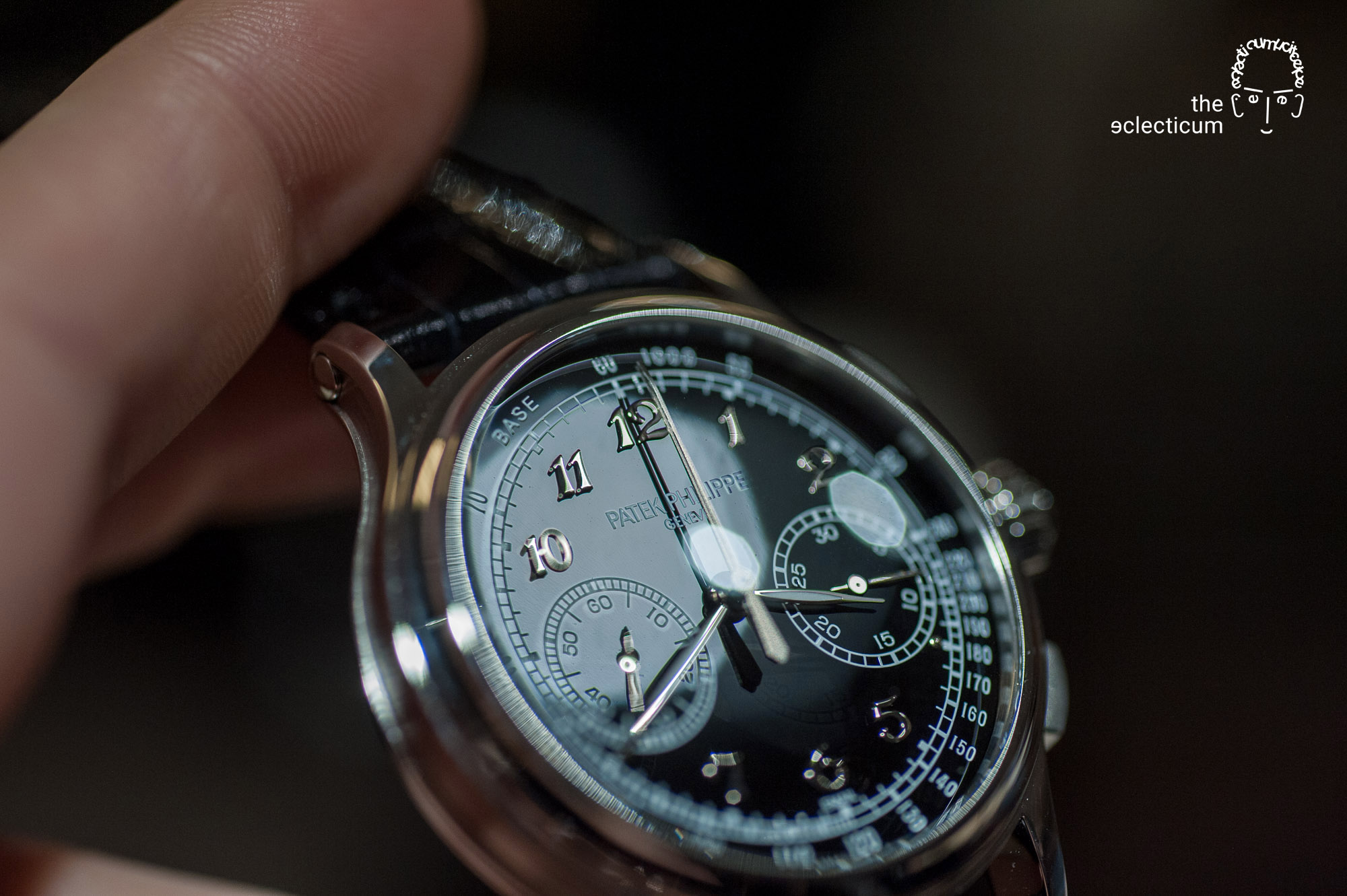 On the back one can admire the remarkable beauty of Haute Horlogerie from Geneva/Switzerland – watchmaking at the peak of today, at least when we think about regular production pieces. There is fineness and finesse honouring the own history of fine watchmaking and yet modern technical solutions. Bravo!

Still there is less depth and layered architecture like we know it from Lange chronographs, because of different approach in constructing movements. It´s not about good or bad. It´s a matter of taste and preferences, once more. 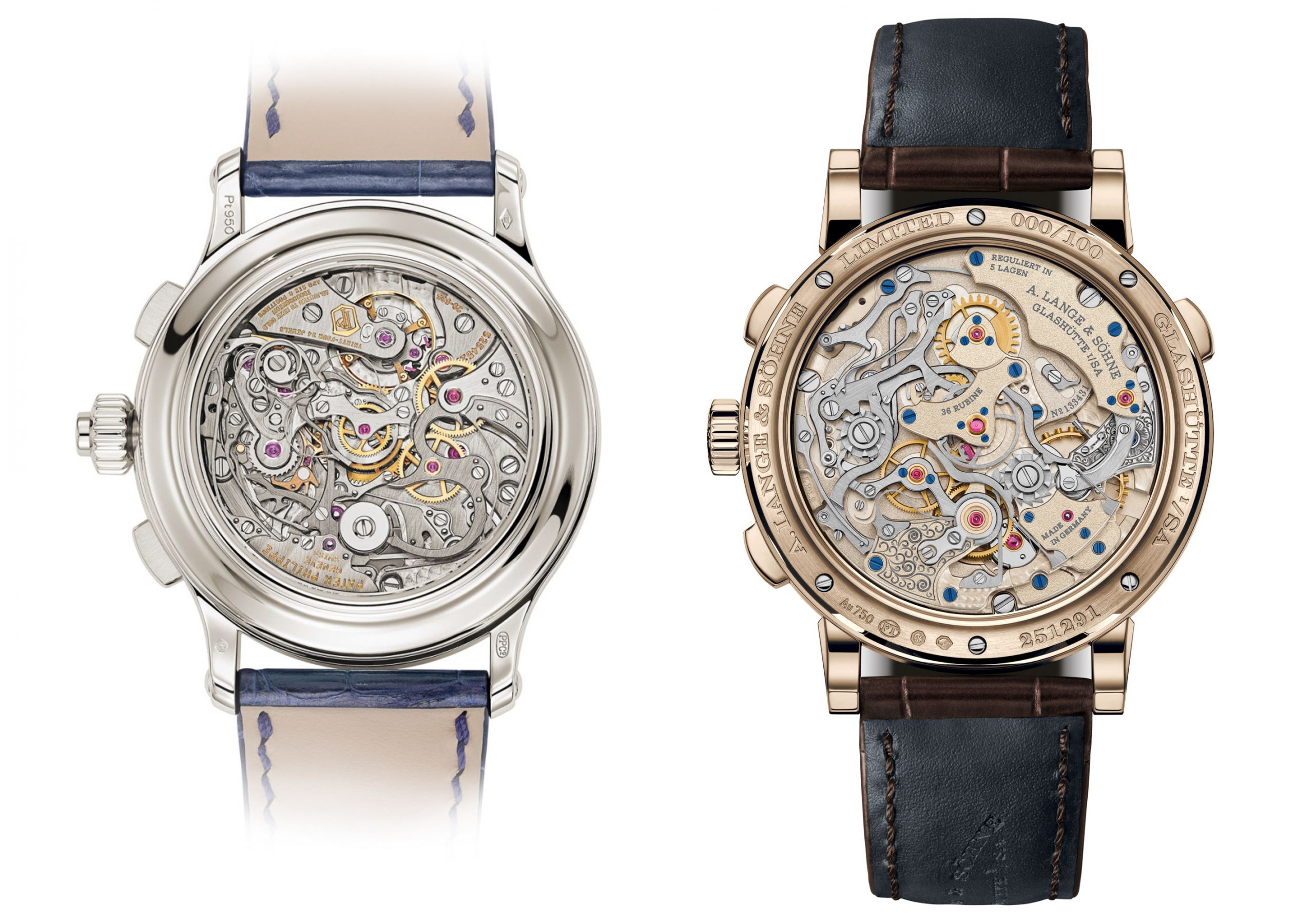 (Patek on the left, Lange on the right)

Both watches are great for what they are, and they represent their brands very well. As a (truth to be said) spoiled and matured connoisseur some details come to my mind, which I would like to add/change to make both even more appealing – at least to my eyes:

In my book, both are ´winners` and highly addictive! Which one would I like to add to my collection? Both to be honest, but Lange first. Mainly because of the huge premium one must pay for the Patek.

the eclecticumSnapshot (s) – Machine of the day: ´UR-111C` from URWERK
Scroll to top