Gold Dust: 15 years MIH Watch – A Milestone and a Pacemaker of the rarest sort

There are signs for a relaunch, but what would this ‘new’ watch be without Ludwig Oechslin, Paul Gerber – and even without the MIH? 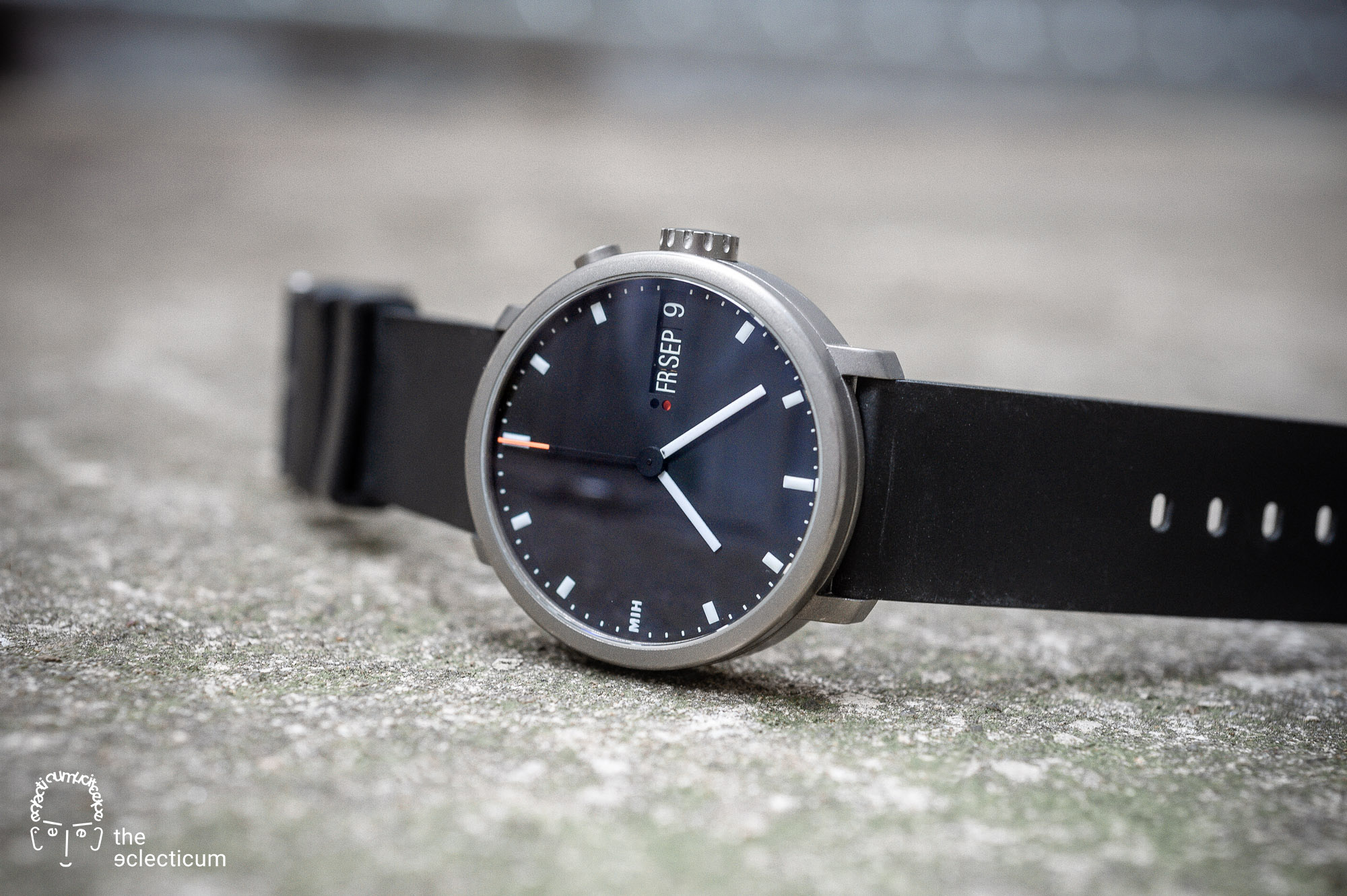 Every once in a while, we see a watch and we instantly know it: this is a milestone and a future classic. One such example is the legendary MIH Watch, created by a dream team of eminently skilled people, as a fundraiser project for the namesake watch museum in La Chaux-de-Fonds. A complication stripped down to its bare essentials in an intellectually very intense way like never before, a reduced design and a quite affordable price tag – this was a winner. The watch quickly developed into a collector’s treasure and became an instant classic. The last watch was sold in April 2020, an impressive 15 year product life cycle!

Recently we noted a new initiative for a relaunch, there are frequent social media posts, and the relaunch was also published on the MIH Watch webpage. As you probably can imagine, this got our attention and we tried to get some more information – with mixed results, giving us no clear indication as to how serious the relaunch initiative is.

More on this later, because before we would like to look in the past of the first one. 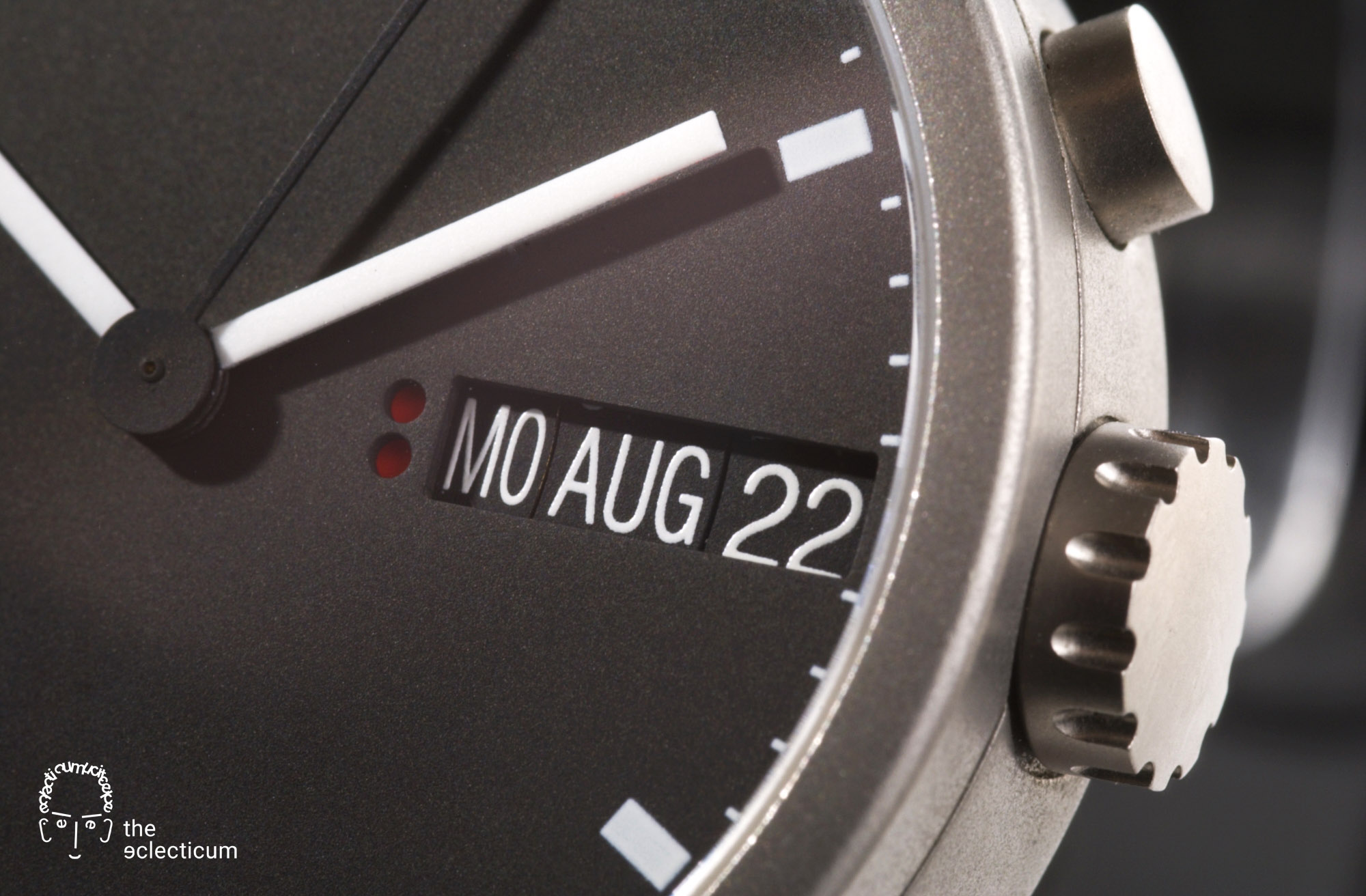 It was on 9 September 2005 (a day clearly chosen for the nice symmetry it created on the calendar indication ;-)), when the MIH Watch was presented at the Musée International d’Horlogerie (short, well, MIH) in La Chaux-de-Fonds by an eclectic team to say the least. Preceding that was an intellectual and constructional tour-de-force masterminded by polymath and exceptional horological thinker Ludwig Oechslin, back then conservator at the MIH, and translated into productionally viable form and produced by AHCI member and equally acclaimed watchmaker Paul Gerber from Zurich. A reduced, clean and no-frills design by Christian Gafnercomplemented the constructional stringency in a congenial way. The entire project was managed and communicated to the outside by Beat Weinmann, which in hindsight (and particularly if we look at the most recent development, see below) was a crucial element in its success. 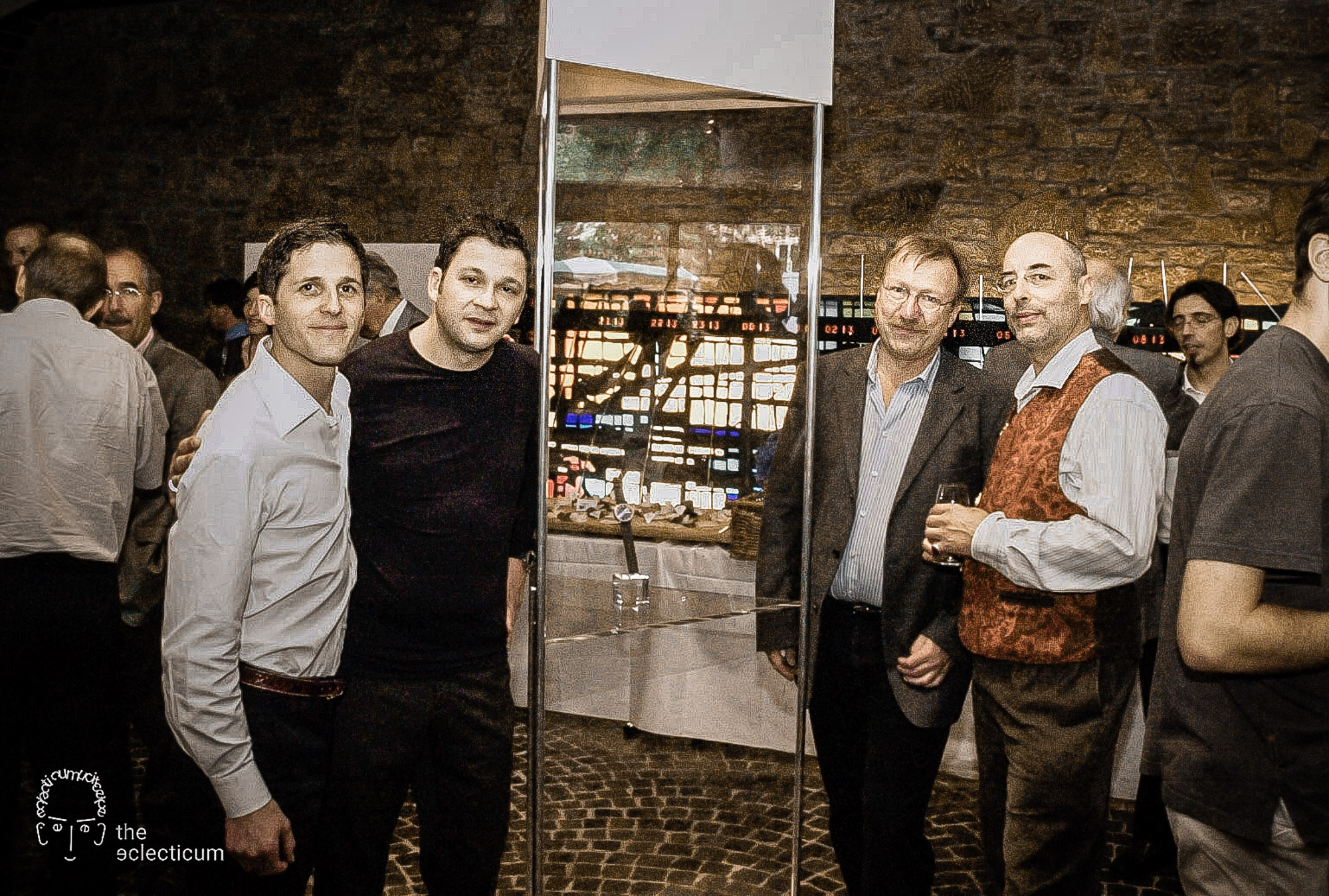 (The ‘Dream Team’ behind the MIH Watch (during its presentation on 09 September 2005 at the MIH, from left): Beat Weinmann, Christian Gafner, Paul Gerber and Ludwig Oechslin)

In summary: it was this compelling blend of technical intellectualism, design and the caché of its makers which laid the foundation for the appeal of the MIH Watch.

A holistic and synergistic admixture of technology and design, and heritage

On the technical side it comes with a rare complication, an Annual Calendar, but what a sophistication:

The reduced-to-the-max approach to the calendar was only possible because Oechslin cleverly integrated both the base movement’s date and hour gears as drivers for the calendar, resorted to using only gears, but not springs and levers for the construction, thereby enabling even backwards time-setting across the date change. 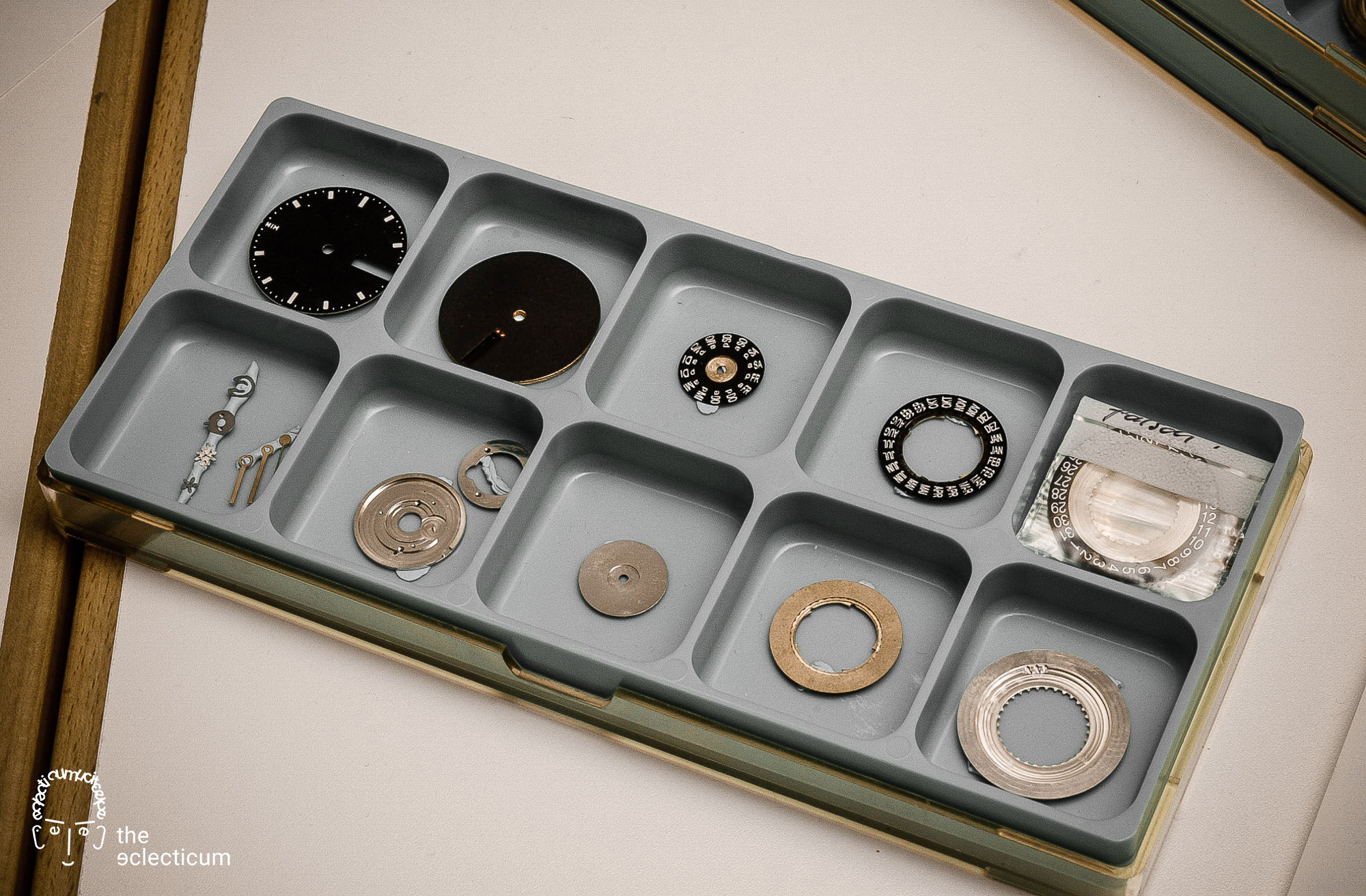 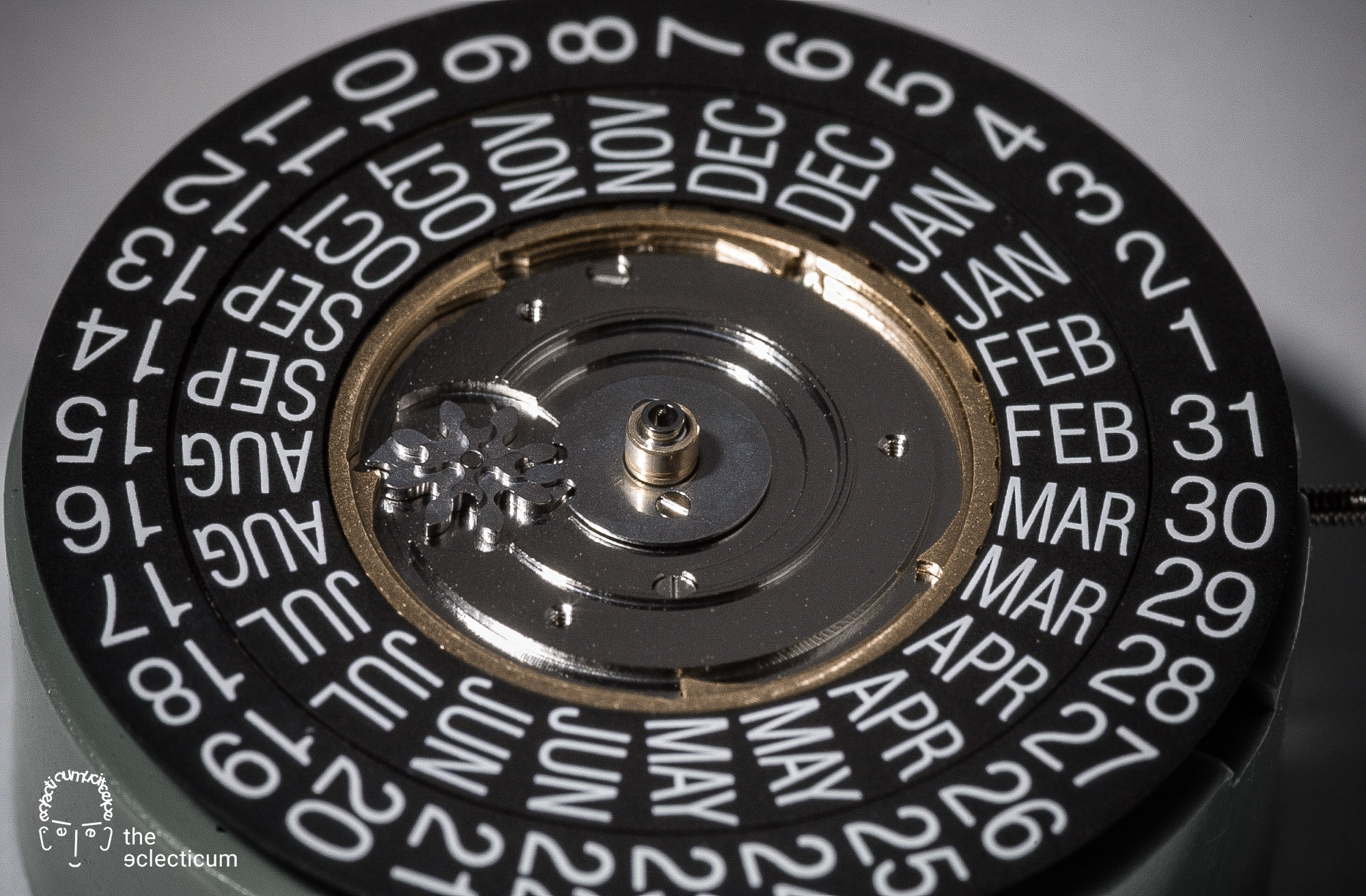 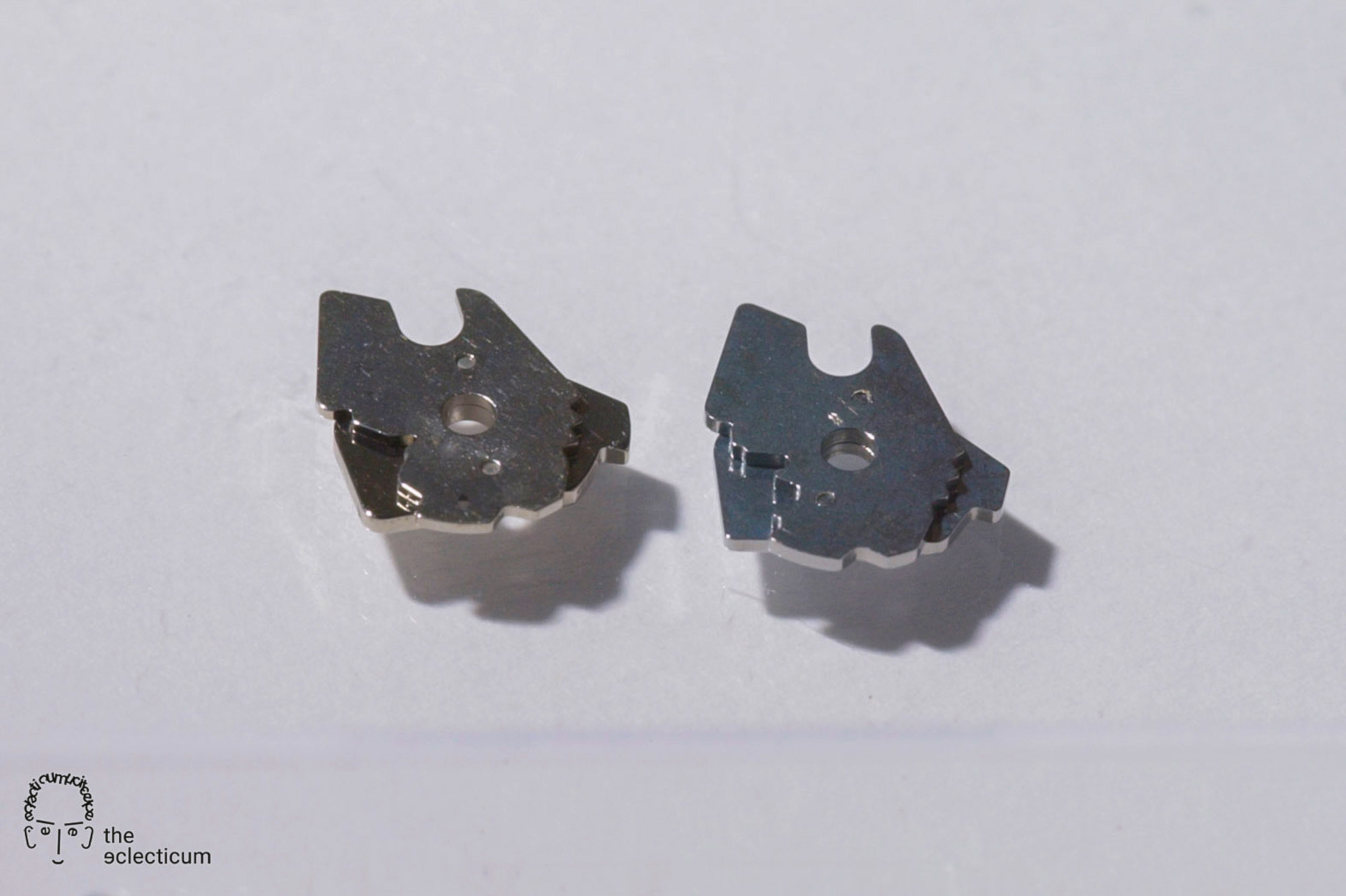 (Mechanical sophistication: (top, middle) the 9 moving parts of the Annual Calendar by Ludwig Oechslin; (bottom) the chronograph cam wheel modified by Paul Gerber (right) vs. the original Valjoux 7750 one (left))The design recalls elements of tool watches, such as pilot’s watches, technical instruments and the straightforwardness of the Bauhaus school of aesthetics. It is not only merely reduced, it is also timeless and refined up to the smallest detail: take for example all the inner and outer horizontal radii of the case, the lugs, the crown and the pusher: they are all centred on the main axis. 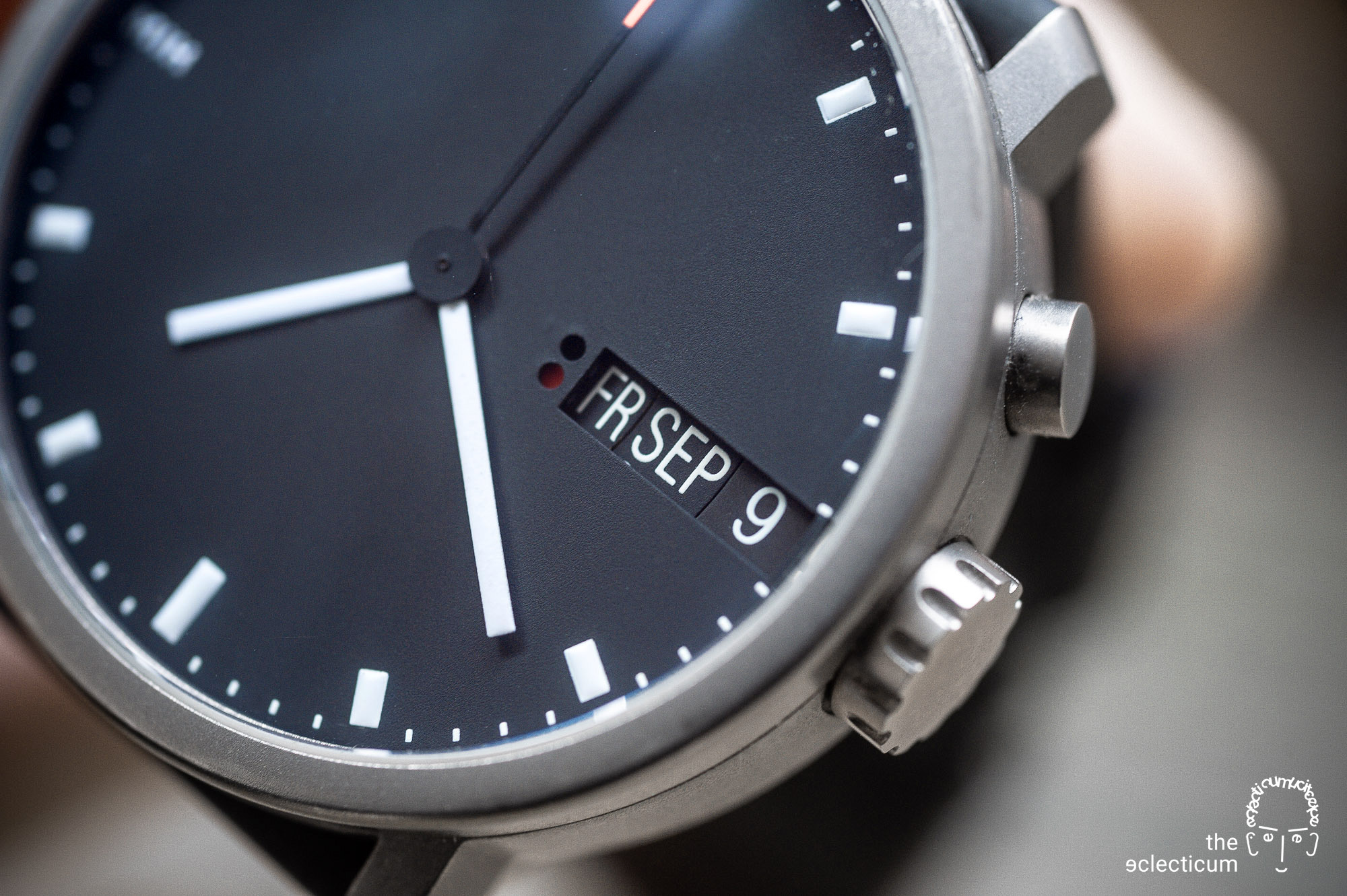 The MIH Watch is also witness of an important milestone in consumerism: it was conceived shortly after the time Naomi Klein published her ground-breaking book ‘No Logo’, and the issues discussed in her book certainly influenced the makers of the MIH Watch as well: the MIH logo is subtly integrated into the dial, as the 9 o’clock index. 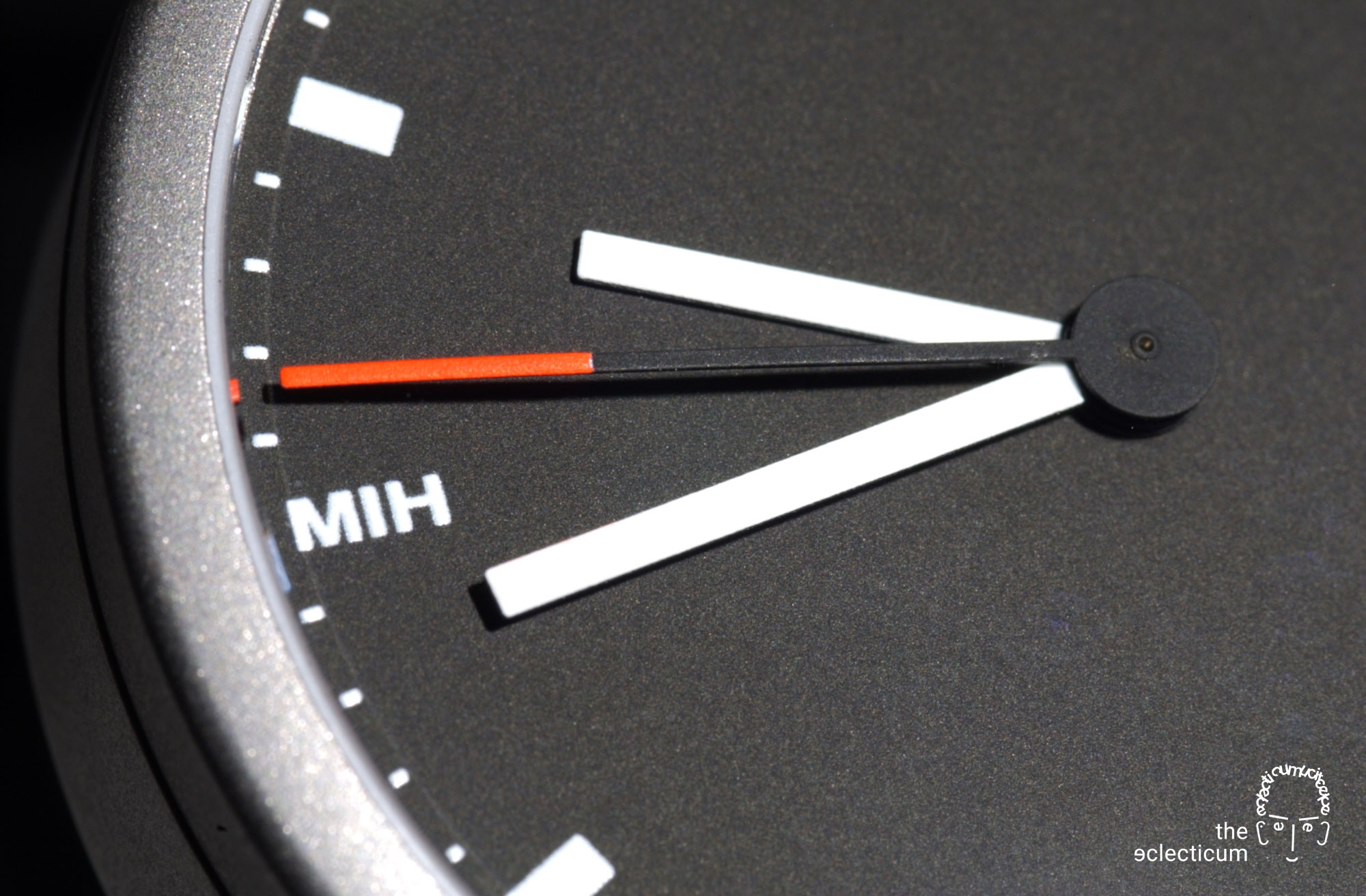 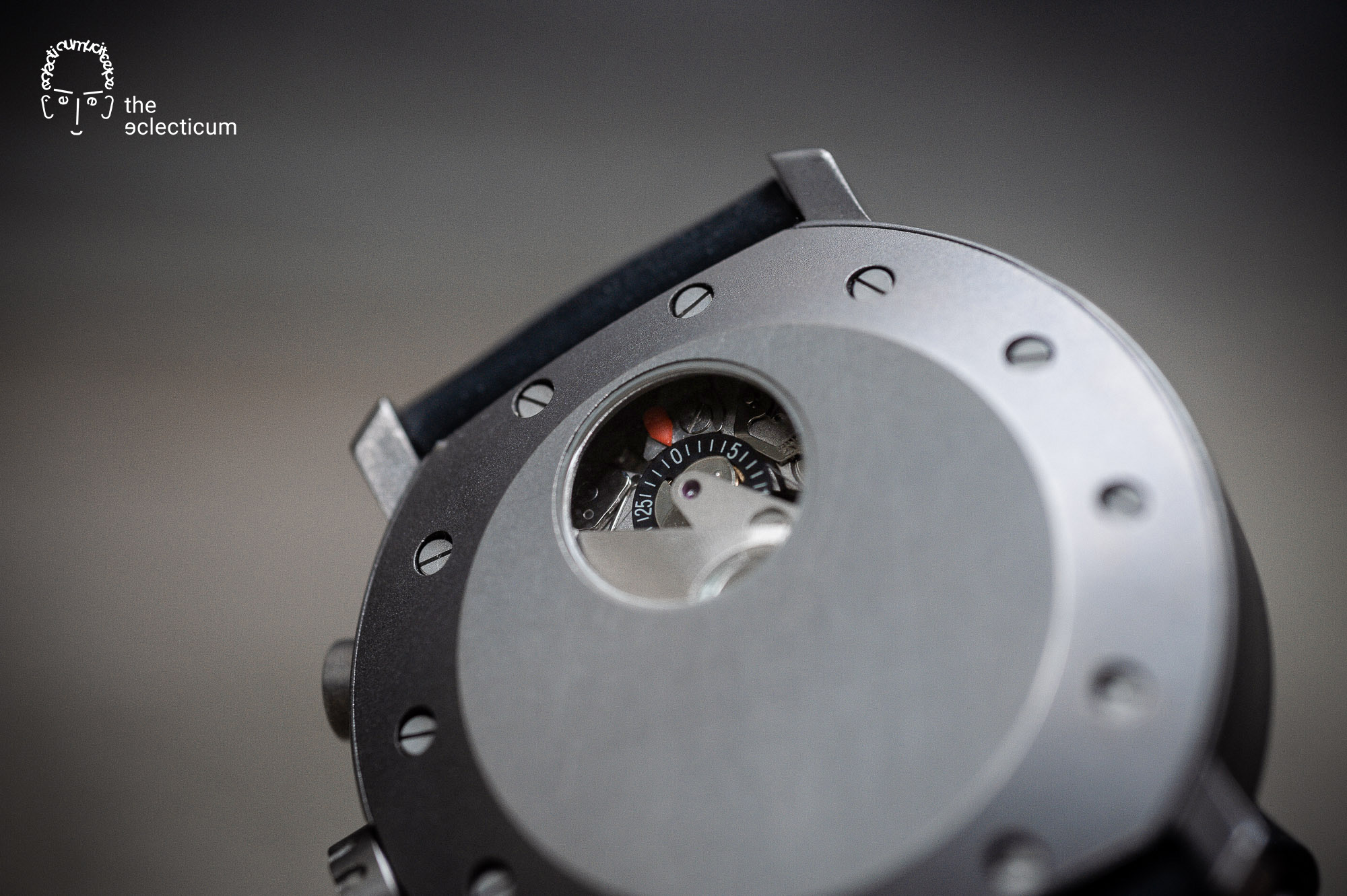 ((top) MIH logo masked as 9 o’clock index; (bottom) chronograph minute counter on the back)Paul Gerber was not only tasked with translating Oechslin’s ideas into something which would work on the bench (Oechslin is famous for not considering the technically necessary production tolerances in his constructions), he also ‘sneaked’ the monopusher chronograph into the watch and was overall responsible for producing the watch. All parts came from Swiss or European suppliers (again a nod to the blooming criticism towards globalisation), which were transparently listed on the MIH Watch homepage – a novelty for the usually very secretive Swiss industry.

A Milestone and a Pacemaker

In our view the MIH Watch has everything which makes a gamechanger, as its influence on the watch industry cannot be underestimated: it introduced what at first view seems to the contradictory: the ‘simplification of complications’. But if you look at it, you’ll find that there is a lot truth in that characterisation: the ‘complication’ mostly takes place in the mind (of Ludwig Oechslin, in this case), through an intense process called synergy which then leads to unorthodox, magnificently intellectual approaches to astronomical functions. Sure, this needs some efforts on the side of the collector as well to slowly grasp the beauty and complexity (sic!) that lies in such constructions – that’s certainly not as easy as taking note of a mind-blowingly high component count.

The second dent the MIH Watch made in the watch industry is related to the former: simplification was a thing that worked – the subsequent establishment of ochs und junior as a brand serving as an outlet for the creativity of Ludwig Oechslin can be directly attributed to the success of the MIH Watch. Again, Beat Weinmann served as congenial project managing partner. 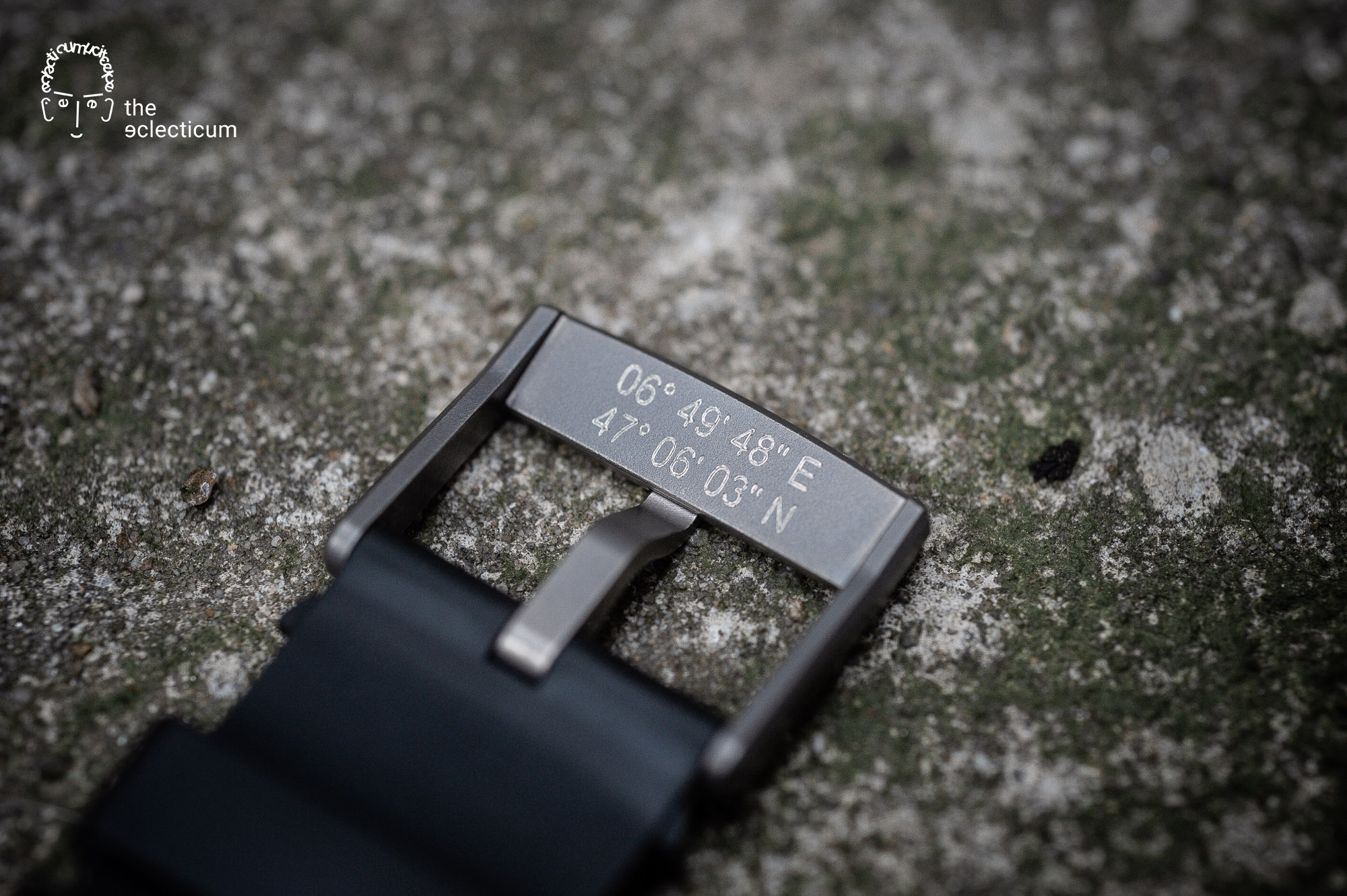 Finally, with the MIH Watch transparency of production chains somehow gained acceptance, not only for ochs und junior, but also other manufactures followed suit, like Habring2, recently Czapek, MING and other mainly smaller brands.

The MIH Watch was sold directly at the MIH as well as Lucerne-based retailer Embassy, between September 2005 and April 2020, an impressively long period for a watch that has seen no apparent design or technology change nor price increase.

A new start – but are the gods really smiling upon it?

A few of you might have also seen recent notifications on social media, mainly, and on the MIH Watch website on an upcoming new start for the MIH watch – like this:

What caught our eyes were two things: first, we were a bit puzzled that shortly after presentation of the current generation MIH watch, the MIH Gaïa Watch, the old one would be relaunched, and second, a certain ‘ad hoc’ character of the communication, something that never happened during the time leading to the inauguration of the MIH Watch (when public relations was driven by Beat Weinmann). 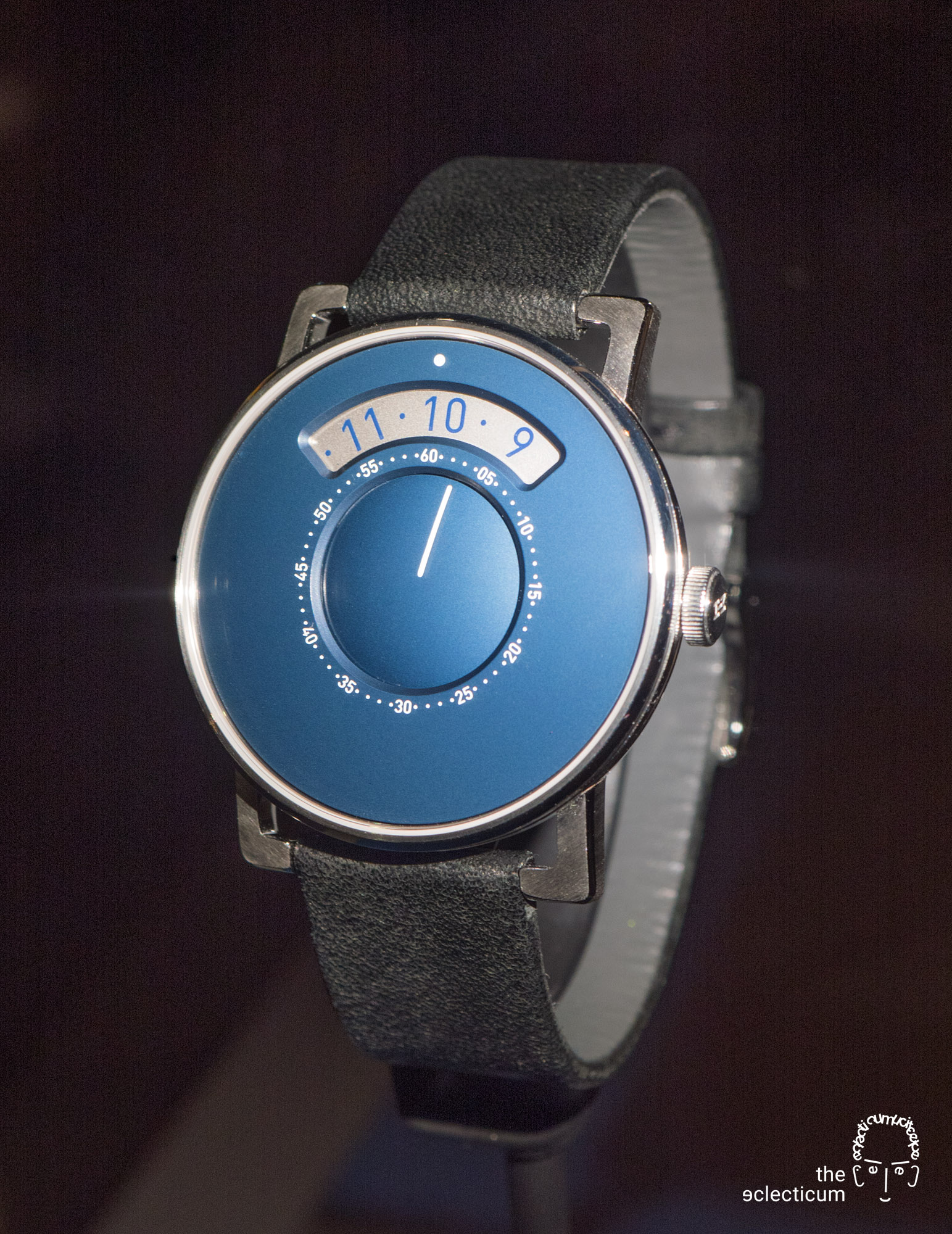 We dug deeper, talked to the people behind the original (first!) MIH Watch (some of the old team – Christian Gafner, the designer, and Embassy as marketing and sales partner (and also probably investor)) and also those who work on the remake (at least we tried). Here is the outcome as it stands on the date of publishing this article:

Confused? Well, nobody can blame you. We tried to lift the fog a bit, but at times were given quite ambiguous answers which just added to our confusion, so we decided to present the informations as it stand now. Until now, neither launch date nor final price are known, and little concrete information is given potential customers in the first place. All this, combined with above, do not exactly inspire confidence. 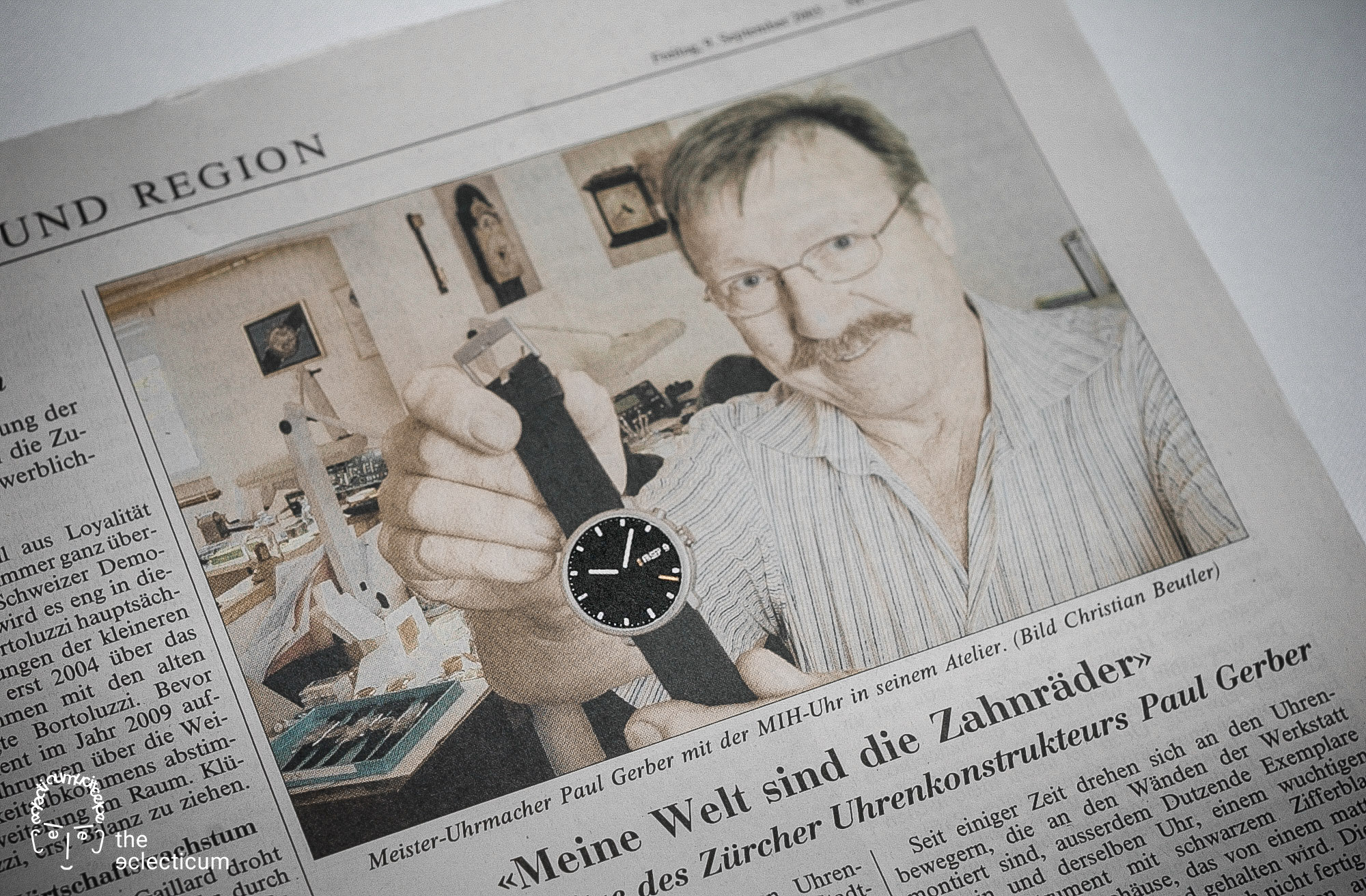 (No longer part of the team: Paul Gerber)

We thought that with the admission of Mr Gafner and Mr Kanazawa to the ochs und junior team the circle somehow closed, but from the information so far we conclude that this is not the case.

The entire situation points to the eminent importance of competent project management with a fixed strategy and clear communication – if you think about the bumpy road ochs und junior is currently following after Beat Weinmann left the company, you have a kind of a déjà vu here, and this not a positive outlook.

For us personally, the newest developments around the MIH Watch gives us a sad taste as a lot of the former spirit seems to be missing – which was crucial. Until the team behind the relaunch is not forthcoming with more precise information on the project, we fear a lot of this is still vapourware.

Side note Ornatus Mundi: It was a milestone also for me personally, I had the honour of test-driving a pre-production prototype for some time, accompanied the launch events and have remained friends to many of the original team behind.

It was a watch that on my return flight from the presentation was noticed by a fellow passenger, and we had an interesting conversation about it.

It was a watch of which friends report that it was left on the table at a robbery where thieves took all the OMEGAs and other watches from well-known brands, but left the real marvel untouched.

It was also a watch which taught me more about the long way between idea and product in the watch industry, with a number of fascinating lessons learnt from which I profit immensely until today. 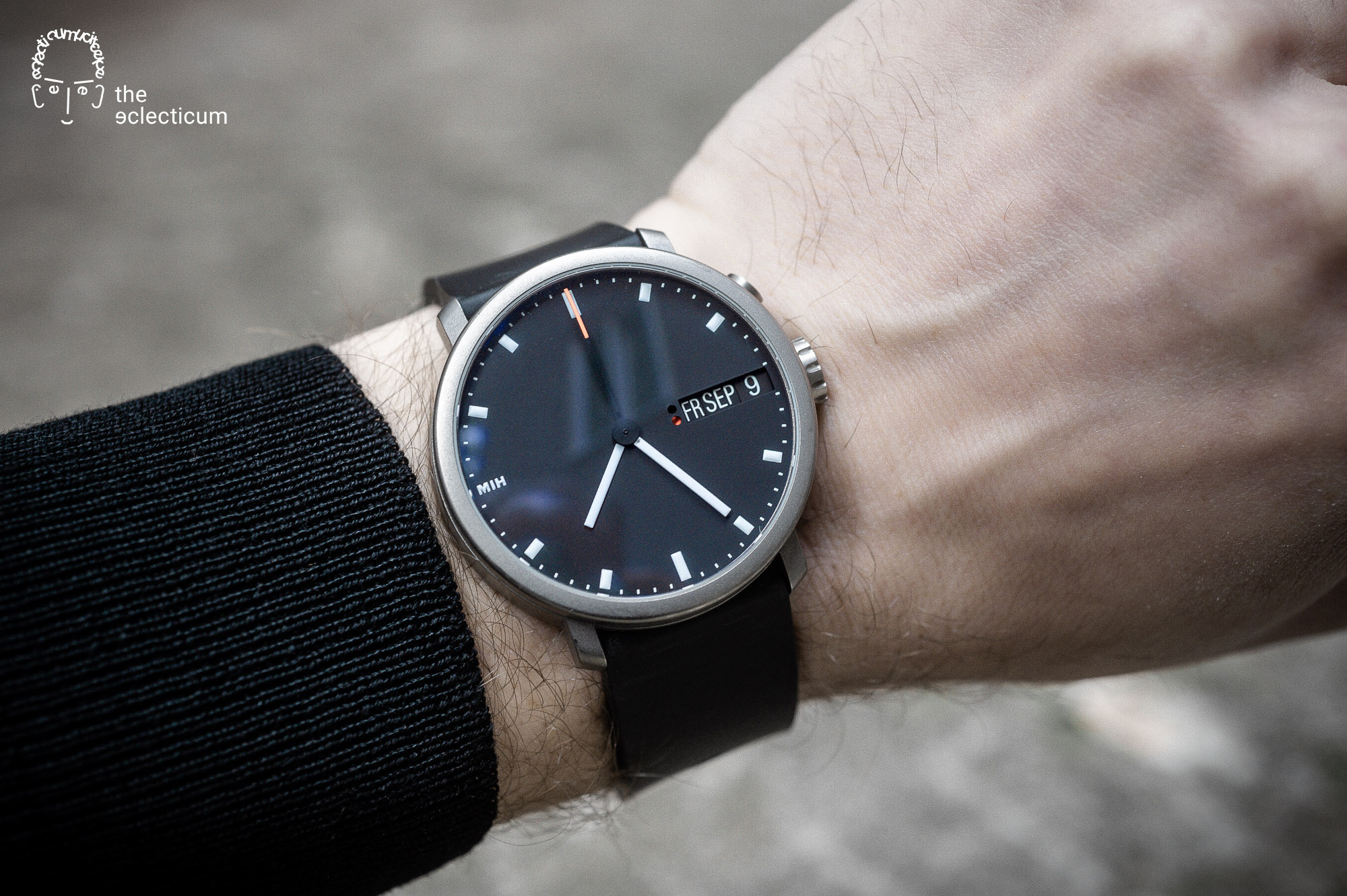 And finally, it is a watch we really deeply love and enjoy wearing. And all this at the original price of only CHF 5,000. That was the final shocker as well… let’s hope the glitches in the relaunch are just that – teething issues which quickly will be solved!

We’ll keep an eye on the matter, so  stay tuned!