That Vianney Halter is anything but just a (very good) watchmaker is legend. His timepieces are a distillation of so many of his interests and inspirations, primarily the works of path making watchmakers such as Antide Janvier or Abraham Louis Breguet, but also aviation, music and a lot of other sources. This time however, he has outdone himself: Vianney Halter’s new Deep Space Tourbillon Resonance shifts his whole watchmaking work onto a whole new orbit: it is the result of more than two decades of observation, experimentation and studying, and a timekeeper (in the best sense of the word) which does not only excel at that, but manages to embrace physical phenomena of our Universe and condense them to wrist-size, in ways most mesmerising and entertaining.

But first, what is it?

The Deep Space Tourbillon Resonance is – as the name already hints – a tourbillon which makes use of the physical incident of resonance. But not only that, Halter managed to realise this in a triple-axis tourbillon – a mind-boggling feat:

The axis structure is layered in concentric cages:

The whole 3 axis system counts 371 individual parts, amongst which are 42 polished curved pillars that connect the bridges:

For this prototype, the dial was developed as a no-nonsense tool, and directly inspired by the Vernier calliper. The Hours and Quarters can be read in the top aperture. At the bottom aperture one can read the supplemental minutes by finding where the marks match the best. Of course, this is a prototype only, and a few improvements are still on the way to production status: a more legible dial, better power reserve (currently 65h), and else.

It took Vianney Halter more than two decades to arrive here, what has begun in the mid-1990s when he learnt piano and observed that when he hit the keys with three harmonic strings overlap, an energy exchange between the strings occurred that forced them to resonate, made possible through the solid piano frame which connected them – similar also to a tuning fork.

Side note: resonance in watchmaking is not new, and a number of the greatest scientists and watchmakers have made use of waves transmitted between mechanically coupled oscillators to stabilise going rate: Galileo Galilei, Christiaan Huygens, Antide Janvier, and Abraham-Louis Breguet. Breguet particularly experimented extensively on resonance, using different coupling strengths, and also as per George Daniels’ book ‘The Art of Breguet’ (p. 76f.) empirically proved that it is indeed mechanical coupling instead of air friction which enabled resonance. (Breguet pocket watch No. 2788 dated 1812, with two resonating, but aerodynamically isolated escapements. The watch was set to be auctioned by Sotheby’s in London on 28 October 2020, Lot #205, but was ultimately withdrawn. Image © Sotheby’s) Most famous for the use of resonance in watches today is of course François-Paul Journe with his legendary Chronomètre à Résonance (coupling through mainplate, similar to Breguet, see also here!) on the one hand, and Armin Strom or Donald Corson (coupling of balances through a carefully dimensioned and shaped coupling spring). A resonator with its own will and personality:

The first striking difference between above resonance-enabled watches is the relative positioning of the oscillators: while Breguet, Journe as well as Armin Strom or Don Corson placed their balances adjacent to each other, Vianney Halter put them, like Beat Haldimann did with his resonance clocks, on the same axis: 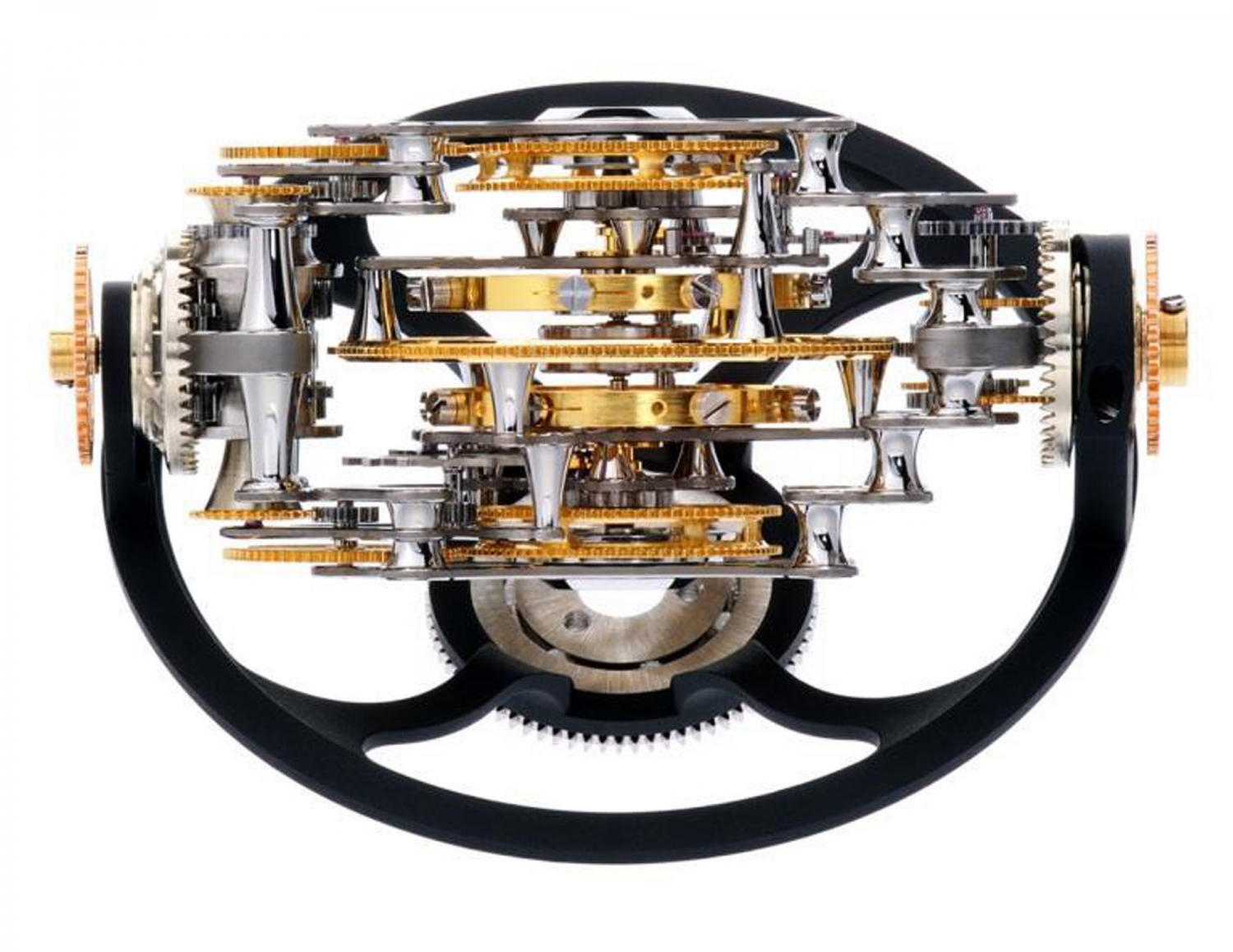 Vianney experimented with suitable, rigid materials for the connecting bridge in order to minimise wave dissipation between the oscillators. 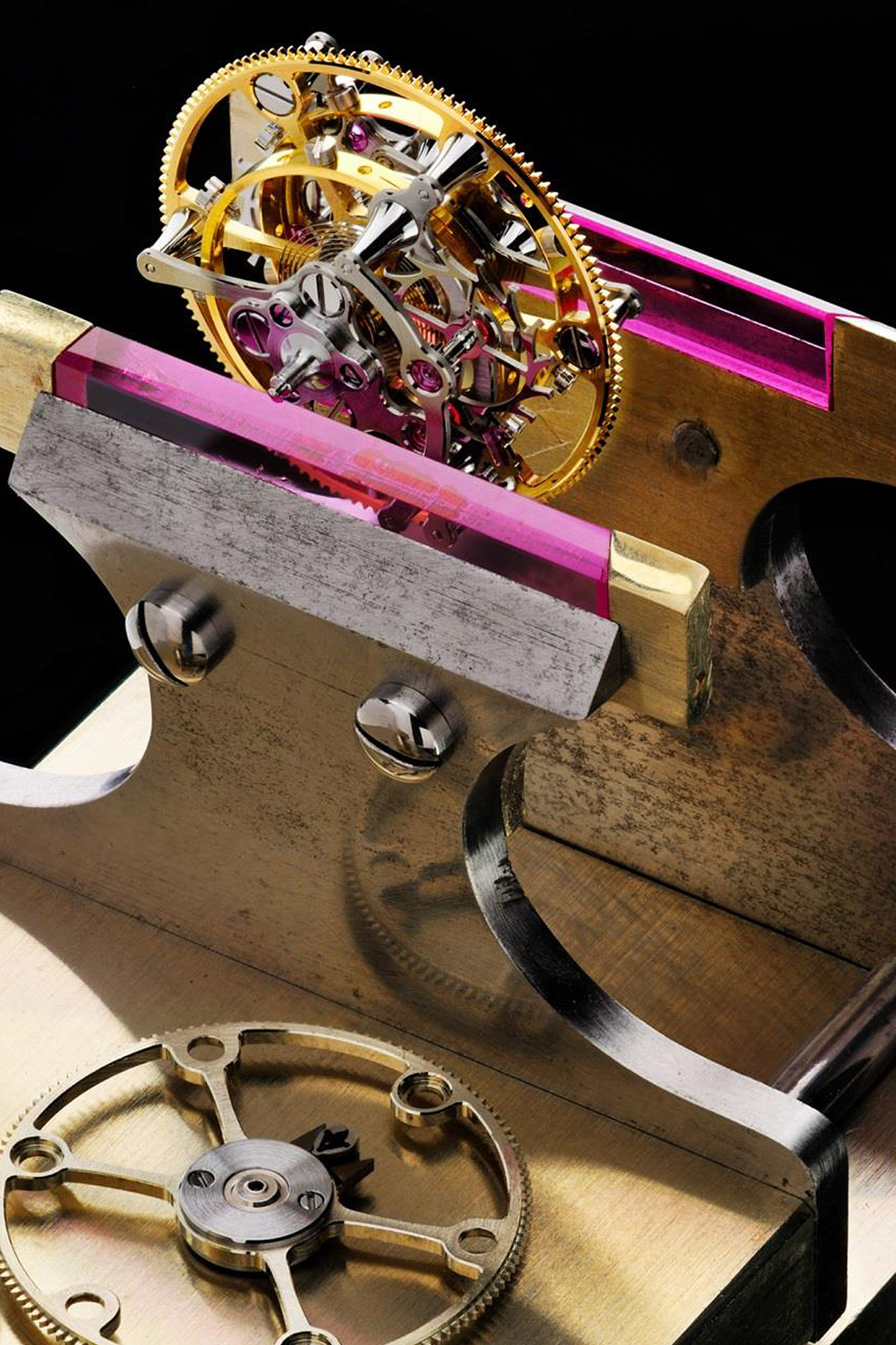 The arrangement has been carefully tuned and optimised, and shows a fascinating behaviour: as I noted already above, the frequency is ‘nominally’ 21‘600 vph – and there is a reason for that:

The two oscillators mutually influence each other until their ‘agree’ on a common frequency, but this frequency is not always the same value, and also the relative direction is different after each fresh start of the watch. 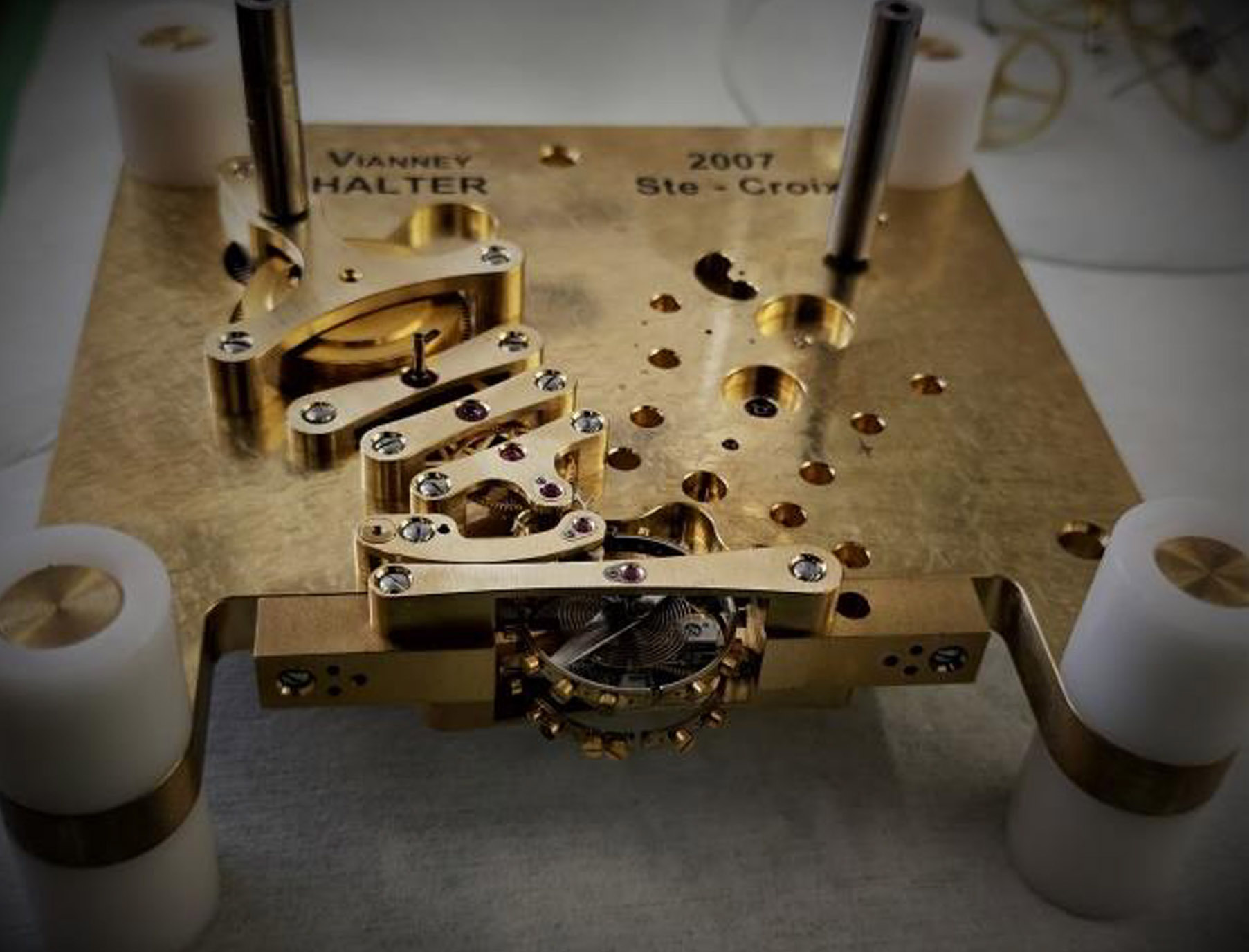 (Vianney’s resonance demonstrator platform using two identical going trains of Russian deck watches) So, there is a mutual influence and shaping of relative positioning and directions, a phenomenon intended by Vianney after he digested the sensational 2016 discovery of gravitational waves which proved Albert Einstein’s theory of relativity, and the space time continuum: 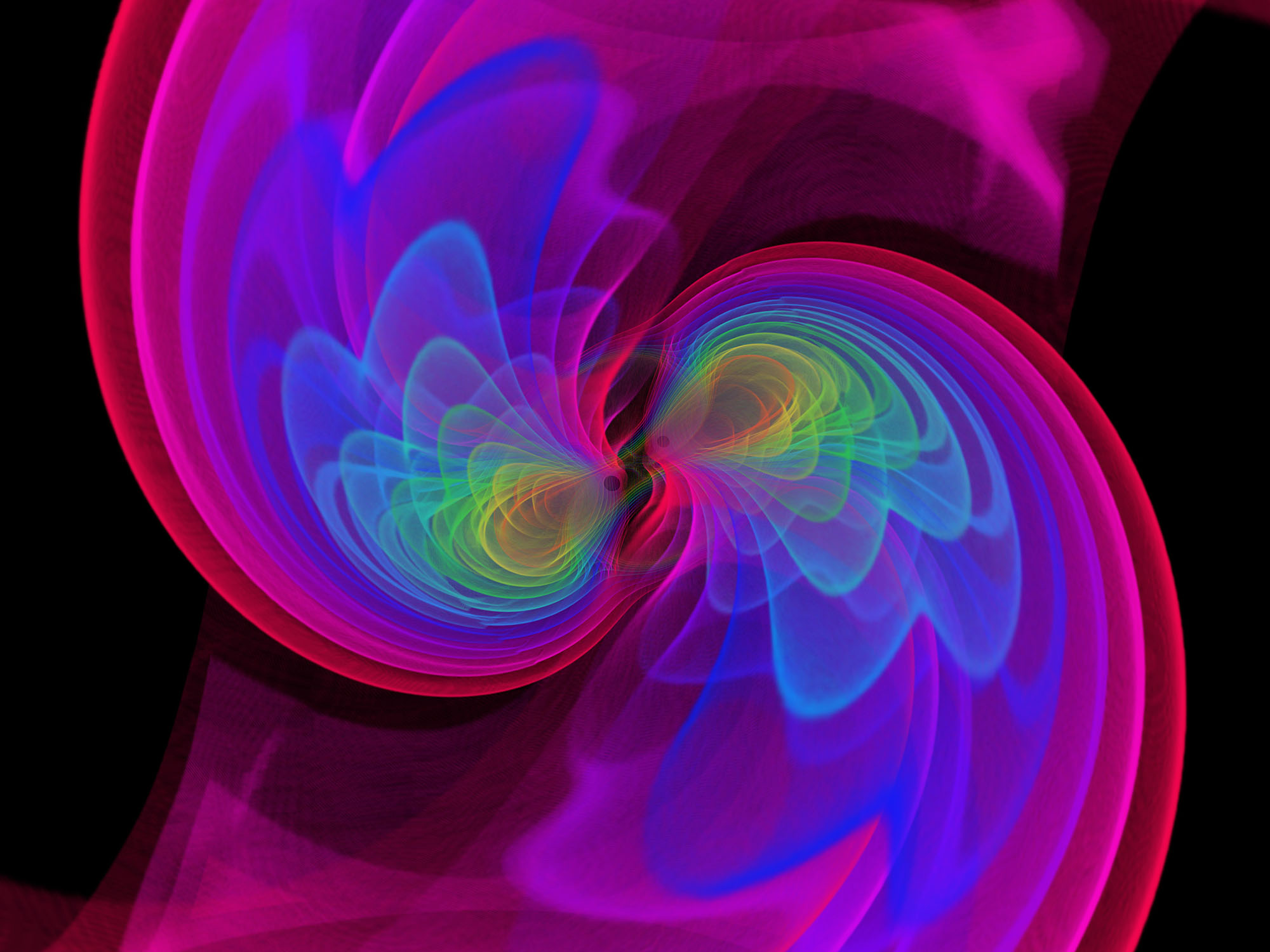 (Two collapsing black holes and the resulting gravitational waves. Image © Max Planck Institute of Gravitational Physics) The consequence of this is that the interaction of mass in the universe shapes the universe itself.

To understand why this is so important for the watch, let’s go back to Vianney Halter’s first Deep Space watch, the Deep Space Tourbillon of 2013: Already with this watch, Halter intended to represent the four coupled dimensions of the universe: length, width and depth – and time.

Now, with the first prototype of the Deep Space Tourbillon Resonance running, he also managed to depict the effect of gravitational waves in shaping their very own universe: through resonance, there is a mutual influence between the dominating forces – and this is different every instance the ‘universe’ is activated (i.e. the watch wound): in terms of relative direction, in terms of resulting frequency. Each time the watch stops and is wound again, the balances ‘negotiate’ de novo…

This watch is alive! More – it’s a universe on your wrist and this without any astronomical indication!

In our article on the Janvier Classic (see here!) we concluded that ‘just appreciating a watch is not enough (although the Janvier Classic gives ample reason to do so…) – a watch has an origin and a history. It is the maker with his or her own experiences, interests and personal history.’

„When I imagine and build demonstrators like this one, I learn a lot from it. Each mechanical challenge helps me understand our Universe more and more. Every time, I marvel like a child facing it’s complexity and subtlety. What I like the most is understanding, crafting, testing, and in the end sharing. Sharing is the ultimate goal of my work as a watchmaker.“

While the ‘classical’ Vianney Halter watches seem to represent his hobbies and interests. Now, we have a watch which actually translates recently proven fundamental forces of our universe into a mechanical automaton. With that, the watch transcends its essential definition as a timepiece. It is difficult for me to put my feelings on this in words, but this is a milestone: Every once in a while, we aficionados witness a moment of horological history, and Vianney Halter has just granted us another such moment with the Deep Space Tourbillon Resonance!

It is as if the Deep Space series of watches have finally found their true expression. Ornatus Mundi P.S.: All images, except noted otherwise, are courtesy of our friend and collaborator Guy Lucas de Peslouan.

Zenith: Hands-On with the new Zenith Chronomaster Revival A385