Greubel Forsey Hand Made 1 – Hand-Crafting at the Extreme

Hand Made - that’s one of the real complications in watchmaking of today, isn’t it?

Every once in a while a landmark object is born, an icon, a standout piece on so many levels. Only recently, we guess, it was one such day:

Watches from the Le Locle based manufacturer Greubel Forsey are already considered ultimately refined and superbly made time pieces – pinnacles if you want, up there with the very best from individual artists (or small workshops?!) such as Philippe Dufour or Kari Voutilainen. However, this does not mean the two founders Robert Greubel and Stephen Forsey are content with the already achieved. And indeed, they managed to top it with their latest release of the Greubel Forsey Hand Made 1.

the eclecticum travelled to La Chaux-de-Fonds a few weeks ahead of the release to meet with Stephen Forsey to get their hands on the first prototype: 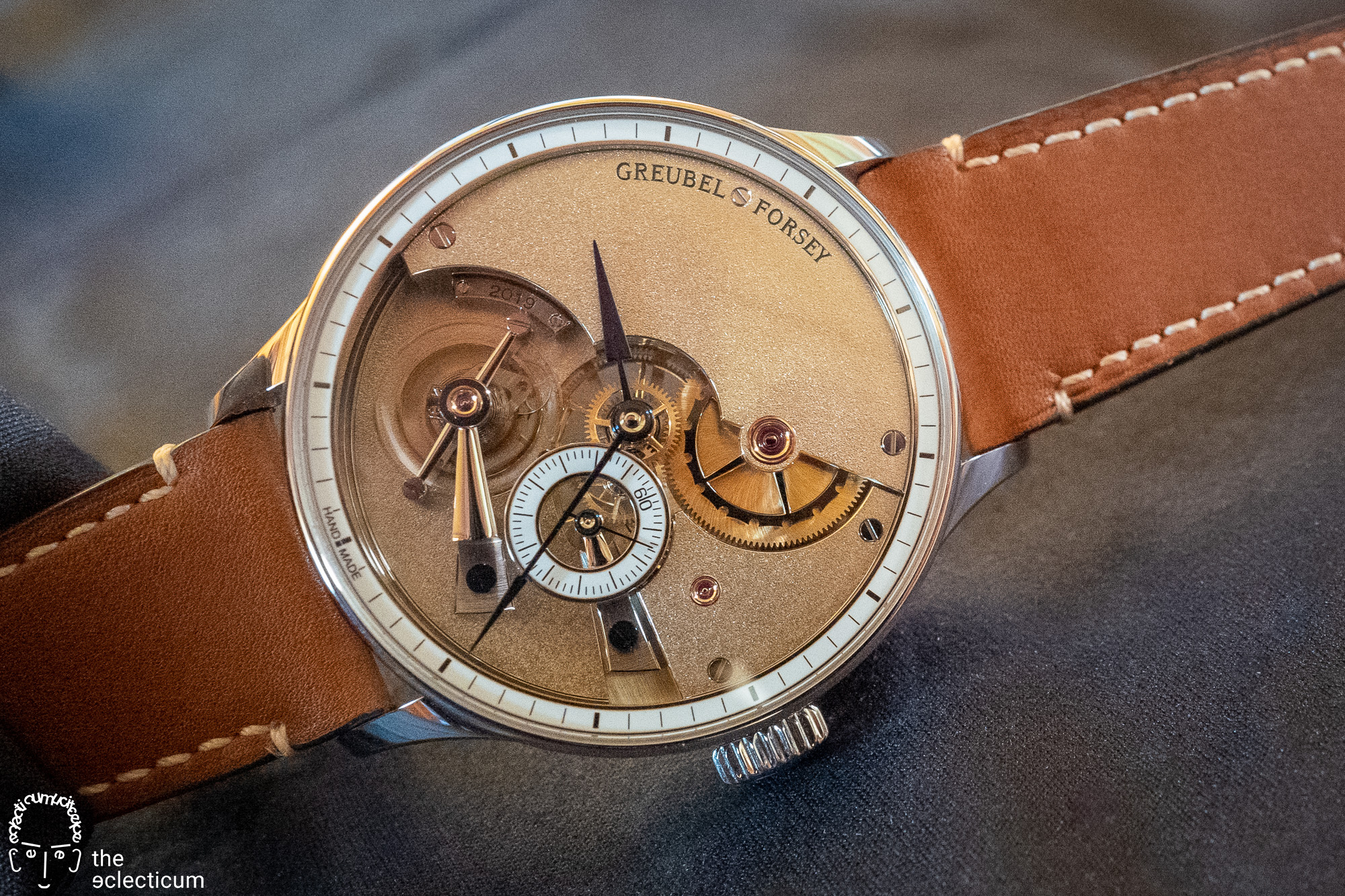 This watch, a time-only watch with a tourbillon, claims to be hand-made to 95% with the highest possible standards, requiring an extraordinary 6,000 hours work (equal to three years man-hours) per watch – given the skill and experience of the artisans necessary only two (in ‘good’ years, maybe three) timepieces can be completed per year.

Suffice to say, the finishing is outstanding: 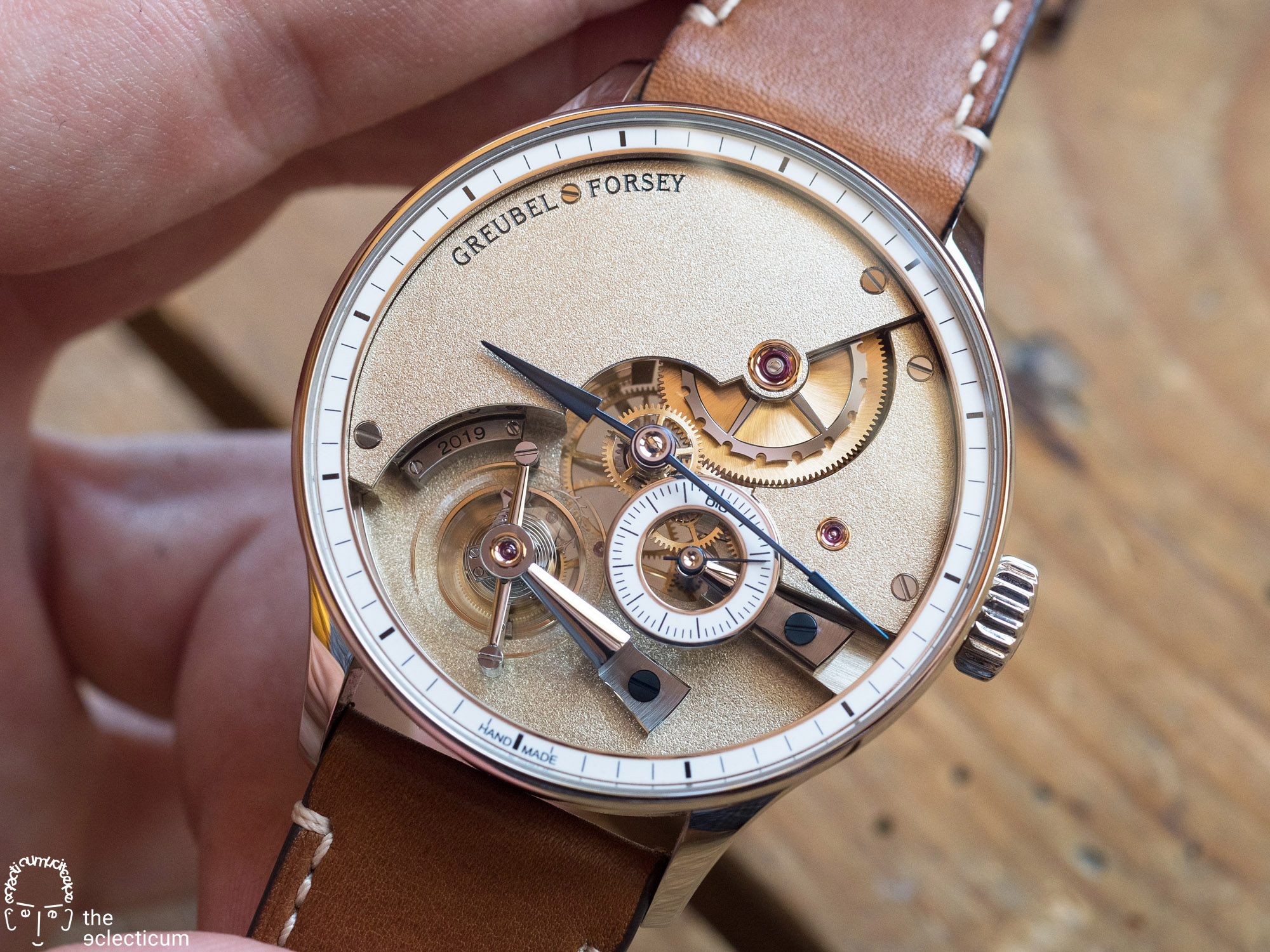 The foundations of the Hand Made 1 project are very personal ones for Robert Greubel and Stephen Forsey, both historical as well as quite practical: The two master watchmakers recalled the extensive experience of hand craftsmanship they accumulated during the years of their apprenticeships first and later in the restoration of important historical watches or the production of prototypes, and also remembered of the ultra-precise vintage mechanical machines they used – and they still had them stored in operational condition. Precision lathes and jig-borers are examples. 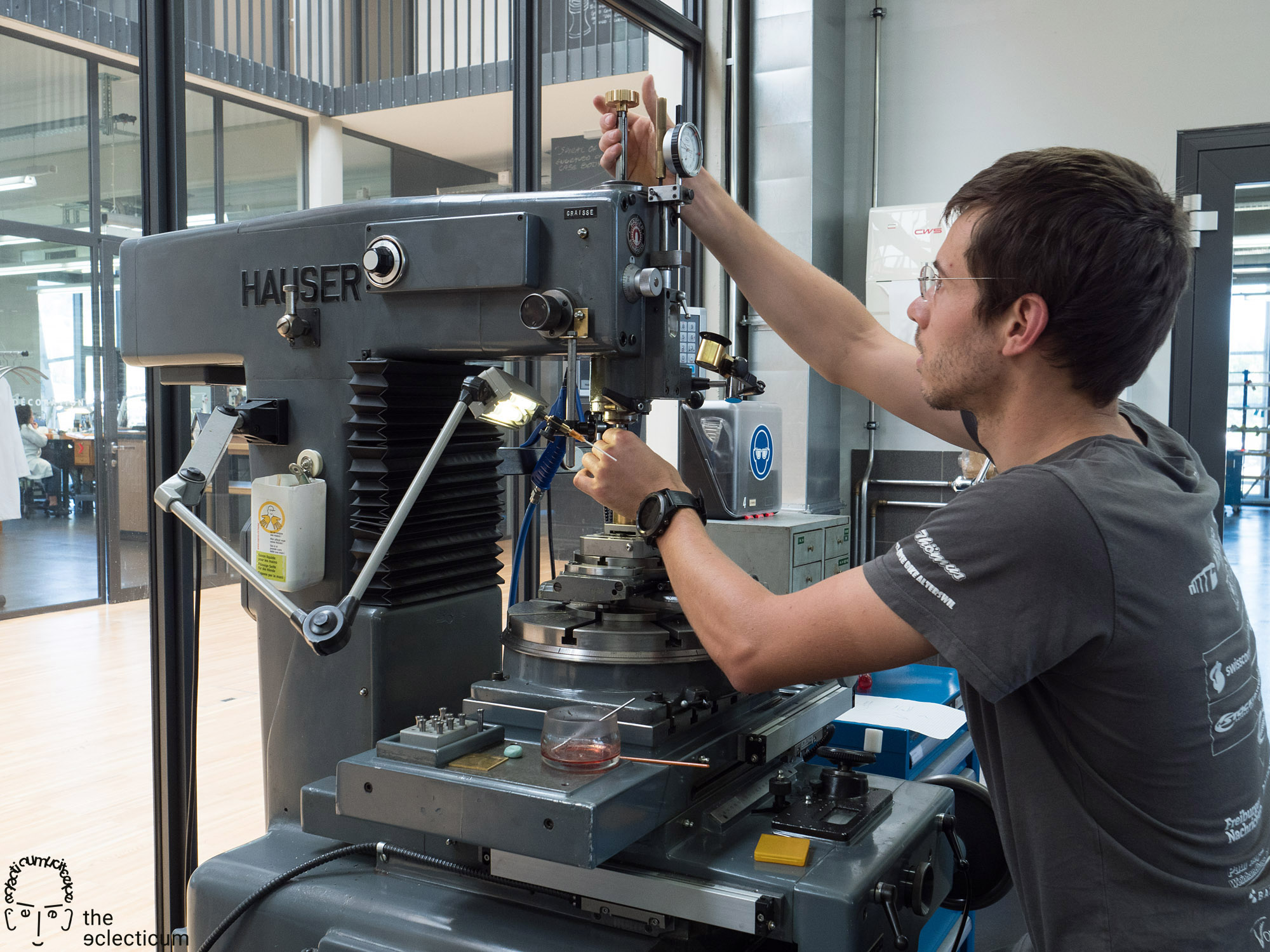 (A Hauser jig-borer from the early days of Robert Greubel and Stephen Forsey) The successful completion of the Naissance d’une Montre 1 adventure, executed under the auspices of the Time Æon Foundation and under supervision of Philippe Dufour, gave them the confidence to embark upon a project to create a contemporary timepiece which should be entirely crafted using the techniques, materials and methods of traditional exceptional watchmaking.

“The goal is to resurrect the ancestral art of hand craftsmanship and reinforce it with standards of workmanship and precision rivalling even modern production equipment.”

The object to achieve above goal is a hours/minutes/seconds timepiece with a tourbillon in a white gold case (43.5 mm in diameter and 13.5 mm thick) composed of 272 movement components and 36 case parts: 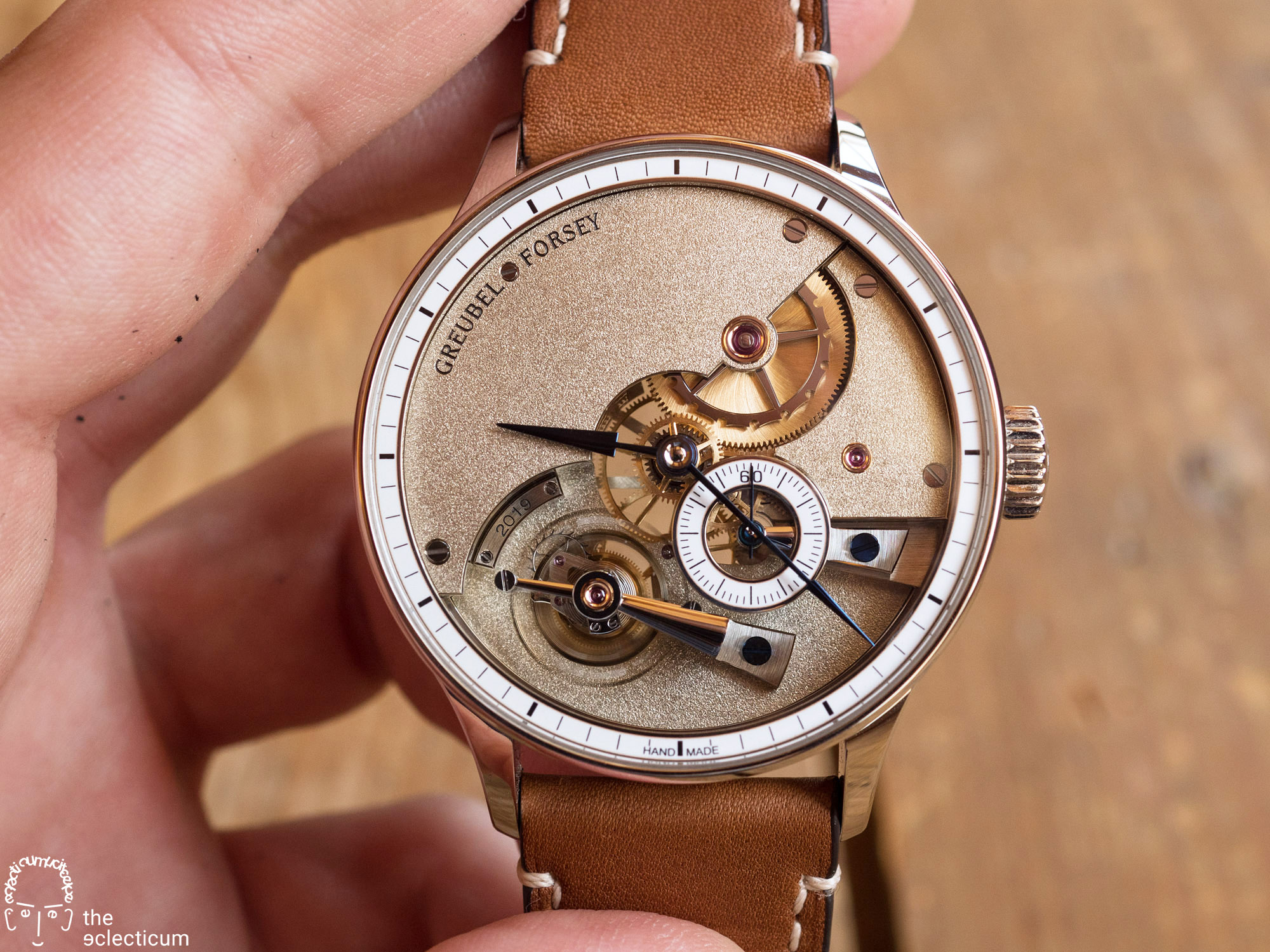 ‘Hand Made’ starts at construction…

What is little known about Greubel Forsey is that they consider the finishing of their watches already at construction. Having an aesthetic goal in mind, they devise the shape and surfaces of components, considering the potentials but also the limitations of state-of-the-art machinery. The programming of a CNC machine to produce a curved tourbillon bridge can take as much as 5 full days (but this is subject of an upcoming instalment of our ‘The Pinnacle of …’ series).

A similar approach has been chosen for the Hand Made 1 as well. Construction, traditional machining and hand-finishing designed such that the best possible result comes out of hand-made approach, also given its fundamentally different limitations:

“How can we design this part to be able to make it using traditional tools or machines such a jig borer or lathe? And which shape can we give it so the artisans’ intelligent hands can ensure extraordinary precision and the finest craftsmanship?” (Stephen Forsey) 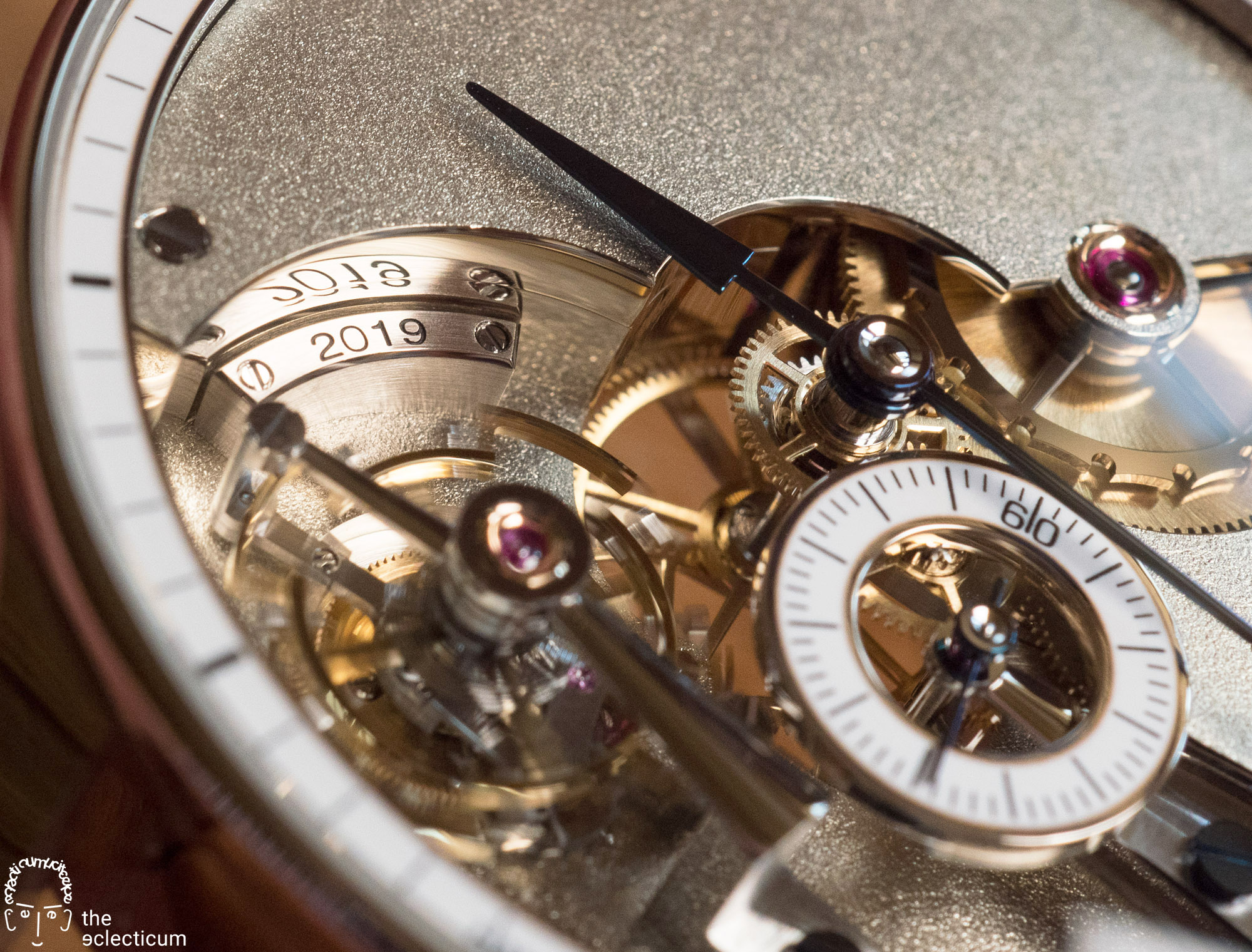 (superb finishing, note polished plate flanks) The solution to above question was to involve every trade needed for the completion of a watch, e.g. technical developers, machinists, screw makers, finishers, watchmakers, dial makers, case makers etc. formed a team of most skilled craftsmen and -women in their field (principally from Greubel Forsey’s own workshops, but also several external talents) that was involved in the project from its very start.

The notion of ‘from the very start’ is important: There are several operations which cannot be done by hand the same way as a multi-axis machine, there are different tolerances, the required movements of the hand had to be considered. Components needed be designed such as the old (but highly precise) lathes and jig-borers which Robert Greubel and Stephen Forsey still had from their very early days could be used to create them, resulting in some parts being simpler, but others also being a lot more complex than those produced with modern machinery. 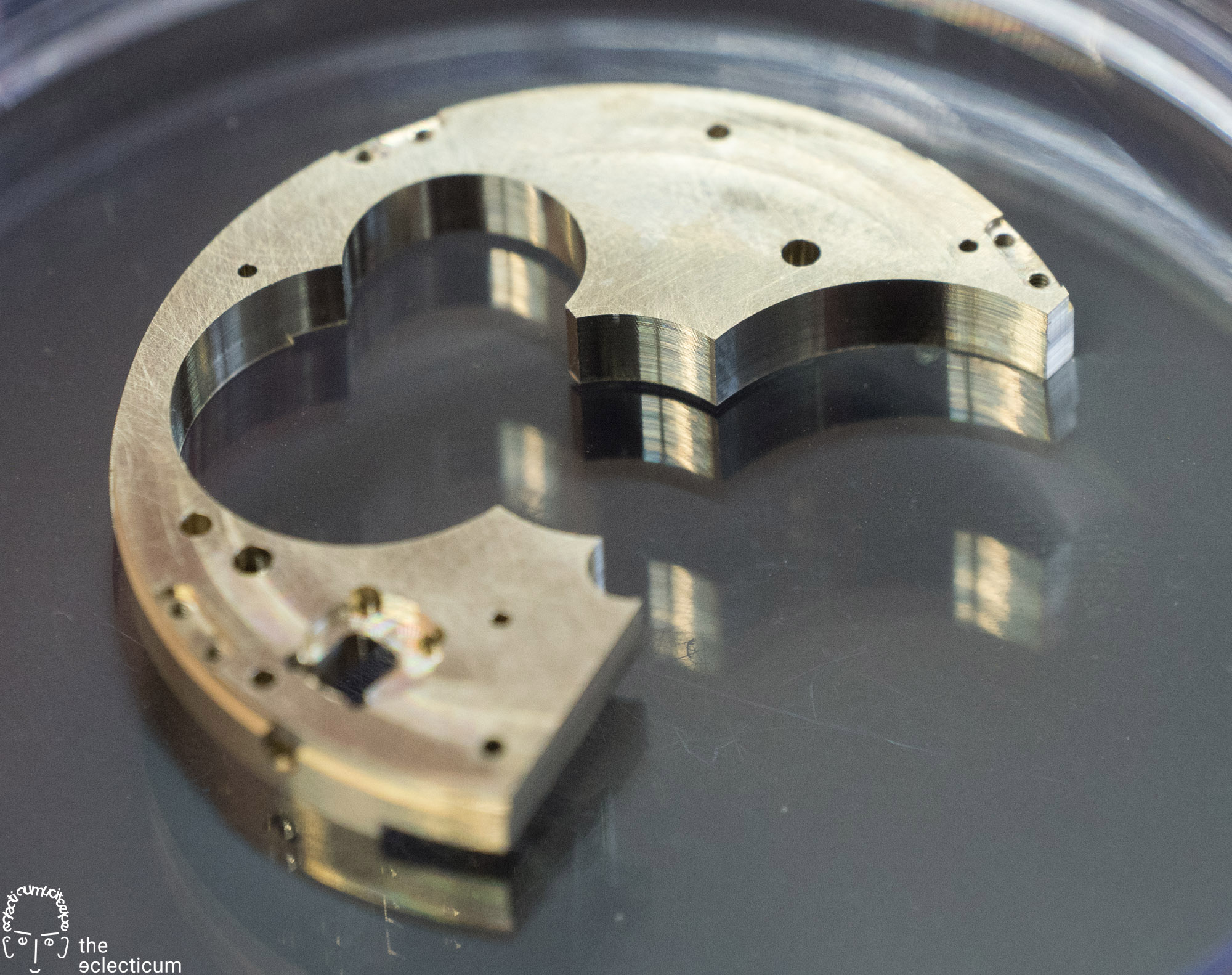 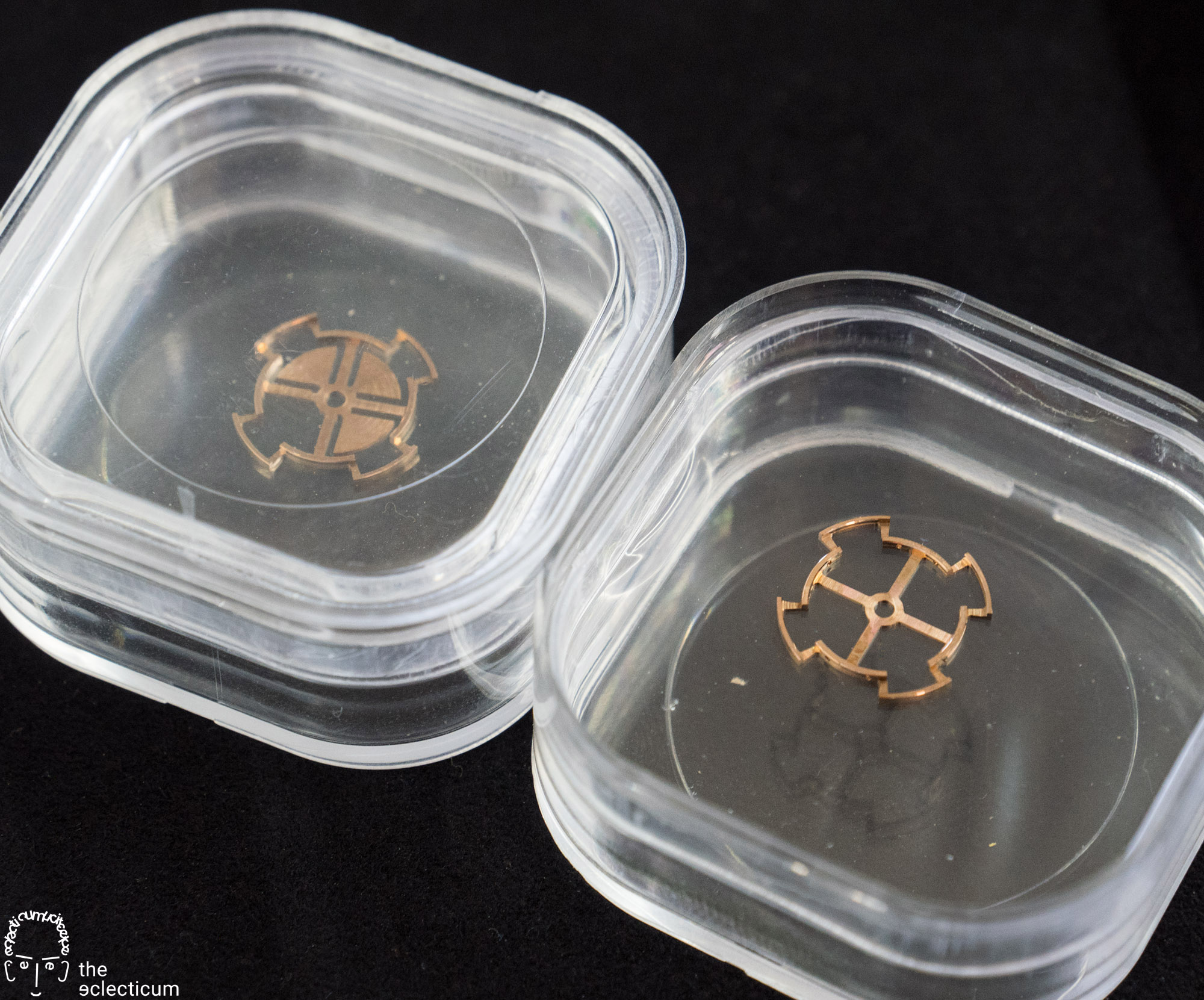 (Raw movement plate and balance wheels) The result was a 95% handmade watch, with only the following exceptions:

… and has mind-blowing implications:

That a fundamentally hand-made watch such as the (sic!) Hand Made 1 would not fit into the economic realities of a modern watch production is kind of obvious if you think about it. Yet, we were still surprised when Stephen Forsey recently told us the implications: it takes 6,000 (accumulated) hours of work for one single timepiece! 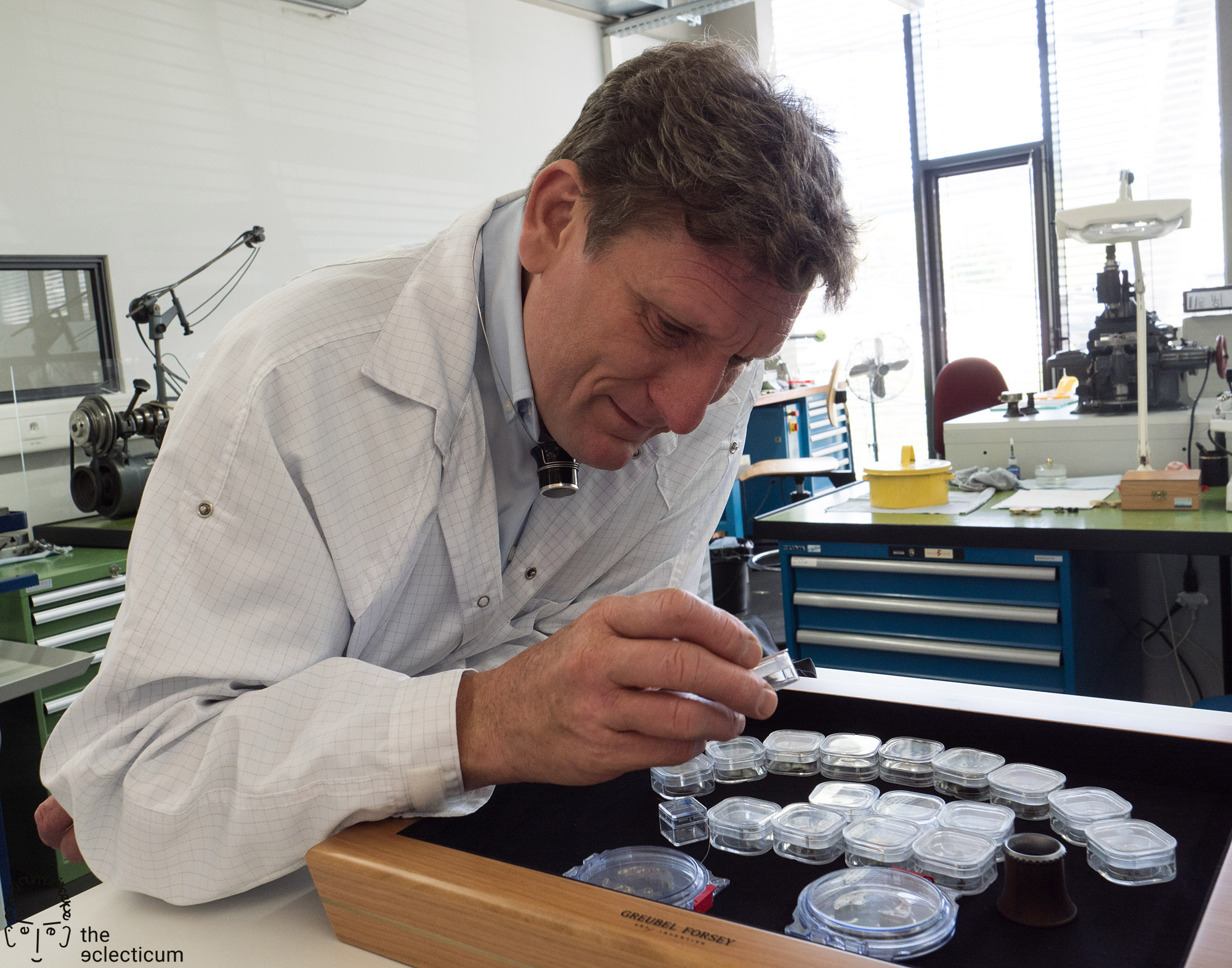 (Stephen Forsey presenting to us the movement parts made on traditional tools) How does this come about? Well, its part due the necessity from the ‘hand-made’ imperative, part due to the ambition towards the final product. Here are a few examples:

Many of the techniques used in creating the Hand Made 1 are such that we now consider as ‘endangered know-how’. It was the Naissance d’une Montre 1 project which took stock and catalogued the ancient techniques and conserved and perpetuated the savoir-faire for the future. Below a few detail shots to illustrate the masterful work: 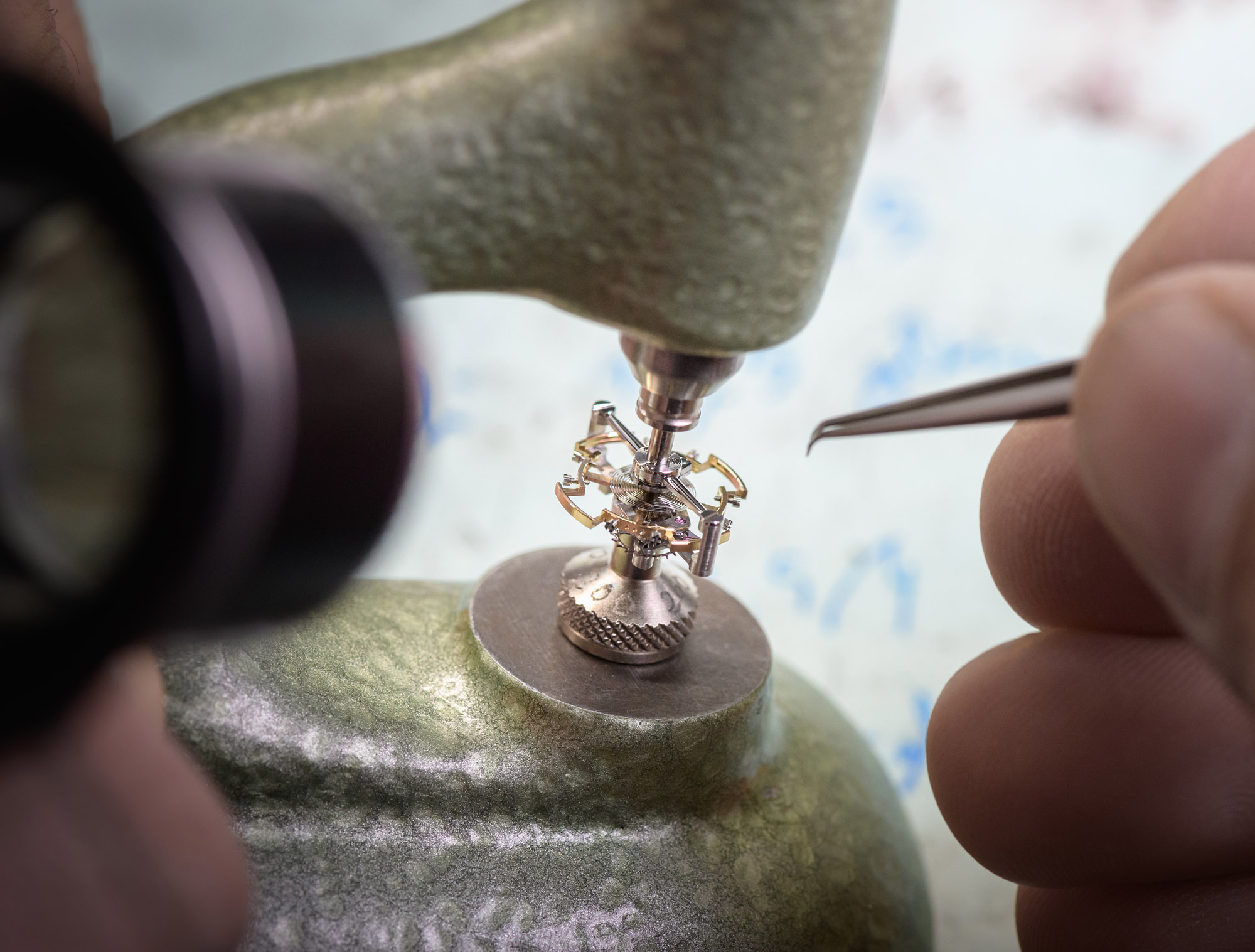 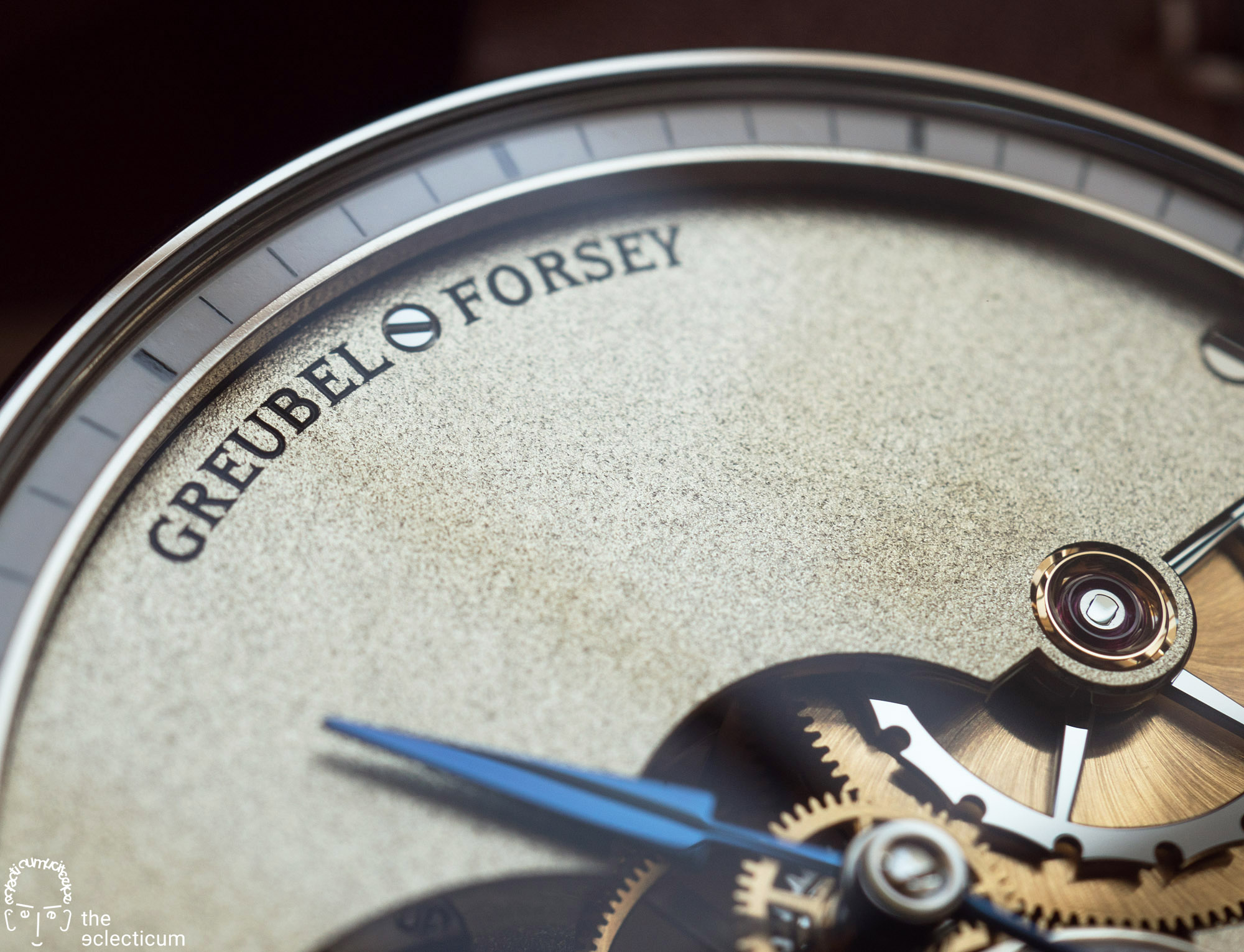 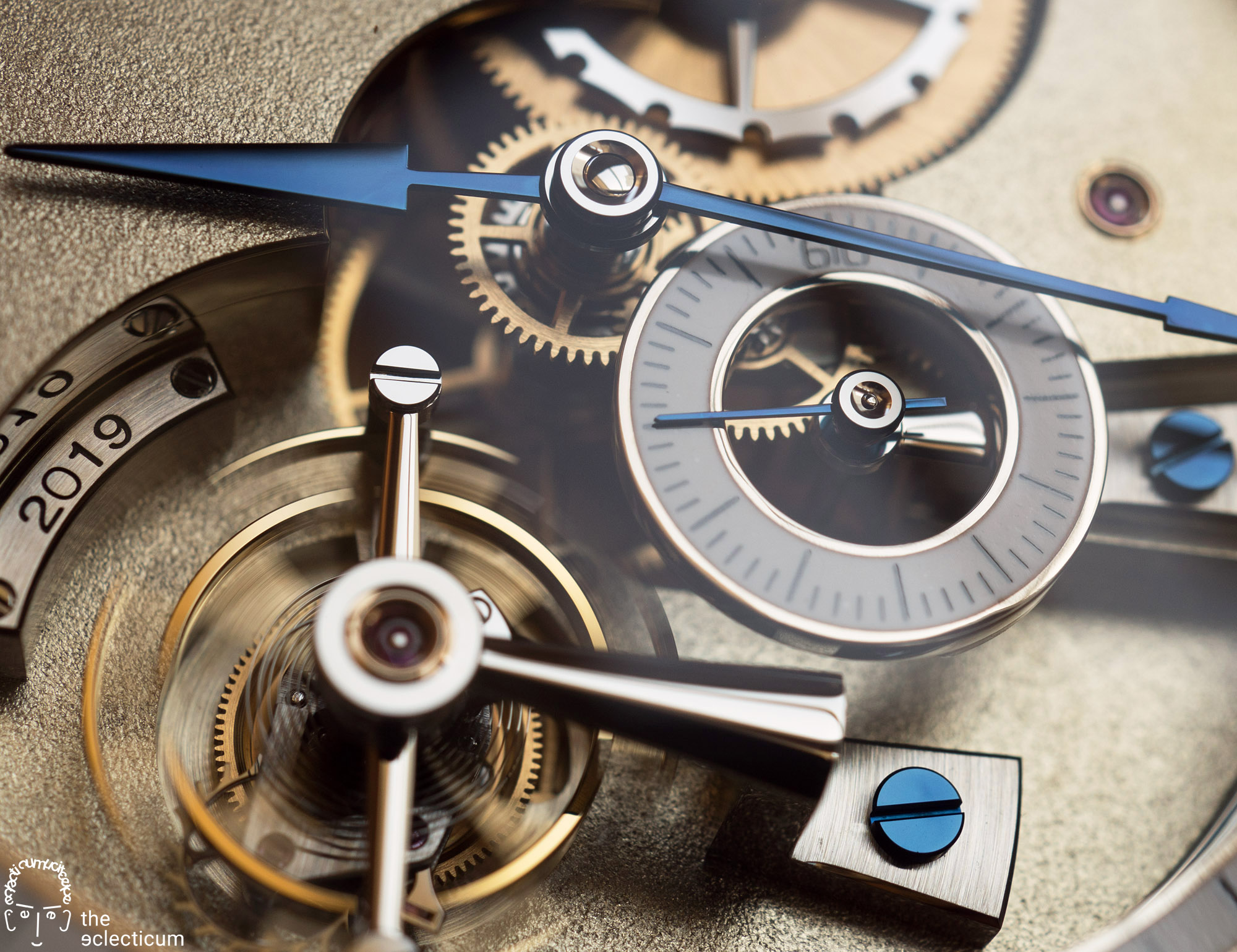 (simple, but superbly made hands) 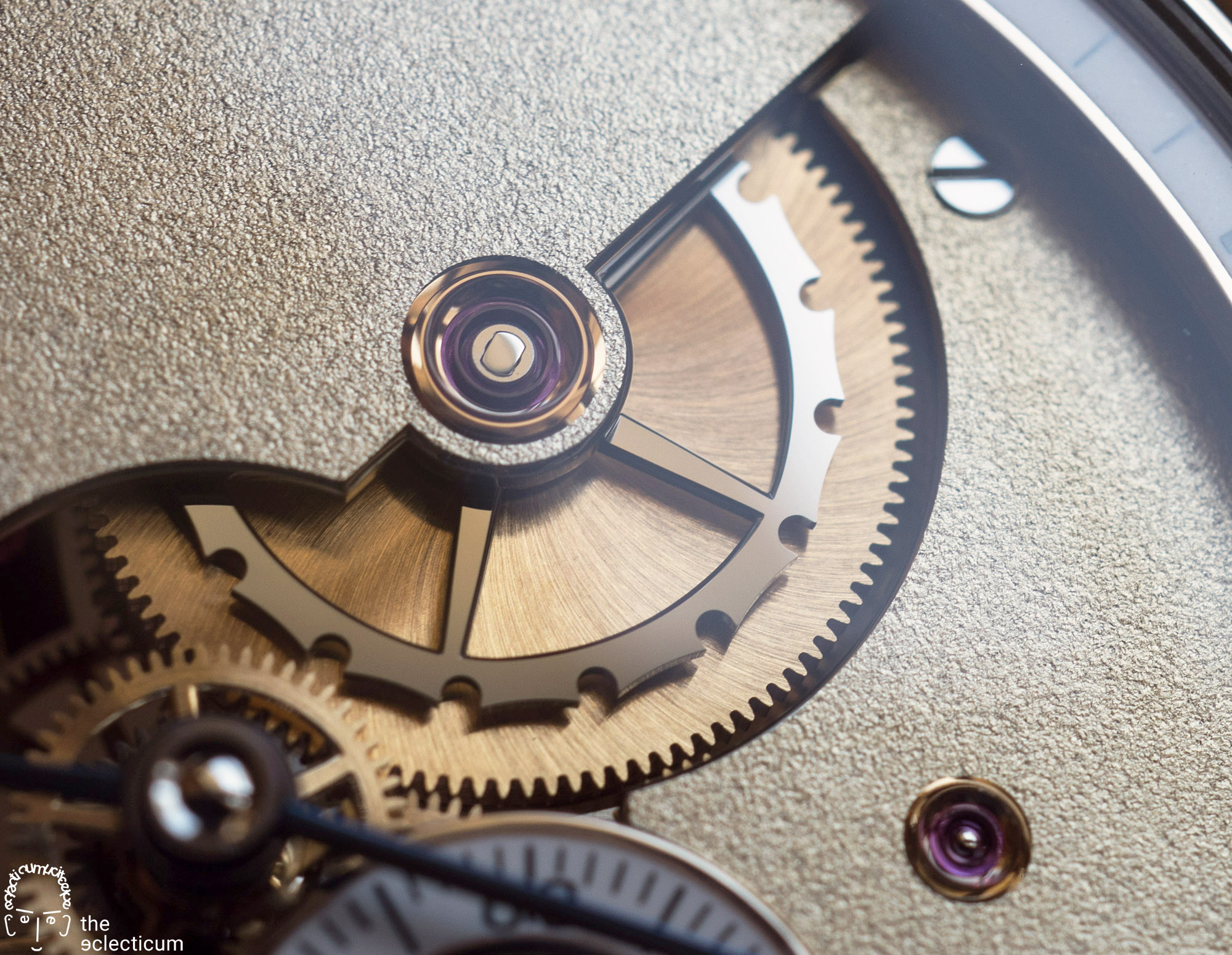 (have you ever seen such quality in polishing?) 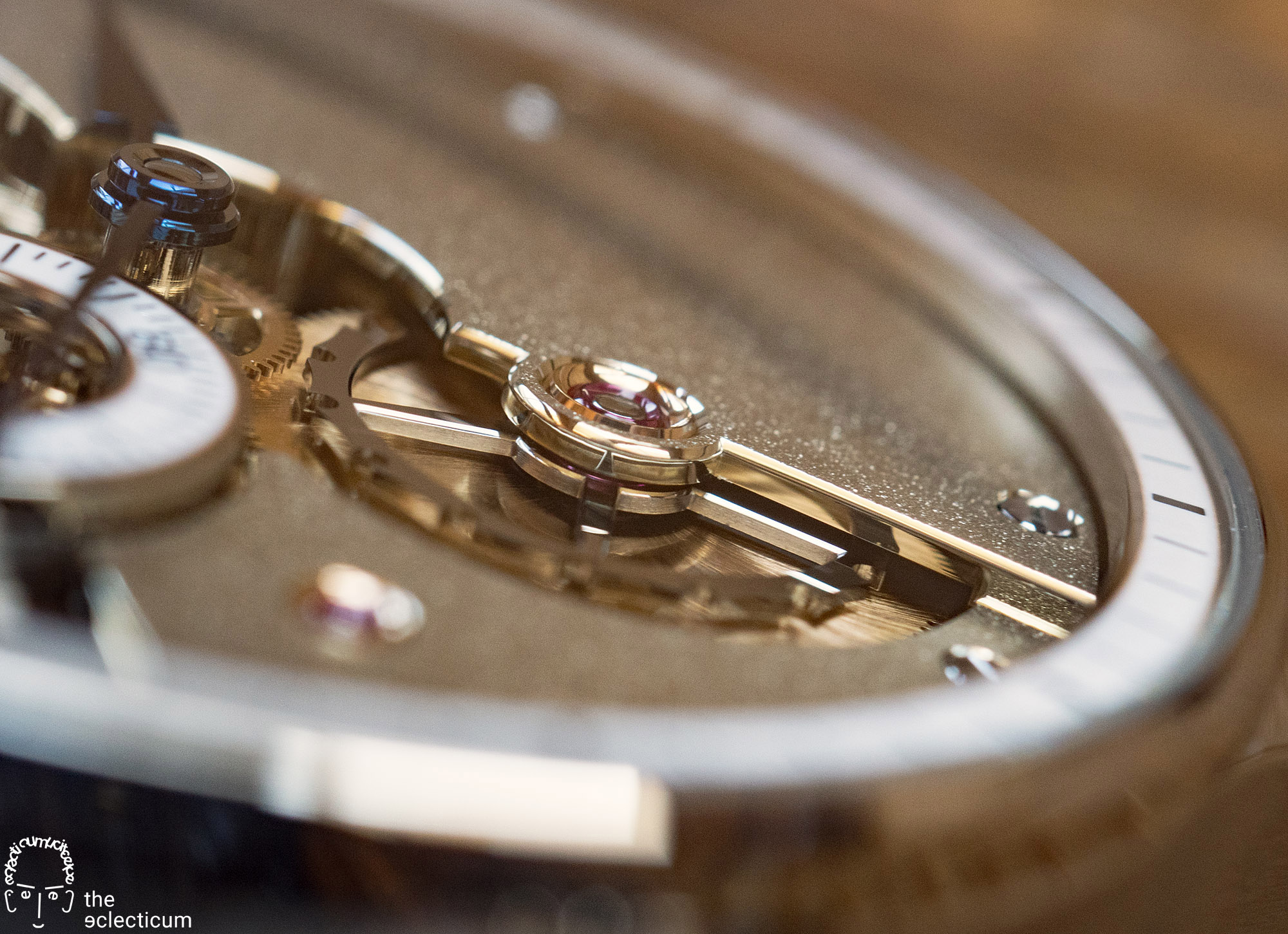 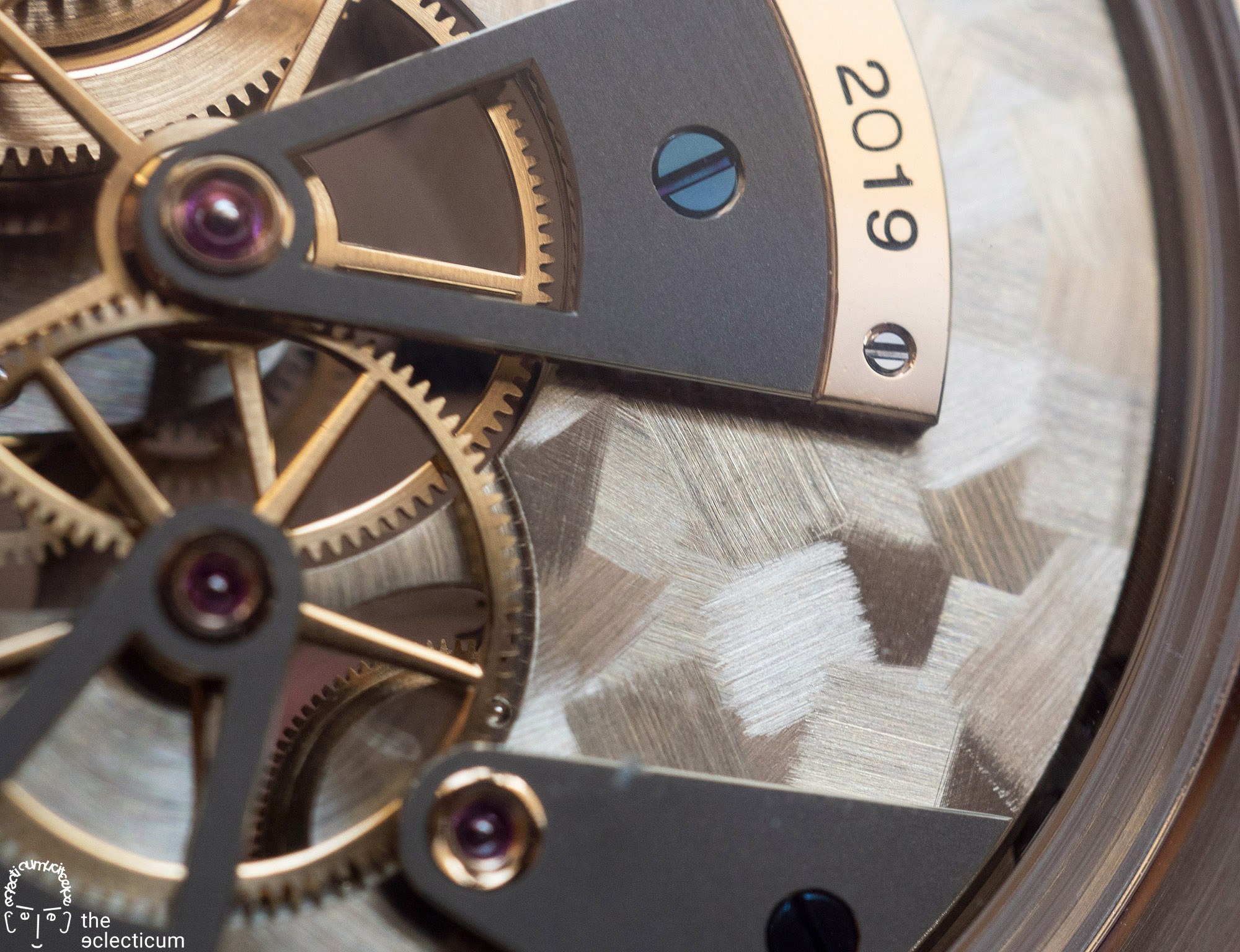 (detail of the ‘impressionist’ plate decoration) 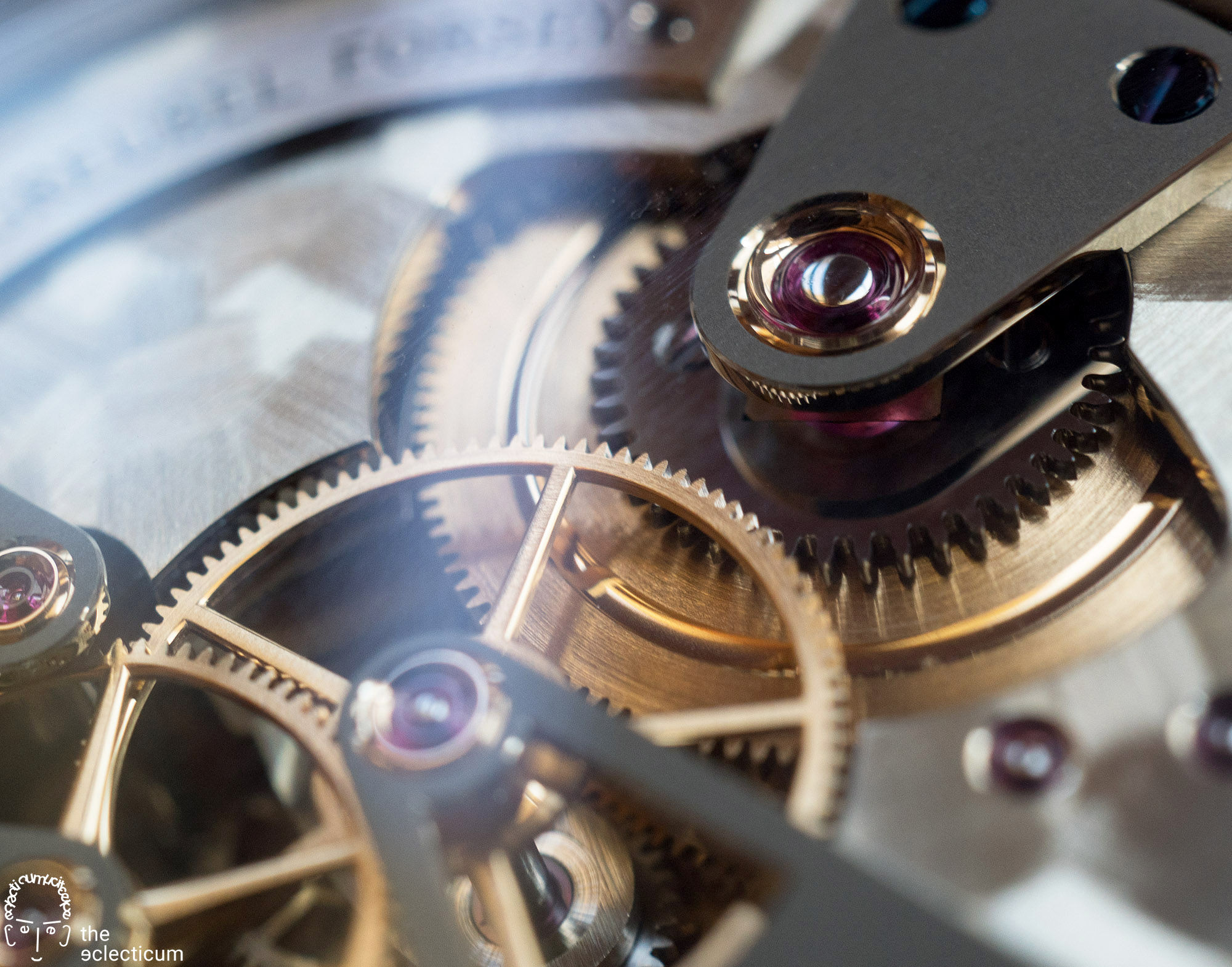 (what an abundance of delicately composed surface elements!)

A result to savour – and not necessarily obvious!

The Greubel Forsey Hand Made 1 is a watch conveniently sitting at the apex of watchmaking – yes, we would be very self-assured to voice such a blank statement. It is the approach chosen, the means employed, and the practical implementation of and perpetuation lessons learned from the Naissance d’une Montre 1 project, which essentially brings it to real life.

We don’t want to hide the fact that when one appreciates the images, or better even holds the watch in the hands, one is tempted to compare it to way less expensive revered watches from the likes of Dufour, Voutilainen or Rexhepi, and one starts to wonder…

… yet here is the point where (specific) knowledge jumps in. All of the above follow the ‘Genevan’ style of finishing, with broad, sparkling and lustrous anglage at the edges and feathery striping of the surface areas. It is very much a ‘rounded’ approach, and thus at its core is fundamentally different to the more exacting ‘Neuchâtelois’ approach to decoration followed by Greubel and Forsey (for those who are not that familiar with Swiss geography, La Chaux-de-Fonds is located in the Swiss canton of Neuchâtel).

So what you won’t see in a Greubel Forsey watch are those deeply loved (and easily appreciable) substantive and brightly polished edges on the movement bridges. This is not ‘Neuchâtelois’ … Instead, what is so typical for their watches is the utilisation of finest finishing to emphasise the definition of a work piece: 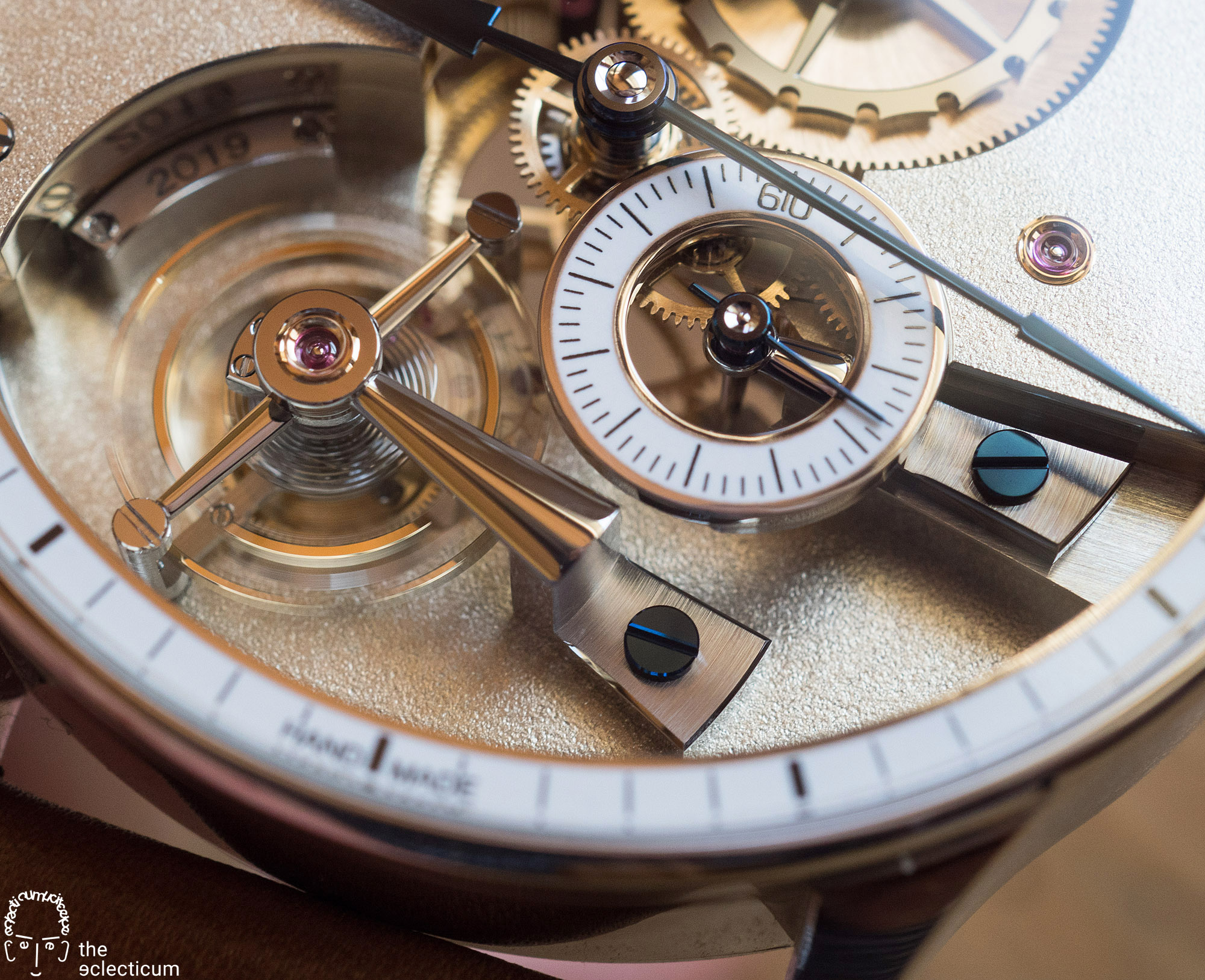 (Tourbillon bridge; note how precisely the finishing is used to emphasise the sharp definition of the tourbillon bridge) If you look at the tourbillon top bridge you get a nice illustration of what we refer to here: super-exacting finishing really carved out and expose the tack-sharp juxtaposition of rounded, flat and straight elements. Greubel Forsey is already a master at this, but the Hand Made 1 brings this all to a new (even superior) level.

The way a polished part shines is marvellous, excellent on a level we have not seen before. Note the hands, simple in shape, yet to supremely executed down to the microscopic detail.

This incarnation is all devoted to precision afforded by the mastery of traditional watchmaking tools and techniques to the highest level of skill, and employed such that it can match or even exceed what can be done with machines. 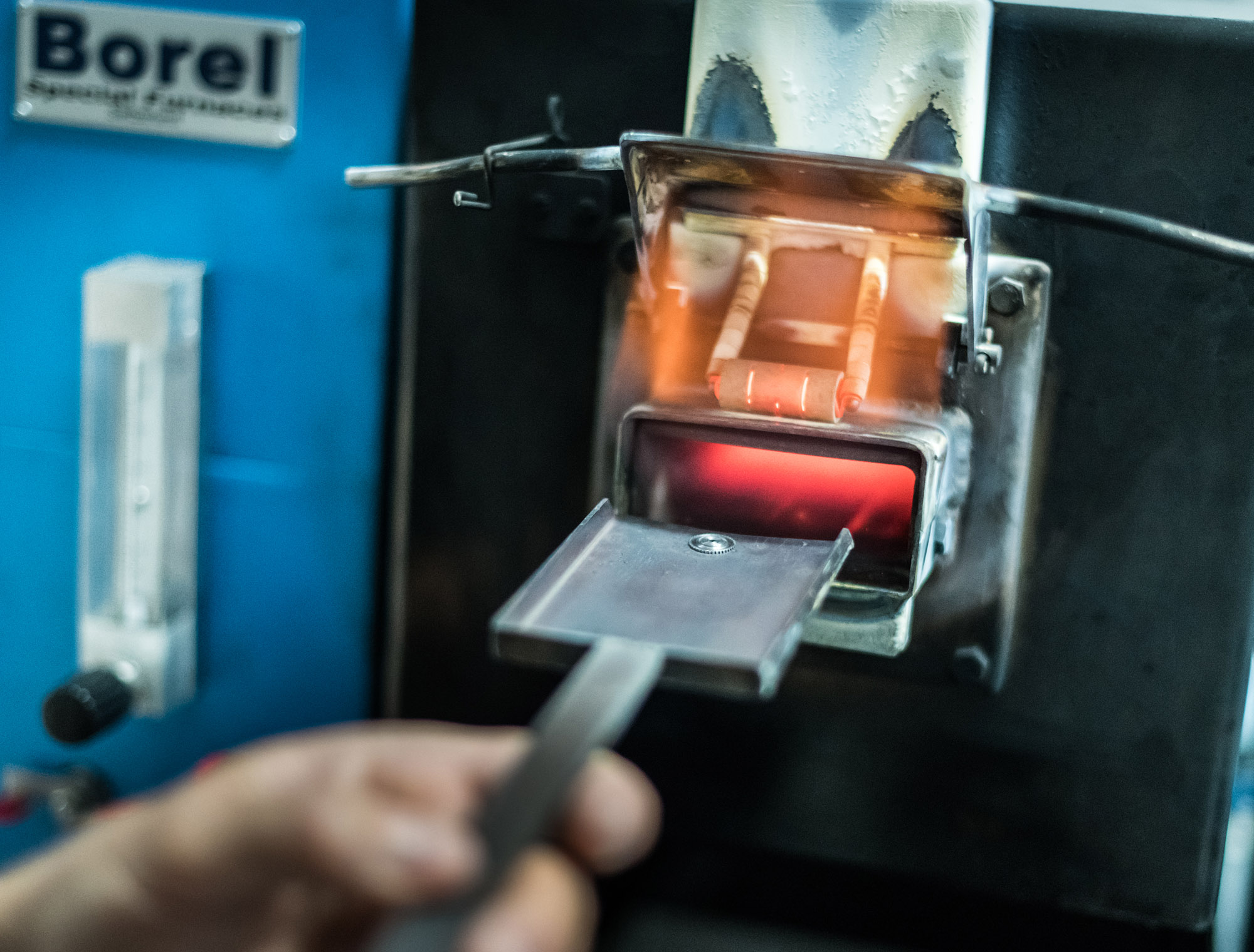 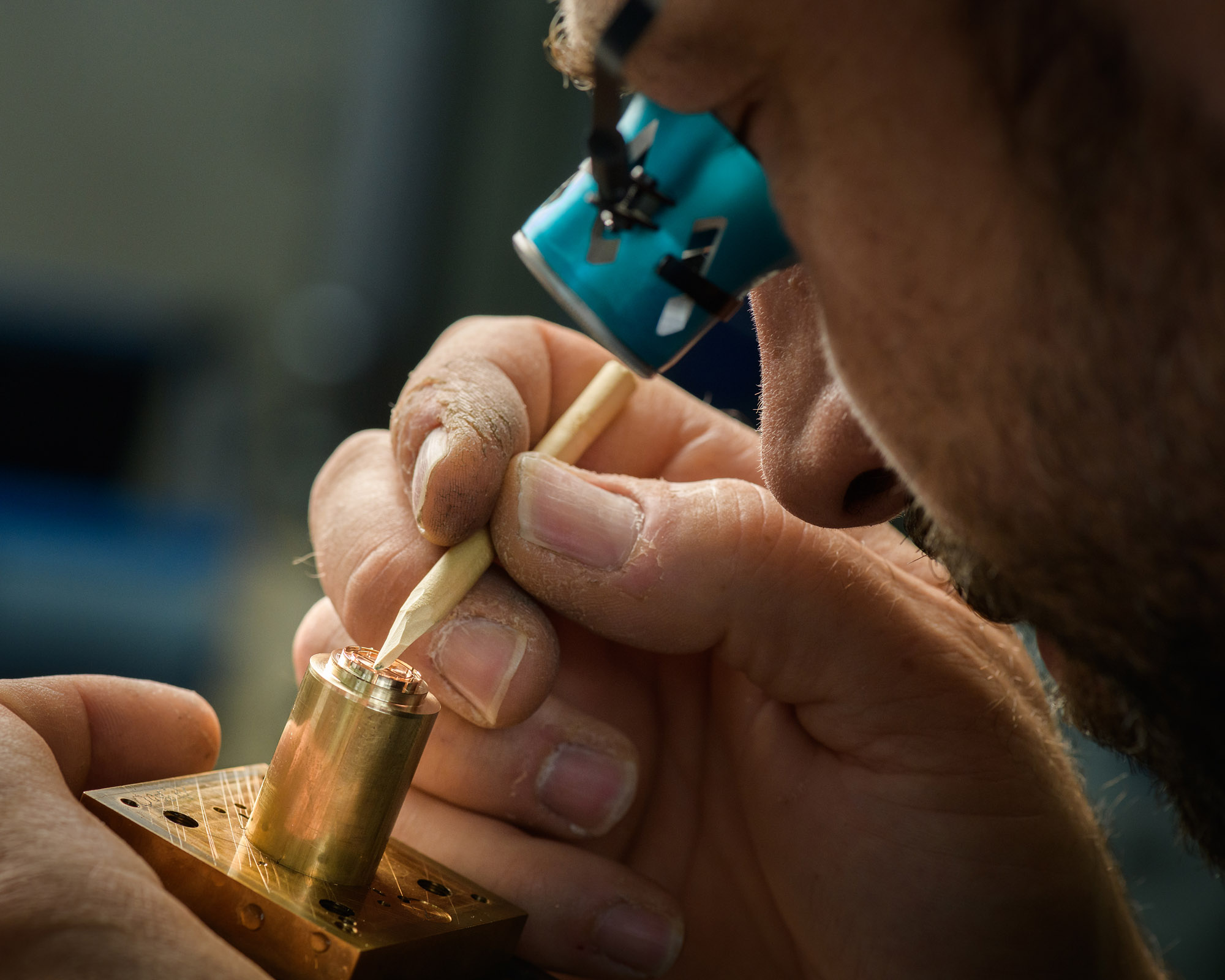 (Hardening of wheels (top); finishing of wheel spokes (bottom). Images (c) Greubel Forsey) Of course, this cannot come cheap, and particularly so if such a watch comes from the house of Greubel Forsey. This is north of CHF 700K (significantly so…). Start breathing again, please!

The Hand Made 1 is a look back to the past (in terms of traditional watchmaking by hand, but also in there very personal terms of the two founder’s watchmaking upbringing and their tools), and at the same time it offers a pathway to the future, putting the vast amount of know-how compiled through the Naissance d’une Montre 1 project to a practical application.

Appreciating the Hand Made 1 this way, the watch tells us a bit: First, it is a story of diminishing returns to investment, a first-year classical theme for students of economics: if you are already at a very high level, moving further up requires increasingly higher efforts per unit of advancement. If we compare the watch to the best possible fit within the Greubel Forsey range, the Tourbillon 24 Secondes, which is about two times more ‘affordable’, the message is clear. The flip side of the equation is the insight of how much modern techniques have ‘democratised’ finest watchmaking. Yes, we think this statement even applies to watches of the ranks of Greubel Forsey and comparably accomplished watches. 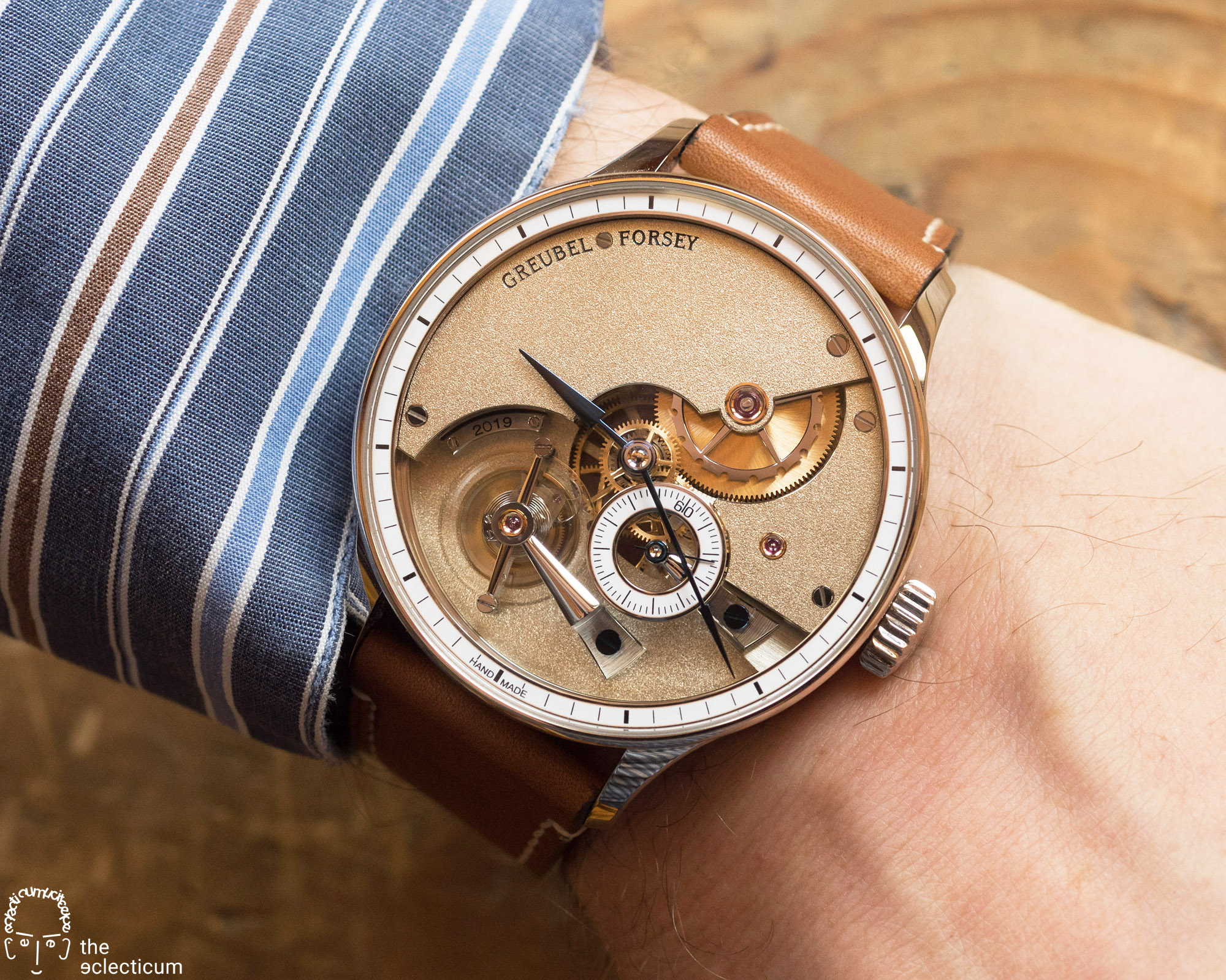 That is a rather rational observation, and it certainly begs the question whether this is a proper approach to such an outstanding watch. What we see is a deeply personal expression of a human-centric watchmaking ethos of both Robert Greubel and Stephen Forsey. This is important to note as the ‘perfection’ expressed by the remainder of their collection often comes about as ‘cold’ compared to the spectacle of other finestly made watches (finestly – we had to invent this superlative…).

But we need not forget about the regional context of each watch (if considered conceptually at all), the watchmaking terroir if you like, and this is by definition more down to earth in La Chaux-de-Fonds. Make no mistake, this does not mean ‘cheap’…

With the Greubel Forsey Hand Made 1, both Robert and Stephen and the entire team of craftspeople involved have put a less discussed watchmaking savoir-faire firmly on the table. They created a new star on the horological firmament, one which we hope many aspiring watchmakers might use as their inspiration and guiding light!

The pinnacle of (fine) watchmaking – of old masters, elves, virgins …...
Scroll to top