Gold Dust: Paul Gerber Cal. 41 – the seconds in your hand

Paul Gerber is perhaps the most subtly ironic watchmaker – always ready with a charming watchmaking twist – such as this ‘bi-nique’ Cal. 41 wristwatch with switchable jumping/permanent seconds and triple rotors Today I’d like to feature a very special watch made by an exceptional watchmaker, the Cal. 41 Switchable Jumping/Permanent Seconds with Triple Rotor by Paul Gerber. It is believed that only two of these watches were ever made. 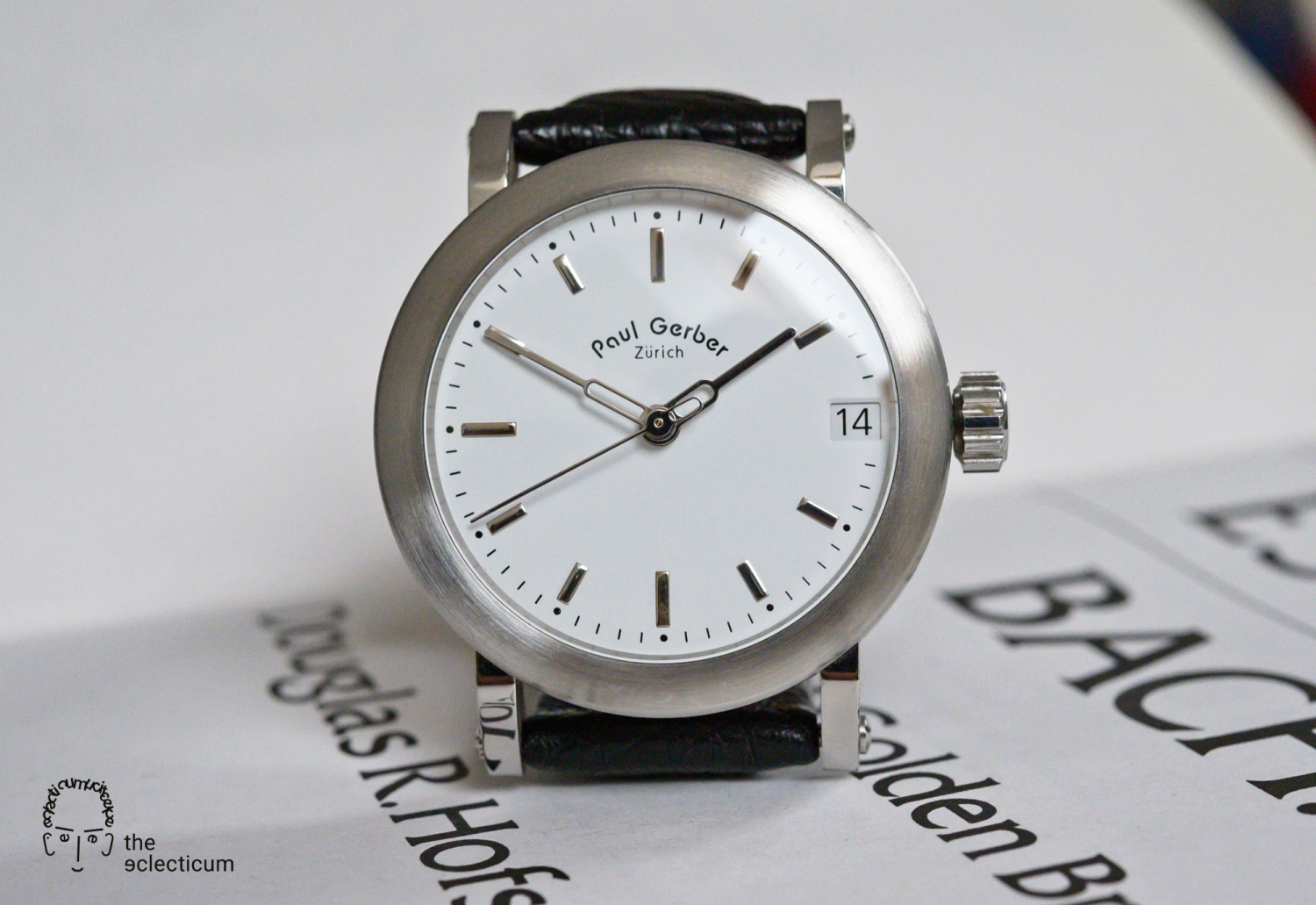 A watchmaker of legendary repute

He is a man of ample experience, a man who needs no real introduction here, one of the legends in watchmaking: Paul Gerber from Zurich. 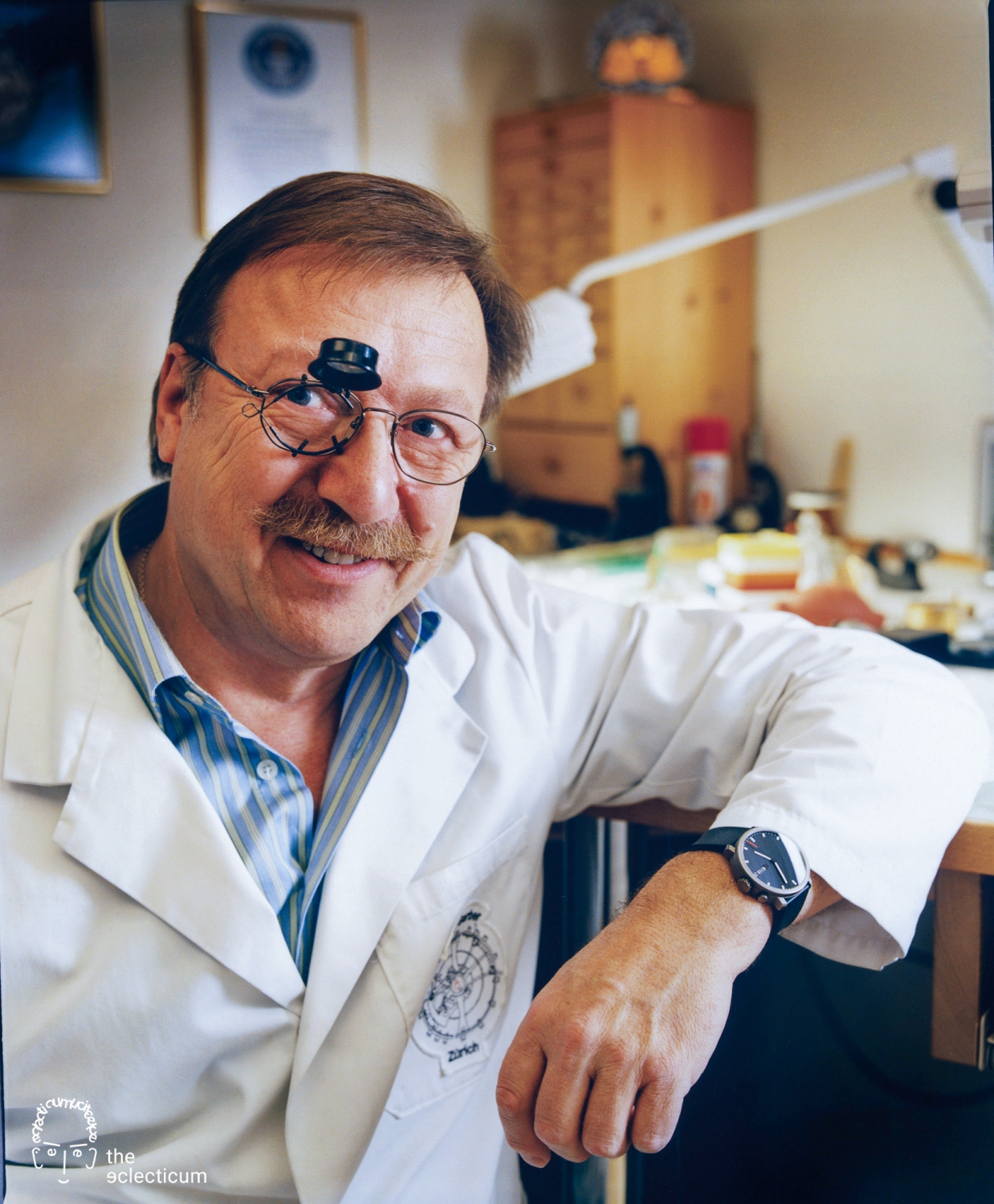 In 1989, Paul started originally with a miniature wooden clock (‘since wood is easier for me to work on, back in the days’) which jump-started his unchallenged reputation as the ‘master of the non-existent space’: 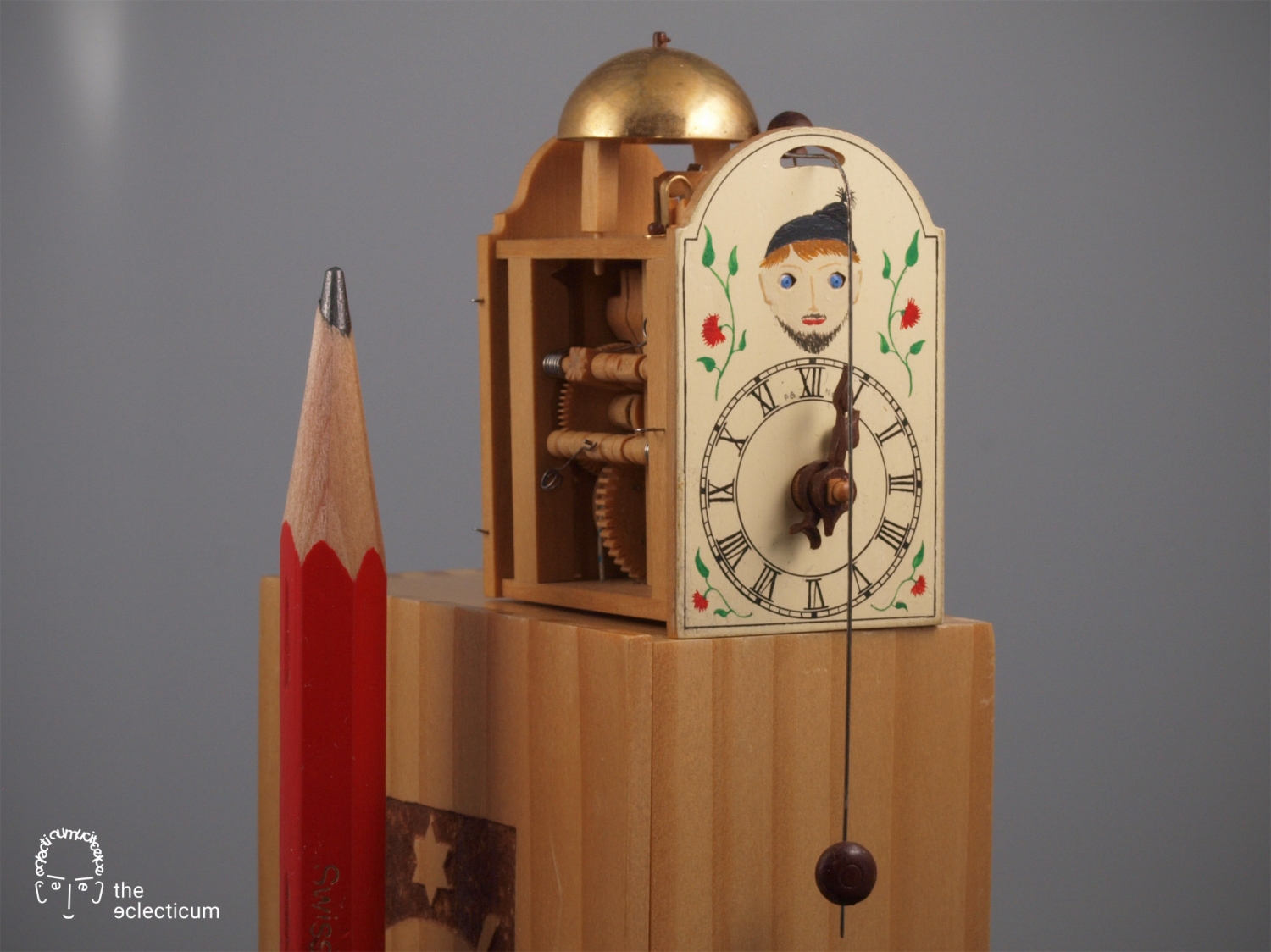 (Paul Gerber’s first clock ever from 1989; the ‘Kuhschwanz-Augenwender’, English ‘cow-tail eye-mover’, named after the pendulum shape and the fact that the boy moves his eyeballs. The pencil serves comparing sizes)

This reputation enjoyed another boost with the completion of the Superbia Humanitatis, an ultra-complicated watch that according to the ‘Guinness Book of World Records’ is the most complicated wristwatch in the world. This, at least, is true as far as unique pieces are concerned. 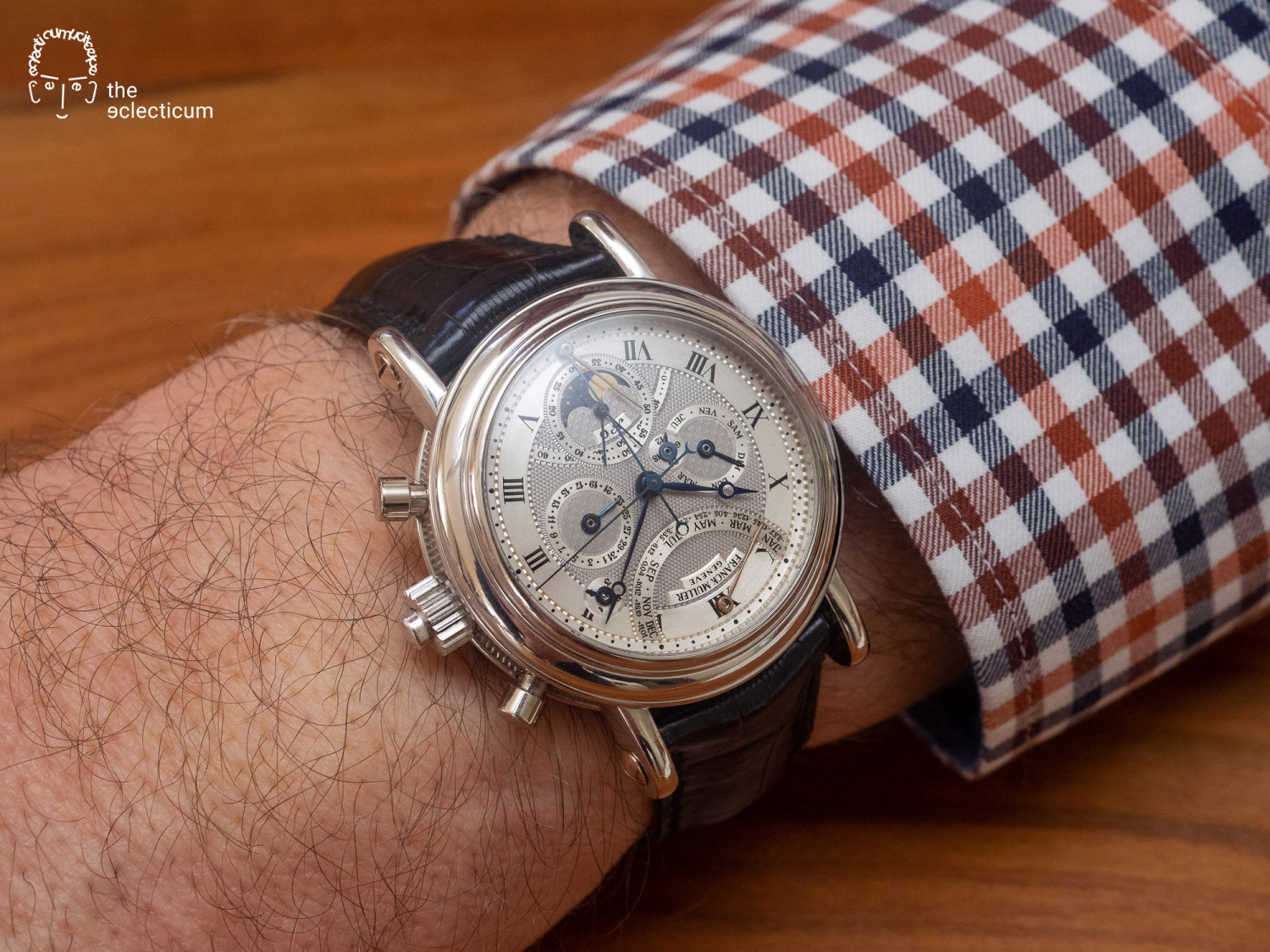 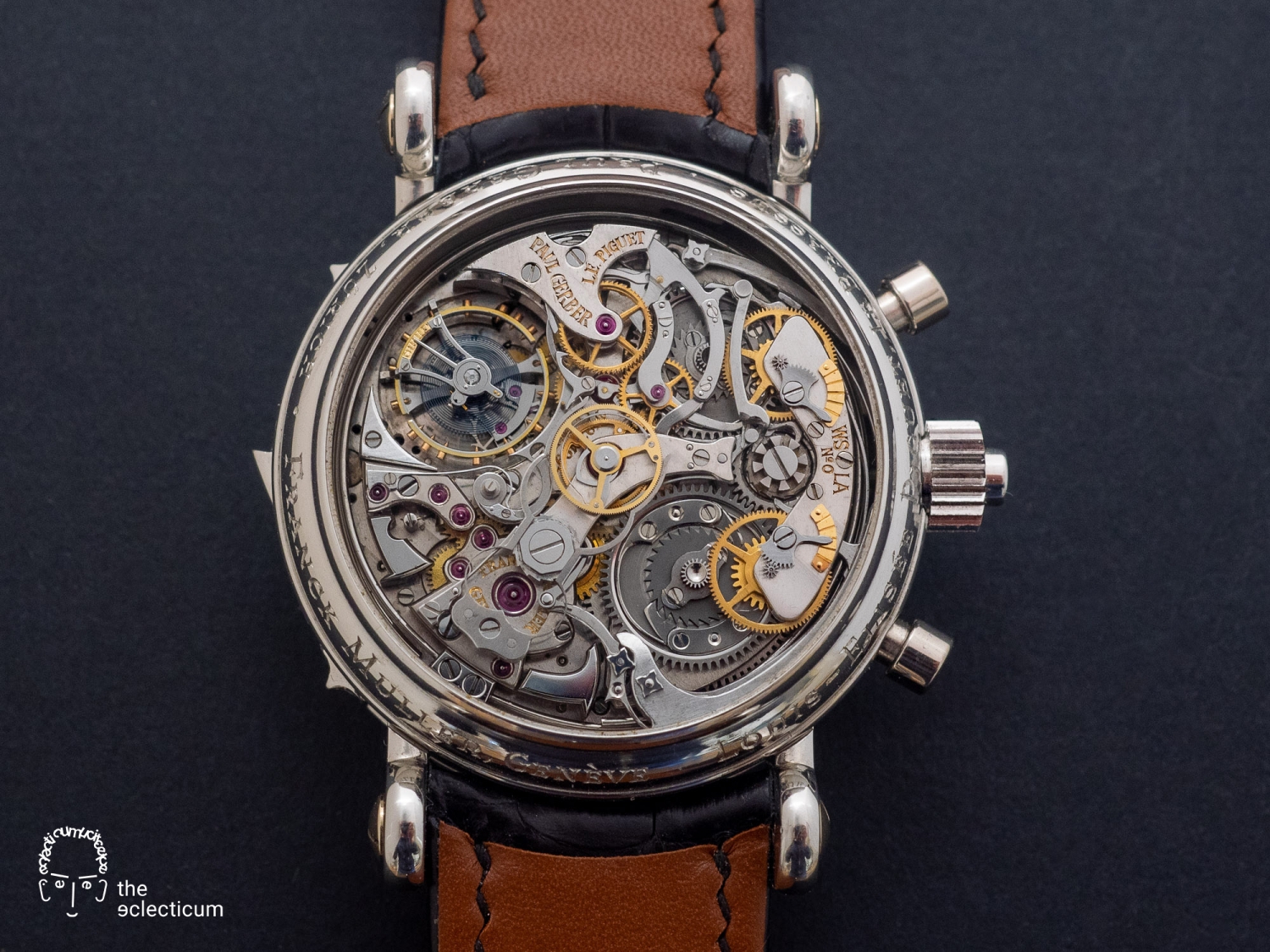 (The Superbia Humanitatis on the wrist of its creator; its highly complex movement) Yet exotic or stratospherically elevated watches are not all he does: famous as well are his retrograde seconds indications, and here again Paul Gerber was the first one to implement. He used a stock ETA Peseux 7001 movement and transformed it first with a retrograde seconds indication and a bit later with an automatic winding system. 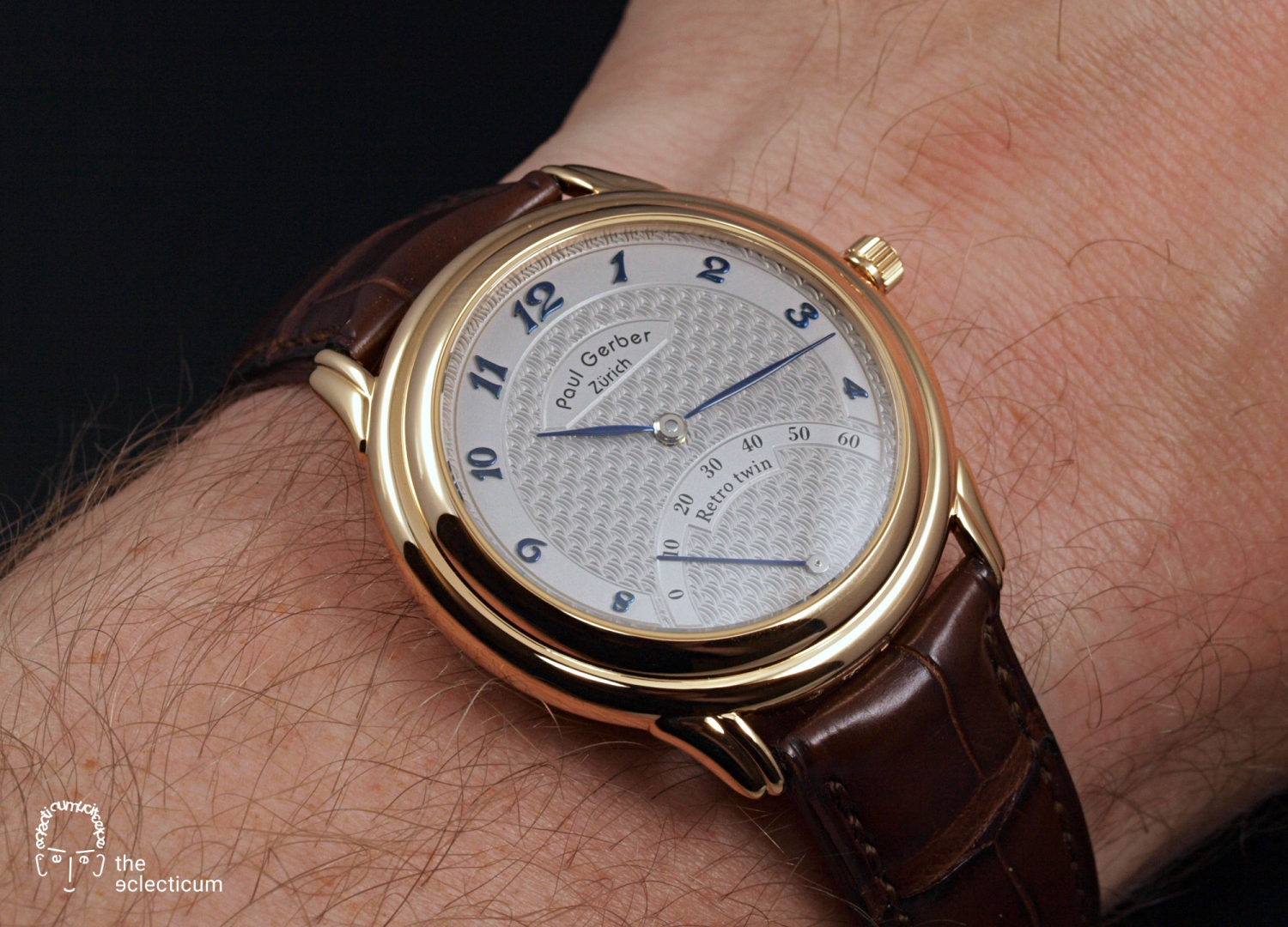 And what a system it was! Puzzling for many at first view, with its twin rotors that had overlapping radii, yet somehow never bumped into each other… these two rotors gave the watch its name: Retro twin: 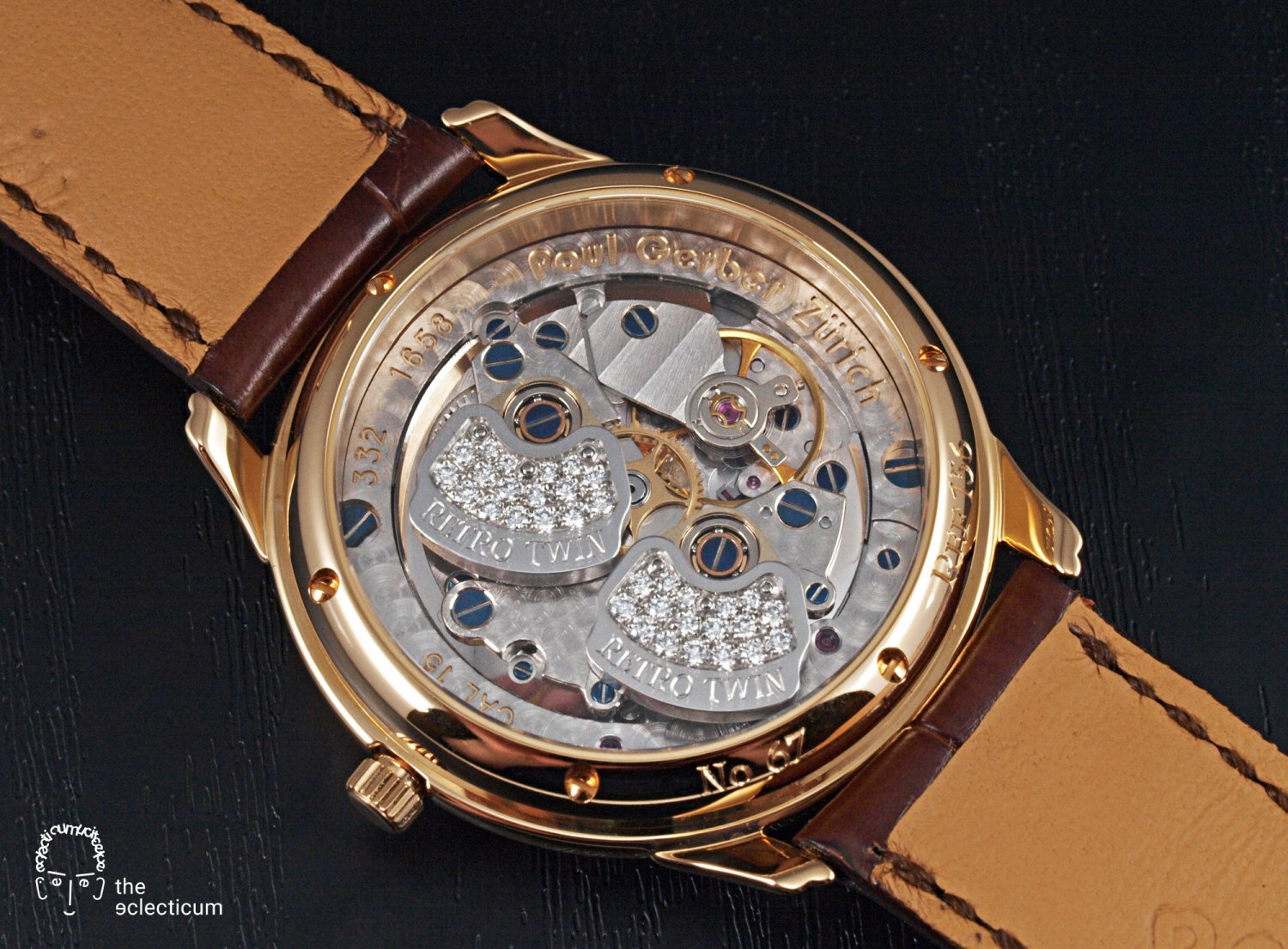 Paul also developed a great number of constructions for other brands, such as the alarm complication into the Valjoux 7750 for Fortis.

More recently, having passed official retirement age in Switzerland, Paul Gerber takes the freedom to work only on projects which satisfy him, and devote more time to fostering the knowledge of watchmaking, particularly through the immersive hands-on course for collectors: 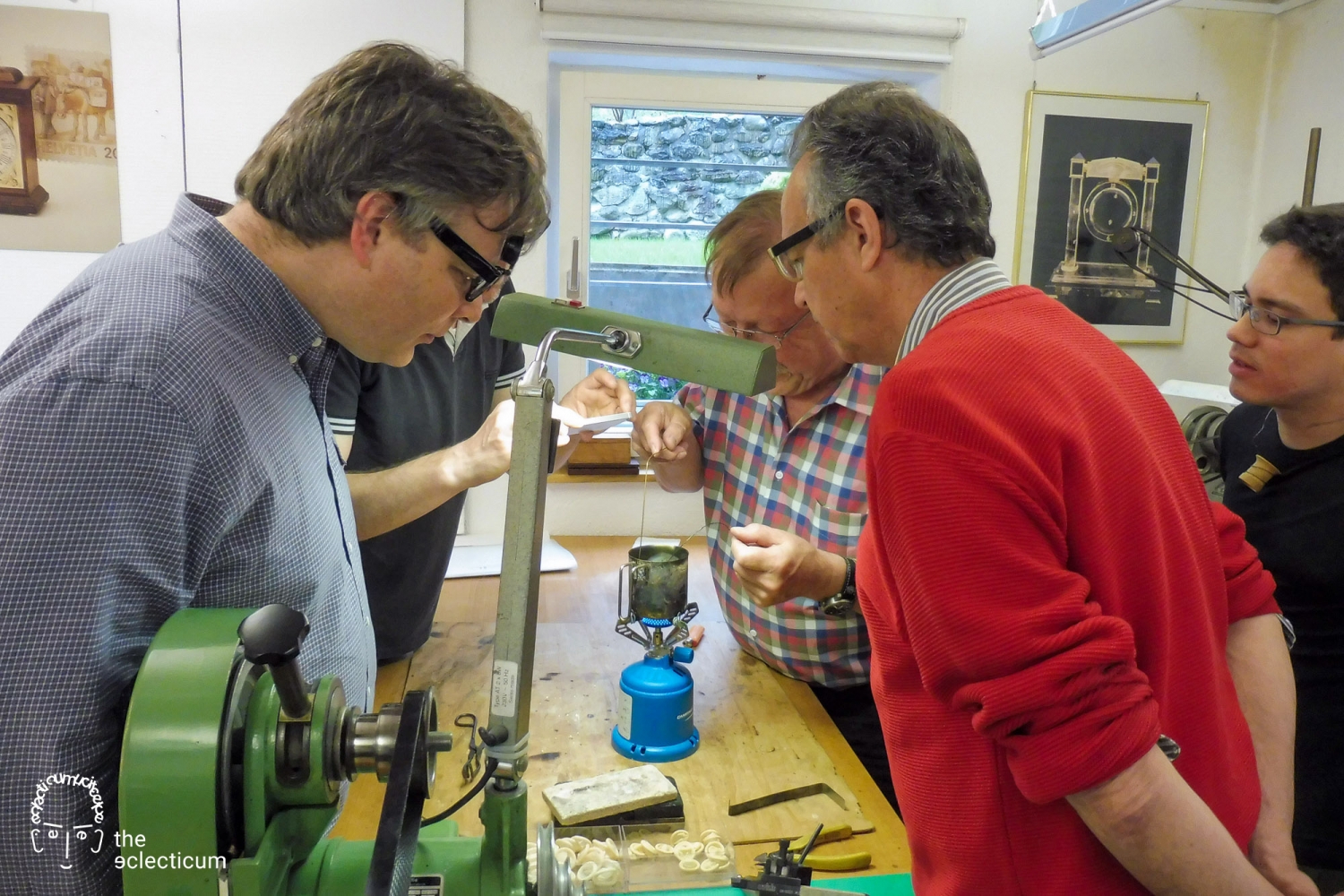 (Paul Gerber teaches his workshop participants how to heat-blue screws)

Seconds and multiple rotors – these bring us to the watch I want to present in this article: the Cal. 41. This watch refers to Paul’s second in-house movement (after the Cal. 33 form watch using his own proprietary escapement, perhaps a topic for the future…), a comparatively large automatic movement with 100 h autonomy (thanks to two barrels) and a 21,600 A/h balance. 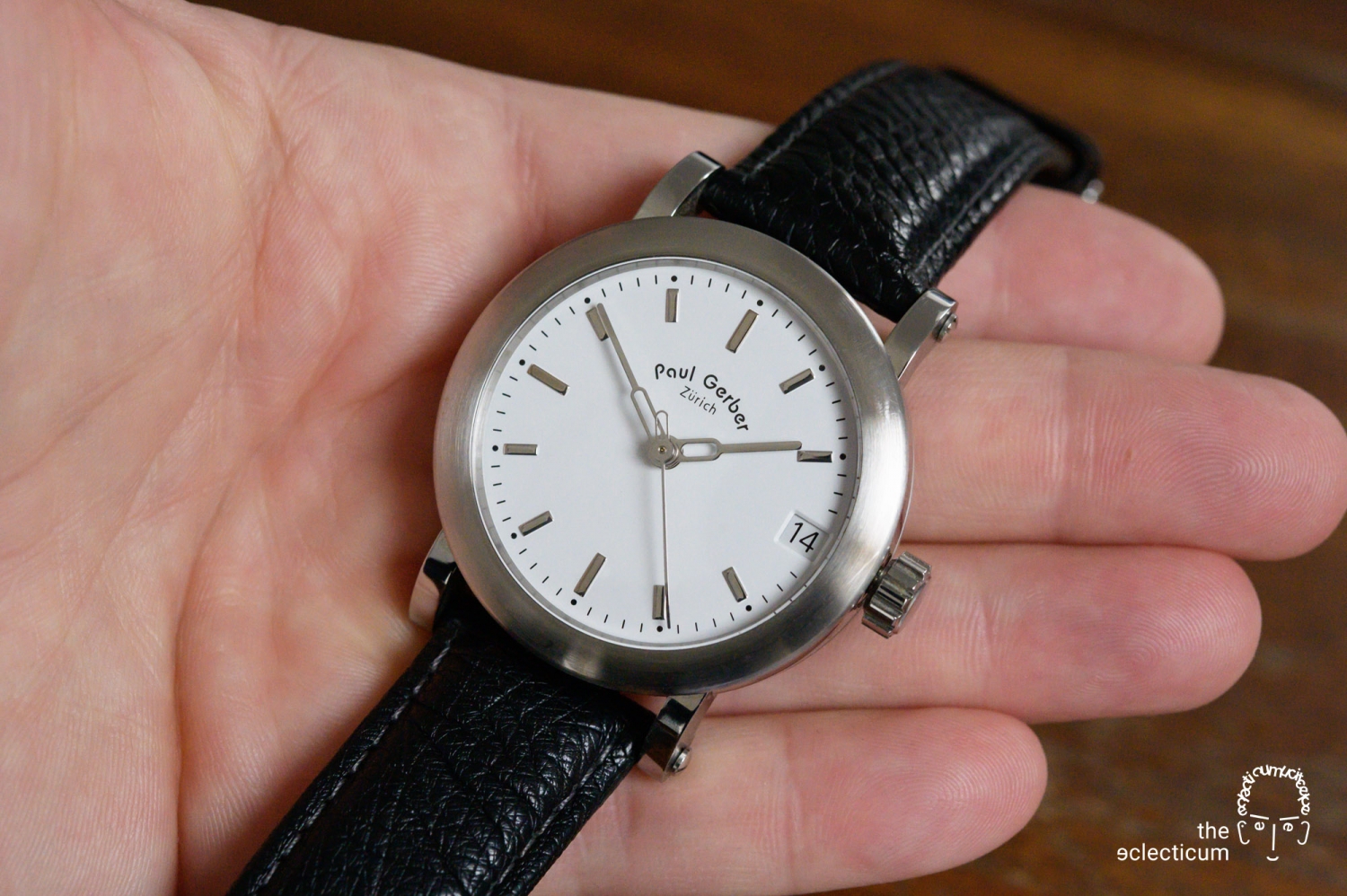 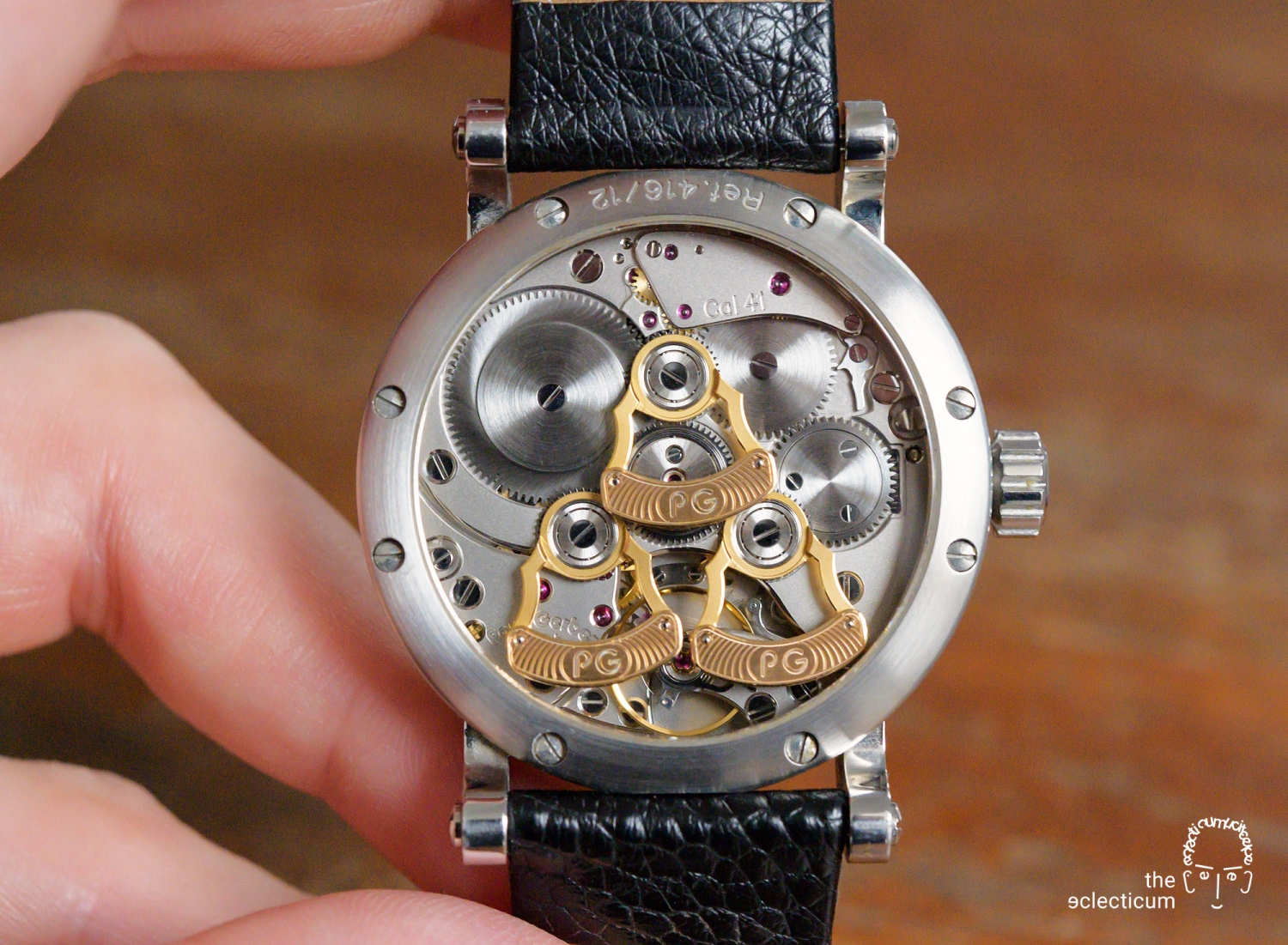 Again, the immediately striking features are not only the fine finish with matt surfaces and hand-anglaged edges, but again the rotors – three of these, and again they magically do not touch each other. 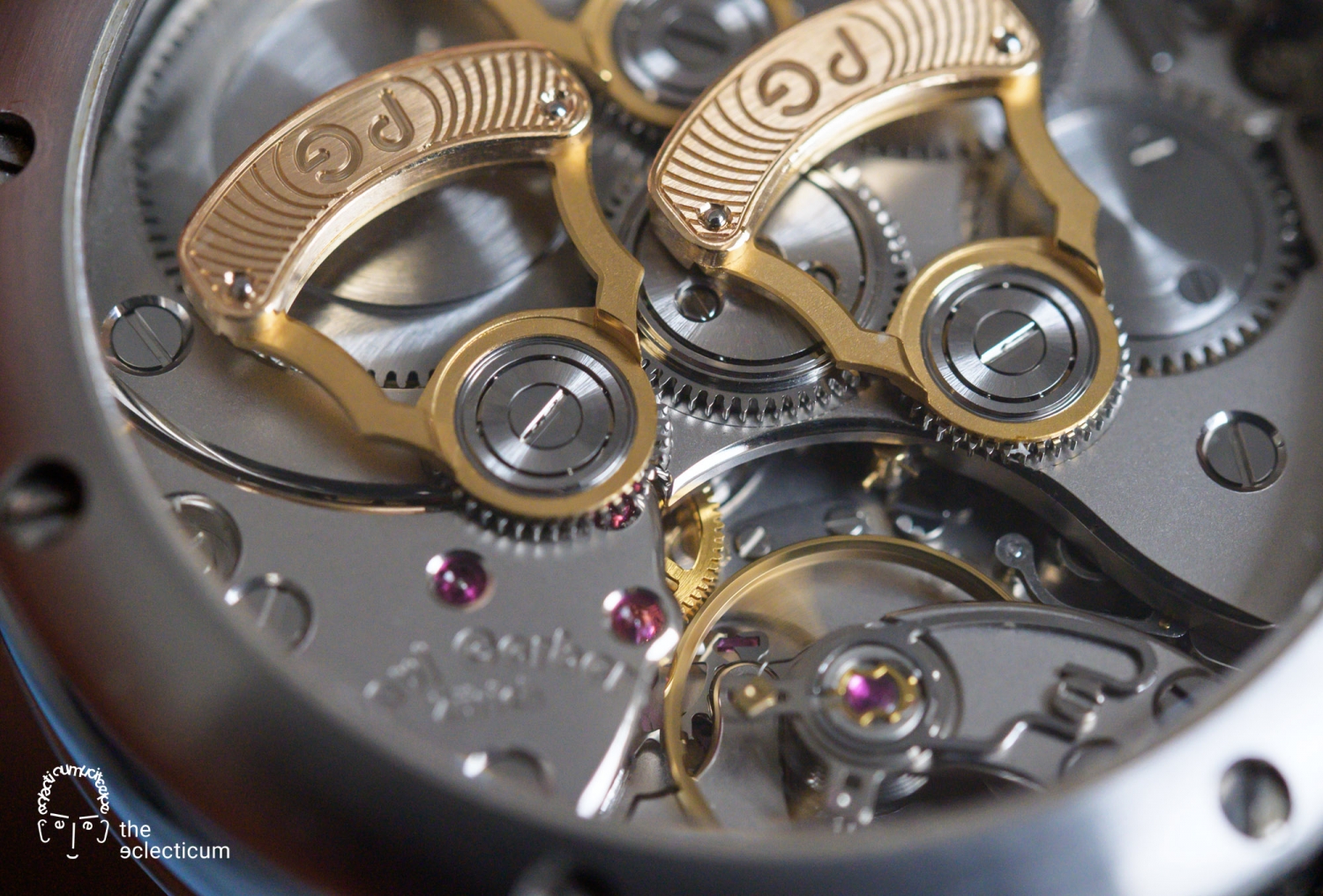 (Solid golden rotors reside atop a finely finished movements. Note the polishing and the matter surfaces. Top right above the balance cock you’ll note some levers for the switchable seconds display – see further down!) The surprising (-ly simple) yet absolutely logical reason for this is a central command instance: the large wheel in the centre coordinates the triple rotors and fixes their relative position via the large central wheel. This way, they can never bump into their siblings, the same principle already employed with the Retro twin. The rotors wind in both directions, btw. 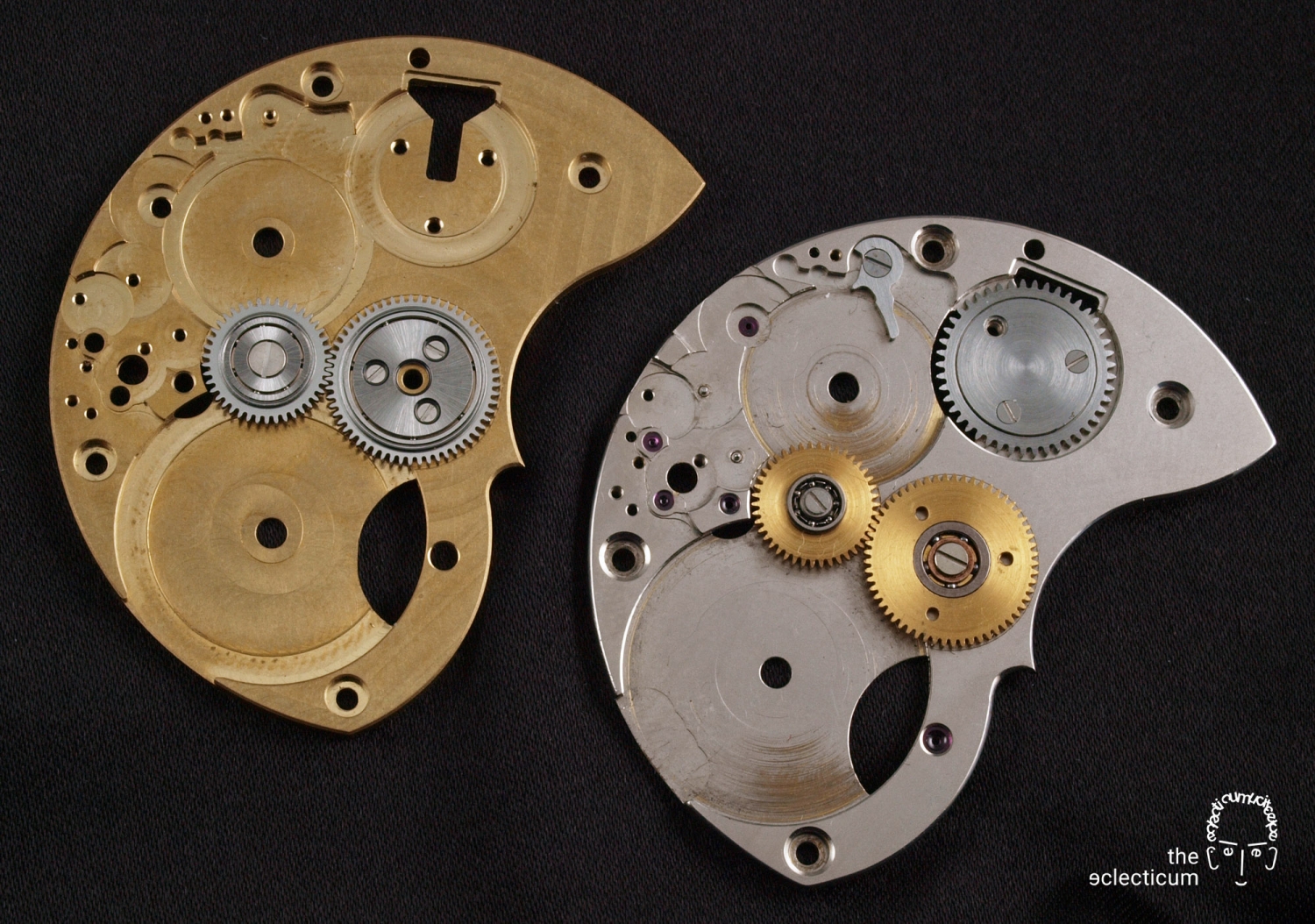 (Each of the rotors has its own small ball bearing and meshes into the large central coordinating wheel. Left, production version main plate with custom-made ball bearings; right prototype with smaller commercial bearings)

The seconds – at your command, Sir!

But the Cal. 41 has – upon custom order – another ace in its sleeves: The central seconds hand can smoothly move permanently or jump in seconds interval just like a quartz watch. All this switchable just as the owner prefers it.

In normal production watches such change in operation is controlled by a pusher at 2 o’clock, while the very watch I present here can achieve this with a simple push on the crown. A second push on pusher or crown respectively, return the original state.

Its really worth watching this live:

It is believed that only two such ‘coaxial monopusher’ watches exist where the crown doubles as second control knob, with one on the wrist of Paul Gerber himself. The reason for this is both cost and practicability: the crown operated version requires that the crown is turned a bit back and forth between switches to allow internal gearing to re-align. This is a small imperfection, but enough for Paul to decide against it. 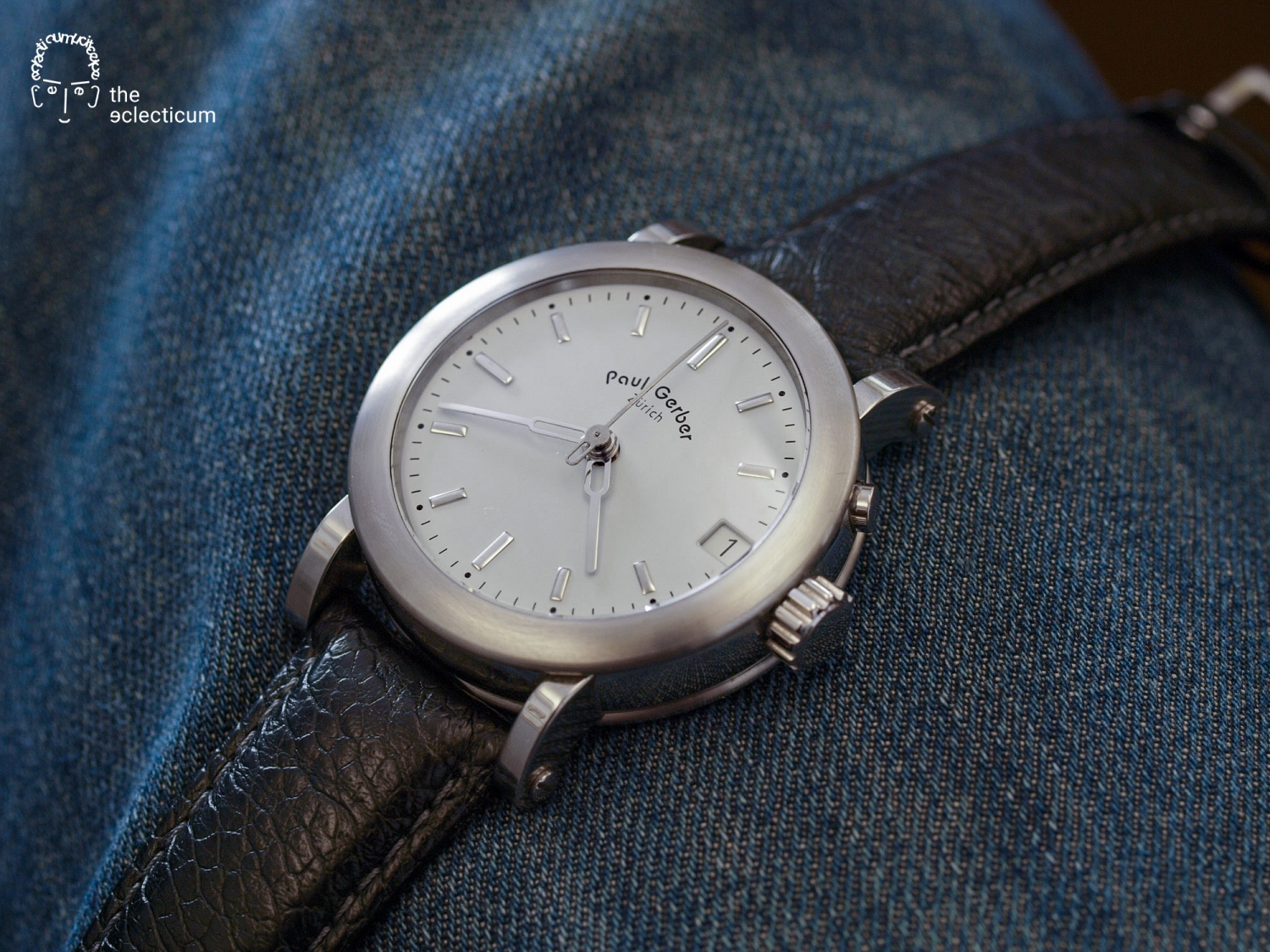 (A regular Paul Gerber Cal. 41 with second hands pusher at 2 o’clock) Regardless which version, the switching seconds is controlled by a complex gearing with a ‘column wheel’ type of controller – here for the production push-button version: 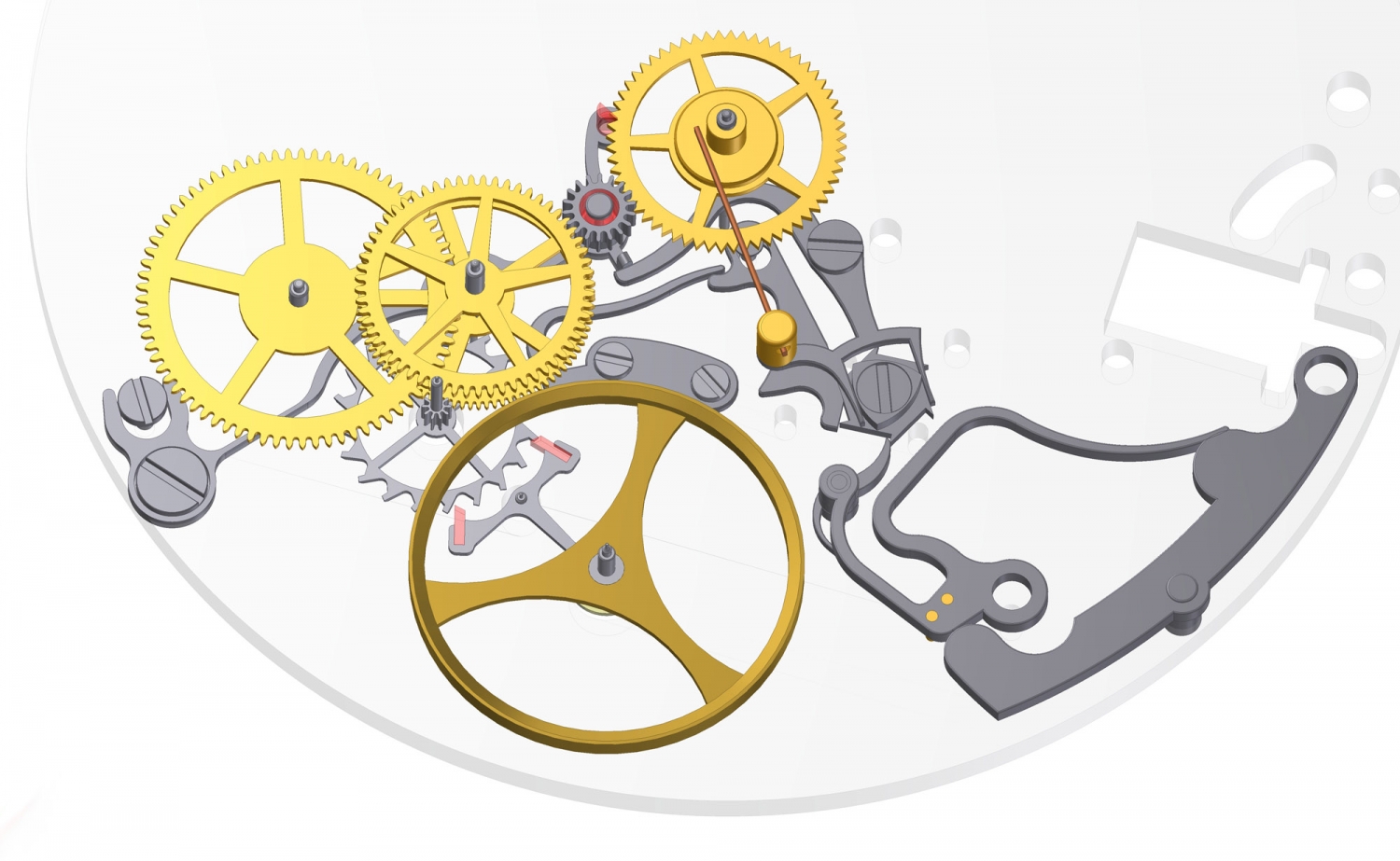 Essentially, a lever system of elaborate shape which flips a gear in and out of the seconds hand train, thereby having the hand either be driven by the gears directly or via a jumping seconds rocker. The ‘column wheel’ actually resembles more a Wankel engine than columns… 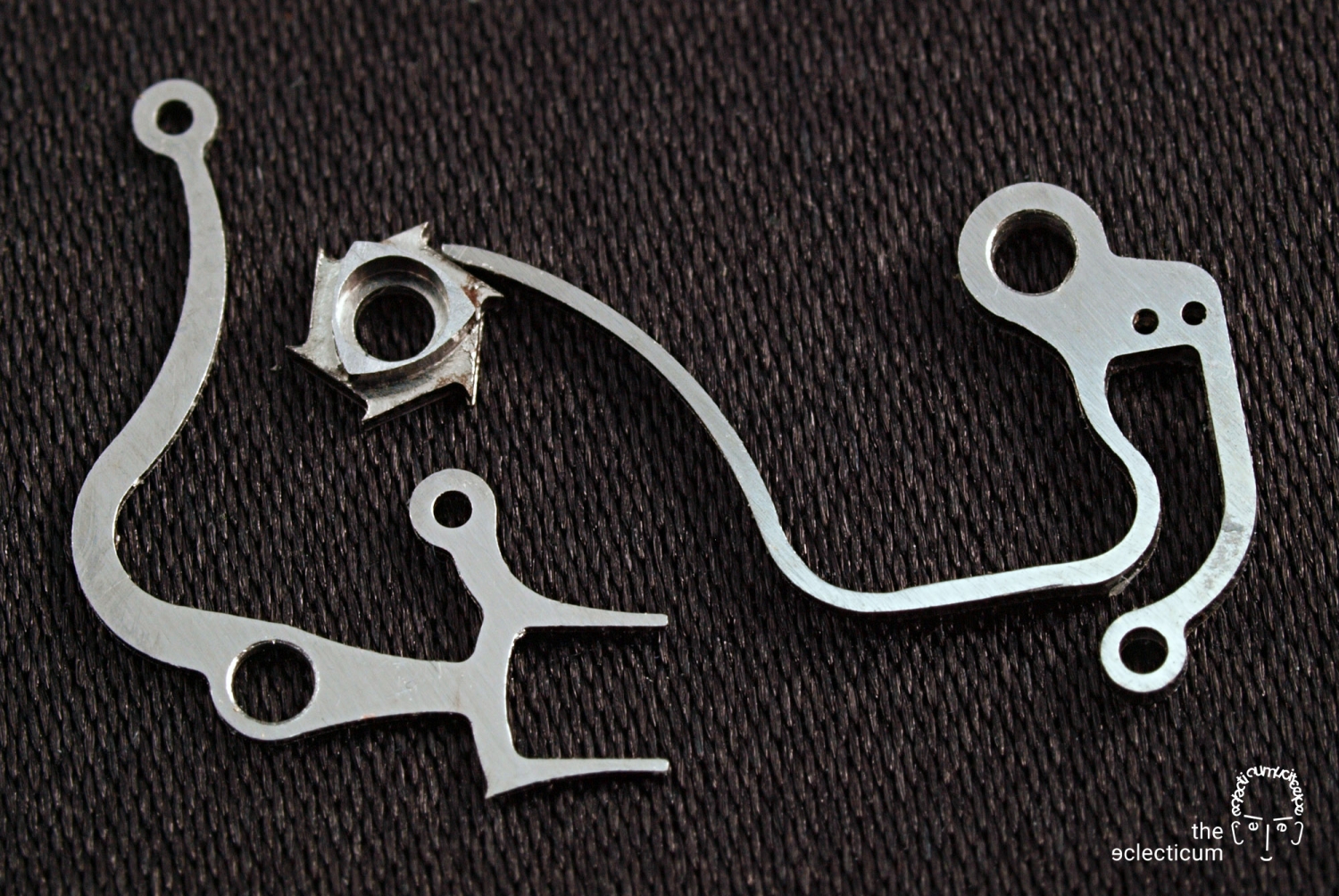 (Mechanics for selecting the seconds hand style. Note the ‘Wankel engine’ like column wheel) Next to the in-house movement, the watch comes in a stainless-steel case (42mm) of Paul’s own design, like the hands. It’s a bold design with a number of fine features. 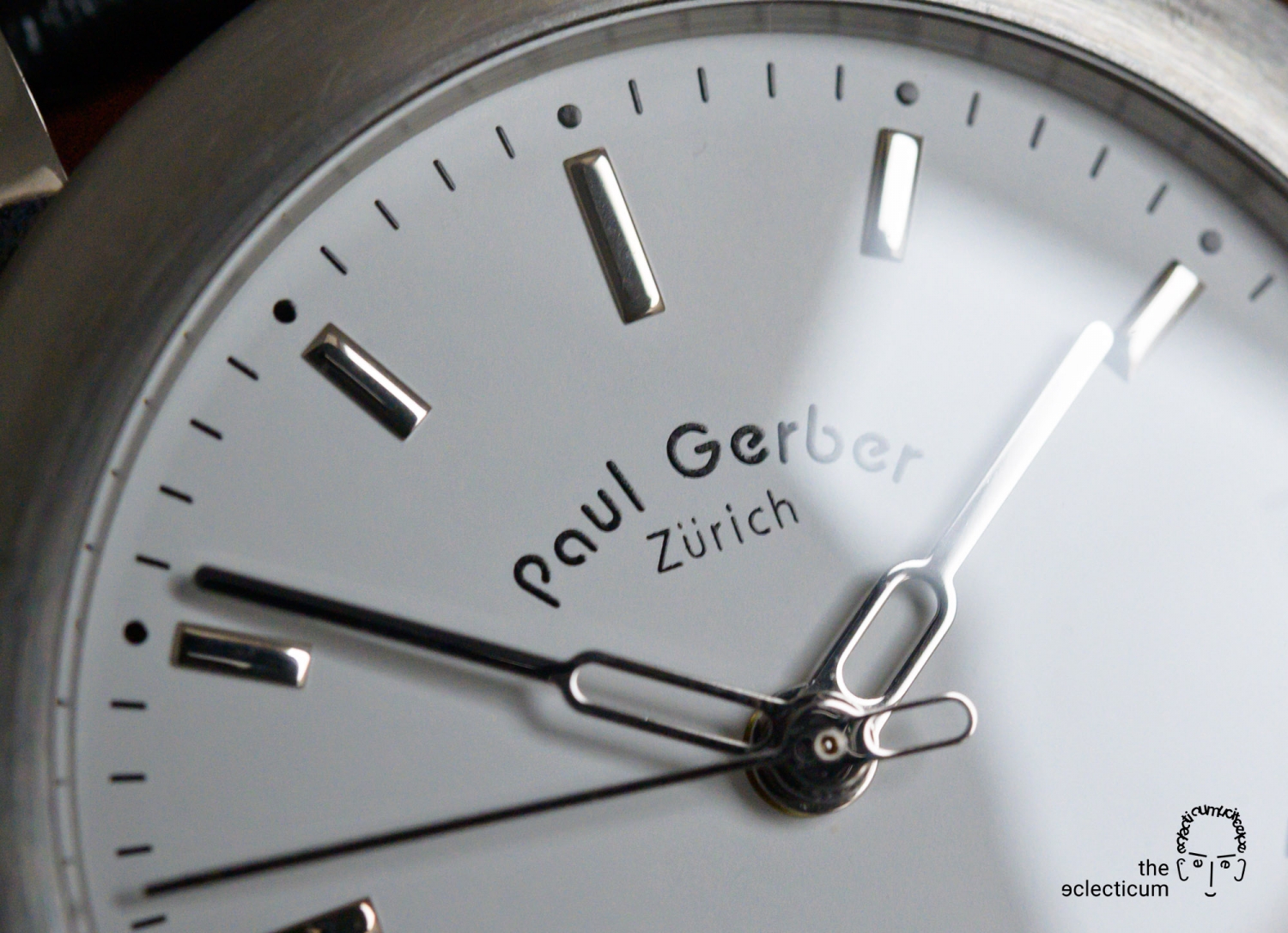 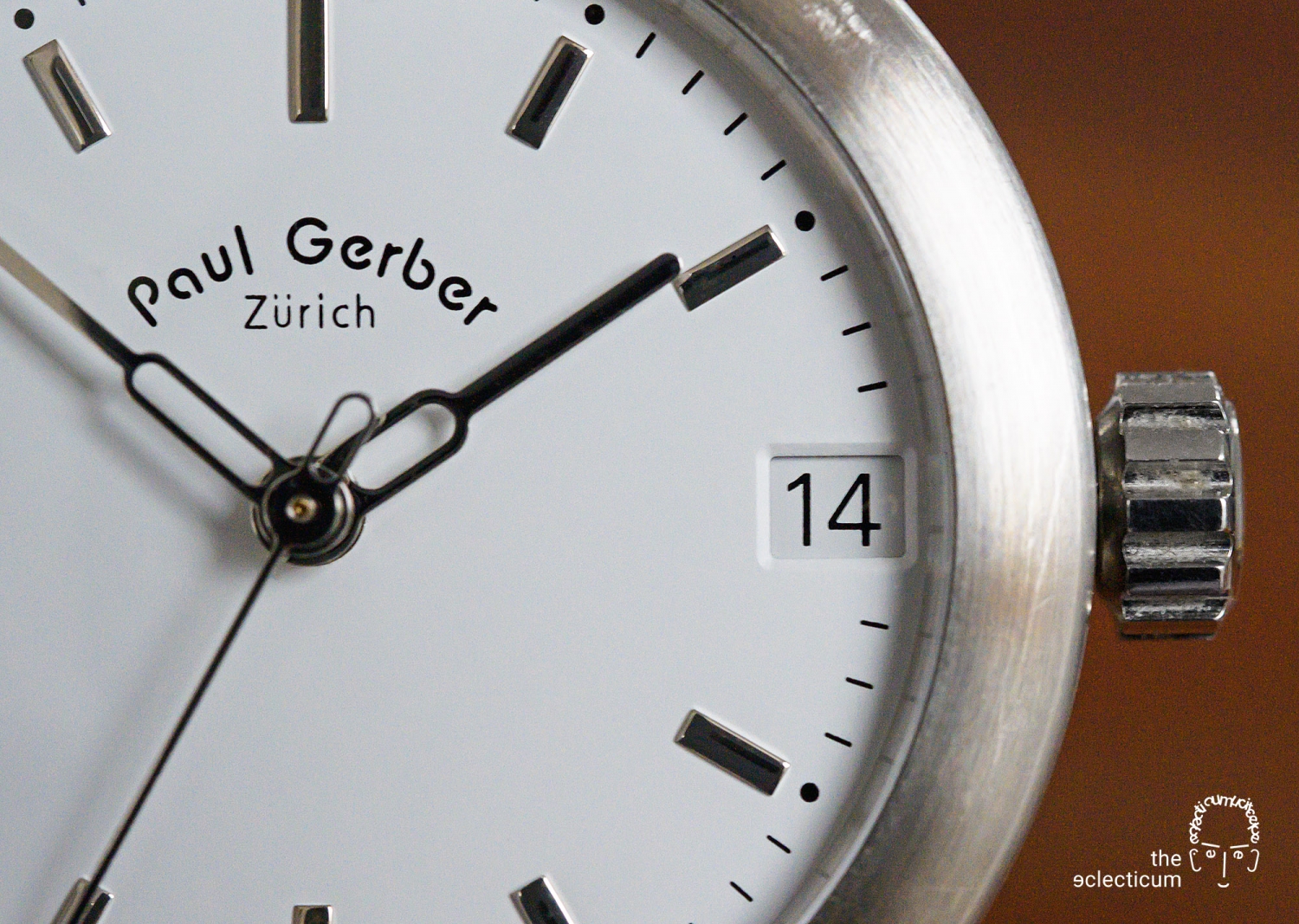 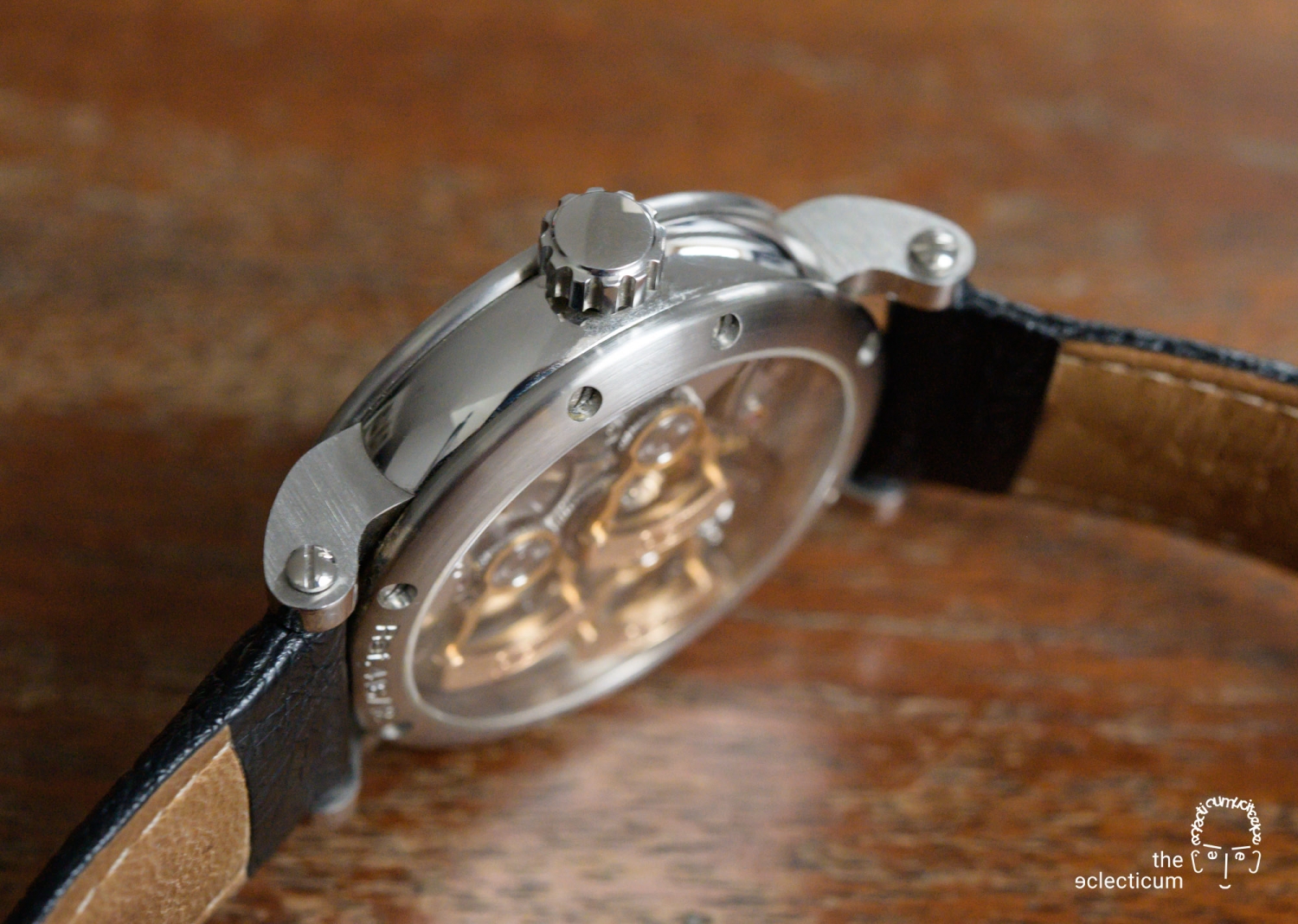 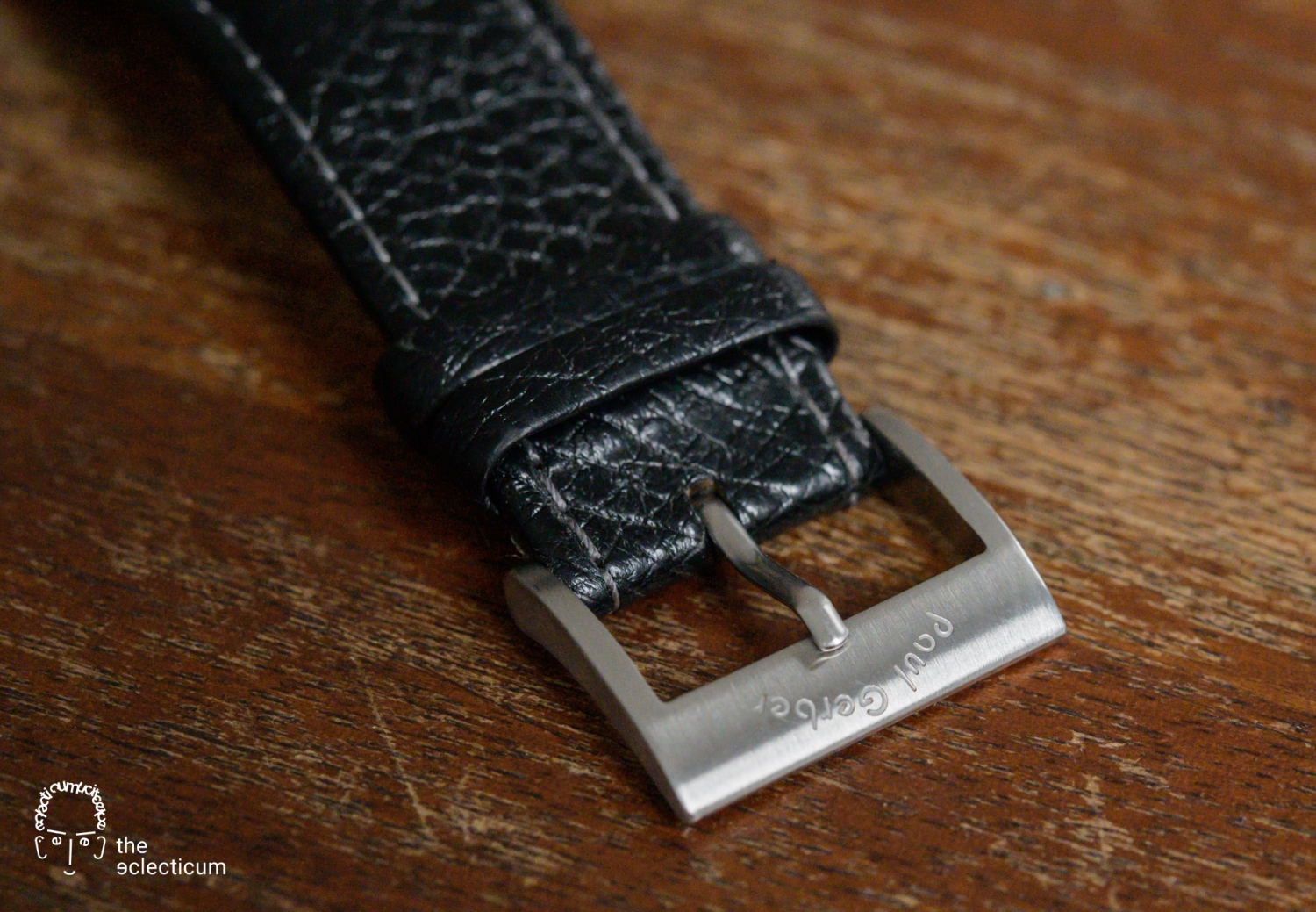 It is particularly the case which rewards a closer look: the lugs are detachable, which facilitates servicing, and attached to the case with dovetail joints secured by screws. Even if screws get loose of break, the lugs still remain securely in their place. Also, the case itself is very service-friendly, so refinishing for example is really easy. 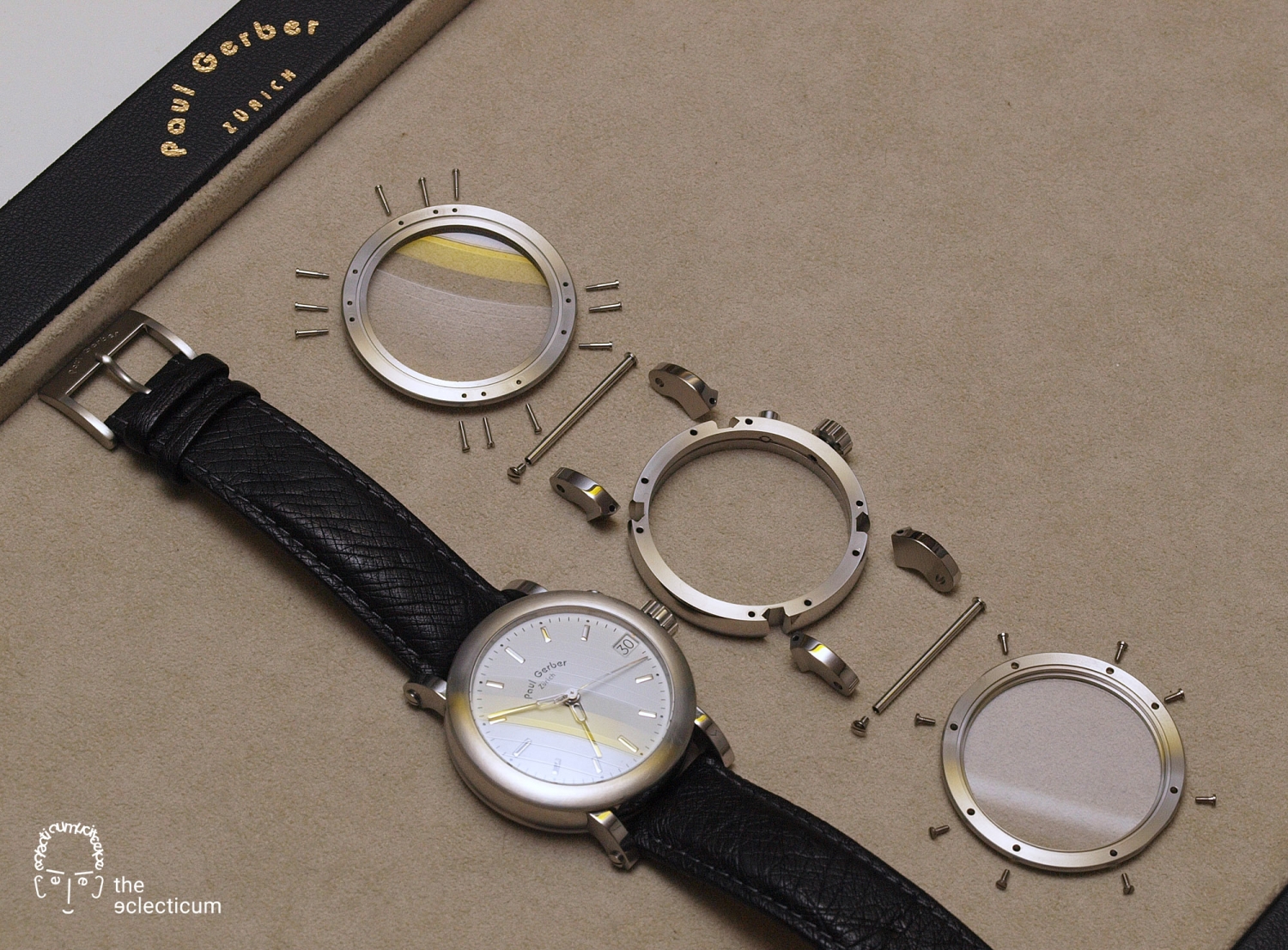 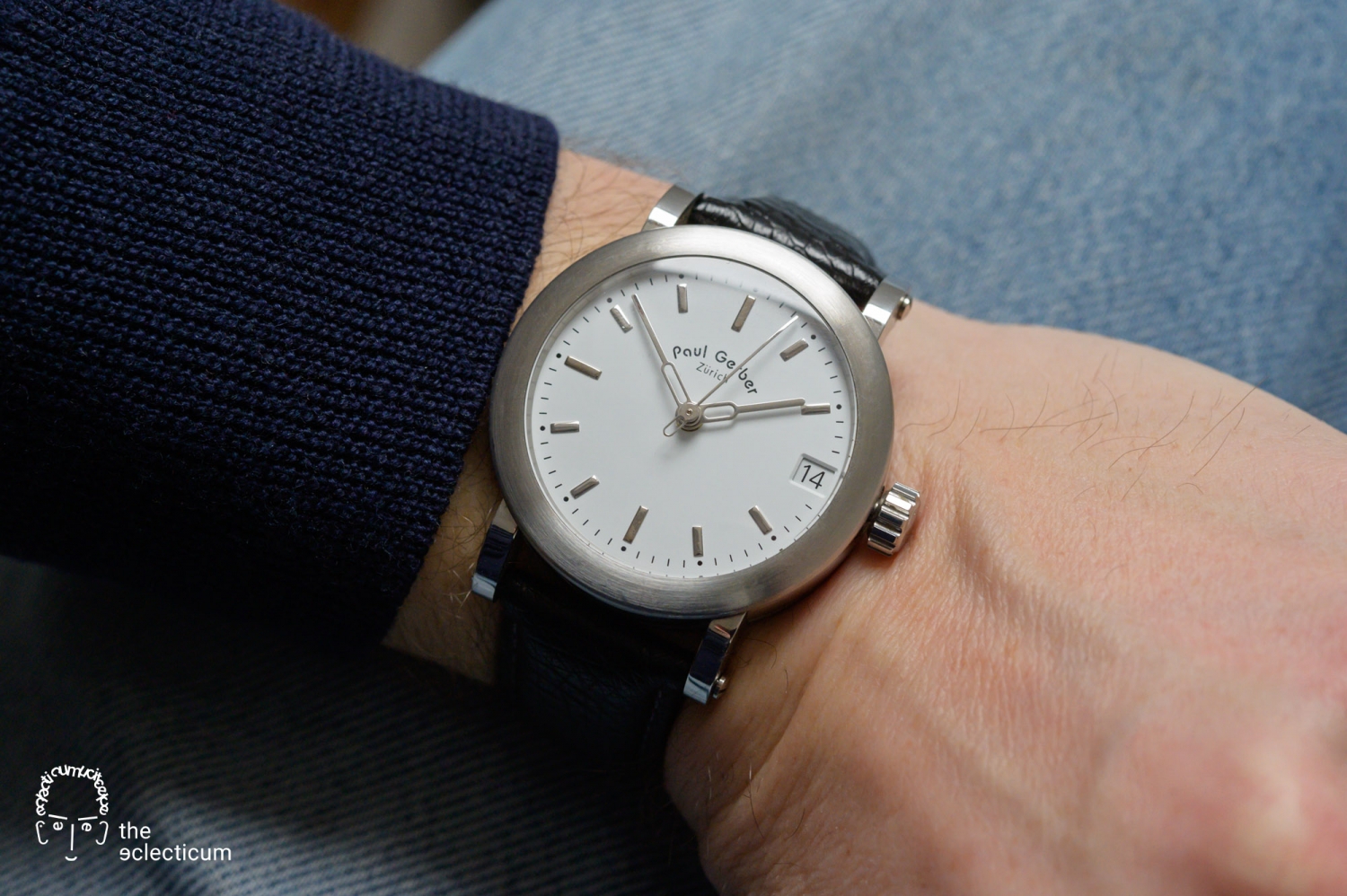 The Cal. 41 teaches us that it is not always the extreme complication which tells the most about a person! In the context of Paul’s œvre the watch combines his best-known constructions in such a way that it carries so many aspects of Paul Gerber’s watchmaking philosophy: its humorous, at times perplexing, but always practical and not too flashy. 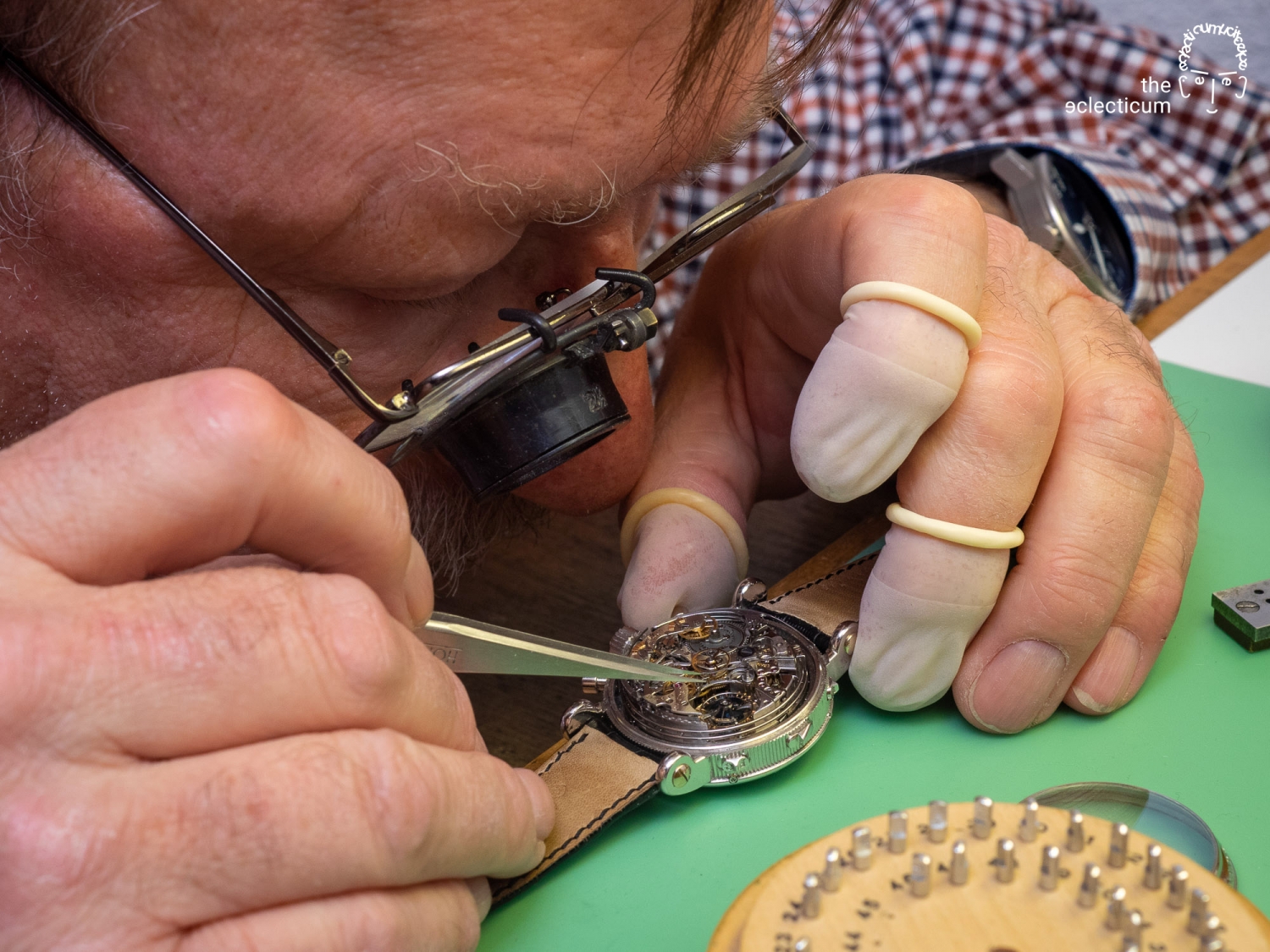 (Paul Gerber working on the Superbia Humanitatis) Exactly as Paul Gerber is as well. And since we are at it: happy birthday, Paul!

the eclecticumThe OMEGA Speedmaster Moonwatch Cal. 3861 – an icon made fit for the futu...
Scroll to top