URWERK: the new ‘UR-112 Aggregat’ – hands-on with a most complicated gearbox for your wrist

The horological mechanics put ‘time – at your service!’ with a clever use of planetary gear systems, and finally overcome their dislike of silicon – meet the Urwerk UR-112 Aggregat 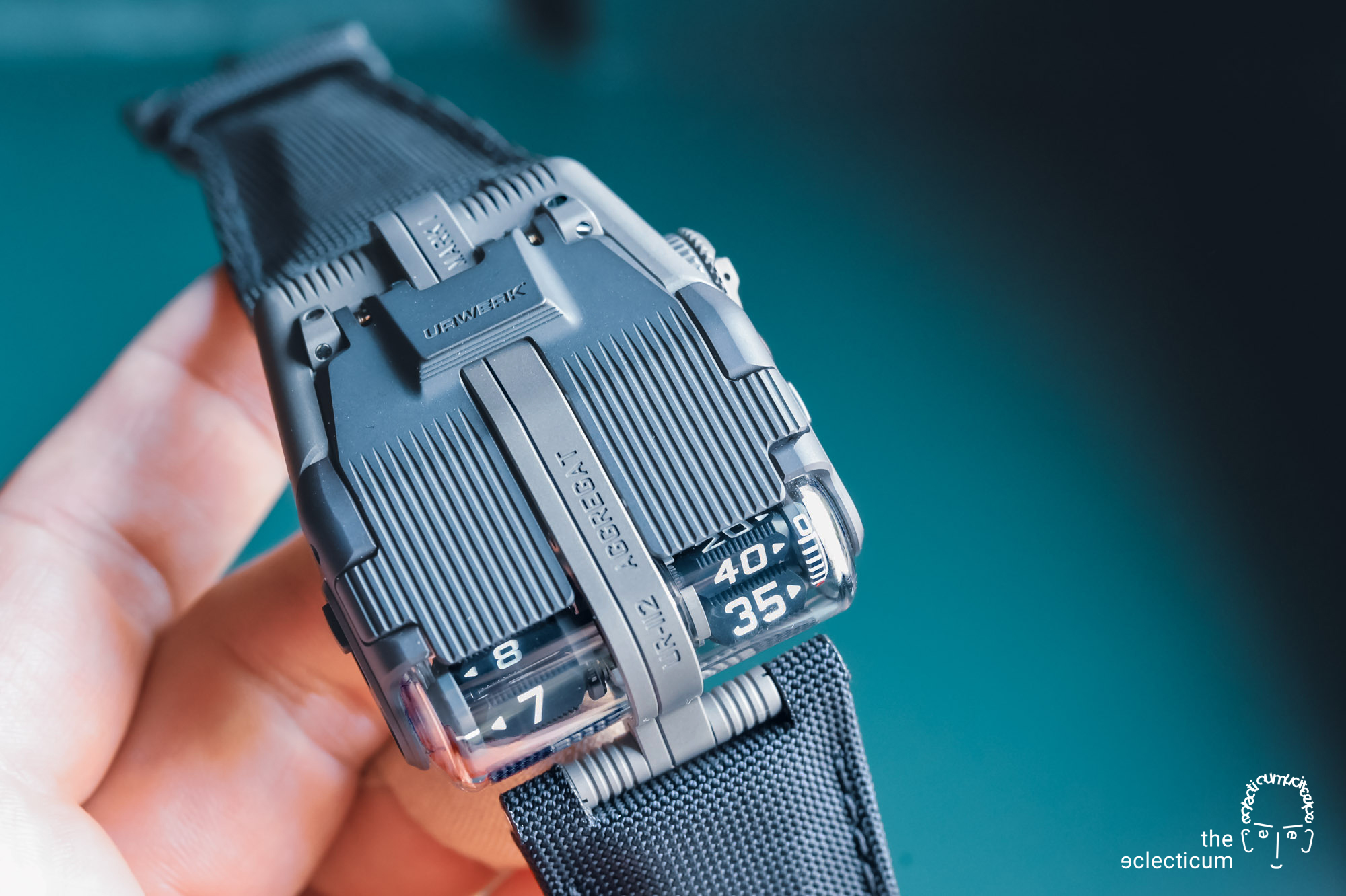 Well in the – vertical – line…

Today, Urwerk presented the new UR-112 Aggregat, one of their fewer pieces which use vertical satellite systems instead of horizontal ones to tell time. As such, they are in the tradition of legendary Urwerk watches such as the UR-210 of 2012 or more recently, and more directly related, the UR-111C of 2019, watches that belong to Urwerk’s Special Projects collection. 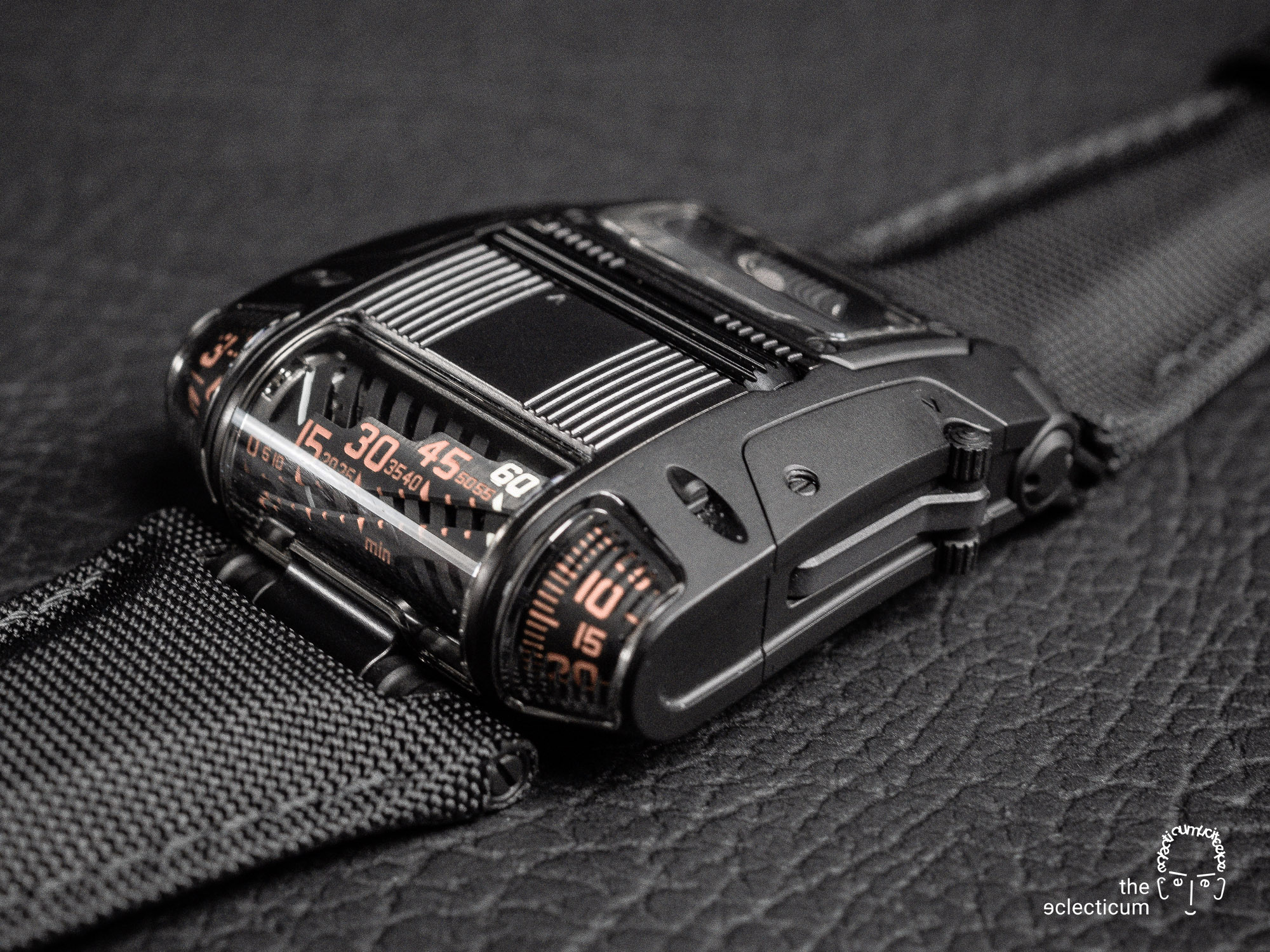 (Urwerk UR-210 (top) and UR-111C (bottom)) Oh yes, this latter watch, the UR-111C, can be regarded as the direct ancestor of the new UR-112, not only was as the direct succession in numbering suggests. Both have a front-facing, ‘tubular’ and separated time display with jumping hour, two vertical satellite systems, a ‘digital’ second indication at the top and an elaborate crown system. 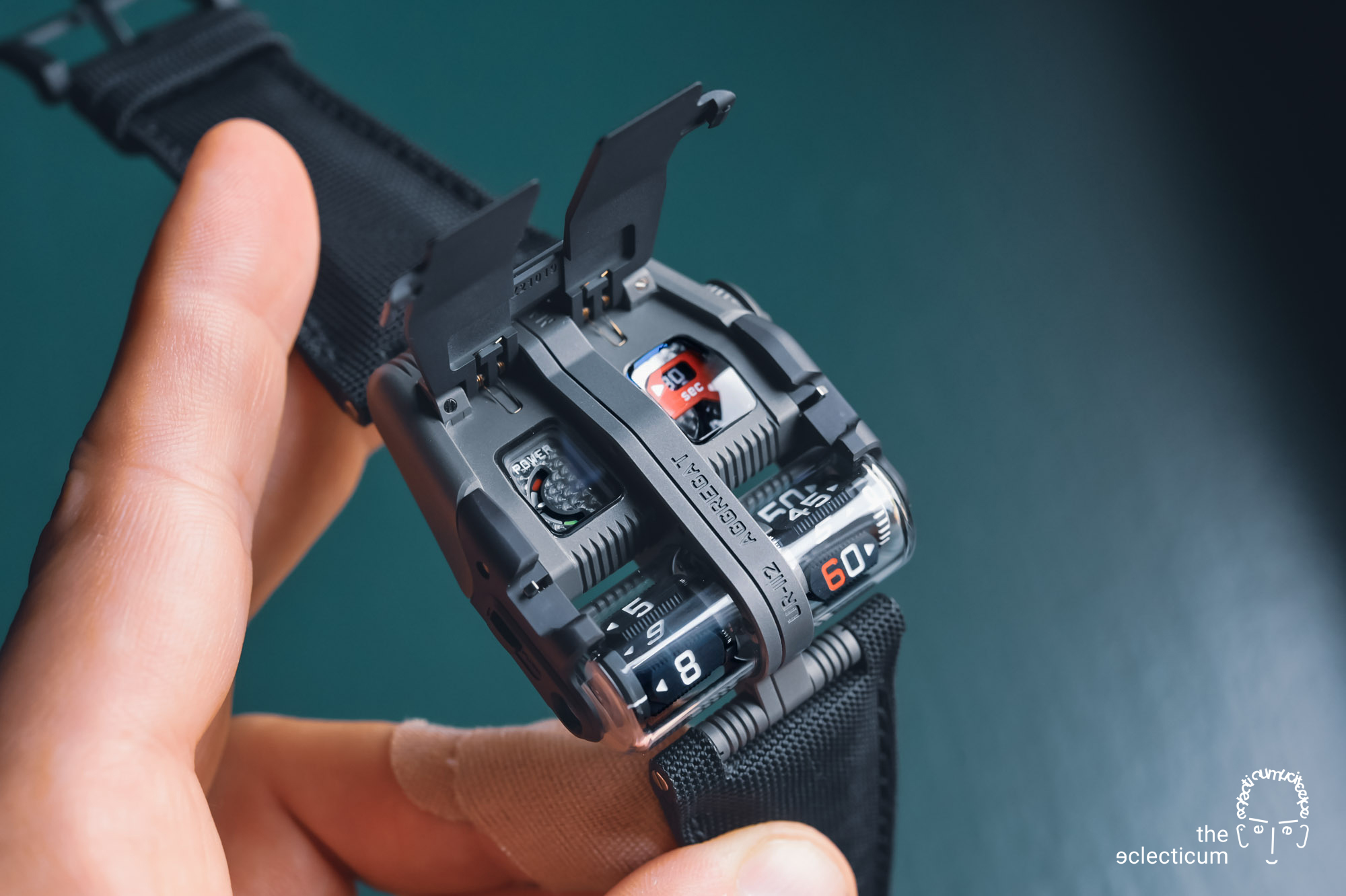 (Urwerk UR-112 Aggregat, with opened case top to show power reserve (left) and seconds (right)) For indicating the time, the UR-112 Aggregat is equipped again with a front-facing rotational display, proving hour (left, jumping) and minute (continuous, right) information. 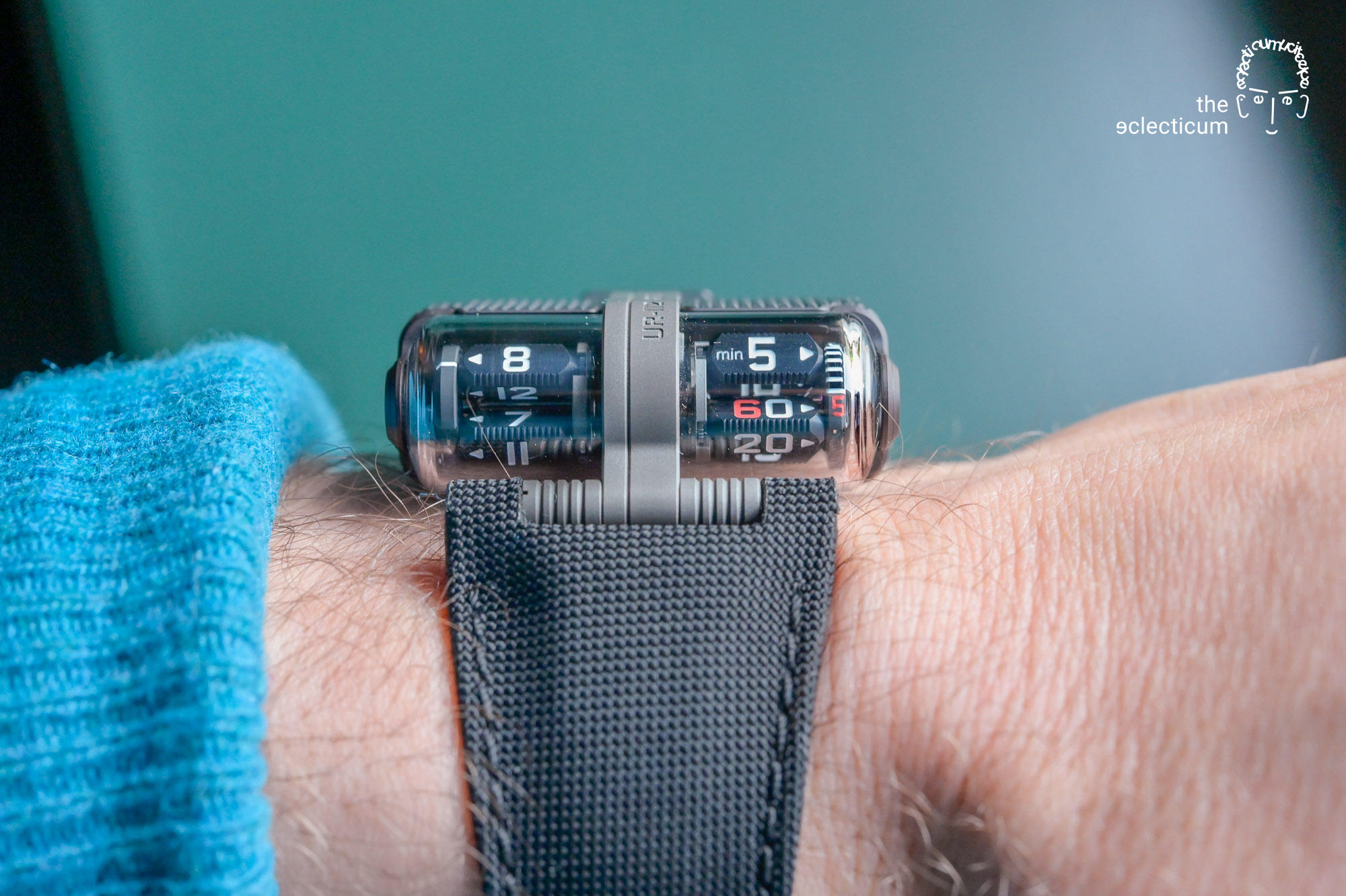 Under the hood there is also a ‘digital’ second (with a ‘display wheel’ made in the silicon, the first time Urwerk uses this material) and a power reserve indication: 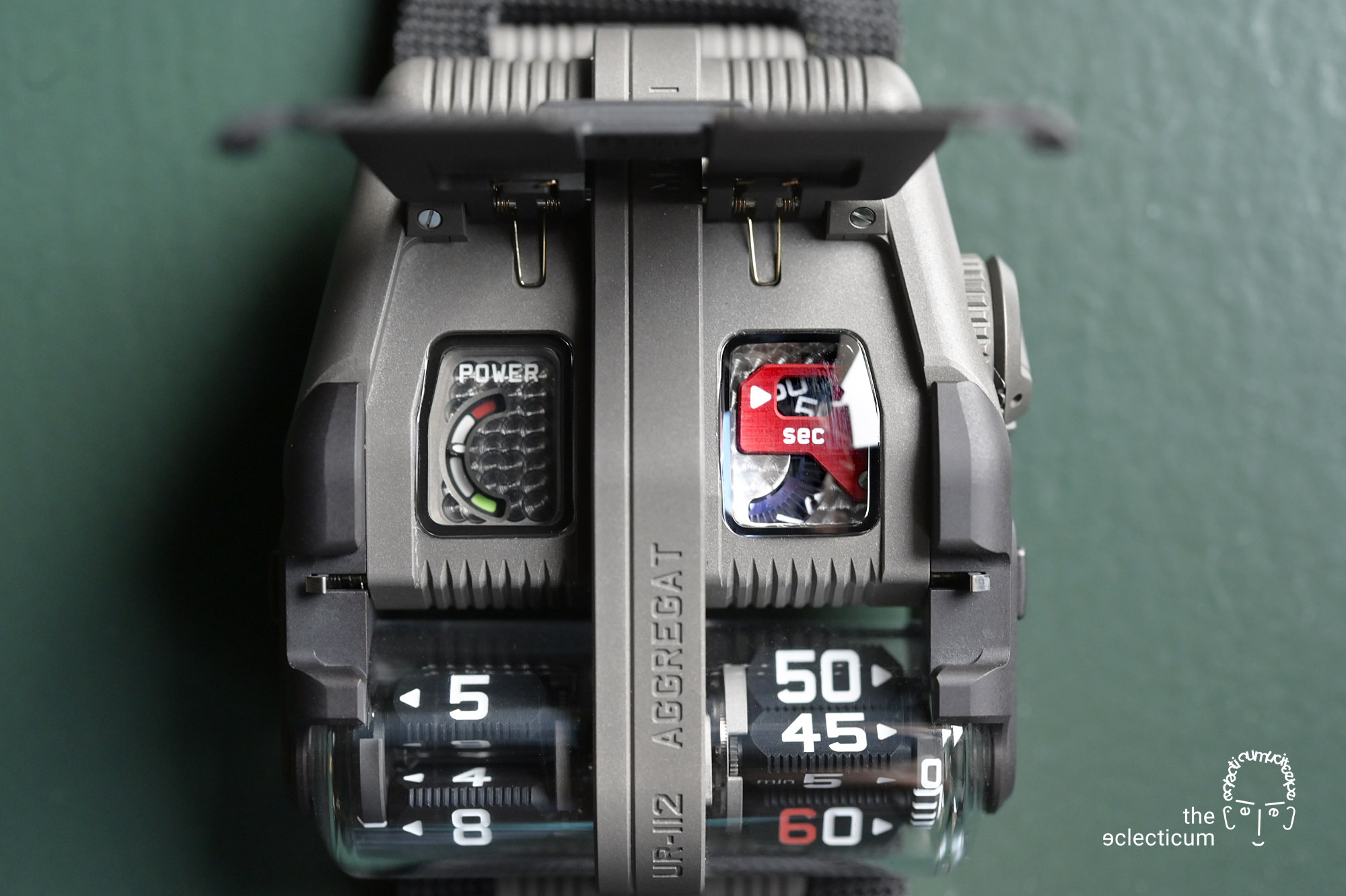 A tron-like body with a spinal cord

The case of the UR-112 Aggregat is a bold, compact affair made of titanium, arranged around a central spine (there’s a reason for that, look a bit further down), with the two sapphire cones at the front, a hinged case cover and a larger crown. Particularly with the two cones it reminds a bit on the Tron Light Cycle, sans the light: 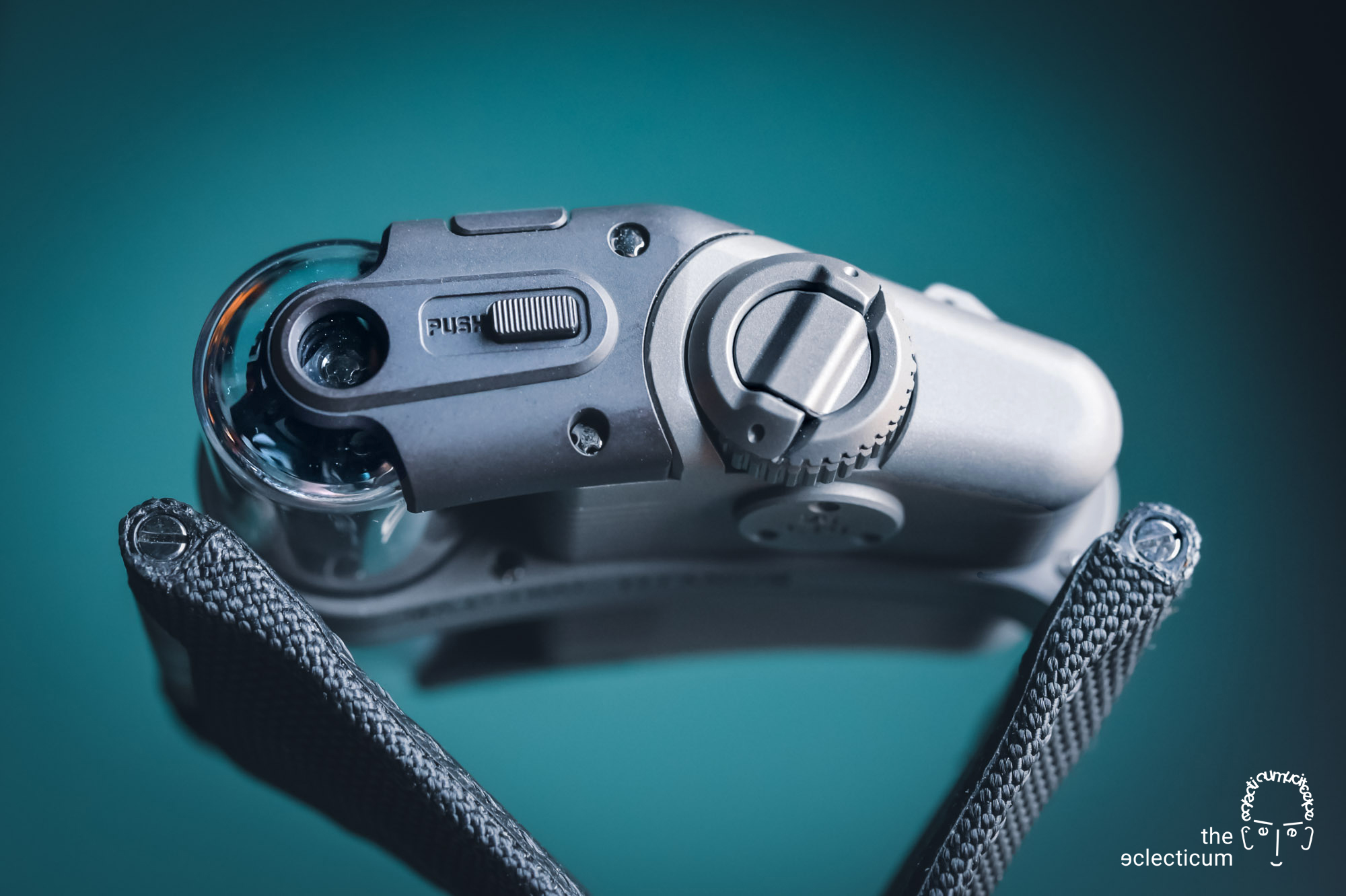 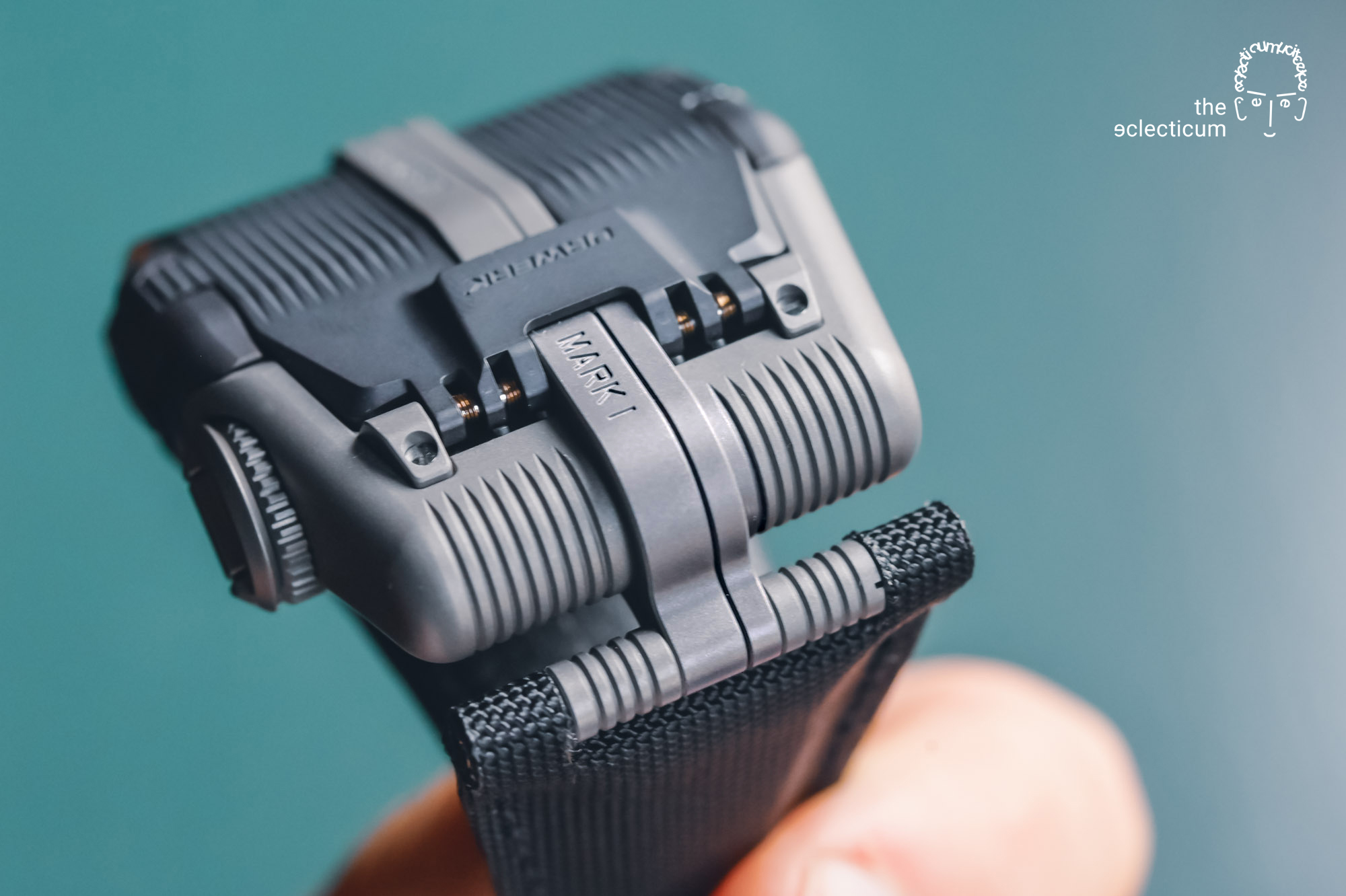 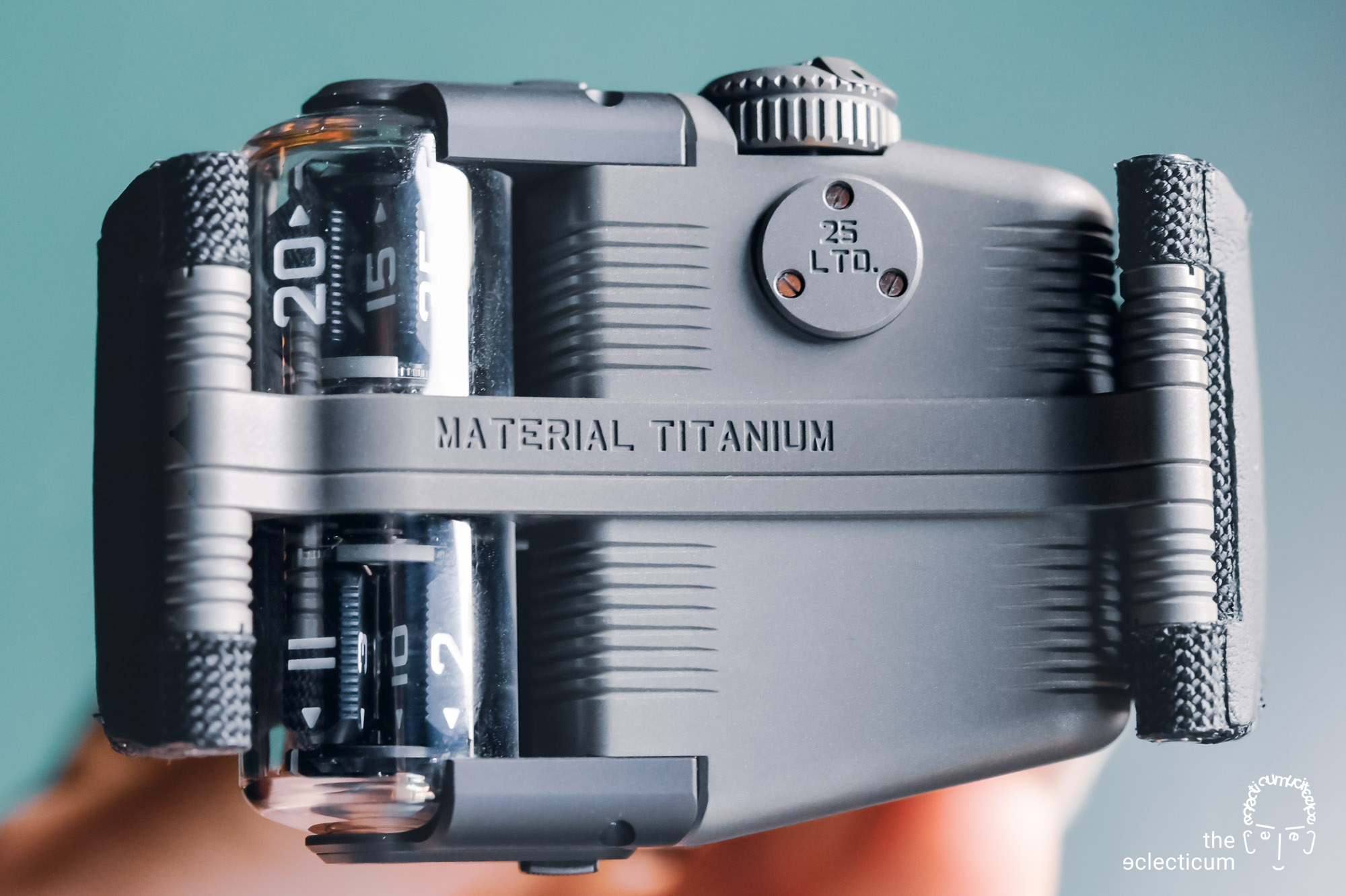 Finally, there is a solid luminous signature on the time indications: 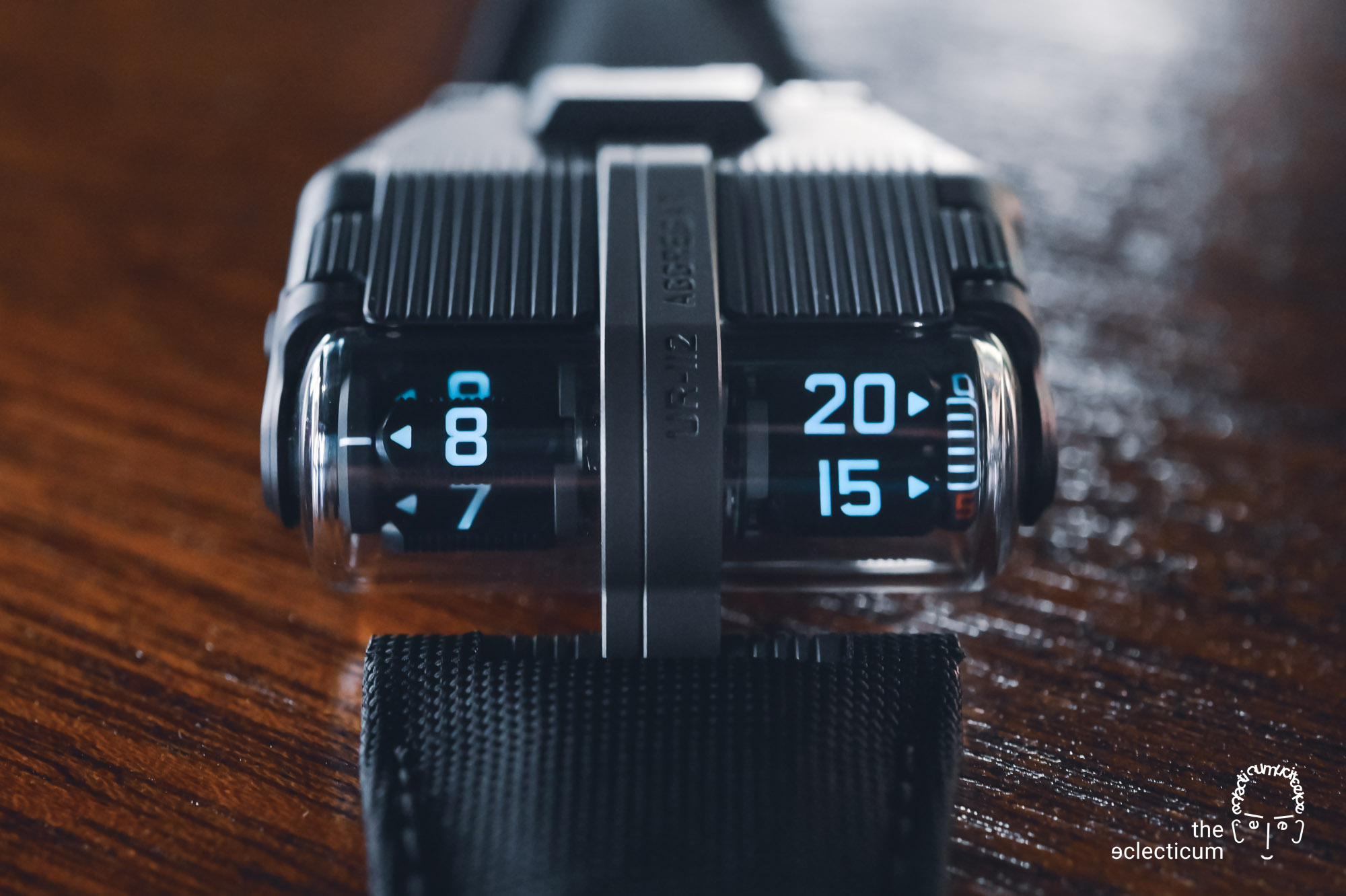 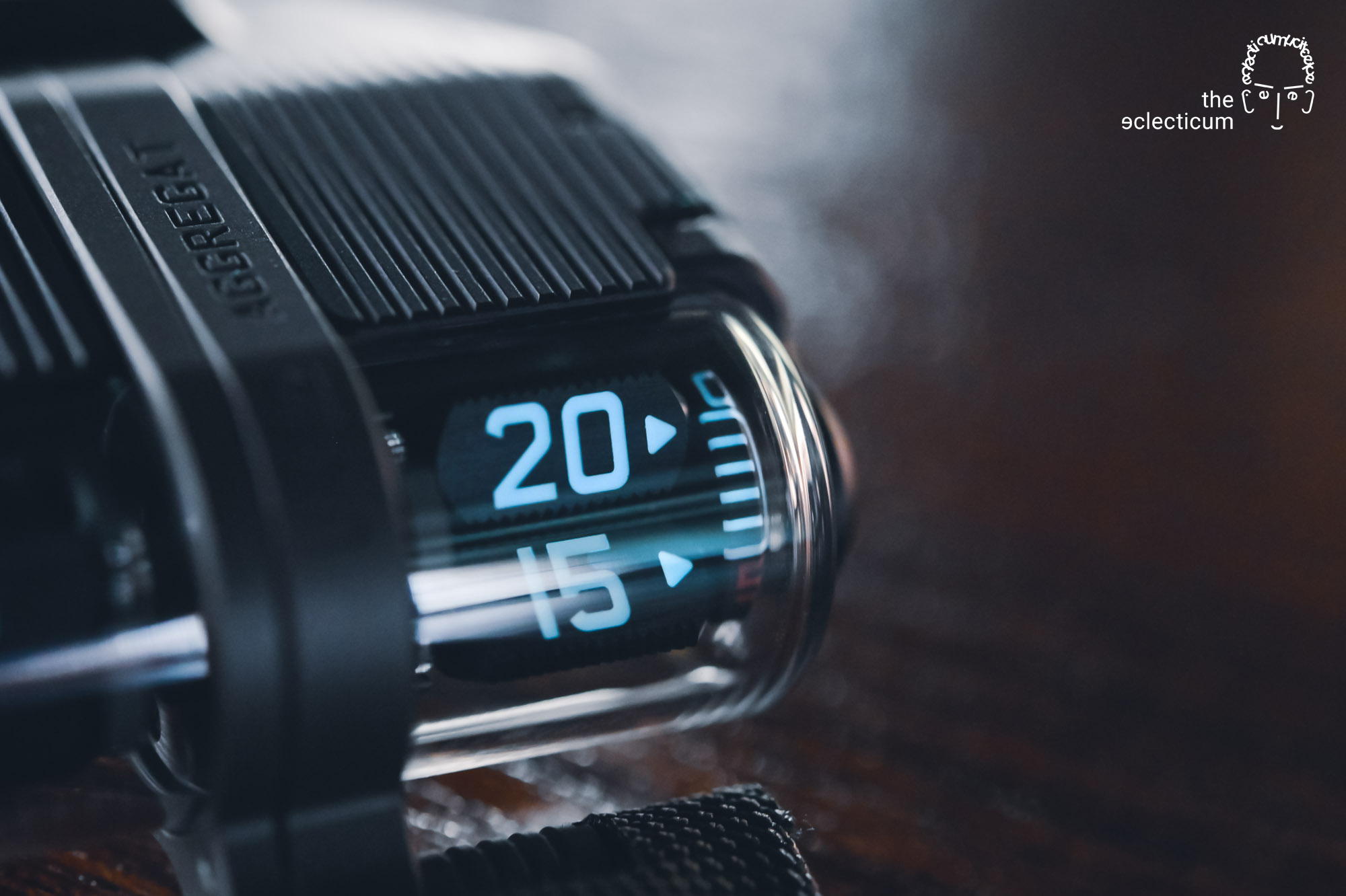 So, on a passing view, the new UR-112 Aggregat appears a lot like a slightly revised UR-111 – but in fact it goes a lot farther, does all in a subtly more sophisticated way than the former – in terms of mechanical complexity or materials used.

For once, just look at the angle of the time paddles, all at a different angle …: 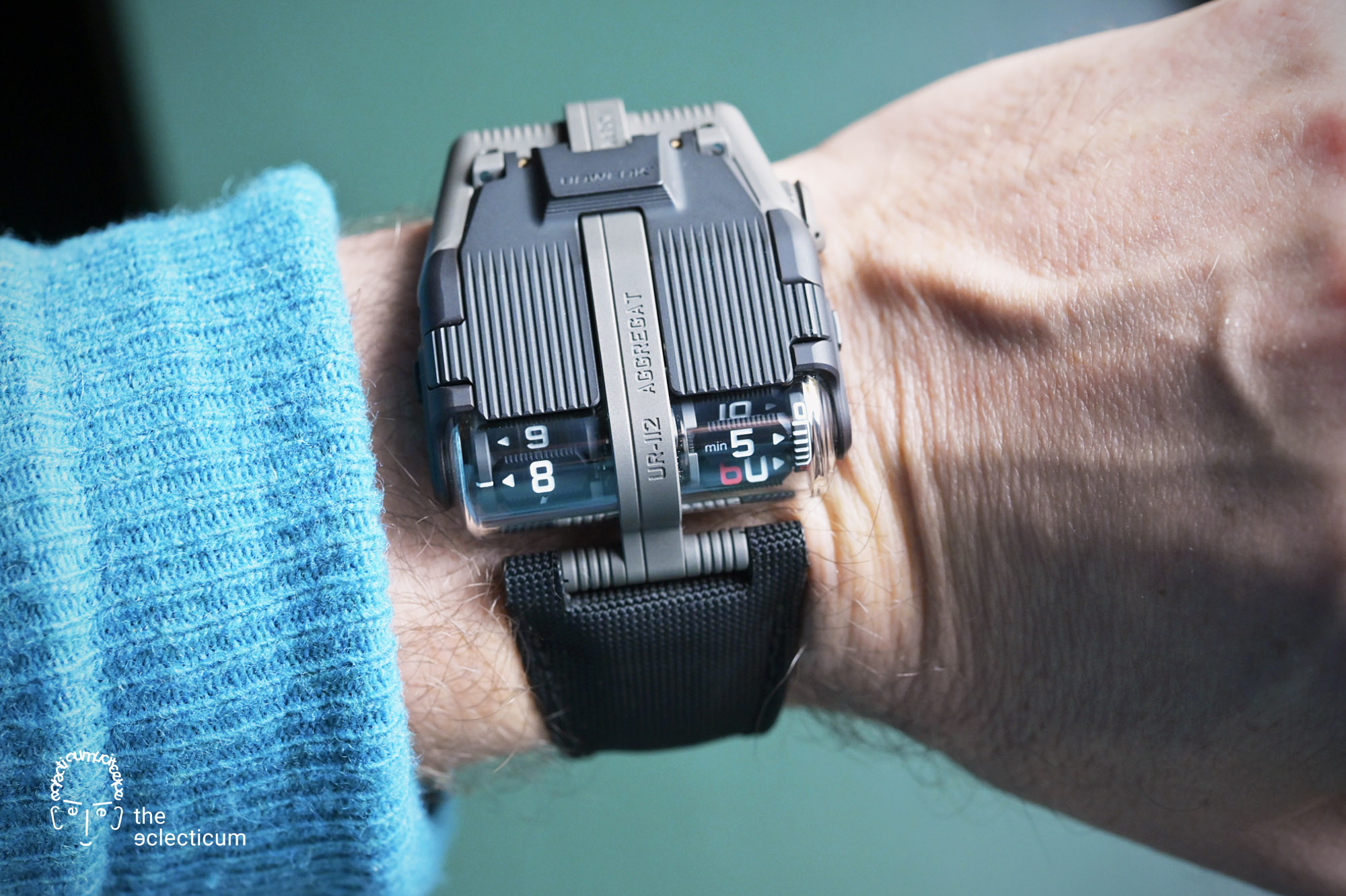 Take a close look at the display: there are two satellites rotating on vertical axes left and right of the central movement, indication, to the left, the (jumping) hours indication, to the right, a continuous minute display. Both are of ingenious construction: using 4 triangular satellite elements, thus 12 different pieces of information can be shown: 12 hours, or 12x 5 minutes.

Moreover, the respective time paddle is oriented in a perfect viewing angle for the viewer: 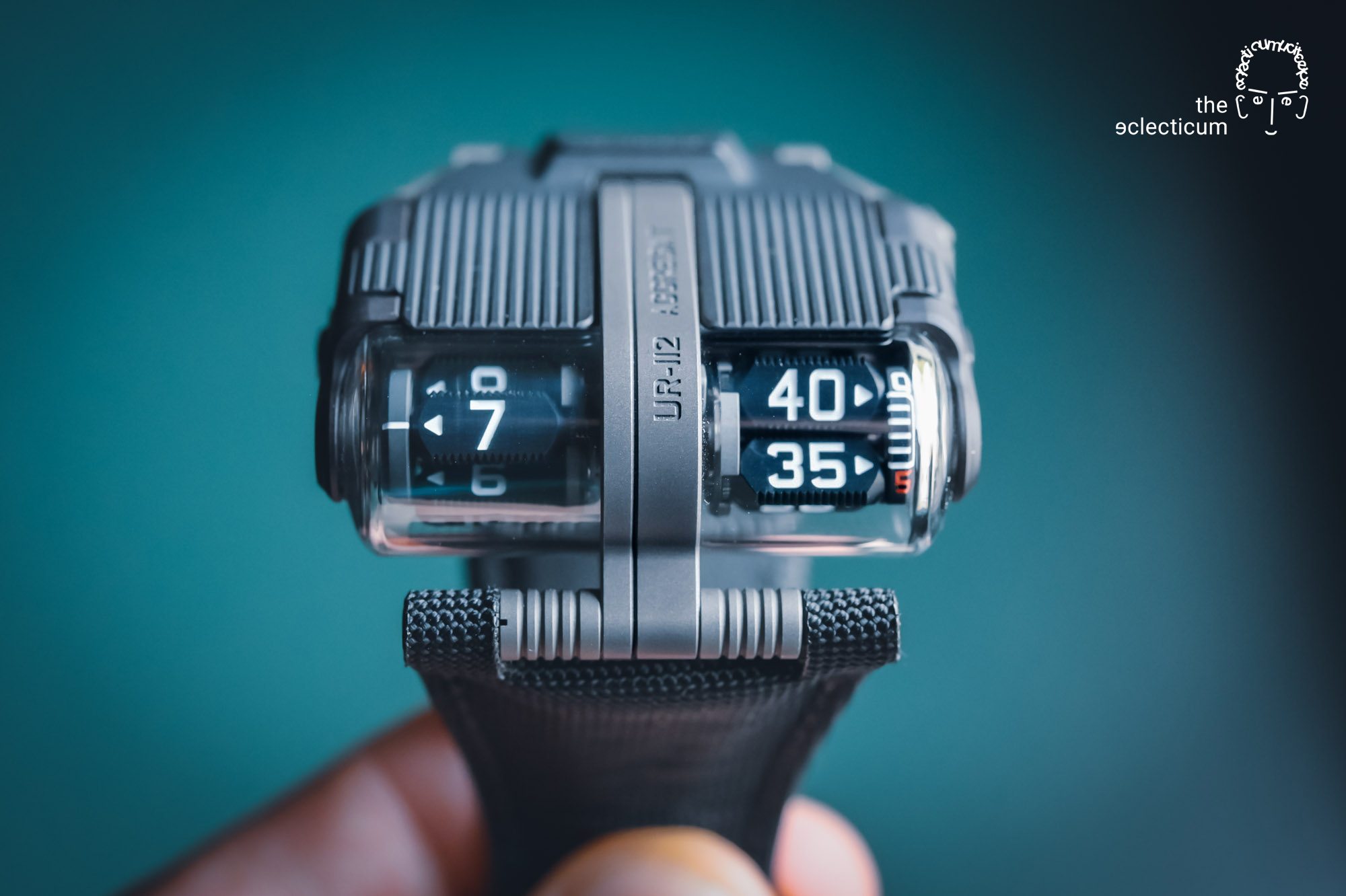 The time in the above image is 07:40 – you can either count 35+5 or 40+0 minutes… The angle of the respective active surface changes from steep (‘40’ in the right minute display) over perpendicular (‘7’ in the left hour counter) to a flat angle (‘35’ in the right display again) in respect to the viewer as the satellites traverse their path. On the minute scale, the interim values between the 5-er instances are indicated by arrow as the satellite moves.

How’s that possible? To understand this we need to go back in technical history, far, far back, to the mechanical principle of epicyclic (or planetary) gears…

Sidenote – epicyclic gears: It was in ancient Greece, some 2500 years ago, where the idea of ‘epicycles’, i.e., circles travelling on the circular orbits, was born and then used to describe the orbital paths of planets. Most famously, the Antikythera Mechanism, circa 80 BC, used epicyclical gears to mechanically calculate the elliptic orbit of the moon around earth. 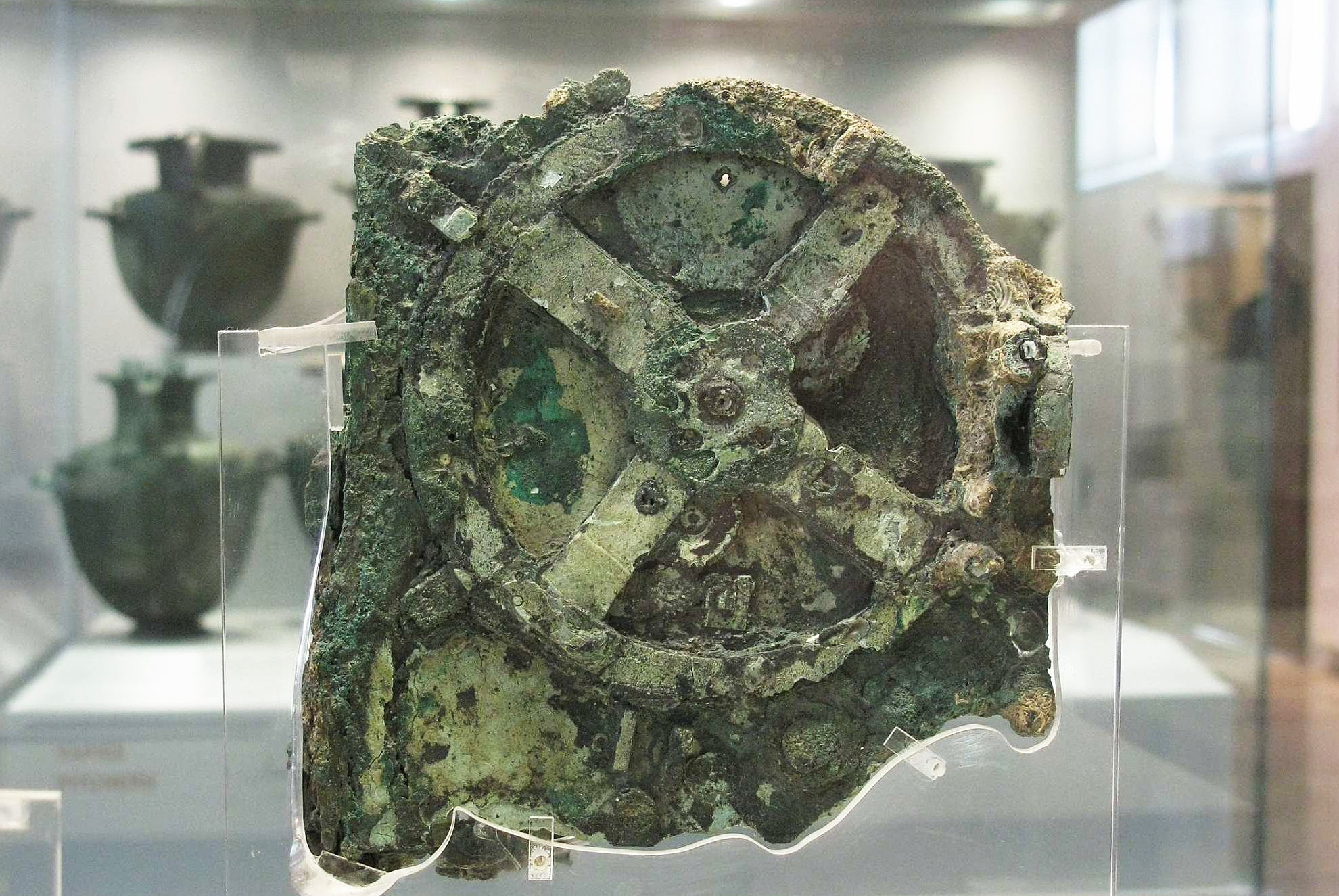 (The Antikythera Mechanism at the National Archaeological Museum in Athens, Greece. Image © Tilemahos Efthimiadis) Epicyclic gearings, also known as planetary gearings, are gearings where the centre of one gear (planet gear) revolves around the centre of the other (sun gear), held in place by a carrier and a circumference ring gear with internal teeth. Any of the above elements can be either rotating or fixed, which then gives specific functions to the epicycle gear train, e.g., achieving different rotational speeds or reversal of direction. 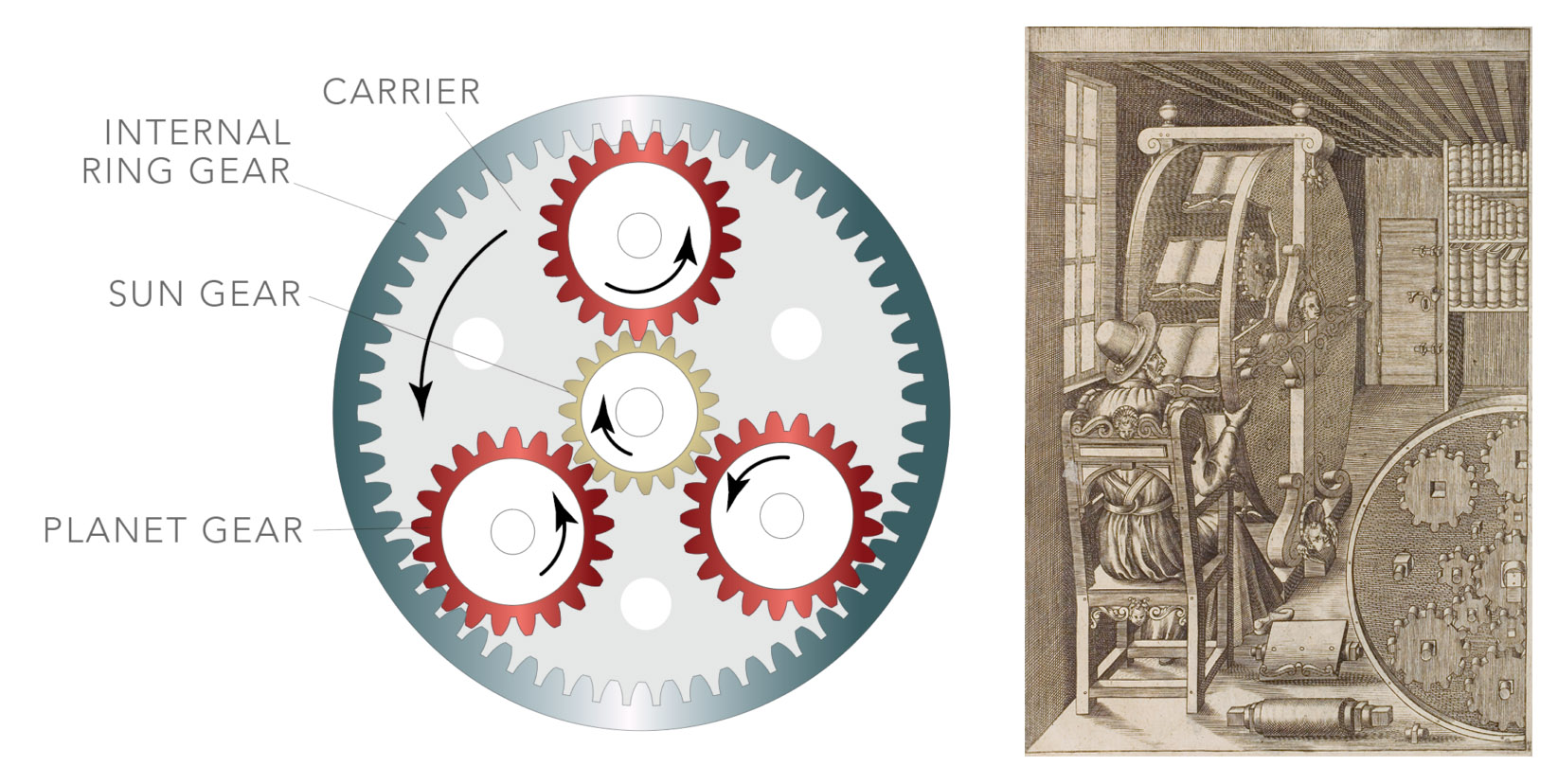 (Scheme of an epicycle gear train (left); a bookwheel as invented in 1588 by Italian military engineer Agostino Ramelli (right). Images © motioncontroltips and Wikipedia, respectively) Epicyclic gear trains have been used countless times in mechanics, particularly in the automotive industry (gearboxes). One very apt application is the bookwheel invented by Agostino Ramelli, an Italian military engineer, who in 1588 designed a vertically rotating book stand that would present a desired book always in the proper orientation of the reader.

In essence, the UR-112 Aggregat does exactly what Ramelli’s bookwheel does; it presents time (not books…) on two satellites rotating on vertical axes using planetary gears such that the respective time paddle is oriented in a convenient angle for the viewer.

That’s mesmerising, and best appreciated in a short video:

To understand the construction better let’s take a look at the movement: 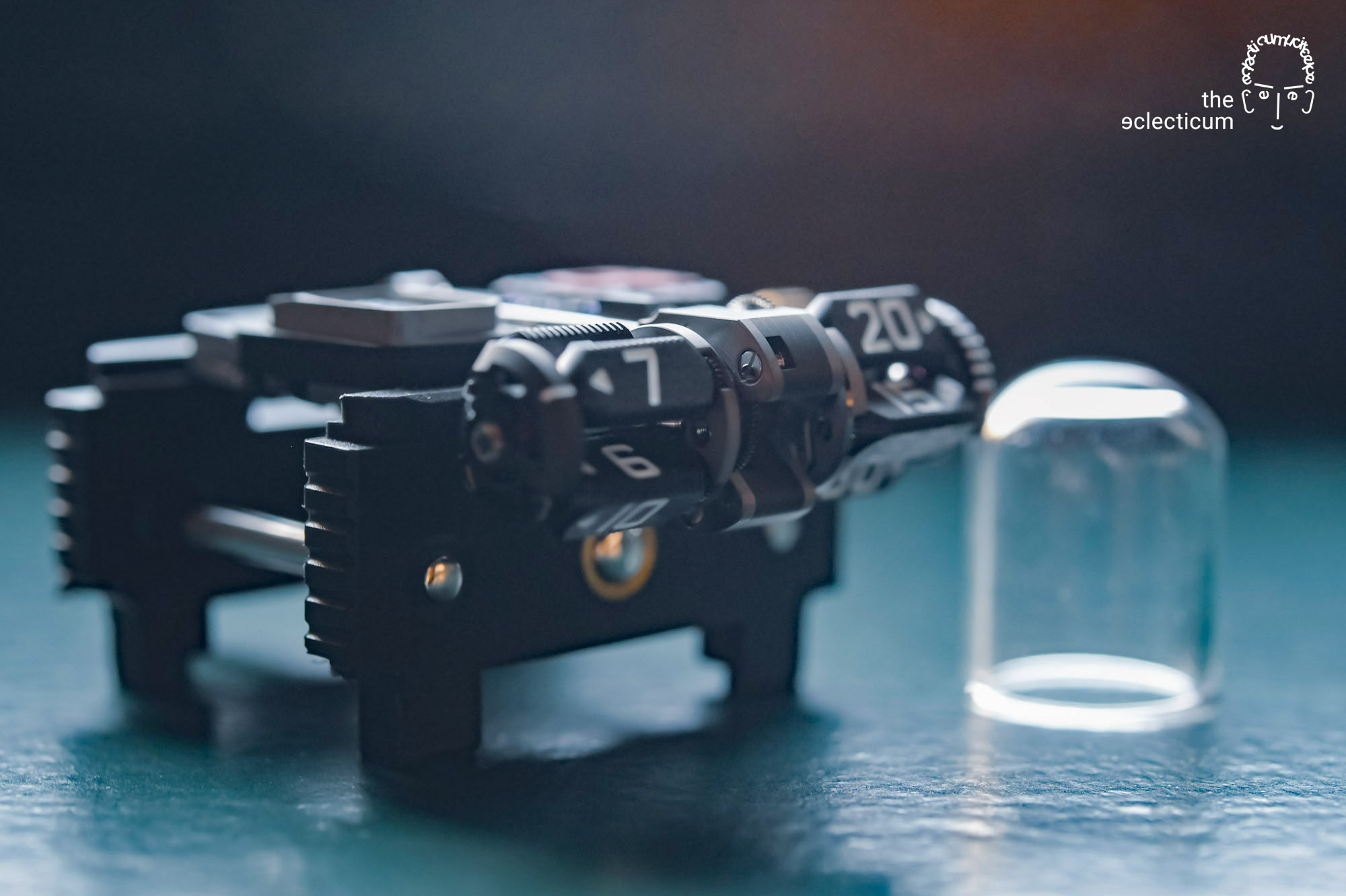 You’ll note the clear separation between power delivery, the base movement (on a Vaucher Seed VMF 3000 base), and time display. Both elements are connected by a large, traversing power axis with 90° bevel gears, which is the ‘functional’ justification for the case’s ‘spine’: 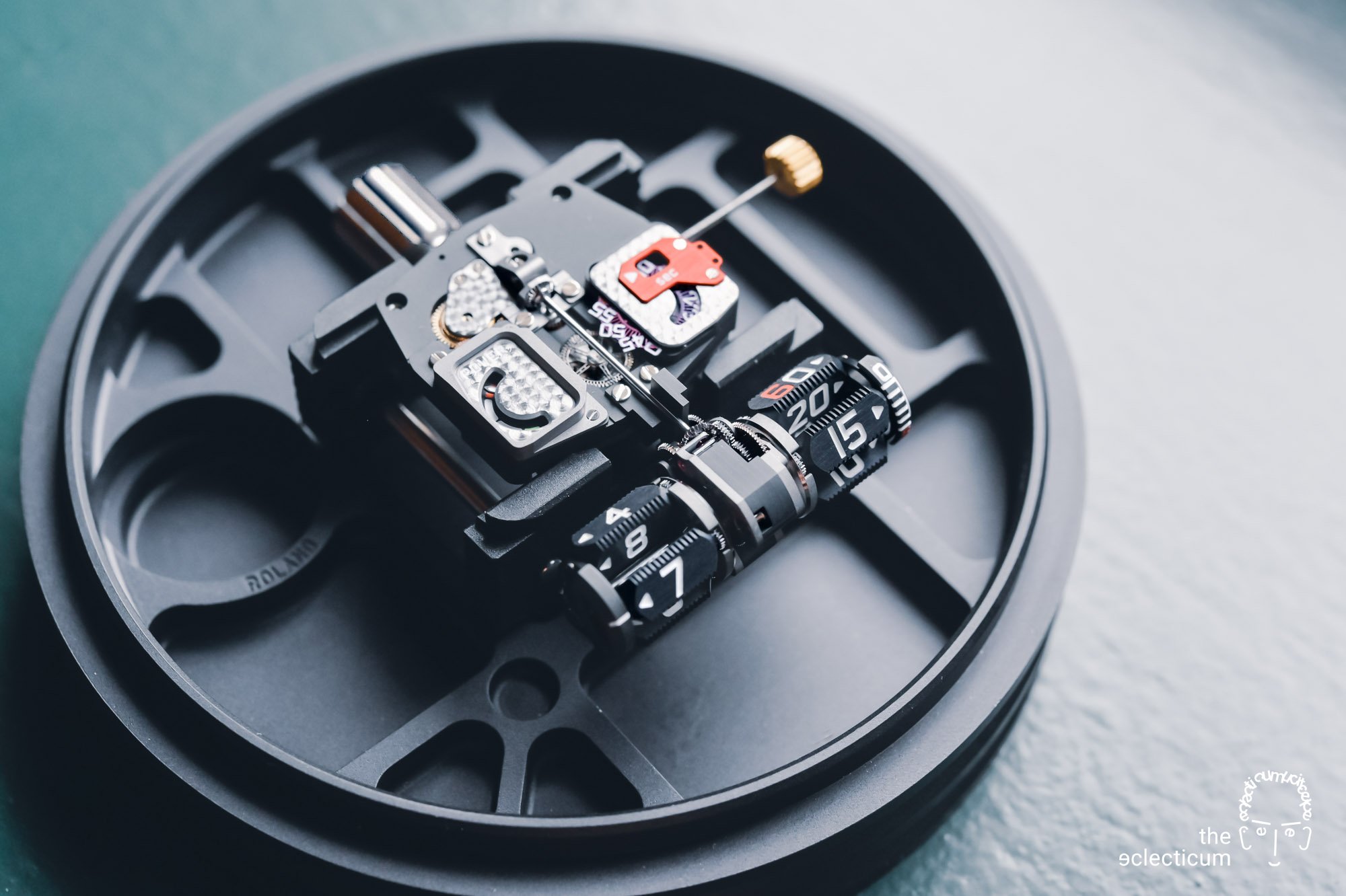 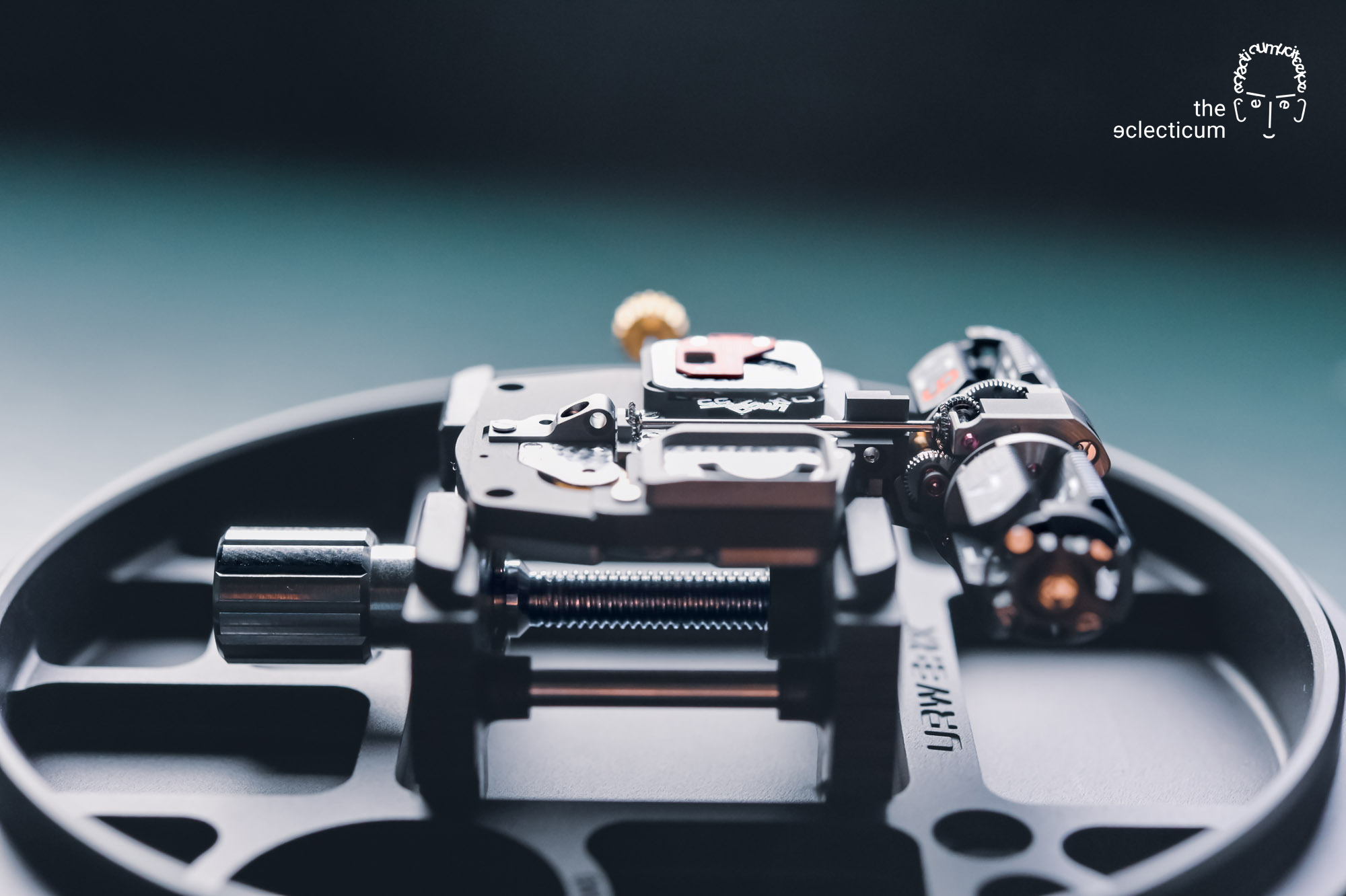 (Side view of movement) 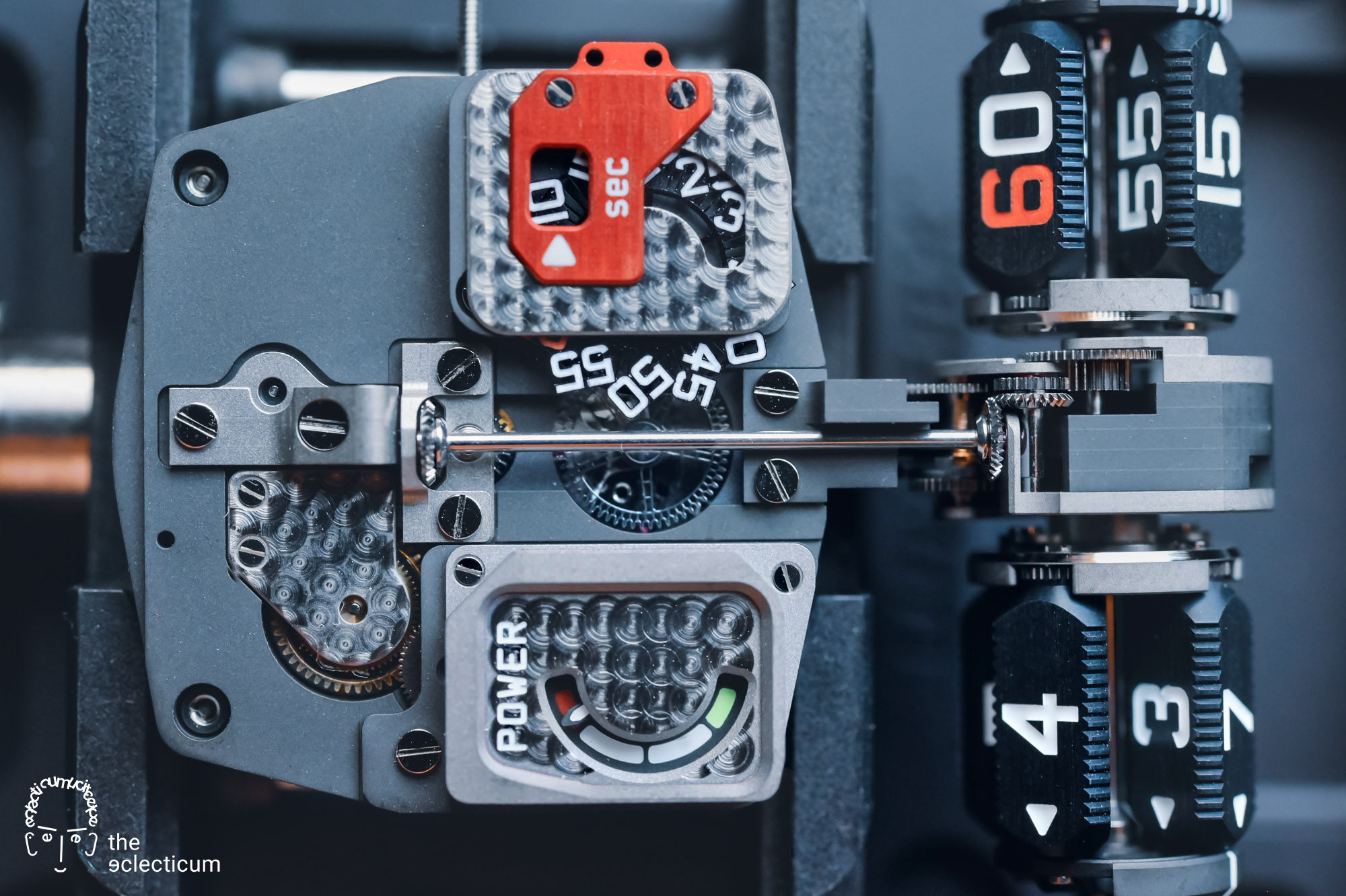 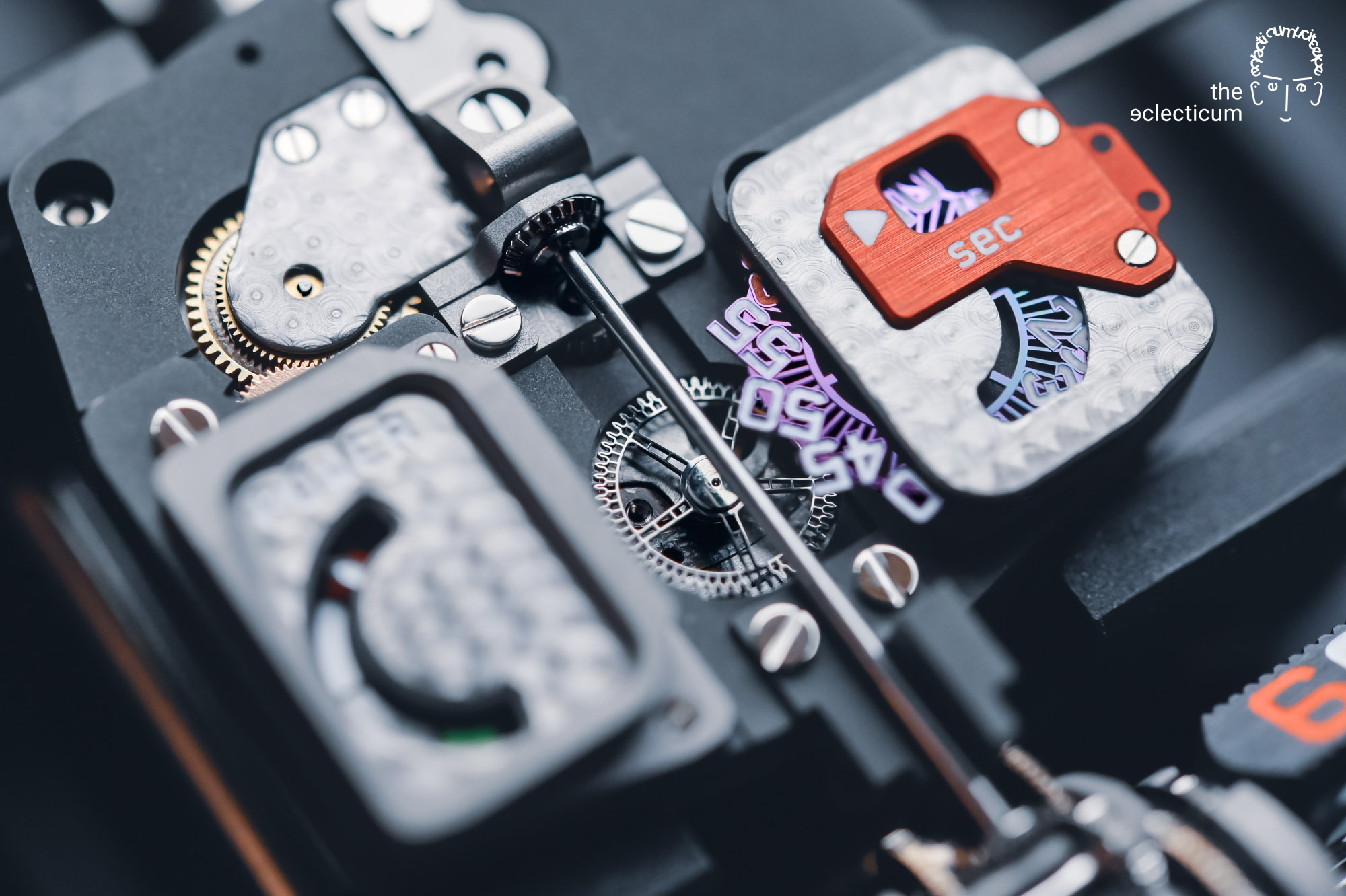 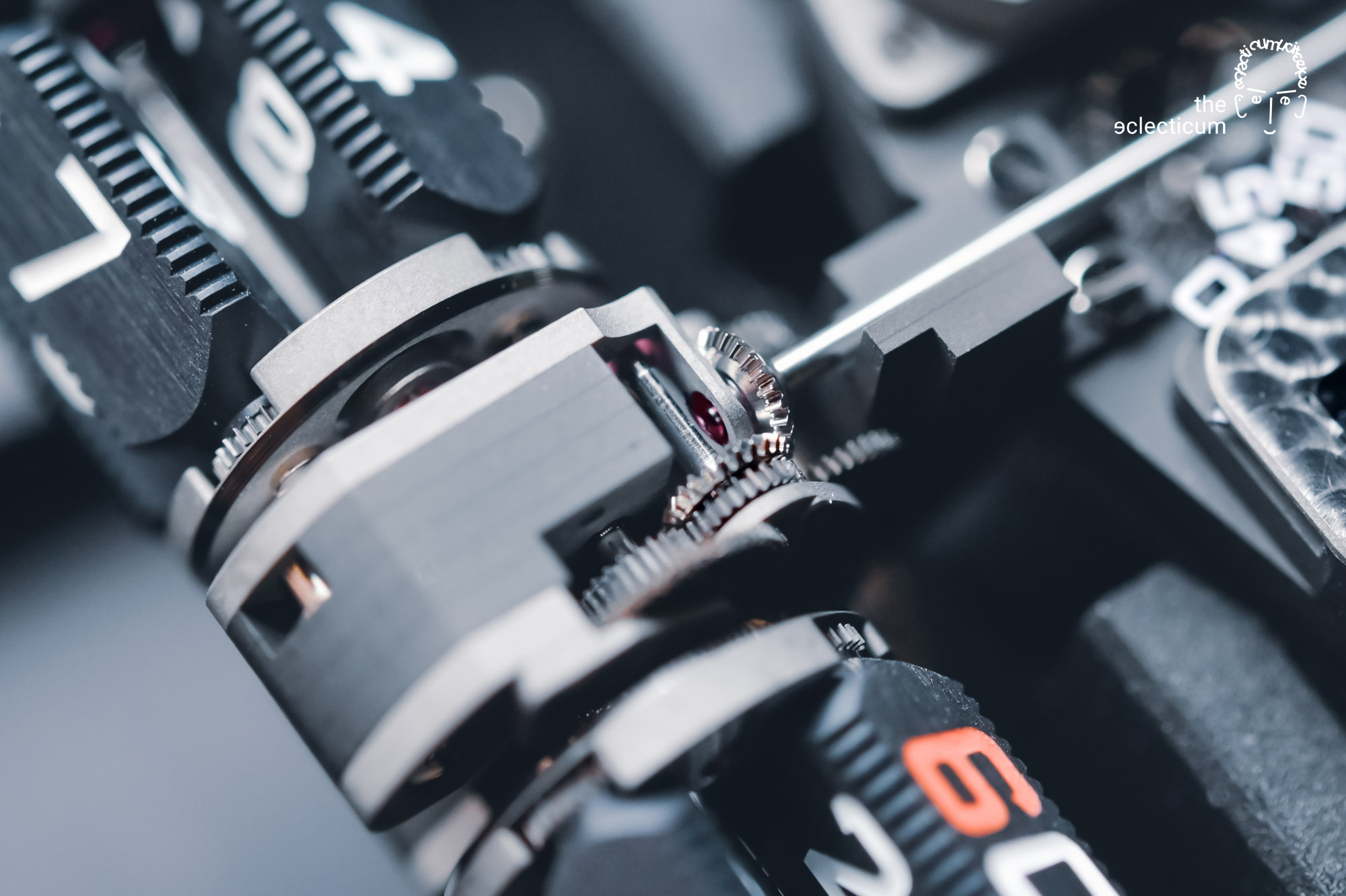 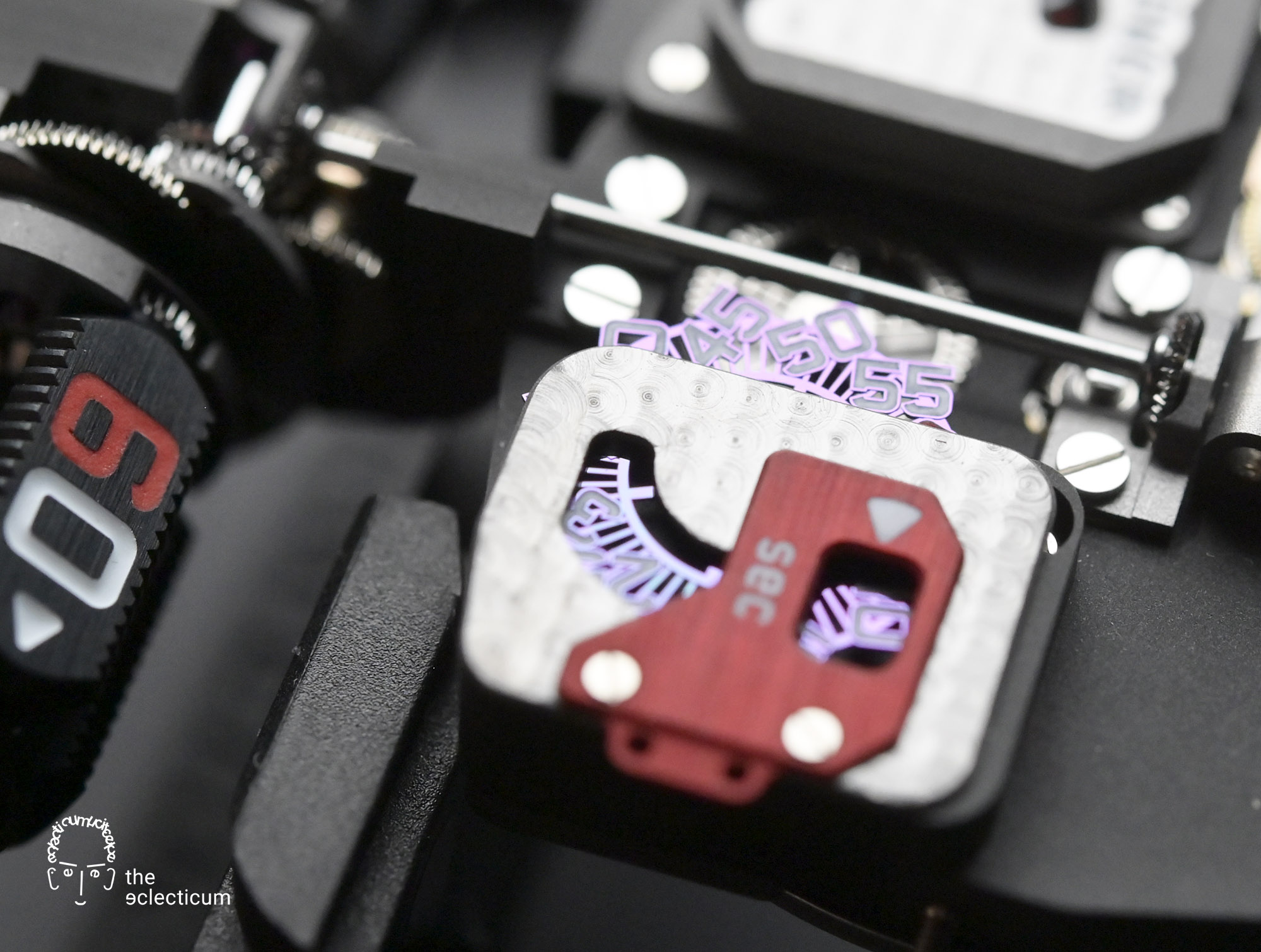 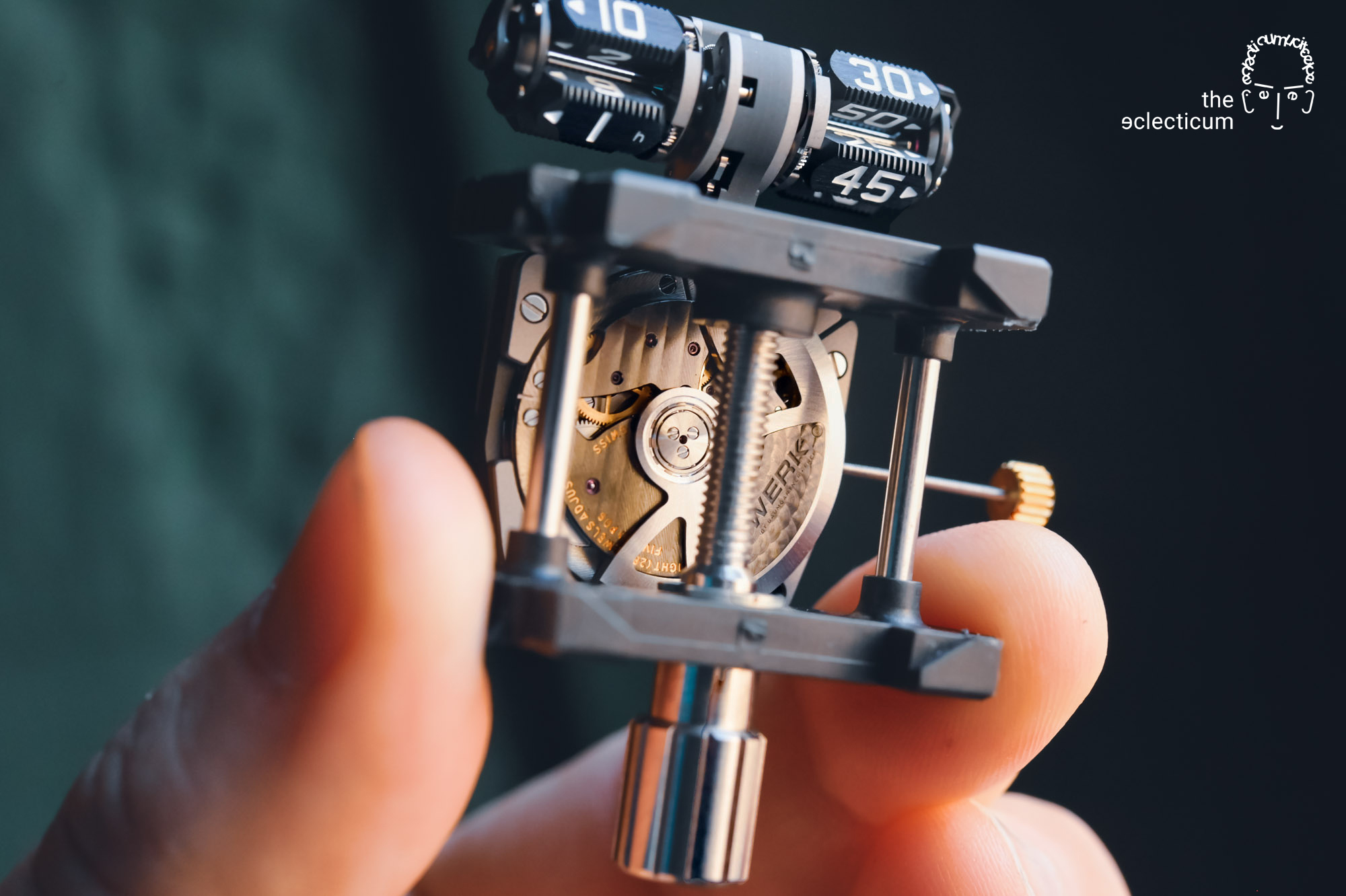 (Vaucher base movement) The satellite module displays the time in a semi-instantaneous way: the minutes always pass smoothly, yet when the ‘60’ paddle passes on the right satellite, hour jumps to the next paddle on the left one – a view to behold! Most of its ‘goodies’ are hidden under wraps, but it still is impressive to look at and one can gauge how delicate its energy flows must be to balance: 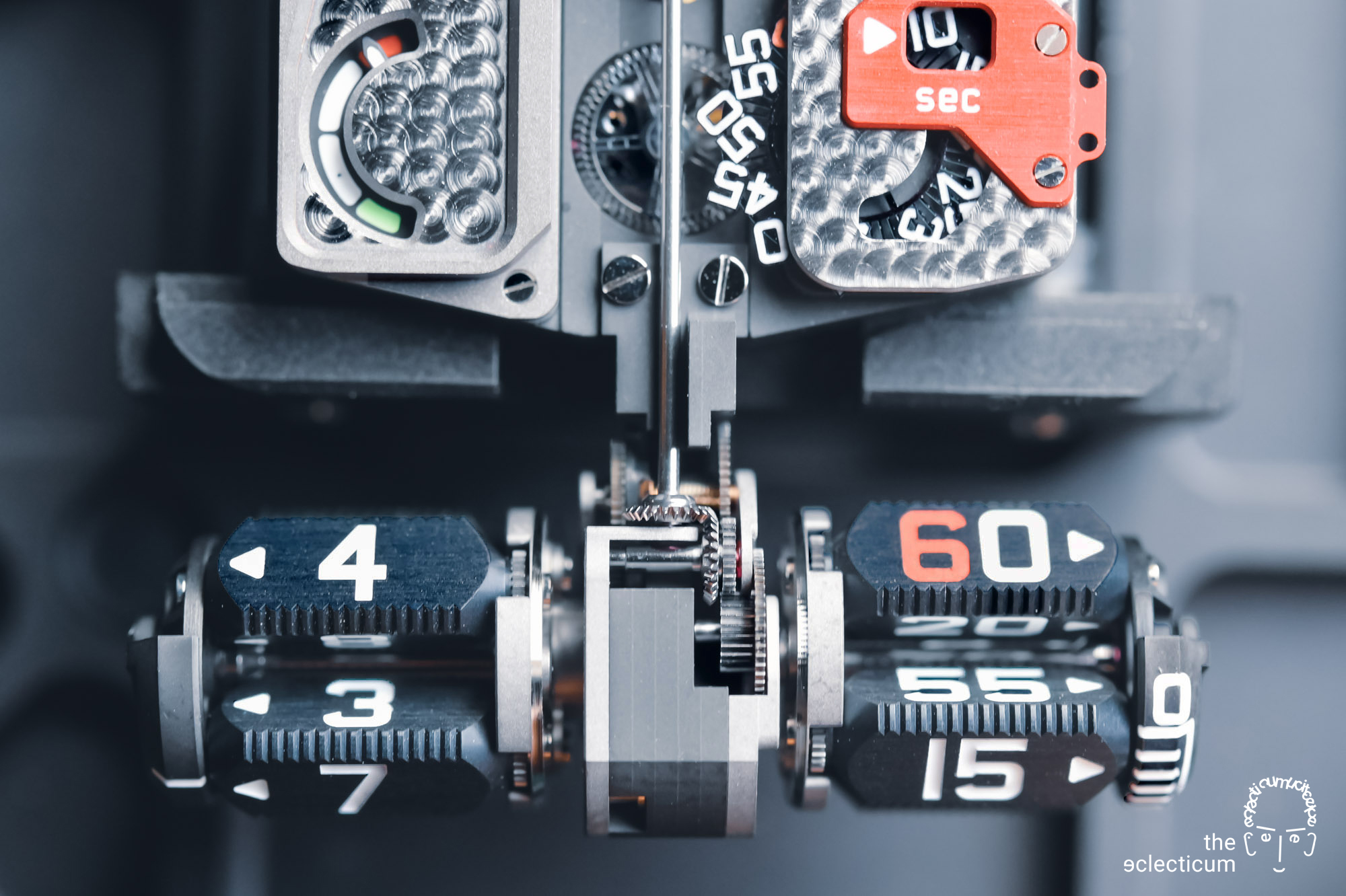 (Top view of the transmission axle and the satellite module) 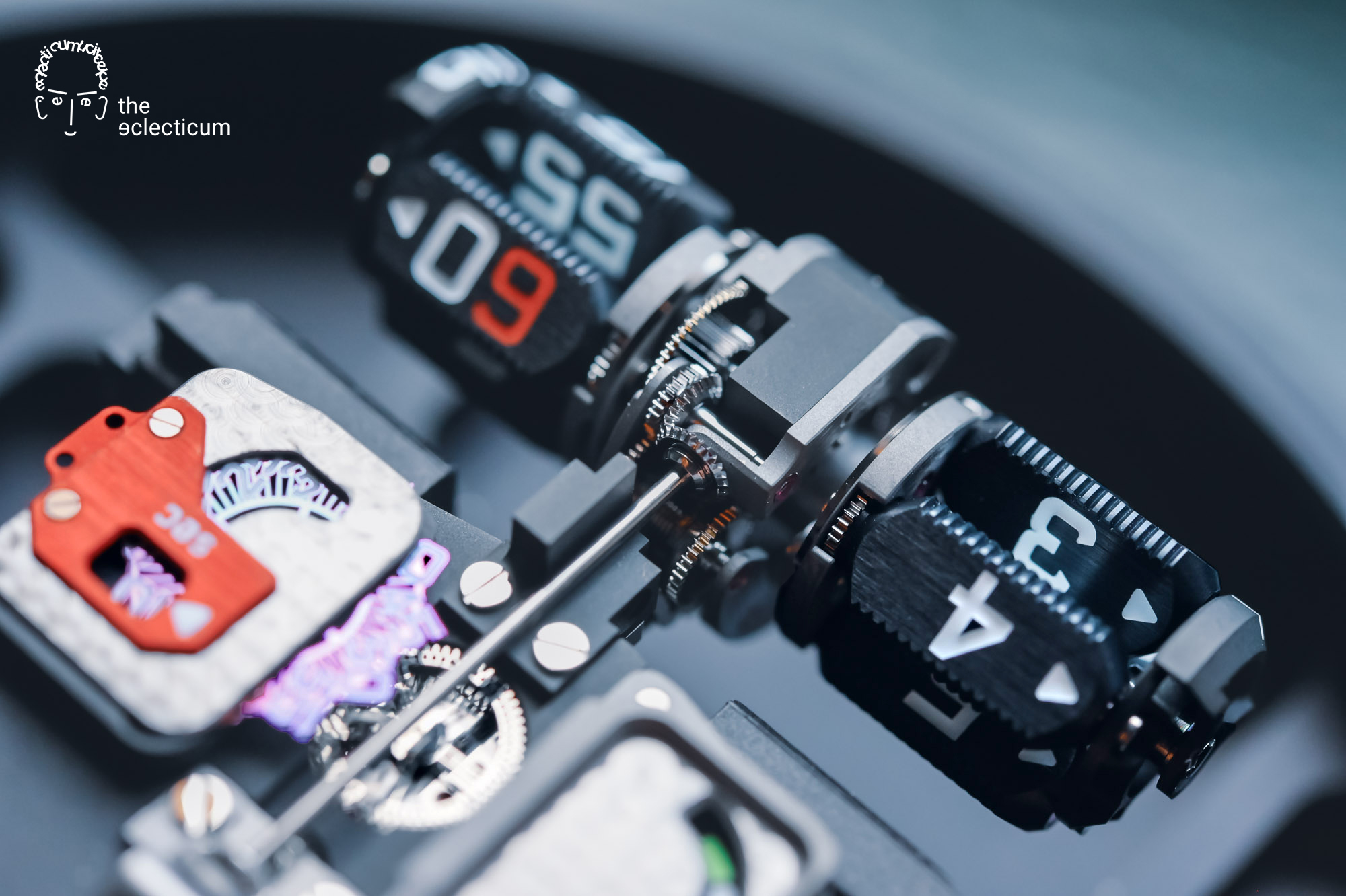 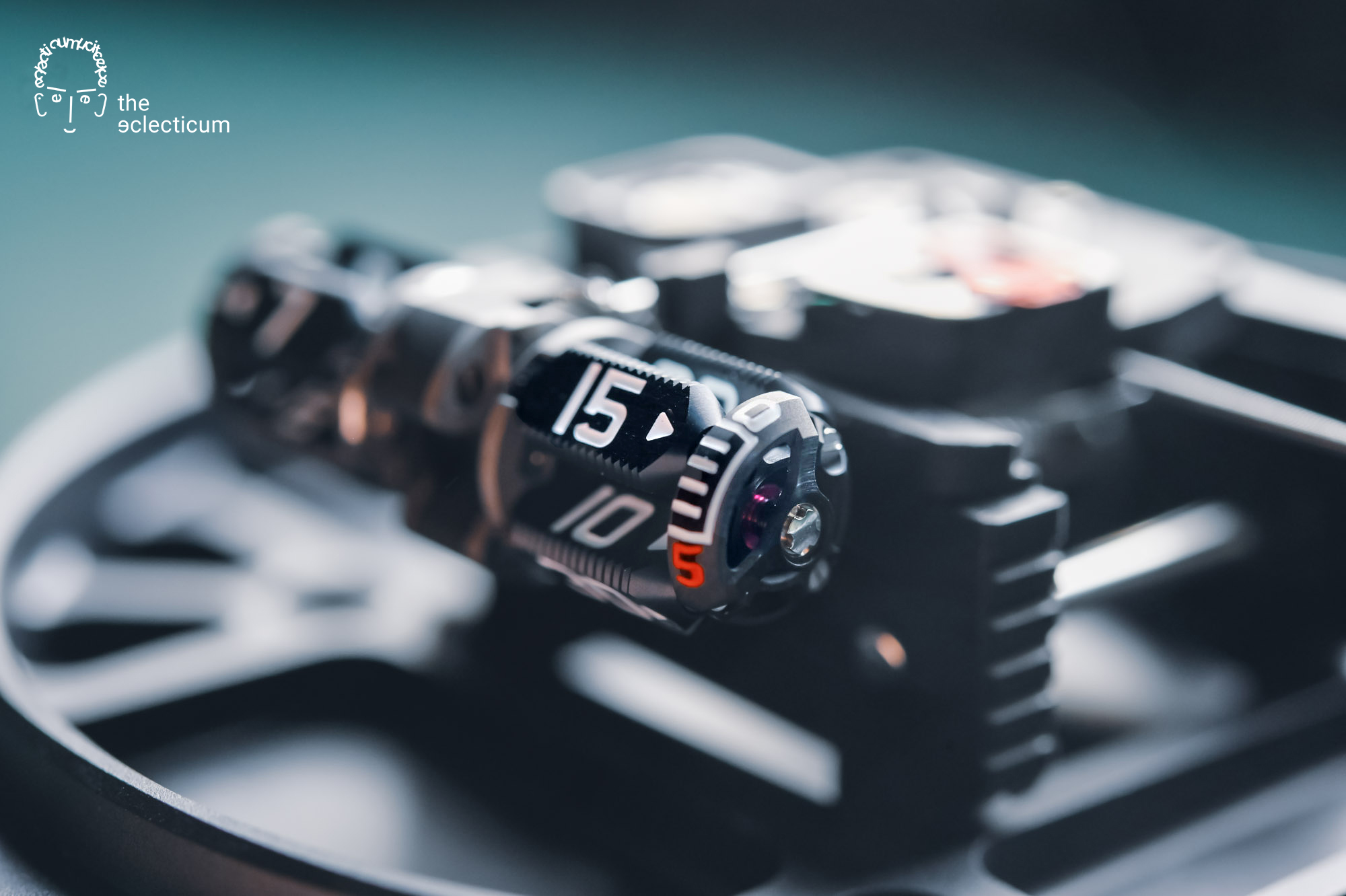 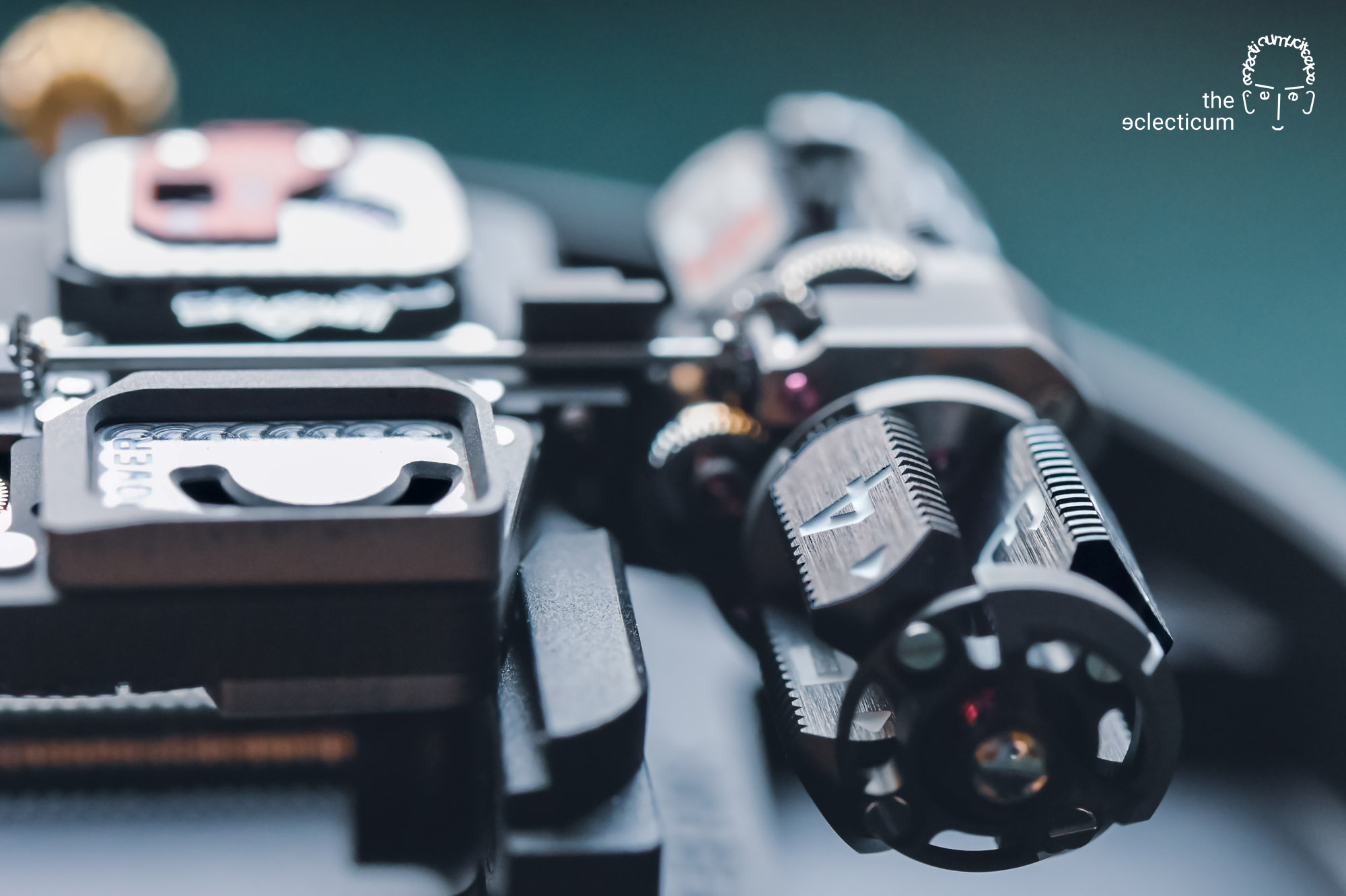 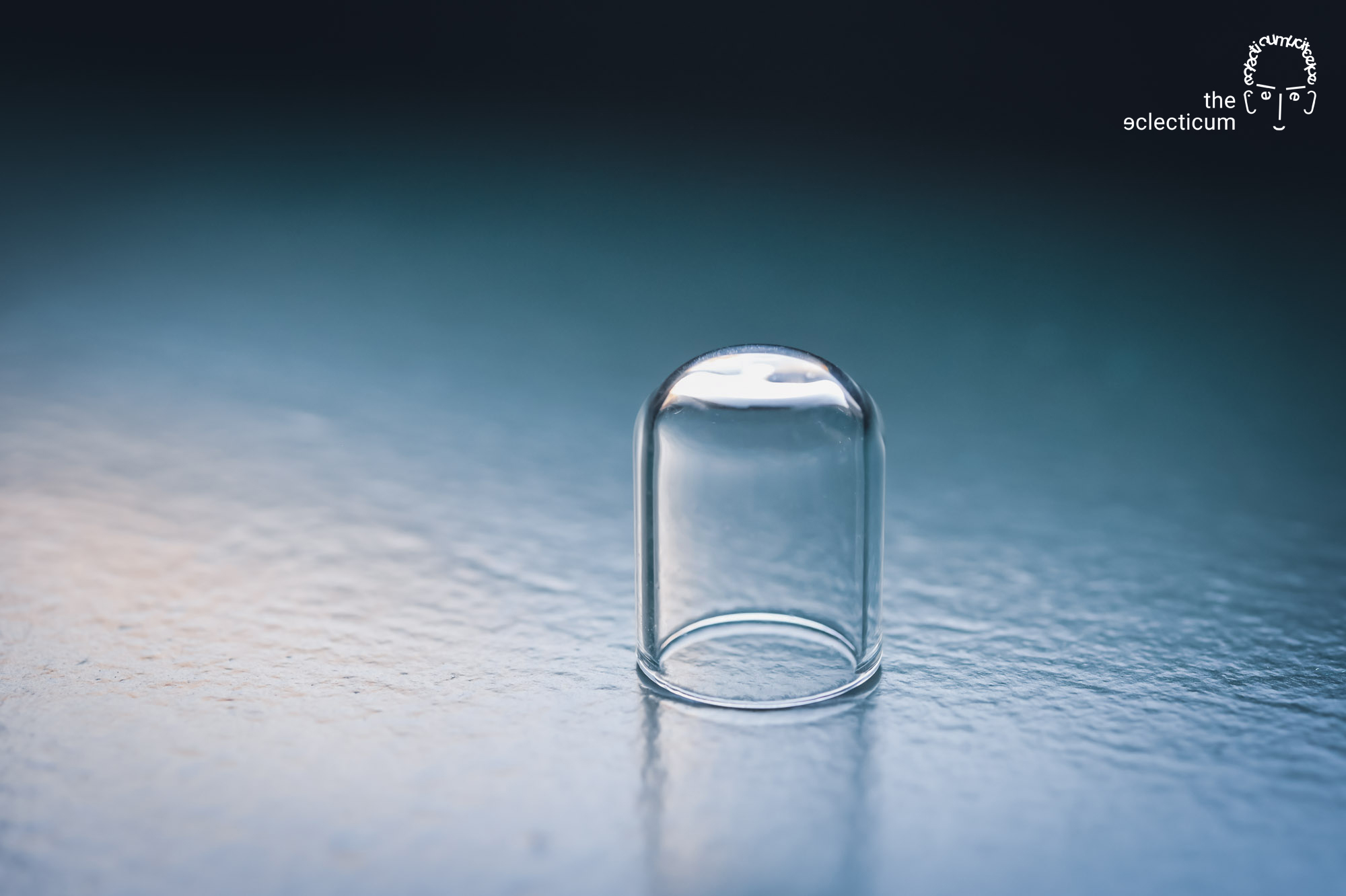 (Sapphire cones for the satellites)

To begin with, we’re used to mind-blowing mechanics from Urwerk. We’re also used to the continuous development and advancement the Geneva and Zurich based atelier affords to its creations. The UR-112 Aggregat is one of the latter, and in our view, it deserves extended quality time. 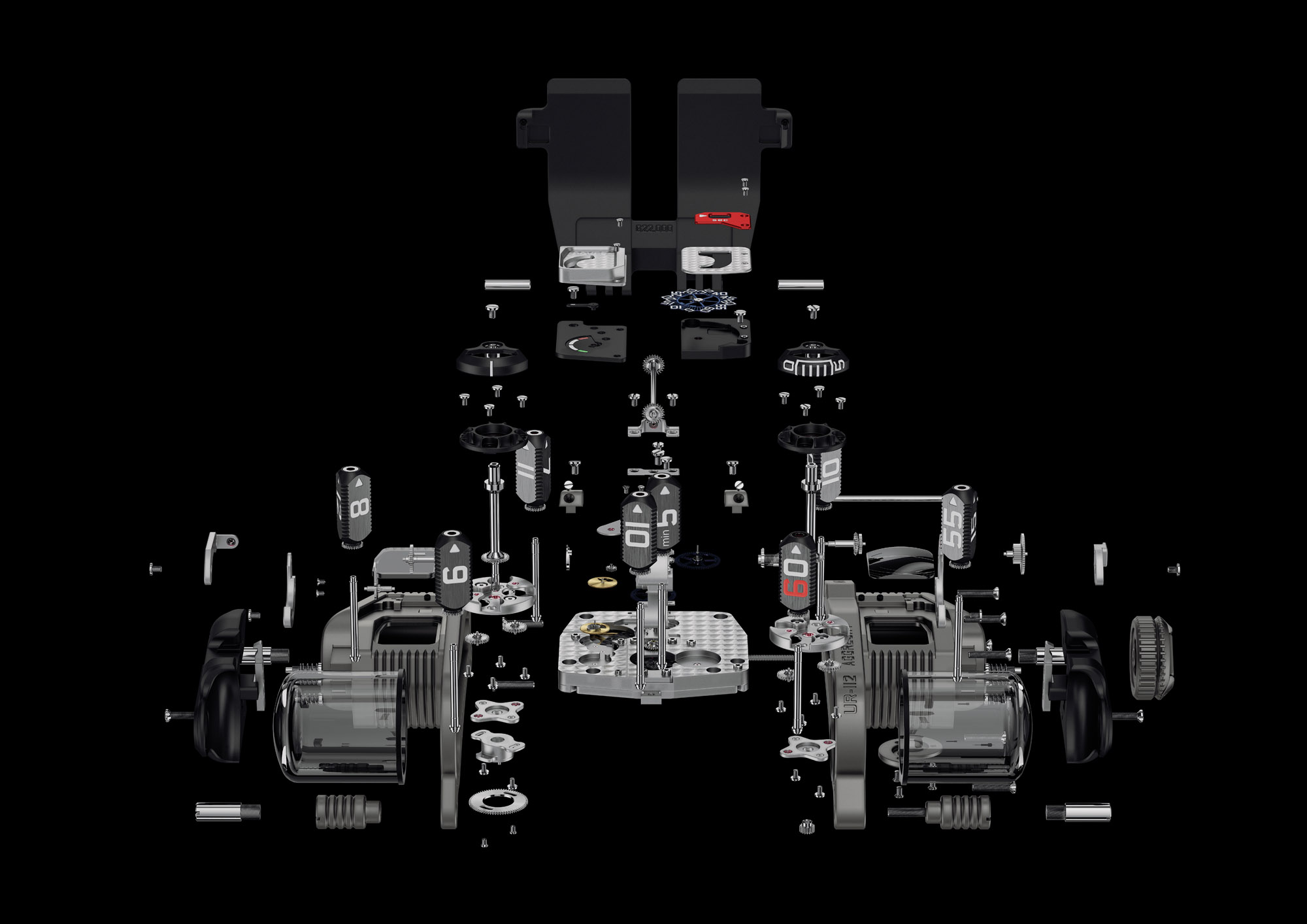 (Urwerk UR-112 Aggregate exploded view, image © Urwerk) Consider a few years back when retrograde indications were up and coming. An apparently simple complication, smooth power charging and then a sudden release, which still caused many brands – small and big alike – a lot of headaches, development costs and after-sales service issues.

With that in mind the jumping indicators Urwerk so frequently produces are even more impressive, as full satellites, arms or belts jump – all of which imply a considerably more complex balancing of forces than a ‘simple’ hand. We don’t exactly know how well Urwerk masters this engineering task, but let’s consider the planetary satellites of the UR-112 a declaration of confidence! 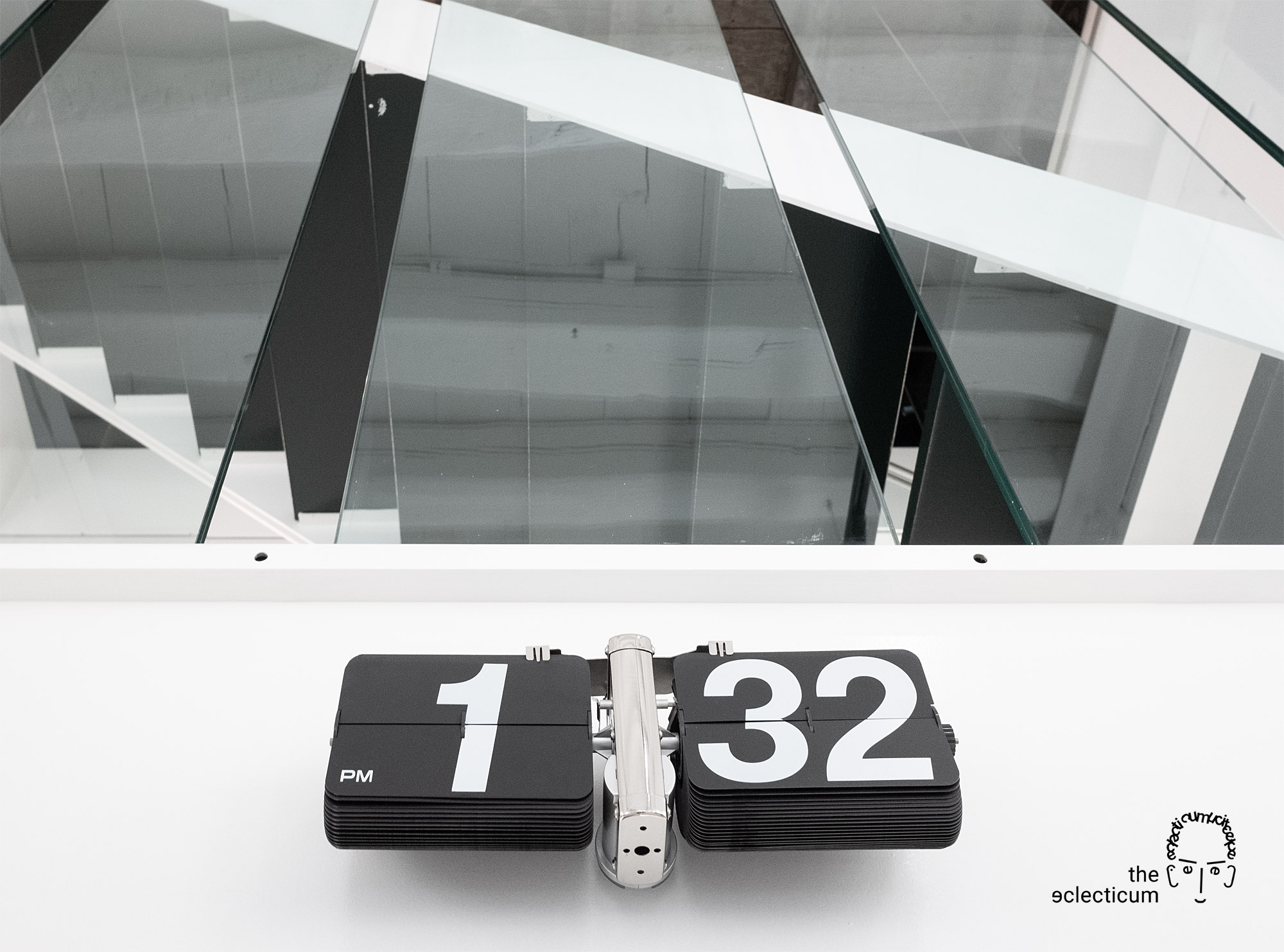 (Flipping wall clock in Urwerk’s Geneva ateliers) This just got to another level with the UR-112 Aggregat, although at passing view it seems ‘just’ like a new version of the UR-111 that takes cues from the flipping wall clocks we know since many years. But then, when have you first seen a ‘jumping planetary gear system’? 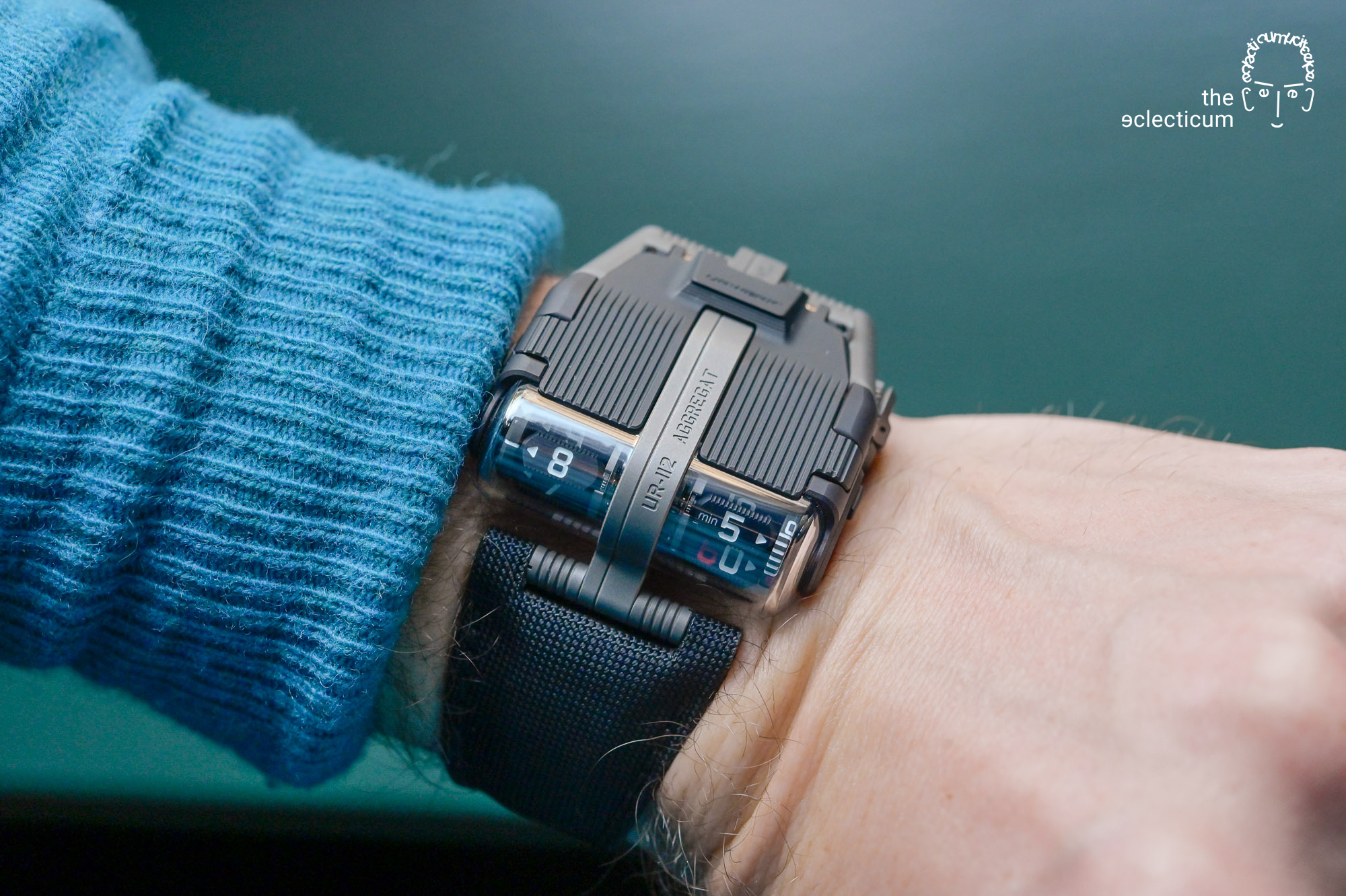 This is magnificent mechanical wizardry, which shall enchant the savvy collectors, and it will (if one can carry the price tag of a quarter-million CHF…).

We at ‘the eclecticum’ love the fact that mastery is so well ‘hidden’ like in this case!