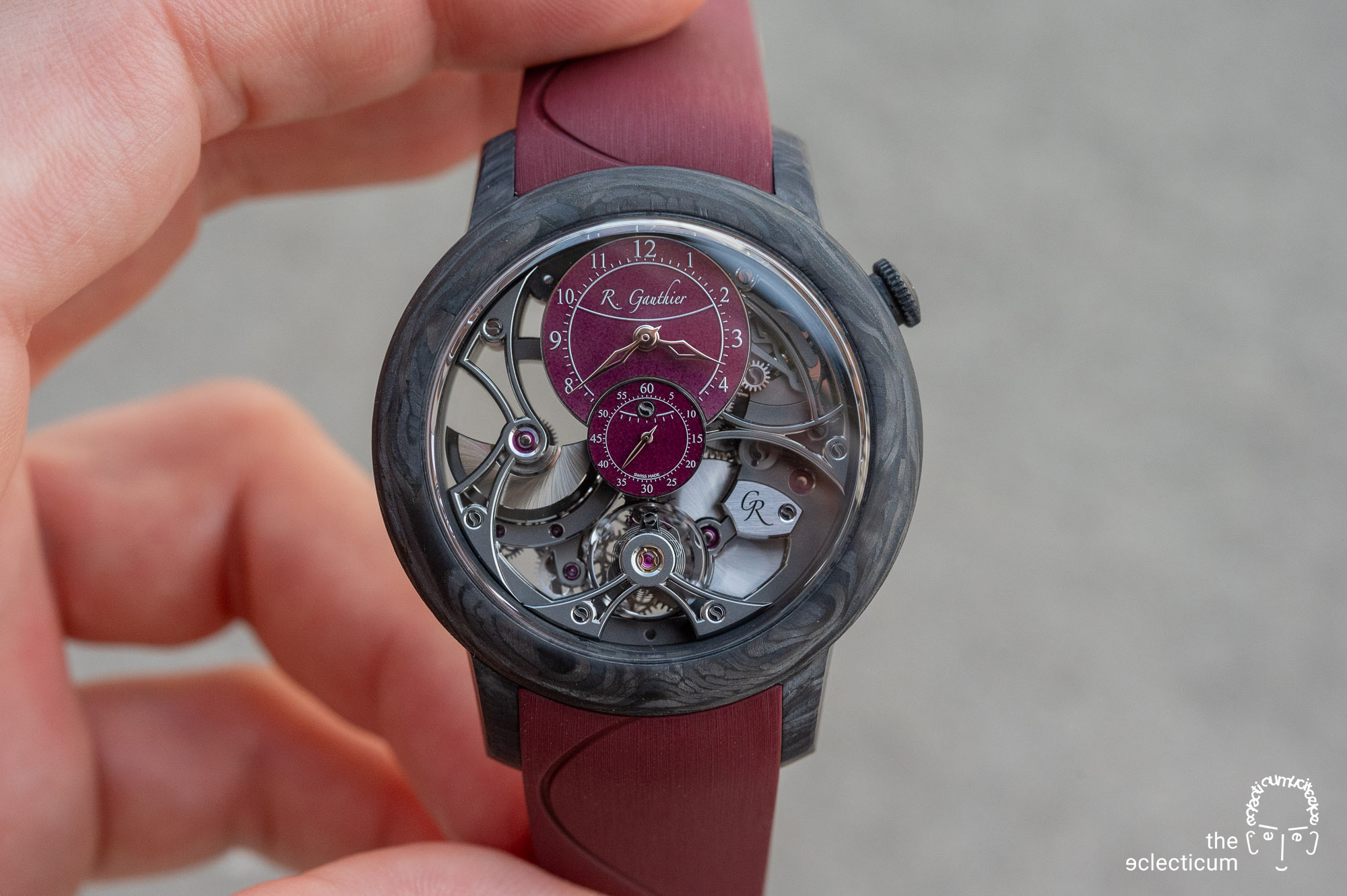 It dares to be different, came to our mind when a “blue version” of the Romain Gauthier Insight Micro-Rotor Squelette Manufacture-Only Carbonium® Edition was selected as a finalist for the ´Men’s` category at Grand Prix d´Horlogerie de Genève 2020. 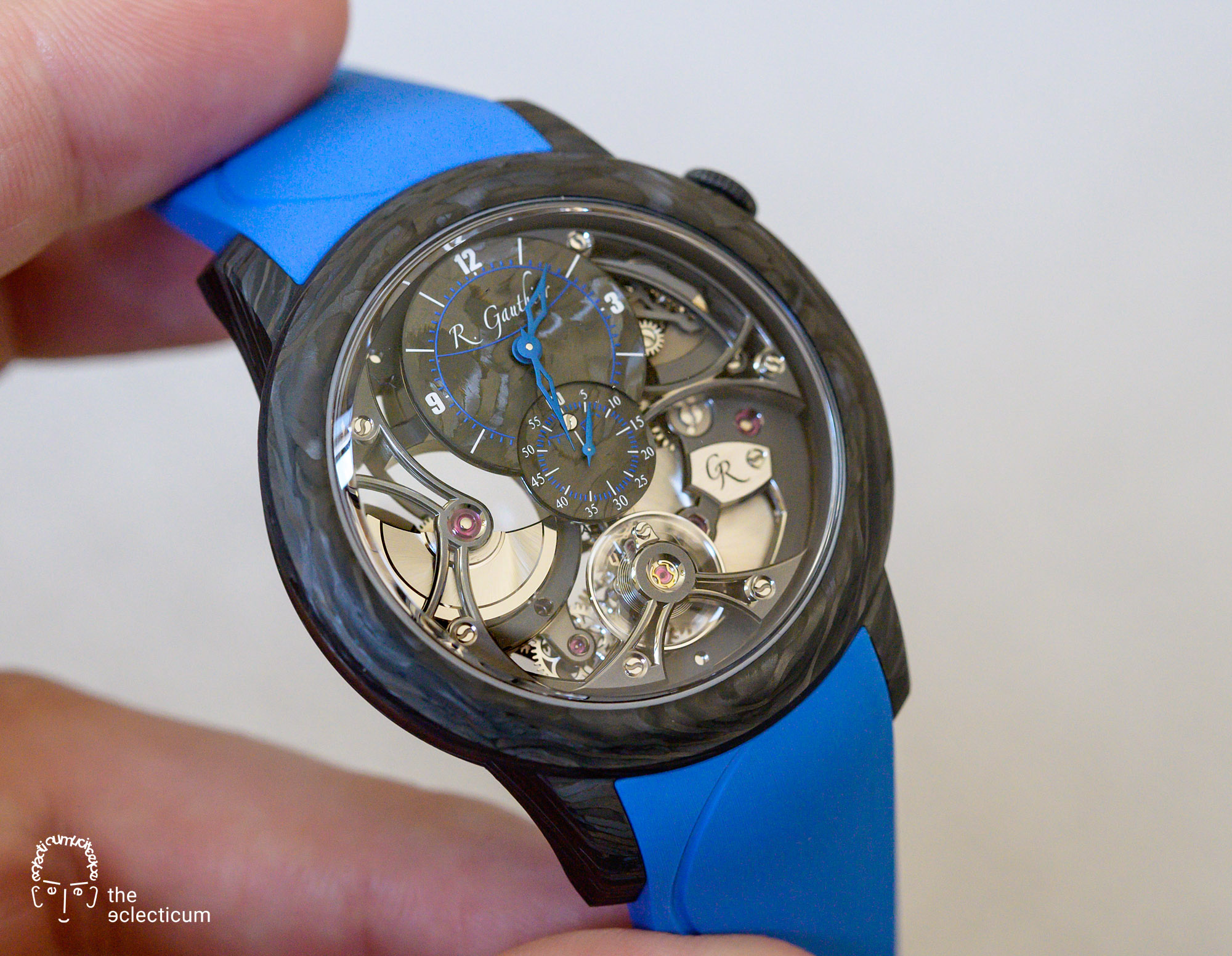 Fine watchmaking of today, another approach. Dress codes and lifestyles changed and so could classical watches as well. Let´s have a look, together.

Just recently we had the pleasure to handle a new version in “burgundy” and to be clear from the beginning, we liked it even more! 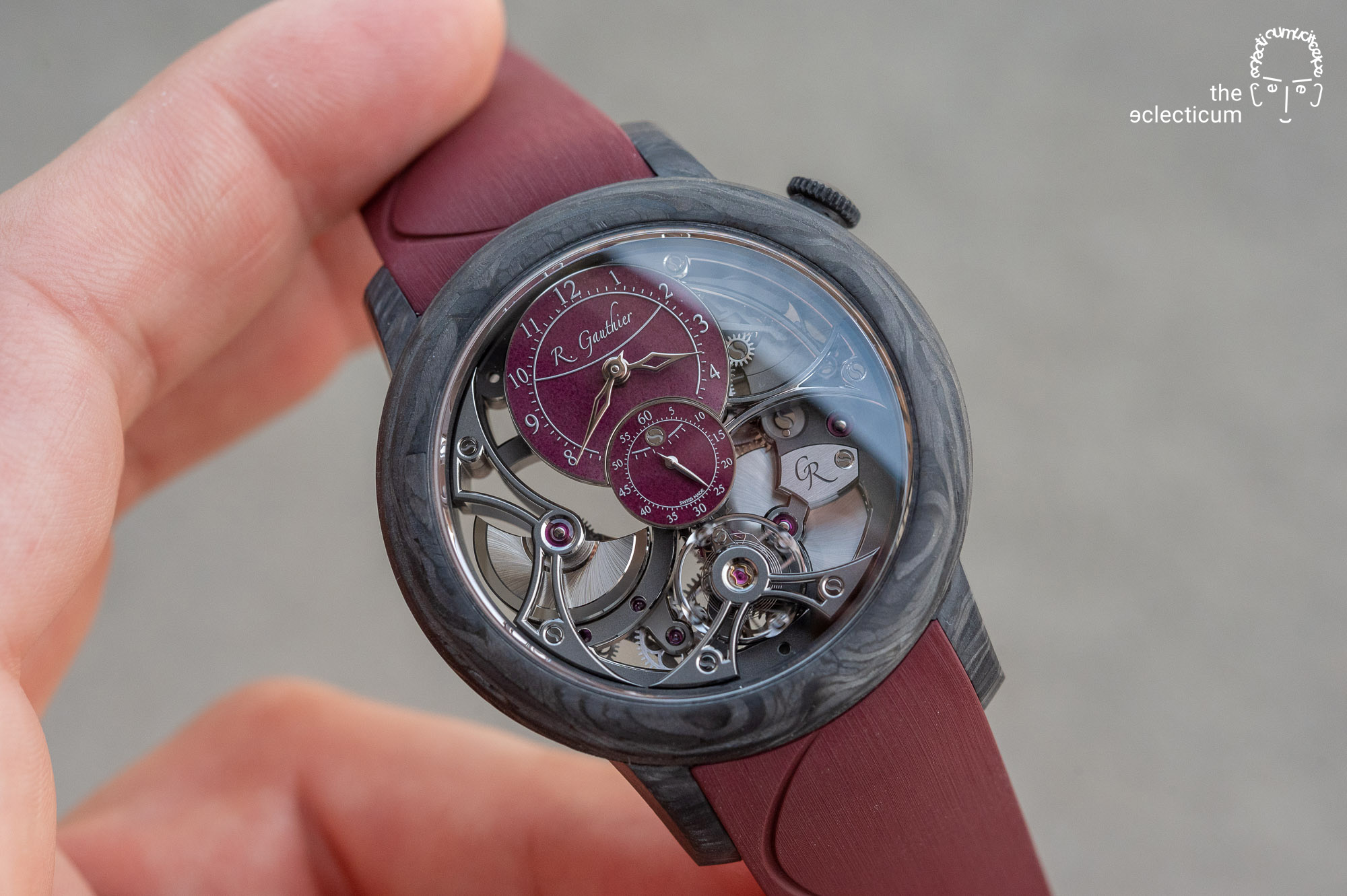 The case is once more made in Carbonium® (more on this later), but not the dial – not this time. The latter is perfectly executed in a more traditional way and brings lots of charm to the table. 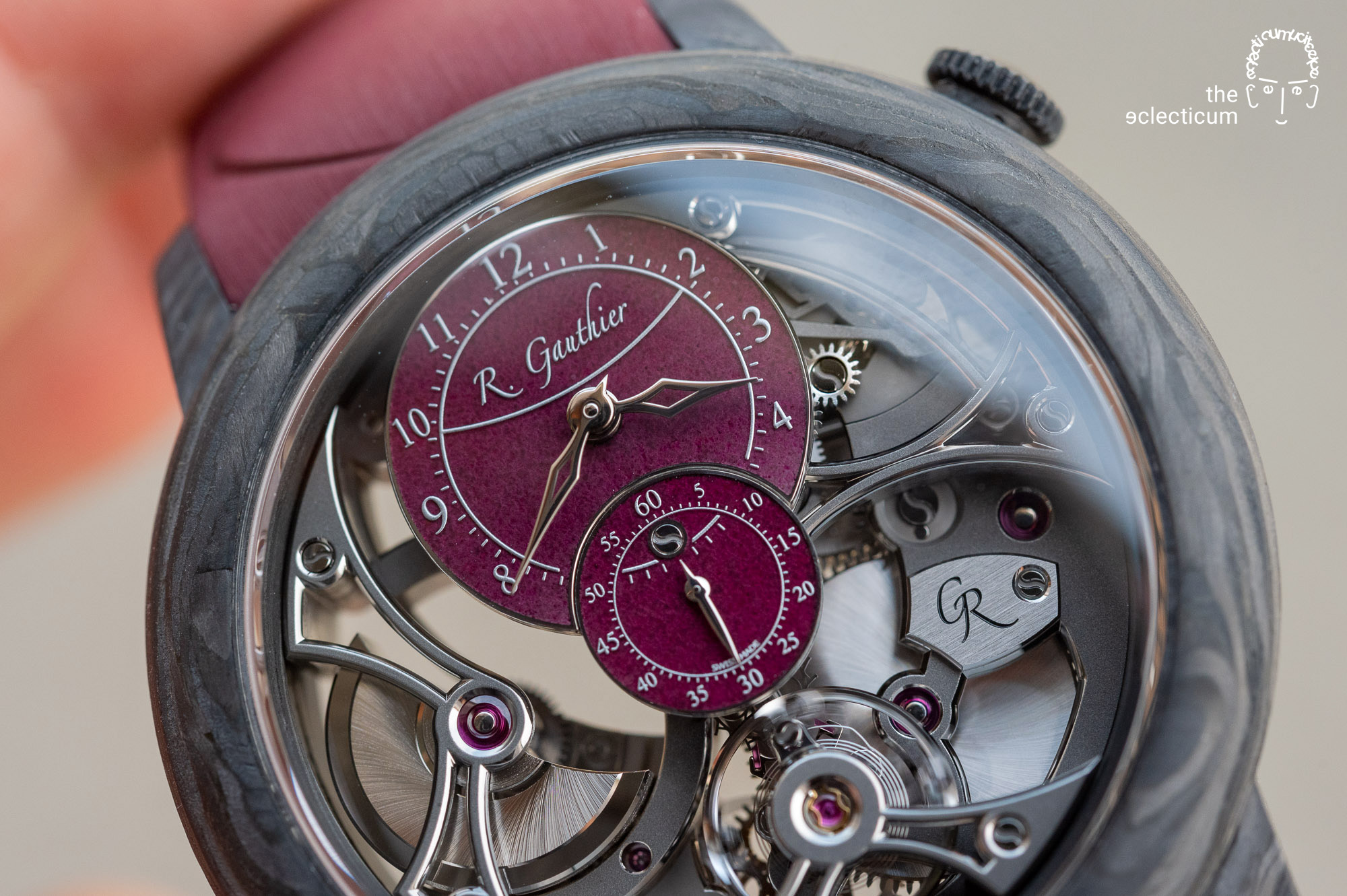 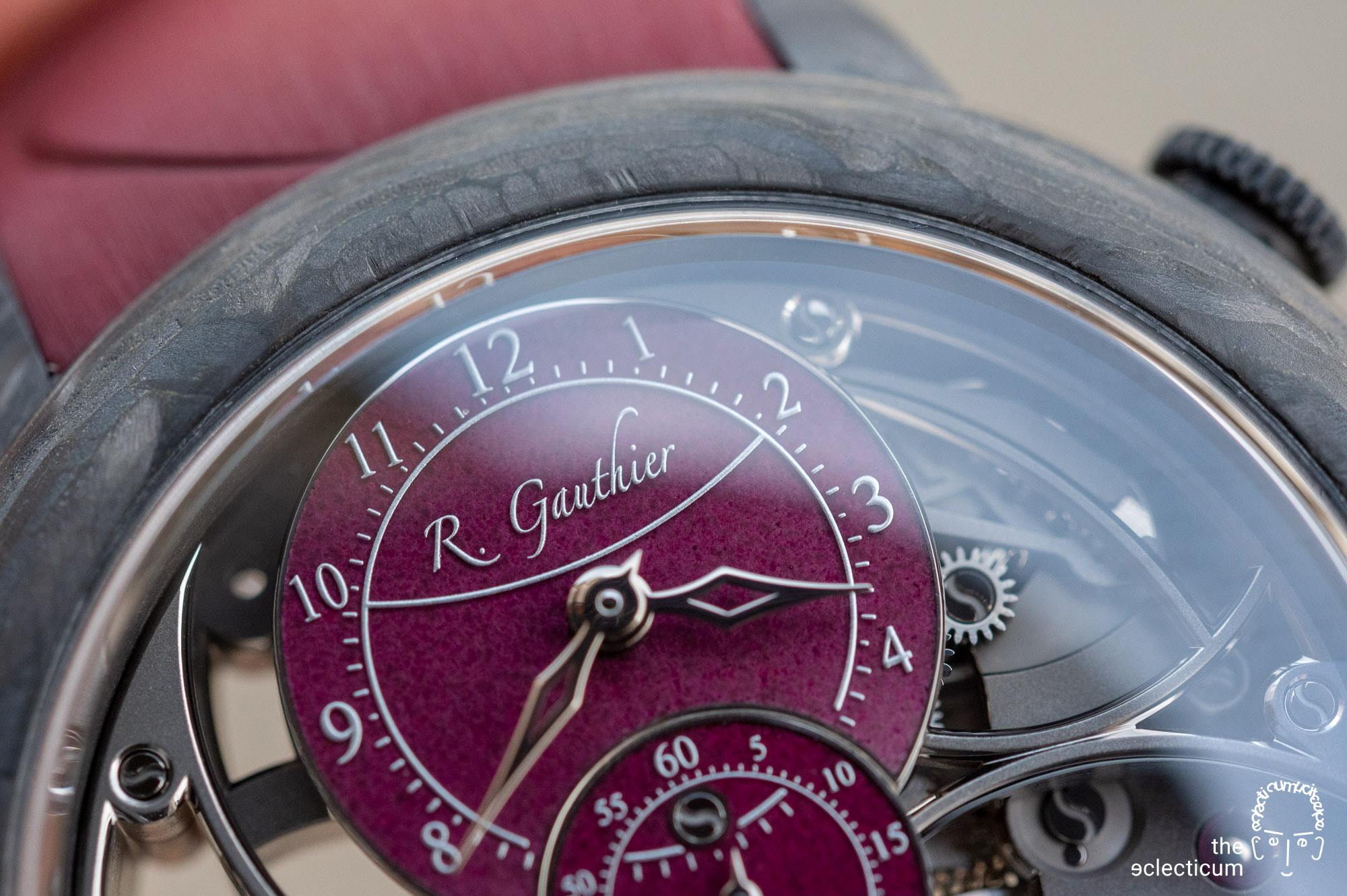 Back to the case, for a minute or two. 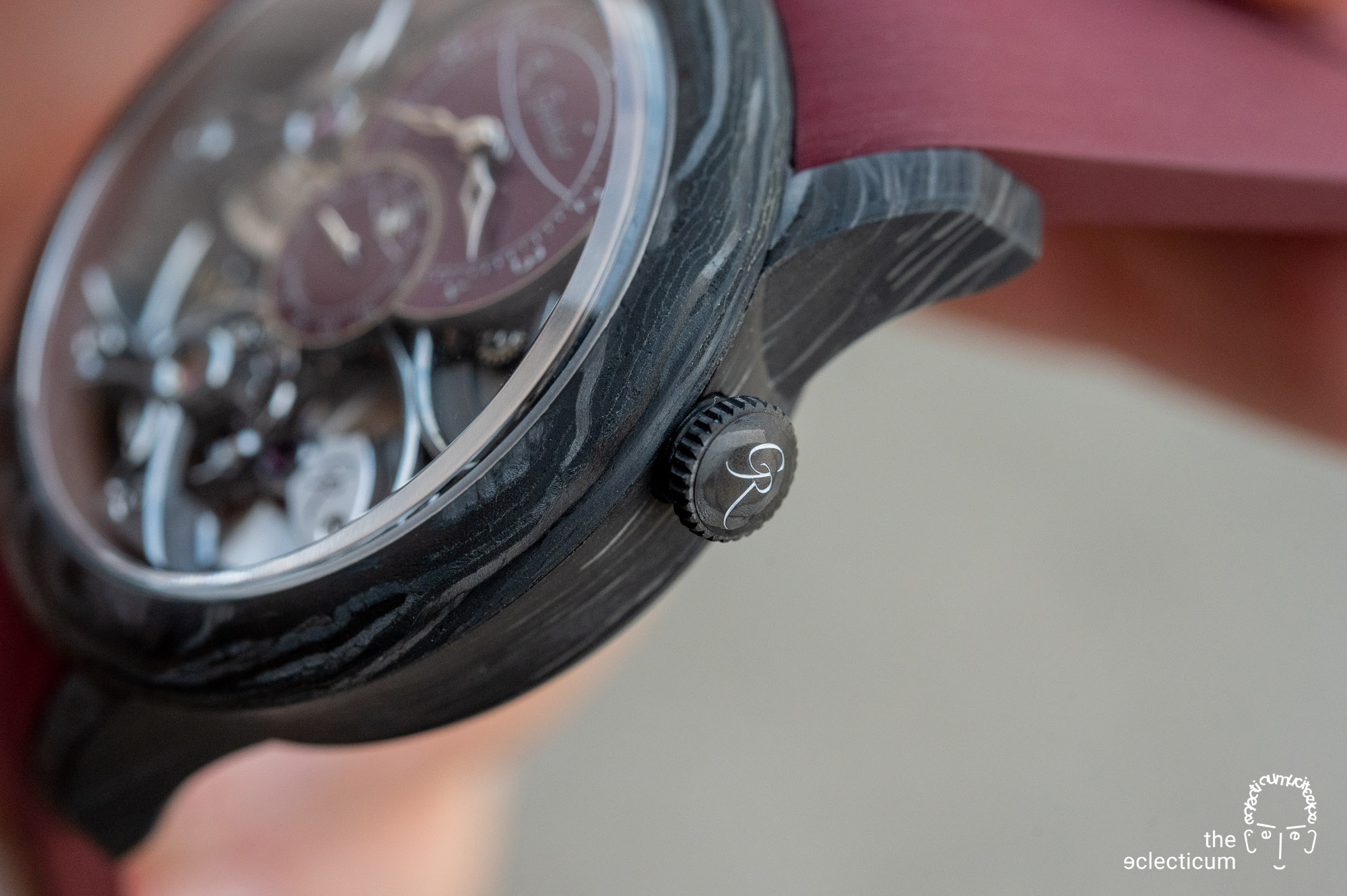 It looks modern and sporty, yet almost fragile like damascene steel. Dark and deep aesthetic, even better with its matt finish look. 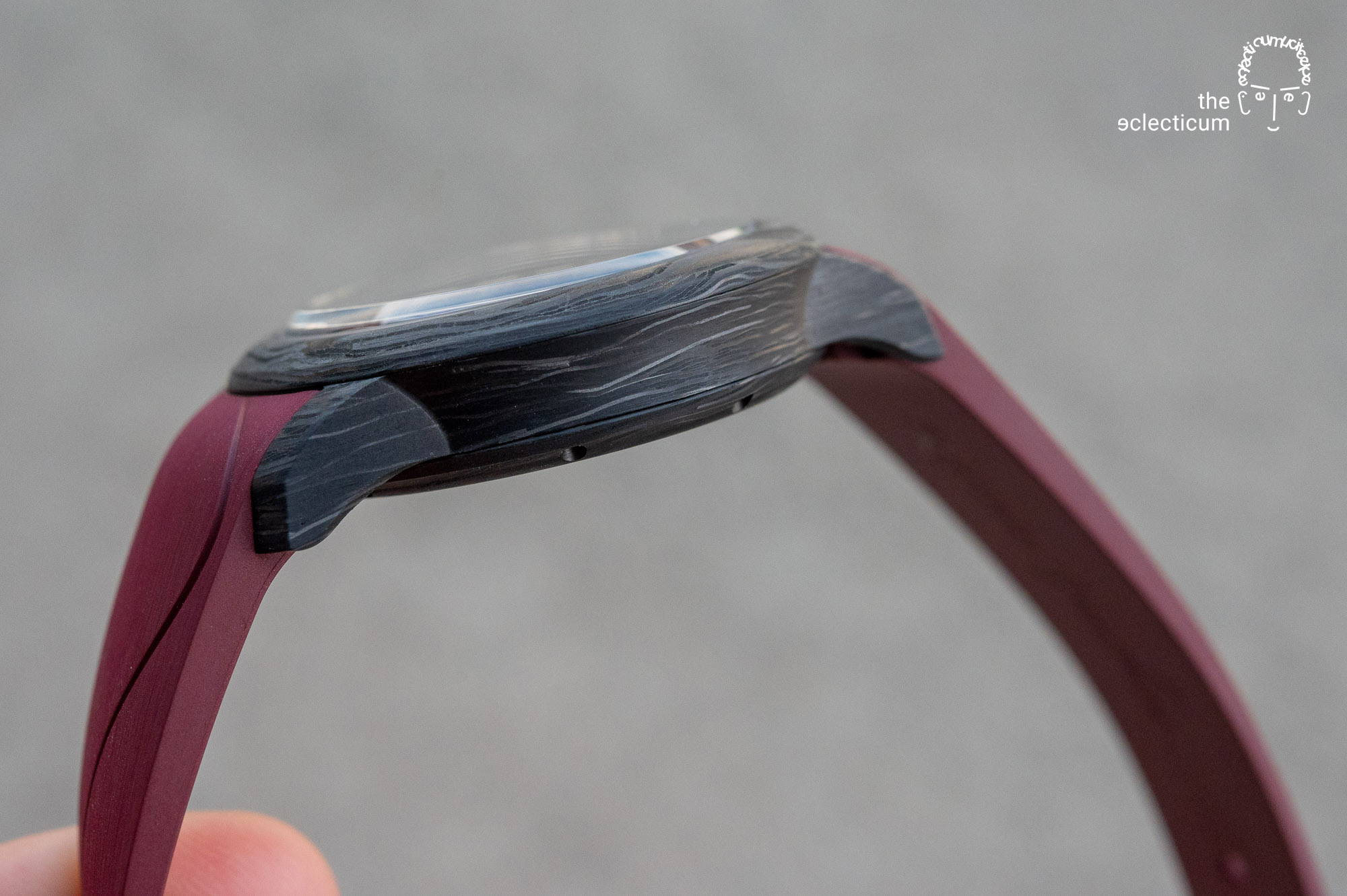 “I have been interested in presenting a watch in carbon fibre for some time, but I was always waiting to find the right material, one that is a bona fide, technical carbon composite. I found that material in Carbonium®. I was drawn to Carbonium® because not only does it possess excellent mechanical properties, but it also looks fabulous and wears light on the wrist.”

Lavoisier Composite (France) is the company behind this (interesting to say the least) material, which is a new generation of material entirely sourced from the French aerospace transformation sector. Composed of two thirds of intermediate modulus carbon fiber and one third of high temperature epoxy, Carbonium® brings its structural properties and a totally unique aesthetic to the parts obtained. Carbon is a fiber three times stiffer than titanium for a weight two times lower.

We like the case and the material for several reasons, the subtle beauty and the superb feeling on the wrist are the major ones. Plus, the contrast it offers to the perfectly designed, executed, and hand-finished parts of the movement. 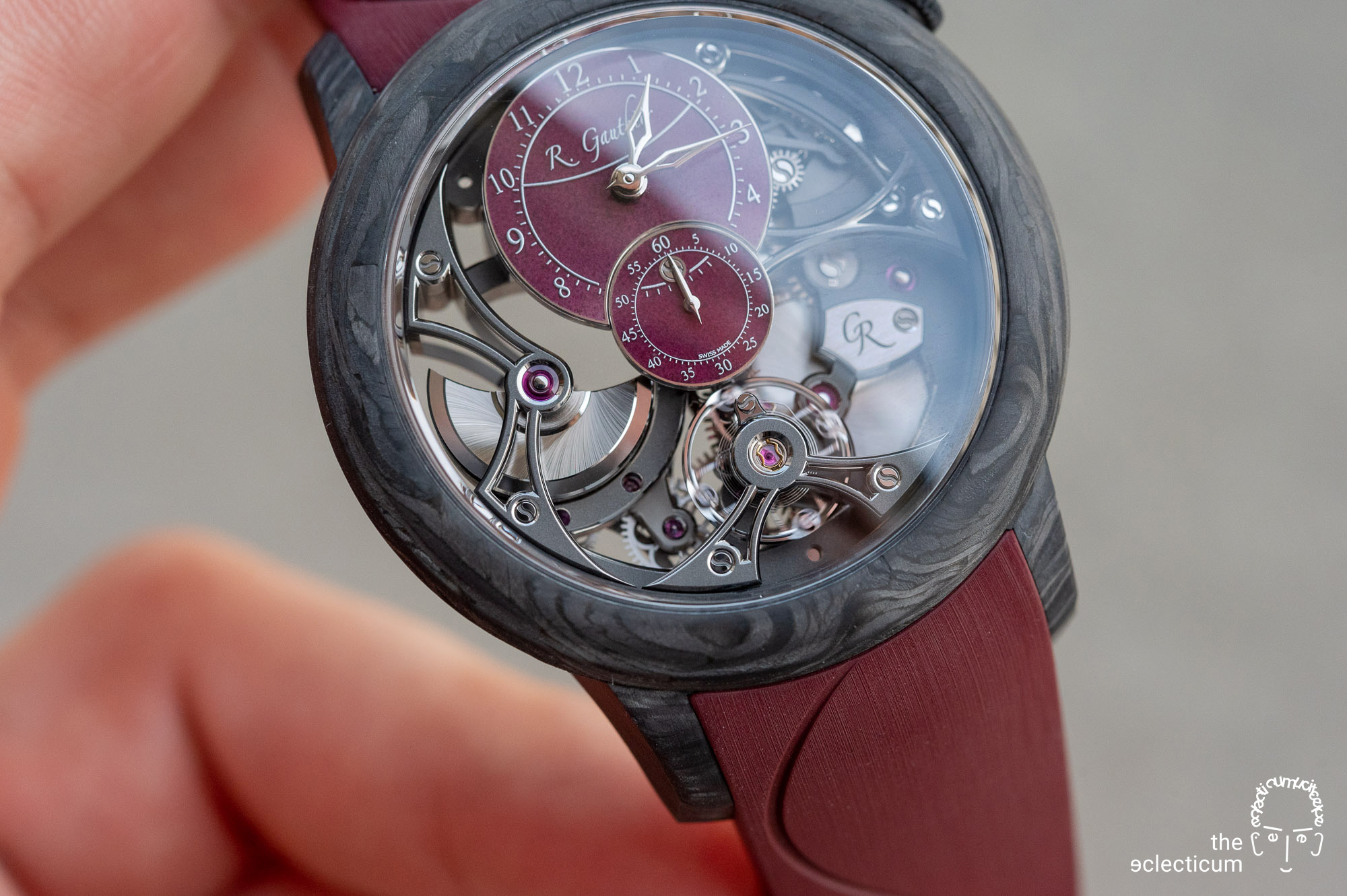 The (in-house) time-only automatic calibre is truly a contemporary skeleton one. It´s ultra-light because of natural titanium bridges and mainplate yet representing traditional crafts at the peak – anglage at its best. 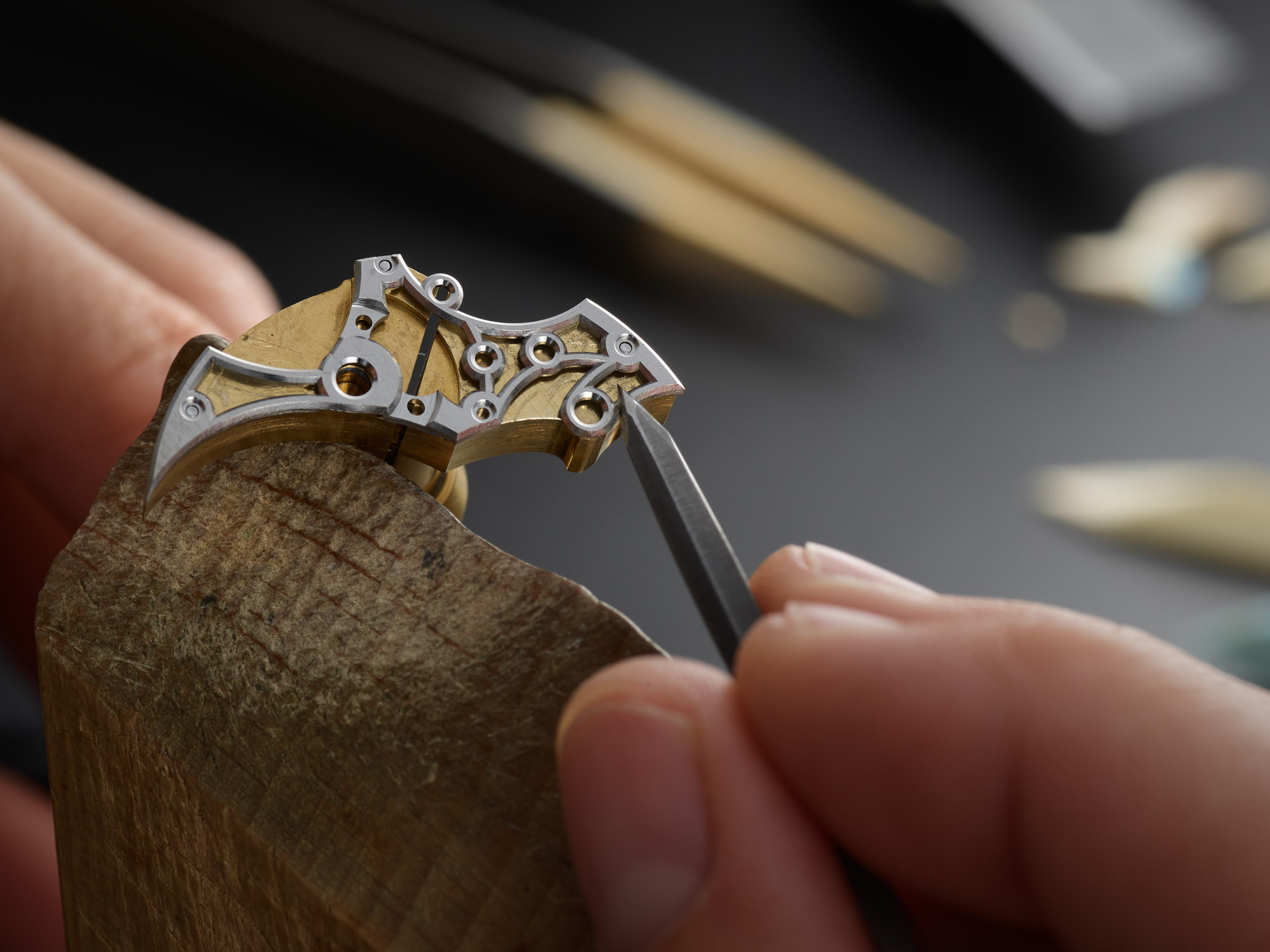 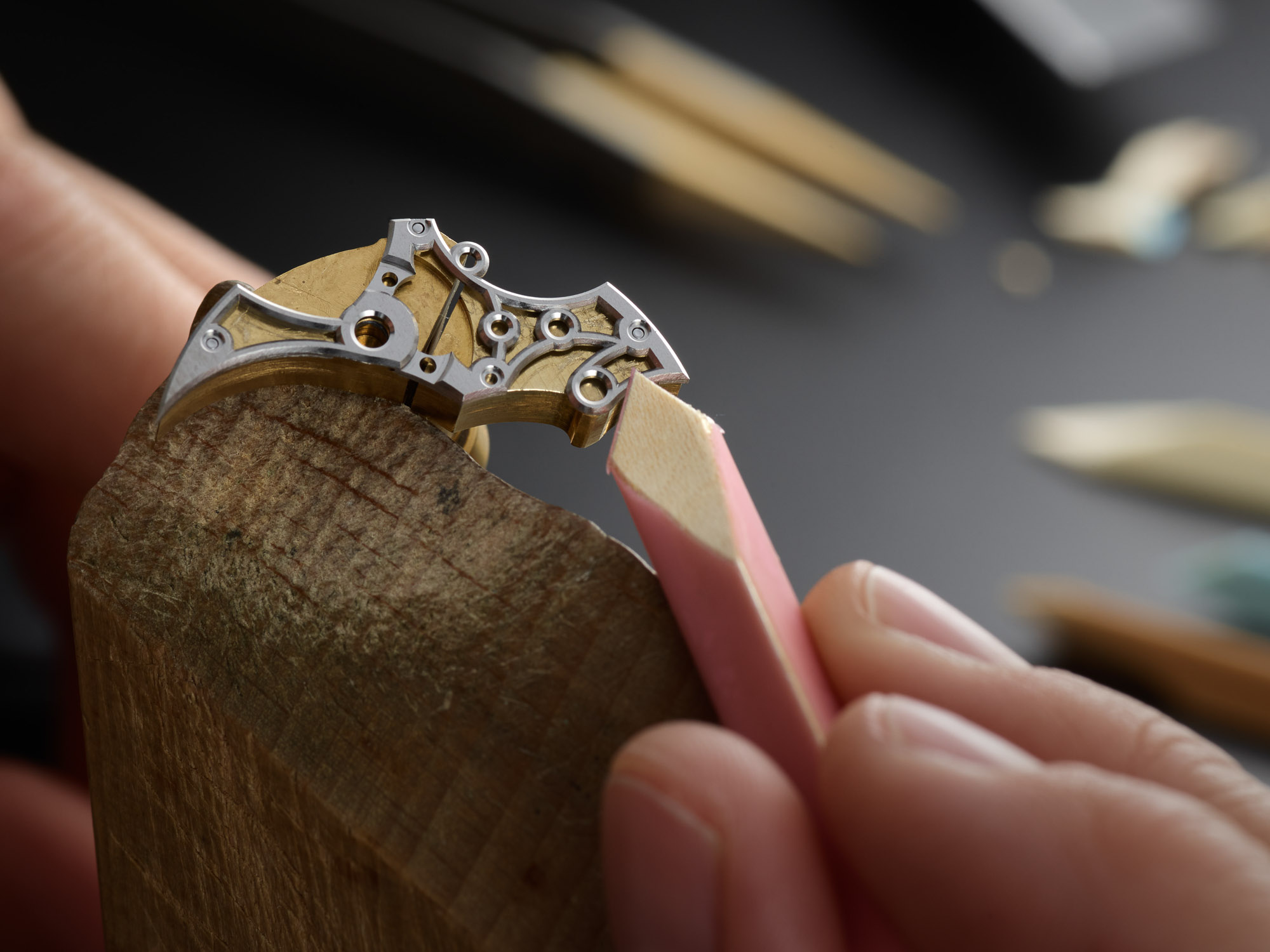 (Softening and smoothing a bridge using a buff) 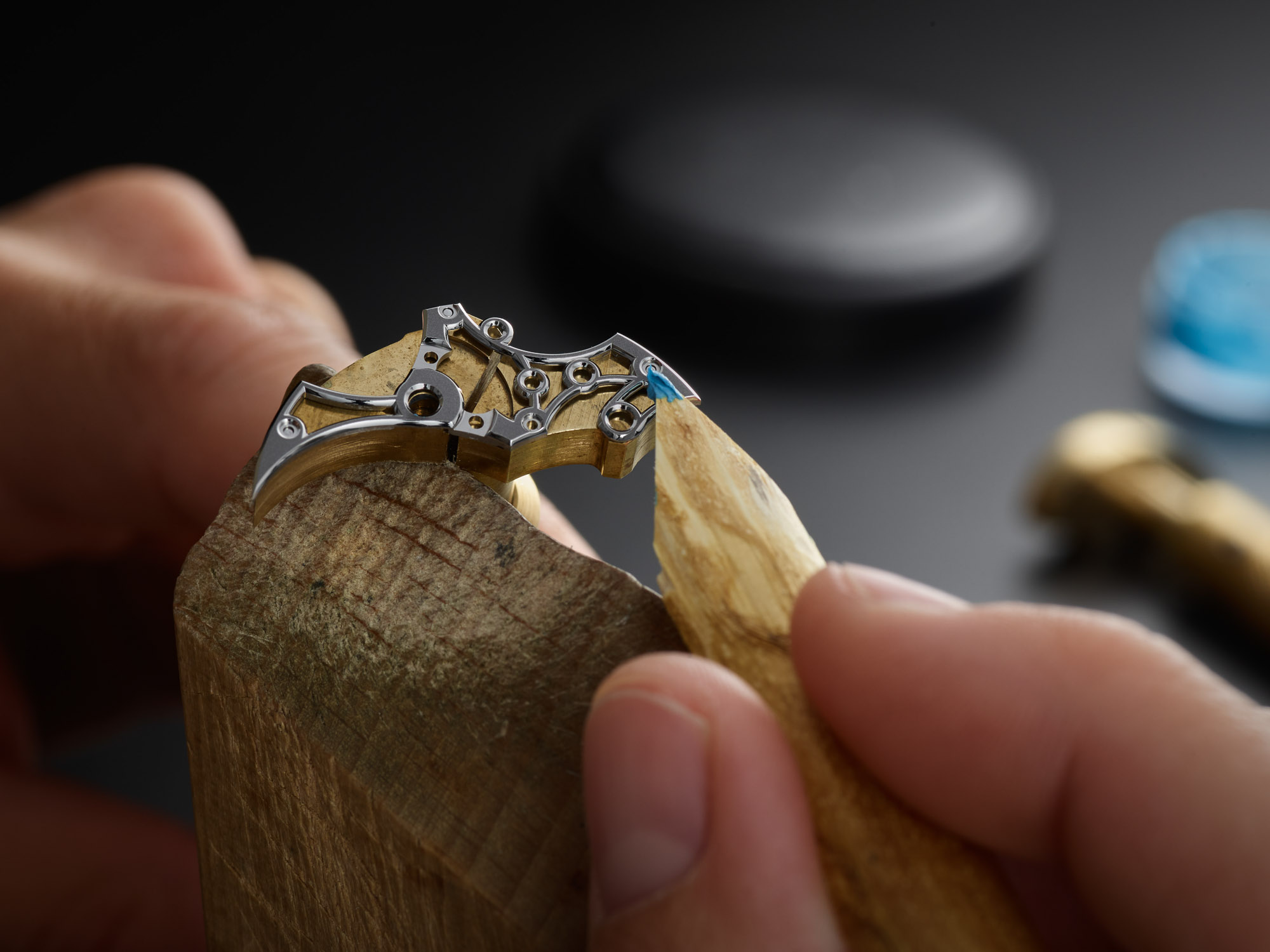 (Polishing a bevel on a bridge using gentian and diamond paste)

“Does it make a difference?”, you may ask. 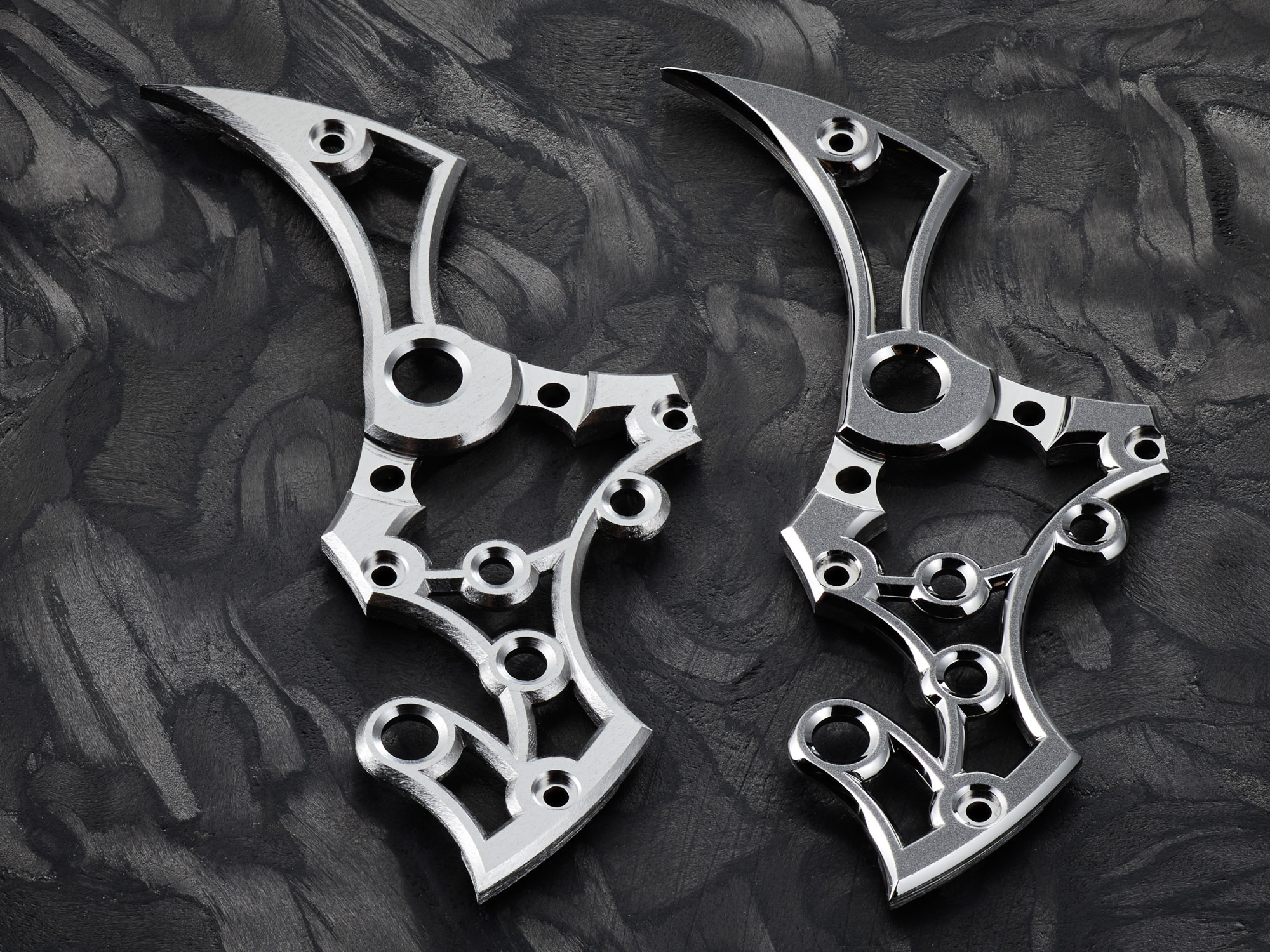 About 250 (!) hours are devoted to anglage alone, that´s to say the bevelling, softening, smoothing, and polishing by hand of the bridges and mainplate, in an extraordinary demonstration of watchmaking artistry. 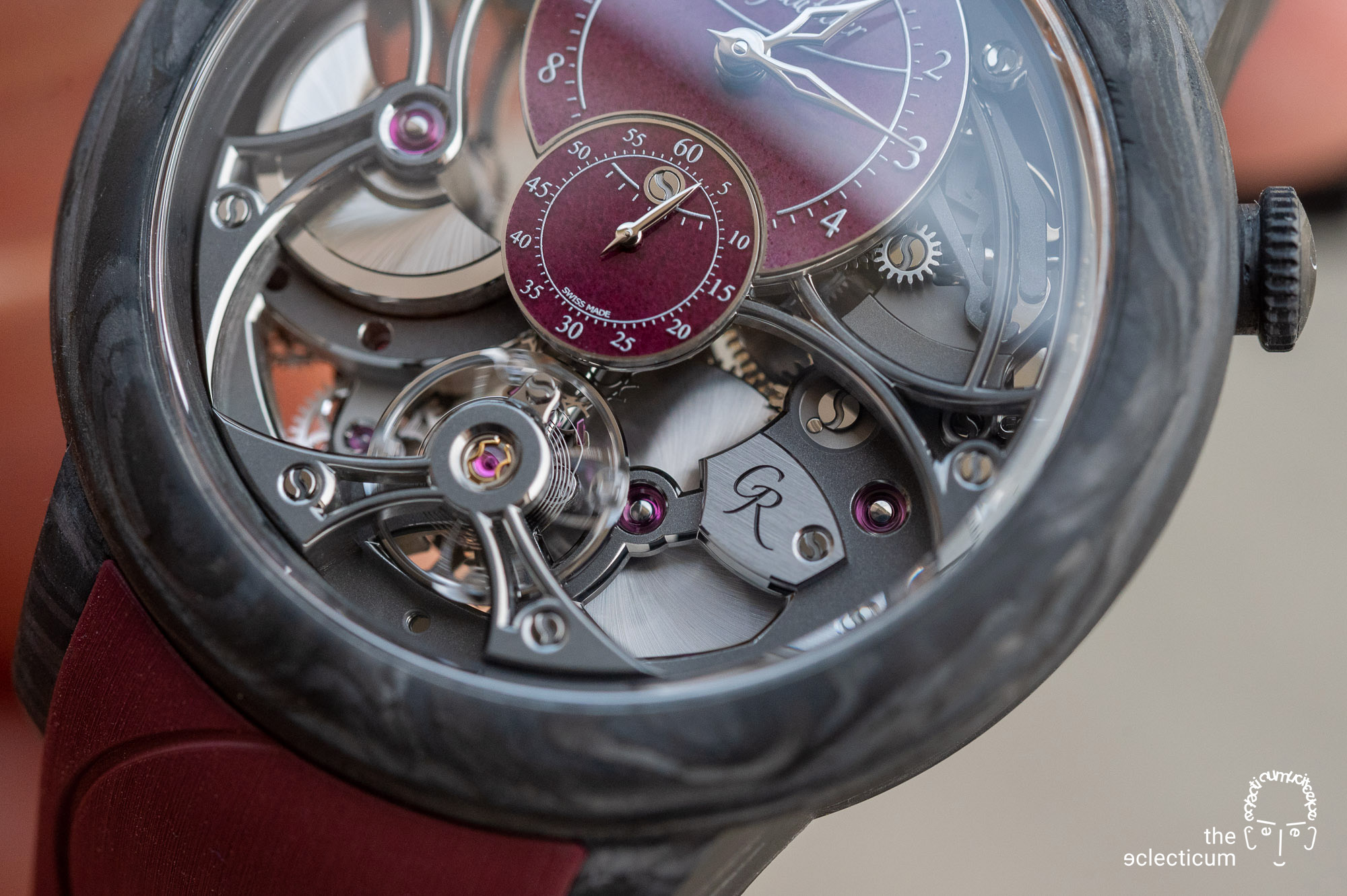 Even when we think the best part is shown on the front, we won´t hide the back here. 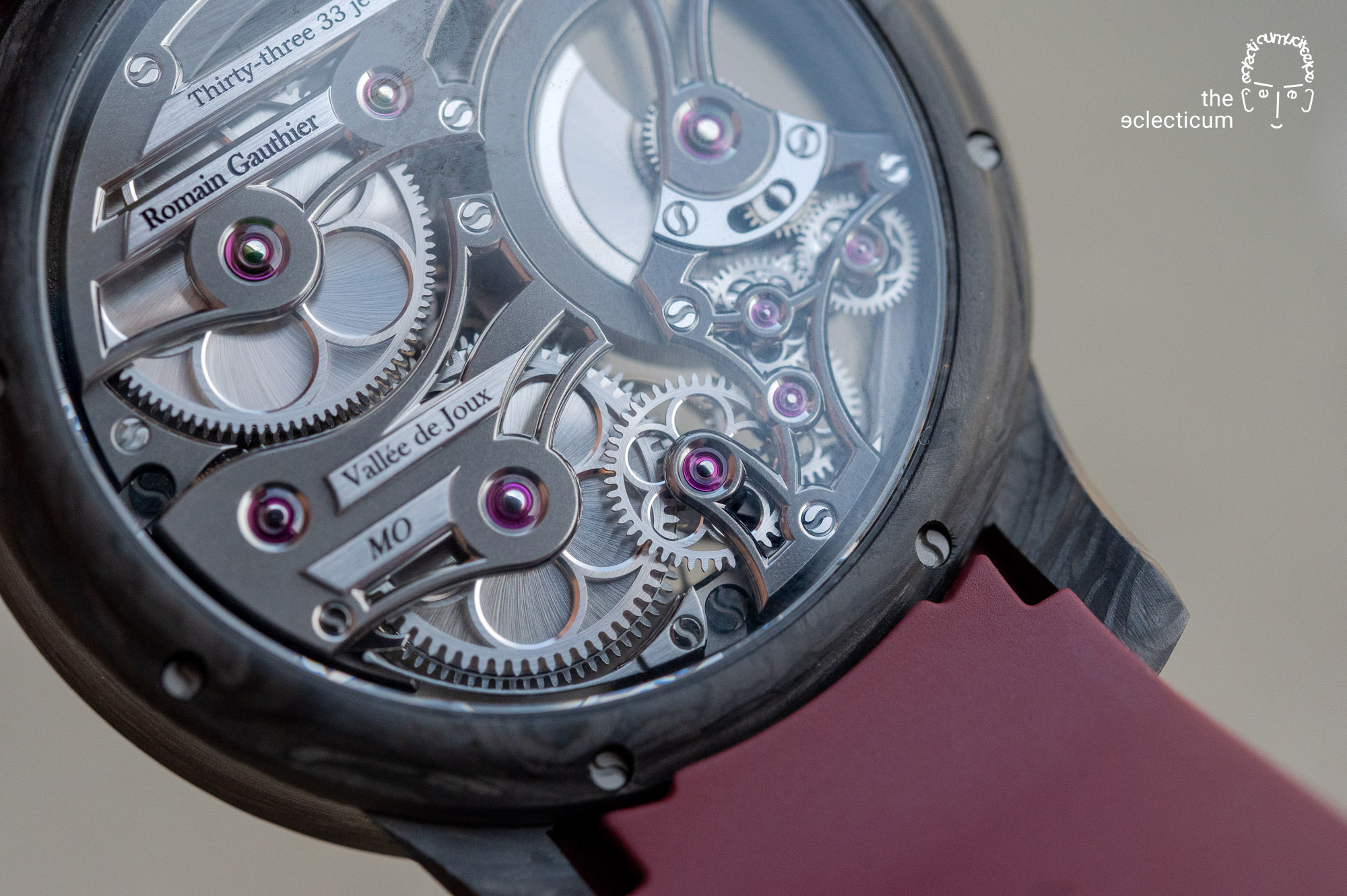 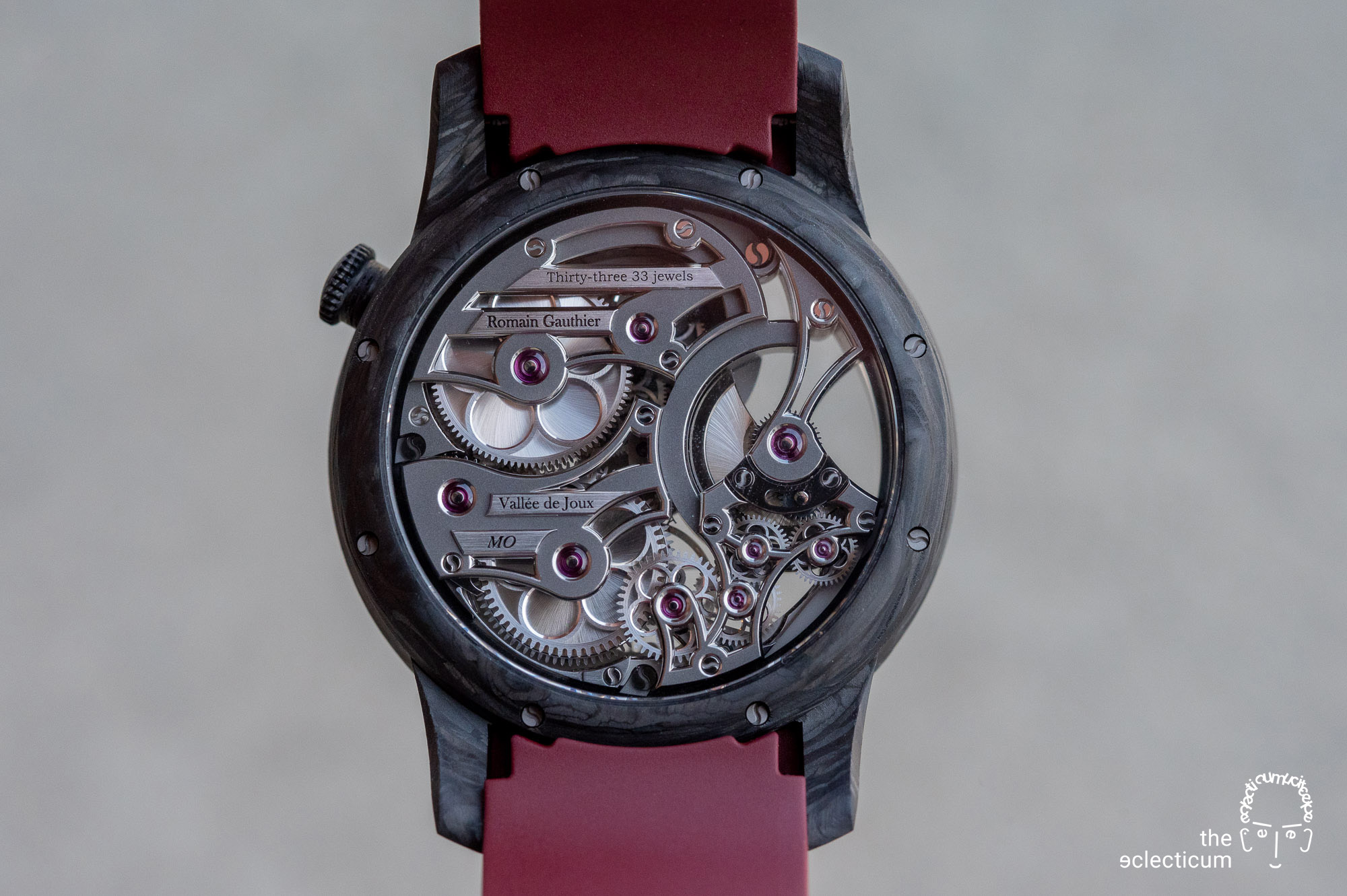 It´s a winner if you are interested in an up-to date men’s watch that is sporty, modern, and yet represents the peak of fine watchmaking in the 21st century.

For sure you can´t expect a bargain because its price is (best to our knowledge) north of CHF 150k. But for sure it´s an ´eclectic choice` and when we look at the 2nd market prices of some (modern yet sporty) watches it seems good value for the money you must pay.

On a more personal side we didn´t expect to like it that much, but the ´burgundy´ is just amazing as a package and especially in the detail. The now introduced colour contrast does change the appearance of the watch tremendously, and in a very interesting way: it softens the impact of the dark case material through introducing colour and additional texture, with the consequence that the mastery of the movement design and finishing becomes even more apparent. The essence of Gauthier’s watchmaking takes a more central stage, still contemporary and modern, and this is what we like a lot!

PS: Thanks a lot, to the team ´Salon Des Horlogers` for letting us handle and shoot the watch (www.salondeshorlogers.ch). 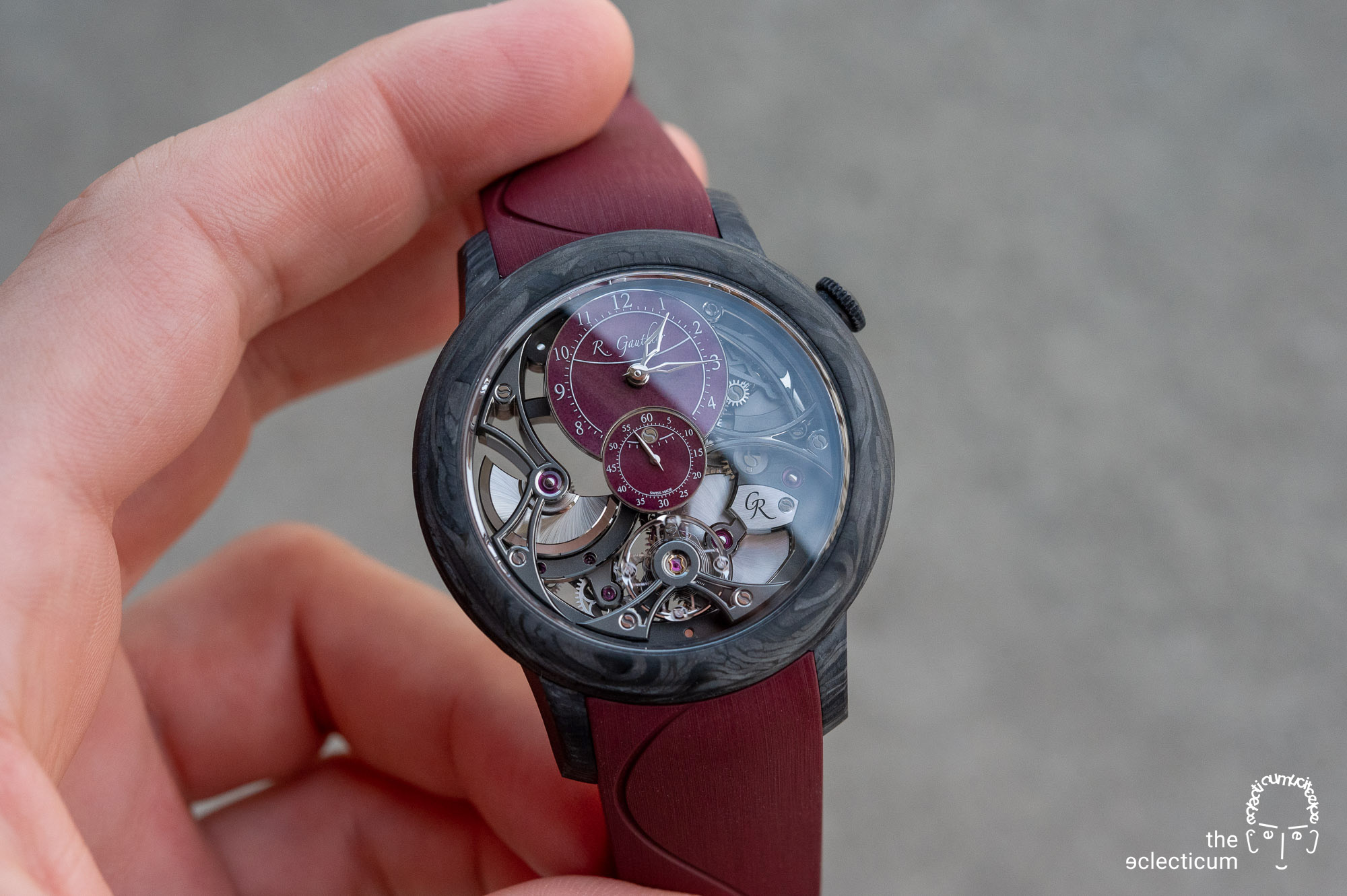