With the Speedmaster Moonwatch 321 Platinum, OMEGA reinvented its watchmaking core philosophy, subtly, surprisingly, and full of delights for the aficionado 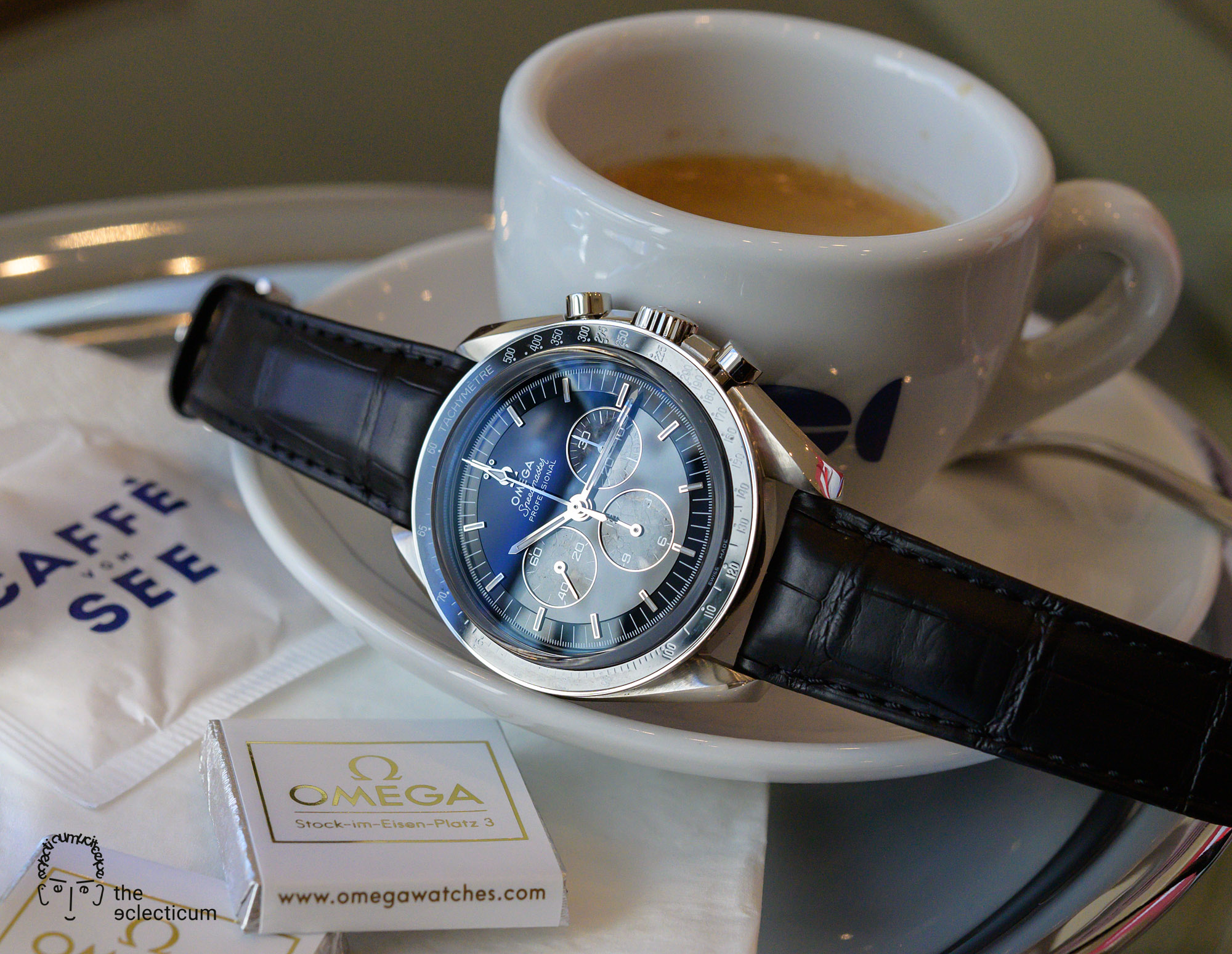 A new Speedmaster is as exciting as the newest VW Golf car – normally. In 2019 however the manufacture did something which few expected (in this consequential way), they presented a re-creation of the legendary Cal. 321 column wheel chronograph movement housed in a platinum Speedmaster case. What looked a bit weird is actually a collector’s delight which feels right to so many senses … the OMEGA Speedmaster Moonwatch 321 Platinum. 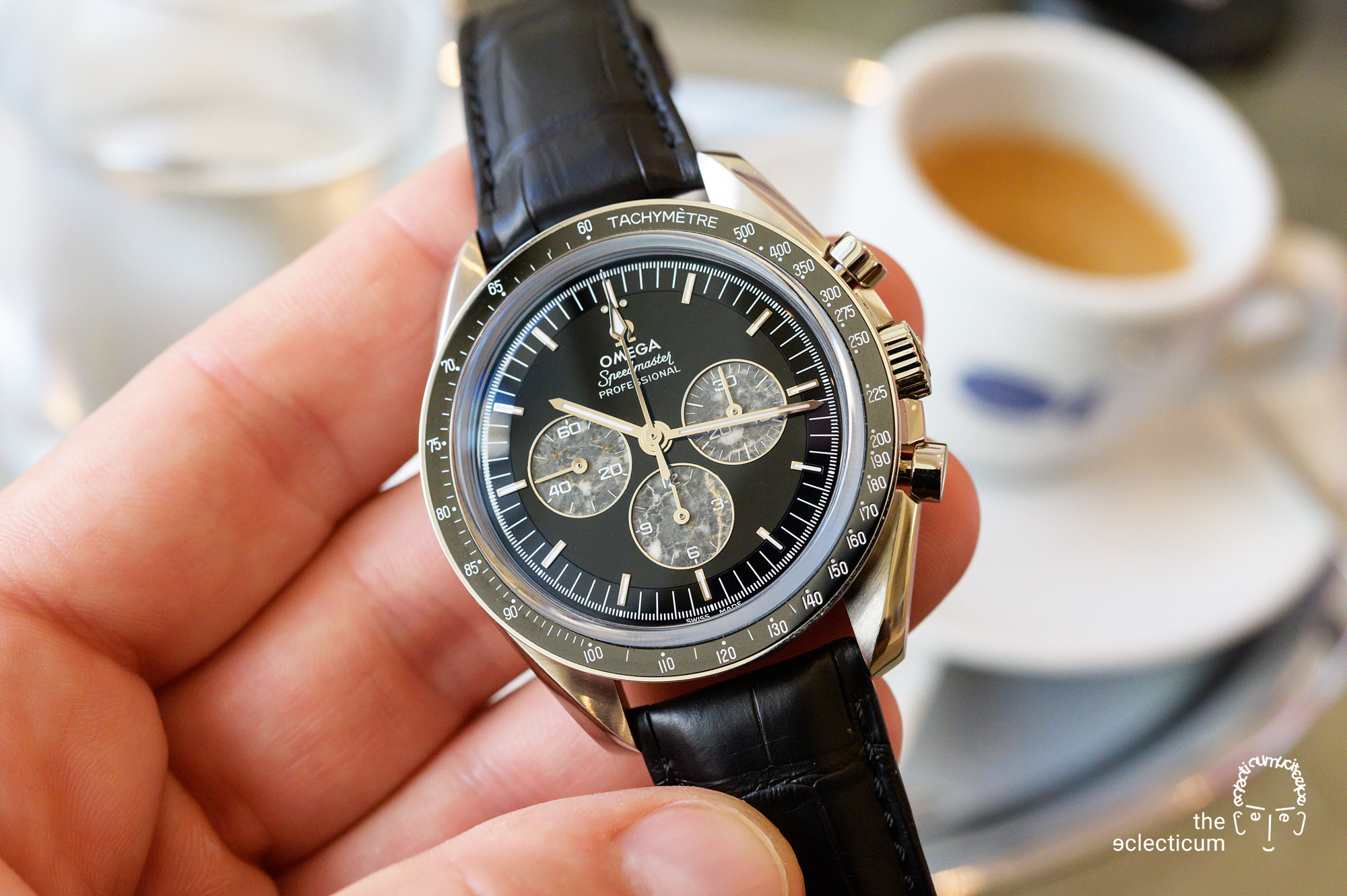 It was widely expected that OMEGA one day would either launch a classical columnwheel chronograph movement for its Speedmaster collection, upgrade the Cal. 1861, the last non-Master Chronometer certified movement in OMEGA’s stable, or do both. They did the latter, as we now have the Cal. 3861 as well as the Cal. 321, a re-creation of the original Speedmaster movement that saw its origins in the high-grade Cal. 27 CHRO C12 from Lemania.

A re-creation for the aficionado – down to the core!

And what a revival that was! OMEGA went to greater length than needed, they consulted the original technical files from Lemania and also x-rayed one original watch, specifically the last watch ever worn on the moon, by astronaut Gene Cernan, during the Apollo 17 mission in 1972. 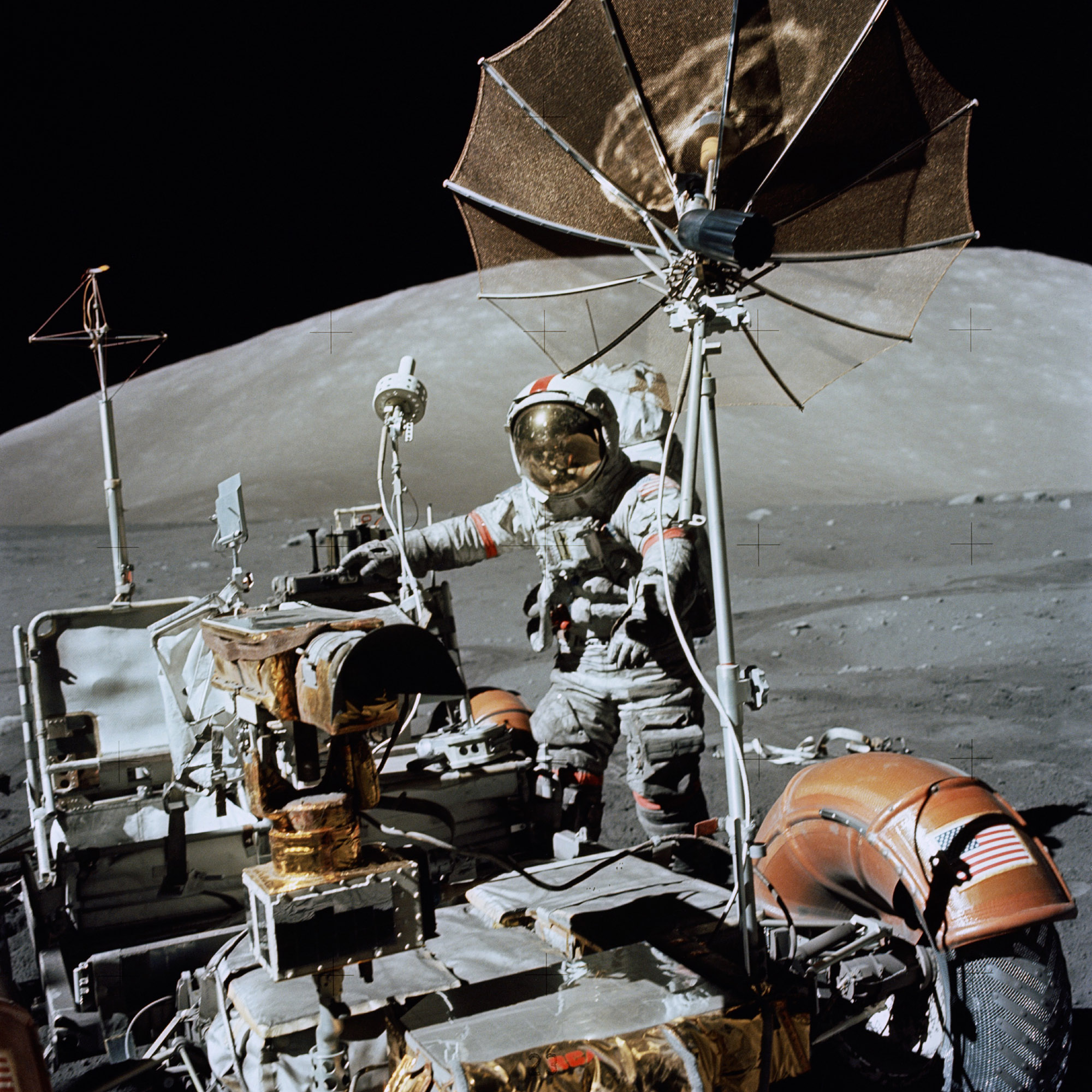 (Gene Cernan on his moon rover during the Apollo 17 mission, wearing his Speedmaster) There were a number of exceptional challenges in recreating this movement. What few appreciate is that materials and technologies evolved over time, and this is where the issues start: Any movement is, if I am allowed to oversimplify matters, a child of its time – which means that construction, design, production technologies and materials reflect their respective state of the art. So, for any vintage movement such as the Cal. 27 CHRO C12 to be reborn it is not appropriate to simply carbon-copy the old construction: tolerances can be set much stricter today thanks to advanced materials, machinery and tools, production techniques (or skills) might have vanished over time, materials banned on safety grounds, expectations set at different levels, to name just a few impediments to taking the short cut. 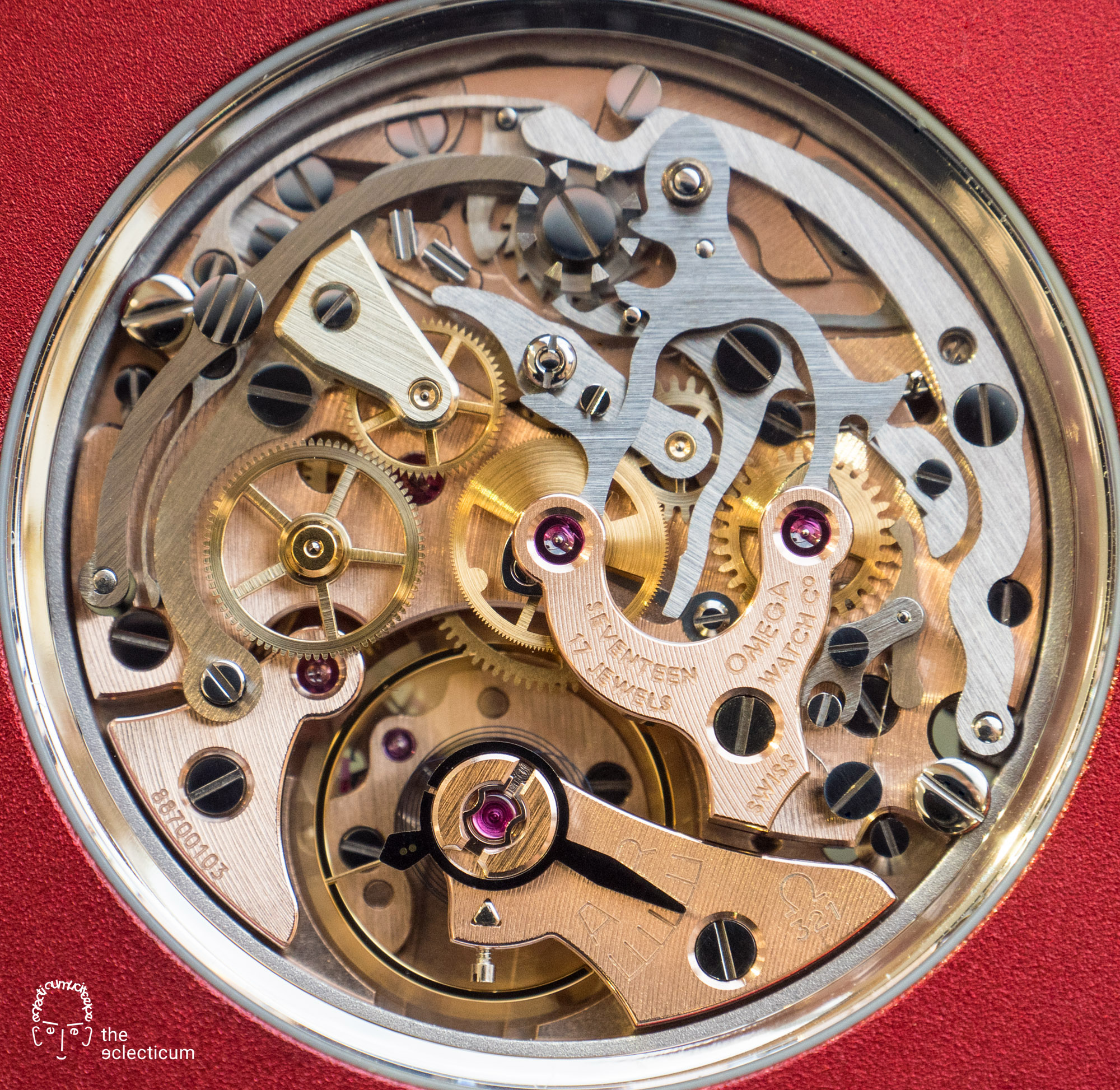 (Prototype of the recreated OMEGA Cal. 321) So, to re-create a vintage movement is perhaps a much more involved matter than to construct a new movement from scratch: you want the vintage vibe in aesthetics and layout, but modern reliability and performance, and probably the easy of assembly and regulation as well. This led, for example, to a classical but contemporary Swiss lever escapement and a bridge coating with OMEGA’s own Sedna gold instead of copper, while at other places original material could be retained, such as the bridge carrying the intermediate chronograph wheel which still today is made of German Silver. 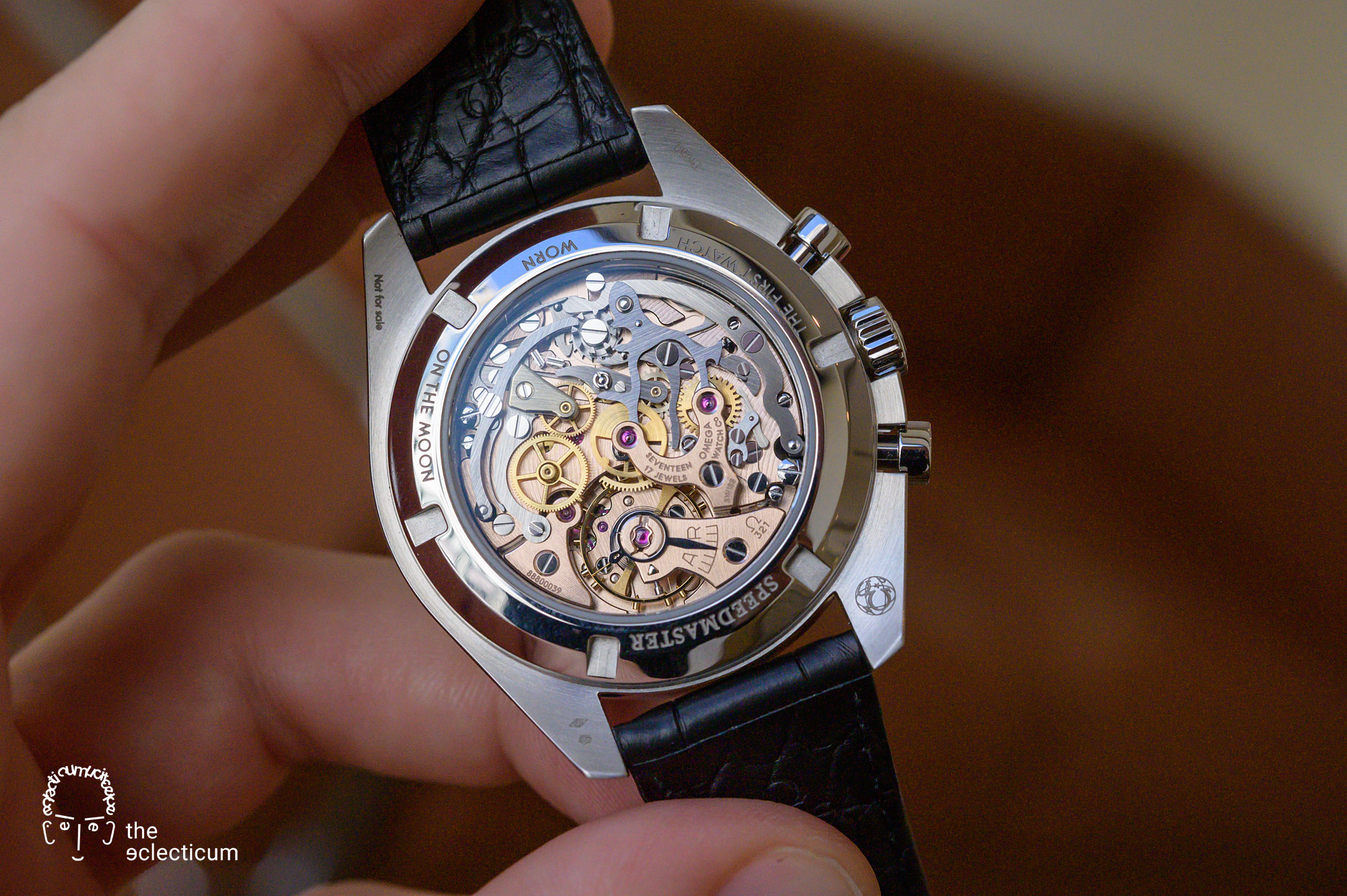 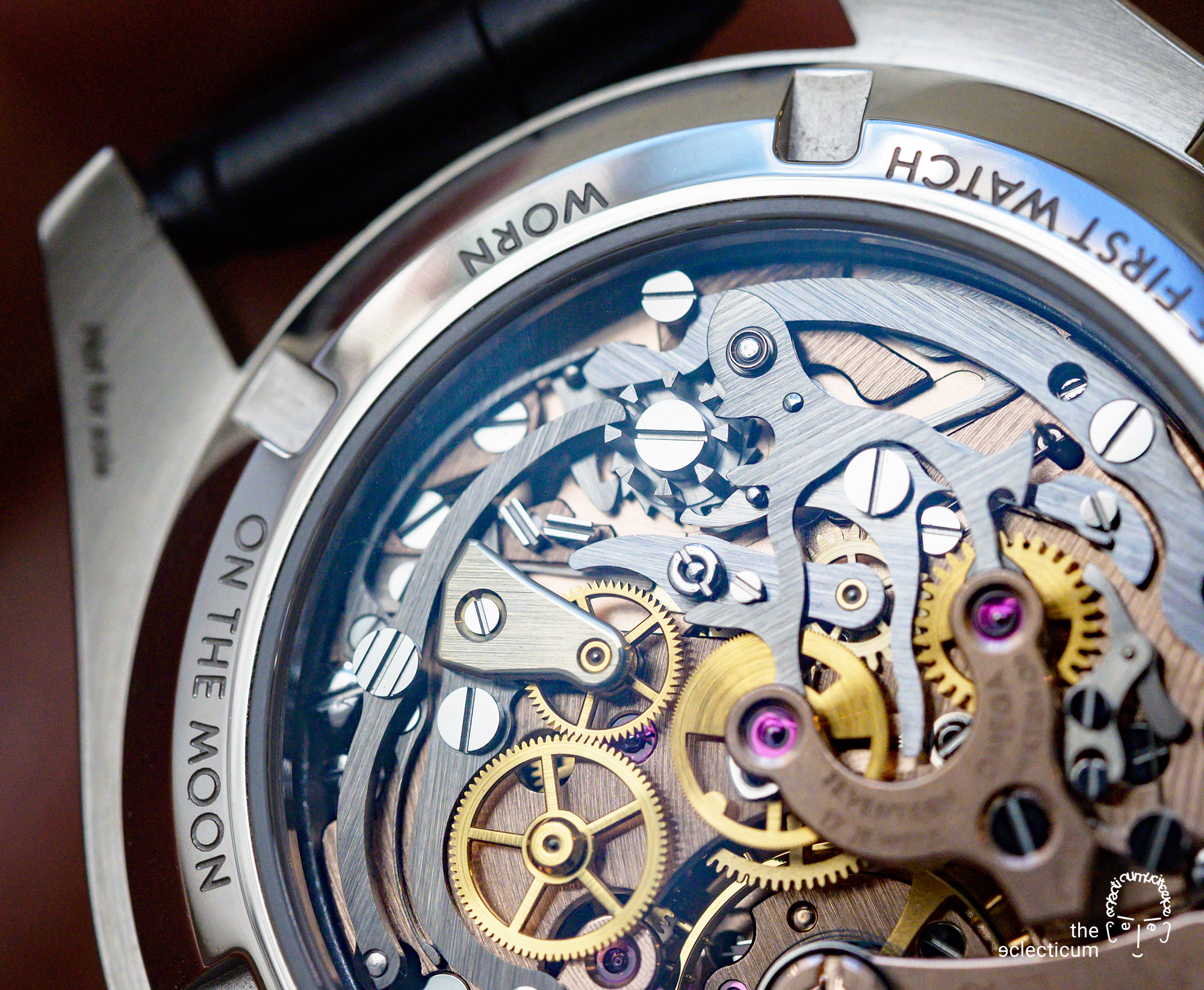 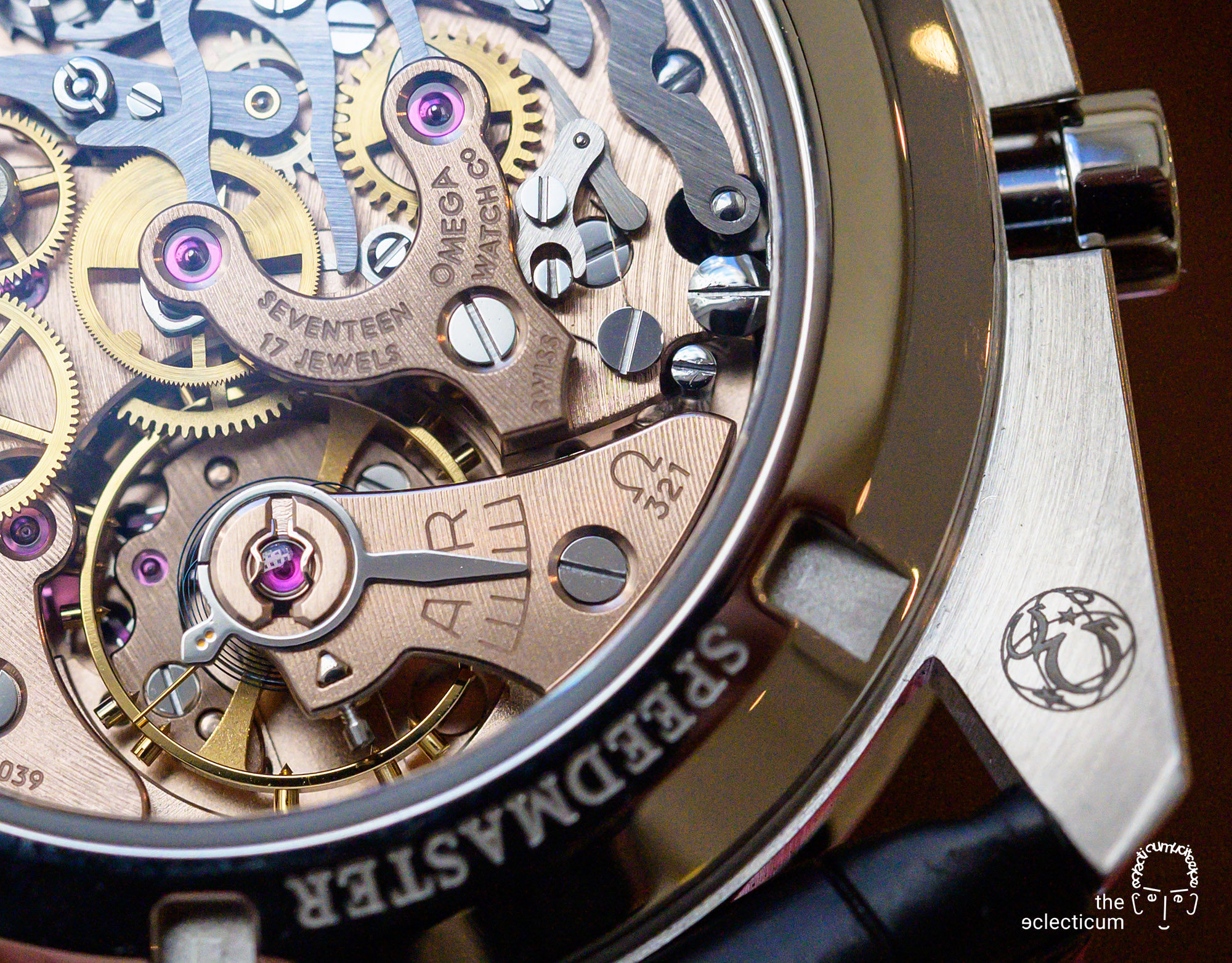 The thoroughness with which OMEGA conducted the project is not confined to the construction aspects alone – it also reflects in the production: The Cal. 321 driven watches are made in a newly created dedicated workshop where one watchmaker assembles and regulates a watch from the beginning to the end – quite a contrast to the otherwise really industrialised ‘assembly line’ style of OMEGA’s normal watch production.

As a result, the movement looks like freshly out of a time machine: traditional in layout and construction (lateral clutch, screwed balance, regulator), with the apparently very same high quality functional yet decent aesthetic finishing (a sight of delight for the author). And isn’t this a real column wheel? 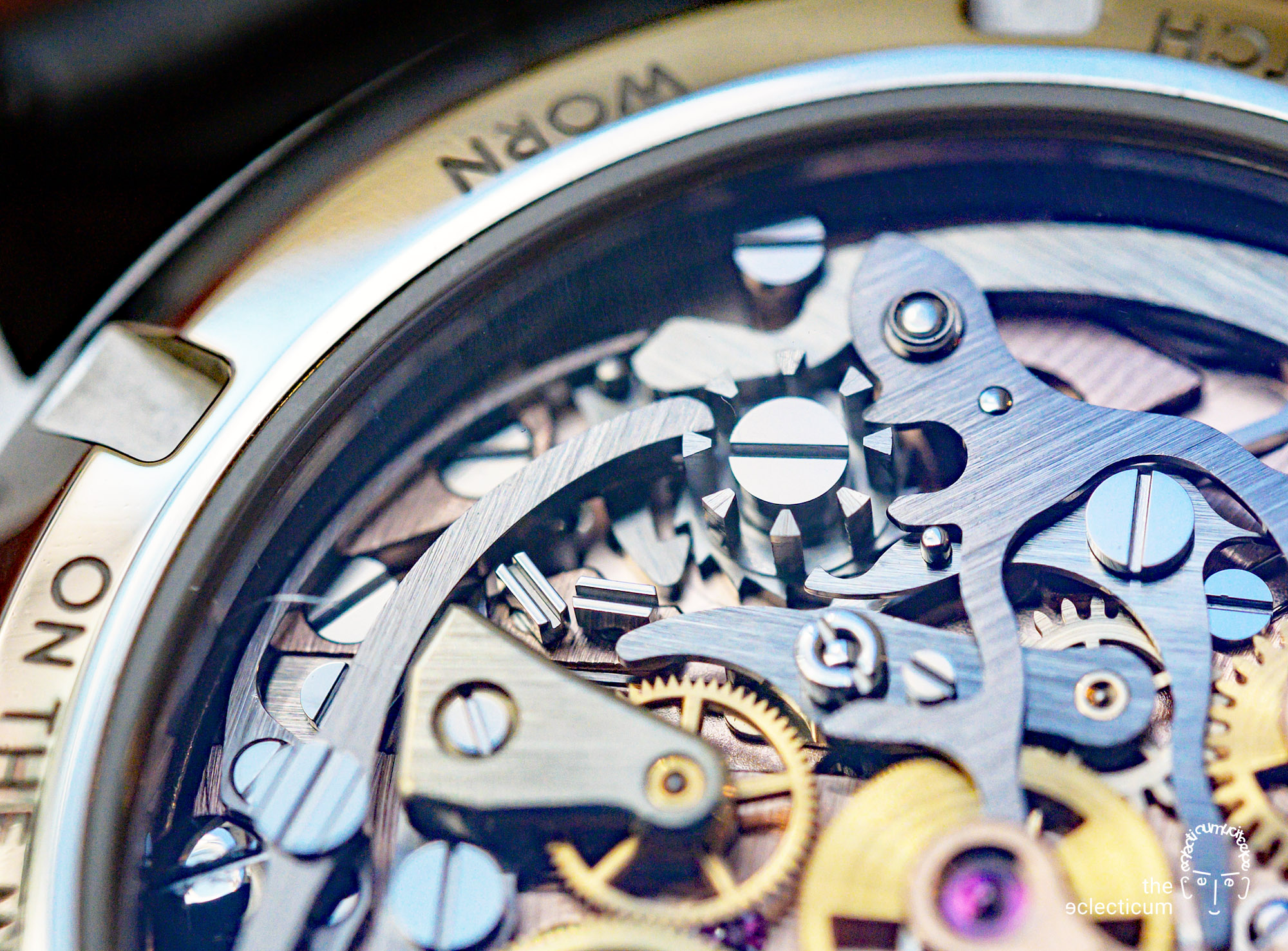 In the prototype I had the pleasure to handle it was not too perfect: If you look closely, you’ll perhaps notice the slight discrepancy between the finishing of the chronograph bridge (hand-anglage) and of the main plate (machine cut anglage) – I suspect this is a prototype lapsus only – I cannot seriously imagine OMEGA would leave such an obvious inconsistency in “serial” production. 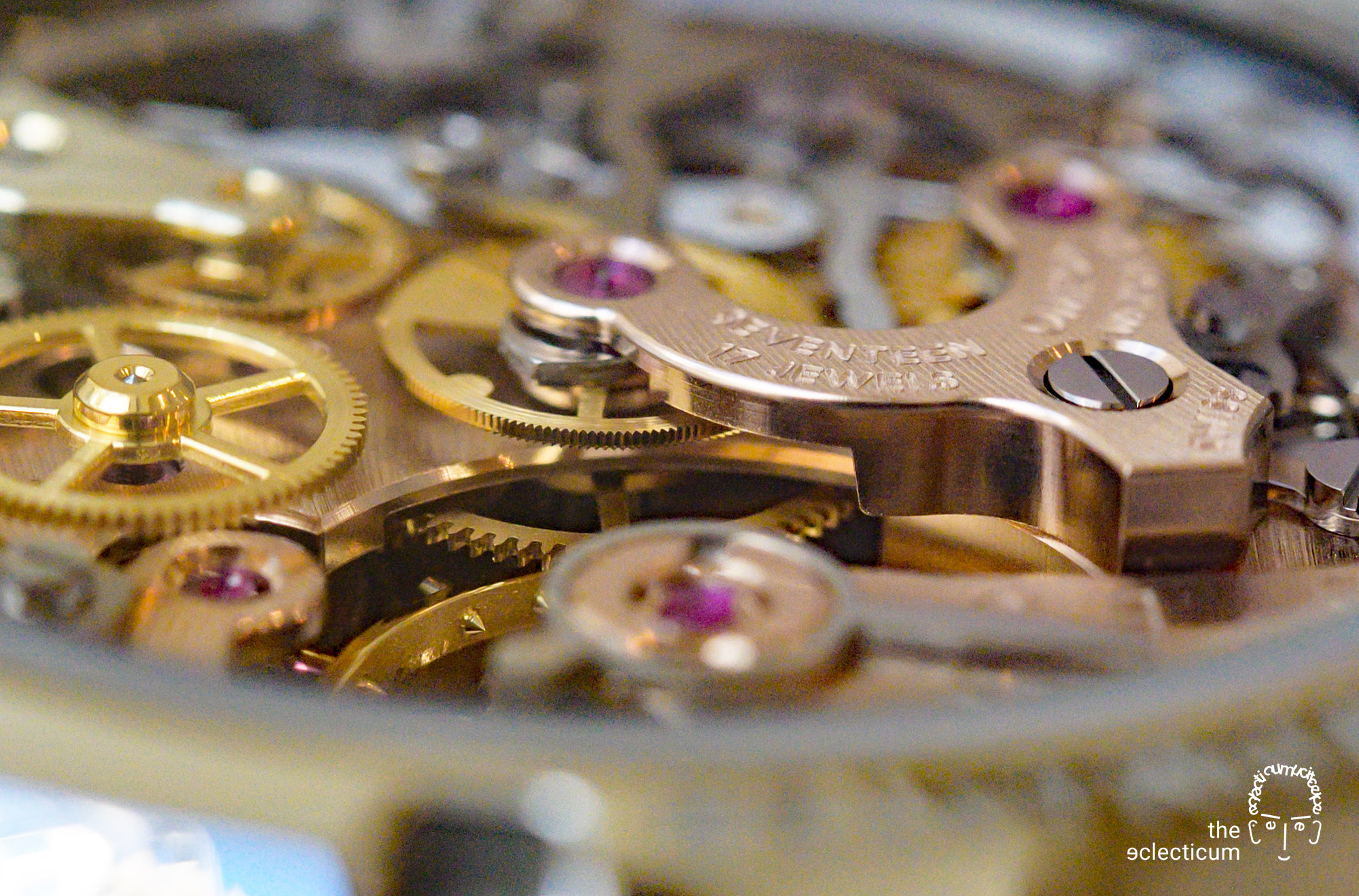 What strikes me further is that OMEGA did not opt for its advanced co-axial escapement originally developed by George Daniels – this is reserved for all the normal Speedmasters including the new Cal. 3861 driven ones – with the sole exception being those with the most basic (Cal. 1861) and with the most elaborate (Cal. 321) movement – this is a curious line-up to say the least, and I guess a transitory situation as far as the 1861 is concerned. 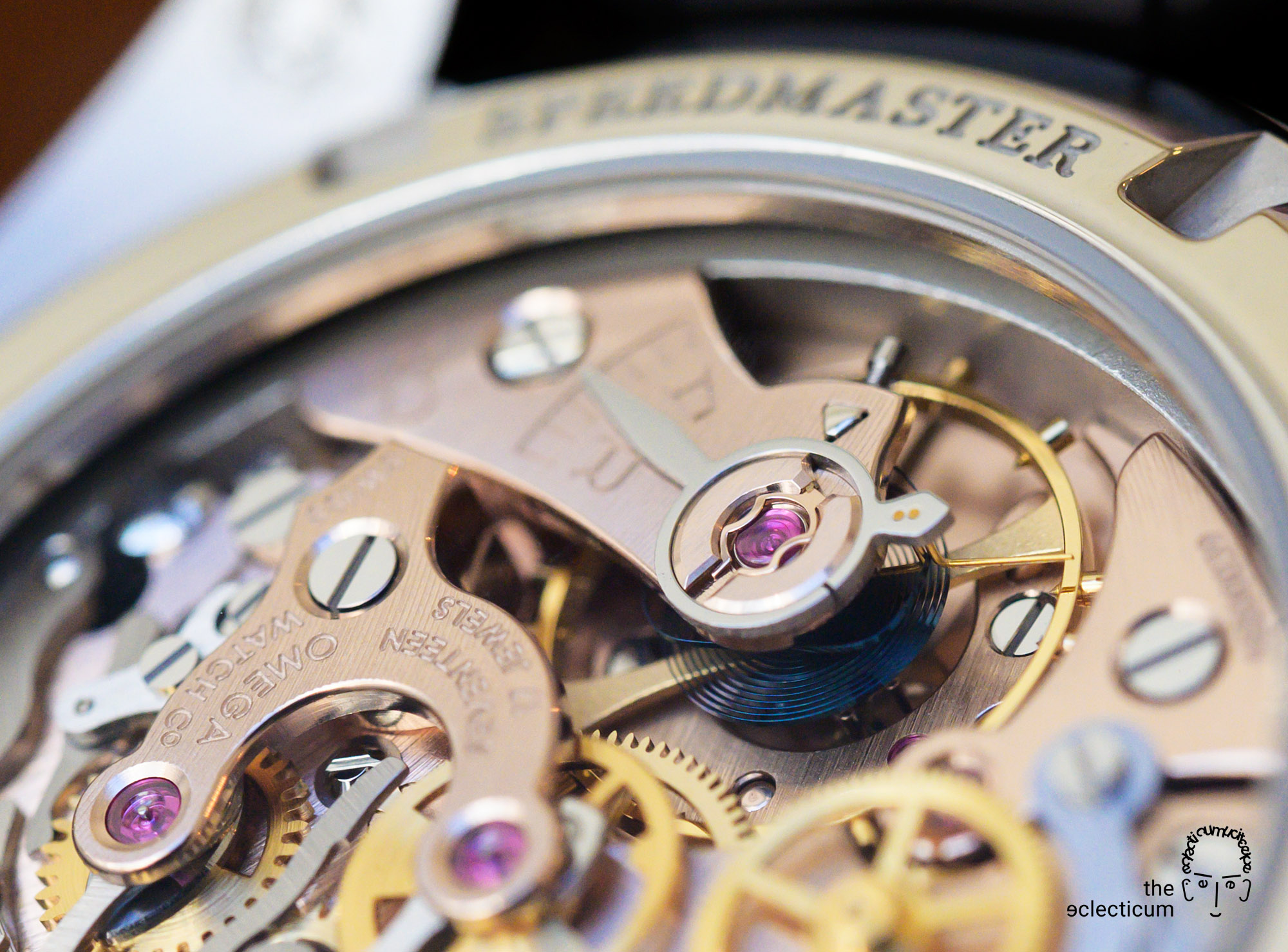 Overall, I presume is is not surprising that OMEGA went through all the efforts and the concomitant significant investment (rumours have it that the company had to commit funds in the excess of 2 mio. CHF just for the construction), what is surprising is that they did it in the first place… but we come to that in a bit later!

While all above is nice to know, the important question is that of the bottom-line: do all the efforts pay out? For us, the answer is a clear ‘yes’ – and the watch stands out amongst the other Speedmasters, but it also stands out amongst its peers. In a way quite unusual for OMEGA!

First, there is the haptics. The case is crafted in platinum, a rare and expensive (to machine) material and seldomly used at OMEGA. OMEGA of course uses its own alloy, blended with white gold. The material has a special, ethereal shine to it, and this works well together with the oh so well-known classical case of the Speedmaster. 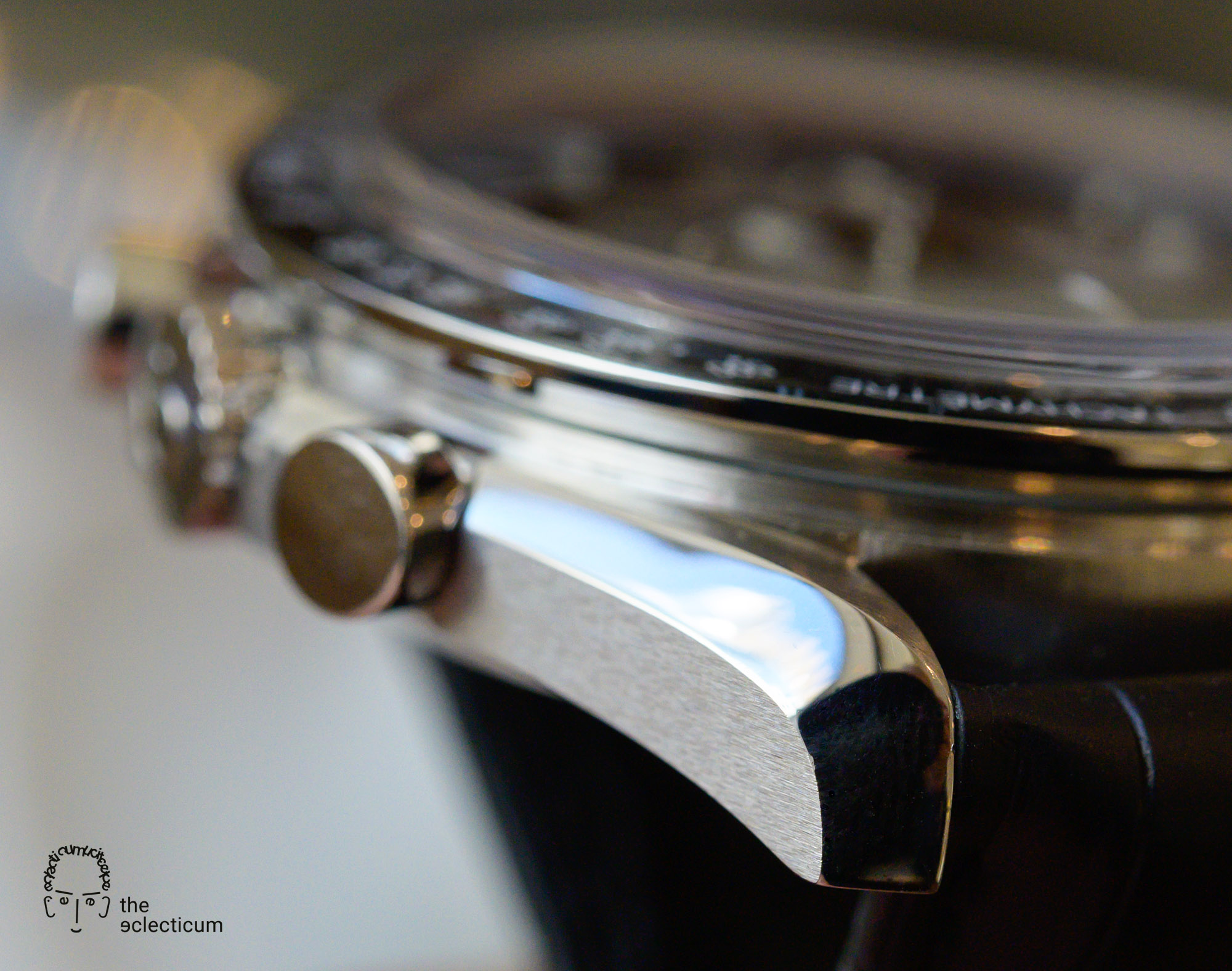 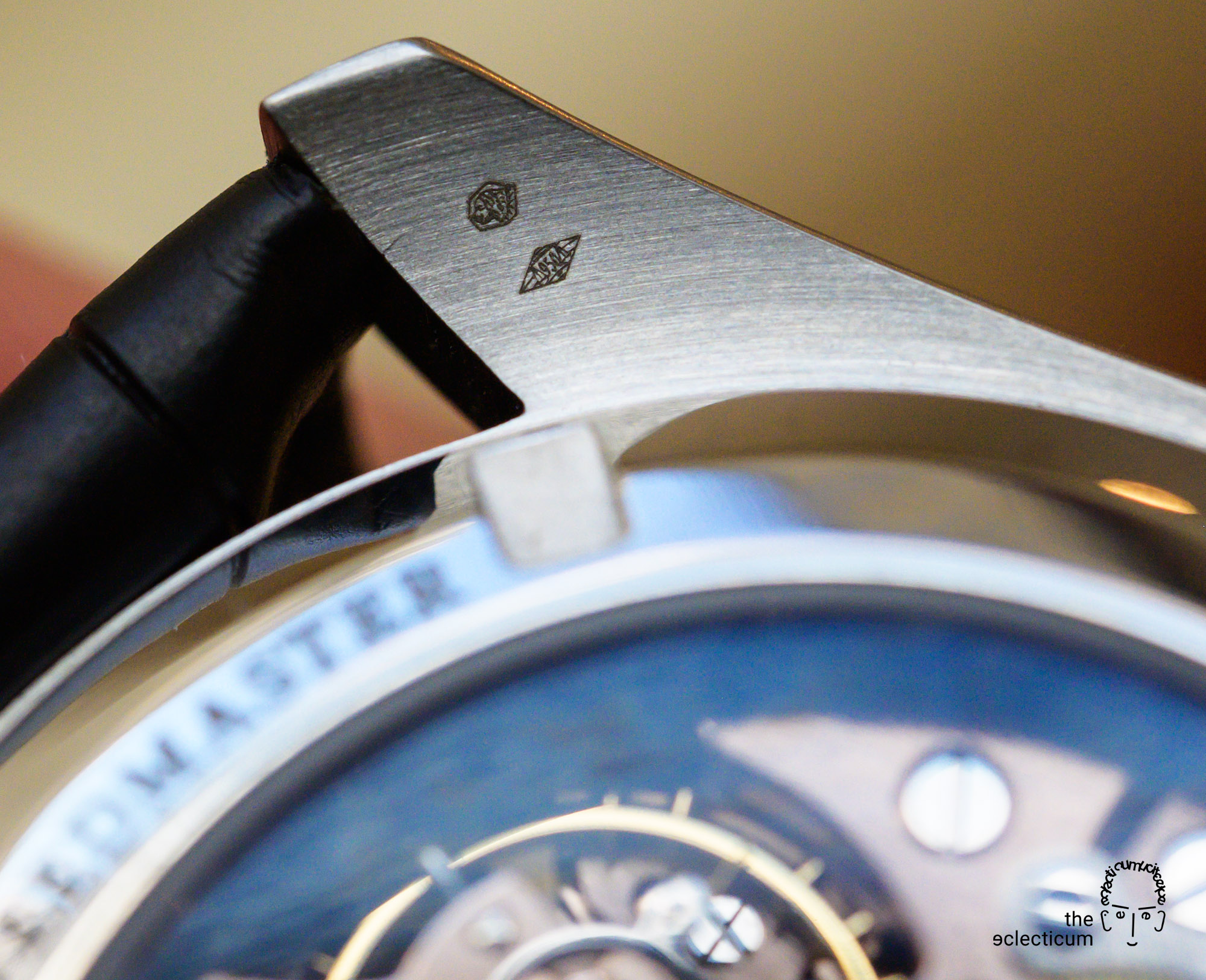 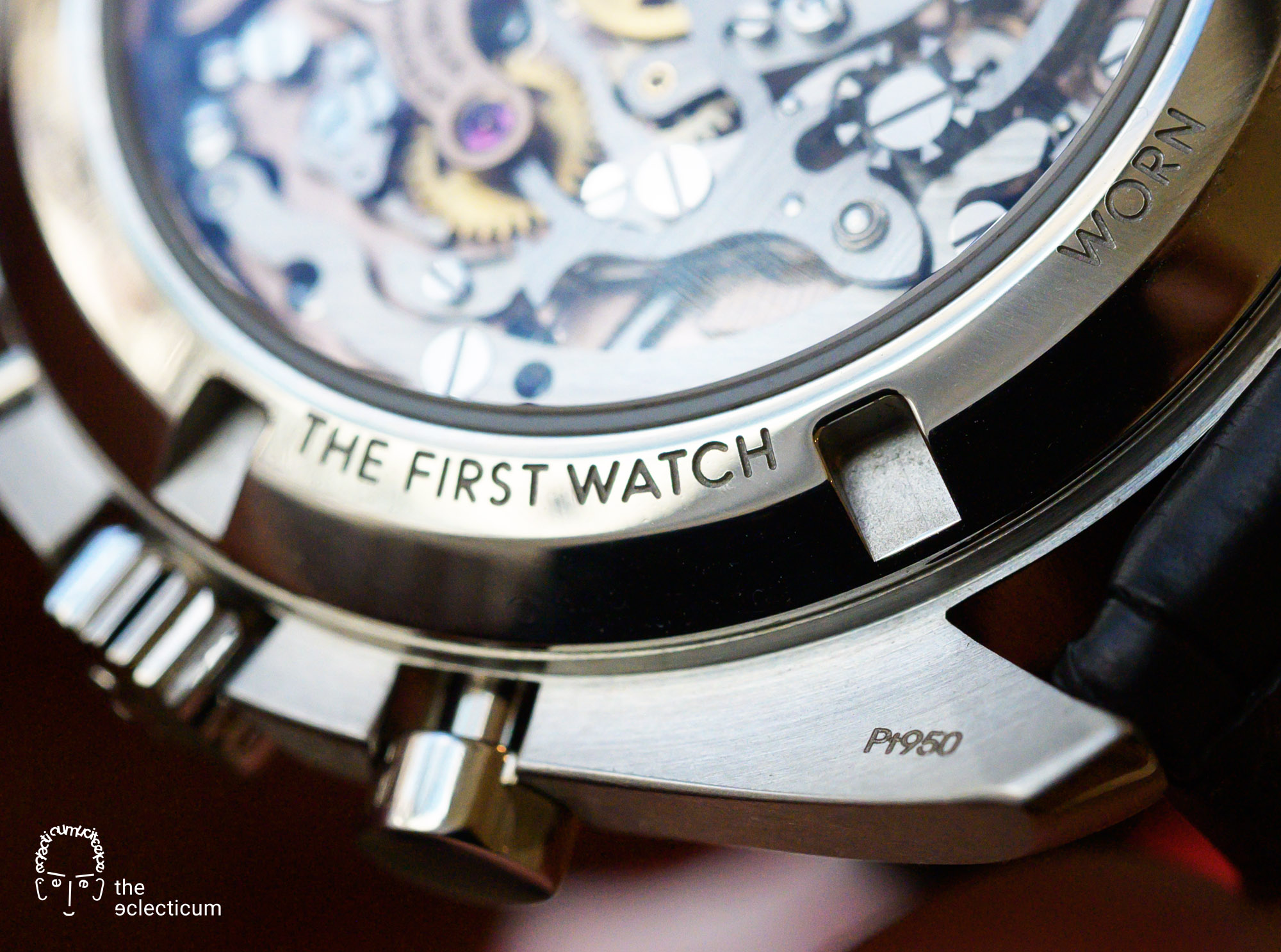 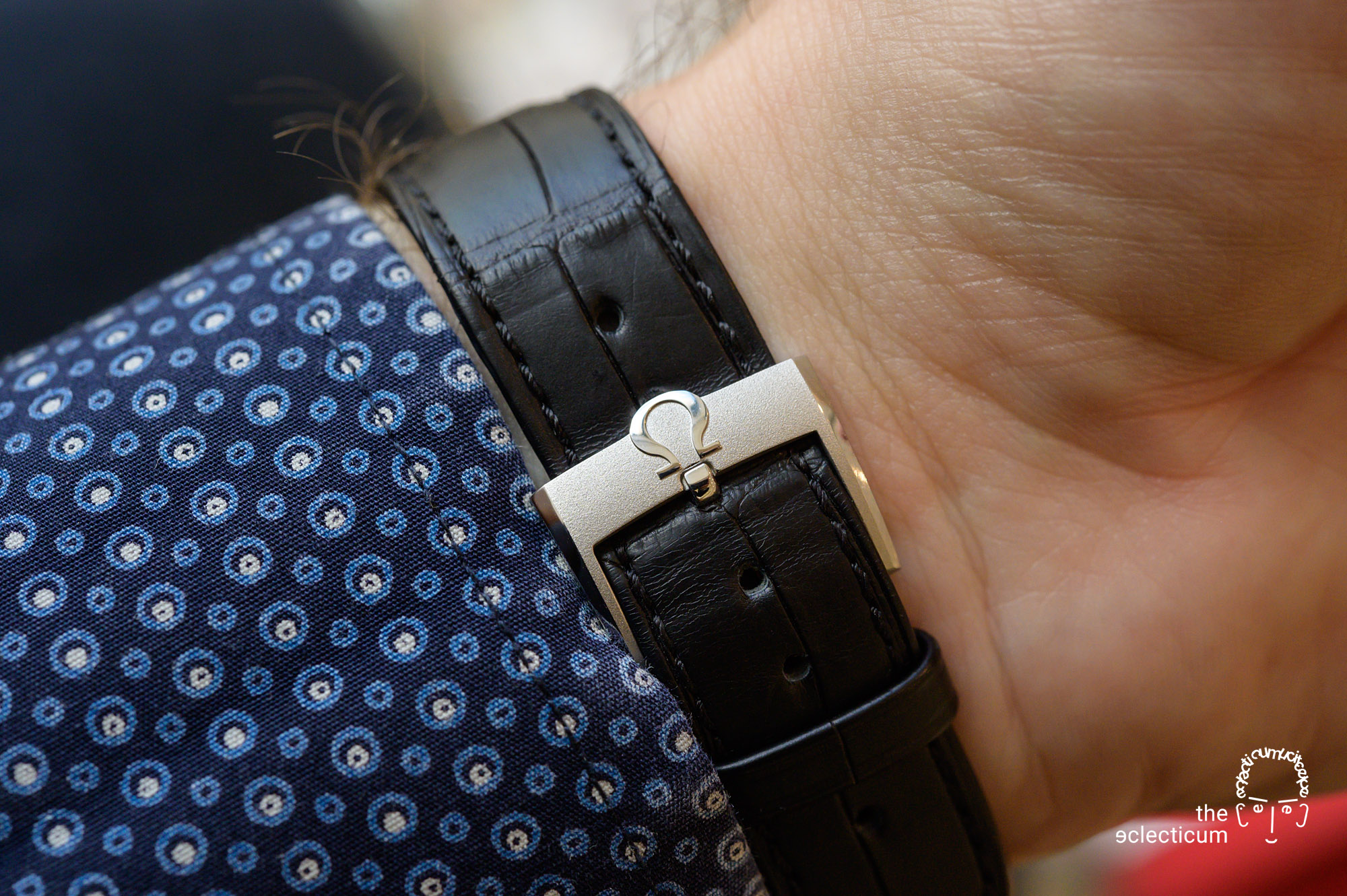 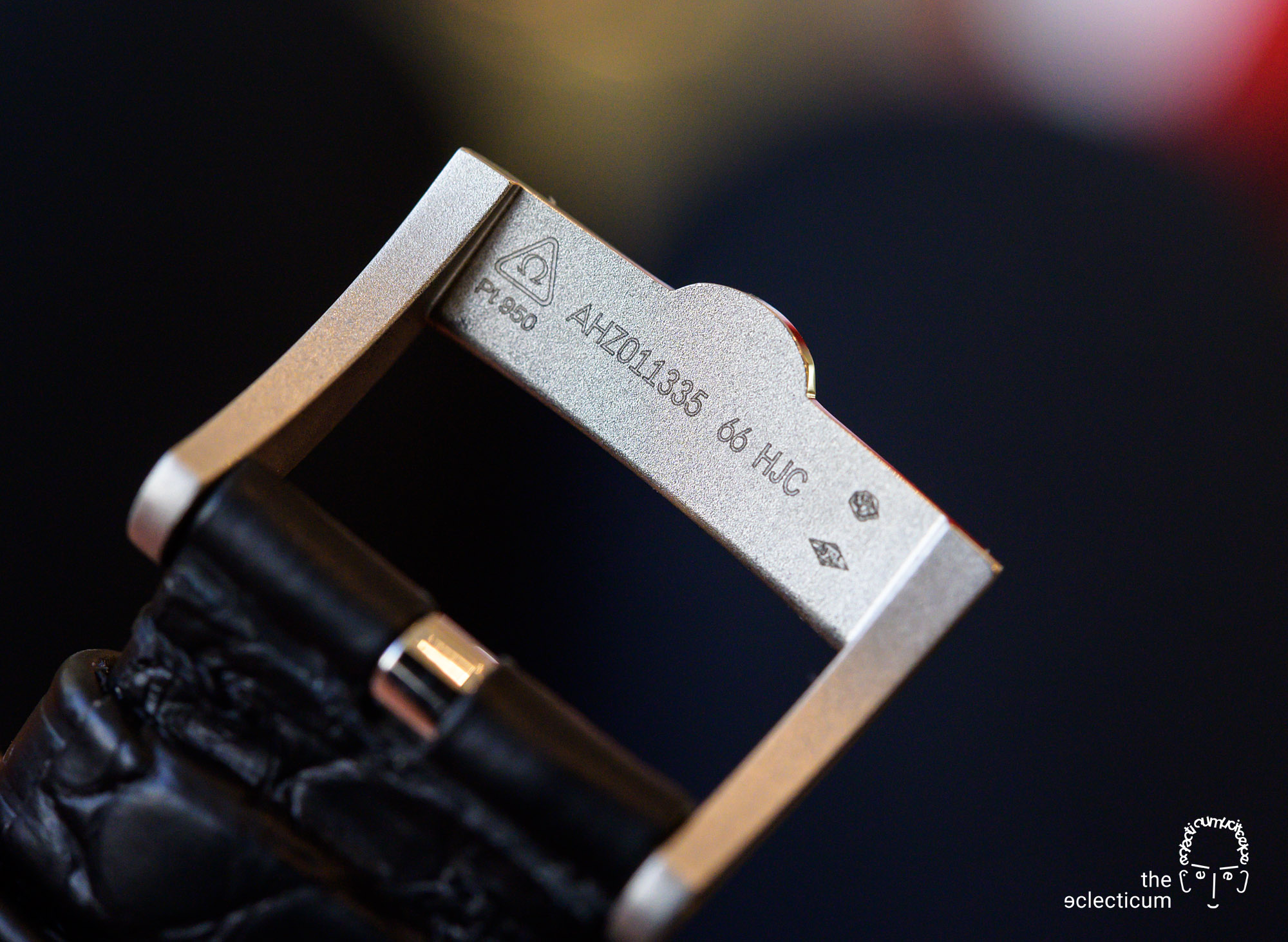 And if you pick it up – ‘ups’, that’s a surprise: its heavy, the 42mm case in platinum gives the watch a very truthful confidence-inspiring heft. But it does not stop here, wind the crown or, even better, operate the chronograph: the feeling is precise, well-rounded, with distinct pressure point – just as it should be. Certainly not surprising considering the original base movement, yet still noteworthy as pusher feeling is a function of many variables, besides the movement itself its pusher shape, tube construction, spring forces, travel distance and a lot of other aspects related more to the case. Which in turn means: the pusher feeling must have featured prominently on the specification table. And it shows! 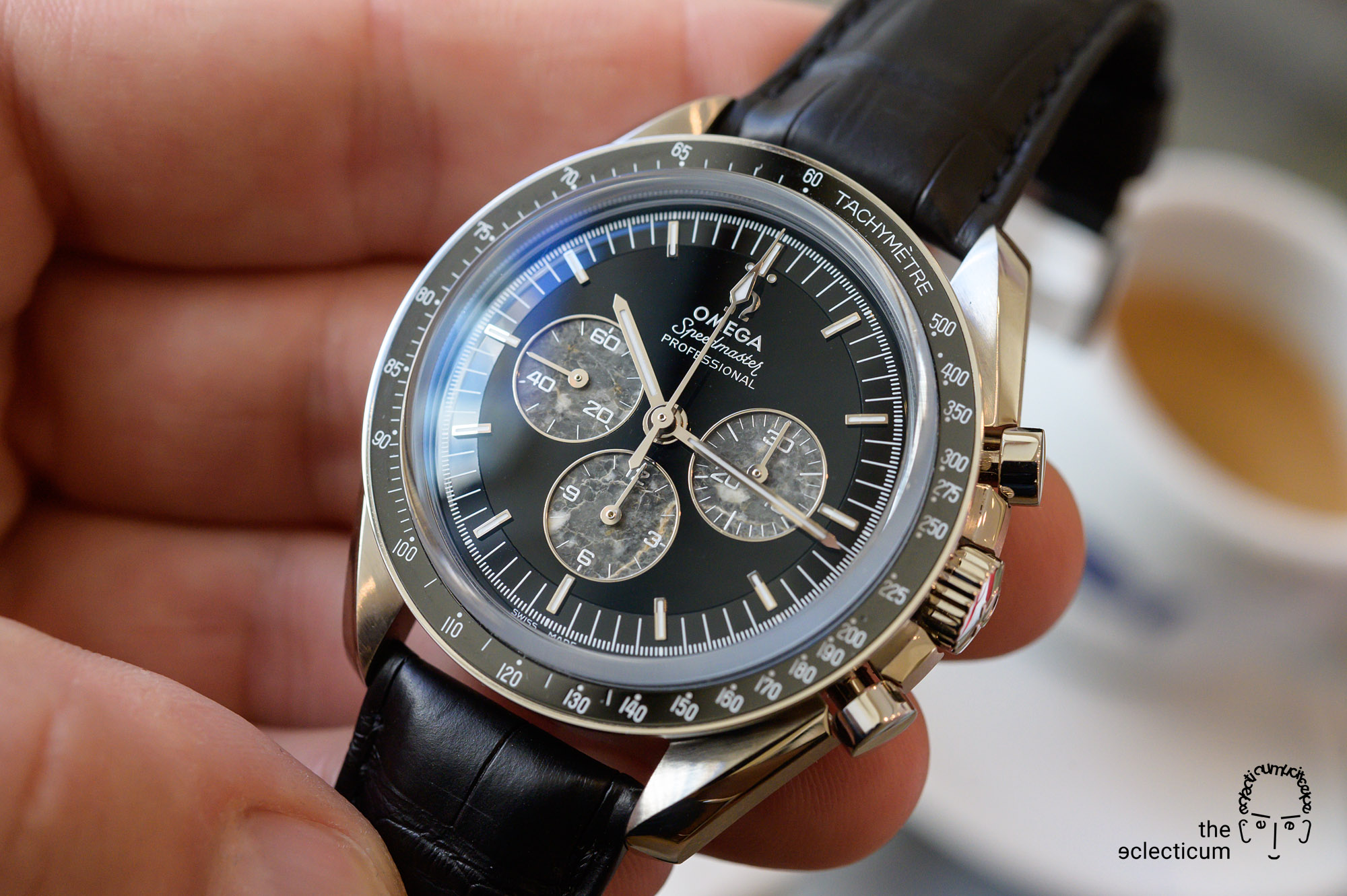 Second, there is the aesthetics: The stepped dial is crafted from onyx inlaid with meteorite sub-dials (meteorite of lunar origin, that is). At first sight, on press images, I found the latter a bit tacky to be completely honest. But once I handled the watch, I really appreciated the unusual choice, it lends a sense of balance and adds an additional structural layer to the otherwise bold dial. 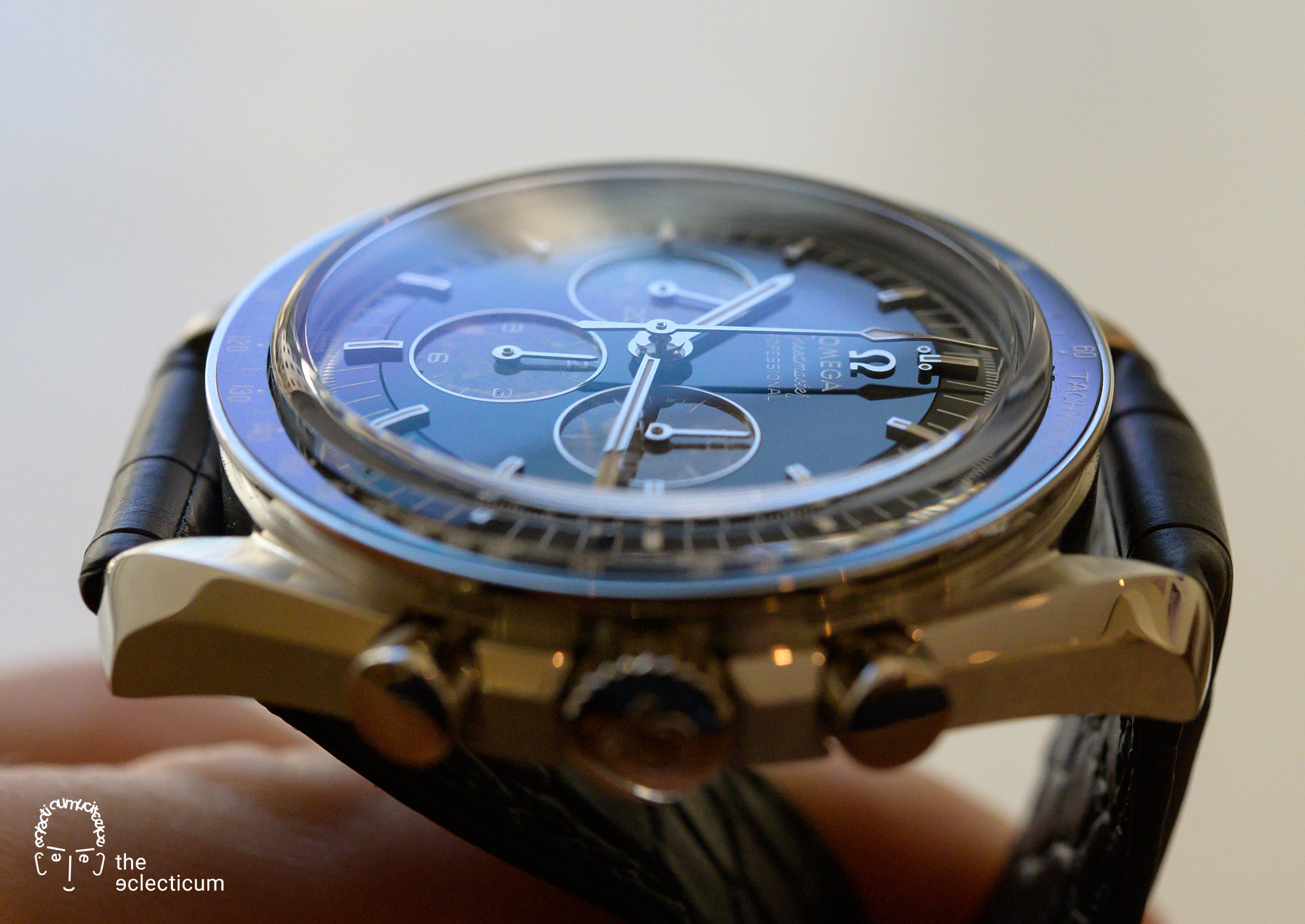 And bold it really is: onyx is a fantastically subtle material – it has a distinct surface structure and reflectivity, entirely unmistakable just like the respective effects of enamel or ceramic surfaces. OMEGA stroke the keys of surface texture expertly:  notice how precisely the onyx dissects the layers of the dial, how it examines the qualities of light, quite different to the ceramics of the bezel. And then the white gold indices and hands… 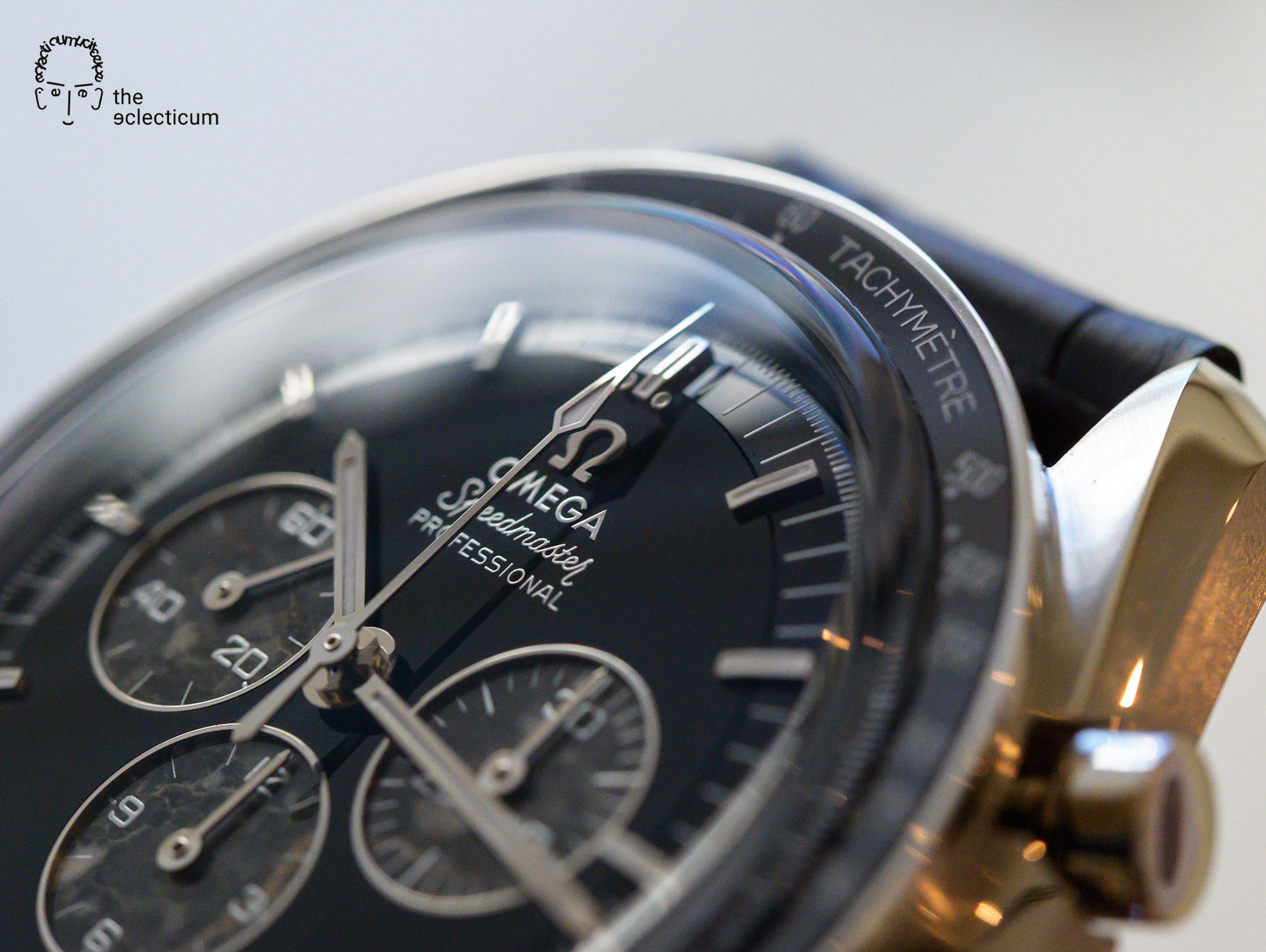 And even if you don’t go close into the detail – even at distance this watch never is the same, never is boring:

OMEGA shifts its own paradigm

So, reaching the ‘business end’ of this review, let me voice a few personal thoughts on the Speedmaster Moonwatch 321 Platinum: the watch, at first view, does not really fit into the OMEGA style of industrialised watchmaking: very traditional and supposedly more labour-intensive construction, made in a dedicated atelier, one by one all steps completed by the same craftsperson. 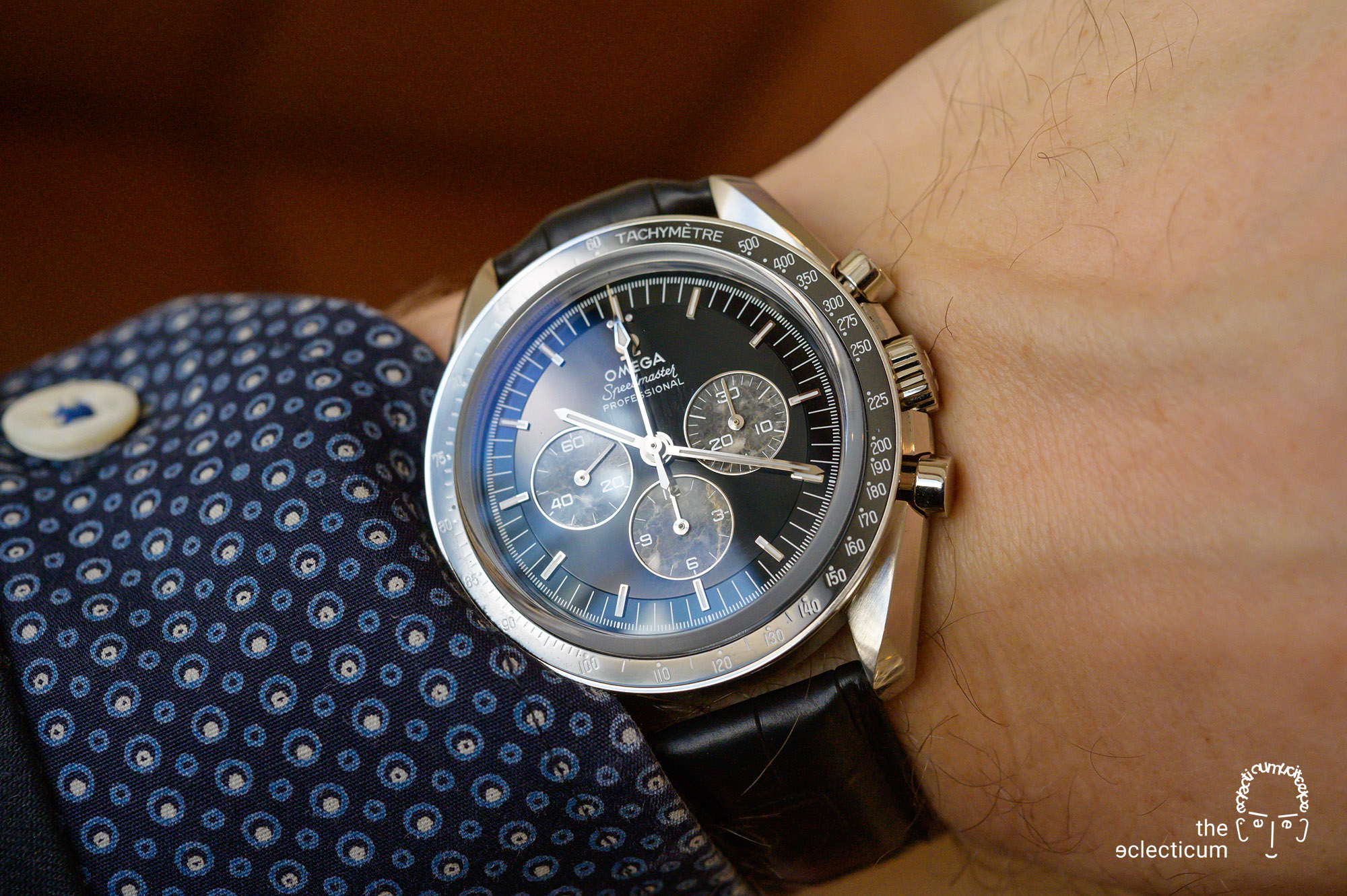 On the second view, all of the above subtly arranged details make it a very compelling offer to those savvy collectors who transcended the normal OMEGA offerings, who precisely know what they are getting, and who appreciate what it means within the context of OMEGA and beyond.

It is fitting, from this vantage point, that OMEGA opted against the co-axial escapement and also against the unmatched 15000 Gauss antimagnetic properties: those serve performance characteristics important to daily wearers and ‘tool watches’, but add little to the attraction of true collector’s pieces (I’d say I am not so sure this clientele would not appreciate a fine hand-made co-axial escapement, though). 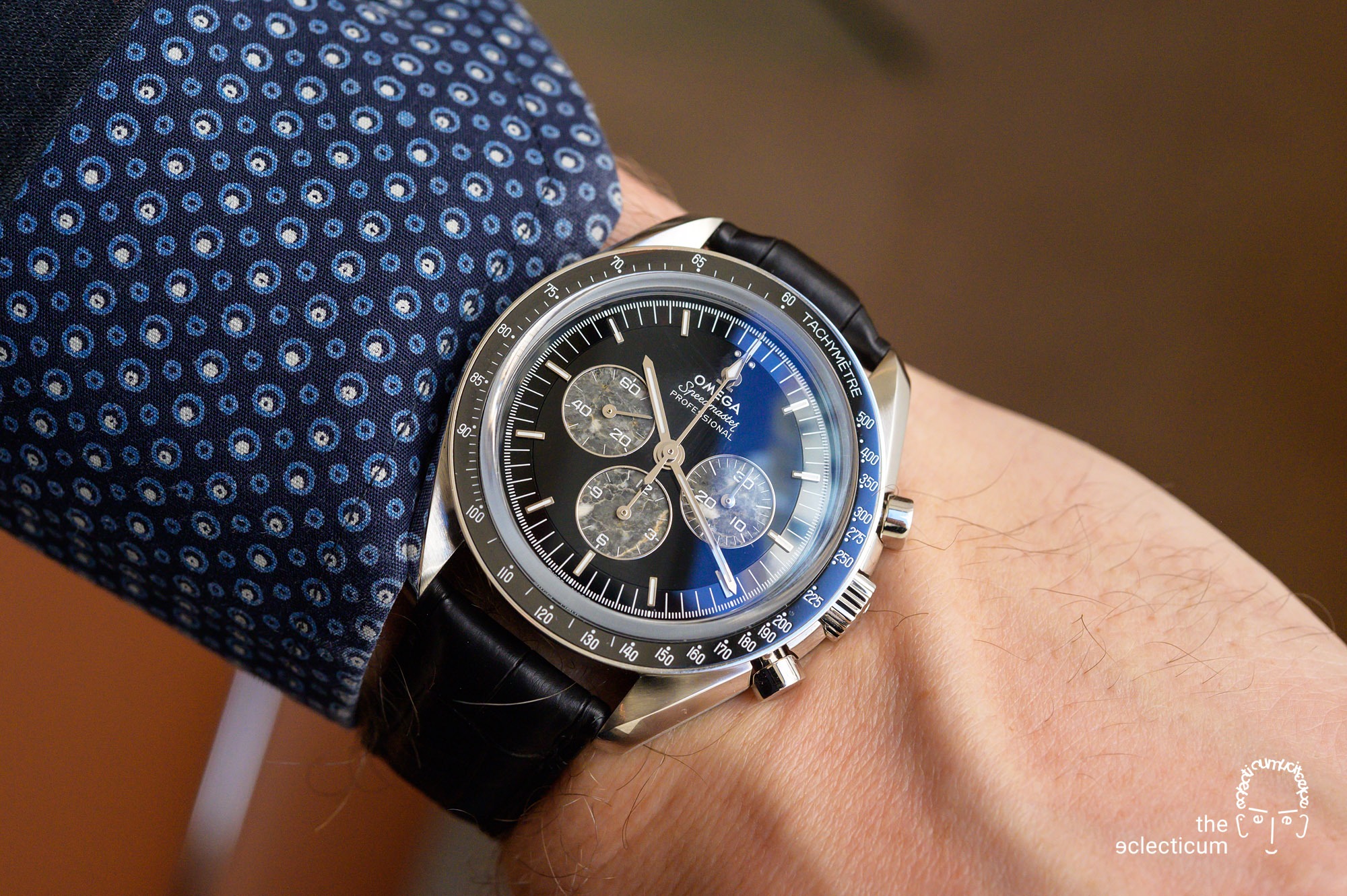 I am quite confident we will see more of such pieces down the line. The establishment of the dedicate cellule in OMEGA, the massive investments made, and the distinctions chosen all point to an avenue which is destined to be explored further, in fact I am certain this signals the birth of a new top segment of watchmaking OMEGA might want to explore – hopefully!

This is such a veritable gem!

P.S.: in case you like what you see but prefer ´Golf class`. Still there is a (smaller; 39.7mm) steel version with the same cal. 321 and also produced inside the same dedicated cellule, which is pretty much like a ´Golf R` 😊