Ever since I saw this Minerva Pythagore at the manufacture in Villeret I was on a hunt – only more than 5 years later I found one – in my backyard! 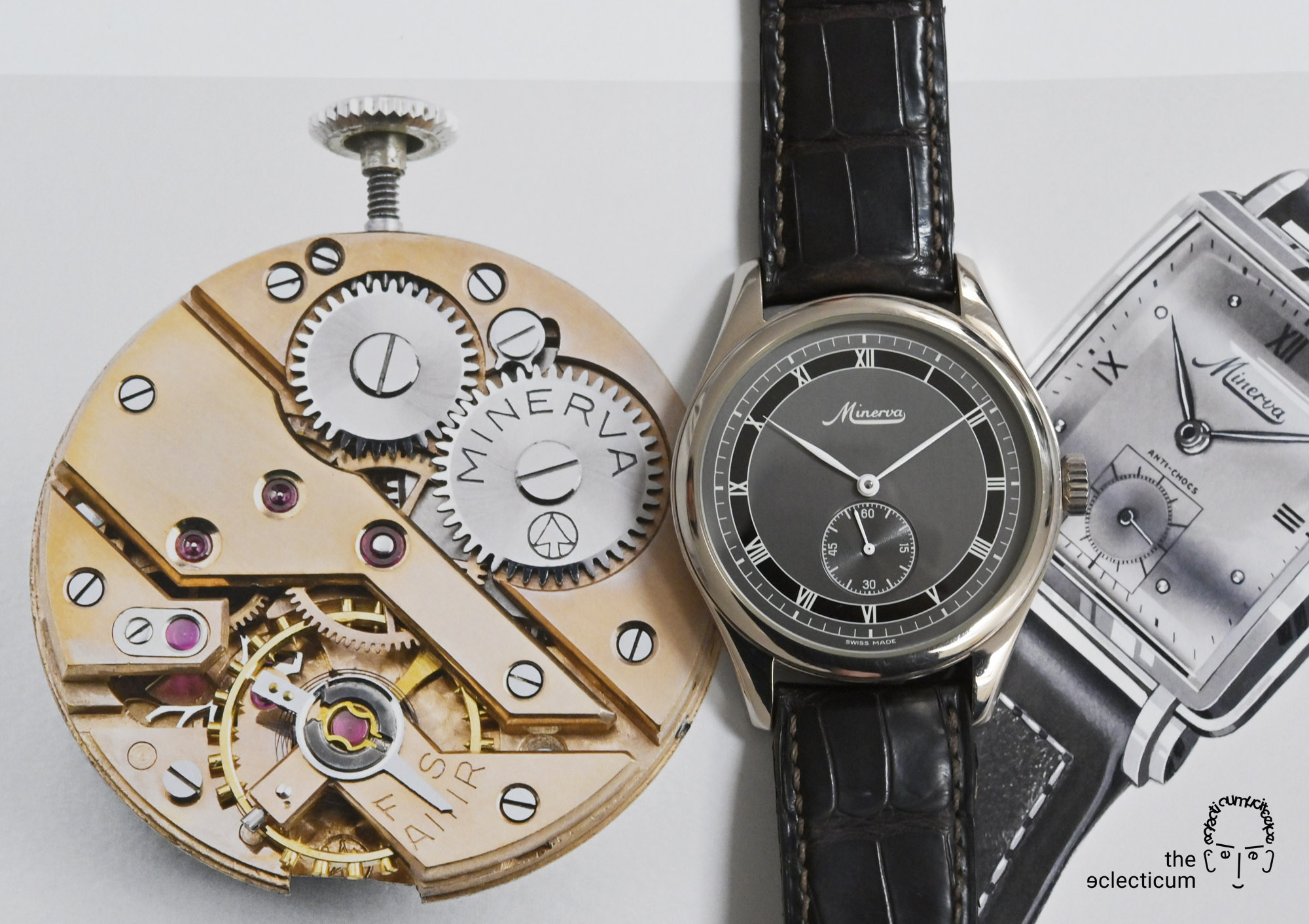 Many of us might still remember back then at the turn of the millennium. The watch industry was quite different back then, A. Lange & Söhne a mere 5 years old, and together with Jaeger-LeCoultre and IWC was on brink to be sold to Richemont. Internet watch communities such as TimeZone or PuristS were thriving, but the watch industry at large was sceptical (to say the least) towards those nosy online nerds. 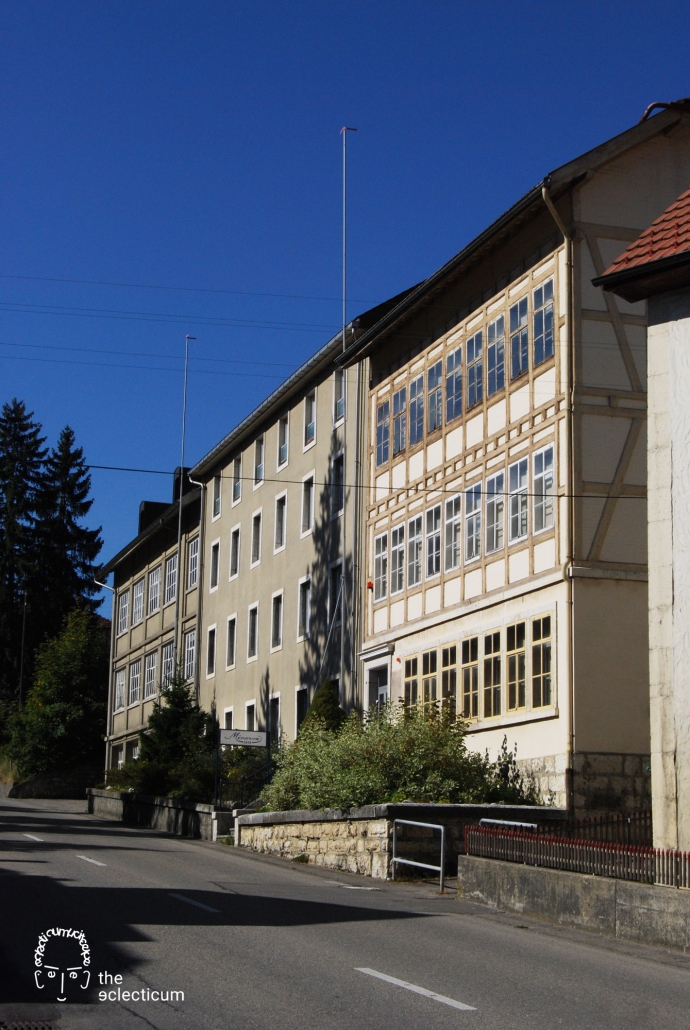 (The Minerva factory building in the mid-2000s) The small industrial town of Villeret in the French-speaking Bernese Jura mountains was home to an equally small manufacture, Minerva, a watch company famous for its chronographs and stop watches (an overview on the history of Minerva from foundation to its integration into Montblanc have been given in Alessandro Mazzardo’s article). The company was run by a father and son team, André and Jean-Jacques Frey. Minerva was one of the first watch companies which opened their doors to internet collector groups, a decision which made them a darling of these collector groups (that appreciation was further solidified by the reasonable prices for Minerva watches).

Minerva boasted of a considerable vertical integration and a lack of financial resources (to put it mildly) – but it had one ace in its pockets – the hand-wound Cal. 48, constructed according to the rules of the Golden Ratio:

The Minerva Cal. 48 is a no-nonsense, honest 24.0mm movement with a twist: technically nothing ‘special’ it is the design of the bridges which draws all the attention: with all straight shapes of its bridges, the individual dimensions follow the rule of the Golden Ratio, i.e. they have a relation of 1: 1.61803398875 to each other. 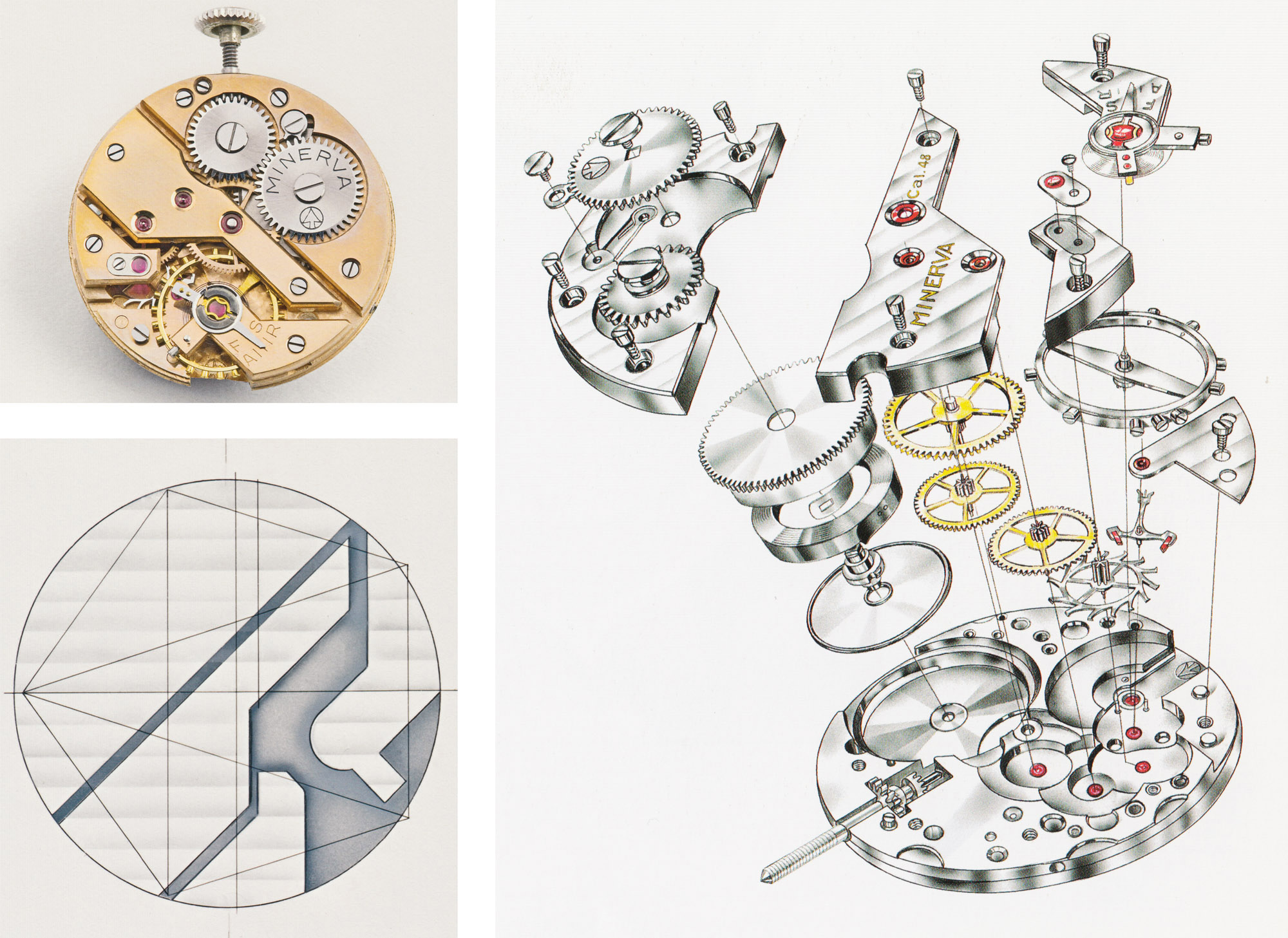 André Frey constructed the movement in 1943 with a clear layout using only straight lines arranged in 45, 90 or 0 degrees towards each other. It was also available with an indirect centre seconds (Cal. 49).

Over the decades there was almost no improvement applied to the movement. It always kept the same layout and the same screwed balance wheel, the only changes were that over the years a fine finishing option as well as swan’s neck microregulator could be specified.

Minerva marketed this movement in an elegant and very reasonably priced watch aptly nicknamed the Pythagore. I still have a catalogue from January 2000 at home that states a price starting at CHF 1400: 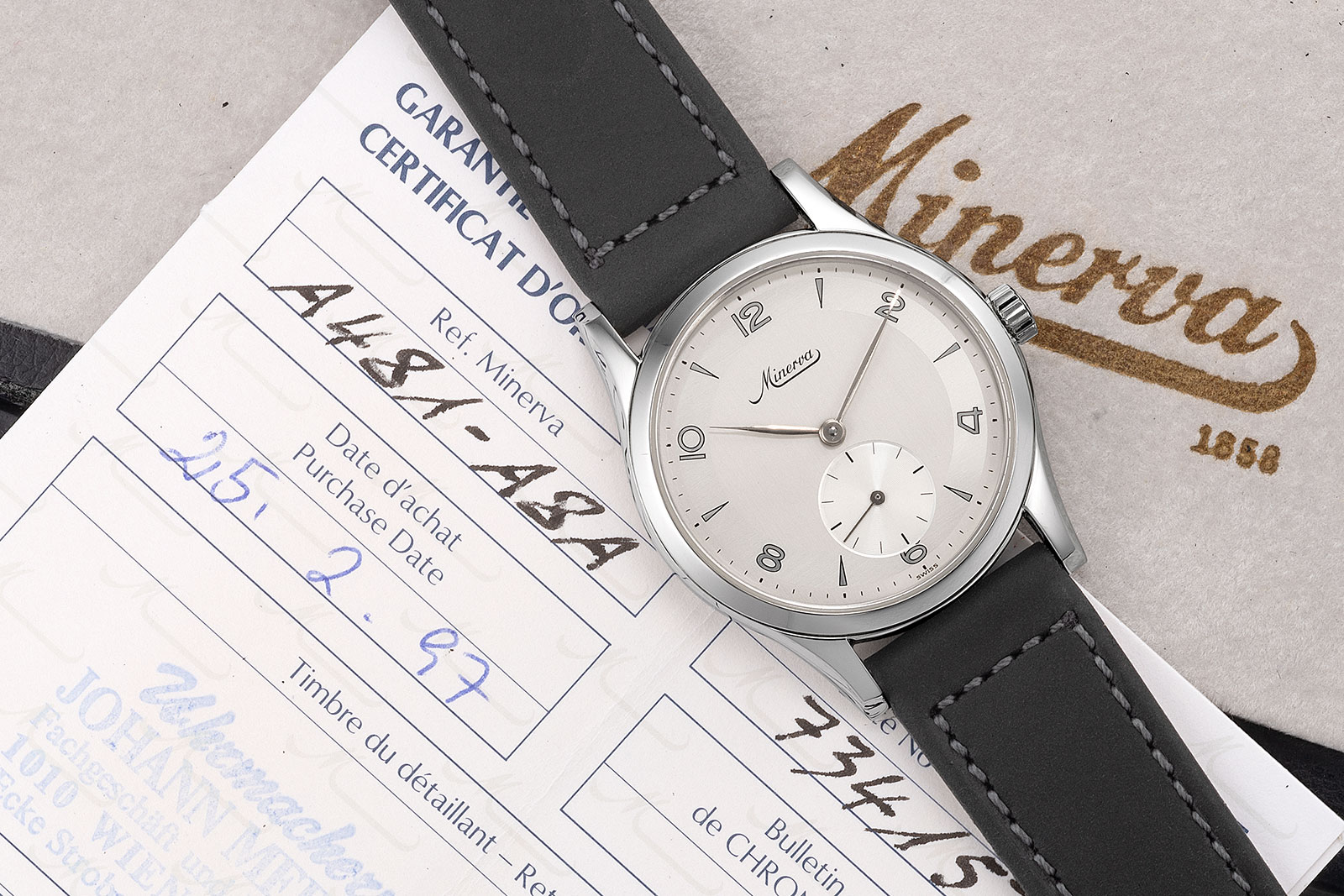 (Minerva Pythagore 34mm: image © Phillips) The lack of financial resources prevented the Frey family from investing in infrastructure and product development. Ultimately in 2000, the company way sold to an Italian financier named Emilio Gnutti, and with him came Beppe Menaldo as CEO and Demetrio Cabbidu as the head of the technical department.

The team followed an ambitious plan: to bring the manufacture to the same level of refinement and competence as Patek Philippe, and they now had the necessary backing to execute. Any they did, and the result were all the fine movements we now see as the base for the topmost rank of Montblanc watches (under Mr Menaldo Minerva invested heavily in infrastructure and manpower, but in the end had no funds left for marketing. The brand was ultimately acquired by Richemont and integrated into Montblanc, but that’s another story). The prices Minerva asked for were according the new watchmaking standard, but unheard of for a Minerva. Collectors could not believe what happened, and the former love for the brand turned into the opposite.

It was in later summer 2005 when I decided to pay a visit to Minerva. Given the above change in attitude towards the brand arranging this was not easy, and the first thing I had to do when I arrived was to justify my intentions – they feared another slap in the face. That aside, the visit turned into a fantastic day full of olde worlde watchmaking delights.

And then I saw these: 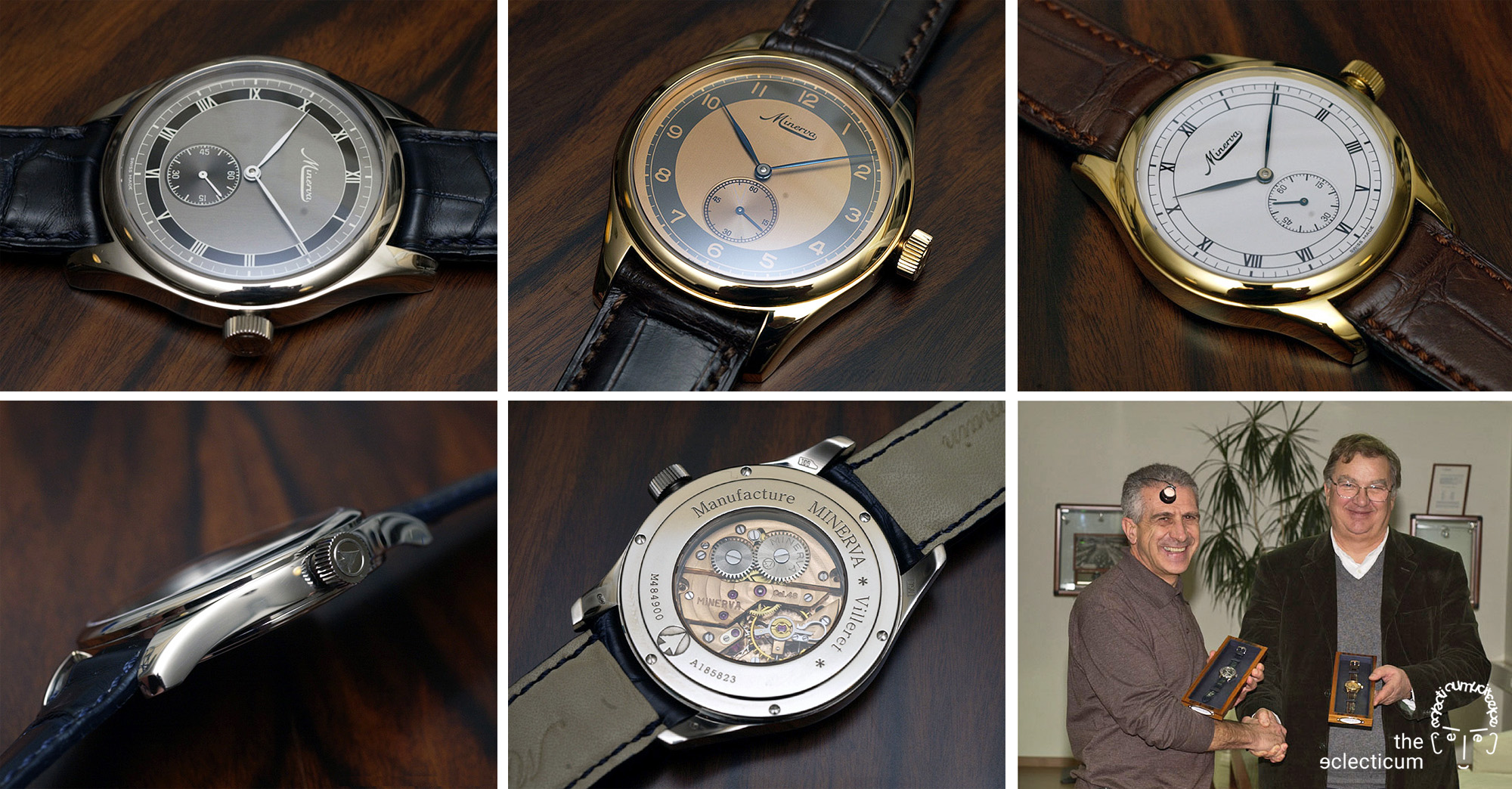 (Minerva Pythagore 40mm in white, red and yellow gold; Demetrio Cabbidu (left) and Beppe Menaldo (right)) These were stunningly elegant pieces in 18kt white, red and yellow gold with cases that were modelled after original vintage Minerva ones. Sure, the Cal. 48 movement was a bit small for the 40mm cases, but it retained its essence, just now with a lovely finishing and a gorgeous red gold galvanisation. I was hooked immediately, and knew the search would begin momentarily…

Whatever, my efforts, my permanent searches had no success whatsoever, these 40mm pieces seemed to be made of unobtanium!

Fast forward to the year 2011: strolling through eBay I noticed a Minerva listing: 40mm, white gold, … and in Vienna! I contacted the seller, quickly arranged for a viewing, and the rest is history: 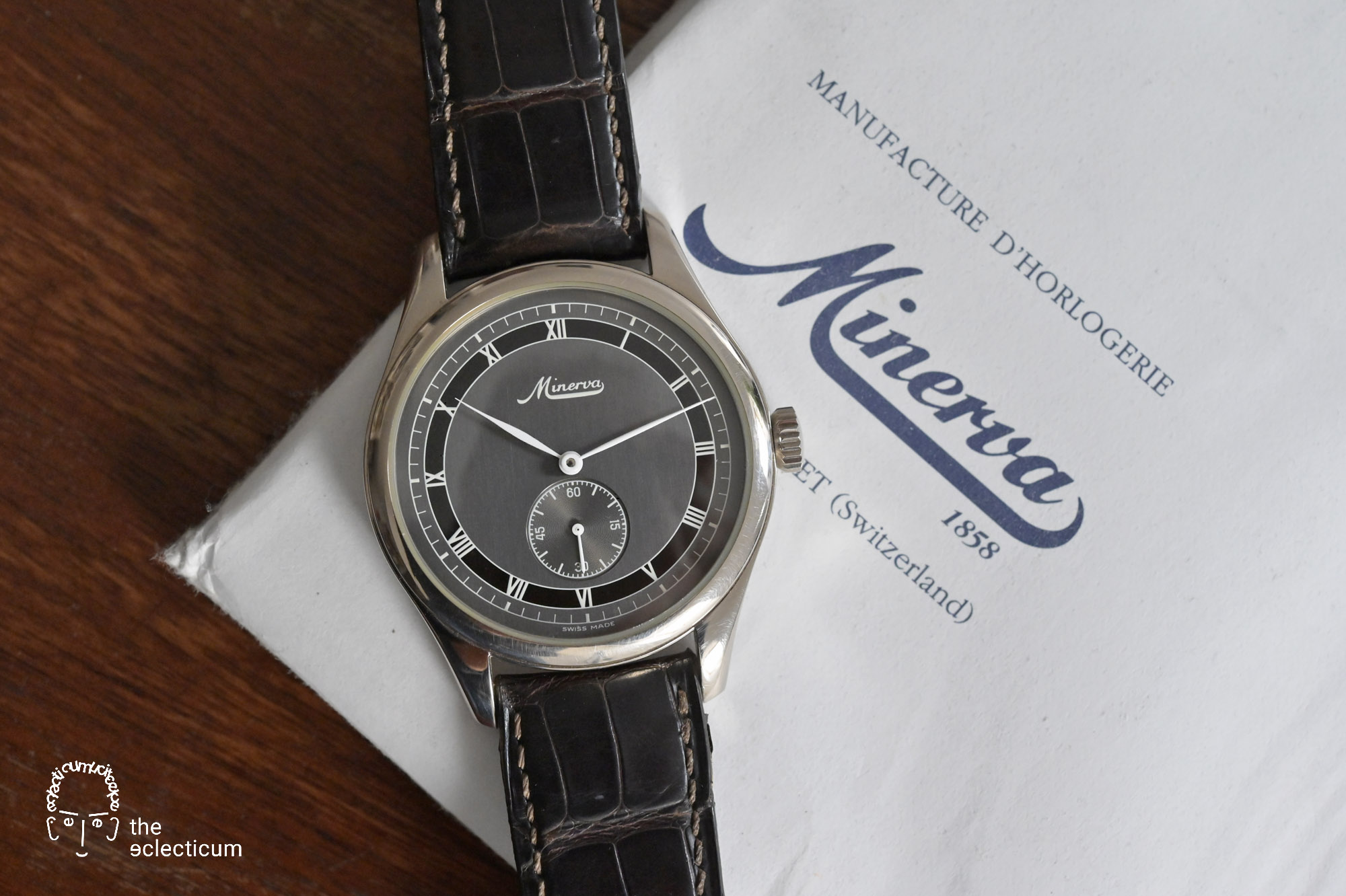 Here it was, my dream had come true: a 40mm Minerva Pythagore, one from a limited edition of 50 pieces created in 2001 (but rumours have it that ultimately less were made).

The entire design is a faithful modernisation of one of the original Minervas, with a sector dial, the original logo script and also the original leaf shaped, simply white lacquered hands: 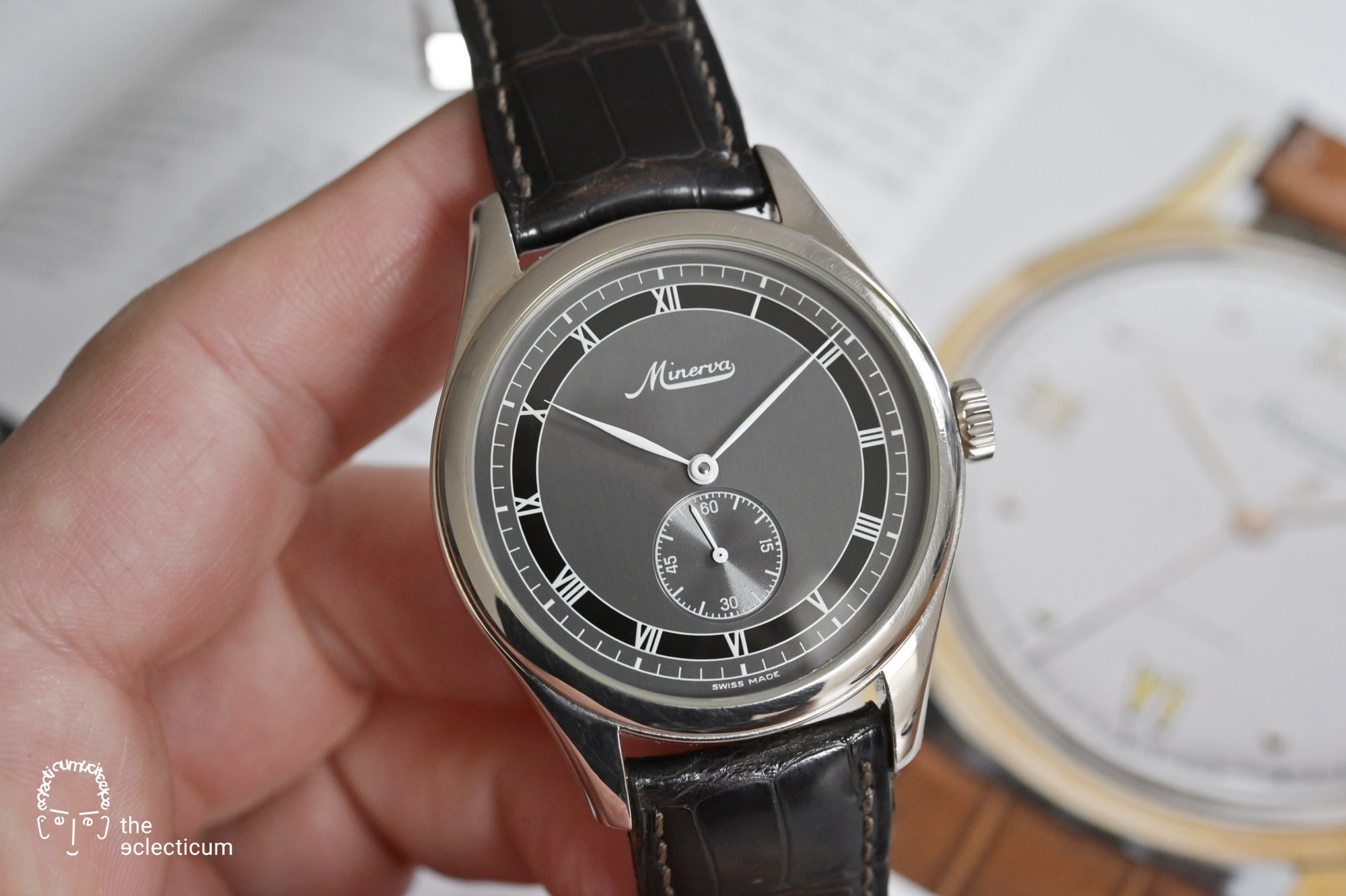 The printing quality of the dial btw is superb: 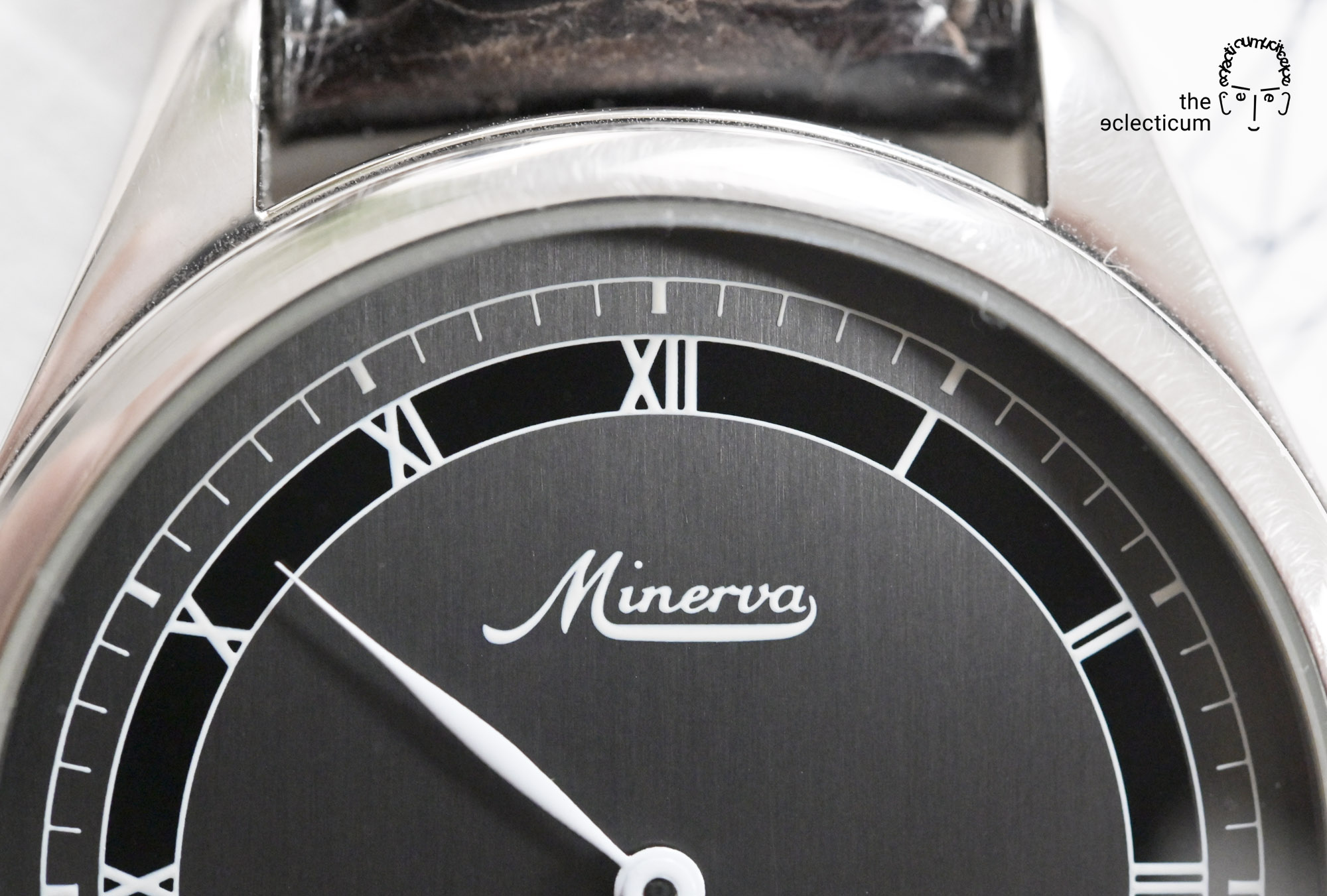 Now, as mentioned already, there is an undeniable mismatch between movement size and case diameter. Hence, the small seconds hand sits almost in the middle between dial centre and periphery, but I think particularly in this case I guess the benefits of not cutting into the hour ring outweighs some purists’ concerns.

This becomes apparent if you appreciate the different shades of grey, the various textures (plain (hour ring), vertical brushing (dial centre) and circular pattern (seconds dial)) – they are nicely composed in relation to each other, as if Mr Menaldo and Mr Cabbidu wanted to extend the Golden Ratio concept aesthetically to the front: 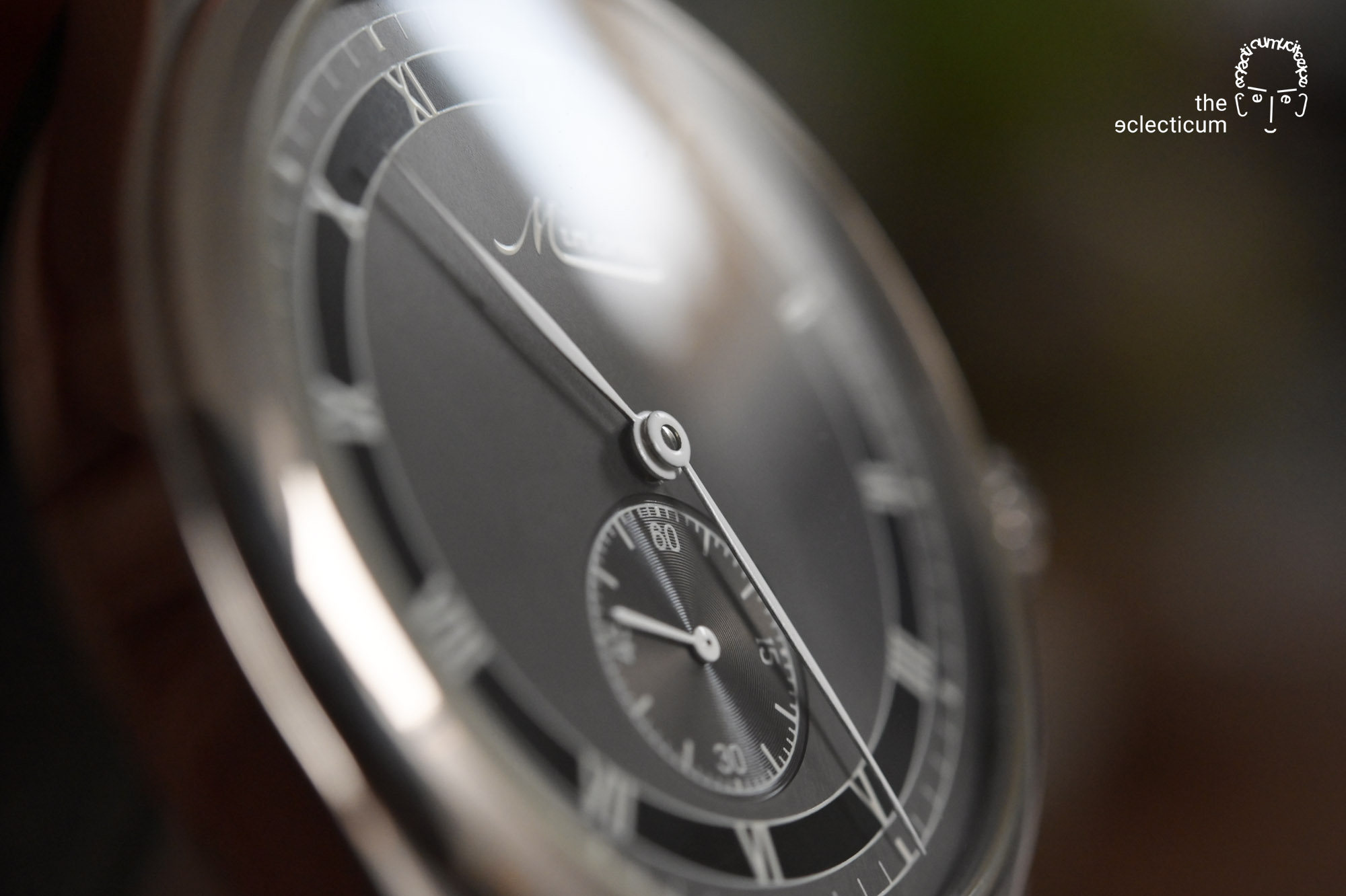 Which brings me to the back side – the lovely Minerva Cal. 48 in the nicest execution ever made: 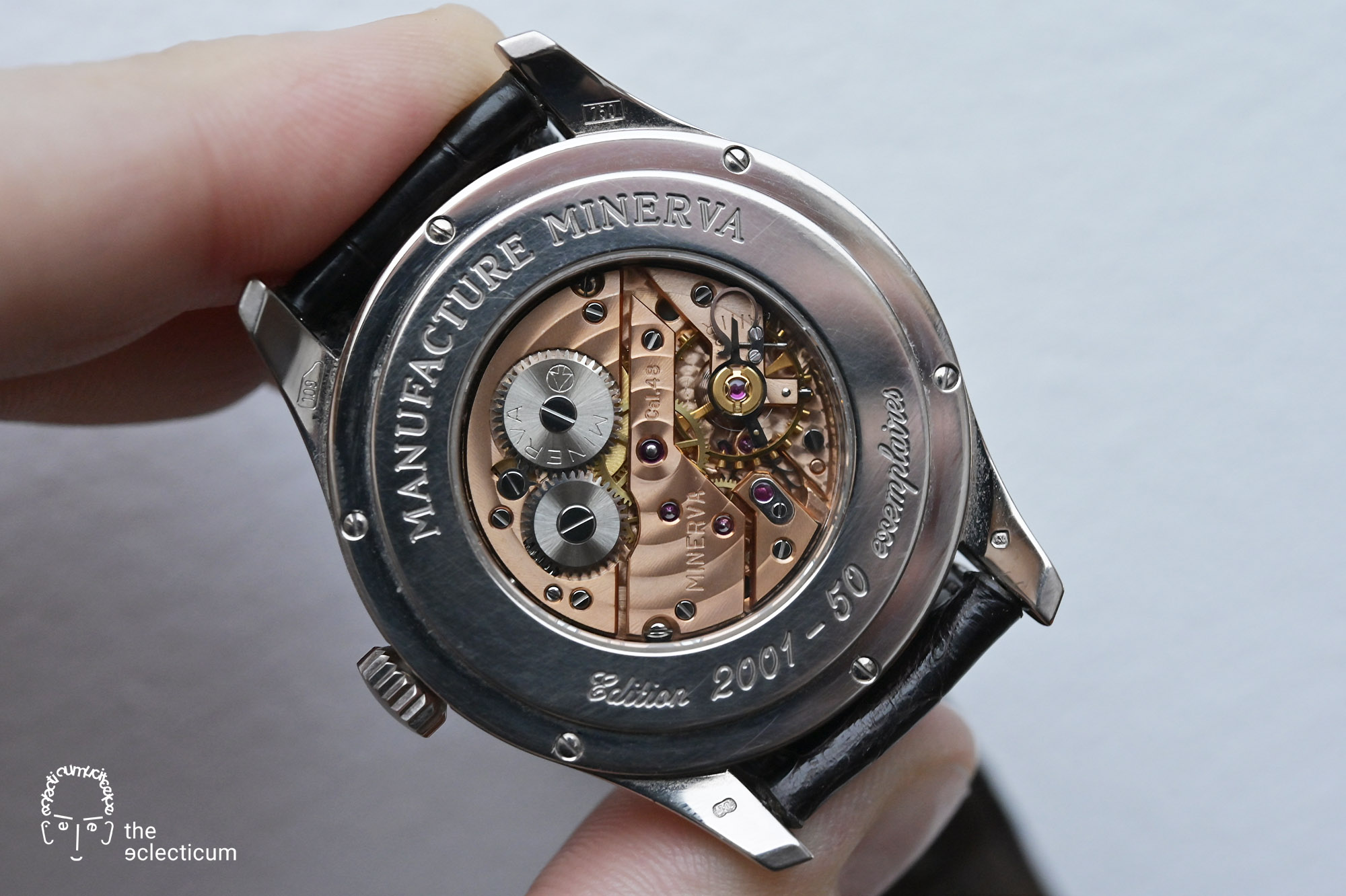 Minerva opted for a fine circular striping applied with boxwood, a good (but not ‘perfect’, as far as I can tell) anglage, rose gold coating and a swan’s neck microregulator – note also the numerous poising screws on the balance: 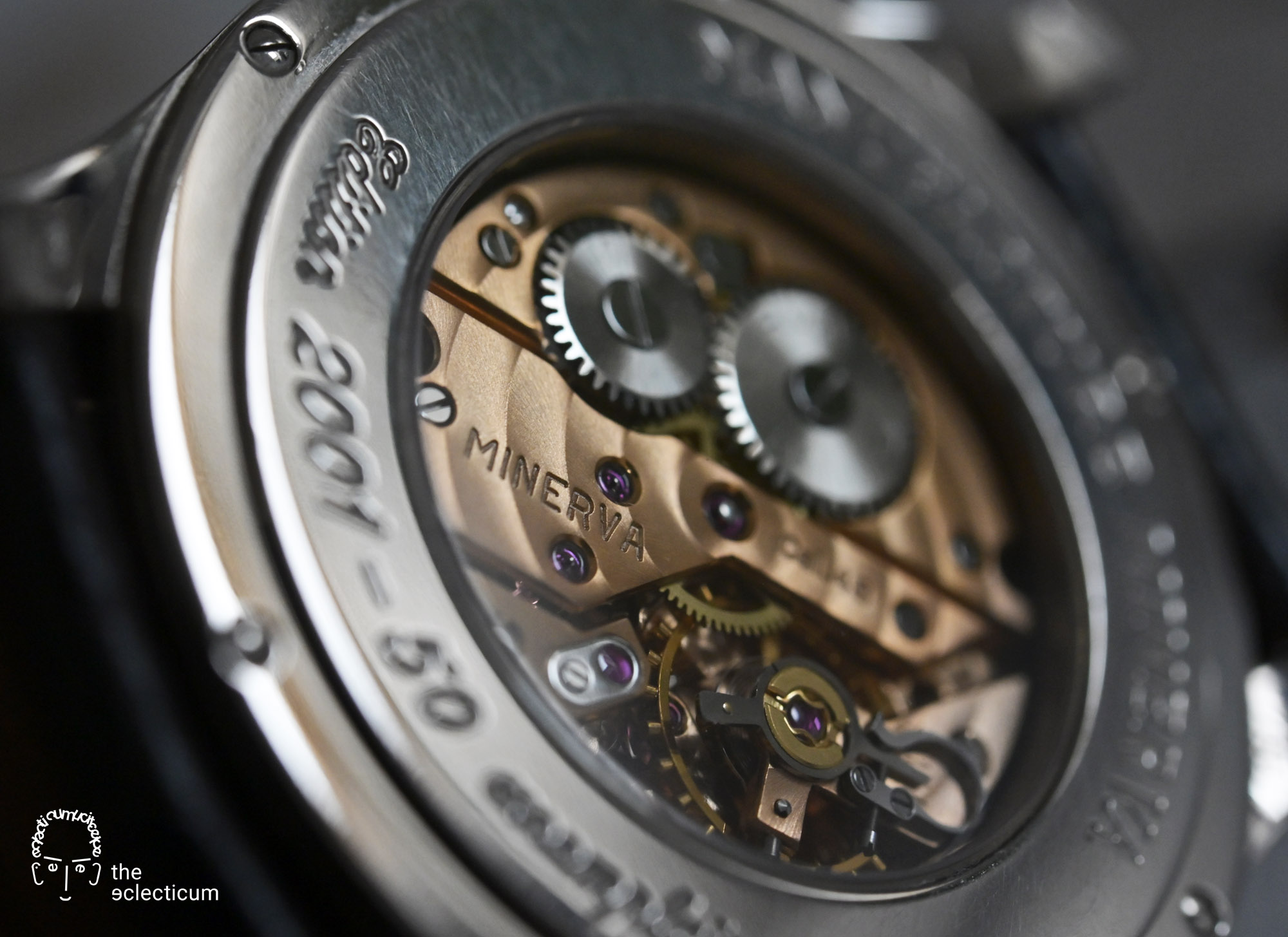 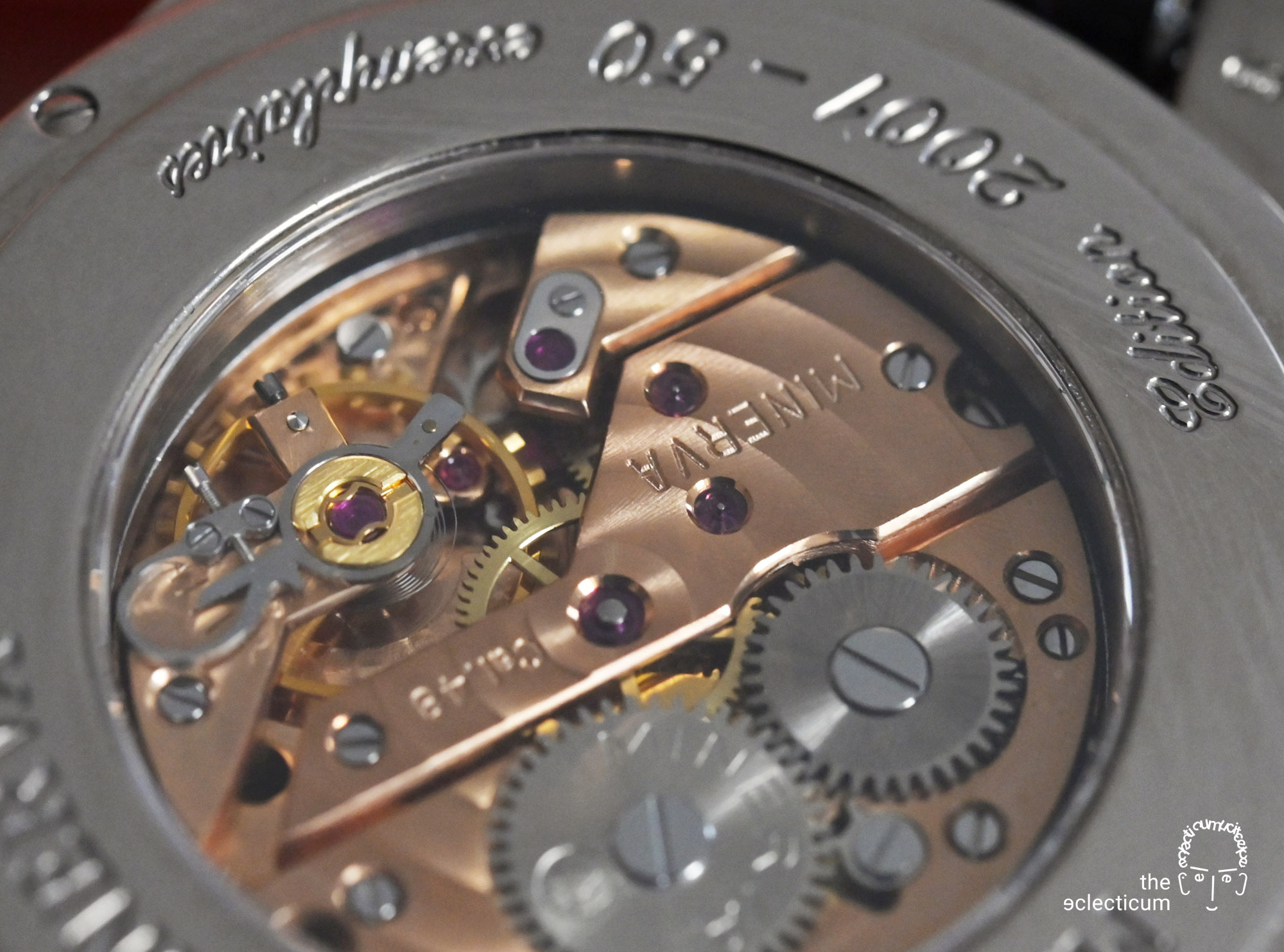 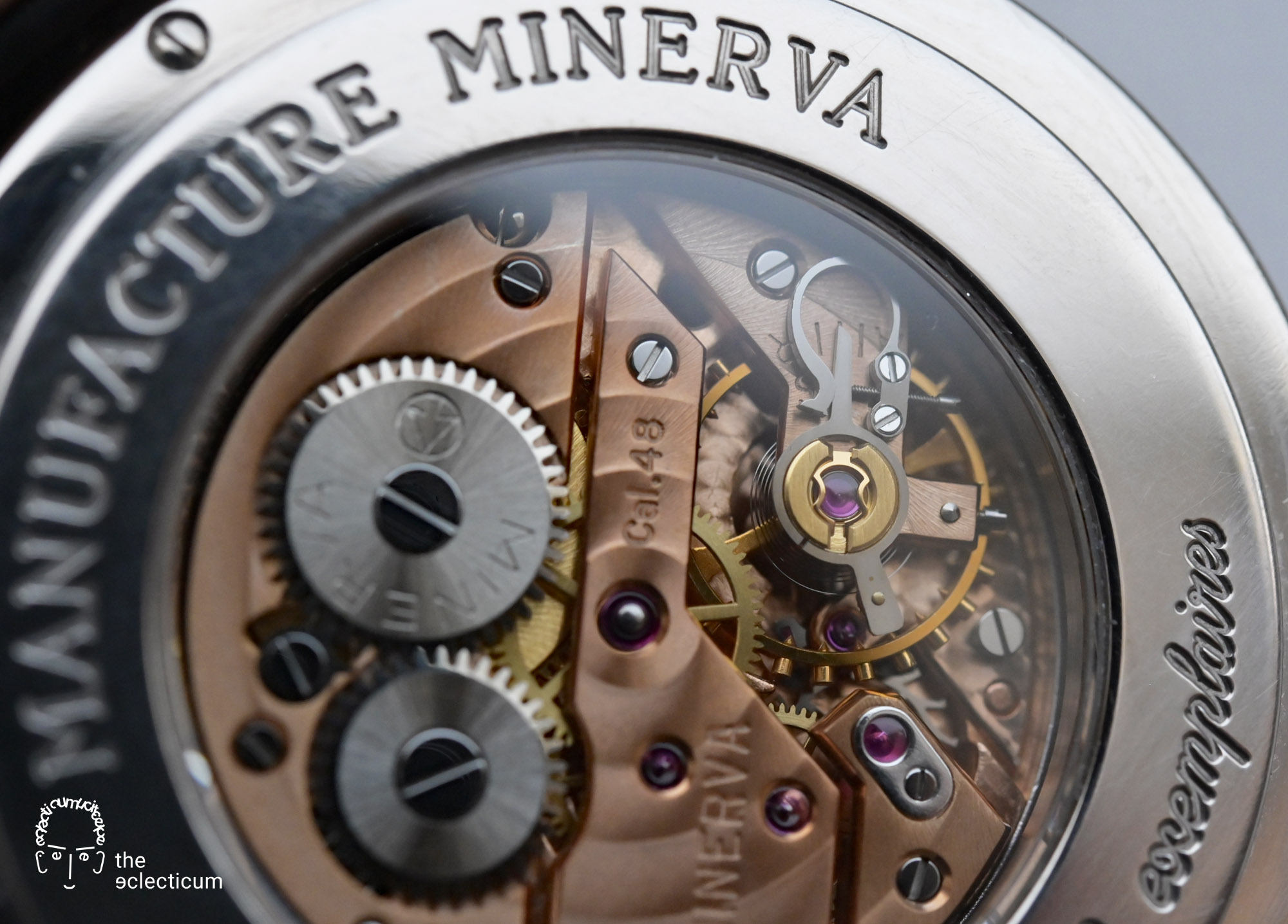 All of this is appropriate to the construction of the movement, not too much, but still corresponding to the historical importance to the movement. 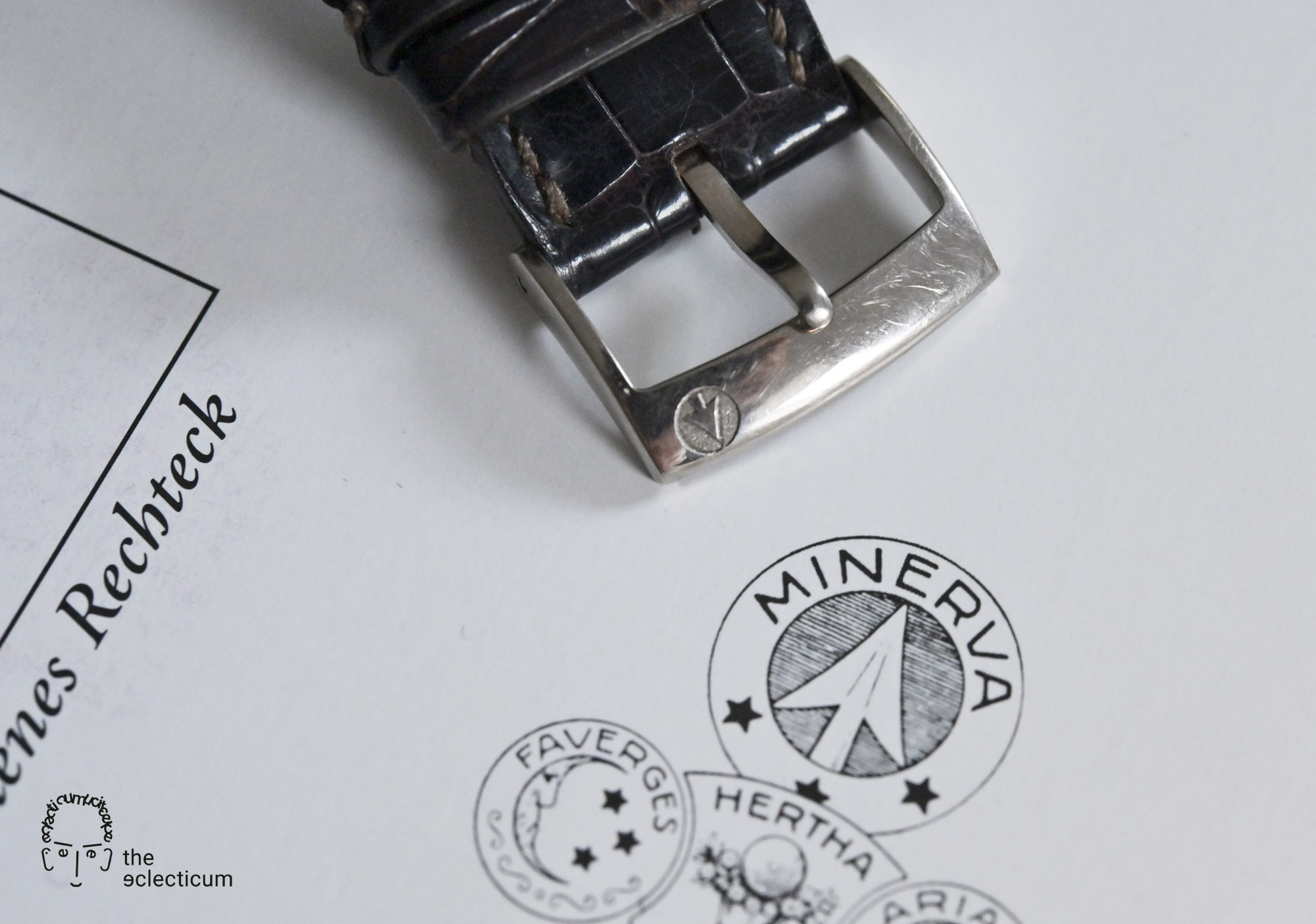 (The white gold buckle carries the traditional Minerva arrow logo) The Minerva Pythagore 40mm is one of the rare transitional pieces – made during a time when the brand tried to elevate itself from its past, but had not yet found its new definition. The watch speaks from the ambition of the manufacture to join the ranks of the most respected watchmakers, before ultimately the Italian owners realised that this goal could not be achieved on their own.

After this watch was developed, the Minerva team set out to rework their movements, including the Cal. 48, entirely, with new luscious bridges, in-house hairsprings and excellent finishing, and housed them into elaborate cases. 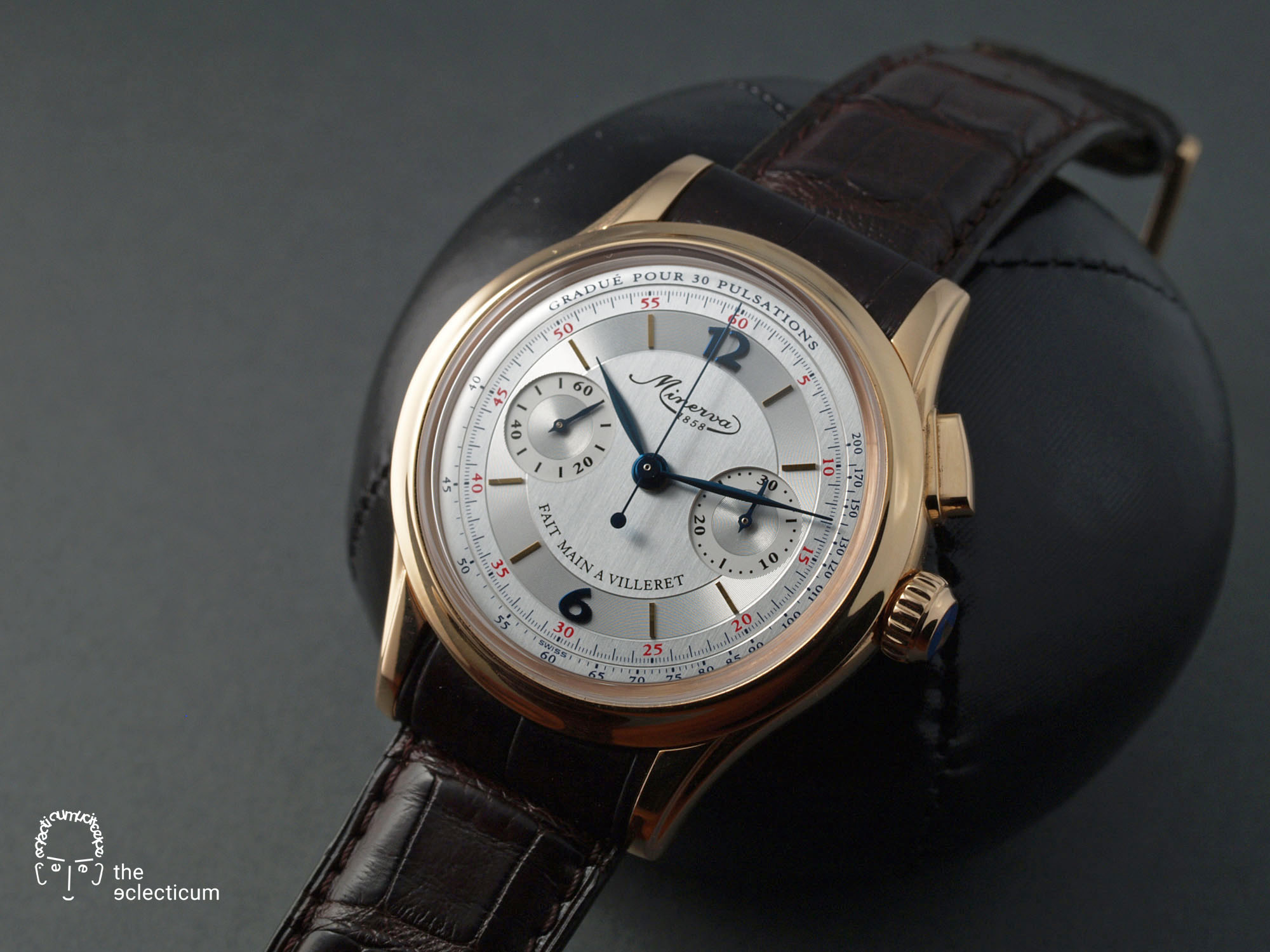 (Minerva Monopusher Chronograph with Cal. 31-21) Those were the last Minervas that carried the famous name, but they lived on after the manufacture was integrated into Montblanc (the watches then carried both ‘Montblanc’ as well as ‘Minerva’, the former on the dials, the latter on the movements).

In this context, the Pythagore 40mm carries a lot more history than its movement alone. 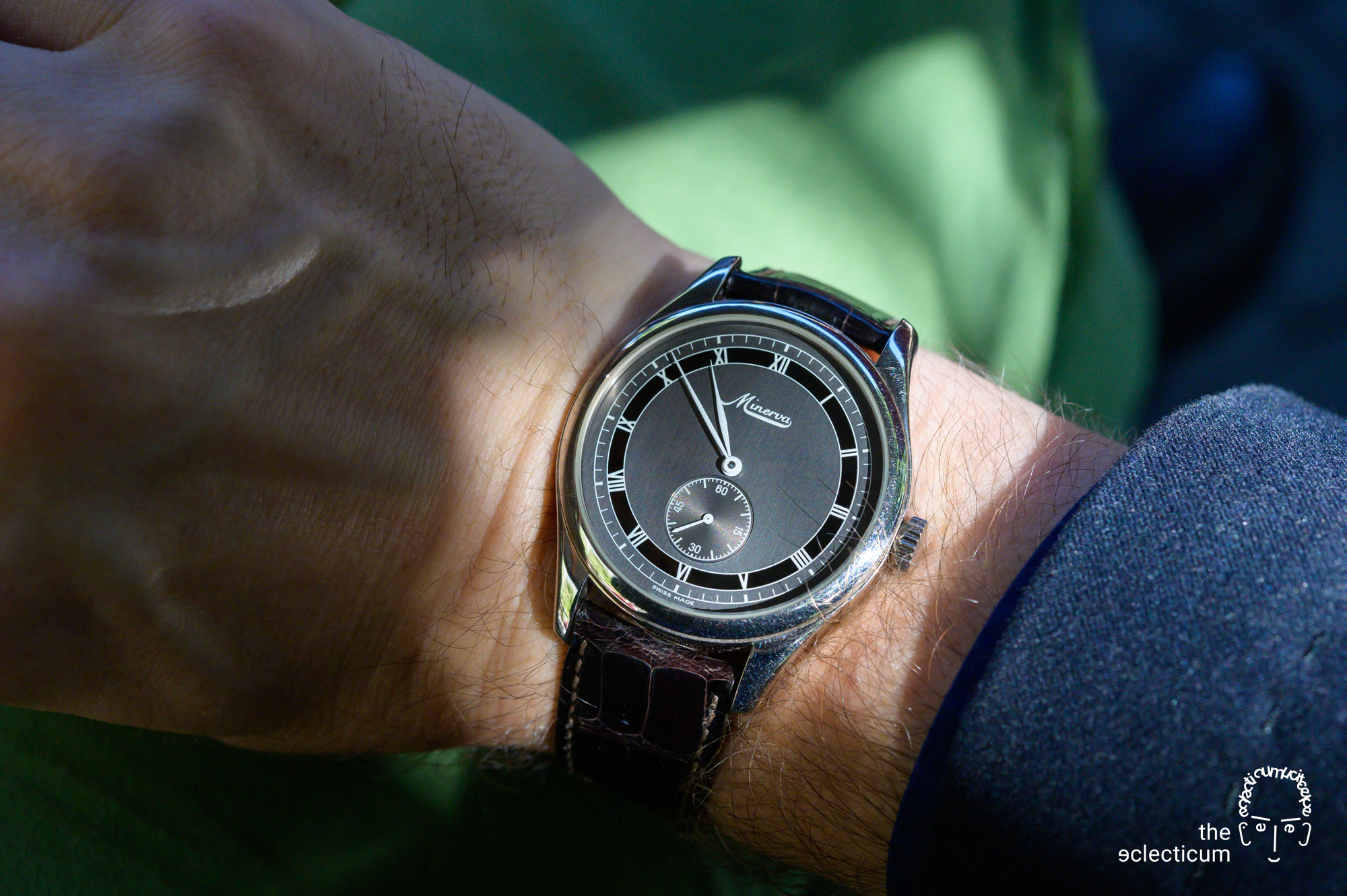 International Women’s Day: Exploring the female side of watchmaking!