Jerôme de Witt’s creations are for the open-minded, seasoned collectors, for those who value a look behind the obvious – as the Academia Mathematical shows 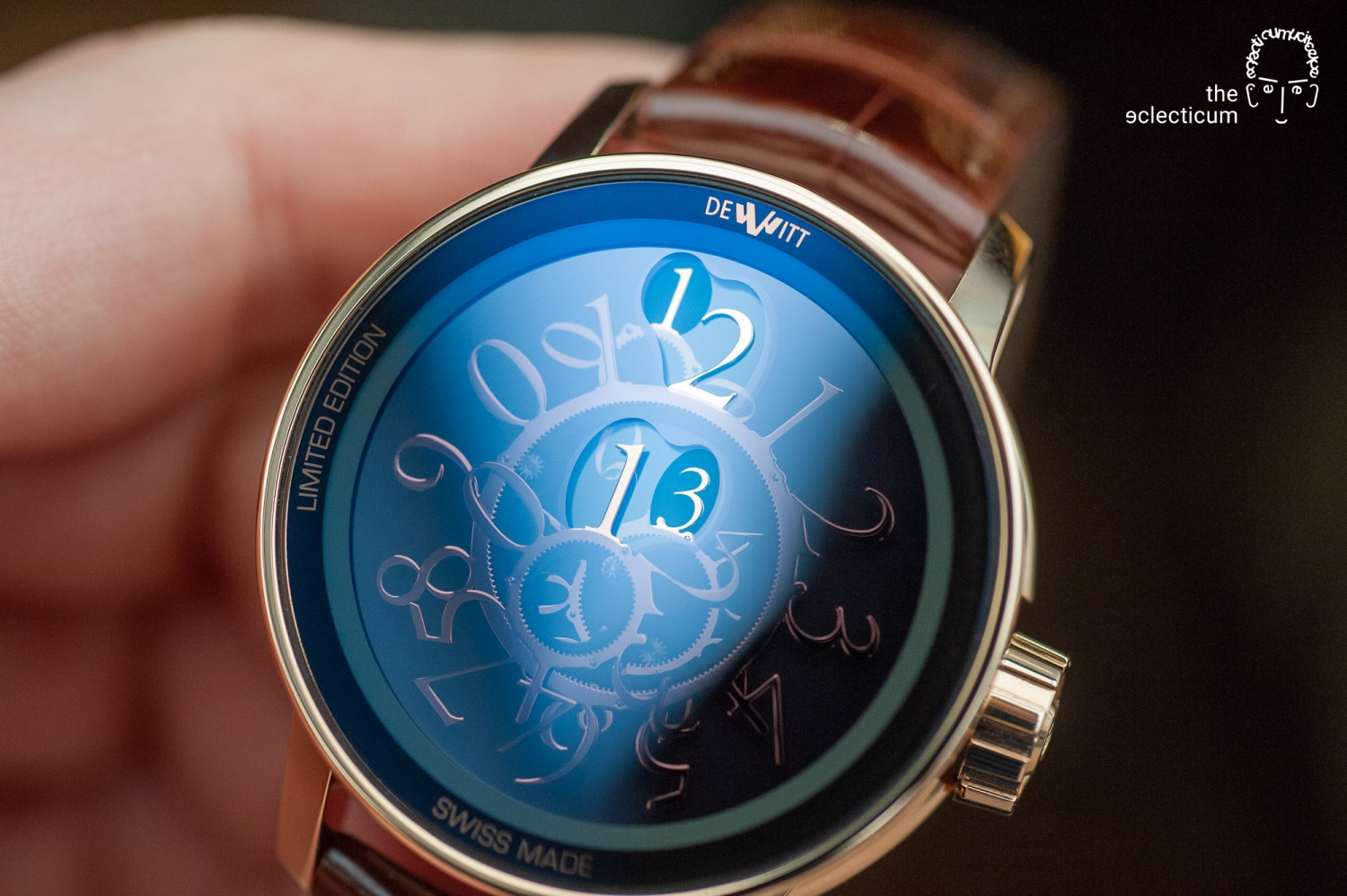 Jerôme de Witt, a direct descendant of the Emperor Napoléon, is a kind of an aristocratic polymath, an immensely creative patron and founder of the namesake watch manufacture situated in Geneva’s Meyrin suburb. He puts a lot of emphasis on self-sufficiency, and that includes not only a deep vertical integration, down to a guilloché-equipped dial workshop, but also the financial independence of DeWitt as a family-owned company.

What always strikes us is that while Mr de Witt’s watches are always interesting, individual conceptions, their real meaning however reveals itself only if one looks at their context as well. 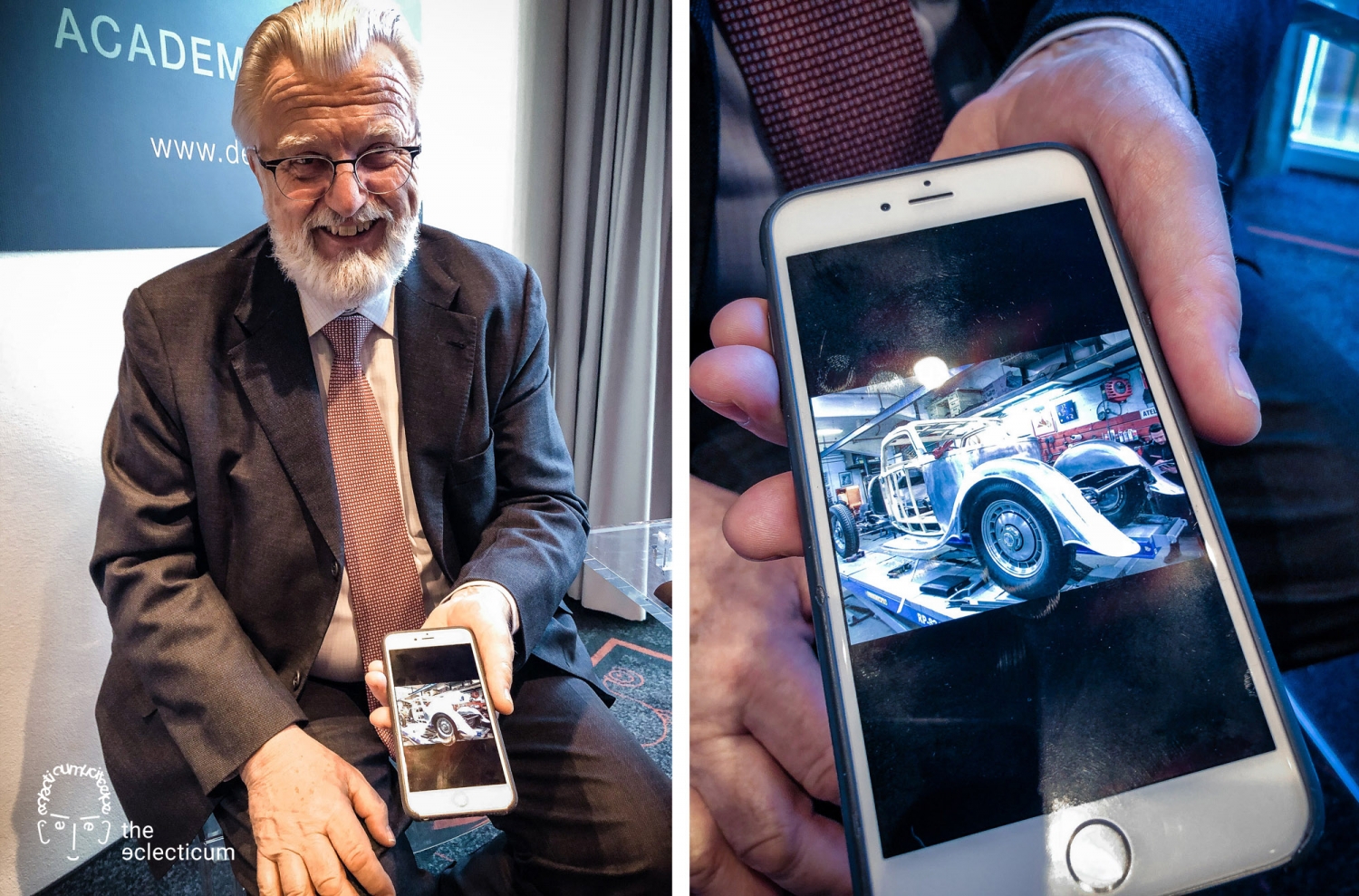 (Jerôme de Witt proudly showing us one of his recent car restoration projects) Mr De Witt is equipped with an intellectual curiosity for understanding the fundamentals of aesthetic, technological, architectural or musical concepts and then transforming and applying them in new contexts such as watch design. He draws from a diverse set of themes, such as cars and other types of engines as the primary source of inspiration and ideas, and not only their aesthetics or their performance, but also technical principles.

The ‘imperial columns’ are a recurring design element of DeWitt watch cases, and they stem from Mr de Witt’s extensive restauration works of classic cars and their gear trains (it is, by the way, also a brilliant master stroke to combine technology (pinion shape) and a noble descent (prongs of a crown) in one element). Aeronautics likewise provide design cues. 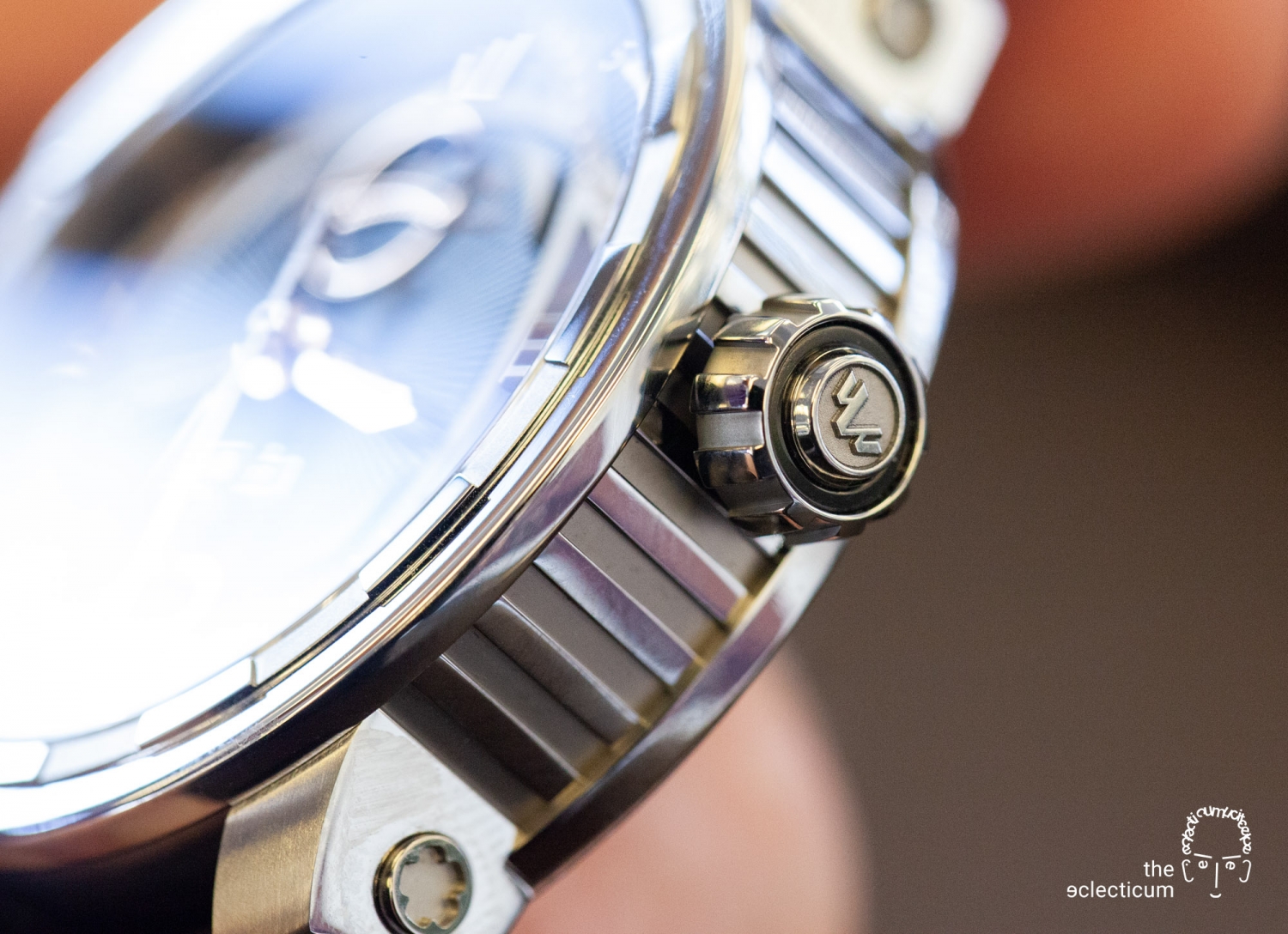 (Imperial columns, here on the Twenty-8-Eight Double Fuseau GMT2 Poetic) That is the one, the aesthetic side of Jerôme de Witt’s brain. The other is his never resting search for unusual for novel techniques to animate the display of time, at times with a subtle philosophical irony, as e.g. the Academia Out of Time exemplifies: a pulsating continuous and a jumping second together provide a cinematic interpretation of the often contradictory approaches humans have towards their time: 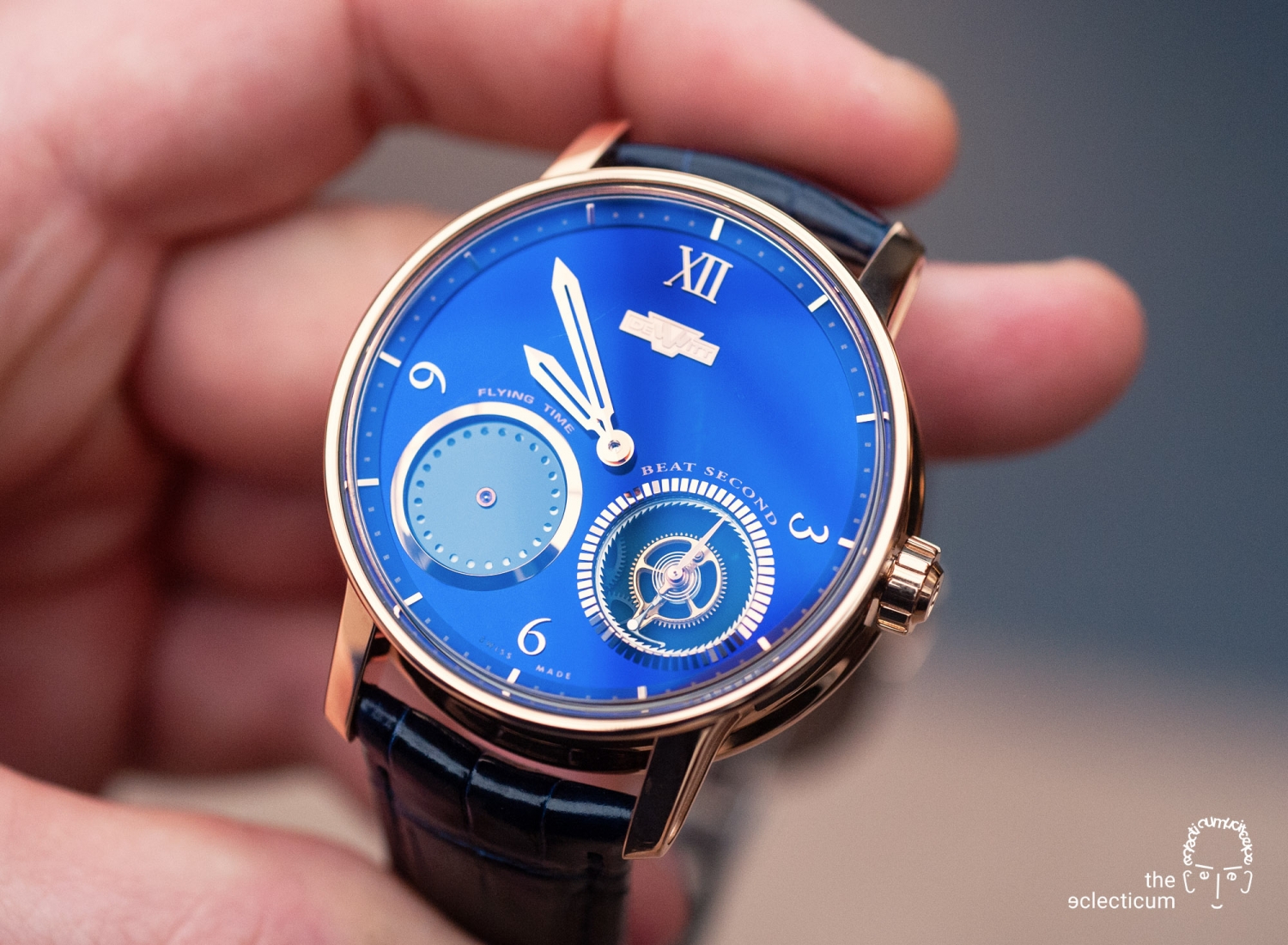 While the ‘Out of Time’ is fascinating (and certainly warrants its own review), we have another watch that we cannot get out of our minds: the Academia Mathematical: 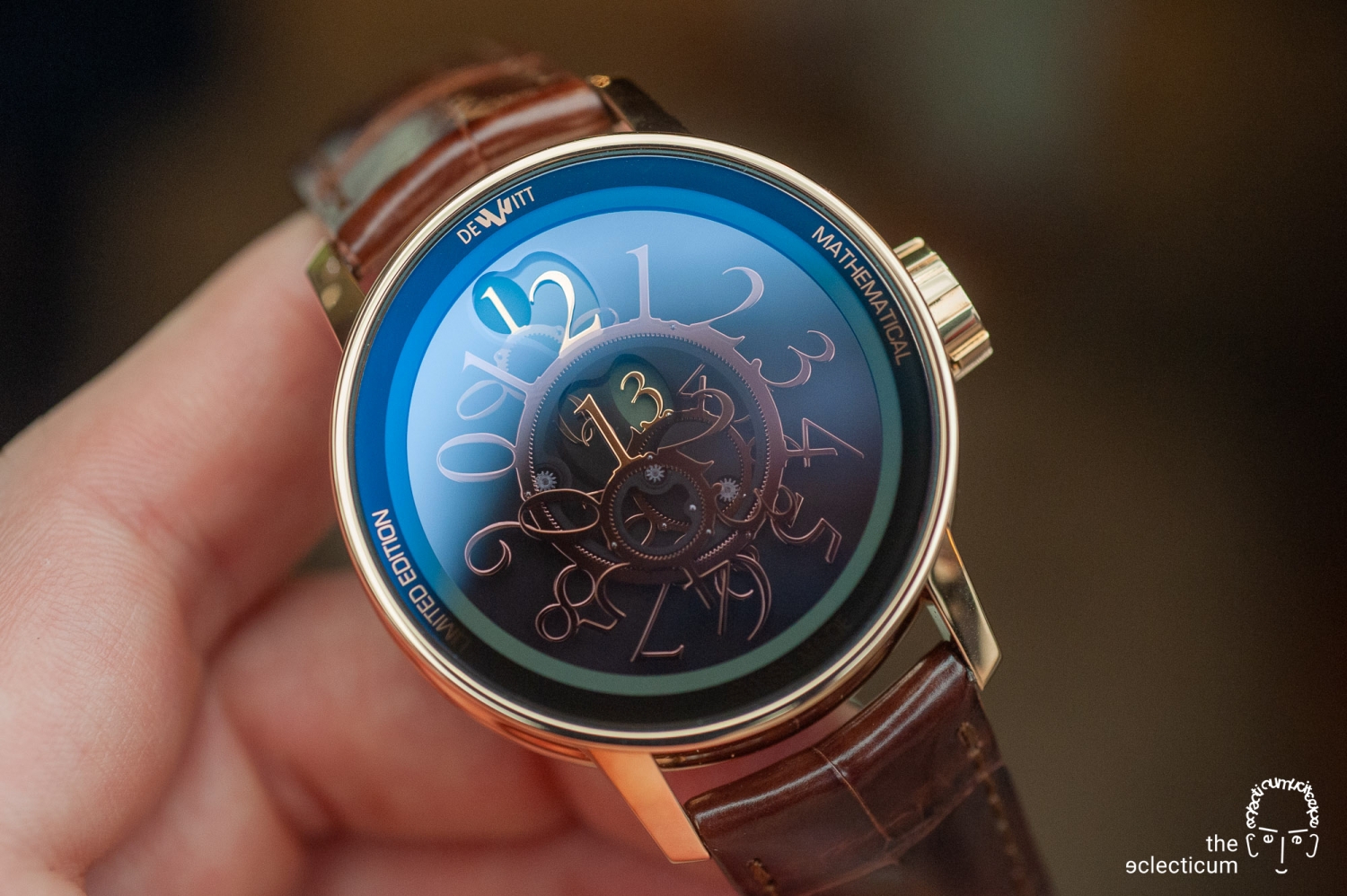 Like with the Out if Time, the Mathematical is a bit puzzling, or mildly disturbing depending on your point of view, to the admirer: the slightly chaotic dispersal of numbers which then – cinematically – jump in a very ordered fashion. 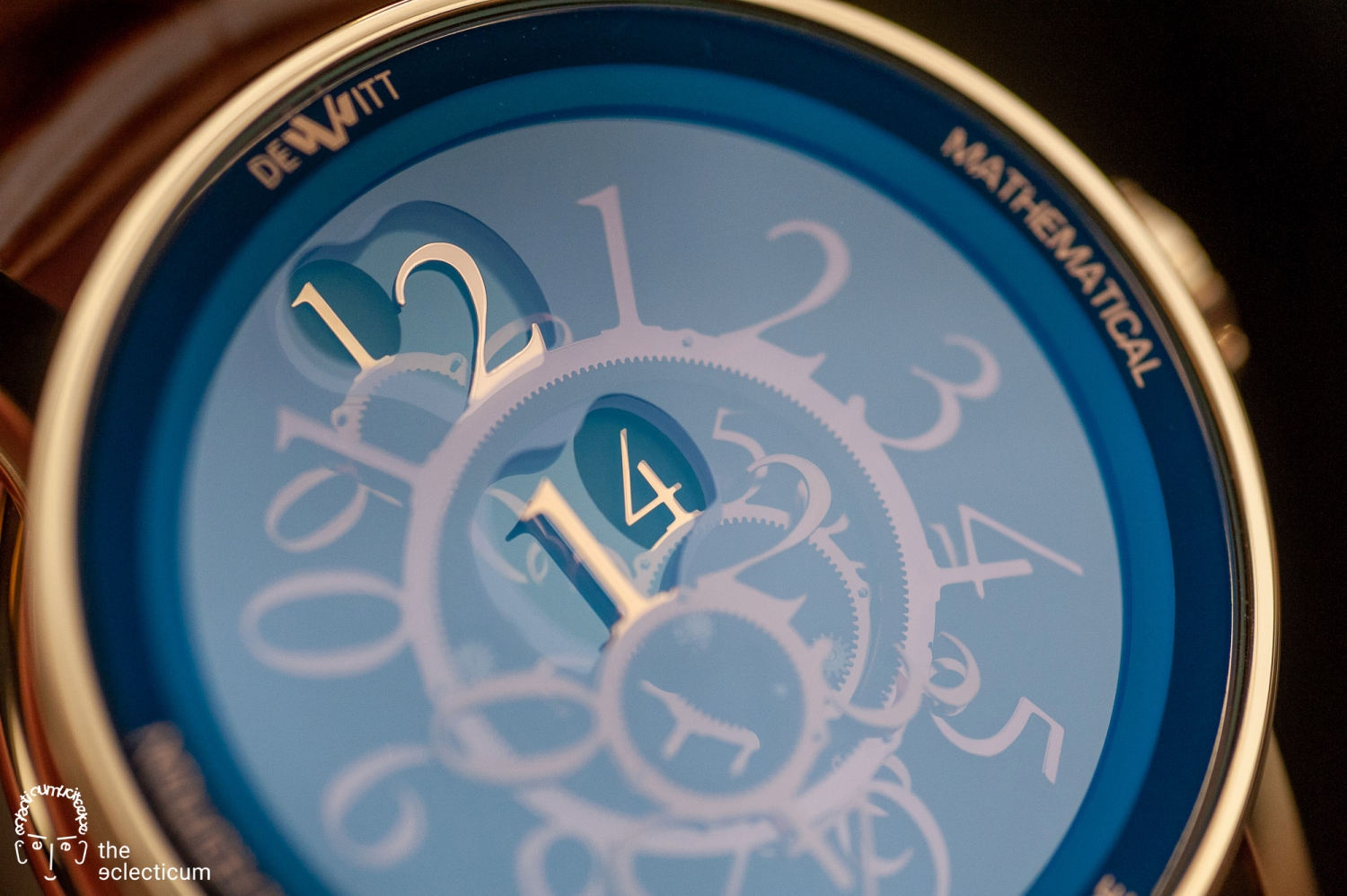 We have the hour digits on the outer and the minute digits on the central radius, respectively. Altogether 4 wheels with numbers, all jumping instantaneously and well-orchestrated, turning the switching of the time indices into an optical as well as acoustical sensation:

A well devised system of various cams is responsible for the activation and coordination of the disks, and also guarantees that the flow of energy from the barrels to the disks is constant and does not influence the amplitude in a disturbing way.

On the sides, again a case (42.5 mm) with imperial column motif (with a titanium middle ring) and a crown that looks like a jet engine exhaust, combined with an enlarged case-back which, as an ensemble, appears like a car clutch: 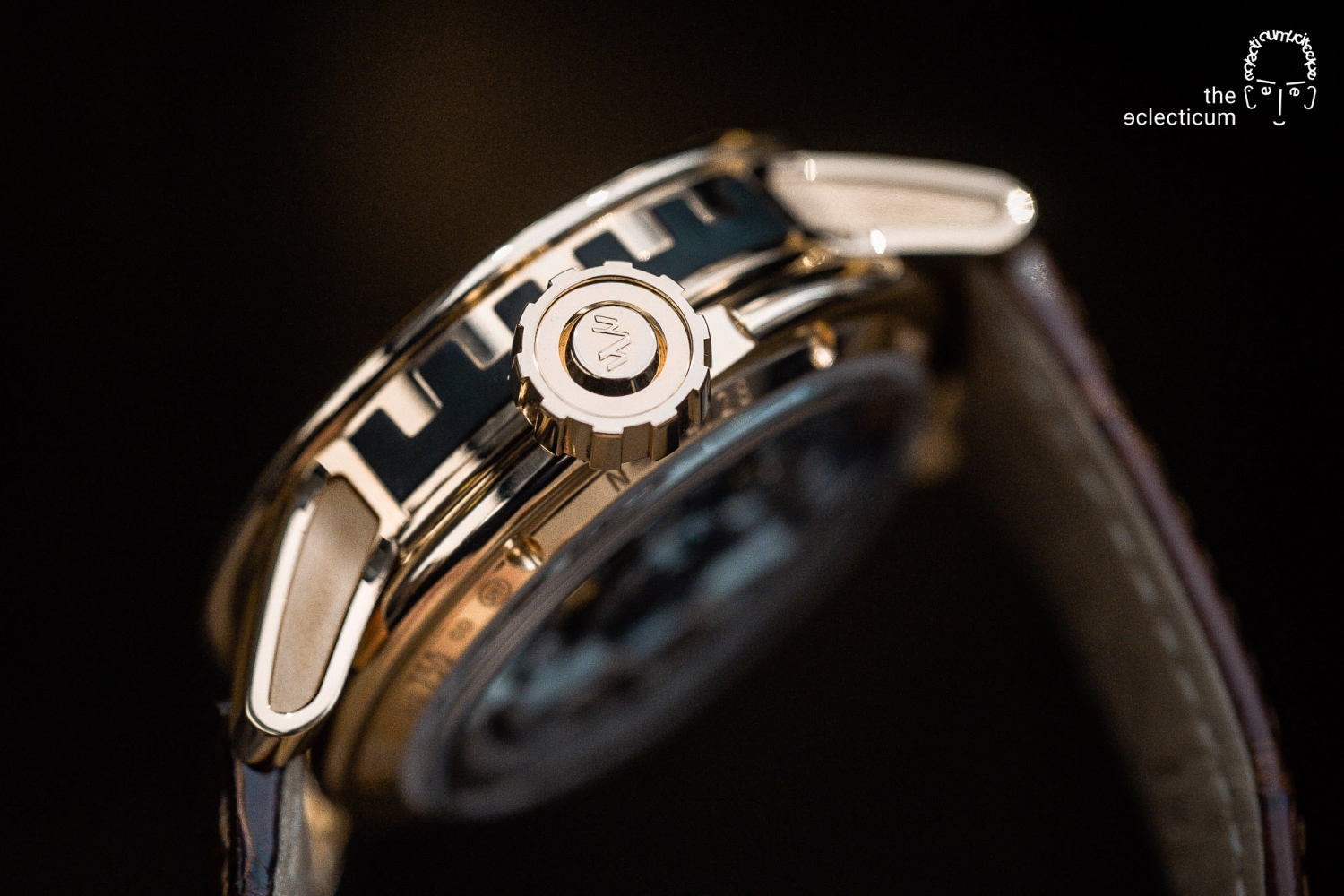 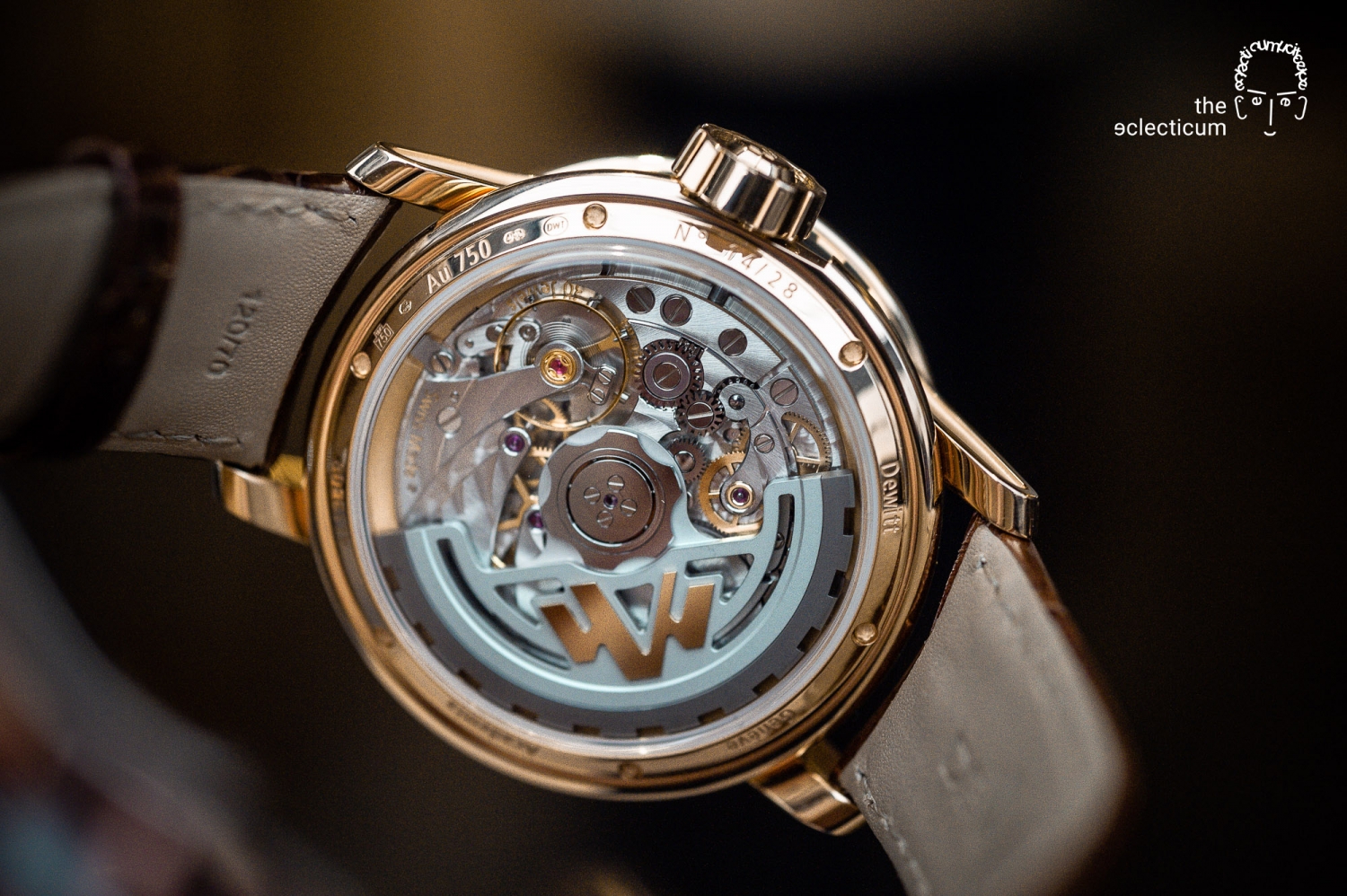 Very appropriate, as the action goes on the front.

Wearing the Academia Mathematical is a delight of rare quality: it seems pretty much clear what the watch is all about, but it is the composition of the entire watch that makes the piece so thrilling: 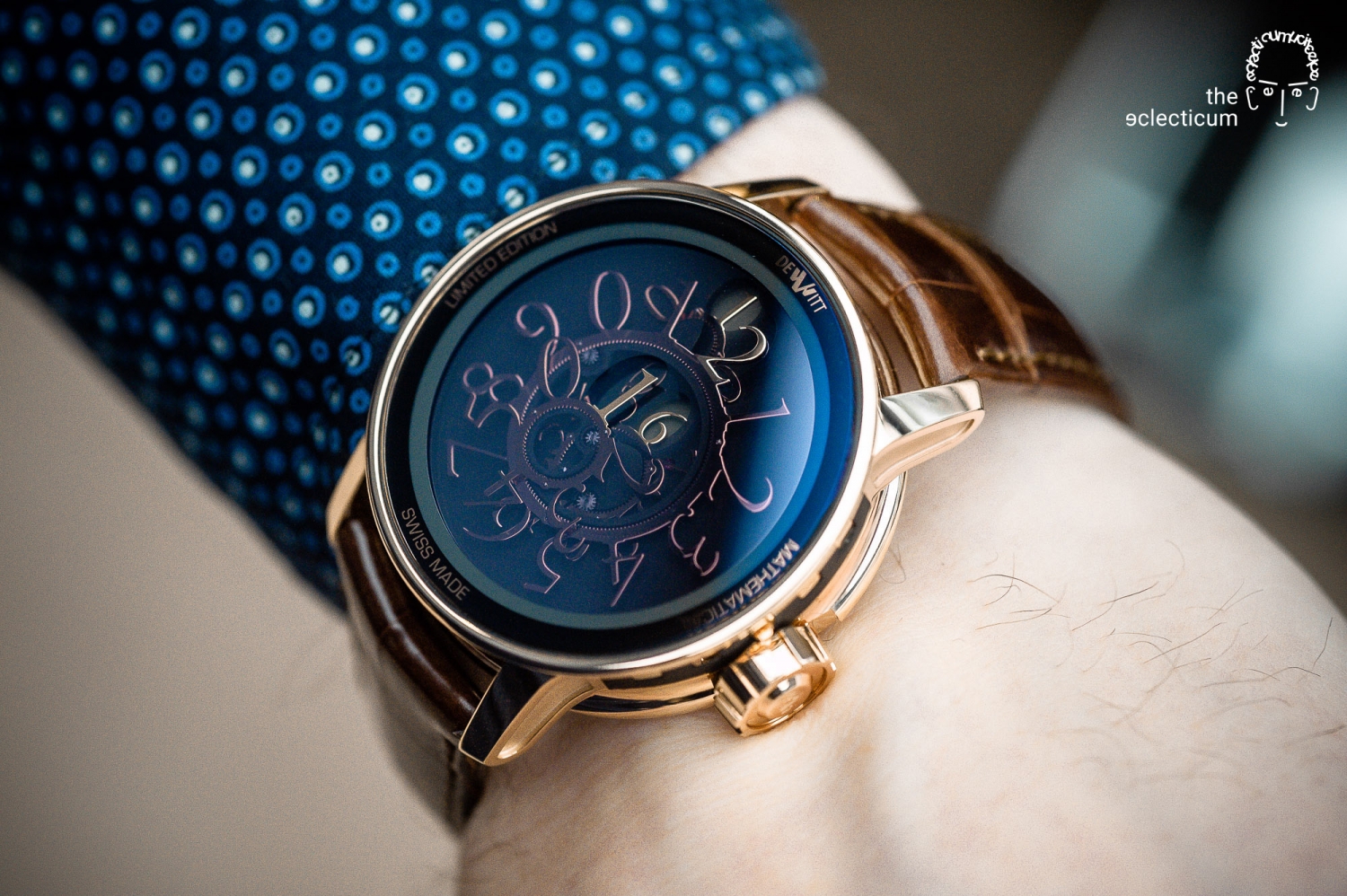 Technical, yes, but with a refined sense that speaks of the mindset of its creator, aesthetically polished like the cars (and their mechanisms!) made by Ettore Bugatti, Talbot-Lago and that kind of fine cars.

There is this intrinsic sense for proportions and functional beauty that is found in above cars and in the ‘Mathematical’ alike. It is a watch which exemplifies like only a few others that a technical piece can well sing a melodious song. 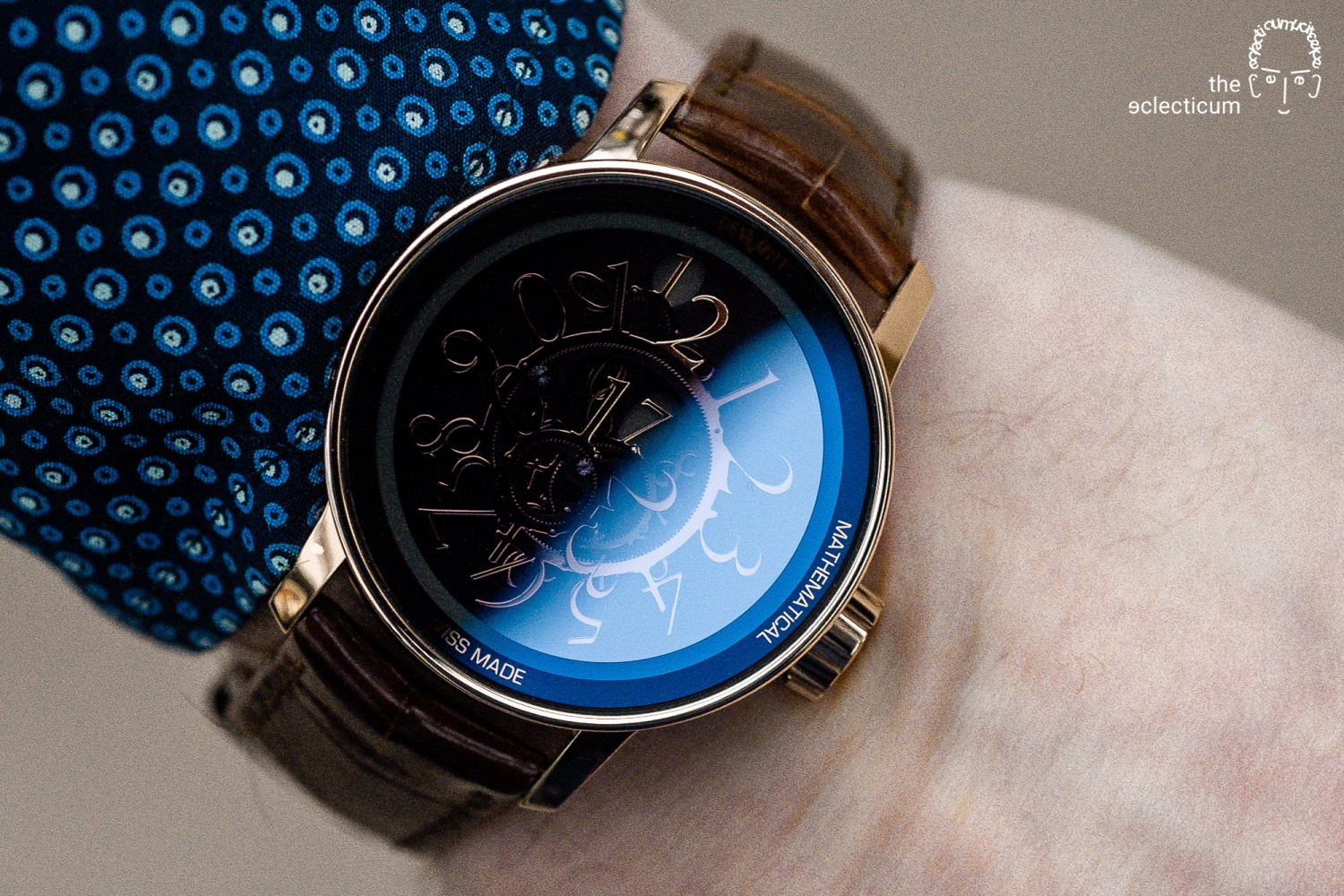 At nearly CHF 190,000 this is not a watch for many. But given its intrinsic subtlety it probably also should not …

The OMEGA Speedmaster Moonwatch Cal. 3861 – an icon made fit for the futu...

the eclecticumThe value of passionate spending: A bespoke project about shoes with ´Il Micio...
Scroll to top