To say that De Bethune is a cradle of watchmaking wizardry is like remaining silent – the sentence bears no news, is obsolete. The company is one of the most exciting, daring and innovative watchmakers and advances technology as well as aesthetics. Although a bit in the shadow of its siblings, the DB21 MaxiChrono is a role model ideally suitable to discuss what makes De Bethune so outstanding. 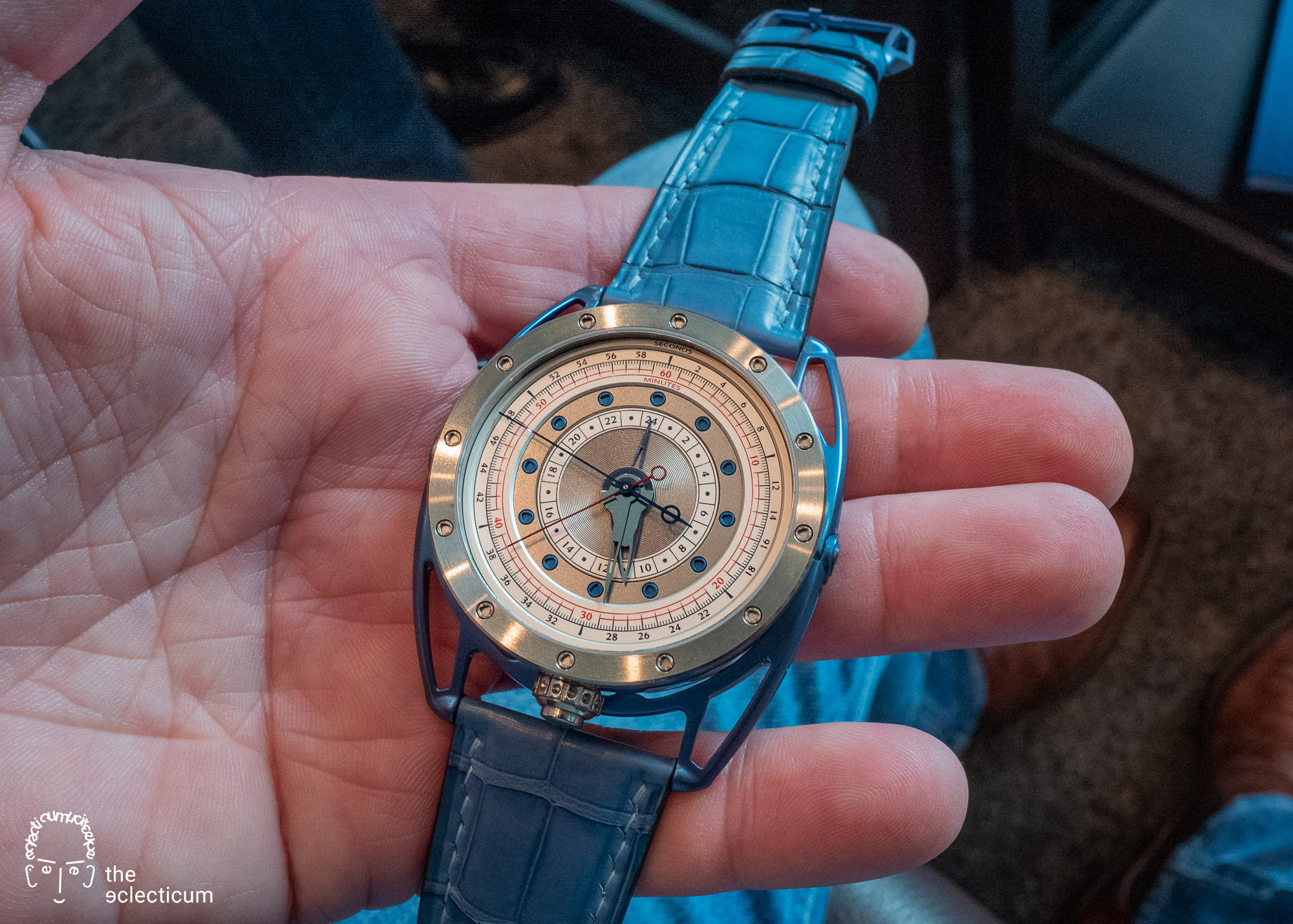 I vividly remember that sunny morning one and a half decades ago in March 2005 when I first set my feet into the magic halls of De Bethune in La Chaux l’Auberson and felt like a spell hit me: a workshop bustling of artisans building and perfecting what I then considered the most glamorous timepieces that ever existed. The main creator and inventor behind De Bethune, Denis Flageollet, was just in the process of setting up his own refuge within the workshop.

This was exactly the time when De Bethune just took collectors’ hearts with their then new DB15 Perpetual Calendar with a 3D moon, a classic and an icon still today. And also a perfect manoeuvre to cover up what was secretly being finalised by Mr Flageollet: a revolutionary new chronograph concept – the De Bethune MaxiChrono lines of watches. A revolutionary chronograph which had to overcome a number of technical challenges, and along that, had been updated continuously to stay in touch with the evolution of the design language at De Bethune: 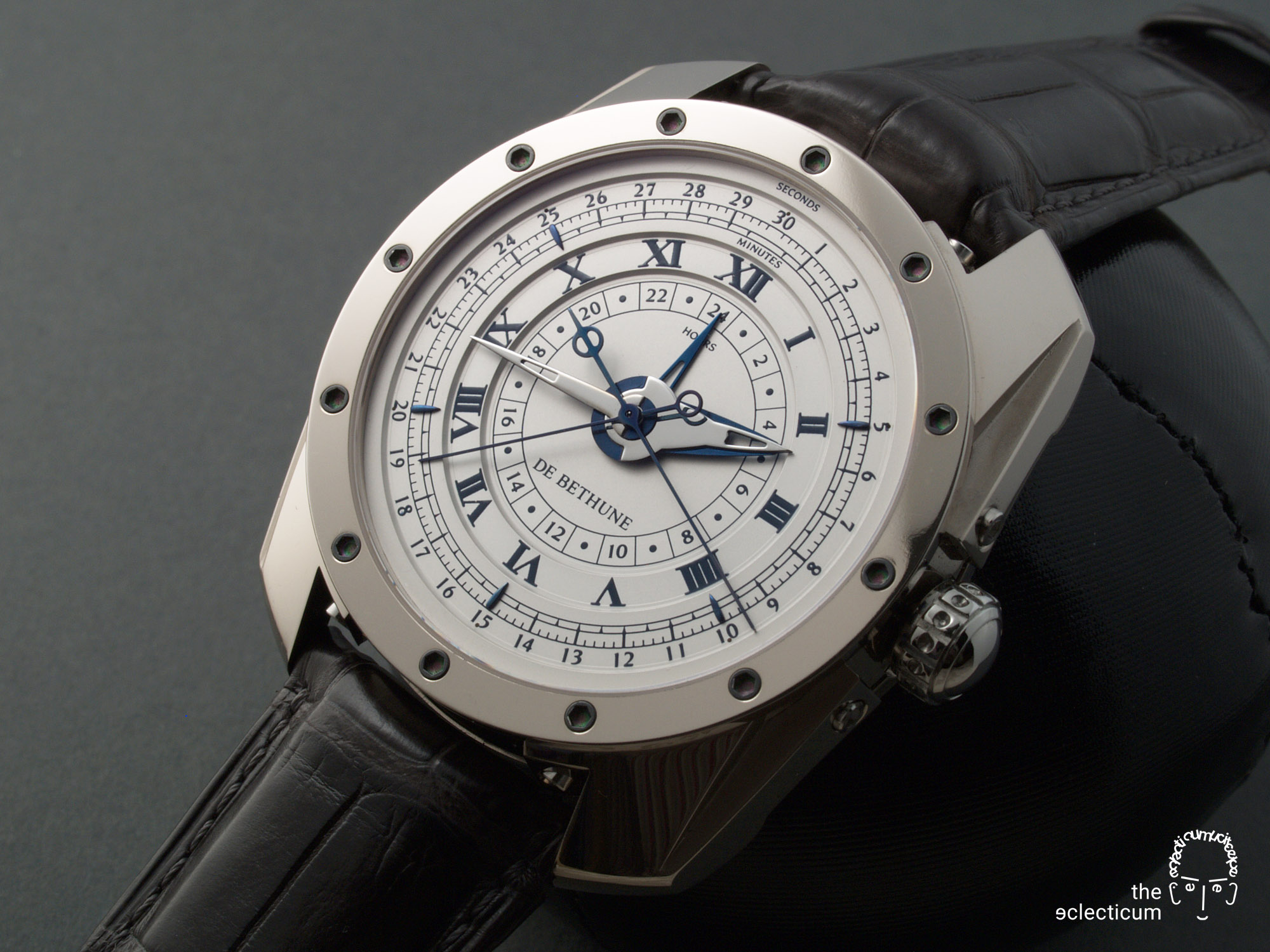 A logical and stringent chronograph design

What Flageollet did was nothing else than to rethink a chronograph from ground up: more intuitive to read, less optical clutter. Core to achieving the objectives were a set of 5 superimposed co-axial hands (time (hours, minutes) and chronograph (24 hours, 60 minutes, 30 seconds) stacked and positioned in a compelling logical way: time hands at the bottom, with the chronograph minute and seconds hands on top of them, the shorter the time interval a hand would indicate the more outside to the dial edge its corresponding scale would be positioned – this way, no time hand could obstruct view on a chronograph subdial, highest reading precision is possible where it matters, and the readout is (almost, more on that later) as natural as reading time.

De Bethune went even that far to opt for a mat opaline silver dial to offer visual depth at least possible reflection (and conducted an ergonomic study to optimise wearing comfort of the 45mm case): 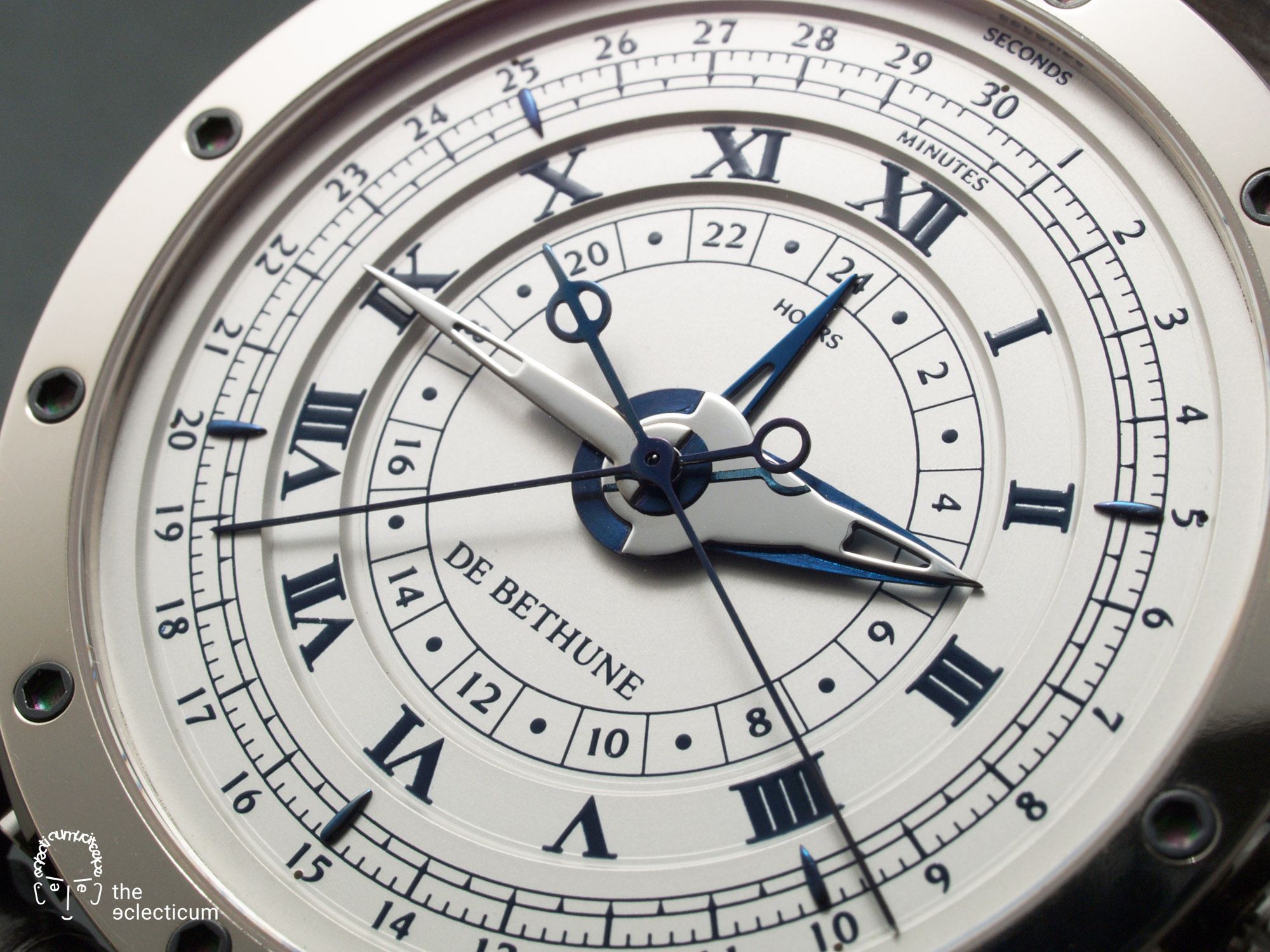 (5 co-axial hands make for a most natural chronograph experience) Before even going down to the intricacies of the movement I think it is worth to imagine the cannon pinion with its 4 additional axes in its centre!

That such a movement won’t be anything conventional is a foregone conclusion, and a right one of course! De Bethune’s Cal. DB2034 is a 30mm masterpiece with three independent column wheels and an eccentric vertical clutch. Besides, is also came with the ‘normal’ technical features of De Bethune, such as the patented third generation titanium/platinum balance-wheel as well as the exclusive De Bethune “triple parachute system” (a 2005 patent): 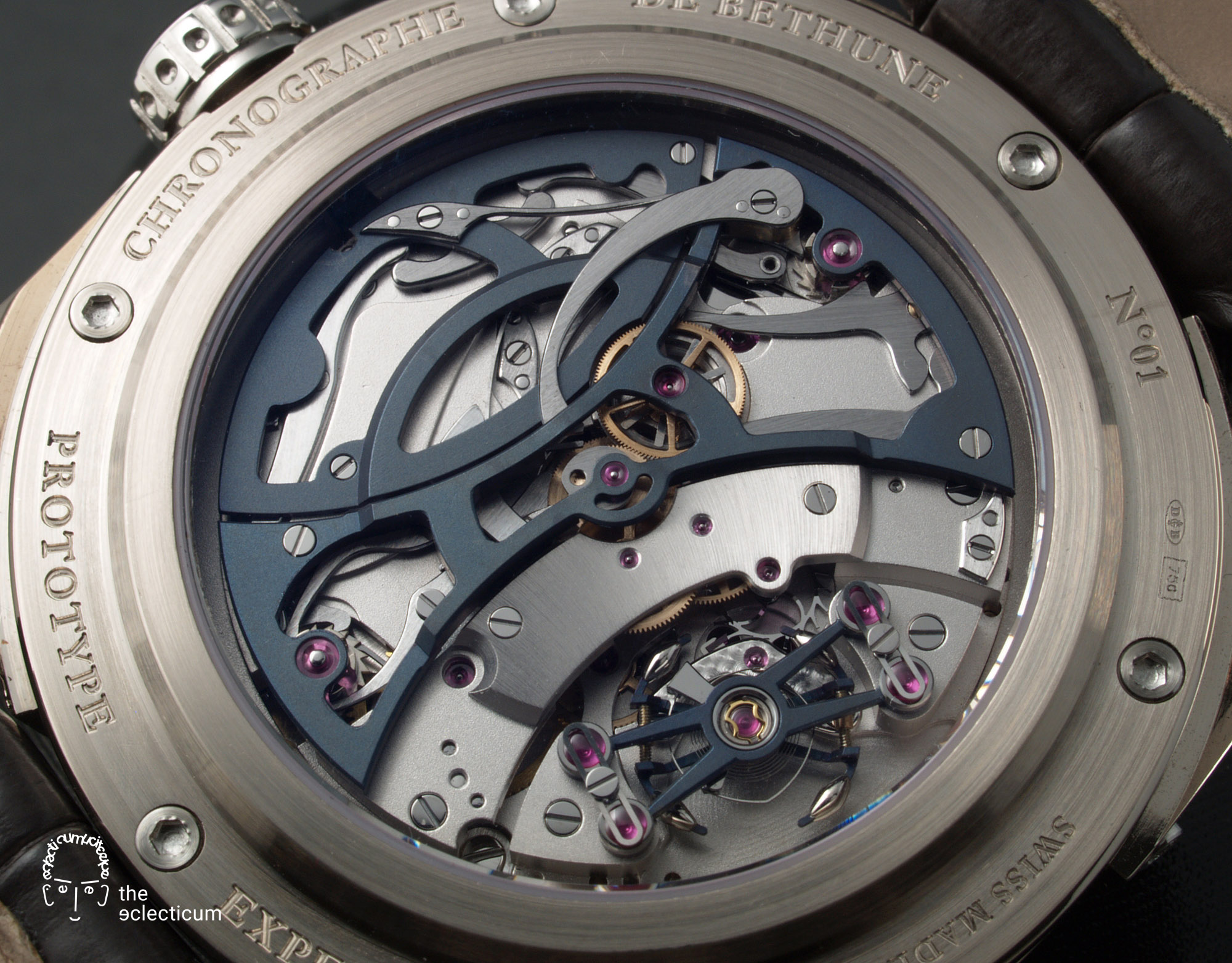 (De Bethune Cal. DB2034) Normally, I would have explained the movement much deeper, but the original DB21 MaxiChrono was plagued with teething problems (I vividly remember the hands of the prototype floating unwillingly around on the dial) which took a lot of time to solve. Further, there was a logical imperfection with the 30 seconds, 60 minutes and 24 hours counters to address… and also the case, as elaborate as it was, did not really convey the refined conception of the chronograph (it did, however, influence other watches, such as the Dream Watch).

Denis Flageollet had a great number of ideas to ponder, and he did…

Fast forward 8 years, straight into the year 2014: The MaxiChrono makes a second debut in form of the De Bethune DB28 Maxichrono – a watch not only aesthetically refined! 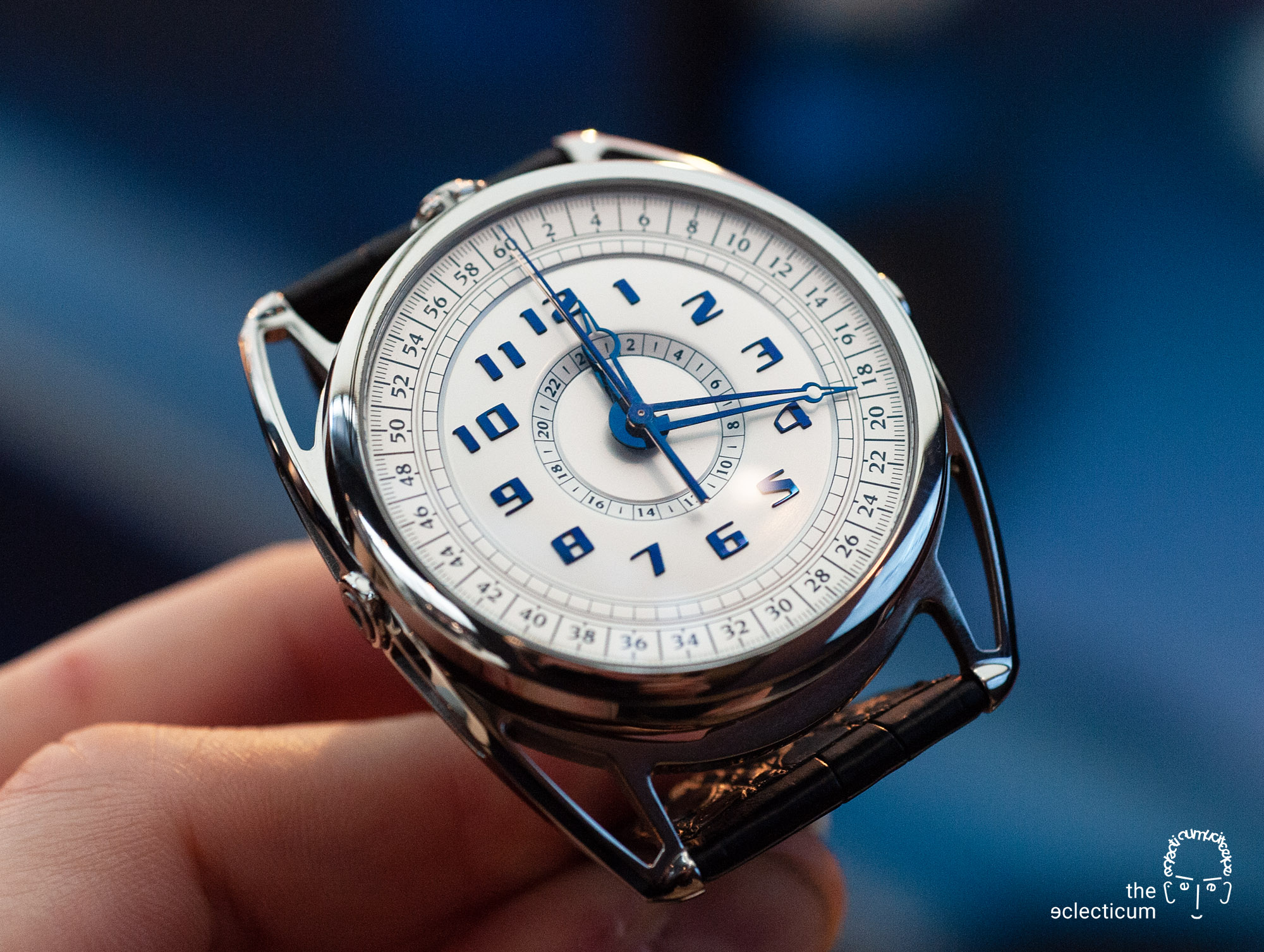 (The De Bethune DB28 MaxiChrono from 2014) It is not only the contemporary 46mm DB28 collection shape with its comfortable floating, articulating lugs, the crown with the co-axial pusher has be relocated to 12 o’clock (ok, that’s a non-issue with a central-stack chronograph), and also the dial looks a lot cleaner – note that one scale is missing, and there is a reason for that!

As part of the requirements sheets for the revision was to make reading the chronograph more intuitive than it already is. Flagoellet took the one aspects which could be improved without compromising the utility of the chronograph: the seconds counter now stops 60 seconds, and as a consequence it could use the same scale as the minutes hand – voilà!

This is the only the token of the fundamental aspects that had been improved on the ‘business side’ of the movement, now called Cal. DB2030. In essence still the same, but if you compare it in detail with the original movement, you’ll notice crucial differences far beyond modified bridge shapes and finishes: 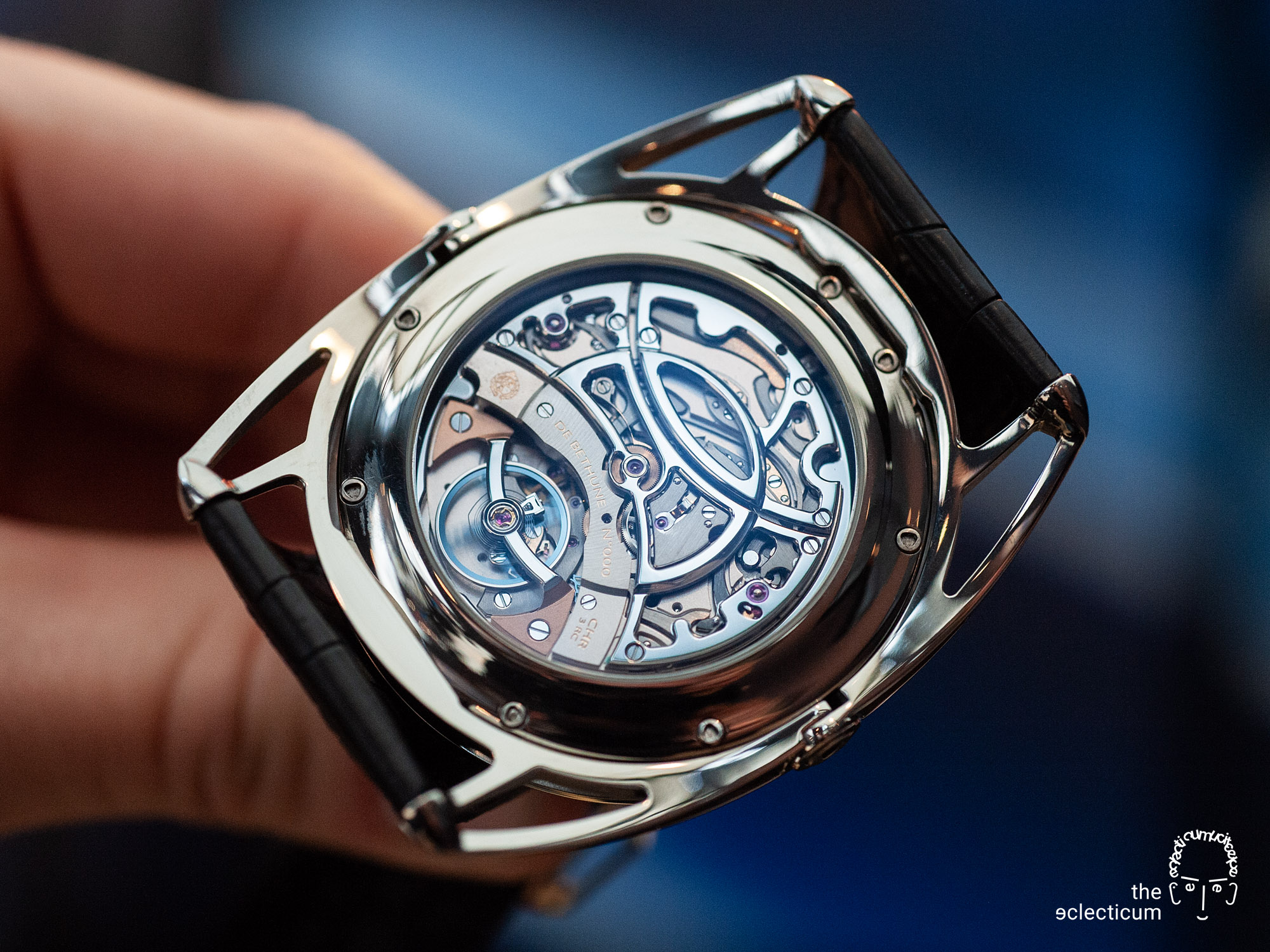 (De Bethune Cal. DB2030) Under the hood, the most important improvement relates to the core of a chronograph, the clutch system. De Bethune conceived an entirely new system called – a bit self-opinionated for my taste – the Absolute Clutch System (patented in the same year 2014), essentially a separate, dedicated and customised coupling mechanism for each individual counter, intended to retain most of the advantages of the horizontal and vertical clutch systems while eliminating their faults:

Each counter now operates semi-autonomously from each other with a clutch that is best fit for its respective purpose: the seconds counter has a vertical clutch to avoid visible teething jumps, the other two use meshing gears to avoid the friction issues of vertical clutches, this is possible since those wheels turn slow enough to reduce eventual damages from repeated engaging and disengaging. Did I mention this could be called attention to the detail?

For completeness, the column wheels had to be revised, with two of them now being positioned on one single axis: 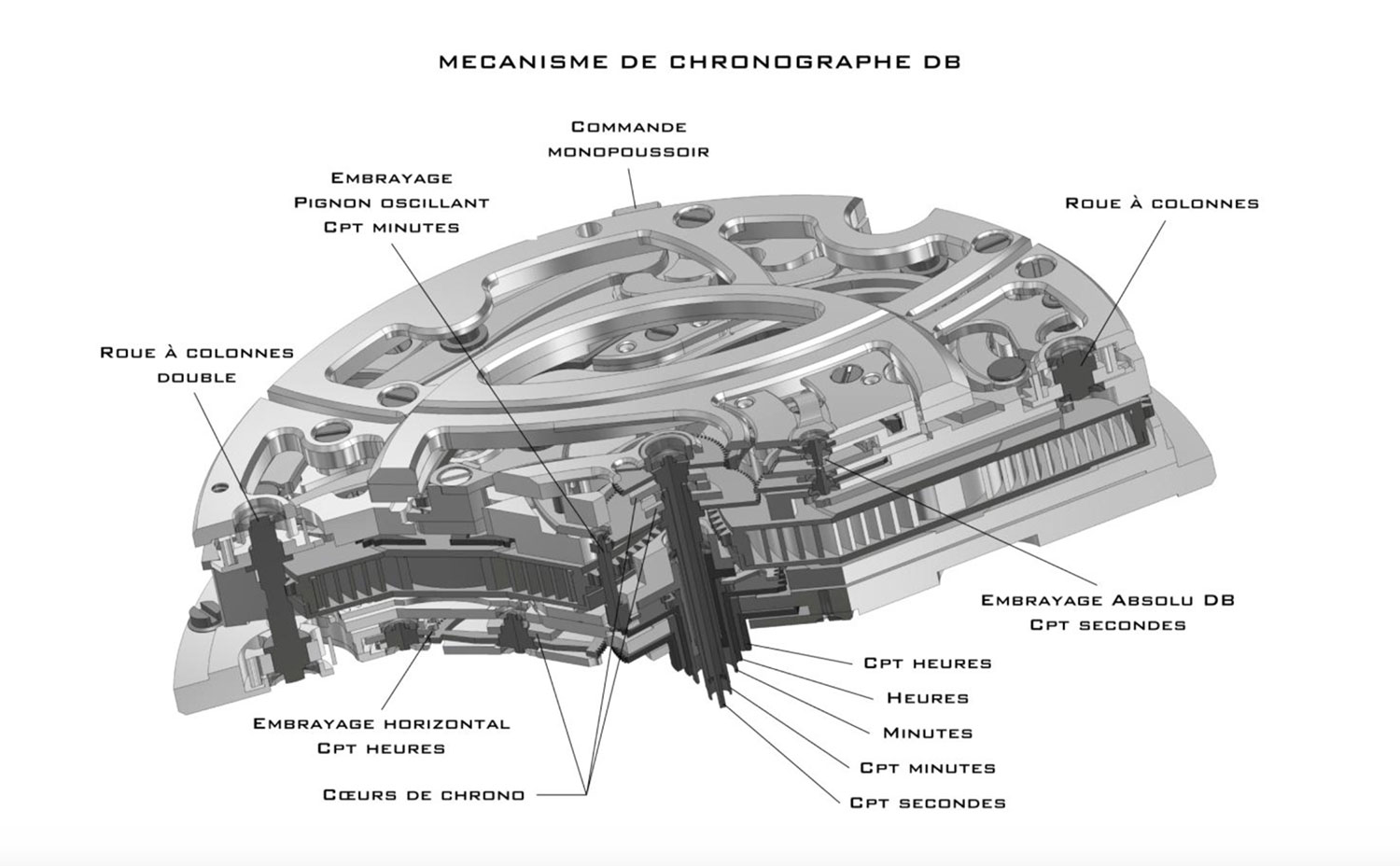 (Technical drawing of the Absolute Clutch System, showing the clutches (‘embrayage’) and the column wheels (‘roue à colonnes’)) The Triple-Parachute has made way for a more conventional balance bridge, while the balance itself is now crafted in titanium with white gold timing inserts (patented in 2016). 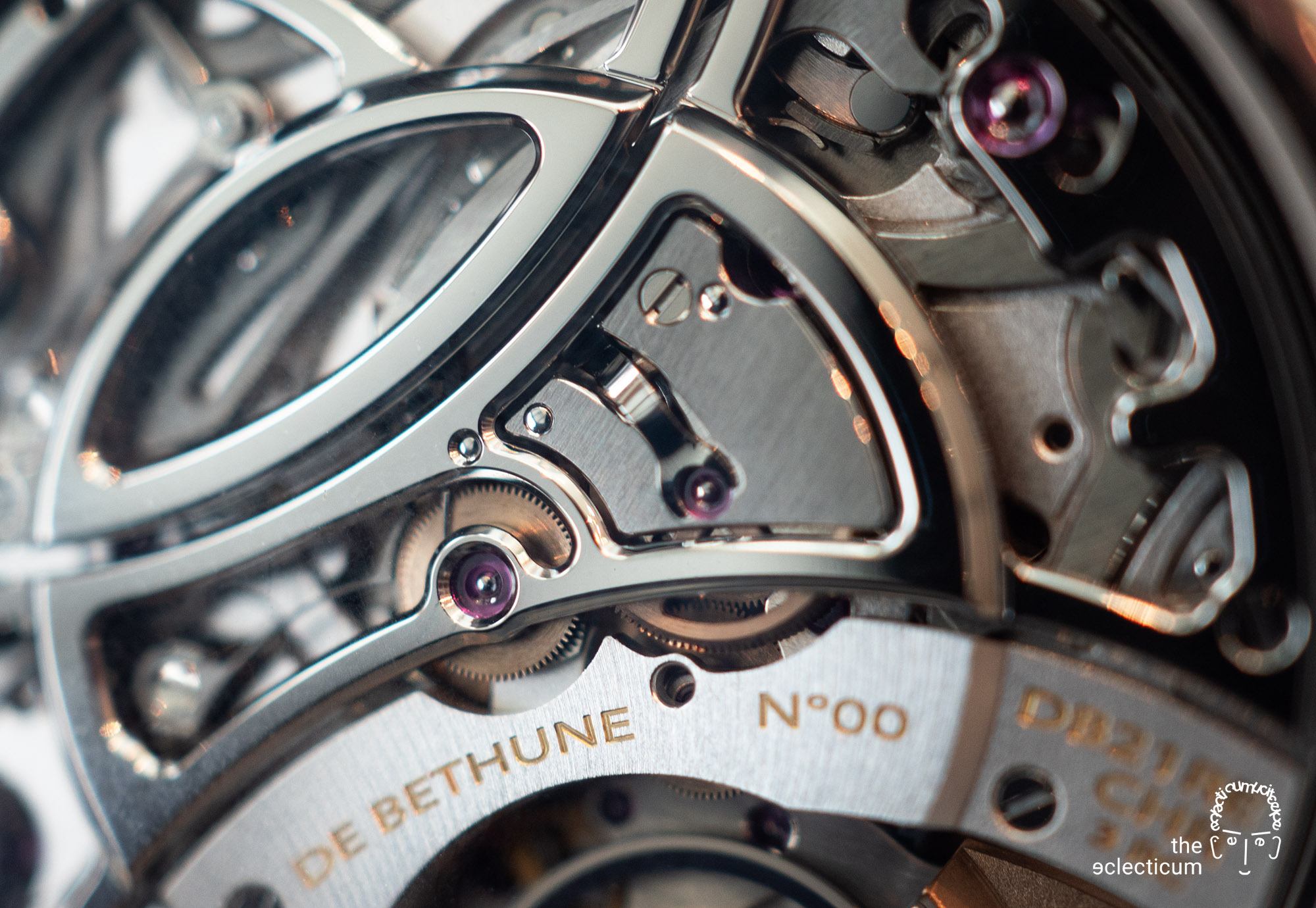 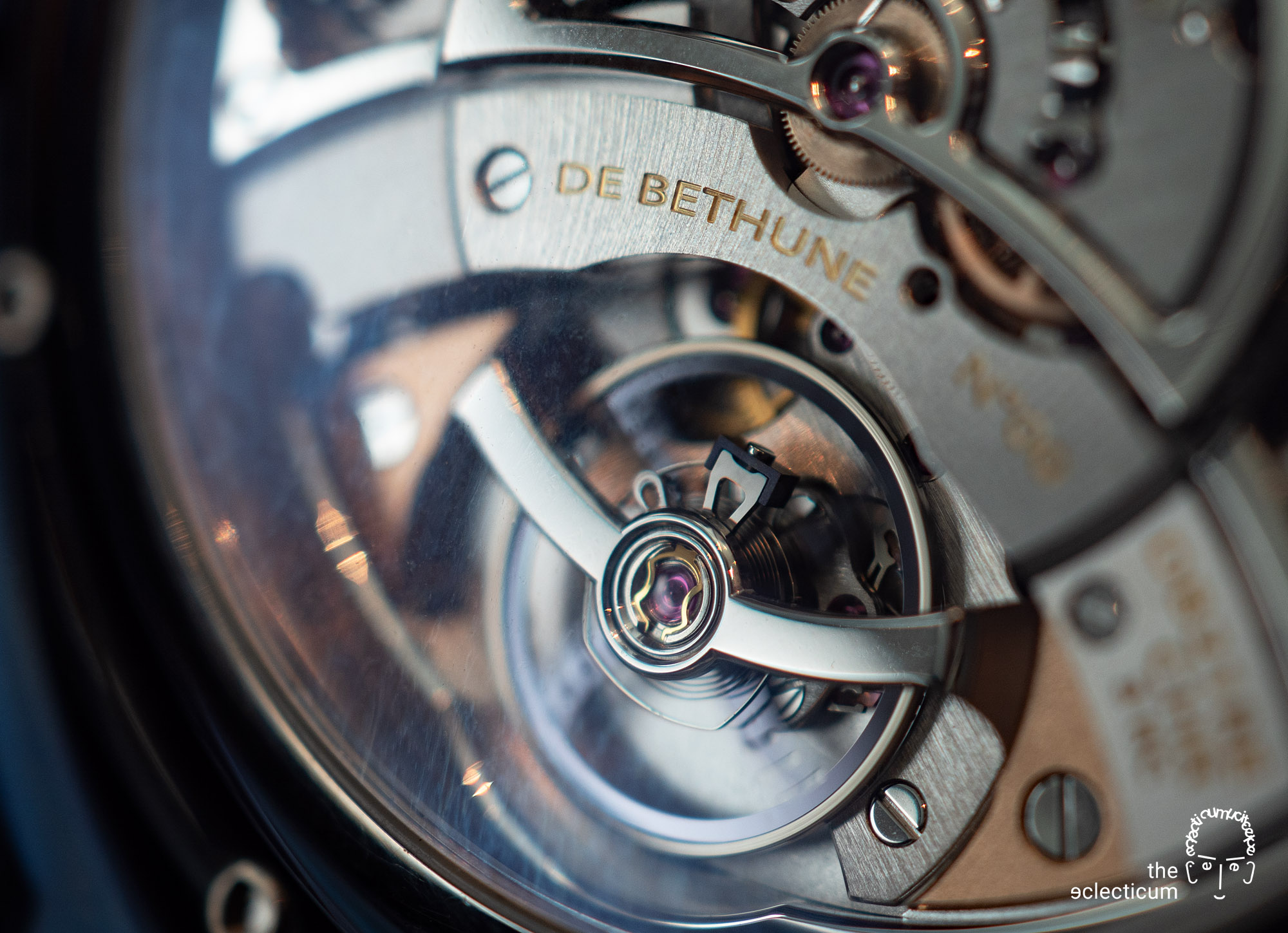 Lastly, the finishing has been modified to feature more rounded and highly polished bridges, a significant optical improvement in my book. 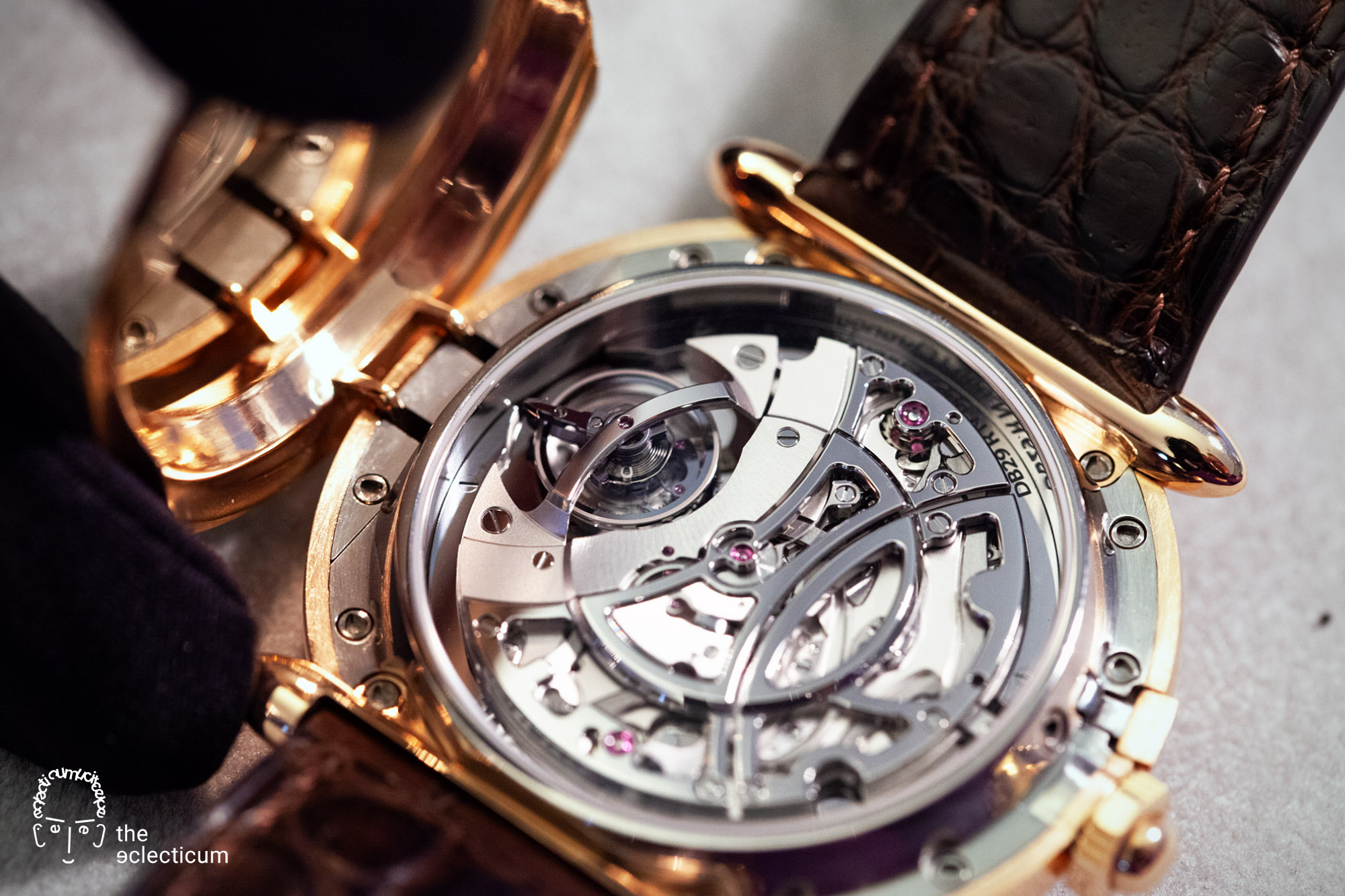 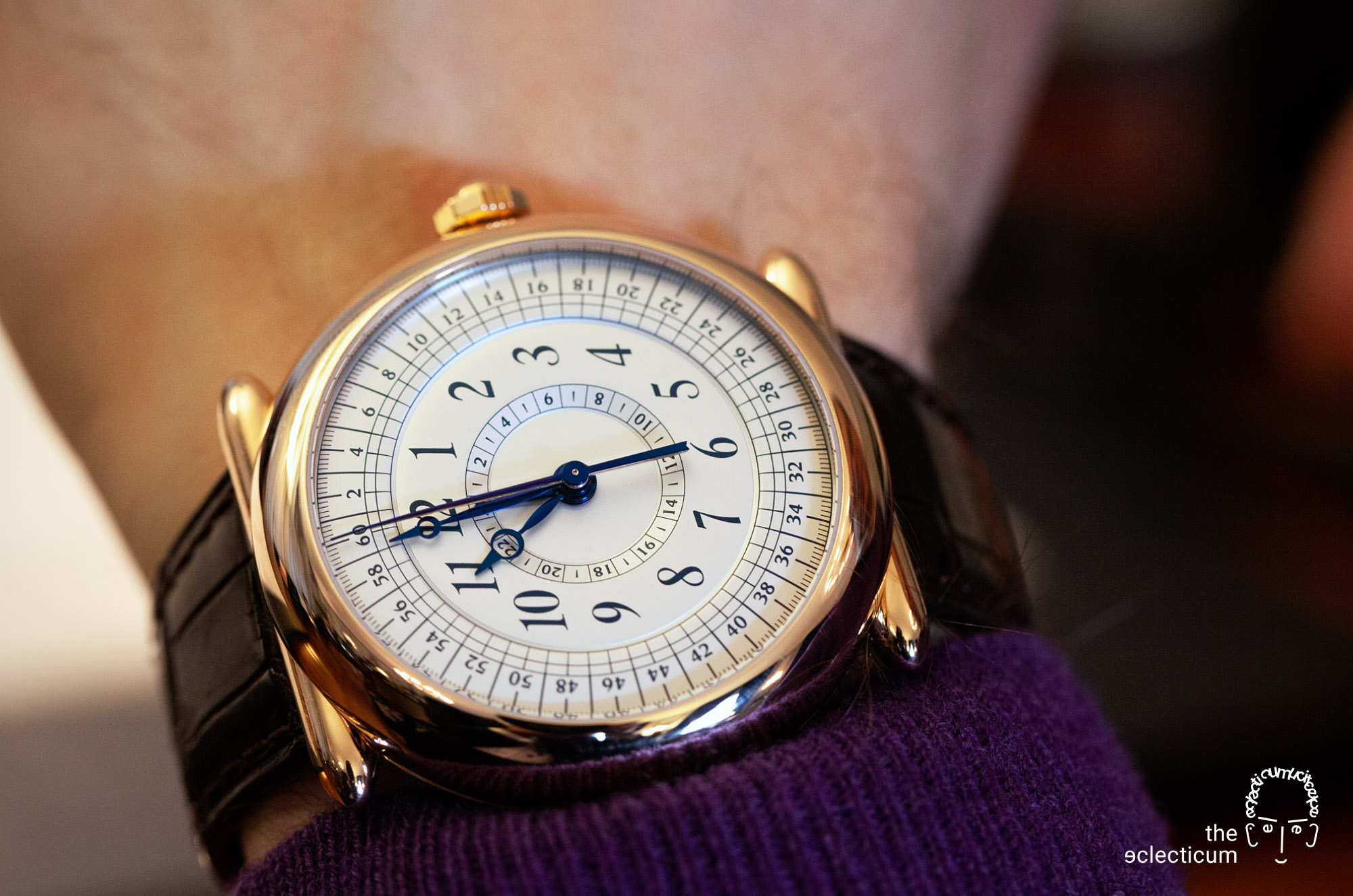 While the advanced tourbillon seems a proper fit to the chronograph, the significant surcharge De Bethune asked for it appears out of proportion – not only to us…

(A bit) back to the Roots

… and with above headline, I not only refer to the aesthetics! Enter the new DB21RE MaxiChrono Réédition: 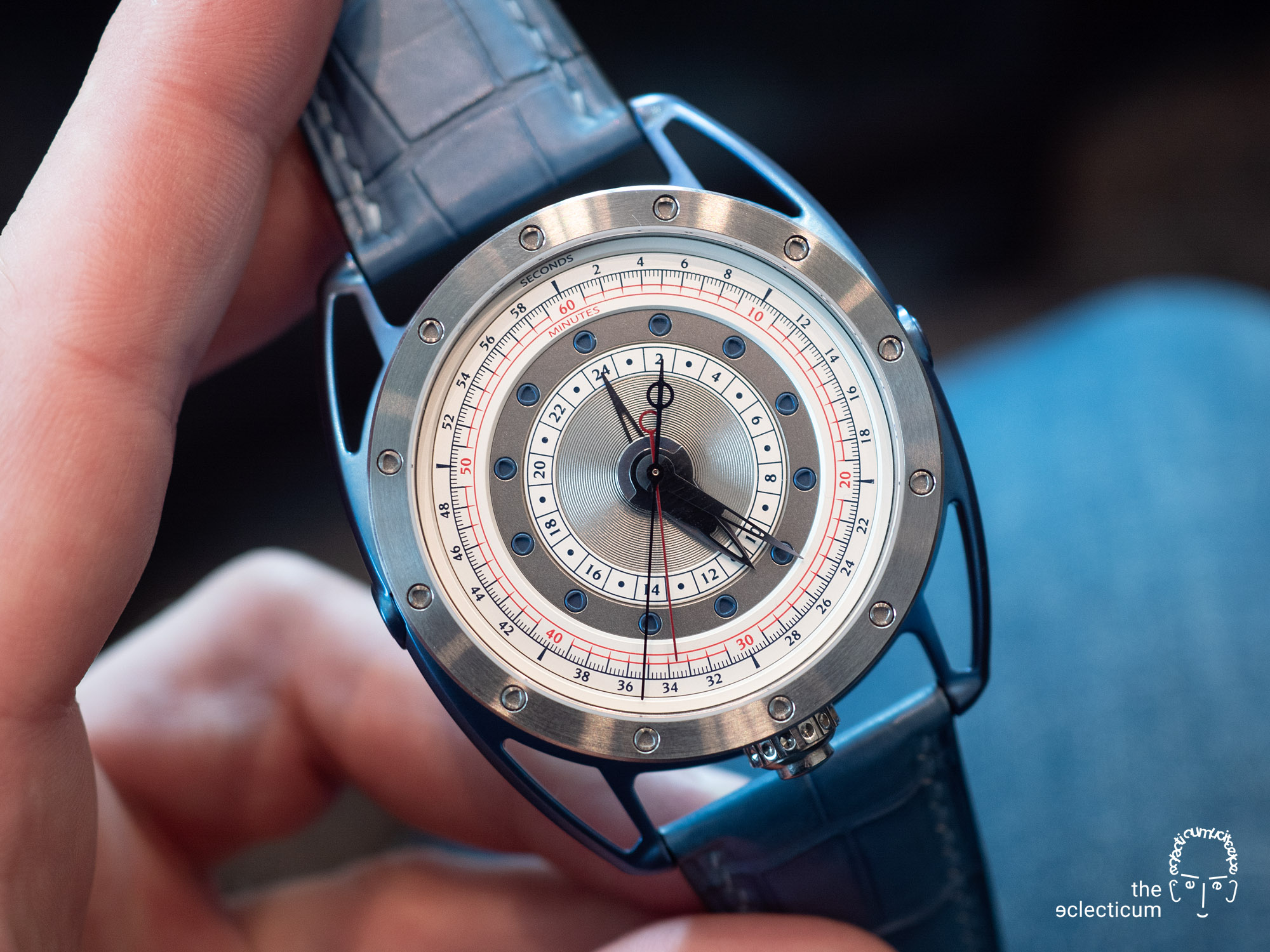 Design wise, the watch returns to the more edgy, sporty DB21 collection, which comes in a 44.4mm titanium case that underwent tremendous refinements and is not also equipped with the lauded floating lugs, which are now executed in heat-blued mat titanium – this seems just as a nice touch, but precisely this finish catches all available light, and therefore the lugs are a dominating design element.

Also, the crown moved once more to 6 o’clock, making the chronograph immediately easy to operate with your thumb, regardless whether you are right- or left-handed: 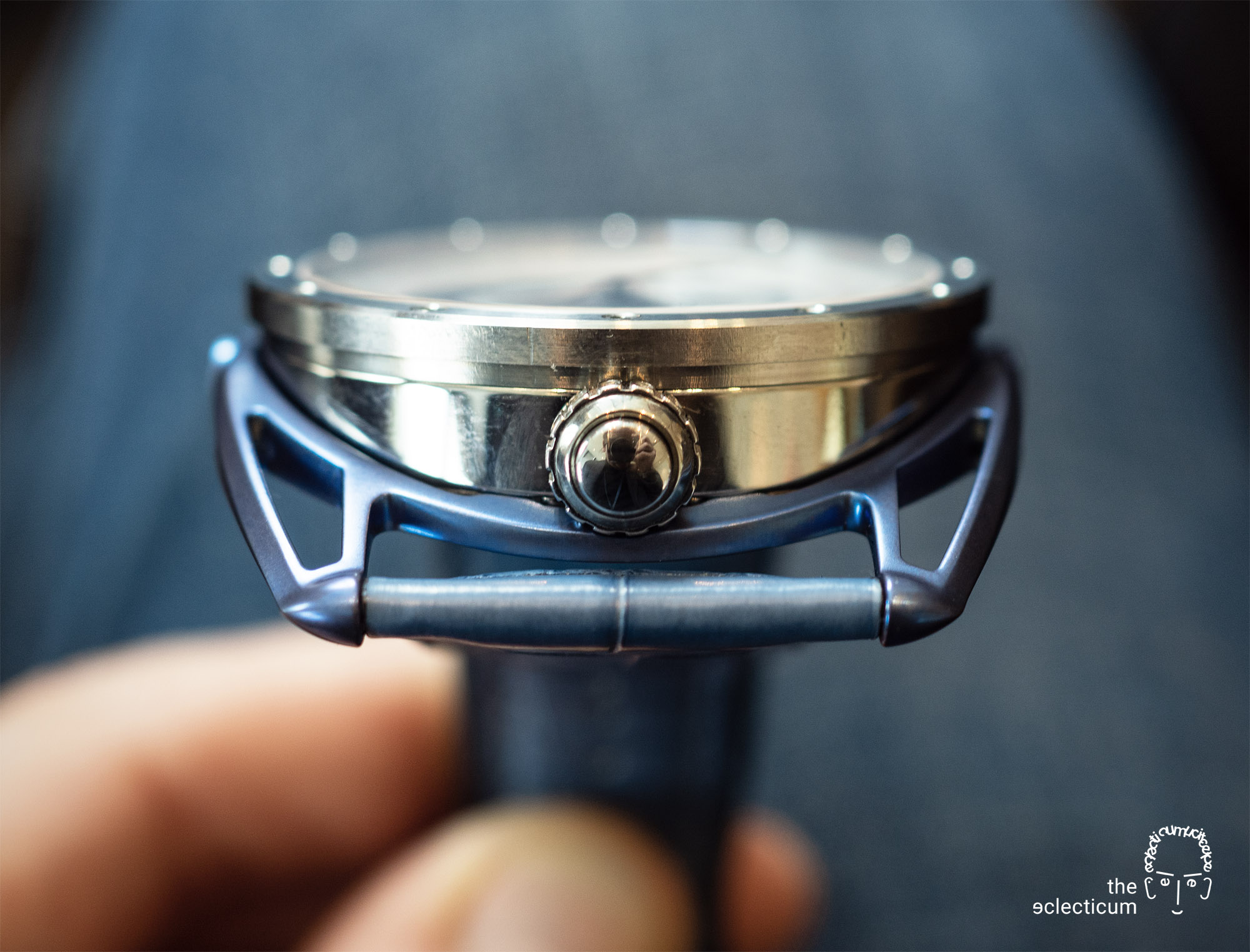 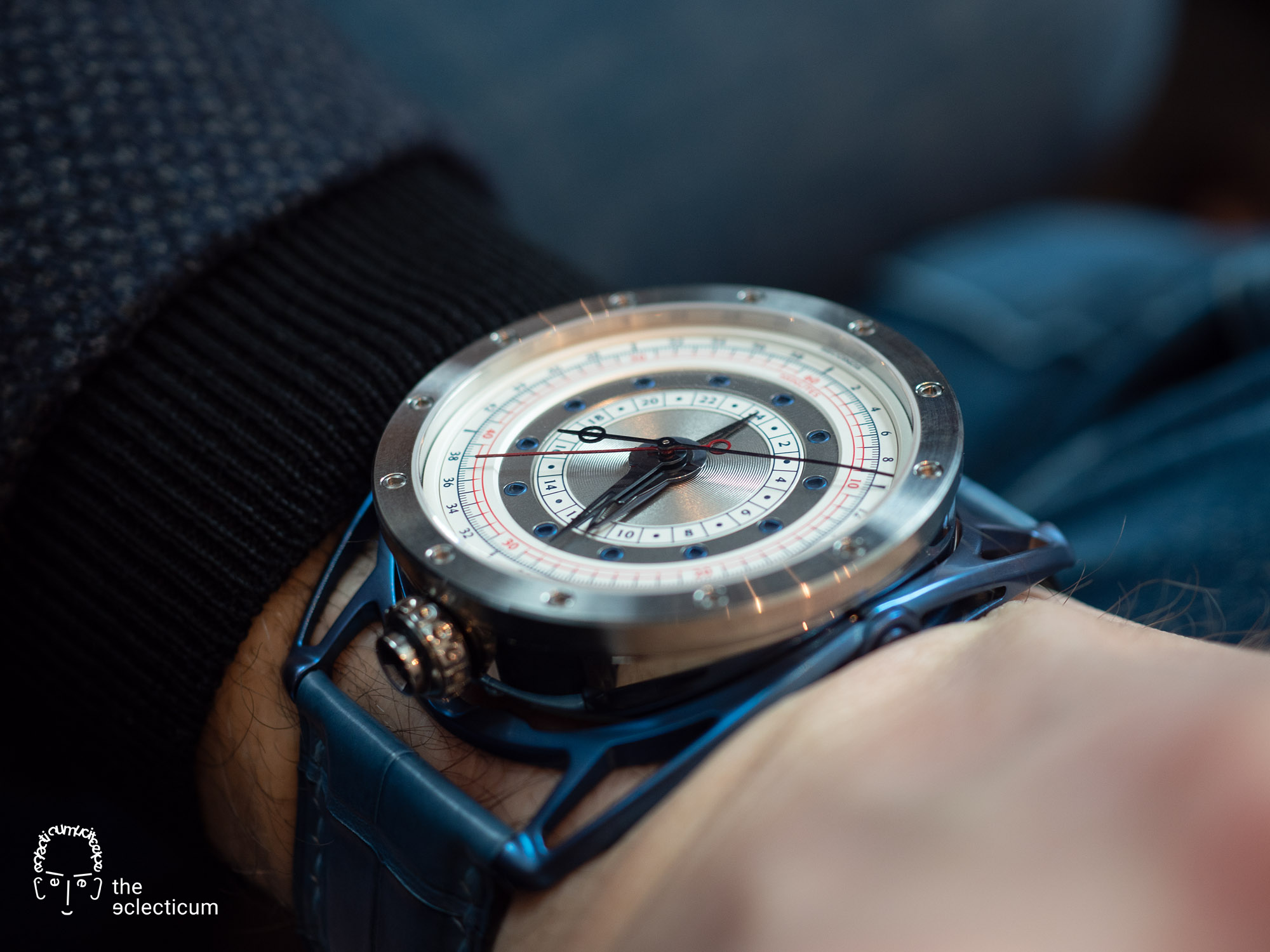 With the new ‘Réédition’, the original face makes a reappearance – sort of: back are the elaborate hands, and back is also the layered arena of the old one, with the notable aesthetic upgrades of the DB21 collection, and the change from a 30sec to a 60sec chronograph scale introduced with the DB28/29. While both seconds and minutes hands now count to 60, they reverted to separate scales – a good decision in my opinion, as it makes it less likely that the two hands are mistaken for each other. 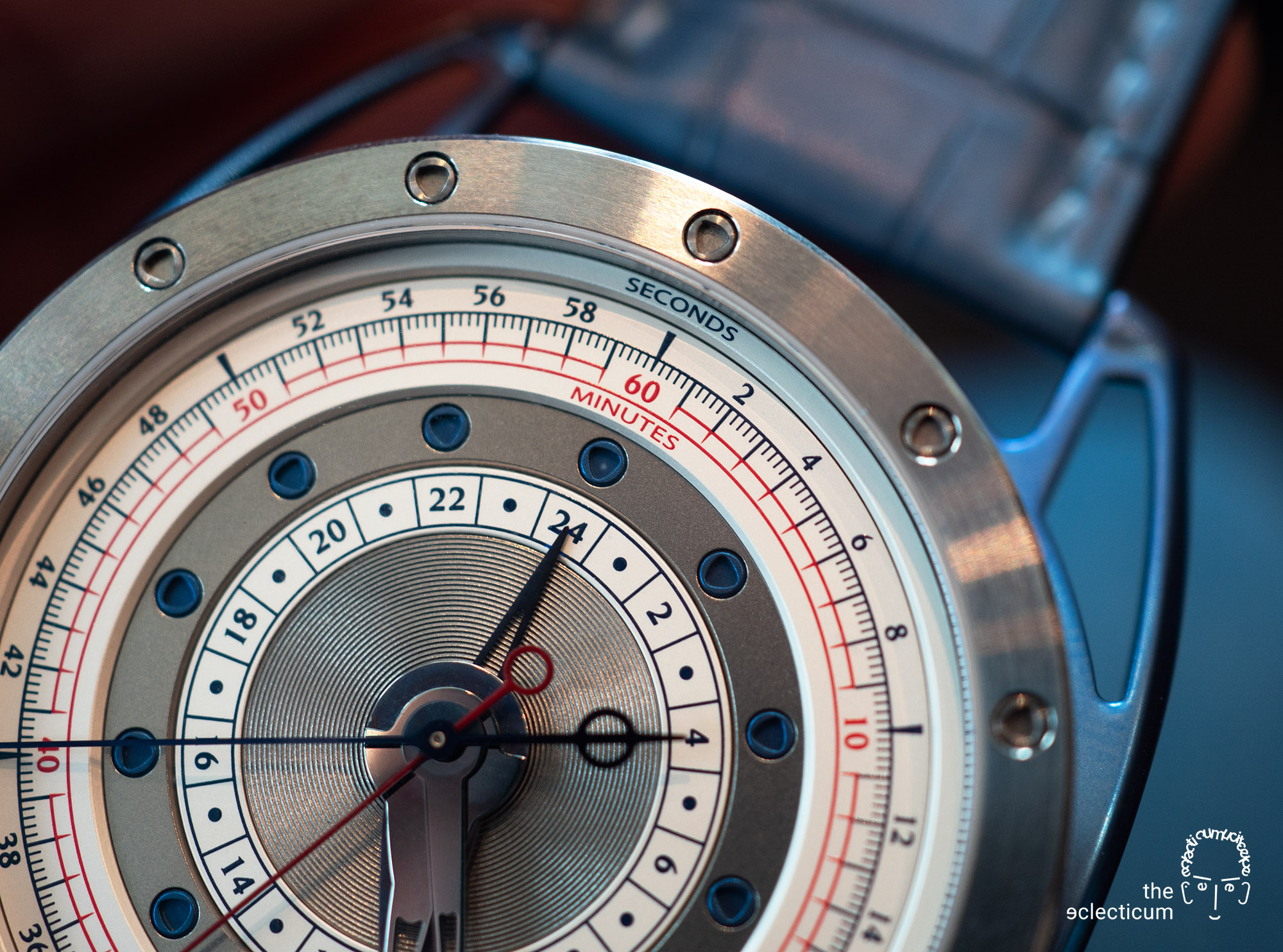 (The new/old dial of the DB21RE) The movement appears to have stayed untouched, at least there is nothing which would indicate otherwise, and thus it remains a beauty and a technical marvel concurrently: 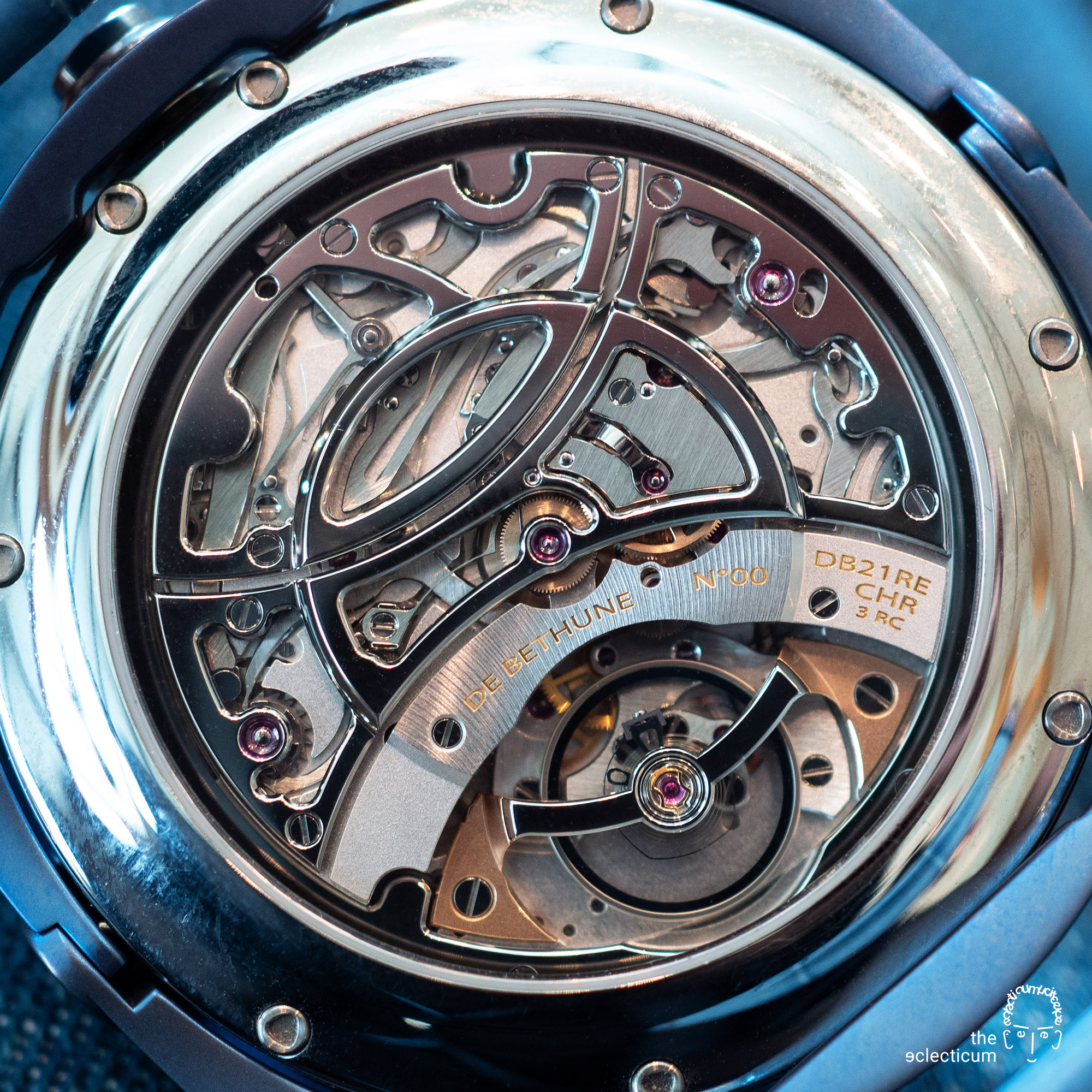 A testament to the evolution of a rare species

So here we are, having discussed the evolution of a magnificent watch, a watch which belongs to a really rare species of chronographs – those with a stack of central hands only.

Such central chronographs offer a number of advantages compared to conventional, subdial ones, such as intuitive readout, no obstruction of subdials by time hands plus a number of aesthetic ones (e.g., less clutter and guaranteed no overlapping subdials). 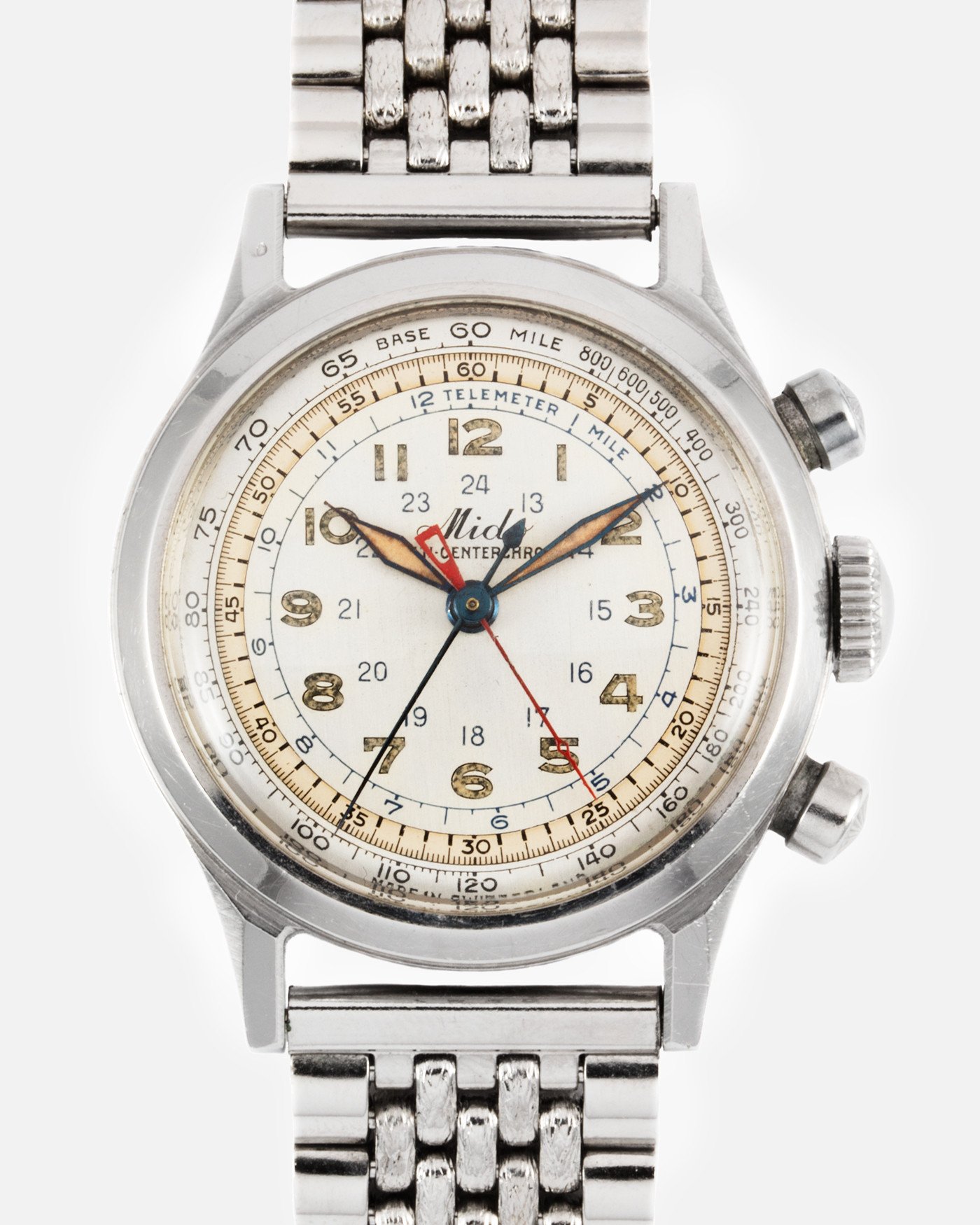 (The Mido Multi-Centerchrono, patented in 1939, was the first commercial central chronograph wristwatch. Image © S. Song Watches) Today, only a few on the market, and if we are strict here and exclude the Sinn, there are essentially two left: The Fabergé Visionnaire Chronogrape and the Singer Reimagined, both based on the fantastic AgenGraphe movement by Jean-Marc Wiederrecht (which is technically perhaps a notch or two ahead), and the subject of this article, the DB21RE.

(The rare breed of central stack chronographs; from left: Sinn EZM-10 (central seconds and minute counter, let’s just forget the subdials), Fabergé Visionnaire Chronograph, Singer Reimagined Track1, De Bethune DB21RE MaxiChrono Réédition) There are a number of reasons why so central stack chronographs have not (yet) taken off:  They might be more involved to manufacture and adjust (I mentioned the cannon pinion already), but I also think there is an inherently human factor in this: people mostly appreciate what they know and what they are used to, and these are the subdial chronographs. And finally, watches are no tools anymore, since a long time, and therefore such practical considerations are of less importance to customers.

You guessed it: unconventional chronograph solutions are difficult!

Nevertheless, such superior (from a utility point of view) chronographs are being developed, and De Bethune have gone a long way in improving and perfecting the MaxiChrono. In my view, this is commendable and speaks volume of the sincerity of the creative genius which Denis Flageollet undoubtedly is, and to the importance he assigns to his creations – they have to be right! 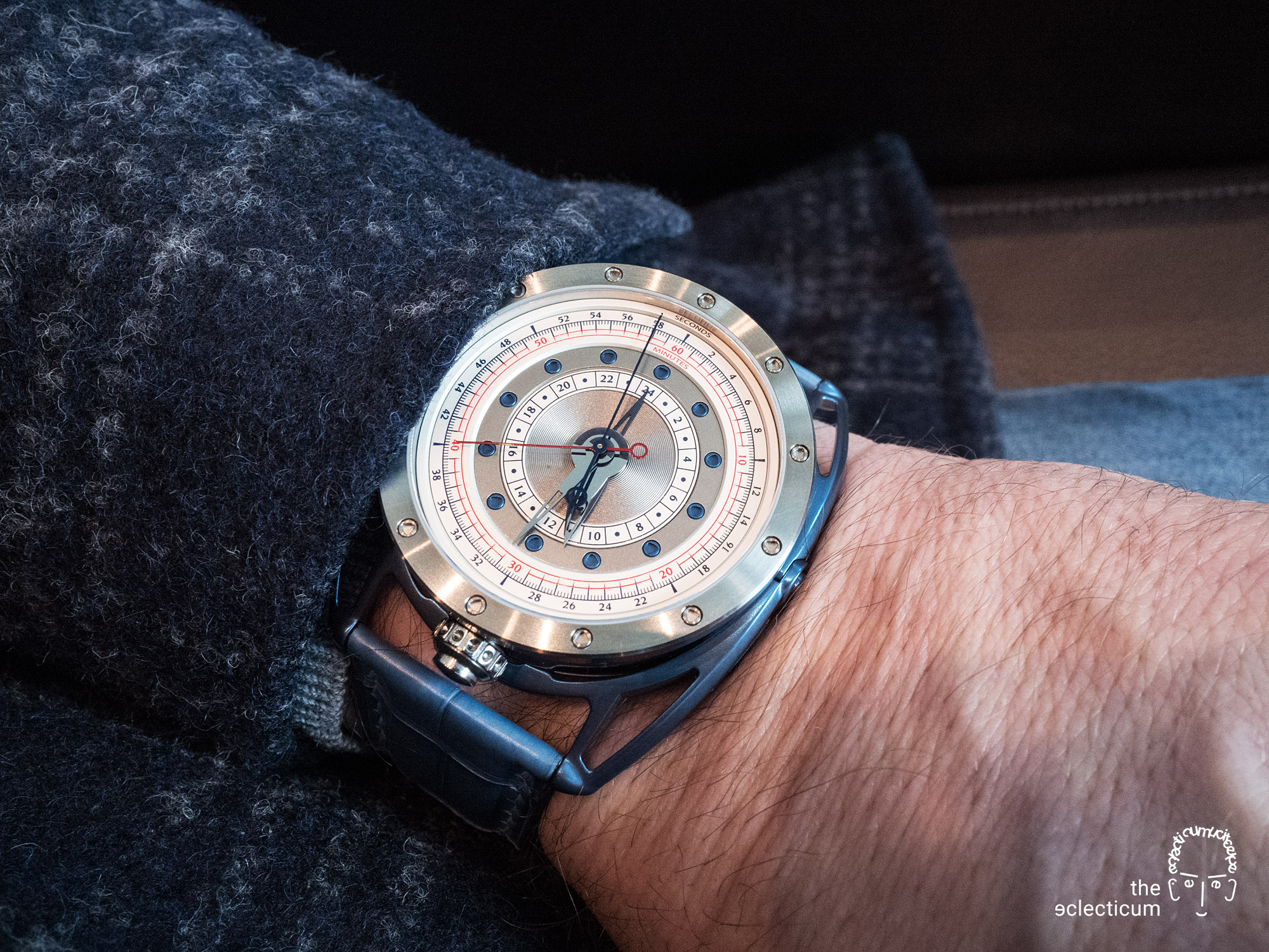 (The De Bethune DB21RE MaxiChrono Réédition on the wrist…) The choice today is between the most recent DB21RE MaxiChrono Réédition, the sportier, practical instance of the two, or the DB28, the more gentlemanly, more elegant version. I personally have a softer spot for the latter, also, because in my view the aesthetics during the time of Davide Zanetta as president of the company showed so much class and refined taste.

Both are chronographs at a very high level of execution, technically at the apex of current watchmaking. They are made for seasoned collectors and produced in low numbers only, which even more so makes me appreciate the years of thinking and improving spent on the movement. 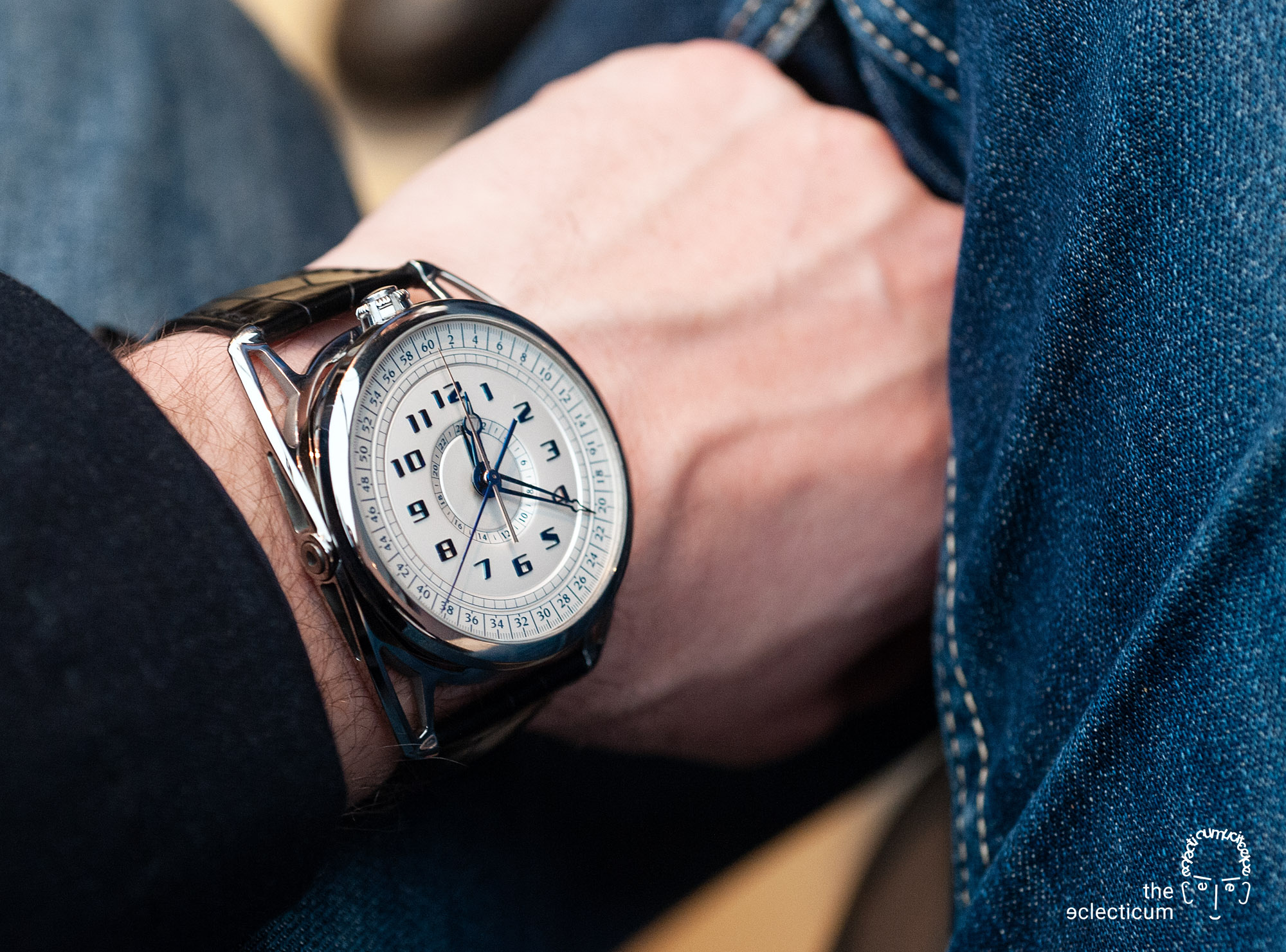 (… compared to the De Bethune DB28 Maxichrono) To acquire one means to patronise genius and artistry, outside-the-box thinking and the conscious acceptance to face obstacles.